After Four Decades, Lucio Fontana is Back in the U.S. and “On the Threshold”

The Met Breuer has brought Argentine-Italian artist Lucio Fontana back on American soil with his first U.S.-based retrospective in more than 40 years. Challenging a viewer’s experience with the environment surrounding them, the Met’s exhibit “Lucio Fontana: On the Threshold” puts Fontana’s iconic paintings in a wider context with his other creations, ranging from sculpture to installations.

When Fontana comes to mind, one often thinks of his famous slashed paintings from 1958, recognized as the Cuts (Tagli). These extremely recognizable canvases feature unique slashes, which are Fontana’s symbol and are associated most significantly with the postwar era. Fontana is recognized primarily as a painter; however, through the Met Breuer’s novel exhibit, a viewer can explore Fontana’s works, ranging from starting his artistic career as a sculptor to his manipulation of environments.

Recognized as one of the most innovative artists of the 20th century, Lucio Fontana’s array of works argues against the traditional artistry of paint-to-canvas and, instead, experiments with space and environment. Max Hollein, Director of the Met, states how “Fontana radically expanded the picture plane into a third dimension. His groundbreaking approach represents a seismic moment for 20th-century art.”

It’s important to emphasize the meaning behind Fontana’s Tagli paintings; they’re not simply canvases he took a knife to. The subtext is a strong commentary on Fontana slashing through the surface of history, forcing it to open up a door to another time and spatial dimension. 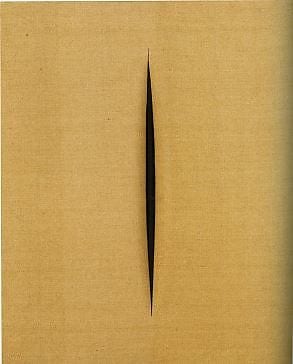 As the founder of spatialism, an artistic movement created in 1947, Fontana purposefully synthesized color, sound, space, movement, and time when approaching his works.

When first entering the exhibit, a viewer enters a space solely dedicated to Fontana’s sculptures and ceramics. In the beginning of his career, Fontana focused immensely on situating sculptures and reliefs made of plaster, terracotta, and ceramics. Favoring a realist stance, Fontana created sculptures of women’s heads in detail. The first of these creations a viewer lays their eyes on is Portrait of Teresita. Crafted in 1990, this work is a mosaic sculpture of a woman. The orange hair against the stark, shiny gold material stands apart in contrast to the sculpture’s blue eyes and vivid red lips. The meticulousness Fontana exhibits in crafting this mosaic is exemplary of his strong attention to his craft and his aim towards specificity.

Following Fontana’s sculptural creations, one immediately views his most famous works, the Cuts. Considered Fontana’s most iconic works, Fontana’s radical gesture of creating a gash through a canvas was viewed as an act of sabotage to the discipline of traditional painting. When creating the Cuts, Fontana had perfected a technique: he applied paint uniformly to a canvas, and, while it was still wet, slashed the canvas with a Stanley knife. Once the paint dried, Fontana would then model the gash with his hands. Finally, Fontana made sure the slash stood in place by placing gauze to the back of the cut. One of the Cuts differing from the rest is Spatial Concept, New York 10. Created in 1962, Fontana utilizes a large sheet of copper with cuts and scratches across the polished, bronze surface. In comparison to his other Tagli works, such as Spatial Concept, Expectation created in 1968, New York 10 is one of Fontana’s works where he leaves the traditional artistic environment of paint-to-canvas behind and brings into a viewer’s space materials often used in mass-production.

After one views the Met’s immense collection of Fontana’s Tagli, a viewer finally has the chance to literally place themselves into one of Fontana’s carefully constructed environments. In the 1930s, Fontana became interested in the relationship between artists and architects. Through exploring this relationship more, Fontana discovered new technology and how he could expand a viewer’s artistic experience into the fourth dimension. Created in 1967, Fontana’s Spatial Environment in Red Light places a viewer in a labyrinth space of hallways and walls infused with red, neon light. The viewer has the chance to not just stand still in the constructed environment, but also walk through it. The saturated effect of the stark, red light blurs the walls’ definition and, ultimately, makes a viewer become a part of the environment itself. Constructed using painted wood, glass tubes, neon lights, and mixed media, Fontana provides a viewer an alternate experience to that of simply standing in front of a canvas and examining it.

The Met Breuer’s “Lucio Fontana: On The Threshold” is a not just a viewing experience, but an immersive one as well. A viewer has the chance to explore Fontana’s legacy and understand his gradual movement from sculpture to the manipulation of environments. This exhibit is on view at The Met Breuer until April 14, 2019 and is most definitely one you do not want to miss.