Betty Tompkins (b. 1945) is an American painter who has been working since the late 1960s. Now some of her most well-known work, Tompkins’ ‘Fuck Paintings’ depicting photorealistic imagery of genitalia engaged in sexual acts were largely ignored and censored by institutions for nearly three decades. In the early 2000s, Tompkins’ paintings began to garner a newfound following, which led to gallery exhibitions and international recognition as well as a larger appreciation and understanding of Tompkins’ full body of work. Currently, Tompkins work is on view in a solo show at Galerie Rodolphe Janssen in Brussels.

Upon viewing your works, one can see why this subject matter is risky. Have you always engaged with risk in your paintings?

I would say so. I grew up in a very different time. For one thing, when I was a student all the artists that I admired didn’t have their first gallery shows until they were in their 40s or 50s. I did not expect to walk out of school and into the gallery system. I expected to spend years in solitude with nothing, so taking a risk was very natural, because nobody cared anyway. Nobody wanted to see it [my art], so I just did what I wanted. And I’m still doing that. 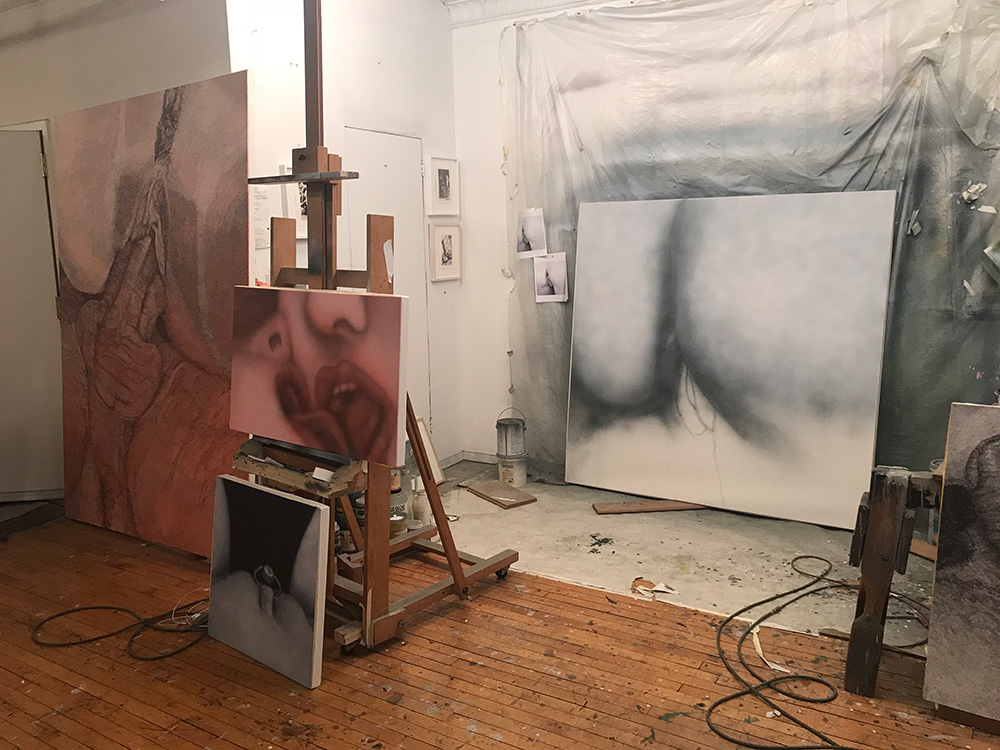 Can you recall a moment when you realized that the human body and issues that were quite feminine, would be something you homed in on as subject matter for you work? 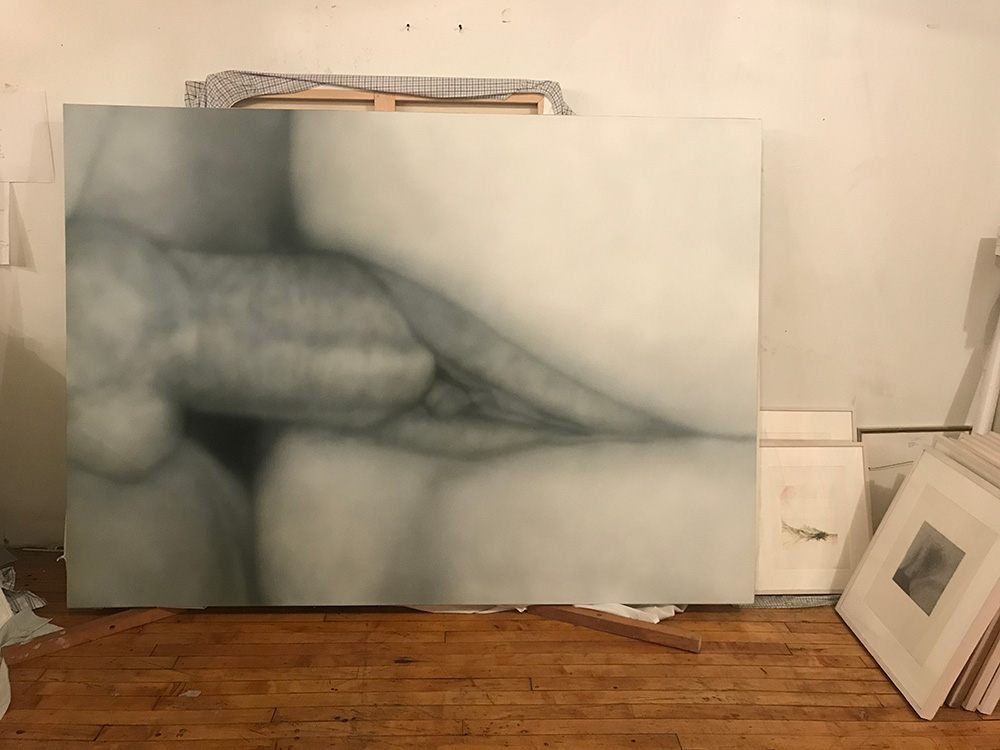 You knew that people would be interested in viewing these works, however, they didn’t get a chance to for a really long time. How did this make you feel?

I was surprised and not surprised, shocked and disappointed. I was in a couple of group shows in the 70s, then my work got censored going into Paris. After that, I couldn’t even get into a group show with these paintings. Nothing. In those days there were no solo shows for women. My first solo show with these paintings was in 2002 with Mitchell Algus Gallery, which took a long time since I did the first one in 1969. [laughs] At the time, I had plenty of female role models: Louise Nevelson, Louise Borgeouis, Lee Kranser, Elaine de Kooning. It wasn’t so much in my face how male the art world was, which is really weird, you think I would have picked up on that. I was totally naïve. 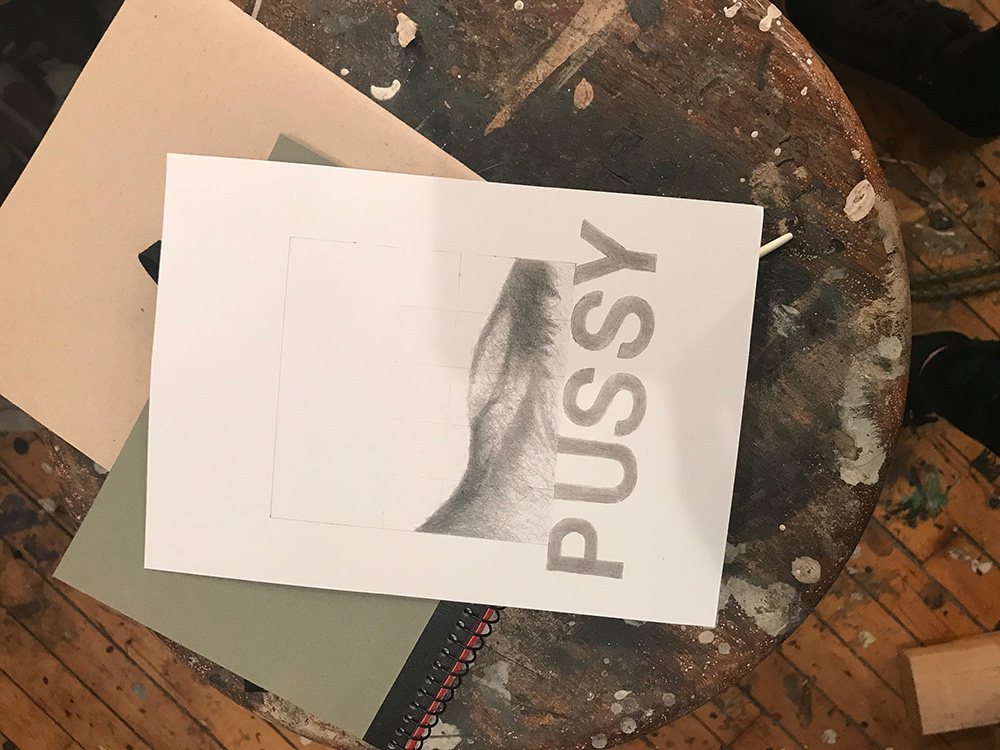 It’s hard to accept the inequality as fact until you’re faced with it head-on.

Right! I didn’t have to deal with it. It was so male-oriented it wasn’t even an issue. It was before feminism. After moving to New York and starting the ‘Fuck’ series, I thought what I was doing might be important. I became acquainted with certain dealers from my frequent gallery visits and though I knew I didn’t yet have enough work to show them, I would ask, “When I’m ready – which I’m not yet – may I bring my slides in?” They would say, “We don’t show artists your age, come back in 10 years when you’ve found your voice.” Over half of them said to me, “Don’t come back then, we don’t show women.” When I look back I think how was I not crushed by this. I thought it was liberating. I would think to myself, “Ok great, they’re not interested, I’m just going to go home and make my paintings for arts sake.” 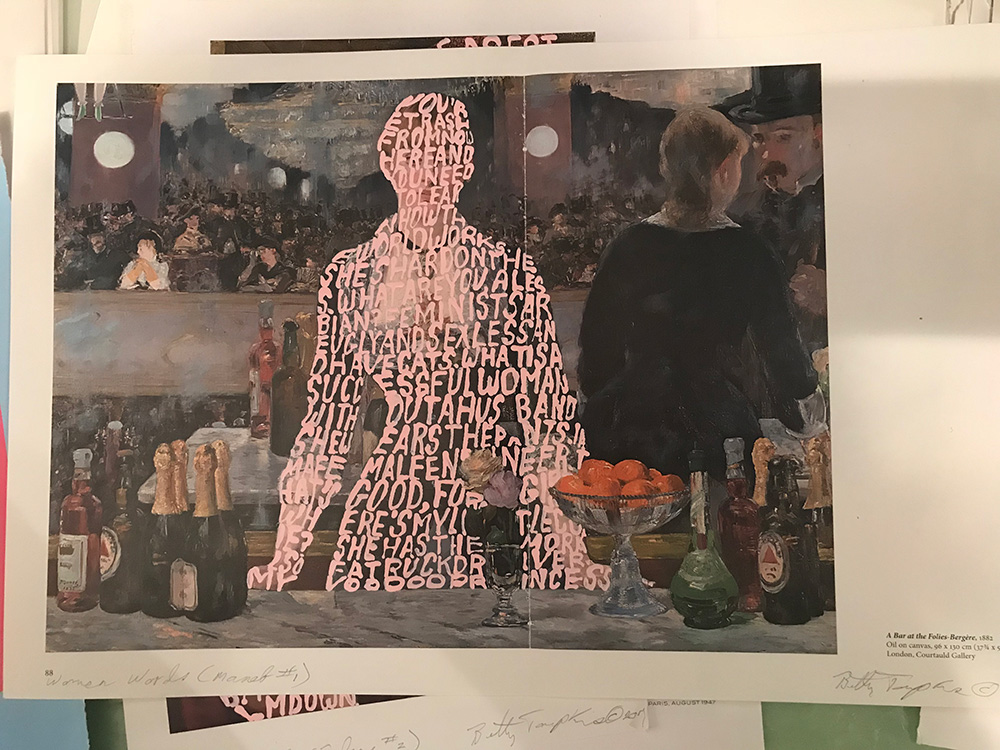 Do you think if a man had produced the same body of work that the censoring would have happened?

[Laughing] I’ll never know. When I was in my late 20s, I used to beg my husband to take my slides to galleries for me. He refused to do it. He was teaching at NYU and thought it would look bad and didn’t want to take the chance. So, I actually will never know. At that time, I was getting an extraordinary level of rejection. By then I was 28/29 and I thought, “This is a nice body of work, I’d like people to see it.” And I did manage to get into a couple of group shows and then – nothing.

What happened between this period of time up until 2002?

I did other things. At a certain point, I got another idea. It had to do with language, which has now crept back into my work. I started to do pieces with defining nouns. I had more success with those. Not huge. But some. Eventually, I stopped doing that. I had a show with a dealer who should remain nameless and it was a very bad experience.

What other ideas have you explored in your work?

While I’ve explored different things over the years, I need the painting to work on an abstract level, I need the painting to work equally as well on subject matter level. If I can do that, I can get a good painting. I have a curious wandering mind and eventually other ideas occur to me. I can do them if I’m passionate about them. With my painting, I’ve worked myself into a big circle and worked my way right back in it. Which was a curious thing to do, and it was curious how the language part also kept coming up – a painting I made completely with stamps – it’s all language. So that was one iteration of it. The ‘Women Words’ were another iteration of it. I used language when I was a student, it was very Pop Art, to use lettering in that way.

When I was younger, if I got another idea, it would mean that I say no to whatever I was doing in order to say yes to this new thing. As I’ve gotten older, I realized I don’t have to do that. I can just keep saying yes. And that’s what I do. And one of the things that I’ve really enjoyed the last 5 years is having two ideas or more going on at the same time. Sometimes they overlap, and they fold themselves into one piece, sometimes they stay separate and develop on their own track. I find that really engaging. One of the things I’ve realized, one of the challenges to any artist is how do you continue to stay engage, how do you continually refresh yourself as you age? I introduced myself to really embracing risk and failure and what it was about was taking chances. 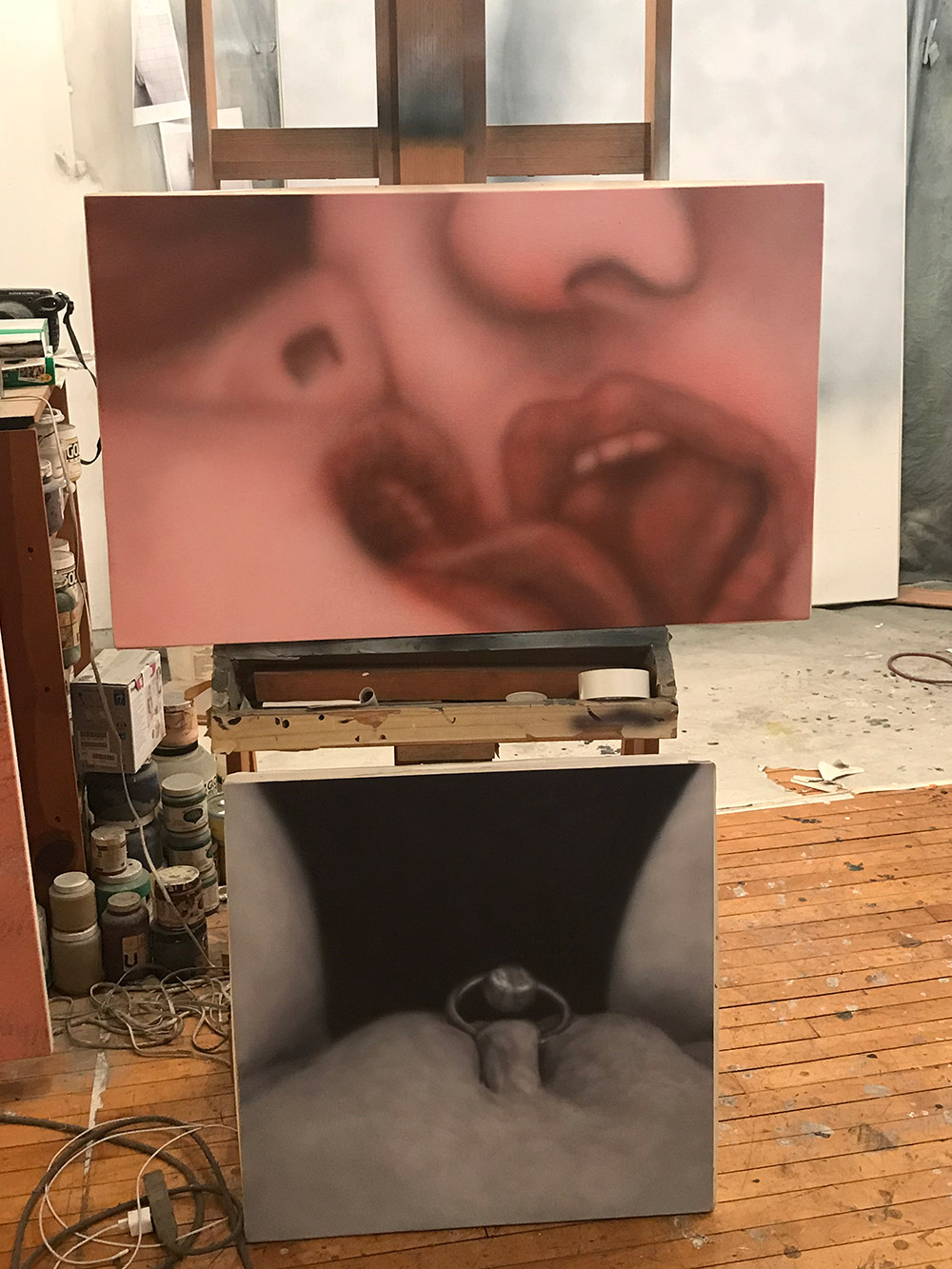 Did the resurgence of your work in the early 2000s change your practice at all?

The recognition was nice. It was really nice. Does it influence me? Do I do something to get approval? No. Never. If I were going to sell out I would’ve done that before I was 30 and I would have made a very nice living. I would occasionally meet commercial artists, who do 50 paintings a day for a hotel or an airport or something. I just couldn’t figure out how they could stand to do it. Even when I’ve been broke, money is not a motivation for me.

How do you see your work fitting into today, where females have claimed a front seat in the debate of equality of the sexes and have found their voice in speaking out in instances of assault?

I think it’s all incredibly important. When ‘WOMEN: Words, Phrases and Stories’ was on view at FLAG Art Foundation and then at Gavlak Gallery in LA, one of the things that we did at both shows was include a wall that explained how I got the idea for the piece and how I got the language – that it’s not my language, it’s everybody else’s thoughts about women that were submitted to me. We had cards and markers, so people could add their own. A lot of the stuff was very strong of course, but also some of the most incredibly misogynistic – anonymity really can mask misogyny like you would not believe. I started to photograph them and put them up on social media. I was thinking this idea might have nowhere to go until one morning that I woke up and I thought Art History. Art history is pretty much a history of men. I started ripping pages out of Art History books and then everything started with Harvey Weinstein. I’m reading these accounts and I couldn’t believe – my ideas and timeliness have never so hooked-up. This was probably the only time in my life that this will be happening, it’s so incredibly timely. 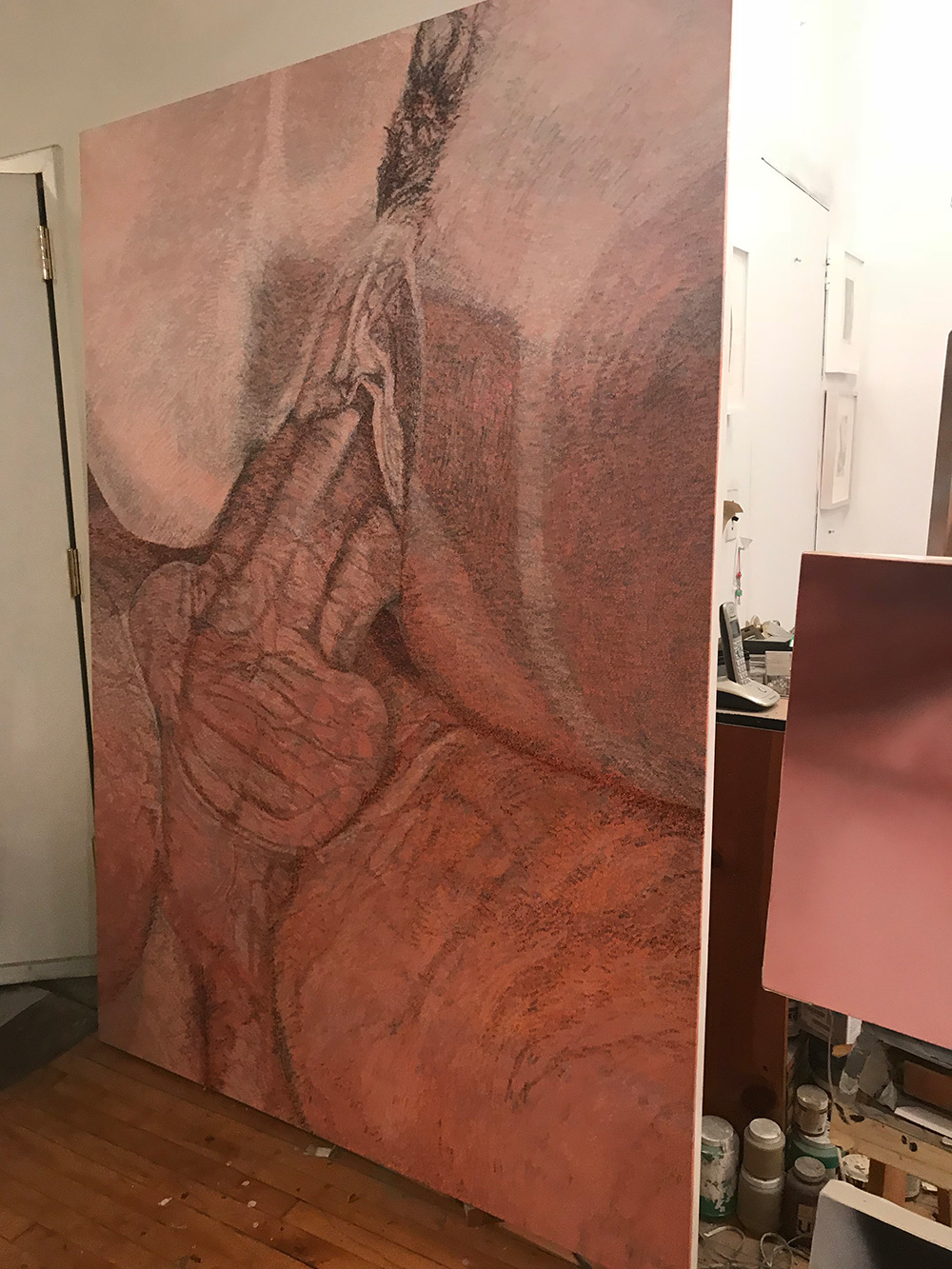 It’s almost as though your subject matter has a contemporary relevance in 2018.

[Laughing] Yeah. Yeah it seems to. And sex is always pertinent. 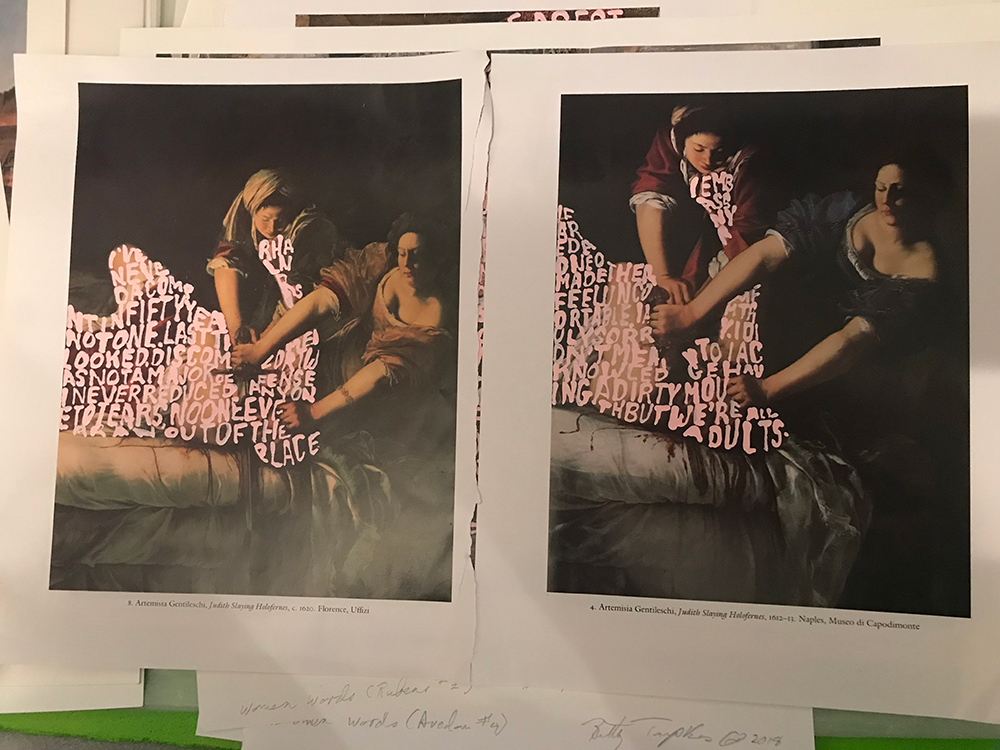 As someone who has been a feminist pioneer since you started painting, do you think this moment in our culture will start to translate into the world of art beyond your work. Do you think other artists will start taking risks that you’ve been taking/addressing subjects that you always have?

I hope so. It’s all I want all artists to do. I hate the idea that people leave school and just continue to do what they were doing under somebody’s supervision. I think that’s a comforting position and a limited one. I think that’s what art is – going out of your comfort zone, doing what makes you truly uncomfortable. It’s something that I hope everybody in the arts will go to at some point.

I’m not sure what will change the landscape. I think all these women so courageously speaking up about their awful experiences will help and I think it takes true courage to do it.

Sally J. Han Steeps Her Work in Culture For All