Drew Miller blends modes of “high” and “low” art forms in a beautiful, crisp way. The intricate details Miller crafts merge together into a harmonious and cohesive total. Inspired as much by comics as he is by Modern masters, Miller has honed a style uniquely his own that spans different materials and mediums. Recently transplanted from New York, Miller now lives and works in New Mexico where he is excited to see his practice grow.

Tell us about yourself. Where are you from originally, what was your experience in art like growing up?

I grew up in Spokane, Washington. My brother and I were obsessed with drawing but I didn’t have real exposure to fine art or the idea of art history until I was an adult. The images that really gave me drive came from mainstream comics. The hyperbolized figuration captivated me and I started copying that stuff when I was young. In high school I found more advanced cartooning in alternative publications and classic strips like Gasoline Alley and Krazy Kat and at that point I was pretty sure that I would be a cartoonist. At some point I started learning about Philip Guston and how Krazy Kat influenced him and that was a big segue for me. My interest in fine art really grew from there and I started composing images that no longer relied on stories and time. 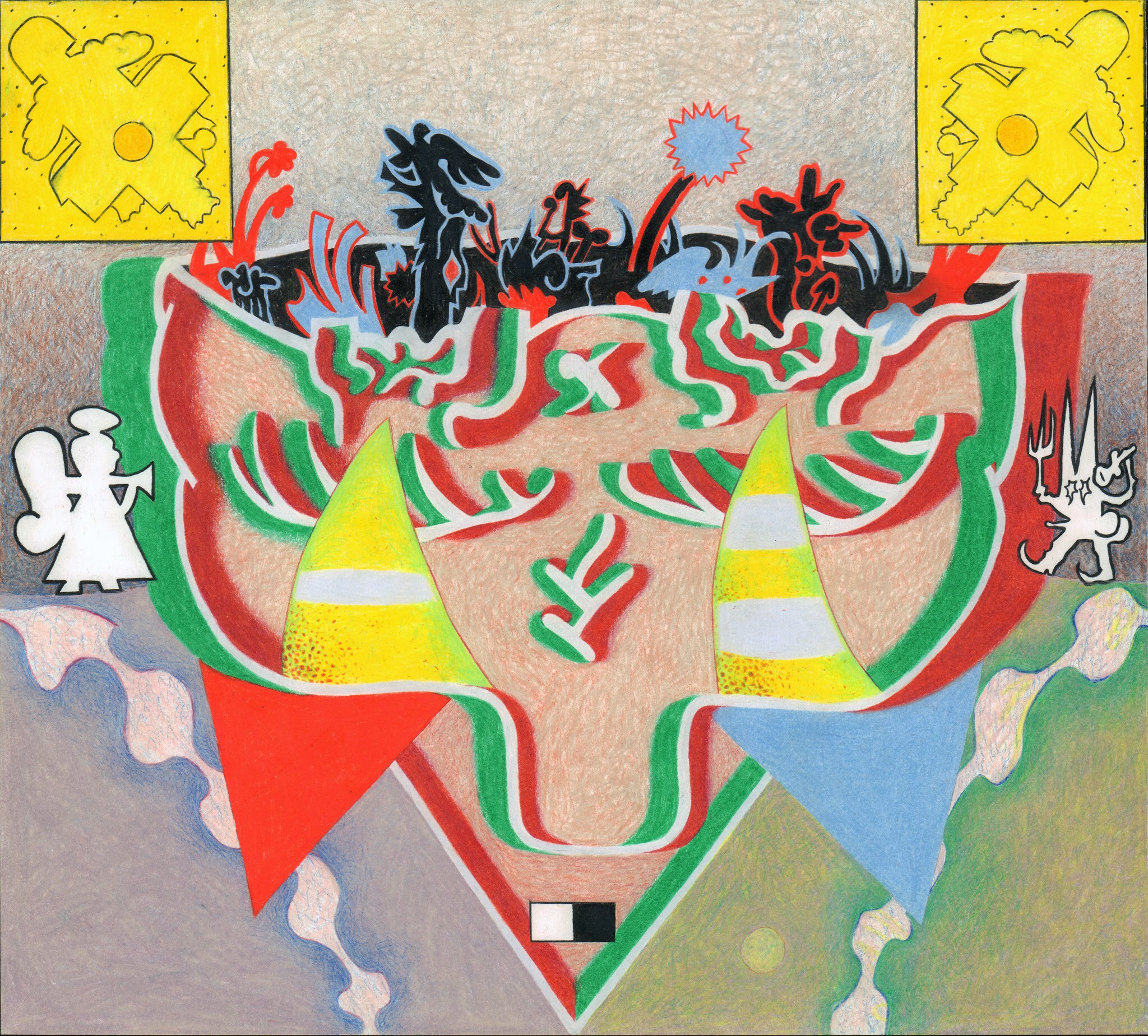 When did you begin to create in your current style?

I grew into it slowly over years of flipping back and forth between making comics and straight-up drawings. At some point I realized I wasn’t attached to storytelling anymore. I took what I liked about cartooning, which had something to do with refining an image into an icon or glyph… I continued to do that but started thinking about how I could apply it to the broader context of painting and drawing. I think my process crystallized in that way in the past few years

What is your process like? Does an idea for a work come at once or is it more of a gradual process?

It’s pretty slow. I usually don’t settle on a line drawing to work with right away. Sometimes I go through old sketches that I had forgotten about and pull out quick little ideas that I passed over before. I love trying to insert those informal bits into larger more careful drawings. Since I can work on something for several days or weeks I have the opportunity to bring fresh eyes to it each sitting. I’m constantly reconsidering things through the process because it’s slow. My headspace can’t be clear enough to nail an idea in one session. A more interesting drawing can come from a composite of different moods and attitudes over many days. 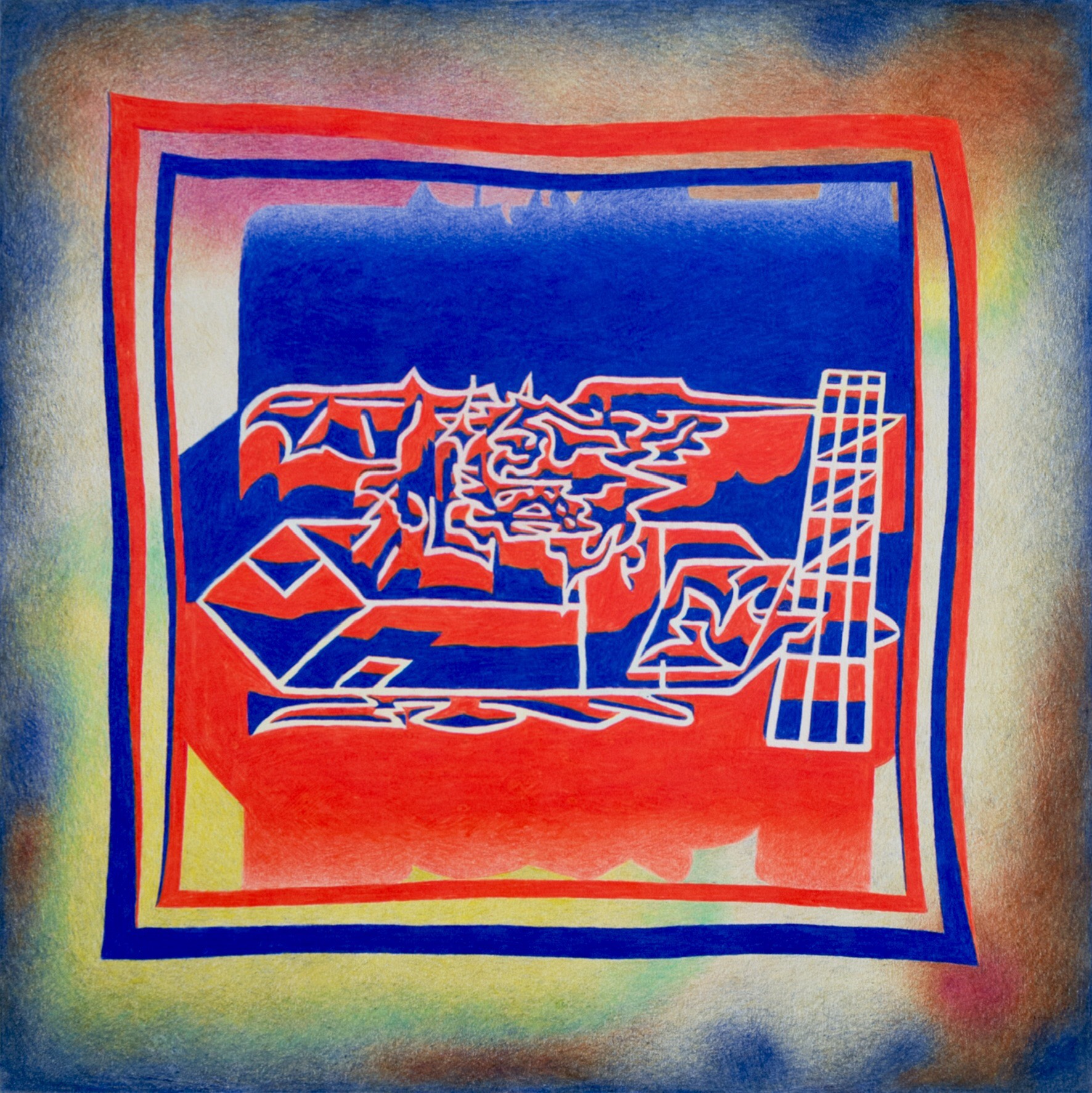 Lately, I’ve been getting excited by noticing all the different ways drawing exists around me. Just driving down Route 66 near my house in Albuquerque I can see all sorts of beautifully shaped, decades old signs from for motels and restaurants. The contours of these Art Deco relics are completely wacky. Subtly undulating lines meet jagged saw-tooth edges with outlines in bright neon lights. In the same drive I also find myself stopping to admire the work of local sign writers. There are a lot of pros here, true masters of layout. They can execute any number of typefaces in a few graceful strokes to make signs with so much warmth and personality. It makes me feel hopeful to see such a rich legacy of calligraphy and drawing that still has a purpose in the community. I’m always looking for drawing ideas in my environment, that gets me thinking about what to do next in the studio. 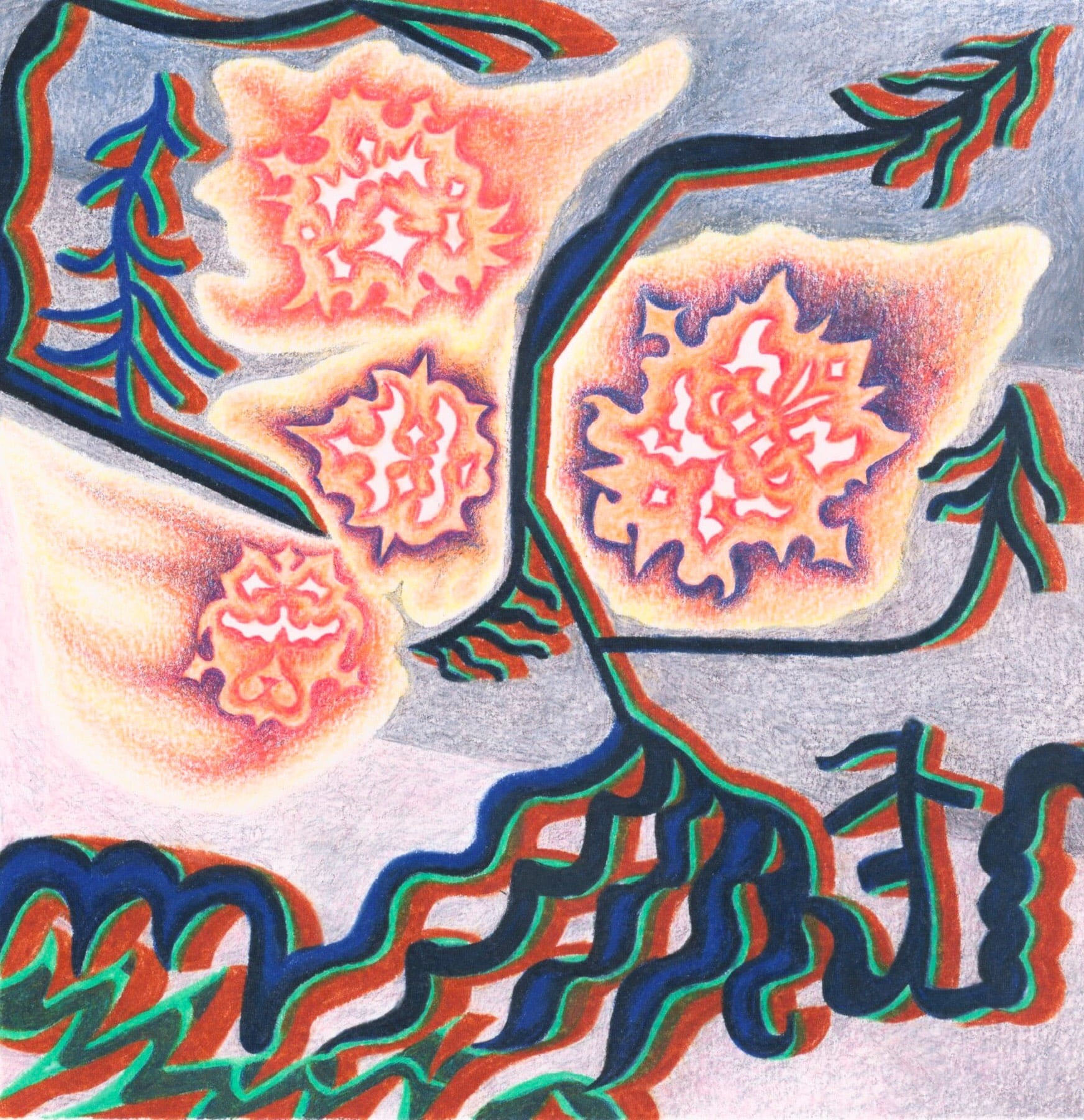 I keep returning to these artists lately: 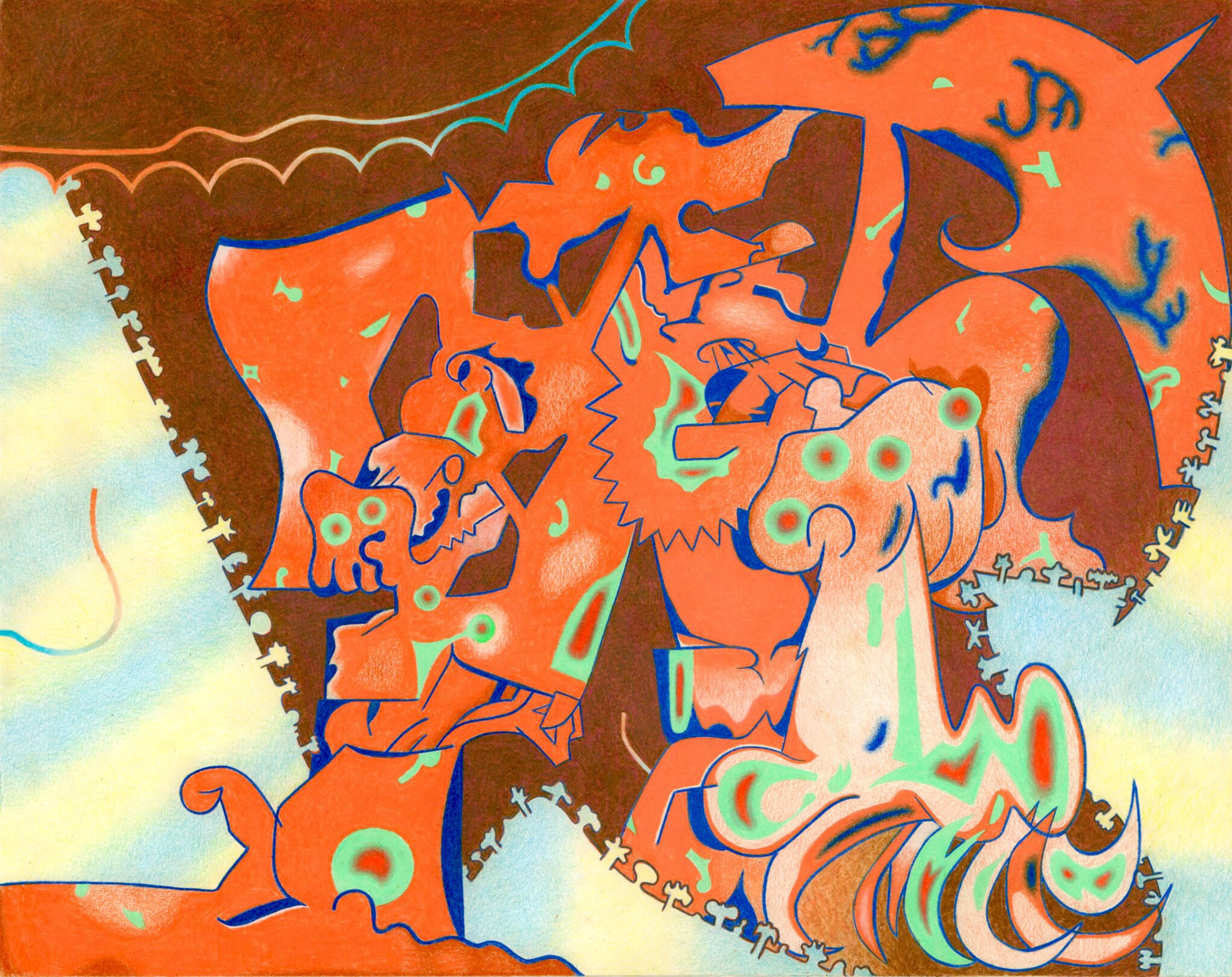 What do you try to capture in your work?

I want to balance and arrange different types of line-work in the service of holding color relationships. I love getting into a kind of vegetative process of composing with personal and borrowed visual icons, tracing them a lot until the original drawing has been mutated and cannibalized. That first step is about editing and reforming the drawing until it becomes a mixed-up clone of its previous self. Along the way I stay attentive to notice opportunities which only a specific drawing could yield for color activation. It’s about developing an interesting skeleton in which colors can vibrate against each other. 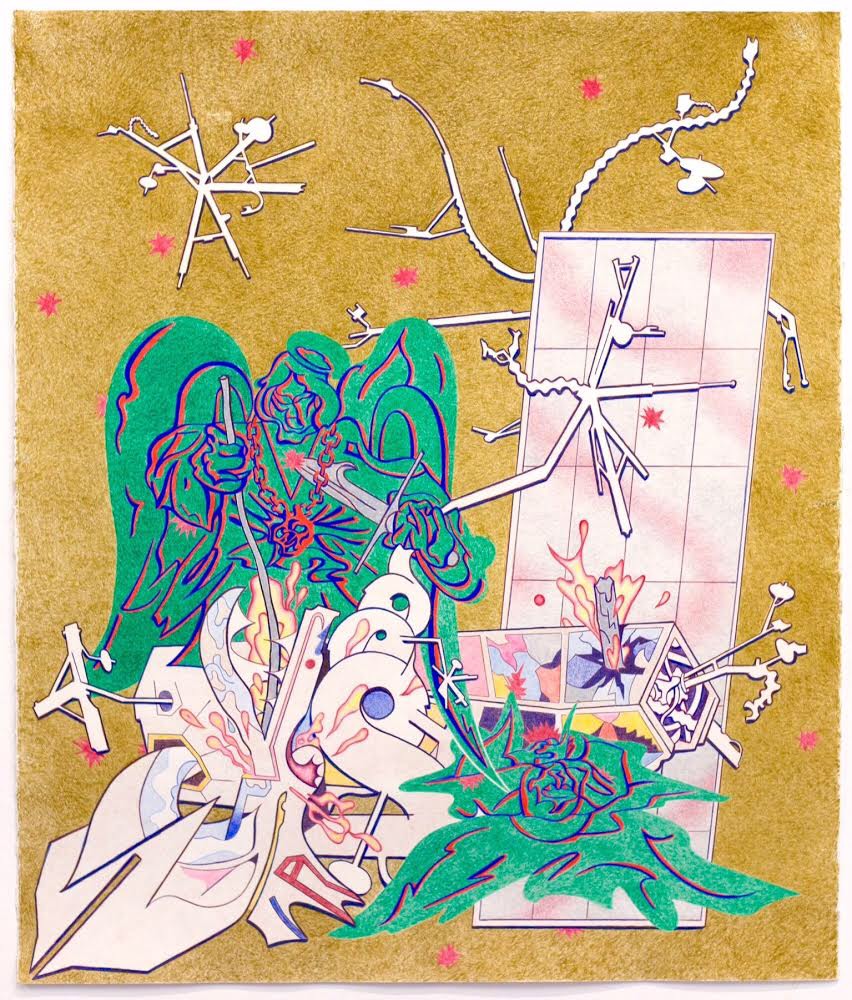 You recently moved from New York out West. How do the two art worlds compare?

New Mexico feels really set apart from both New York and the west coast. I can afford a large space to paint here and I can go hiking in a beautiful place easily. I can’t go to The Met and look at El Greco or visit an endless district of commercial galleries, but it is the only place I can look at Mimbres pottery, use an extremely cheap ceramics studio that is just down the street and eat $1 tacos. There is a rich history of amazing artists who moved to the Southwest from New York and LA, but that art world they created here is not quite accessible to the public like in the big cities. Professional artists seem to move here for privacy and solitude and a lot of their work isn’t shown here very often, it goes to big cities to be shown. New York was not a place I could afford to have serious momentum in the studio. It was perfect for looking and absorbing. I brought that energy to New Mexico where I can use it with a clear head and a nice space. 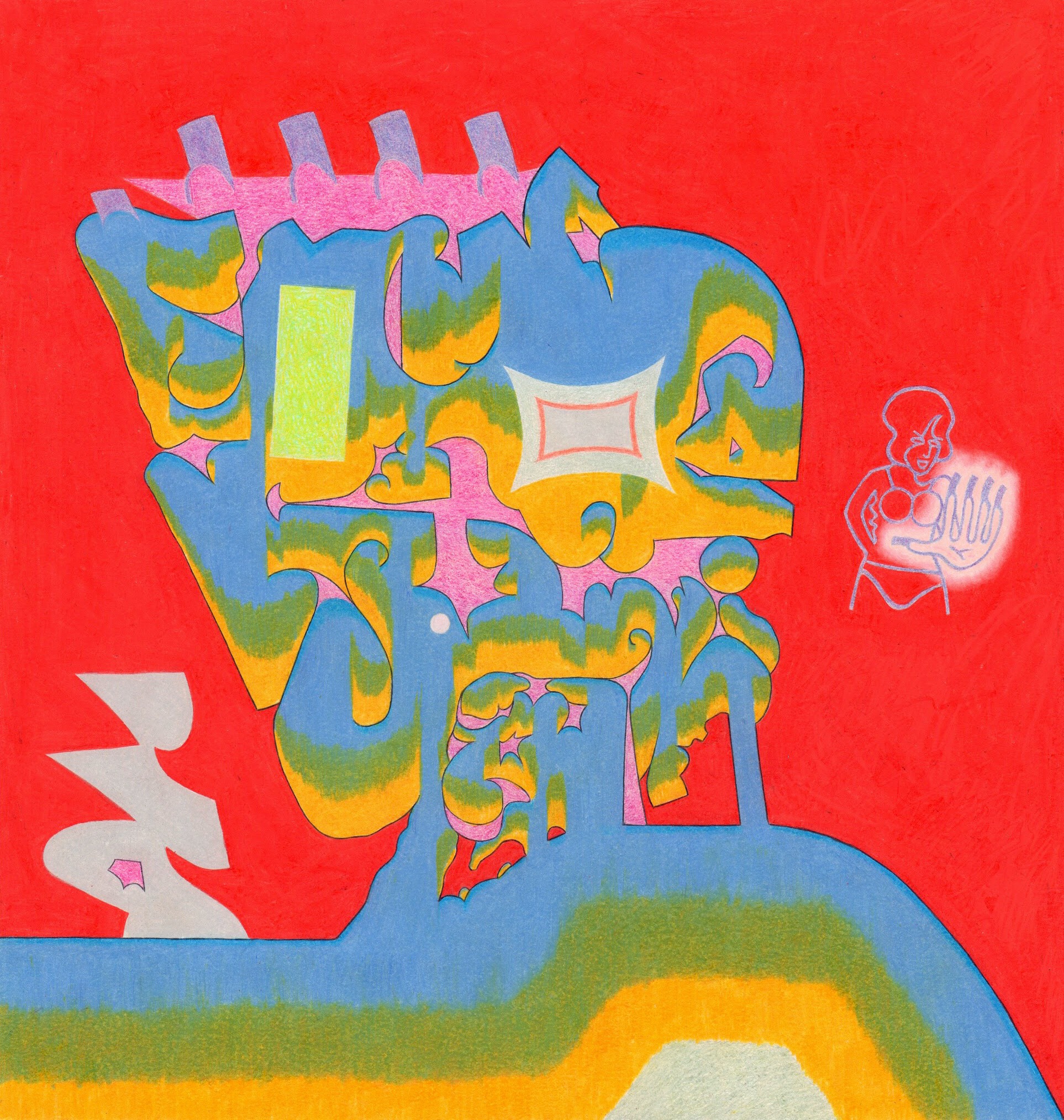 What’s next for you? What are you excited for this year?

I’m excited about some shows coming up this year for me in the Southwest, New York, and Seattle. The things I work through in drawing are happening on a large scale right now in my paintings, I’m thrilled to develop that. I’m also really forward to a restoration project at The Museum of International Folk Art this spring. I am part of a team that is restoring a large part of the designer Alexander Gerard’s collection of Folk Art objects. One day I’ll be working with ceramic mermaids from Mexico, and by the end of the week I’ll be cleaning a group of miniature carved demons and angels from around the world. I get to load my brain with the most freakish iconography all day, it’s an absolute treat! 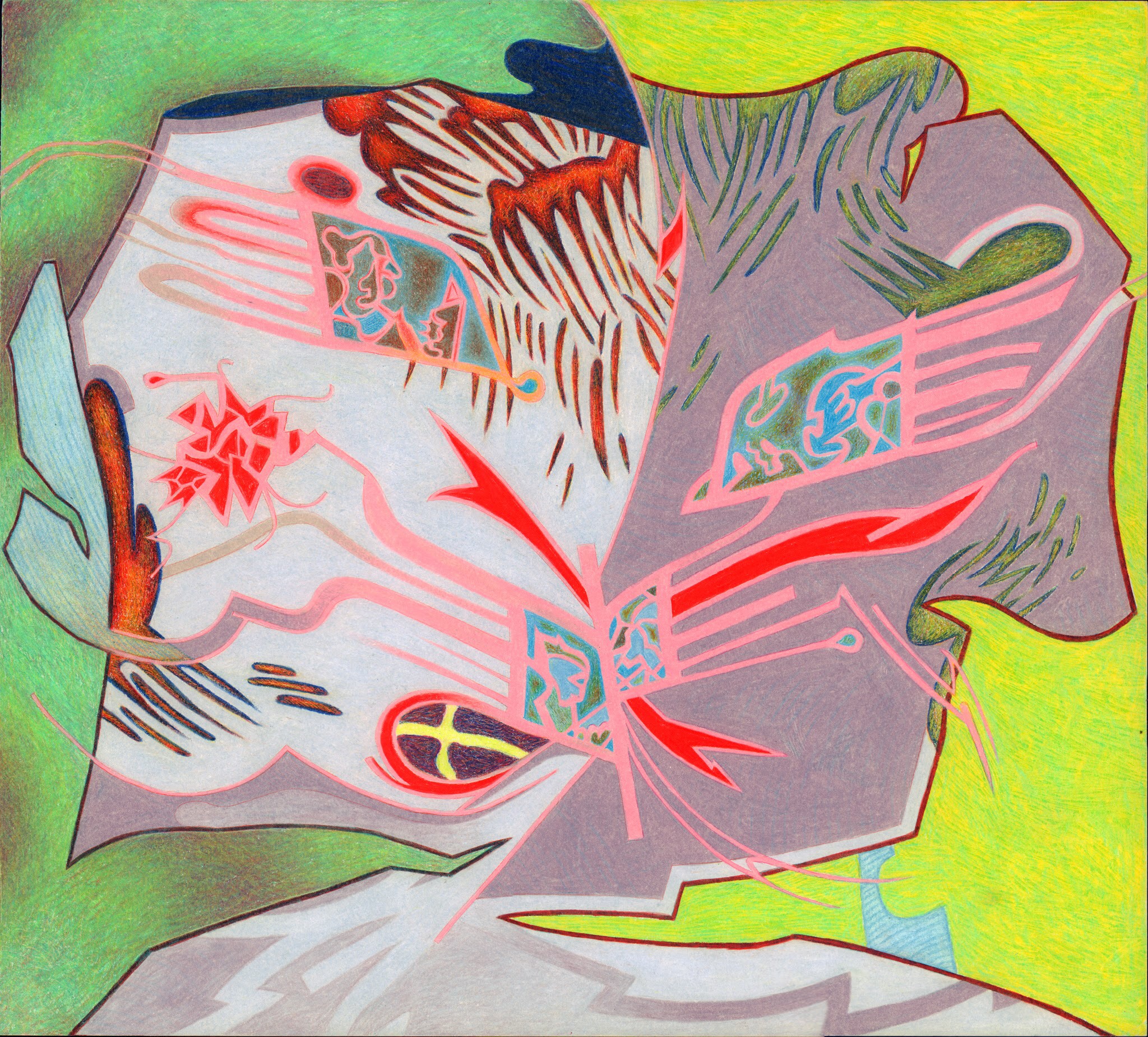