We reached out to Cristina BanBan during this time of social distancing and were lucky enough to have her open up about her artistic process, her life moving around the world, and her dedication to painting from a very young age. Inspired by everything from real stories to human relationships and emotions, her dream-like paintings feature tempestuous bodies. A viewer finds comfort in the liveliness perhaps because of BanBan’s cartoonish, angelic faces. Without a doubt, her works are filled with an energy best described as vibrant and beautiful. The artist herself discusses how “it’s not only an intellectual and emotional process, but a physical one, too.” Out of this exertion comes bodies intertwined in the fabric of the quotidian. Whether her large-scale works include groups or individuals, her style remains constant. It’s an expression of human interaction with the world, more importantly, from the perspective of  a female. She is hopeful and excited about what the future brings. For now, her solo show at 1969 Gallery in New York is still on in May, and it’s definitely giving us something to look forward to.

Where are you originally from and how has art brought you to where you are now?

I am from a town called El Prat de Llobregat about 5 miles away from Barcelona. I’ve been engaged with art since a very young age. At 5, I asked my parents to take me to the local art school. The years I spent there are, without a doubt, my happiest and most vivid childhood memories. The school was driven by artists and had a strong sense of community. People of all ages came together with a shared passion for art. I used to take drawing and painting classes every day for about 12 years until I became a teacher myself at 17. I carried on with it, combining teaching with my studies in Fine Arts at University.

Two years after graduating –  and after the Great Recession in Spain – I moved to London in 2010 with intentions for a change in life and hopes to boost my art career. It took me a few years until I figured out my way. During this time I worked in retail, took a couple different teaching jobs and did few illustration commissions until I found a studio space in East London in 2016. It was then that I started to dedicate infinite hours of myself into painting while still working other part-time jobs. I would say that was the beginning of it all. It took me about two years to accomplish living full-time from my work as an artist. I moved to New York last November and I am now based in Brooklyn. 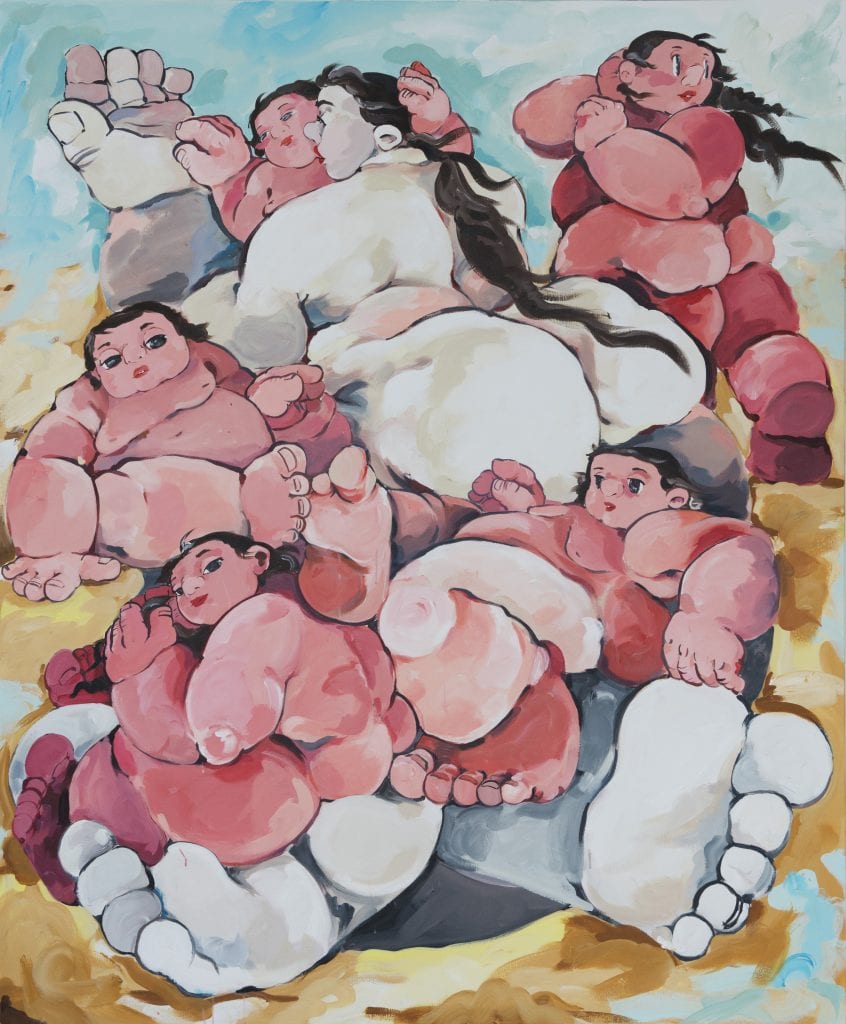 Have you always painted in your current style?

My style keeps changing within each painting and series but the figure remains constant along the way. I am interested in narrative and I find figuration my way of communicating ideas. 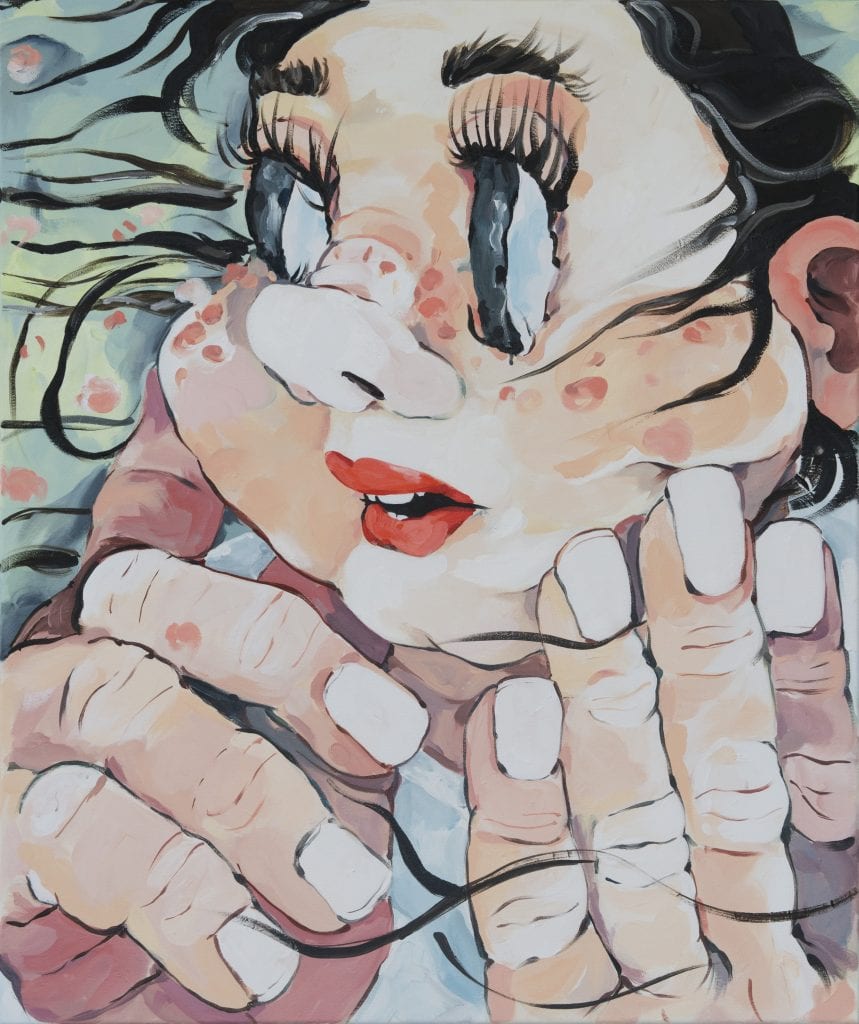 How do you start a work? What is your initial process?

I always try to focus on how I am feeling in the moment – worries I might have or emotions I might be going through. That’s always the starting point. It might be while I’m listening to a particular song, after reading something or feeling inspired by a picture I saw on the internet, after a conversation with a friend or while dancing in a bar that I find something interesting for me. When I’m experiencing that energy, I’ll draw in a sketchbook until I find a composition I’m happy enough with to transfer it onto canvas. The drawing will always be the first and most important part of the painting. I know that the better the drawing is, the better the result will be. Painting, on the contrary, is not planned. I always work with music! 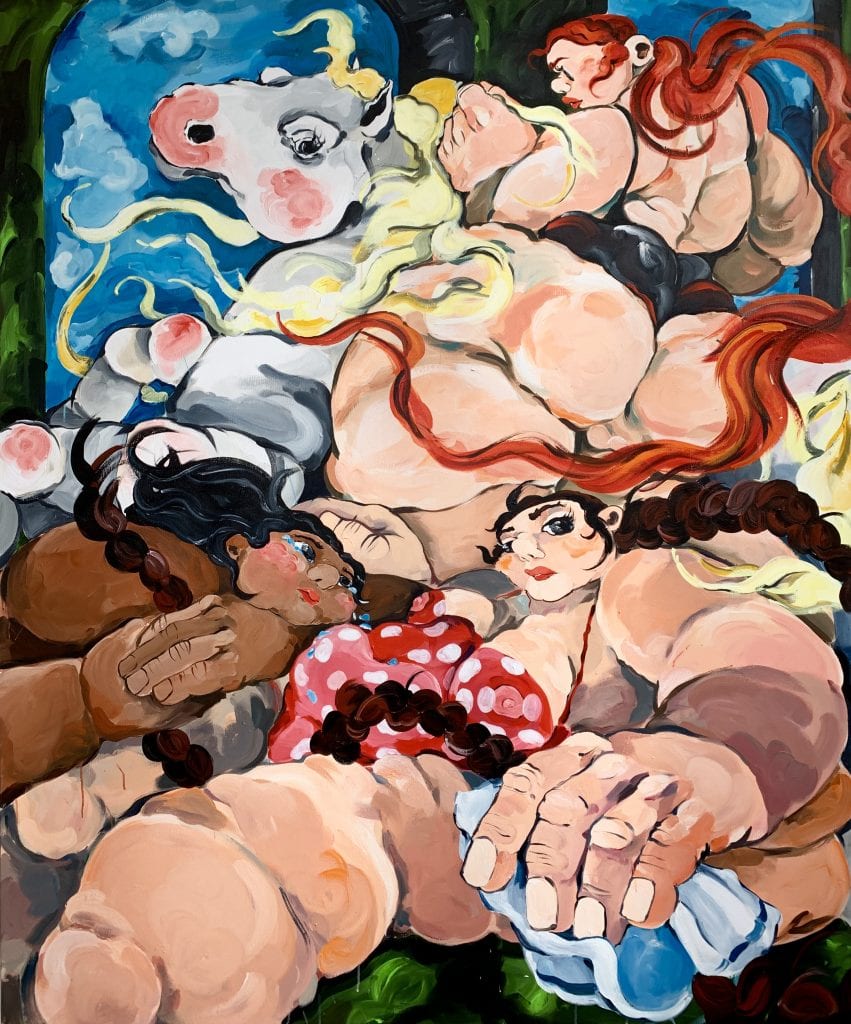 What does a day in the studio look like for you?

I have recently moved studios after moving overseas so that had a big impact on my routine. For now, I don’t want to force myself to have a definite schedule. The only thing I tend to do is to spend as many hours as possible without a break once I arrived in the studio. Sometimes I go in the afternoon after exercising in the morning, sometimes I work 12 hours non stop, other times I start early in the morning. 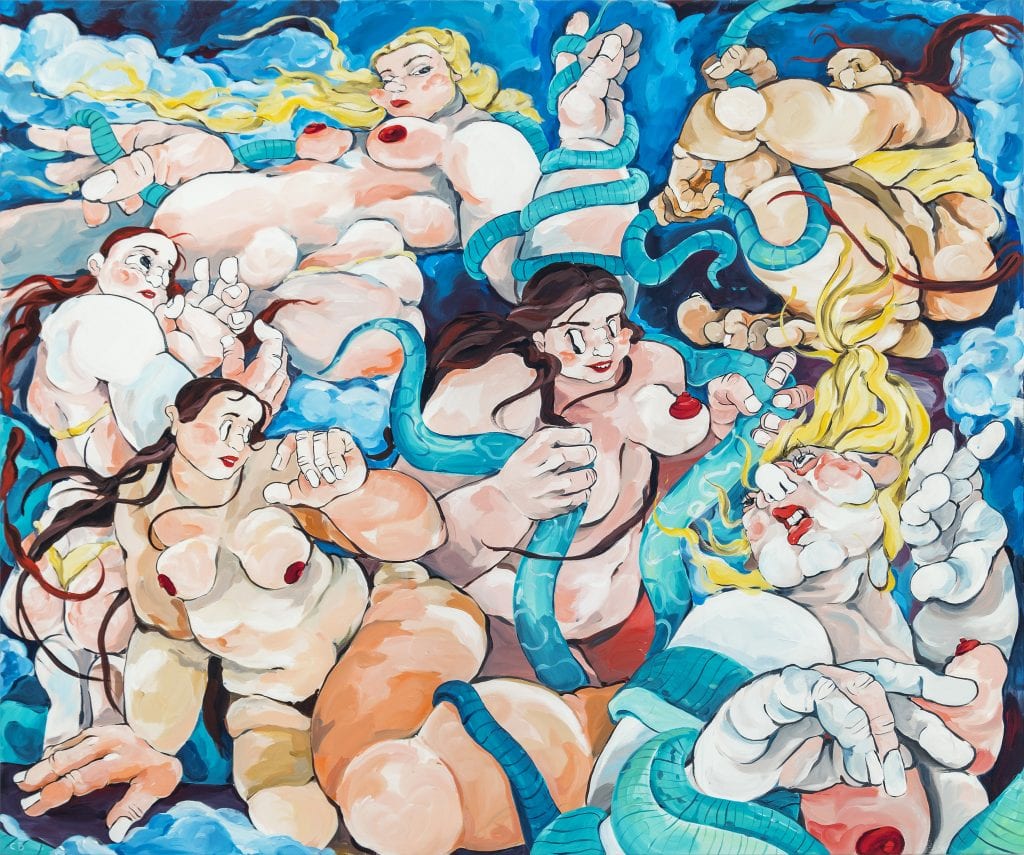 From everything that intrigues me or makes me feel alive. It could be from real stories, or dreams, memories, after listening to a very dramatic song. Mostly about human relationships and emotions. It’s people that inspire me the most. 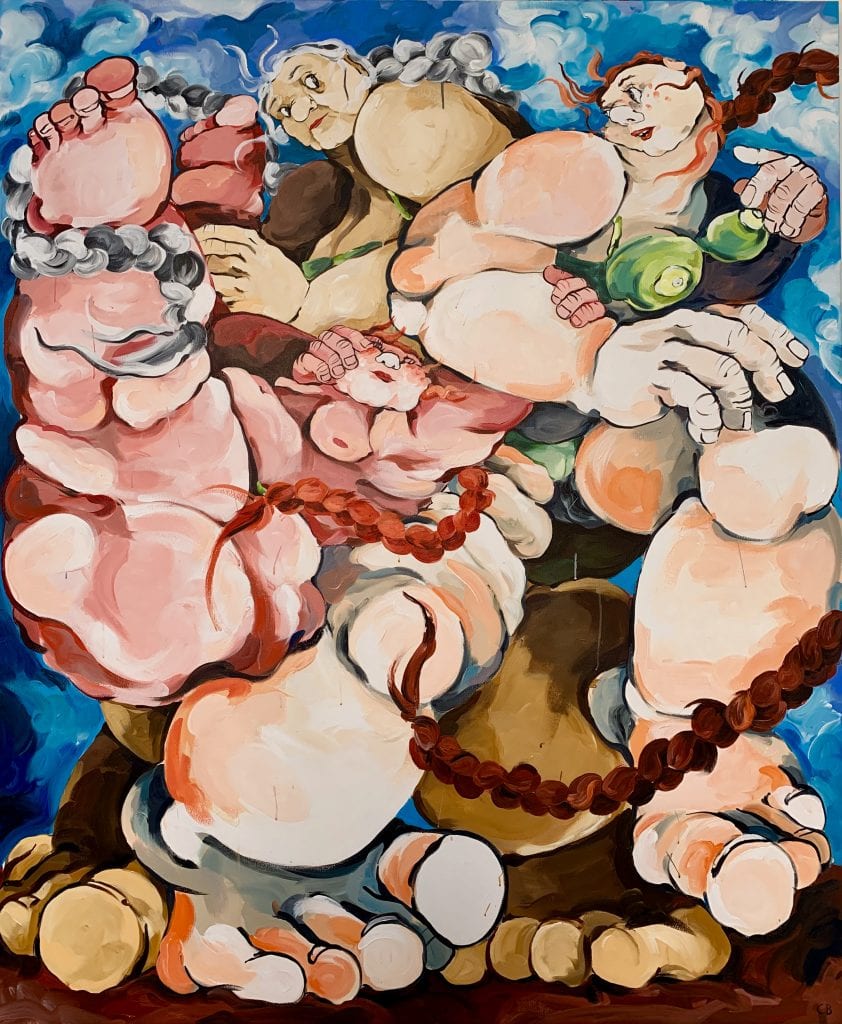 Why did you decide to predominantly depict the female body in your work?

I paint about my own fears and worries and feelings. I filter everything through my own experiences and the body I use the most is a woman’s body. In many cases I put myself in the painting too. 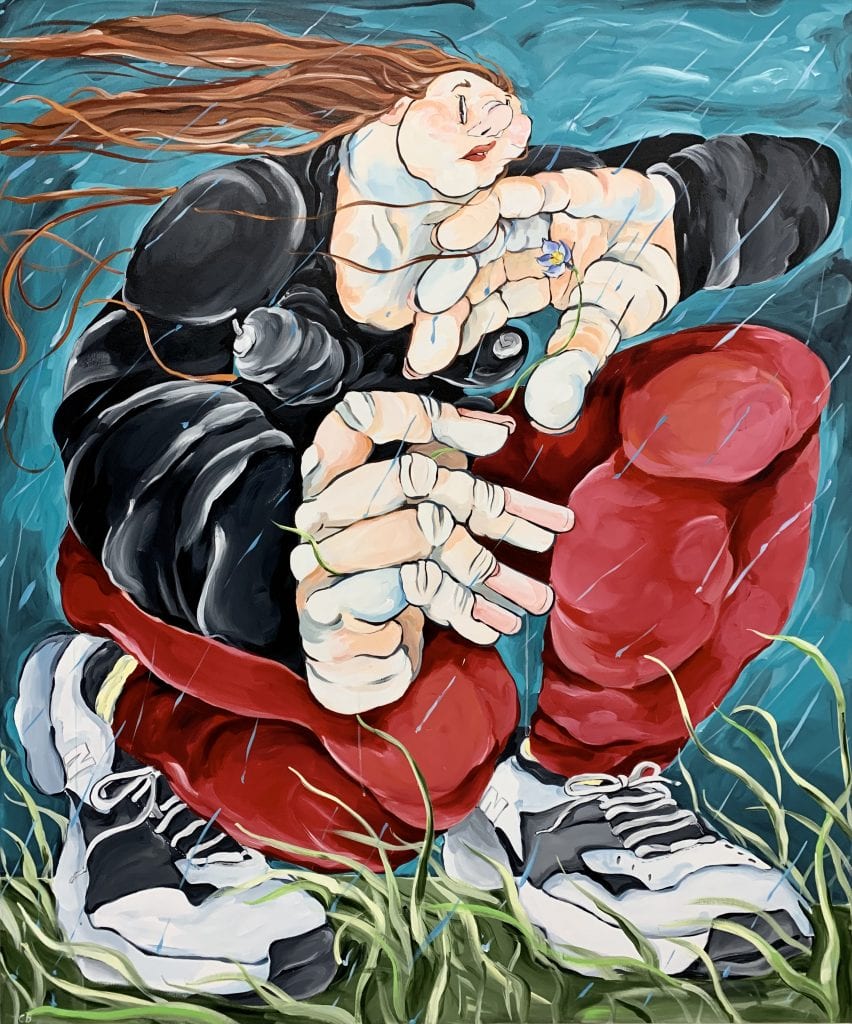 What are some personal challenges you explore and how are they interpreted in your work?

I think everyone goes through private stuff. And then there’s always the social and political climate. Painting helps me canonize big feelings and energy into something tangible. I spend a lot of time with the work, just me and the painting. It’s a time consuming process. For me, it’s not only an intellectual and emotional process, but a physical one, too. I believe that my energy is somehow readable afterwards. 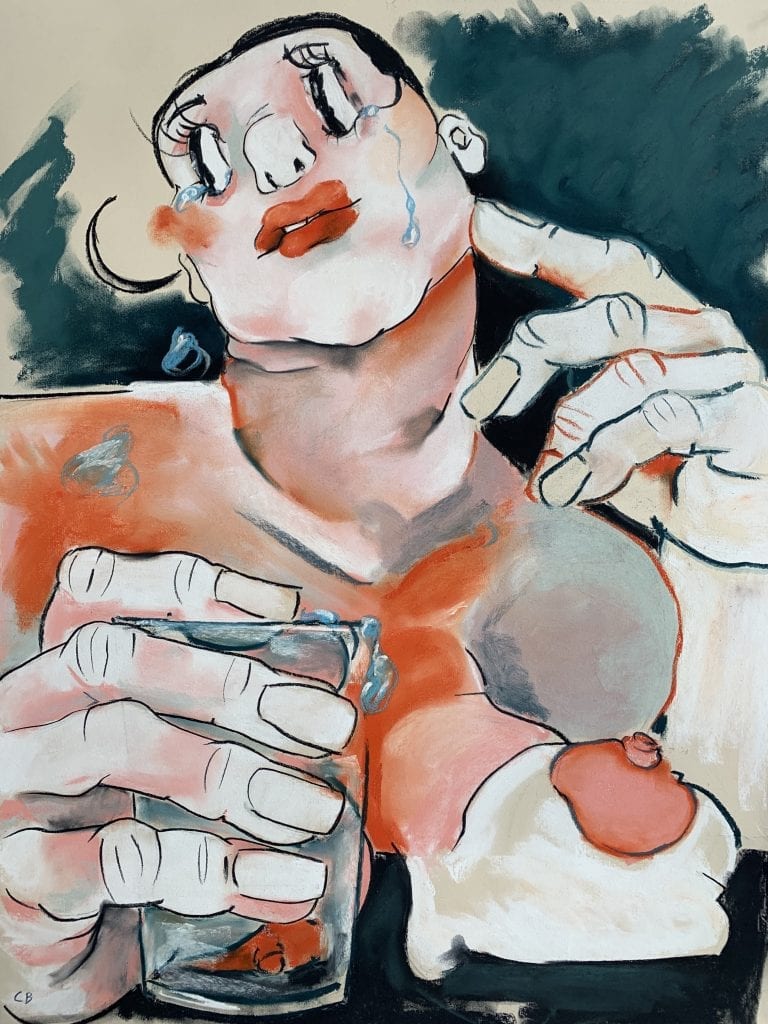 Have you been influenced by any art historical movements or individuals?

It depends. At the moment, I am revisiting the work of Robert Collescat, Magdalena Suarez Frimkess, Otto Dix…But I am also inspired by everyday stories and when I discover new music. Lately, I’ve been playing Roman Flugel and Spoonie Gee in the studio and Kate NV in the evening. 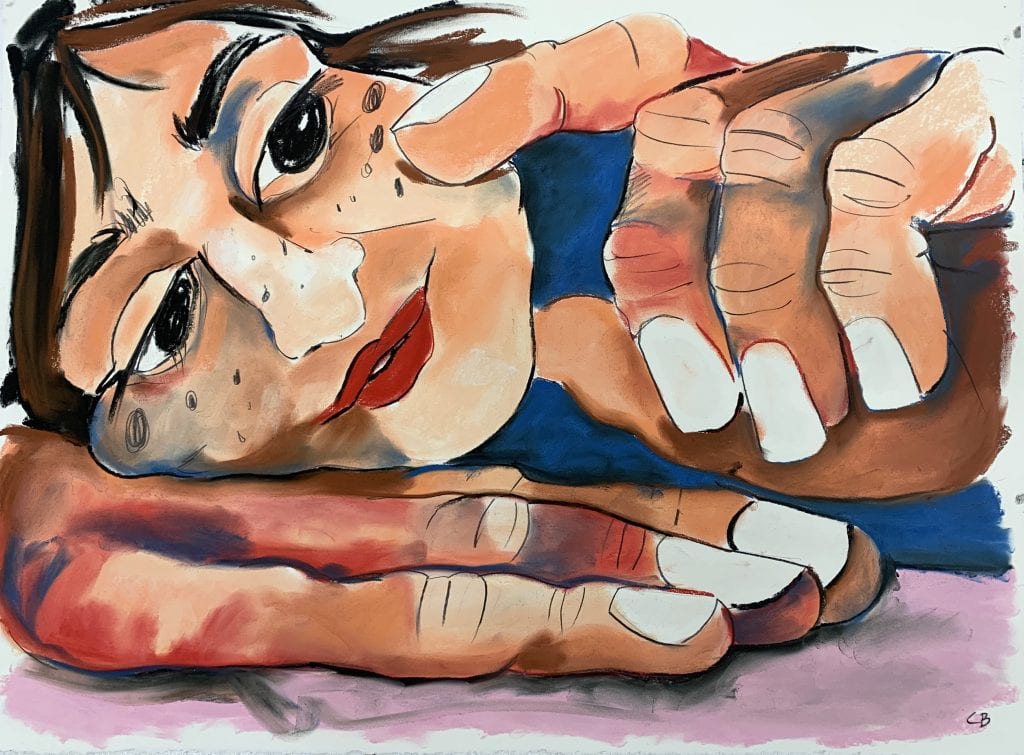 What do you have coming up?

I am writing this in the middle of the quarantine due to COVID-19, an uncertain time for all of us. I’ve had to postpone some shows but we’re aiming to move forward with my solo show in May, which will be at 1969 Gallery in NYC. We may have to adjust and experiment with the format, but we’re exploring all possibilities to make it happen. 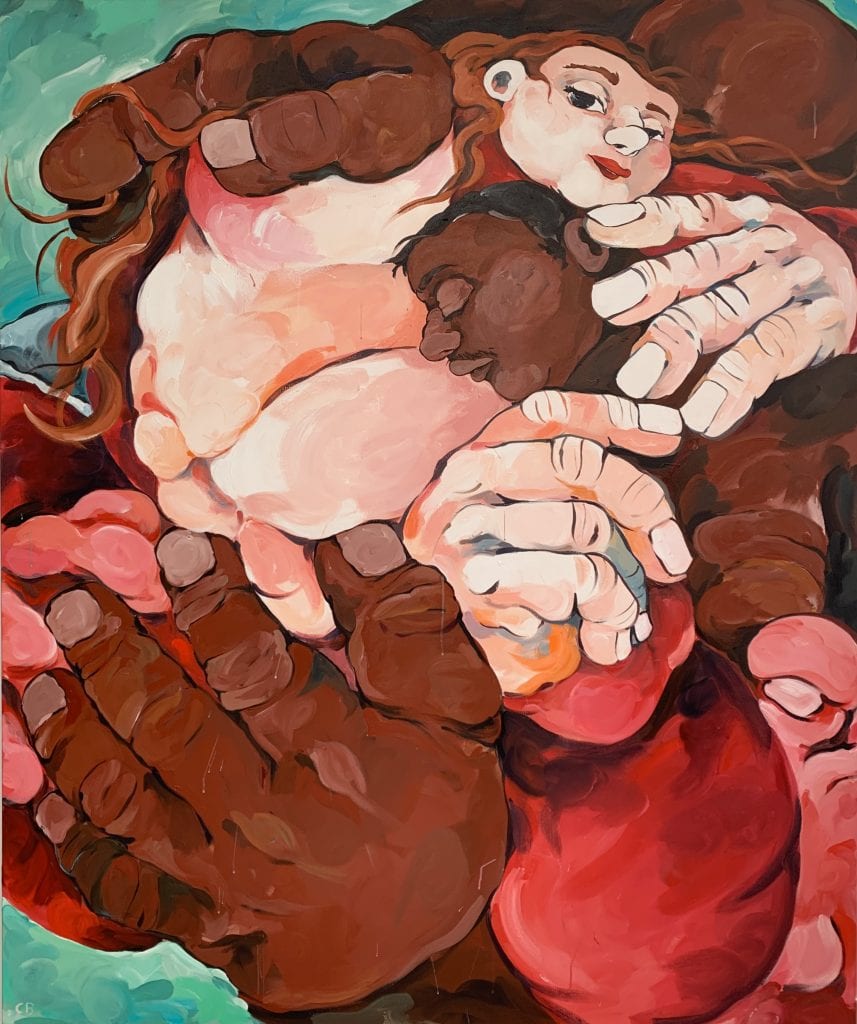 What are some words that you live by?

Today, I will say … to love, to help each other, to appreciate what you have and to stay safe! 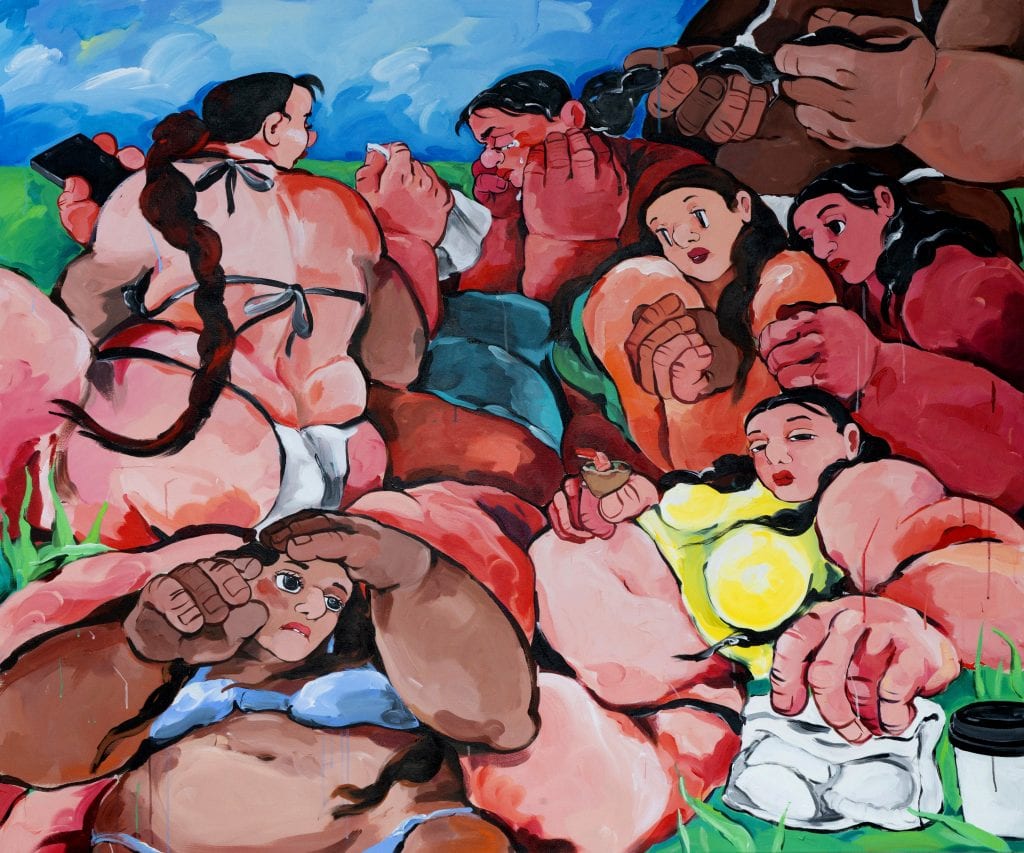