Cristina de Miguel is an artist that’s known for her ebulliently expressive paintings with street art flair. The Spanish-born painter’s mysterious and personal iconography alludes to mythology and allegory, despite rejecting any fixed meanings and interpretations of her work. De Miguel’s diverse range of interests and influences is both eclectic and unexpected; she draws equally from Baroque painting and graffiti. Art of Choice spoke with De Miguel about her childhood in Seville, on the importance of trusting her instincts and intuition, along with how her fascination with universal symbols and archetypes inspired the work in her current solo show at Fredericks and Freiser. De Miguel lives and works in Queens, NY and is represented by Fredericks and Freiser Gallery.

Seville seems like a rather idyllic place to grow up as a painter.

Seville is a great place for painting. The light is very special and shapes the objects in a mystical way. As a child, I would spend long hours by myself in the backyard making paintings with leftover house paint and sculpting clay figurines. There was a freedom to create whatever I wanted, without the judgment of anyone.

Would you say that you continue to be influenced by the art that you grew up with in Seville?

Definitely! There is a lot of history within every wall of the city. This inescapable sense of the past becomes a present murmur while painting. I grew up seeing Baroque paintings in churches. I also still think about the aesthetic compositions of Zurbaran, and the ghostly paintings of the Spanish Caravaggio School. The strong diagonals of the falling figures, as well as their solemnity, made a lasting impact. Those paintings have hung on the walls for centuries, darkened by the smoke of the candles.

You also attended art school in Seville. What was that like?

The art school in Seville was very academic and classical. We painted and drew from live models and classical casts. We were inculcated with a rigorous anatomical study of the figure. These rules served as a springboard for creativity, and made me want to rebel against them, so I began to distort the figure more and more as the years went by.

What made you decide to move to New York?

There was a moment where I realized that I needed to leave Seville and learn something about painting that I could not find in that mental enclosure. I thought that New York would be the best place in the world to be in contact with radical ideas about painting. I decided to move for grad school, and after being accepted to Pratt, I moved to New York in 2011.

Was it a shock to move to New York after having spent most of your life in Spain?

Definitely. I moved to New York in January, during a tremendous snowstorm. All the cars were covered in snow. I had never experienced snow before, and I didn’t have any snow boots, only sneakers. The airline also lost my suitcase, which arrived several days later. So, the only clothes I had were what I wore for the flight. On top of that, I did not know anyone at school or in the city. That winter was very hard. 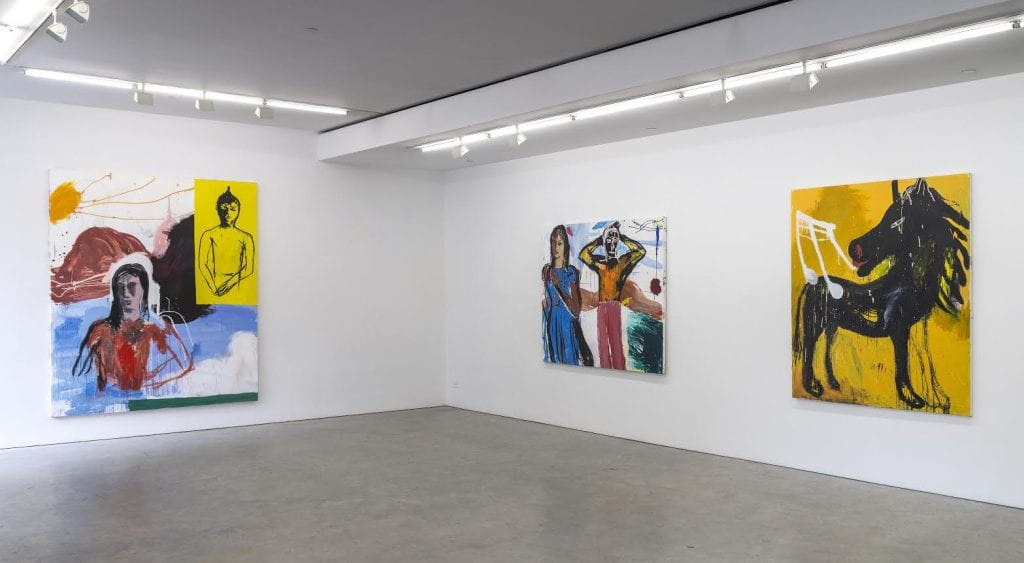 It seems like moving to New York is usually difficult for most people, and that the first year is the hardest.

That’s true. Eventually, I made a great group of friends, and I had a very positive experience with grad school. What I liked the most about studying at Pratt, compared to my experiences in Seville, is that it was not about being right or wrong. The professor was not the only one with access to “the truth”. You could defend your point. There was more openness in discussions. 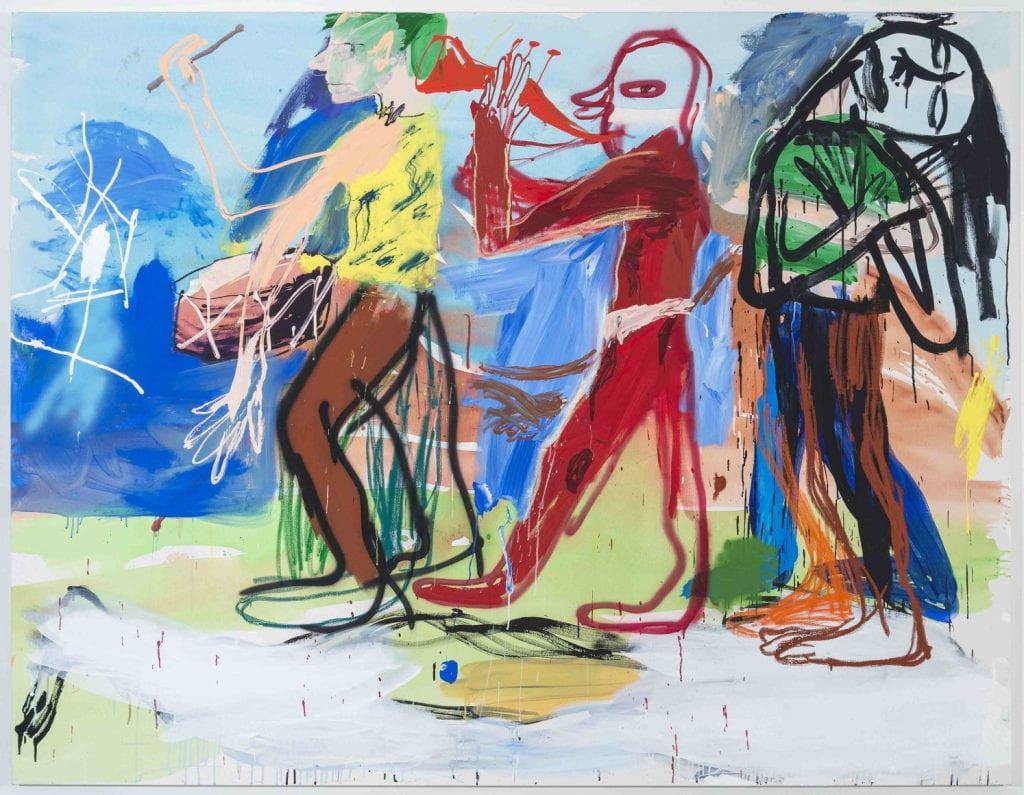 People are sometimes uncomfortable with ambiguity, and with acknowledging the subjectivity of our perceptions. The work in your current solo show seems to embrace uncertainty.

I love it when I see a painting, and I don’t know what’s going on, what the exact story behind it is. This causes me to look at it for a longer time, and draw my own conclusions. I find it more enriching and exciting than aiming for one single fixed meaning. I love the thrill of surprise and mystery. It’s so rewarding to create something that’s both familiar and surprising! 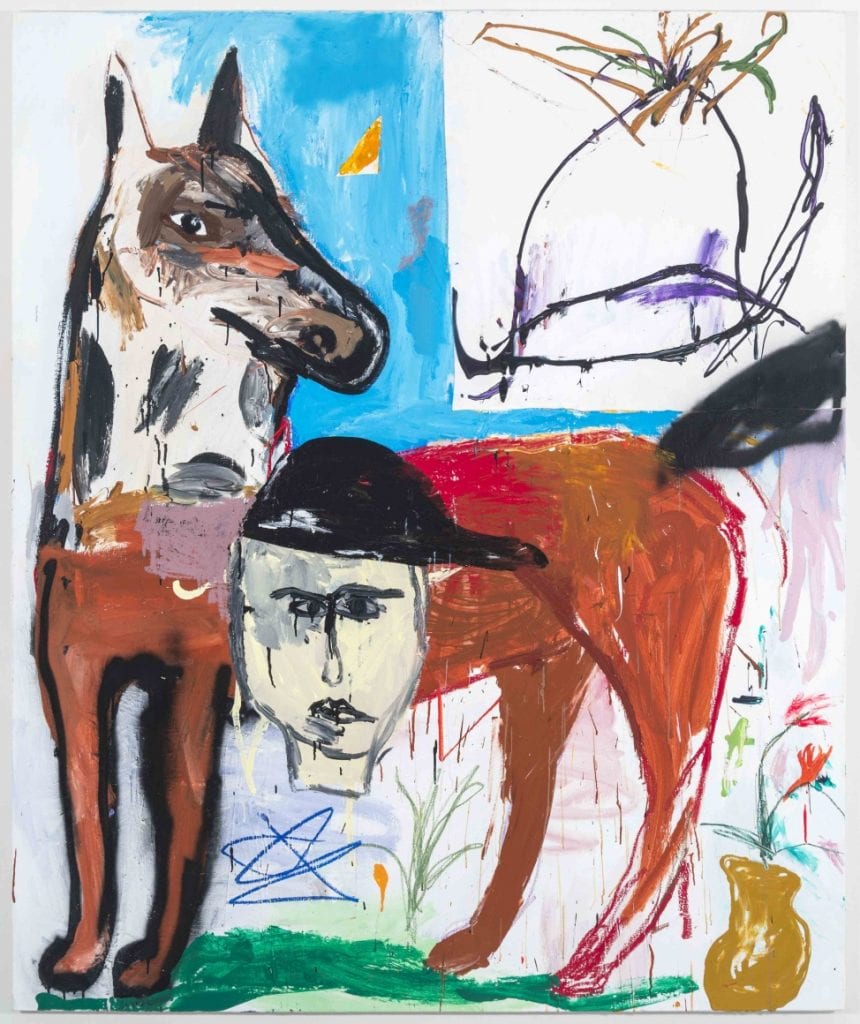 You’re giving the familiar symbol a new life by introducing an element of surprise.

There are objects so basic that we don’t question them. They act as templates, “excuses” for painting to happen: horses, plants, vases, and human parts. They have been used in the history of painting for so long that they become familiar and we just accept them for what they are. Introducing the twist, brings another level of meaning to the work, and creates new worlds to experience.

Within the new body of work, you’re reinterpreting these classical symbols in your own voice. The familiar pop cultural elements that you were using have been replaced with Etruscan figures, circus people, horses, and couples.

Yes, I am fascinated about archeology, the classical world, ancient cultures and humble and basic themes that come from the history of painting. 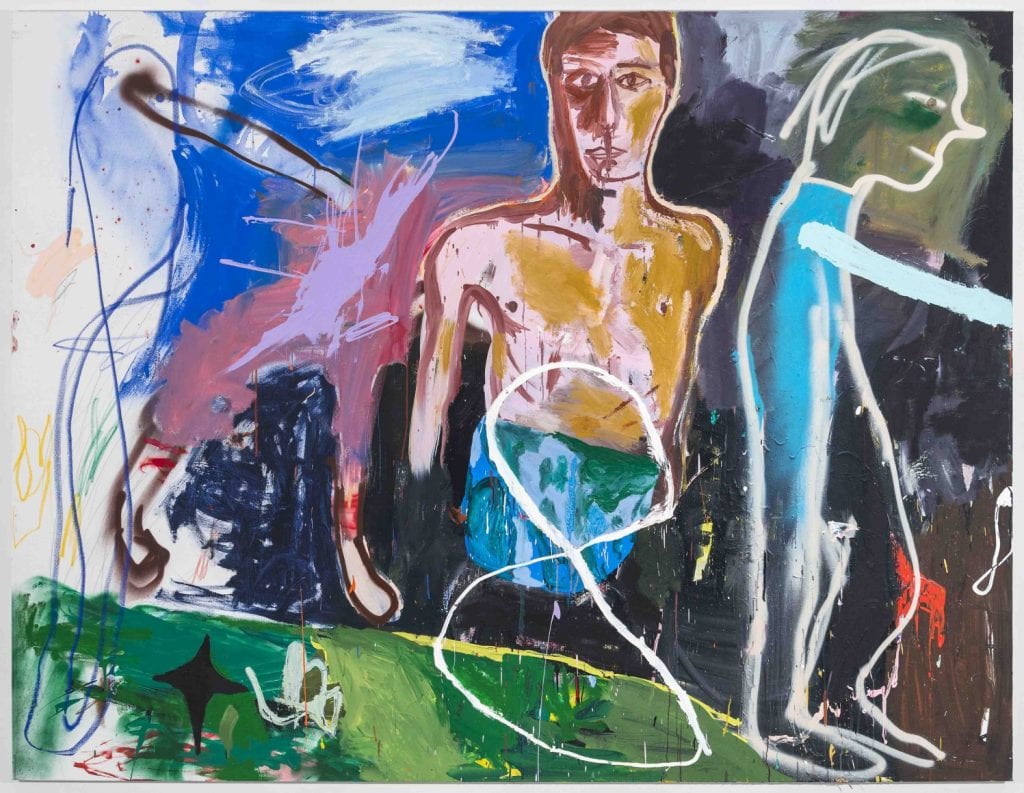 Where do the narratives come from? Is it an idea you have brewing in your mind or is it more spontaneous and improvised?

The ideas come from a spontaneous response to where the painting is leading me. The painting asks me for solutions as I paint. That’s how the narrative builds up, out of formal necessity and intuition. In my latest work, there is a focus on the figure, and I’m mainly depicting male and female couples. The personal and psychological aspects between people fascinate me, as well as creating a dramatic environment for them to exist in, which is another reason why I am drawn to Baroque painting.

So you never begin with a specific idea beforehand, the idea evolves as you paint?

I never know what is going to happen when I start a painting. I usually start with a vague idea, a sensation: an echo of a shape. That is the departure and from there things that I didn’t expect were going to happen just take place. Sometimes I erase them, sometimes I let them be and build upon them. My process is based on emotional responses to marks. The excitement that comes from discovering new dimensions is what keeps me going, if I already knew what was going to happen in a painting I would become bored, and I wouldn’t see a reason to come into the studio.

You have a love and reverence towards the history of painting, and yet you also have such a transgressive and mischievous sense of humor.

For me painting is an instinct and a moment. I guess this contradiction is my way of rejecting thorough rationalizations of my work. At the same time, I acknowledge painting as a language bowing to its long and rich history.

Irena Jurek is an artist, curator, and writer based in New York. In addition to Art of Choice, she has also contributed to Art News, Art F City, Whitehot Magazine, and other publications.