Dana Lok’s art transcends categorical norms. Her canvases include familiar visuals in an unfamiliar presentation, often turned on their side or reimagined in a 2-dimensional space. Inspired by the fantastical worlds of Disney and stage design, Lok uses her craft to create singularly original and unique realms. Lok is represented by Clima Gallery in Milan and lives and works in Brooklyn, NY. 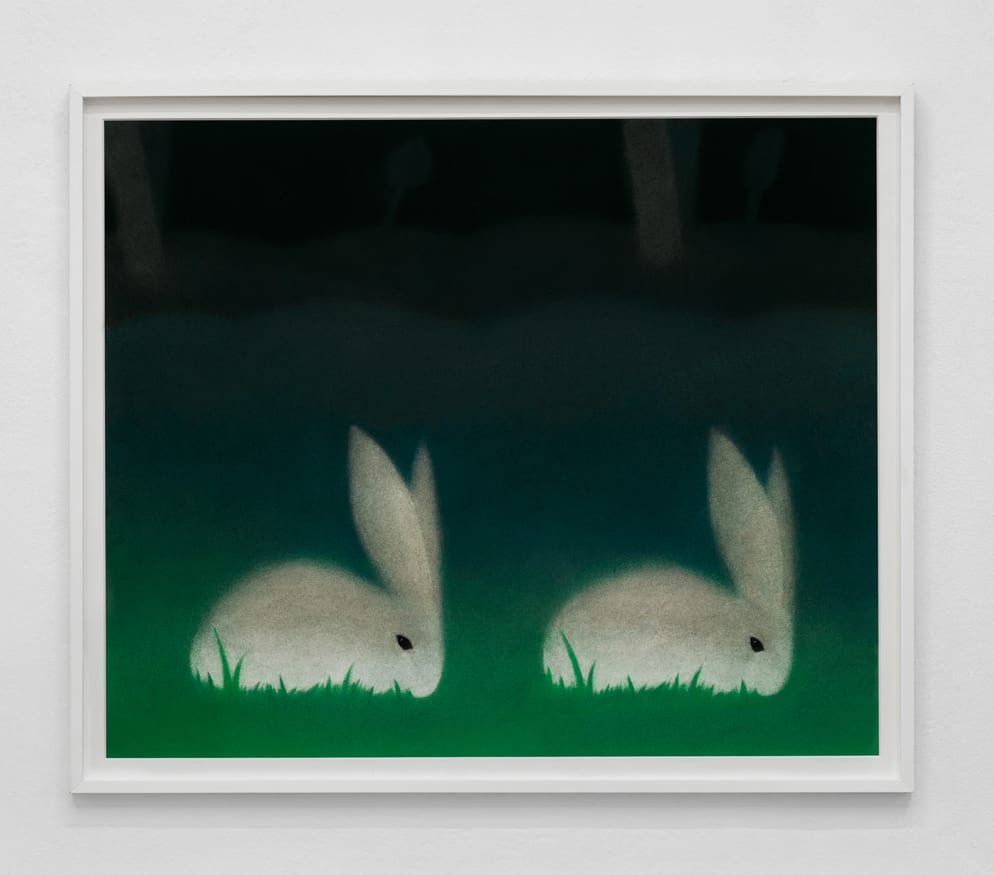 My community in NYC makes the hustle possible. The New York balancing act of supporting a studio, a place to live and materials while protecting the time and energy to make work would be insurmountable without a supportive community of artists doing it too, somehow.

I think all professional artists need a community to share information with, to learn one’s rights as an artist and stand up for them. My circle of female friends and mentors is a place to exchange professional experiences, a place to find out what’s the best and worst to expect out there, and what we collectively want to change. Gossip may be one of our greatest weapons against unfair treatment. 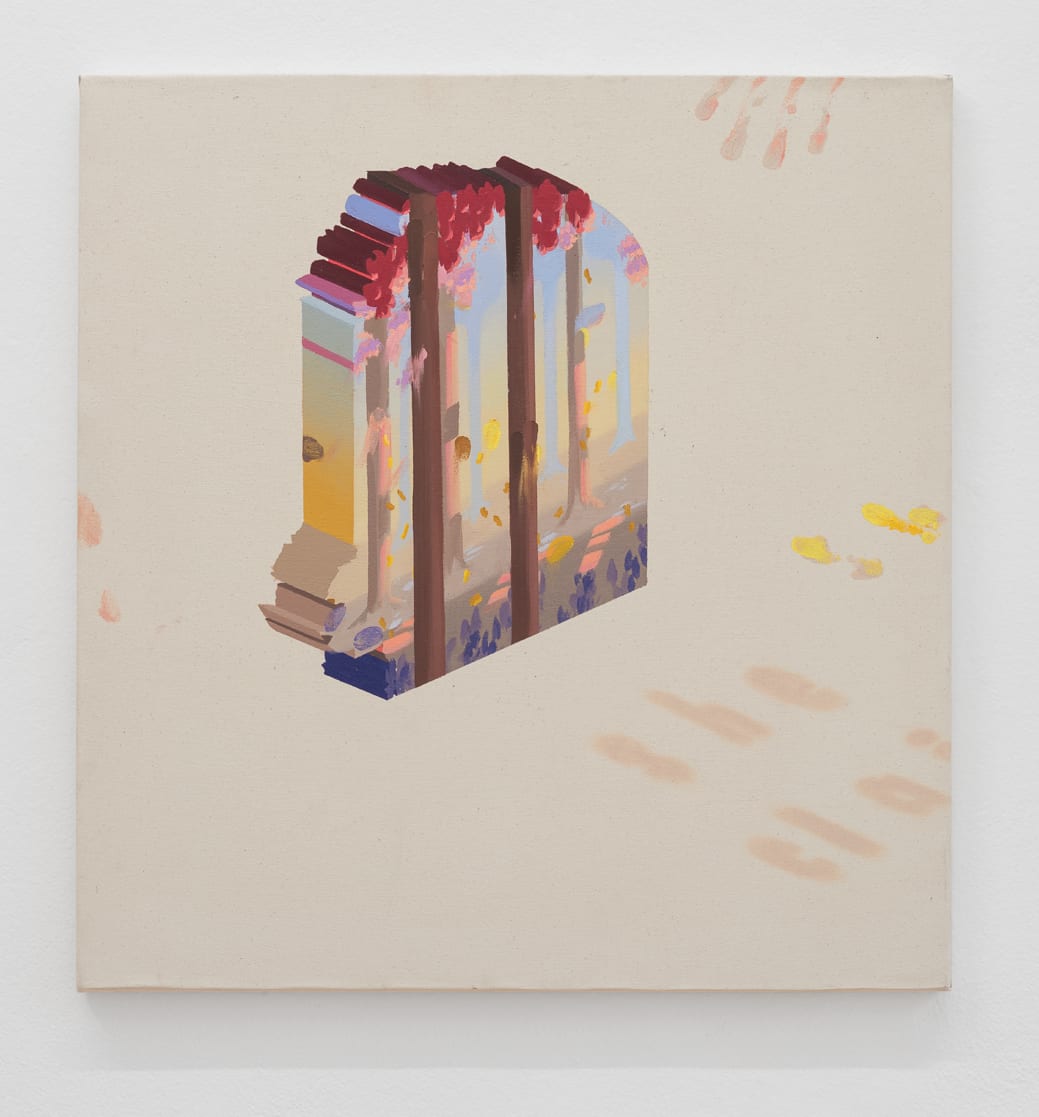 The artworks I turn to when I need a spark in the studio are Suzan Pitt’s 1979 animated film Asparagus, a dimly-lit surrealist trip between pleasure and creativity, Vija Celmins’ drawings and paintings, so cool and so tender, Tomma Abts’ crystalline abstractions–their surfaces are dense with the history of their own making–it’s like watching someone think. And Laure Prouvost’s videos and installations. She treats words and moving images like a thing you can hold in your hand.

I feel lucky that I can’t point out a time when I felt directly shut out or shut down in art making because I am a woman. But the lack of women known to the history of art drastically affects my and everyone else’s understanding of what art can be. I feel an enormous debt to the women a couple generations older who initiated the current battle for women’s rights. They made possible a world where I never considered being a woman as an obstacle to being an artist. But I’m still making art on a groundwork of visual culture made by men. I feel hopeful and excited to rebuild that groundwork with more equal parts, and eager to see what art looks like in the day when women are the history of art, not just the present. It feels like painting has only just begun.

Yes, I see young galleries, especially in New York, heralding young female artists. That’s great. I hope this attention to art made by women is also directed at the generations who have been doing it much longer than those of us fresh out of school. I think the hard part will be making sure the attention sticks, making sure shows turn into representation, and institutional shows, and into a place in the art history books, and a place in the cannon. 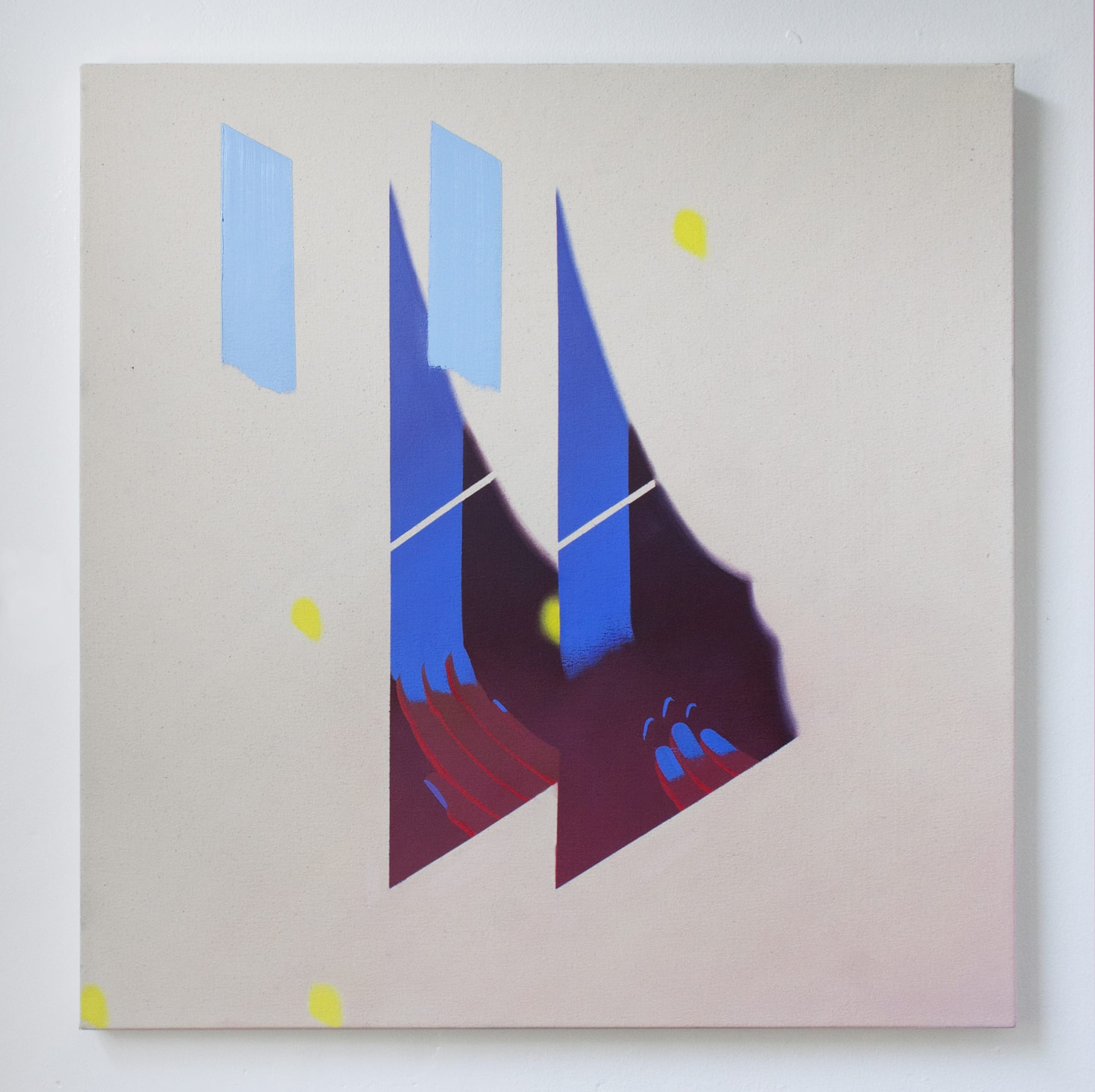 I want women to be able to support families and support their art. Part of that means that women need to make as much money as men in art. I want the market to invest in women the same way it invests in men.

For those unfamiliar with your practice, could you briefly describe how repetition places into your work?

When I repeat images within a single work–often simply a doubling–it begins as a reference to the passage of time, as if two frames have been lifted from an animation. I like to establish that temporal relationship, and then work against it–for example, a running figure might look back at past frames of itself. Two identical bunnies might occupy the same grassy field at night. The drawing asks, are there two bunnies, or just one, shown in time?

Other times, the repetition implies multiple viewpoints of the same image– a view from the side or the back that shows something unexpected.

What is your intention in choosing the forms and palettes that find their way onto your canvas?

I’ll often establish the palette of a painting at the same time I figure out if we are inside or outside and what time of day it is. I don’t think the colors I use come from the natural world as much as they do from already mediated sources–cartoon backgrounds, illustration, film, 3D models, stage lighting.

One recurring structure in my work is the stage set. It can show up as a curtain, a spotlight, a prop, or a proscenium. I like thinking about the painting itself as a magic show on a stage–a place where a magician strategically hides or reveals objects, gestures and words. 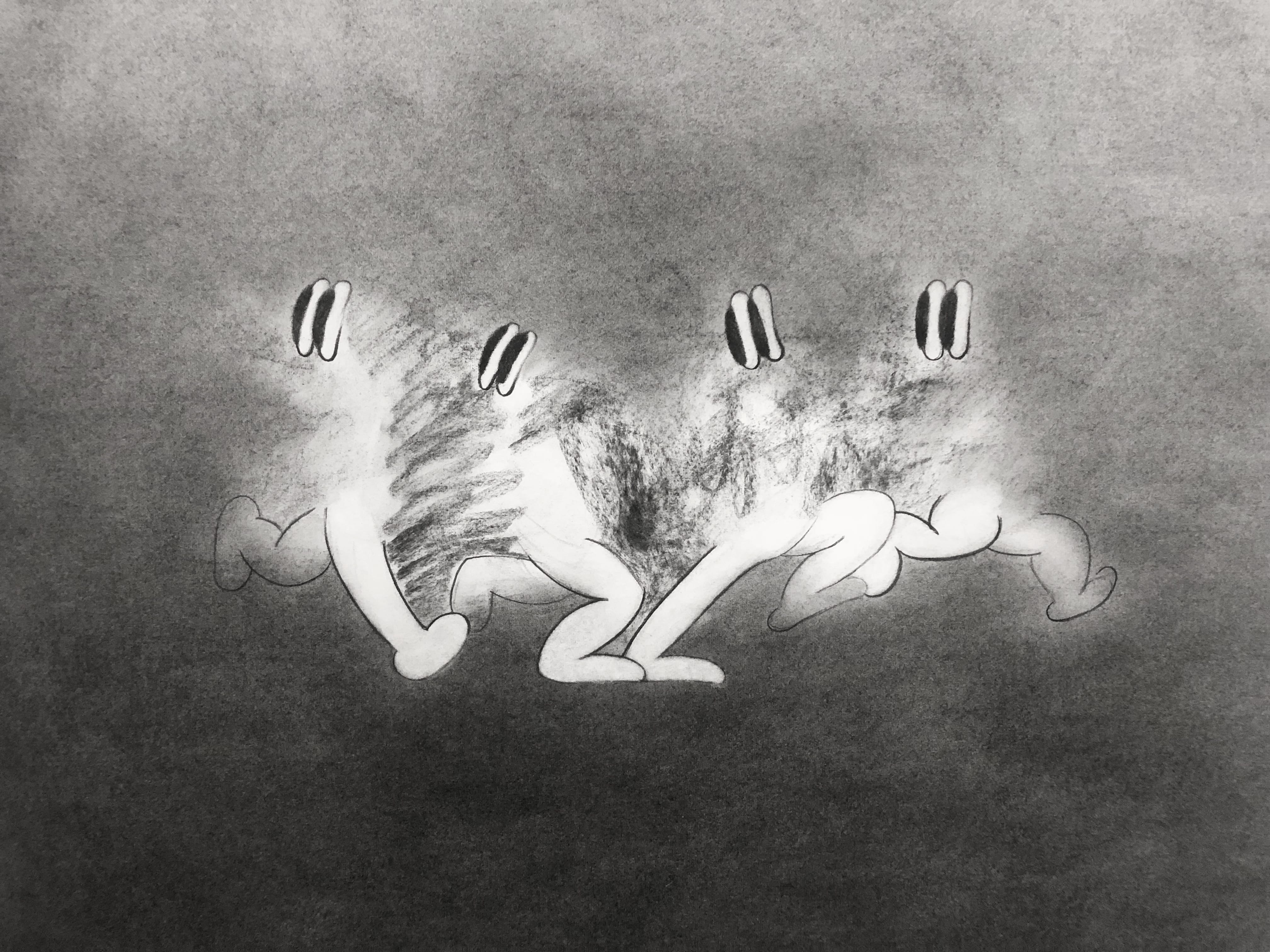 What visuals most inspire your work?

The fur in Jan Van Eyck’s Arnolfini Wedding, the gutters between the panels of a comic, the view from the back of a painting you know well, the physics of Wile. E. Coyote and the Roadrunner, the shimmer in Seurat’s dots, Charles Burchfield’s ecstatic landscapes. 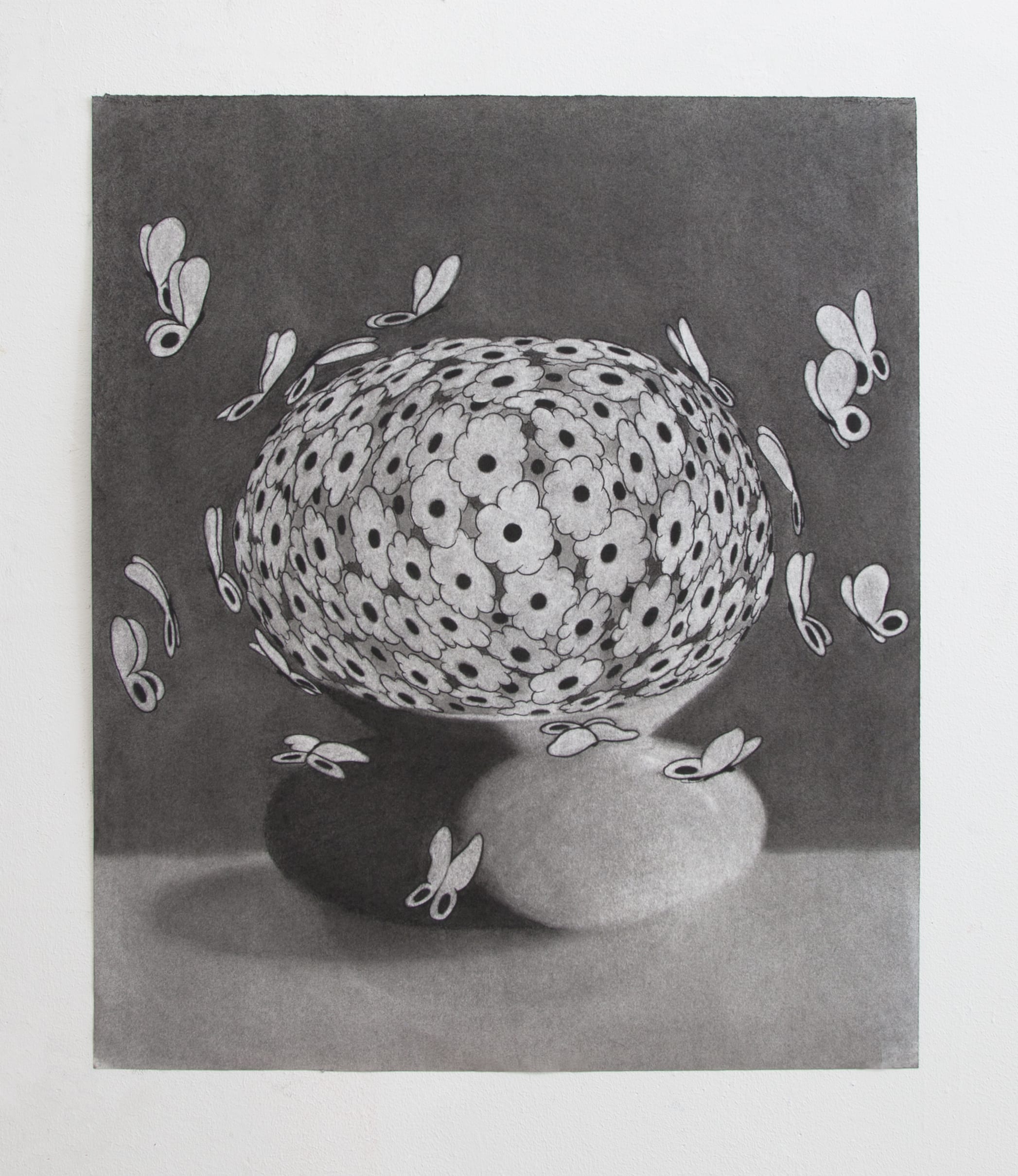 I’m very excited for a solo exhibition that will open at the end of September at Bianca D’Alessandro in Copenhagen. In this new body of paintings, I wanted to consider moments of time as things with weight and texture, as if the frames of a film were slices of butter. 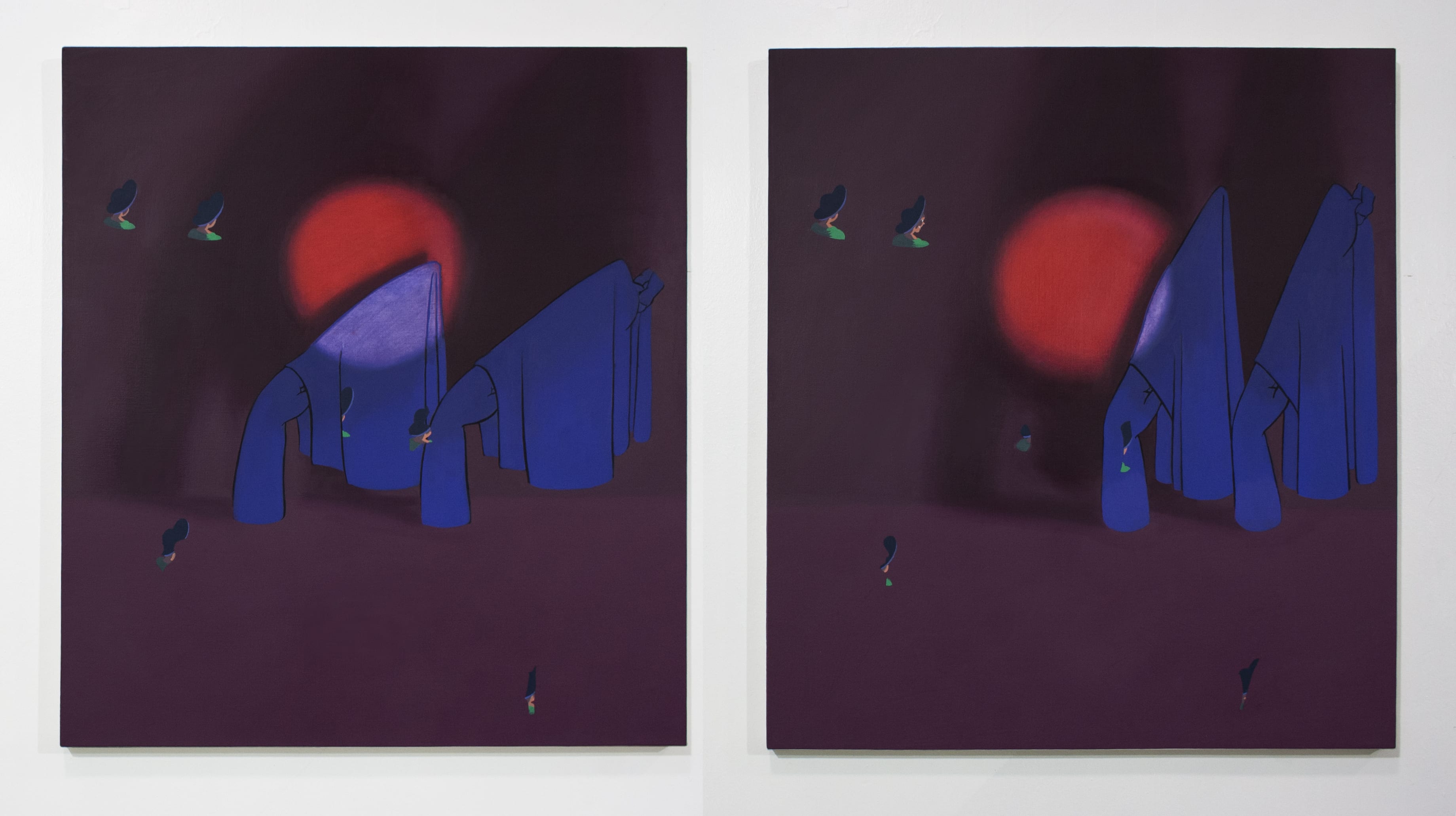 Bridget Mullen’s work is a great inspiration to me. She finds the most joyous and weird figuration through abstraction. Not since Frans Hals did someone use a smile so well in a painting. Her paintings are like best dance party.