You’ve experienced many different art scenes, from university in London, residency in Amsterdam, your current work in NYC and beyond – can you speak on how working as an artist differs in NYC than other areas of the world? 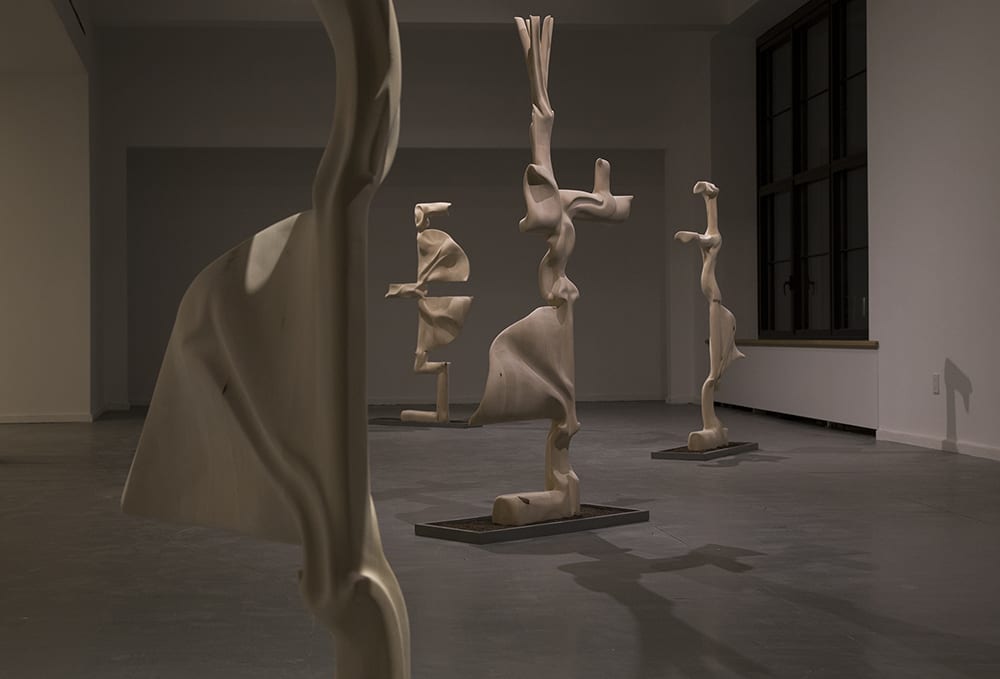 I’m still a young artist, so it’s hard to say whether the art scenes I’ve experienced were different because of the city, or because of the age and stage I was in my practice.

I spent time in both London and Vienna as a student. The art scenes were quite different, but as a student they were generally collaborative, informal, and sometimes harsh. In comparison to London, I found the art scene in Vienna to be more experimental. The students were generally older so they were unafraid to venture outside of the academy and set up a range of art events around the city. It was fun and convivial. I had a great experience there as an art student. In London, I learned a lot but generally stayed in the student bubble.

In contrast to these two cities, my time in Amsterdam during residency was quite solitary. The program accommodated only one artist at a time. It was wonderful and all I did was work. I wouldn’t say I was a part of any particular ‘scene’ over there. The residency directors were trusting and supportive, I met great people and just absorbed the city.

In 2014, I tested the waters in Berlin. At 24, I think I may have been too young to navigate the city professionally. It seemed that almost everyone in my age group was some kind of artist. It was so much fun and I made great friends but after several months I didn’t want to stay because the scene felt a bit frivolous. It was hard for me to stay focused. That being said, when it comes to museums and exhibitions, Berlin is one of my favorite cities. It’s culturally and historically fascinating. The spaces, facilities and resources are incredible and the work is subtle and intelligent. definitely see myself giving the city another try.

After Berlin, I decided New York was the right place to continue my practice. Sadly, the city is not particularly artist-friendly. There are no good affordable workspaces, no proper facilities and morale is pretty low. It’s a struggle for sure. My professional life has been quite solitary and it’s been difficult for me to deepen relationships with other artists because so many seem to have one foot out the door. Interestingly, it’s that push that presented me with so many opportunities. Everyone is hustling and paths are constantly crossing. The randomness, informality, and open-mindedness of New York works well for me as an artist. I’ve never felt more empowered than in any other city. My projects are growing more ambitious. Also, it helps that people actually buy art here. 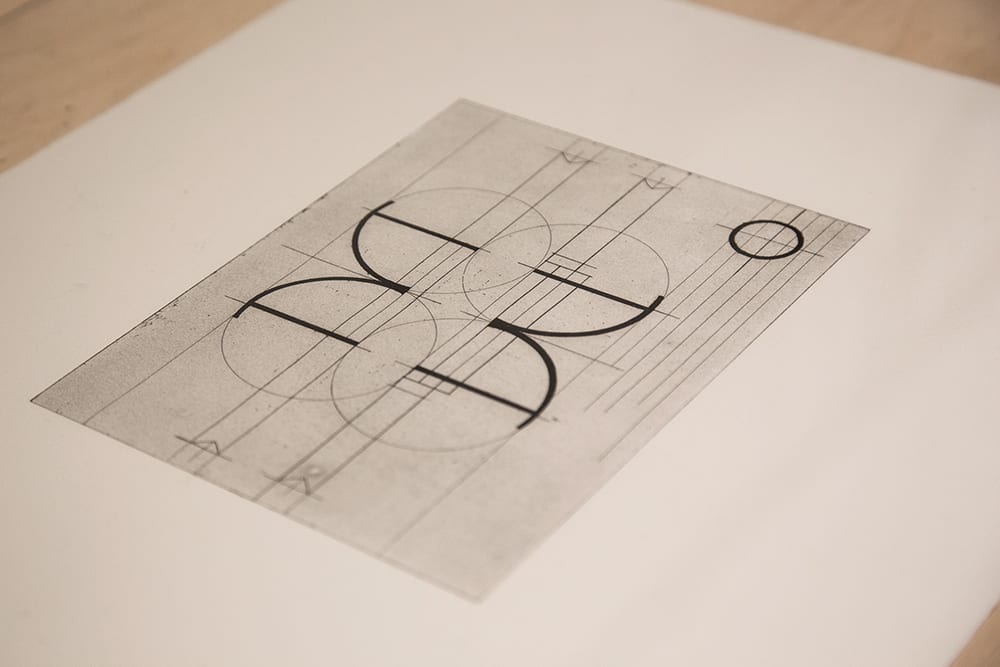 When did you become interested in creating site specific work?

I just returned from my first trip to Naoshima (Japan), so I’ve been thinking about site-specific work now more than ever. I think the first site-specific installation that hooked me was Seizure by Roger Hiorns (2009). I loved everything about it. It was a complete experience.

My first solo show in Amsterdam was actually site-specific and as a sculptor, it just made sense to me. In order for a three-dimensional work to be successful, it needs to have a relationship with the space it inhabits. Site-specific work pushes this further by fully immersing the work within its surroundings, both physically and conceptually. Space becomes part of the artwork, but so does time. If temporary, a site-specific work has a “historical” quality to it. When the bond between site and artwork is severed, something is lost. The space and artwork may continue to exist independently from each other and perhaps take on new meanings, but their original existence was, essentially, an event. As an artist who often draws inspiration from history, this dynamic between site and artwork feels most appropriate. The work behaves almost like an artifact.

Also, engaging with new spaces is exhilarating. Just a glimpse of a particular location can inspire an entire project. They go hand-in-hand. 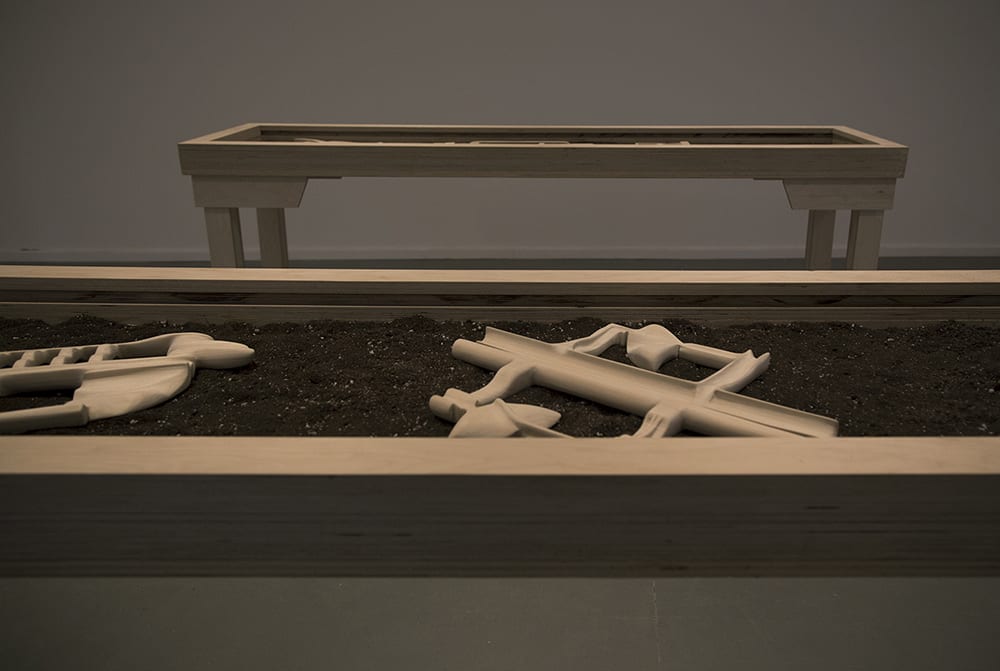 Is wood your favorite medium to work with? Why?

I started working with wood and metal early on because I was fascinated by traditional tool-making and wanted to incorporate certain methods to my work in sculpture. The first two objects I ever carved were a rustic knife and spoon. I didn’t put much thought into my choice of objects to carve, I was just practicing. It was only pointed out to me later that seeing an urban millennial instinctively carve tools like a Neanderthal was priceless. 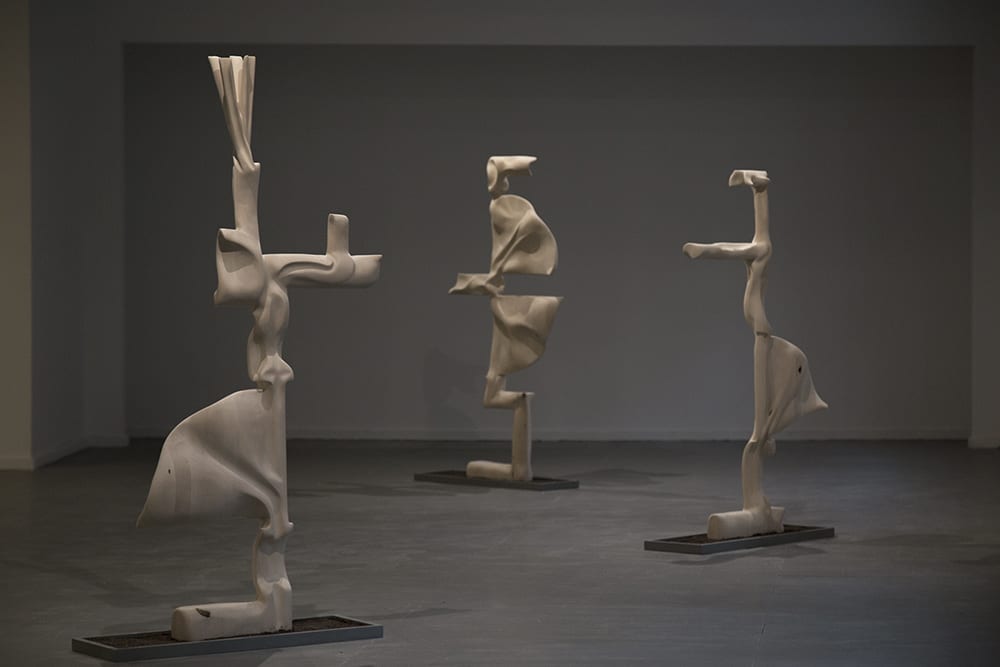 Once I became familiar with carving, I noticed some advantages to the material. Wood can easily hold together elaborate forms without the risk of the piece shattering beyond repair. Wood can break of course, but it’s usually a clean break– unlike plaster or ceramics. It’s less expensive than sculpture-casting, and no matter how large the piece, it doesn’t require a trip to the foundry or any other special facility.

There are many pragmatic reasons, which I discovered only after I became comfortable with the medium, but what was particularly interesting to me was the reaction to the choice of material, especially in University. Woodcarving is so closely associated with the world of “craft”, which is almost a bad word in art school. There seemed to be no room for it in contemporary art. I found the notion to be absurd… No material or subject should be off-limits. So it started as a small act of defiance. I purposely drew inspiration from the world of “design.” I borrowed imagery from diagrams, blueprints, digital icons, etc. and used traditional “craft” methods such as basket-weaving, woodworking and blacksmithing to create sculptures. It was a funny kind of rebellion, almost reversed.

Many of my recent works are created with wood, but I’ve always been a multi-media artist. I also create works in photography, video and etching. In sculpture I use a range of materials. While I am most skilled at woodcarving, I am also working on expanding that skill-set and discovering new media. 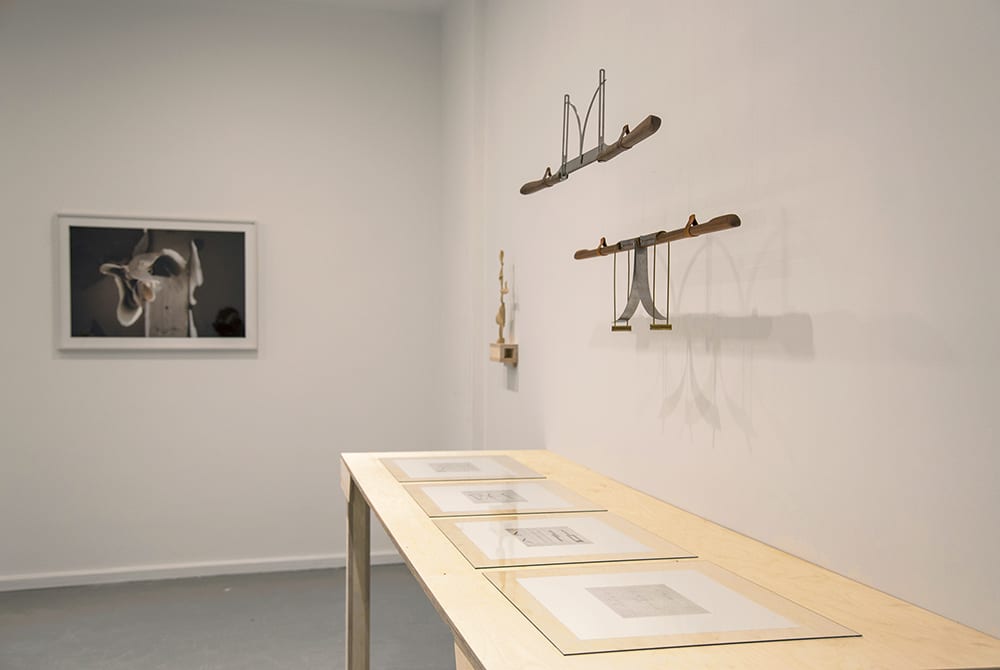 Can you tell us a little bit about your exhibition Elevations?

Elevations is a large solo exhibition of works inspired by architectural imagery, located on the ground floor of 90 Morton – currently a building site in downtown Manhattan. The show was curated by Lolita Cros.

My relationship to 90 Morton is quite special. It’s an old industrial building in the West Village, now a development of luxury condominiums which is still under construction. In 2015, I was hired as a photographer to take pictures of the site, even before construction started. When the development company discovered my work in sculpture and interest in architecture as subject matter, the opportunity to exhibit exhibition was presented to me.

There is a good number of works in the show – mainly sculptures, but also photographs and etchings. There are a few photographs of early construction, works from my Vistemboir project, sculptures from my Bar Bones installation, and of course, the highlight of the show Elevations.

Elevations is a series of life-size sculptures, inspired by the floorplan sections of the future residential development, 90 Morton. 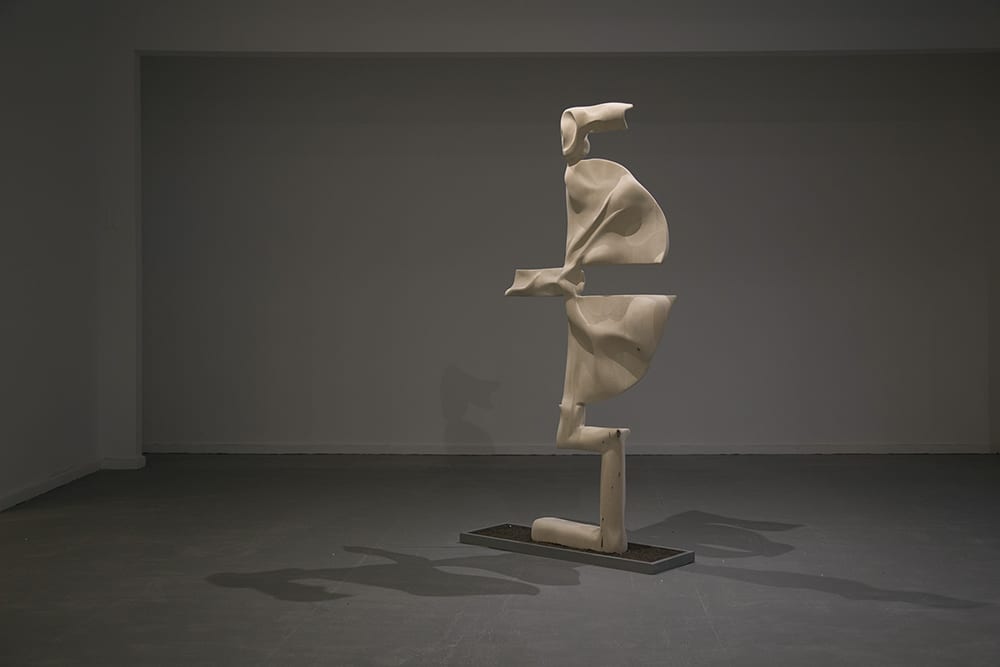 What does Elevations mean to you? Does it have any special meaning?

Elevations is an architectural term. I also chose it as the project title simply because these sculptures are my first large-scale, floor-standing sculptures. It’s almost as if they were literally “elevated”.

My father is an architect. I was exposed to architectural imagery – such as floorplans and construction sites – since early childhood. For most of my life, architectural plans have been a familiar sight. Without understanding what they mean, I only appreciated them as forms. As a child, I searched for new meaning within the technical outlines, and now as an artist, I continue to do the same. 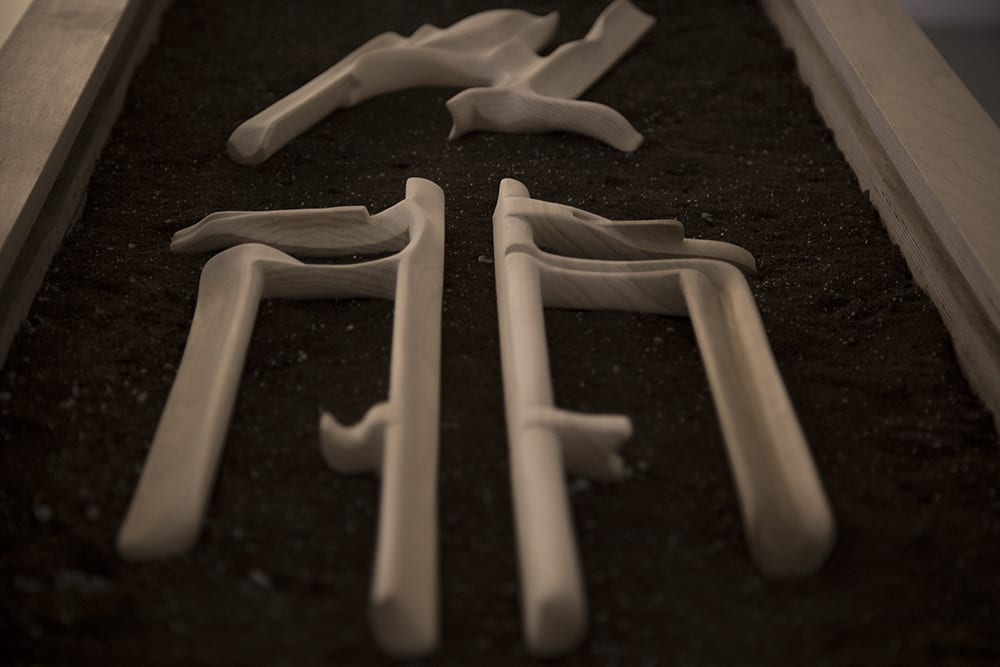 What are you looking forward to doing next?

I have several project ideas in a wide range of media. I’m very eager to start them, but before I tackle the next big project I plan to learn more about sculpture-casting specifically. I may apprentice at a studio sometime this summer, hopefully. Never stop learning!