David Matthew King recognizes the value in providing space for things to exist. Repeatedly making use of a primary color-centric palette, King creates seemingly straightforward paintings, making use of the canvas’s negative space. Often self-referential, King’s work is rooted in references to music and sound, 1970’s punk, and Impressionism, among others. His works feel like distinct characters, each alive with their own story and individual pulse. King is based in Brooklyn, NY. 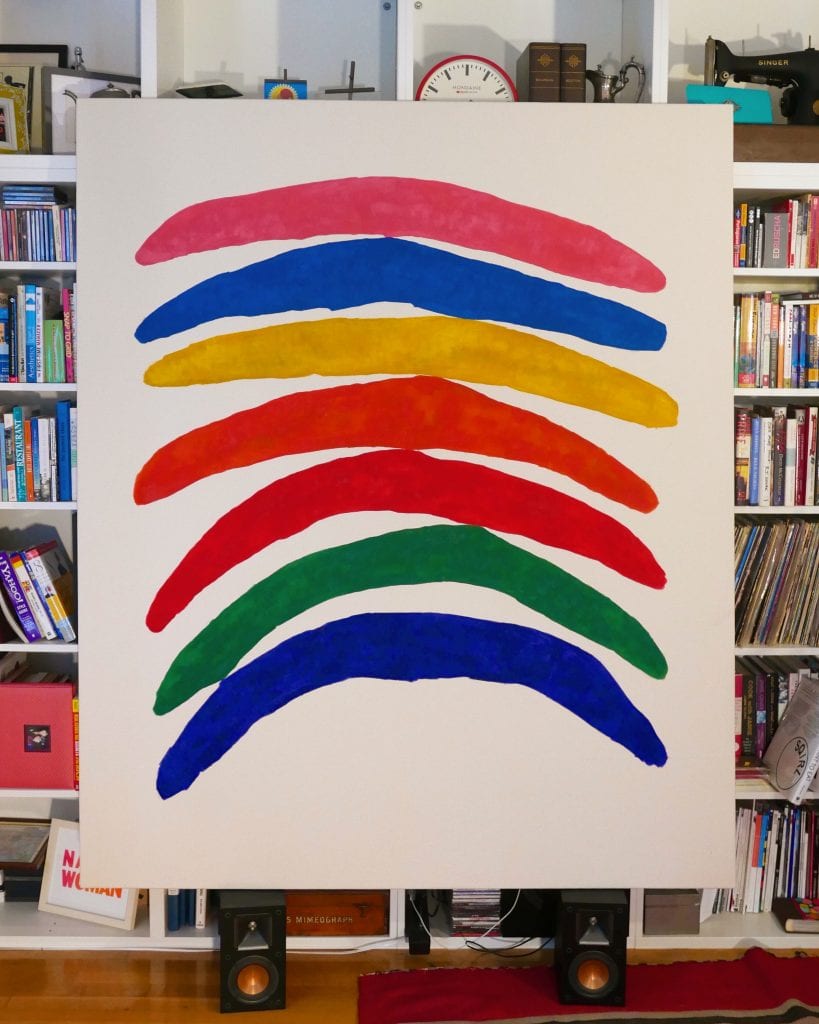 Tell us a little bit about yourself. Where are you from and when did art first enter into your life?

I grew up on the beach in Southern California. By the time I was 21 and writing songs and fronting a band I had already begun to erase the California from me. When I moved to New York at 23 I didn’t want anyone to know where I was from, how old I was, what ethnicity I was, nothing. I didn’t really grow up with traditions. My family seemed to be living month-to-month. As a kid I felt like I had come from nowhere. New York at the time still provided the opportunity to be from nowhere. The first piece of art I remember seeing in my life was David Hockney’s Mulholland Drive. I was maybe 13. I had a sort of wealthy aunt who was a docent at LACMA. My dad and I went to visit her one day. She was telling us what it all meant and how he did it and I stood there thinking Wow, that doesn’t look like Mulholland Drive at all. I pretty much hated visual art and poetry until I was 23. I was an angry teenager well into my twenties. Then I saw Annika Larsson’s “New Gravity” and everything changed. 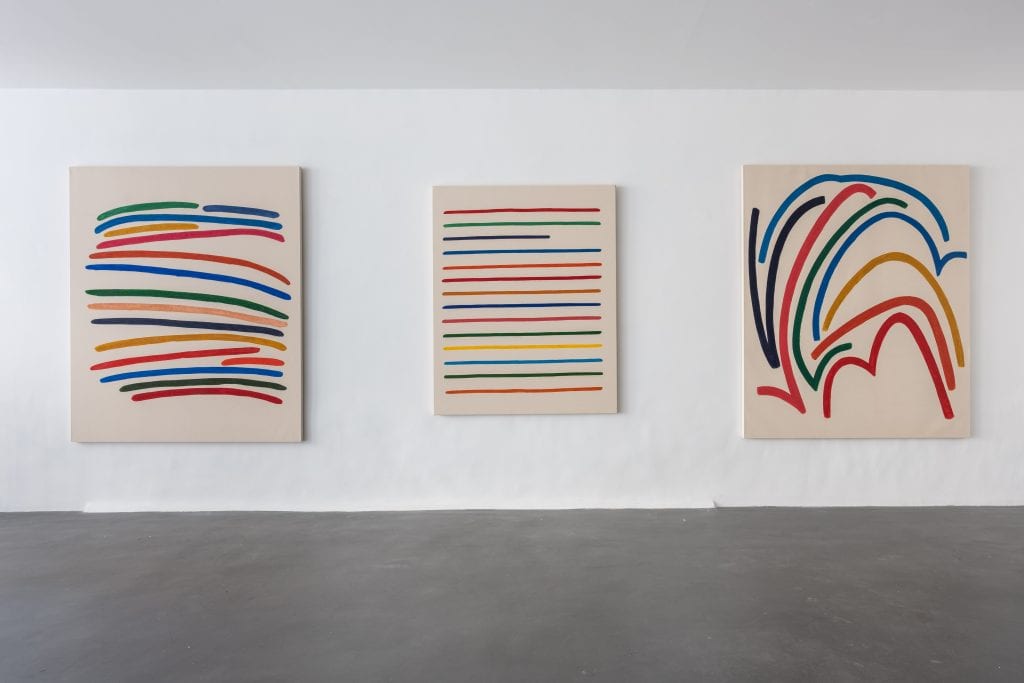 Your work feels very dynamic while not overcomplicating what’s happening the canvas. How do you find this balance?

I started working at a record store when I was 17. Standing behind the counter we had many, many analytical discussions about music and songs and cover art and historical context. A lot of those conversations stayed with me and really shaped my perspective on things. Conversations about how good producers create space for the vocals and how music always sounds better on speakers than earphones because it needs space to breathe. I began working at a recording studio around the same time. I was getting variations of the same lessons. Everything seemed to be about space. Controlled space. Soundproof space. The space between the microphone and the instrument. Space to vibrate. The space between the attack and the decay. All those conversations influenced the way I would play drums, write songs, write words, how I would operate in the classroom. I hate clutter. I need clarity. That was always the goal when I was teaching English. It later became the goal when I was painting. It wasn’t a conscious decision but when I look at the work I make now I see those music conversations I had as a teenager. I have some crossed wires in my brain. I listen to my paintings more than I see them. 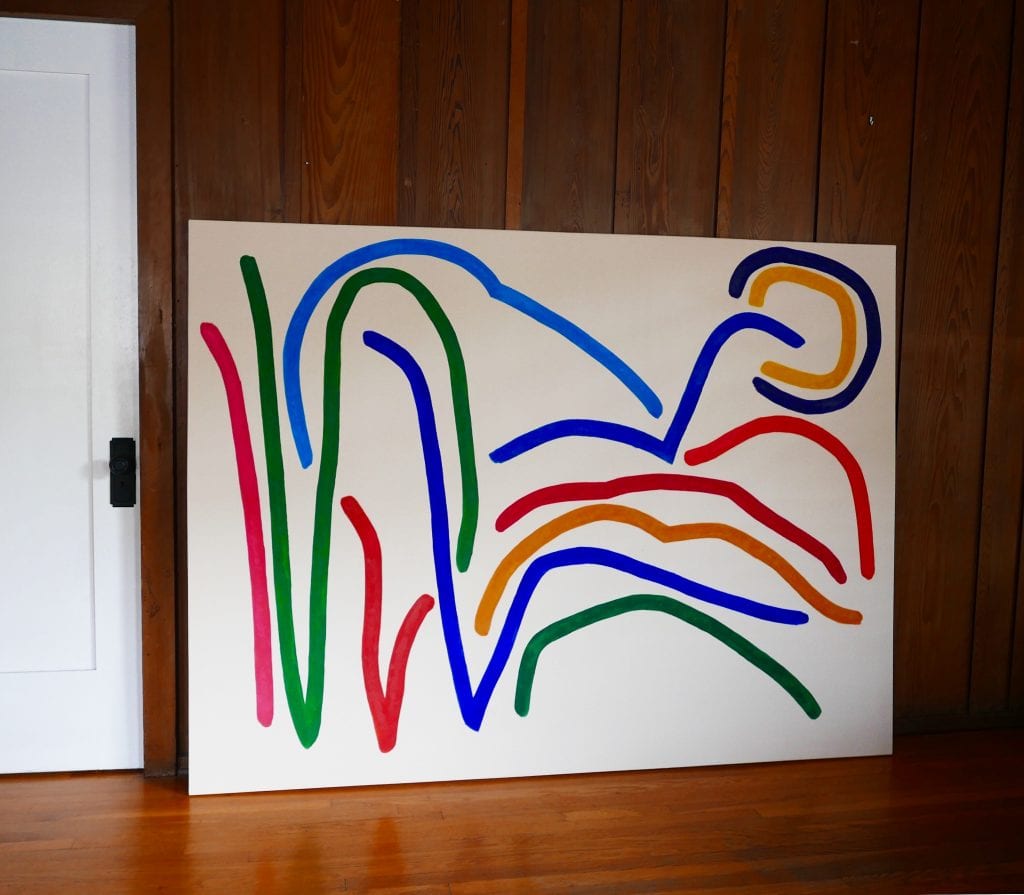 What art movements most inspire your work?

The movements that have influenced the work aren’t all having to do with visual aesthetics. I think 1970’s punk and 19th Century Impressionism both carry equal weight. I’m drawn to the immediacy of things. That’s more out of biological or neurological necessity. I’m hesitant to say the things I’m drawn to I’m drawn to by choice. The inside of my brain already looks like a Pollock or de Kooning and my classroom chalkboards were too close to a Twombly for me to care about doing something like that on canvas. Otherwise I might say Ab Ex was the most influential for me. It’s less about making what I feel and more about what I need to see. New York No Wave really changed the way I think about a lot of principles. 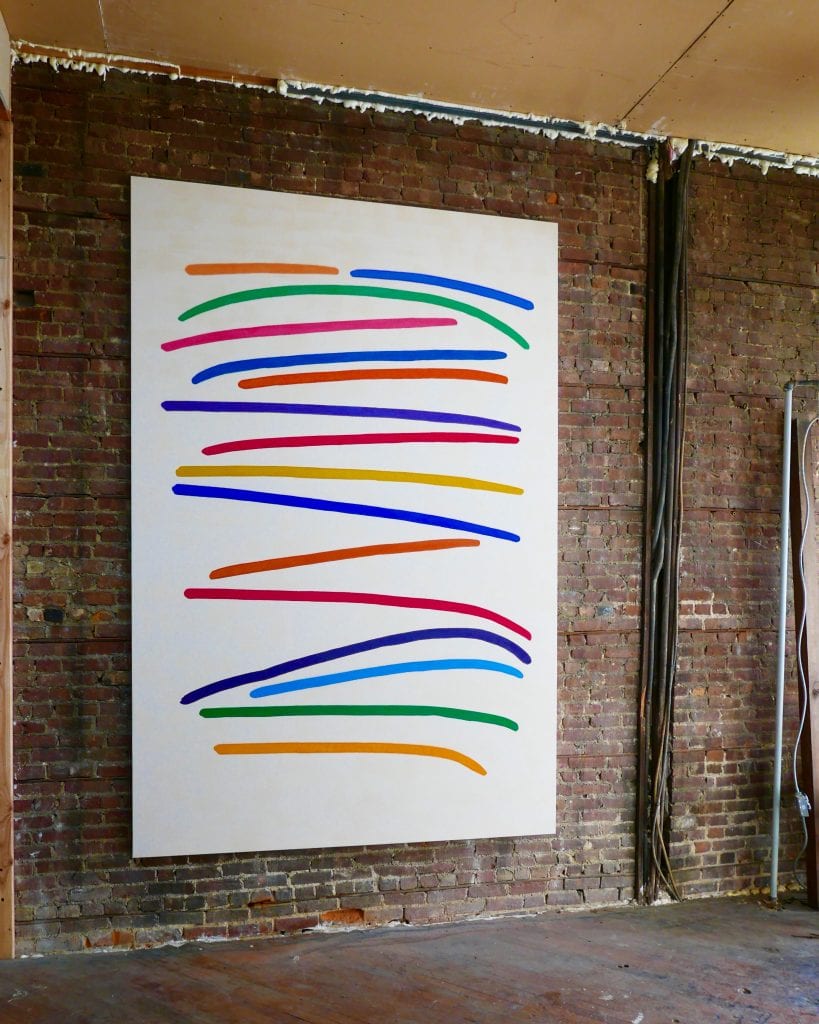 Your work makes use of a reoccurring color palette. How did you land on the colors your canvas’s typically feature?

I was making these medium sized paintings that were absolutely loaded with paint and I was driving myself crazy trying to decide which colors to put where. For a while I would spend about an hour a day at the art supply store just staring at colors and buying tons of different blacks and whites and greens and oranges and pinks and purples and nothing really seemed right. When I went back to the Art Students League a couple years ago I went looking for color answers. I found them with an instructor who encouraged me to return to charcoal and focus on abstraction technique and mark-making while practicing the color mixing techniques I learned 13 years ago. Since then I’ve been mixing all of my colors from warm and cool primary colors. I found a certain harmony that resonates with something inside. Again, these are shared musical terms. I like the sound of a snare drum bleeding into a vocal mic. I love a little bit of red in there when I’m mixing a green. It keeps everything in the same room. 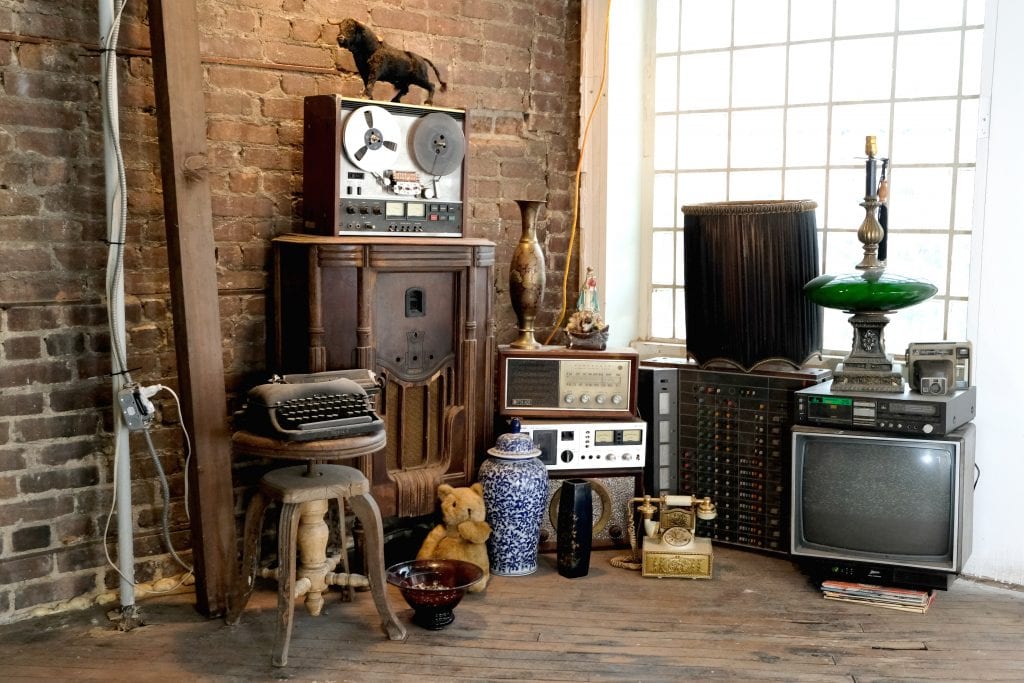 What keeps you inspired?

Inspiration again sort of comes from neurological necessity more than creating for creation’s sake. I need new things to look at. I need new things to hear. I need to be surprised by things and I need to be surprised by myself. Coming out of the world of academia and English Literature and creative writing I was exhausted by stories and personal narrative and symbolism. This was a time when I felt my own story was too sad, too hopeless for anyone to give a damn. I decided to try to make work that was only self-referential. I wanted to make paintings that seemed to come from nowhere but had been here all along. There’s also that human need to communicate. Sometimes the thing that’s being communicated is too dark for words or symbols. The paintings are sometimes just a signal that the light inside is still on. 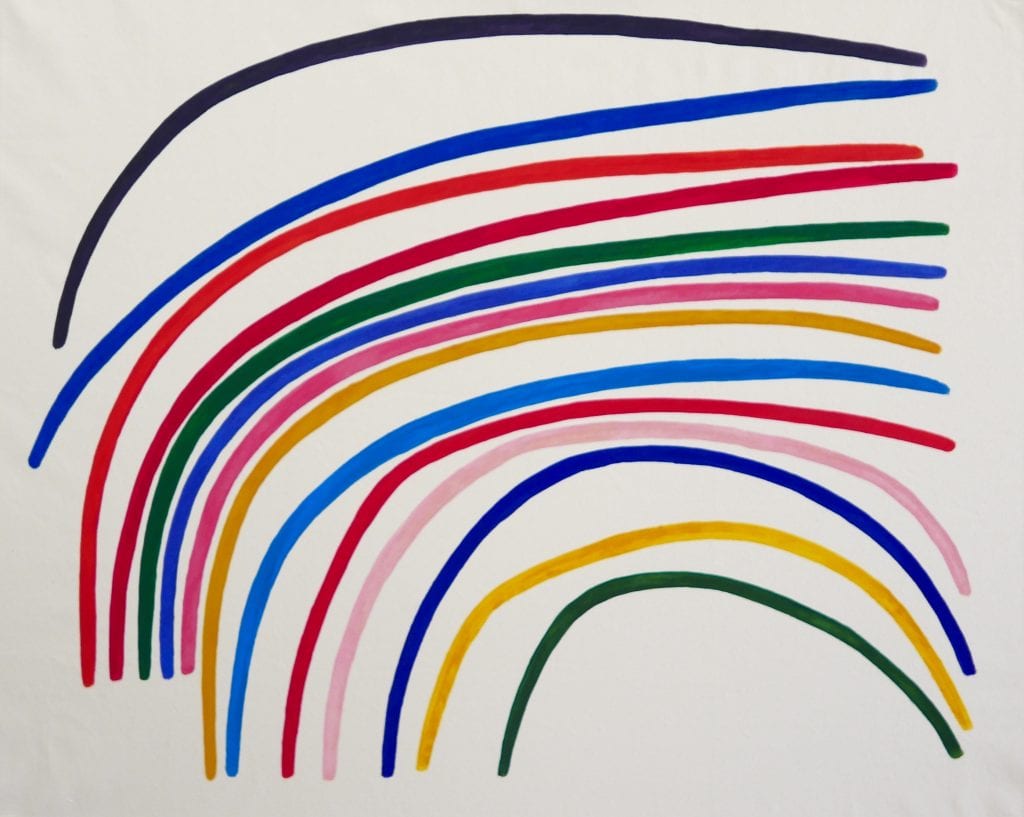 How do you know when a work is complete?

The paintings I’m doing now don’t leave a lot of room for correction or undoing. I like walking them up to the edge of the cliff. At that point one more step is merely hubris. I walk right off the cliff pretty often. Those canvases get shredded. Years ago I had a design teacher who would make us cut perfect squares out of the center of rectangular sheets of paper using only a ruler and scissors. When we asked if it was correct he would ask, “Does it pop?” If it did, you would know. You could move on. If you weren’t sure, you’d know, and you’d have to start over. That’s a pretty good gauge. Sometimes it’s like an orgasm. If you’re not sure you’ve had one, you haven’t. 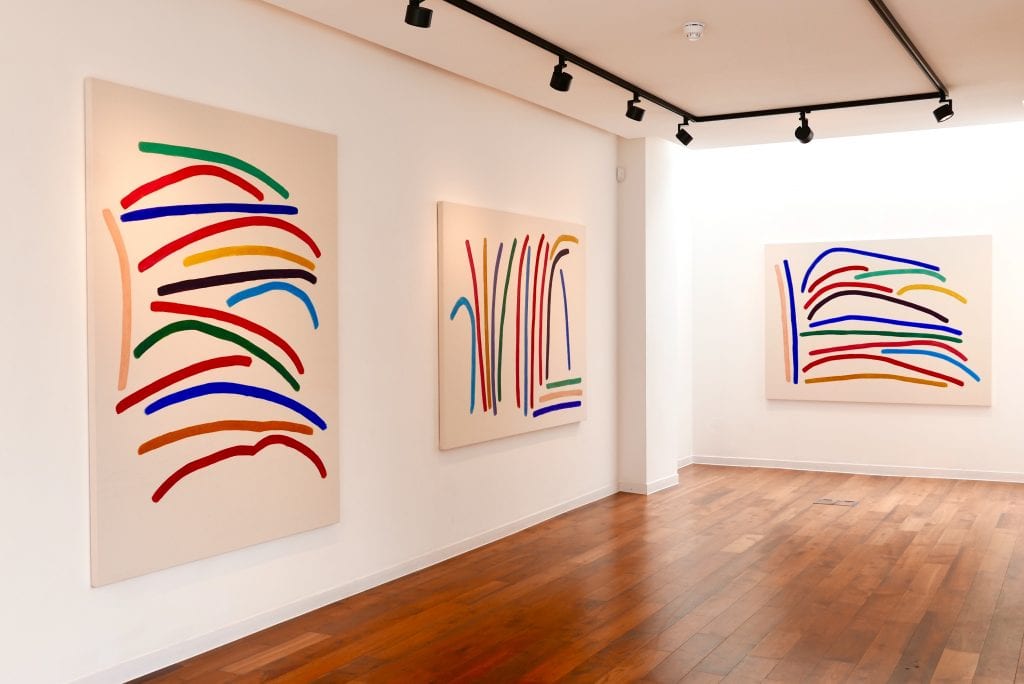 In January I’ll be in a group show at Ruttkowski 68 in Paris. The show is curated by Jenny Brosinski and features artists from NYC and Berlin. I’m happy to represent NYC alongside Cristina De Miguel and Robert Nava. After that I plan to do a short residency in London with The Dot Project. Those details are still forthcoming. I’ve also been conceptualizing some installation and film ideas I’m pretty excited to execute.

What artist do you recommend we interview next?

Richie Culver in the UK is doing some stuff that seems to be making some folks pretty angry. I like that people still get upset by paint on canvas. Maybe Robert Nava for the same reason. I don’t know. There’s too many to mention.