Debbi Kenote creates an abstract language where figurative shapes take on emotion and meaning. In her work, which span paintings, drawings, and sculpture, Kenote draws from both natural and man-made source imagery, often investigating the relationships that exist between the two. A Jack of all trades, Kenote also works on the business side of art, as a writer and curator. She lives and works in Brooklyn, NY. 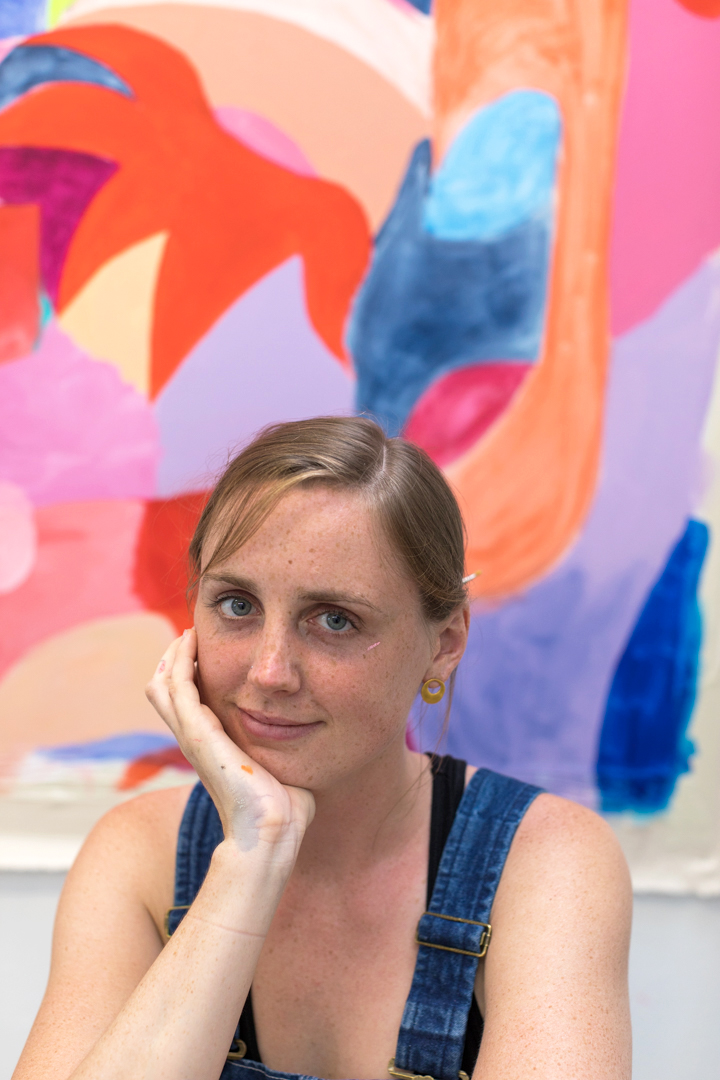 You are part of a young generation of artists hustling and gaining recognition in NYC. What does being a part of a strong community mean for you?

I moved to New York City almost five years ago, and I think it suits me. I am grateful for the energy in the air and my peers here. I think it’s incredibly important to have community as an artist. Seeing shows, giving and receiving feedback on new work, sharing job and show opportunities, and just having other artists around to make your hustle feel a little less crazy is really priceless. 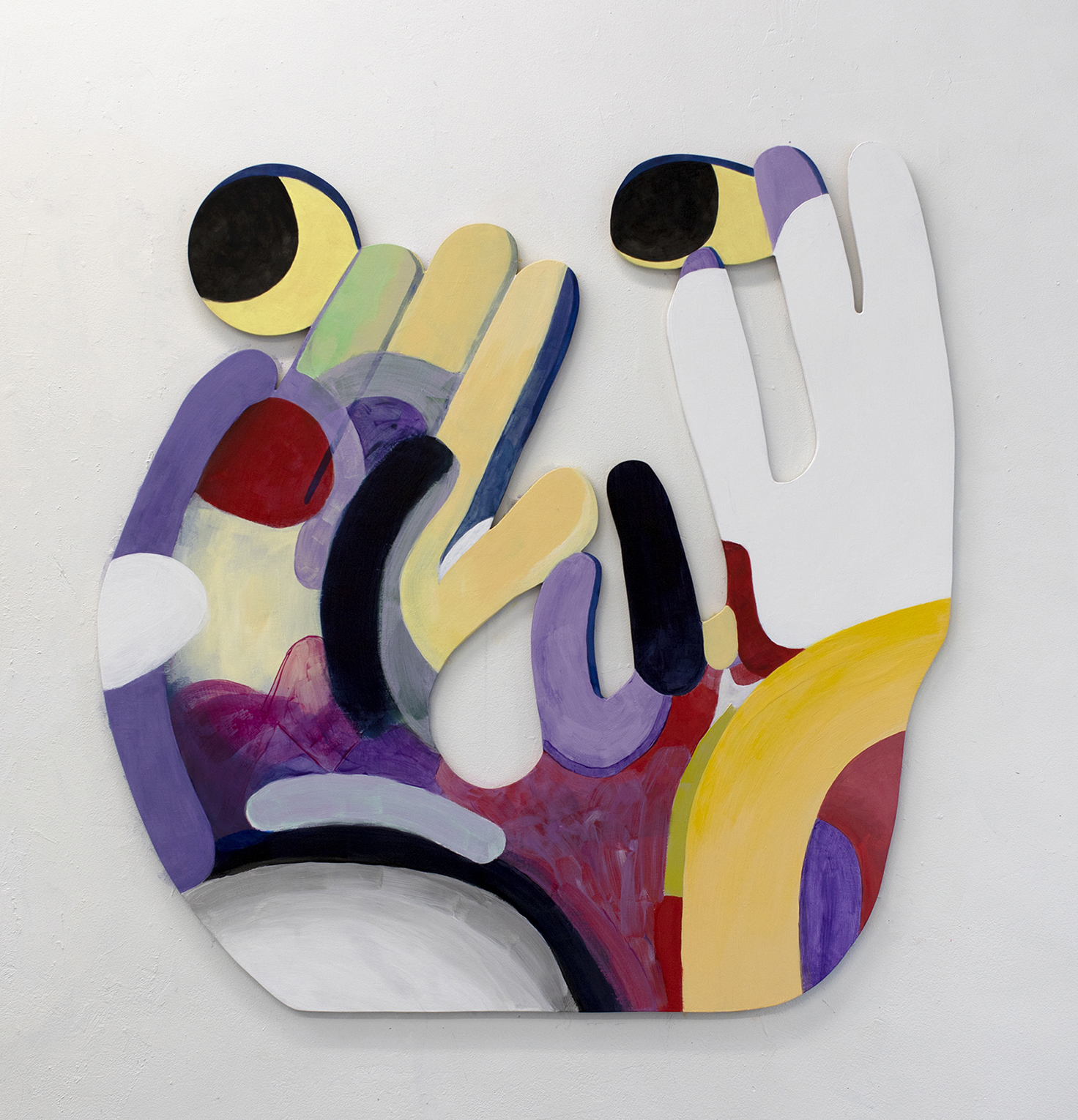 Which artists, living or dead, inspire you most?

Hmm well there’s a lot. For painters, I do try and carve out my own female history in the landscape, although I make exceptions. Charles Burchfield for instance – I think he really captured the spooky psychedelic mood a landscape can possess, which is something I think about a lot. I studied under Mike Cloud at Brooklyn College, and I think he has influenced my work. Carol Summers, also made some really incredible prints on the West Coast that keep me up at night they are that good. American Modernist painters Emily Carr and Deborah Remington are two of my favorites, I think they were doing something really different with abstraction and often get overlooked. Contemporary painters – I have infinite respect for Rebecca Morris, Allison Shulnik, Sadie Benning, Vanessa Prager, the list goes on… 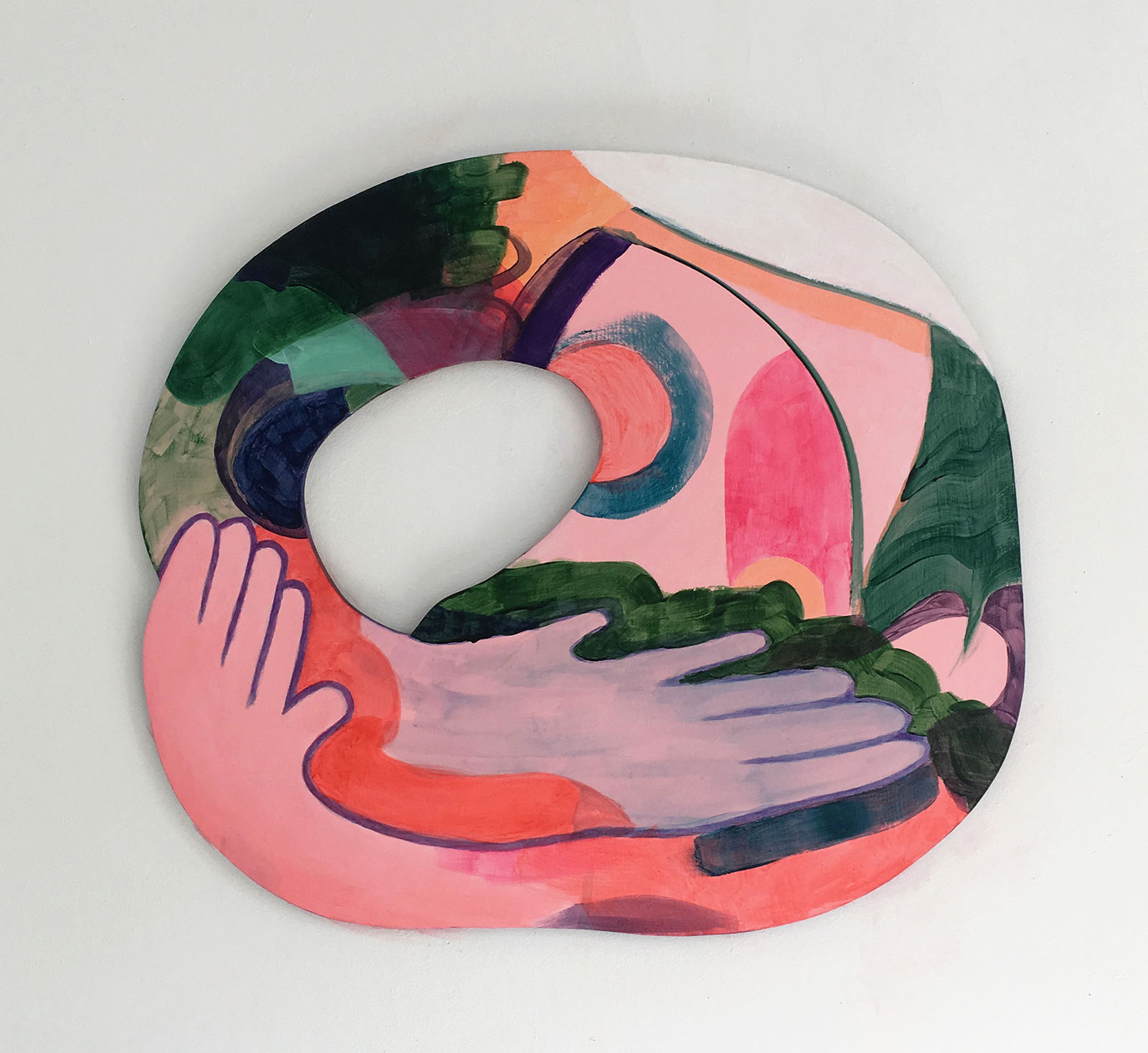 How did your upbringing in the Pacific Northwest influence your art practice?

It’s a good question, it’s definitely source material I’m still mining. The Pacific Northwest can be a very private, moody place. I spent a lot of time playing alone or with friends in the woods, building forts, climbing trees, using my hands. I think there’s a foundation there for the language I use in my abstractions now. I was instilled with a sense of awe for things bigger than me that I didn’t understand, be it natural or spiritual. I think that finds its way into the work now. There’s also an appreciation for subtlety in that region that can be remarkable when translated into color. There’s a lot of experimental music and sound work that comes from the Northwest that I also think about often. Overall the Northwest is an inspiration, but the work for me goes beyond that. I think there’s a bigger language I’m developing that it all fits into it. 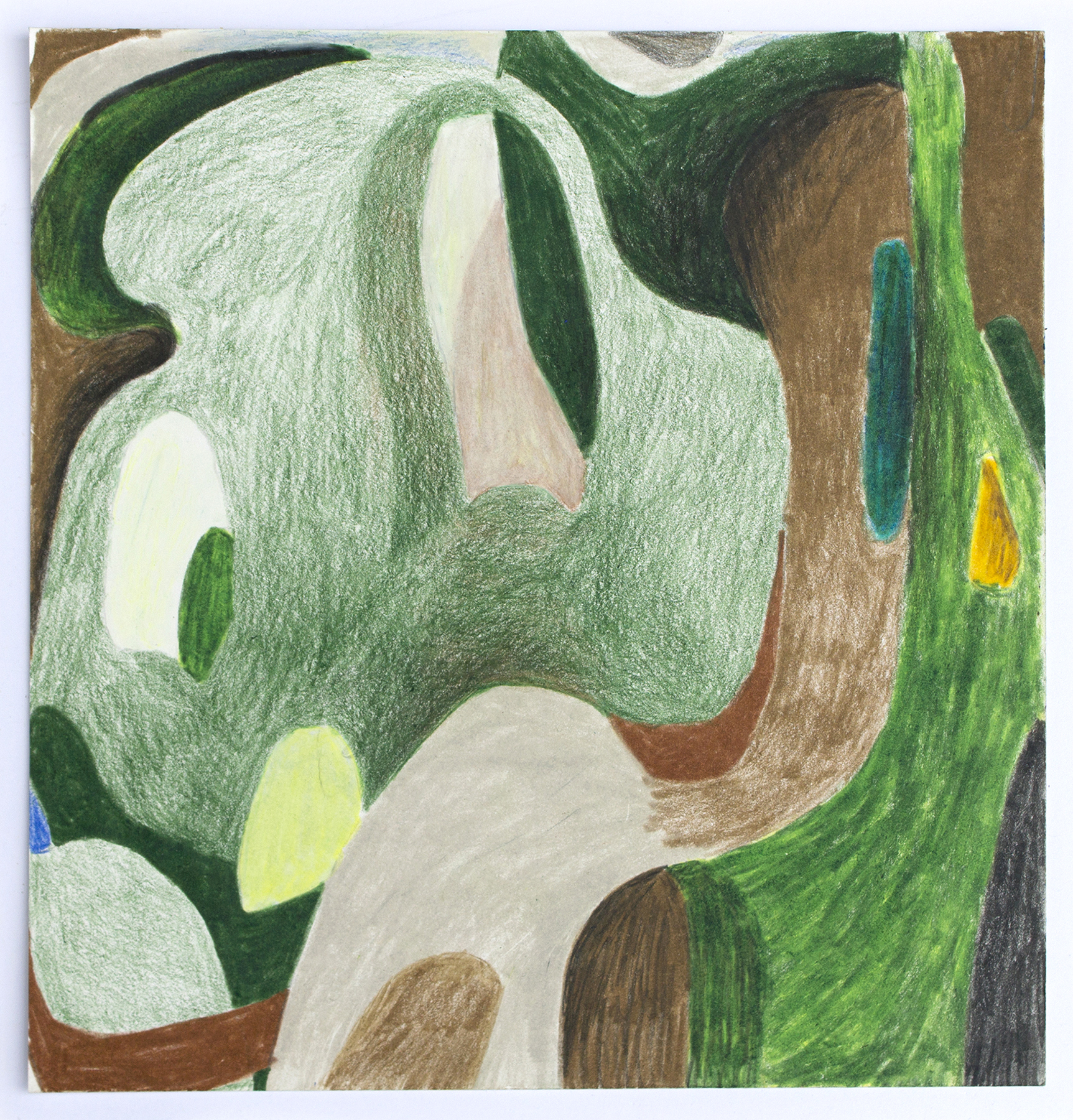 Your work, though abstract, feels bodily and human-like in many instances. Can you talk about this relationship and why these forms come out in your work?

I studied figure painting heavily in undergrad, and I think it is another piece of my abstract language I am using to communicate with. There are shapes I seem to recycle in my work, and sometimes they feel bodily, although not always human. I spend a lot of time trying to capture a mood or hint at something mysterious, and a mark that is suggestive of the body can be a great clue pointing towards one thing or another. I had a good studio visit with Wendy White when I was at the Vermont Studio Center in August, and we discussed the revival of the figure that seems to be reverberating through American painting at the moment. We were musing about the pushing against the frame, or figures wrapping back around themselves and how it could be a self-reflection of the confusing identity “American” has become. I’m still deciding if this applies to my work, but I do think I’m very curious about what being a painter in America means right now. Having lived on opposite sides of an incredibly large country has highlighted just how vast the United States is. 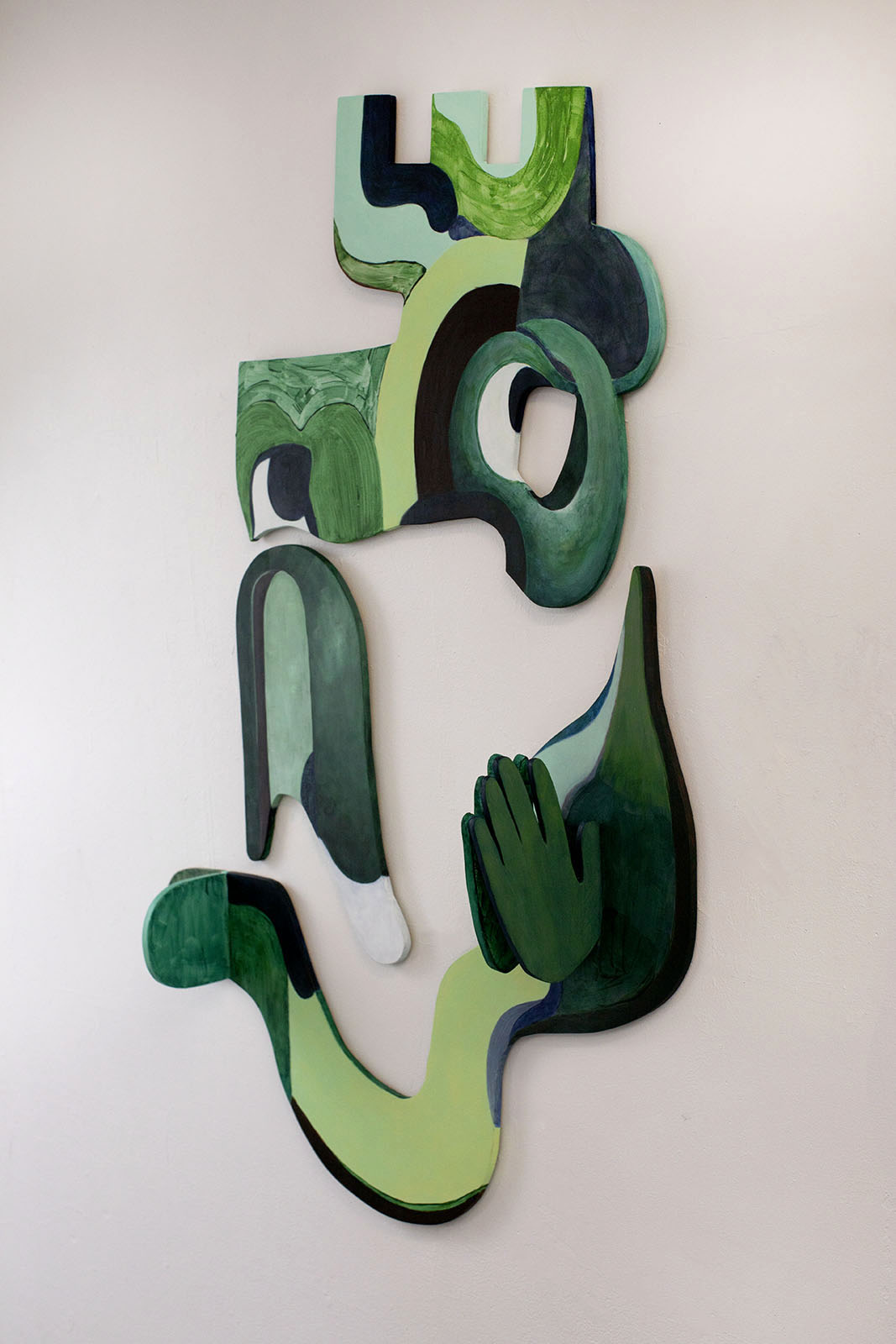 You’ve dabbled in a number of artistic realms – painting, installation, and sculpture to name a few. What is your relationship to each? What is your practice focusing on now?

My approach to art has always been very holistic. Abstraction to me is wonderful because I can make my own rules and language with it. I think I struggled in school against the parameters of every “medium” of art I studied. What interests me most are things like positive and negative space, shapes, color, and the interaction between them all. I studied painting in undergrad but got my masters in sculpture. The last couple years I’ve settled back into making paintings that sometimes have three-dimensional elements. It’s both a choice of practicality (storing and moving sculptures around in NYC is very difficult) and a result of a renewed fascination with the medium. I’ve fallen in love with making my own paints and am enjoying experimenting with cutting shapes out of wood to paint on, in addition to working on canvas. 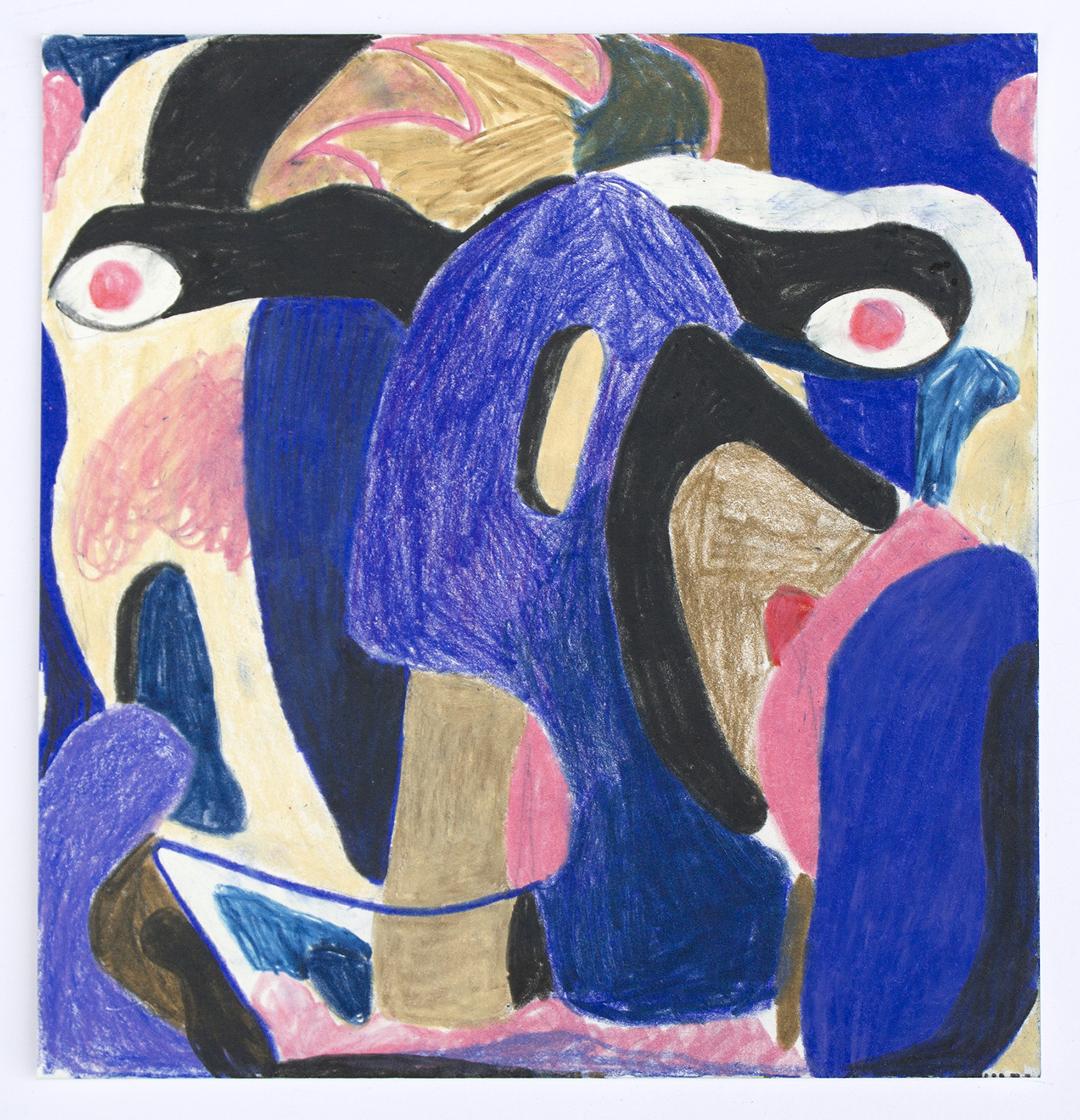 What source material inspires your work?

I spend a lot of time looking at shapes, both in natural and man made things, and the relationship between them and their surroundings. I saw some moss in a tree the other day that absolutely stunned me, while I was hiking with some friends on San Juan Island. Music, comics and poetry also fit in there somewhere. I spend a lot of time writing poetry and I think it exists as a hidden parallel to my work. I work out ideas there and often source my titles from there as well. I also have an affection for modular toys and old children’s books, Dr. Seuss in particular. The offset quality and color of the prints from the 40s and 50s are wonderfully psychedelic. 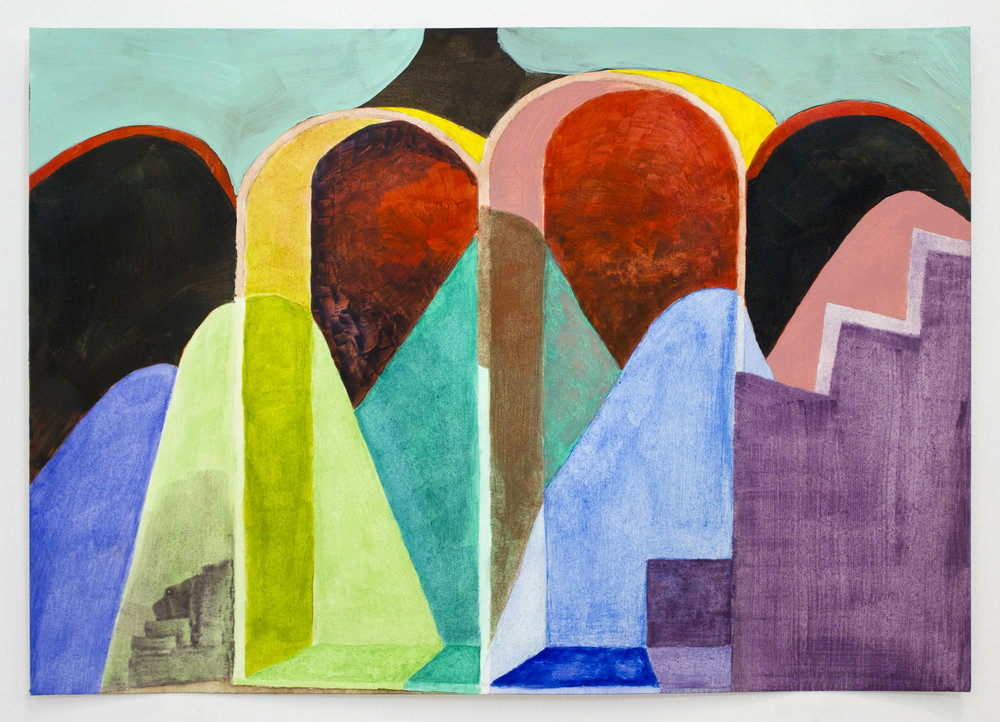 It’s one of those things, you know, that you can forget exists until you run smack into it again. I think for me especially–I’ve always been a bit of a tomboy–the glass ceiling can really be more like a sliding glass door I run smack into chasing the boys. I think the gaps in history caused by underrepresentation are truly tragic. There are a lot of incredible artists, alive and dead that are not being seen, because of their gender, race, politics, whatever… and you have to wonder what we all would be making if we had been exposed to it. I would say my biggest encounter with it is trying to keep the conversation–whether at openings or in my studio–on my work, and away from personal topics. I’m grateful to be surrounded by people of all kinds and to be able to have conversations with them about it.

Have you noticed a change in opportunities available for female artists since you first entered the art world? If you could change one thing about the current landscape for working female artists what would it be?

I think across the board things are improving, and I’m very proud of my peers for trying to instill change wherever they can. I’ve seen a lot of focus on expanding opportunities for women, people of color, and LGBTQ artists in the last couple years, and it is exciting to see new windows opening up here and there. I would love to see the diversity that results from this being absorbed into more solo and group shows and galleries all around. I’m part of a women’s curatorial group and it’s been really inspiring to talk with all of them about their experiences as curators, and to see the visions they have for the future of the art world. 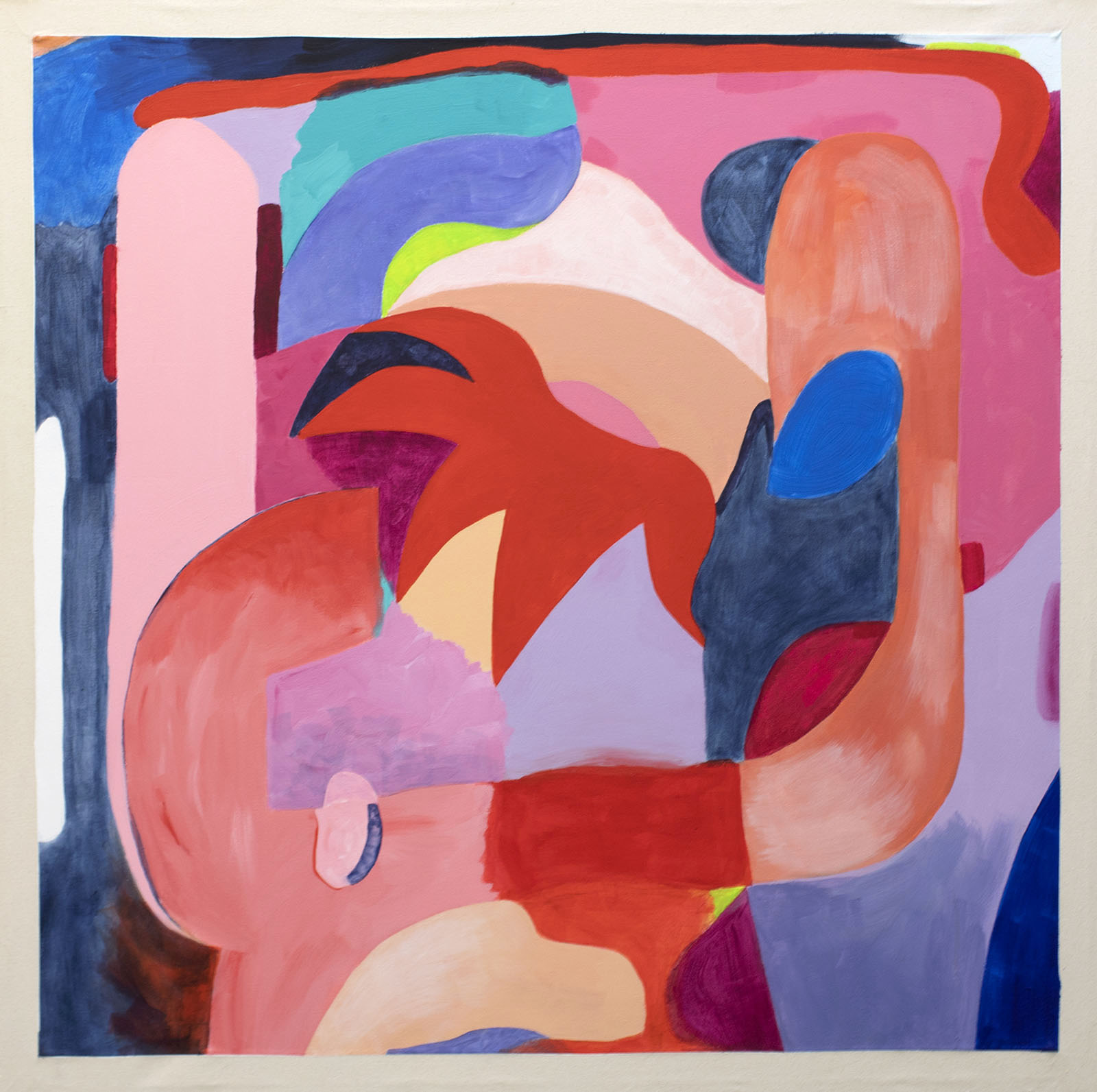 You’ve spent time on the business side of art, hosting your own exhibitions and putting on a booth at SPRING/BREAK Art Show. Can you talk about your interest in promoting other artist’s work and how it might affect your own work?

I’m part of a curatorial team with my friend and fellow artist Til Will, and we curate under the name Open House. The project has changed a lot over the last few years, we’ve done artist interviews, exhibitions, art fairs, show reviews… a lot of things. These days we focus mainly on curating emerging art. Curating, to me, has always been another art form, and I think it’s really cool to be able to contextualize and pull a variety of work together to highlight something important happening at a moment in time. There’s some really interesting painting happening right now, in NYC and the rest of the country and it’s been exciting to work with artists from all over. Not being the artist gives me space to take risks with curating that I would normally be more hesitant to take with my own work. It has also introduced me to a lot of emerging artists and curators, and in turn I think my own work tries to contribute something unique to that scene. 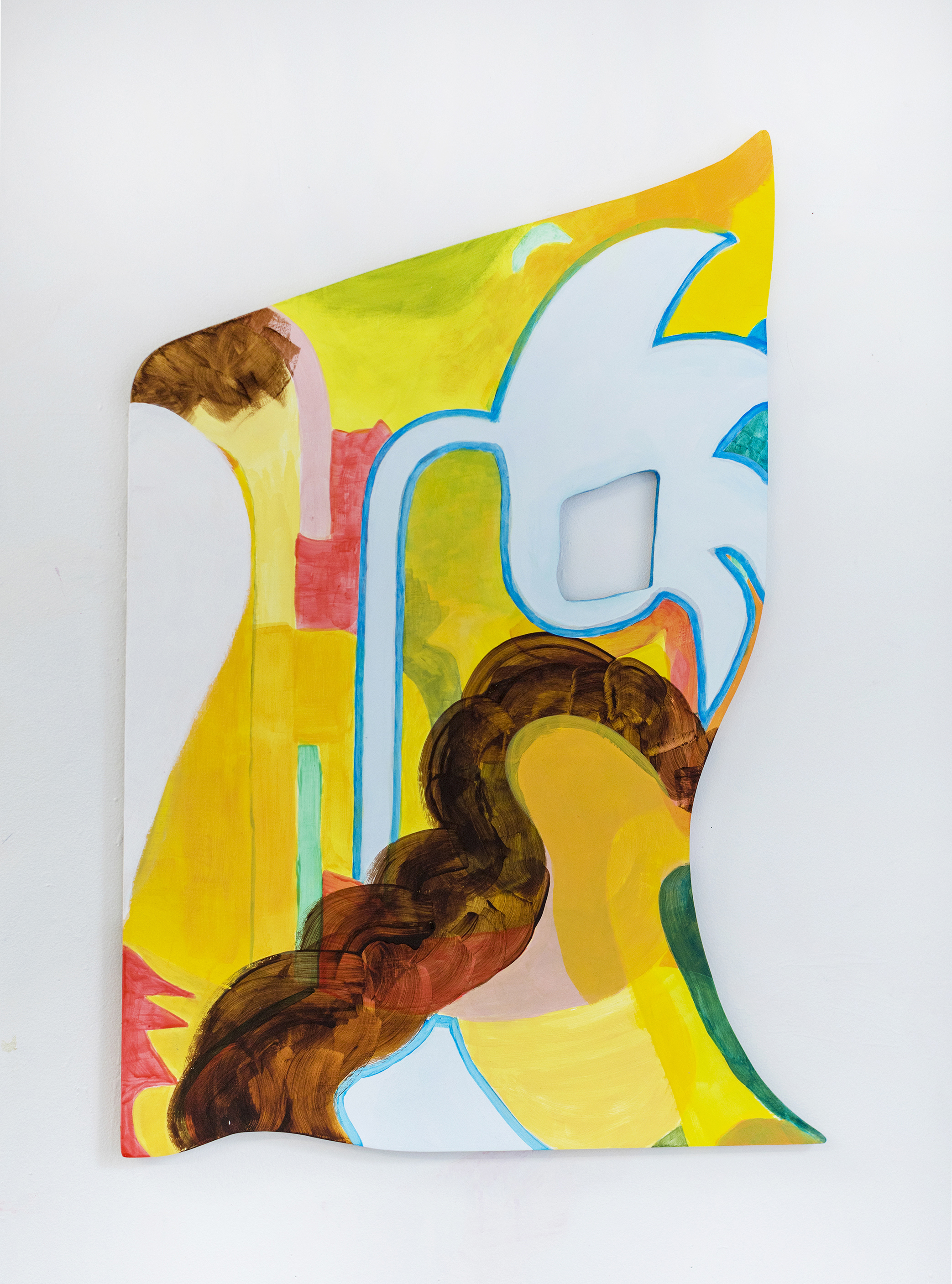 Right now, I’m in Seattle for the month of November, subletting a studio and making some large paintings. I’m also part of an online group show called Flat Rate that will be going live soon and I will have some works for sale on there. I’m looking forward to working more with wooden shapes in my paintings and also working larger while I’m away from NYC. The current paintings are about 5 x 5 feet. I’m excited to return to NYC in December and get going in my studio there again! 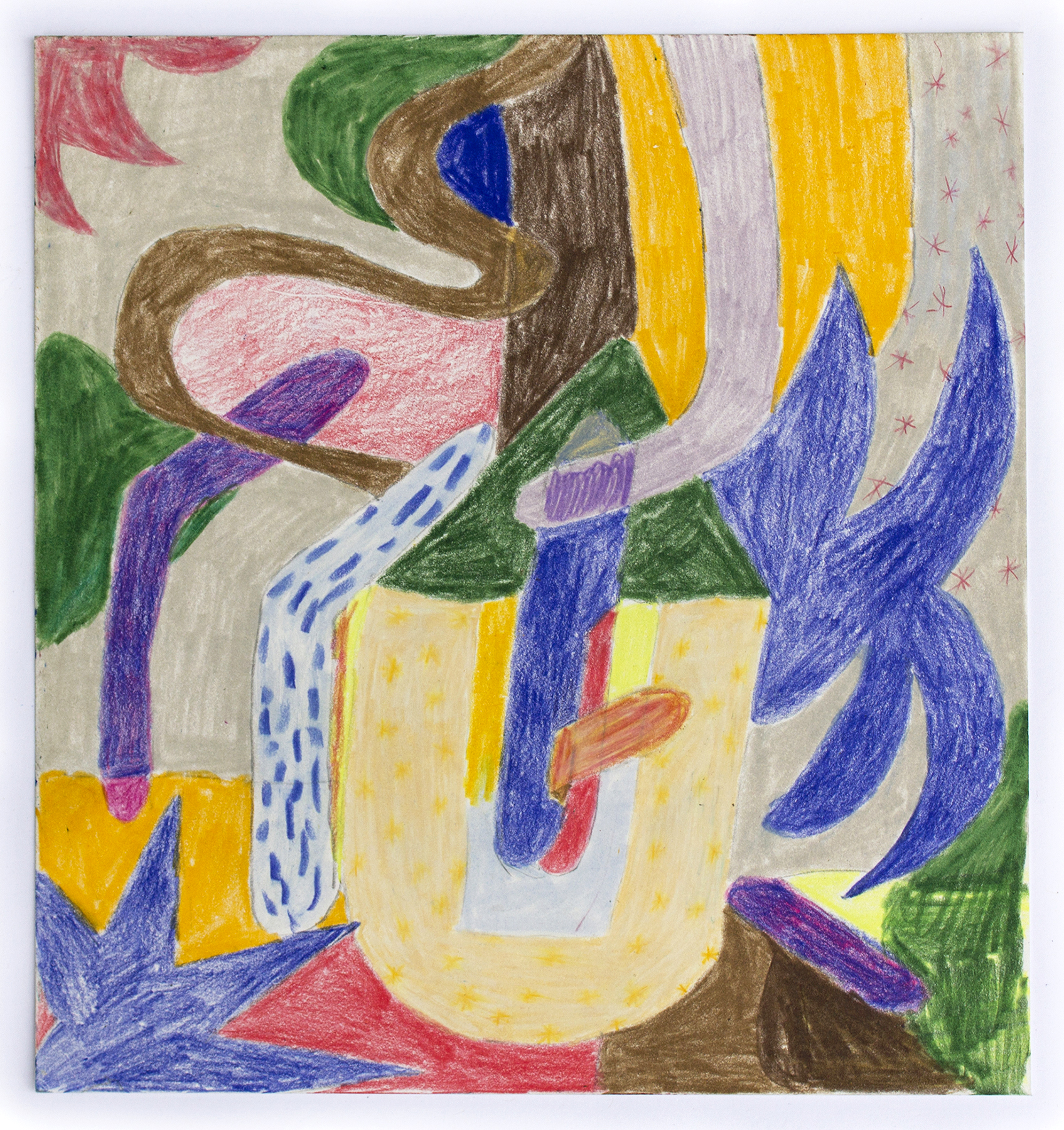 I would love to point you in the direction of Drew Miller. I’ve known Drew for a long time, and I think his work is incredibly interesting and spans a multitude of mediums, including painting, drawing, zines, furniture and much more.

Til Will is an NYC artist who’s making some really interesting things right now. He is my co-collaborator at open house, and he’s making some really wacked out paintings on a self-appointed residency in Spain at the moment. He is also a carpenter and clever DIY furniture expert.

Paz Mallea is a NYC painter, who is also in Spain at the moment making some incredible paintings. Her abstractions are other worldly and at times encompass the figure as well. She is also a badass muralist and makes zines, patches and t-shirts.