Discovering Nostalgia in the Digitized World

Boston’s Lanoue Gallery presents an exhibition filled with works by contemporary artist Paul Rousso. This exhibition displays Rousso’s sculptures taking note of media and technology cultures overpowering the age-old commodity present in everyone’s lives: paper. Digitized everything is overriding tradition. However, Rousso is making note of how the simplistic object that is paper is a form of expression. In the Lanoue Gallery, Rousso’s works display paper transforming from a two-dimensional object into an object elevated towards three-dimensionality, making its way into a viewer’s space. By taking not only paper, but well-known objects made out of paper, Rousso crumples, folds, tears, and overall distorts this seemingly simple product.

The first series of objects Rousso transforms are a series of cereal boxes. On view in the gallery are well-known, childhood cereal brands that are somewhat unrecognizable. The popularized brands are Fruit Loops, Rice Krispies, Corn Flakes, and Raisin Bran. All familiar products to anyone of any age, these cereal boxes might seem flat from a distance, but to a viewer, the cereal boxes jolt out from the wall, invading a viewer’s space. 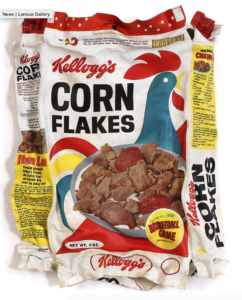 In a recent interview, Rousso stated, “Print still seems to be on its way out. Someday, a kid is going to be standing in a museum and he’ll point at that and say, ‘Mommy what’s that?’ Print brought us out of the Dark Ages, and then it’s over. It may be the comics or the money or the book pages I’m connected to (in a nostalgic way), but it’s really about all of this stuff, which is all just ink on paper.”

Rousso makes note that print is making its way out the door, which is why another set of works focuses on just that: print outlets. Newspapers and magazines used to be one of the most profitable industries; one would wake up and grab their morning paper; however, this has most definitely changed. Most consumers access their newspapers and magazines not at the nearest bodega, but on their phone, computer, or tablet. In Rousso’s work titled New York Times Arts 04-03-18, Rousso shows the New York Time’s Arts section crumpled up. Rousso is questioning what has happened to the print industry and why people have diverted from it in recent years. 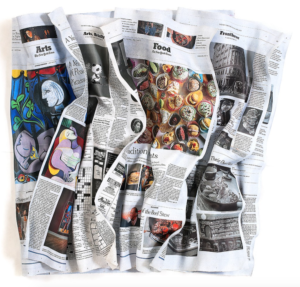 Most of Rousso’s works are open to interpretation; however, there is one word a viewer should take note of when analyzing them: nostalgia. Rousso’s overall aim is to evoke a sense of not only nostalgia, but appreciation for what used to be a commodity in everyone’s lives.