Dominique Fung‘s paintings are a splendor for the senses. Drawing influence from her Chinese background, Fung turns centuries old tropes on their head to make statements about modern day life as a woman. Full of rich color and a visual exuberance, Fung’s works evoke a classical essence while making their own original mark. The Brooklyn-based Fung is in the midst of a breakthrough year, with two stand-out solo exhibitions at Ross+Kramer in New York and Taymour Grahne in London. In 2020 Fung will be the subject of a solo exhibition at Nicodim Gallery in LA. 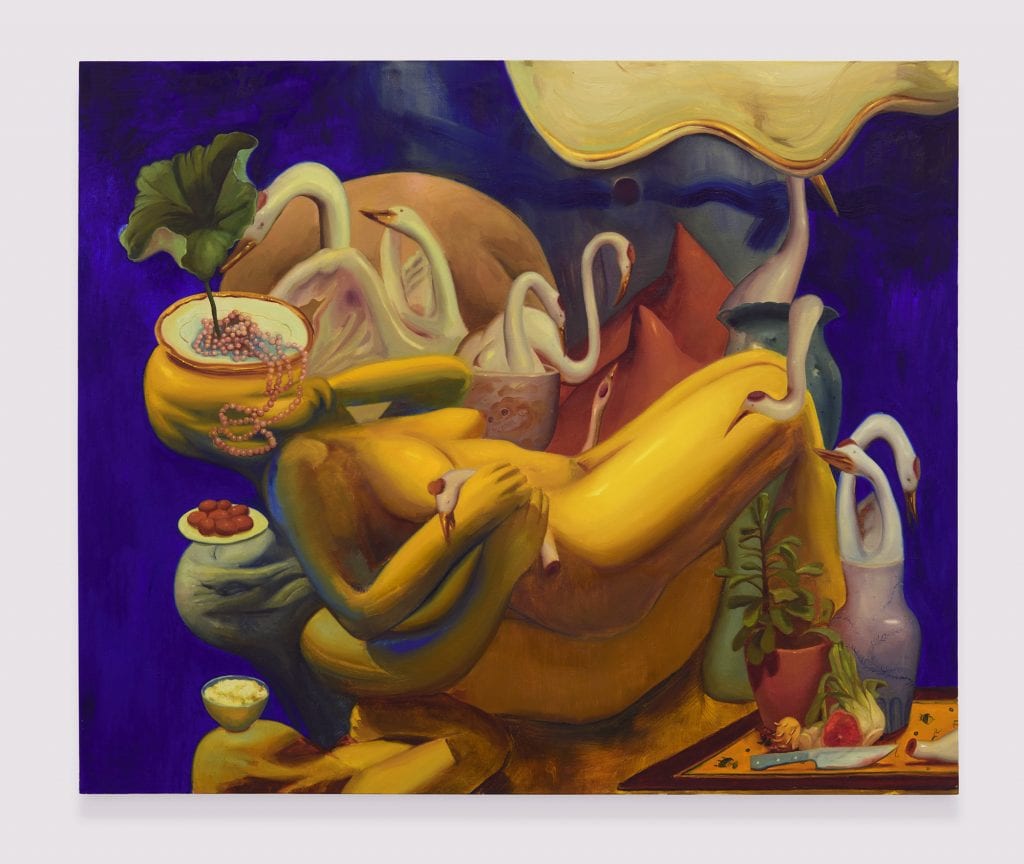 What kind of stories does your work aim to tell?

My work focuses on the inquiries into the human condition of untold stories of peoples, beings, bodies and objects. I think often about self-made mythologies and how I can interrogate and investigate past untold histories, traumas, liberations and experiences. 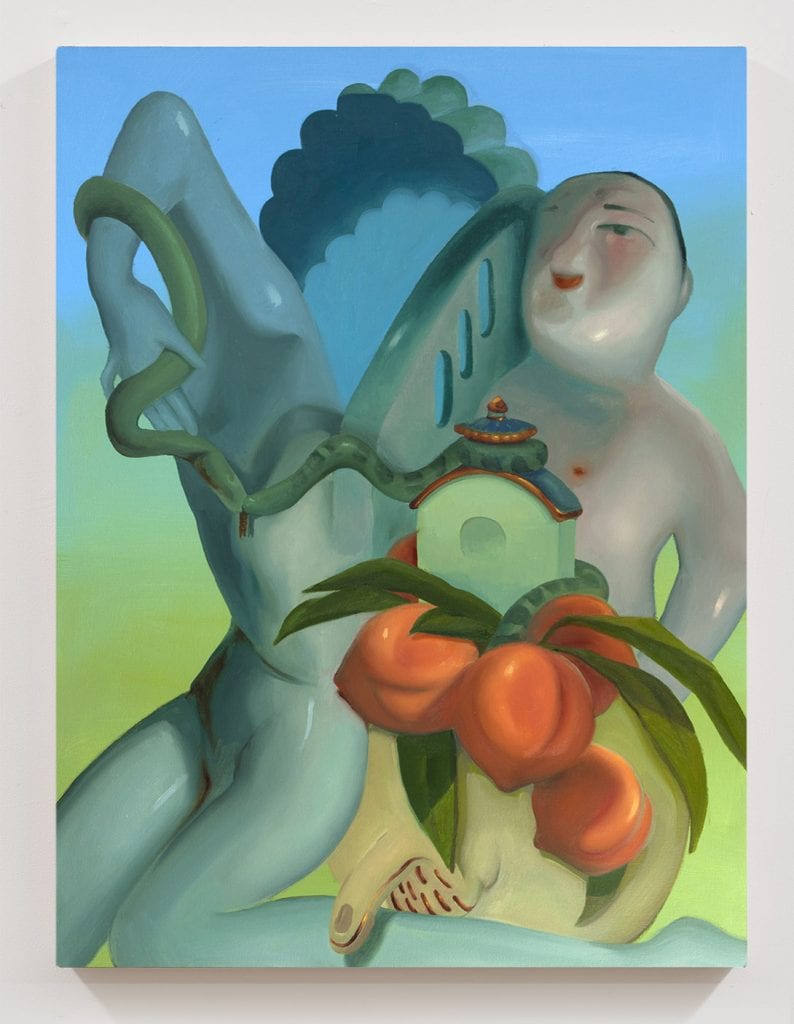 Your work often repeatedly employs a vessel motif. When did this aspect first enter into your practice and what is its significance?

I’ve been paintings vessels such as tea cups, tea pots, vases and historical artifacts for approximately 10 years now. My initial inclination to paint them was purely instinctual and perhaps was a way for me to grasp at my own family history. The objects were initially painted as unconscious ideations simply placed into the picture plane to either fill space or to somehow give the figures meaning. Over time, they’ve become much more significant in my practice and have developed into protagonists of my work.

Functional vessels have a domestic usage or have domestic connotations to where they belong. Depending on the object you can place a time and location to where they are made. My initial interest has centered around the idea of an untold history or narrative of these objects. Signifiers of a vessel and antique objects from Asia on most part are considered ethereal, mystique, an object of value and at the same time kitsch, a hack eyed trope. The dualities of object and personhood mirror the experience of the Asiatic women who historically have been spectacularized, fetishized, disregarded, sold and abused. 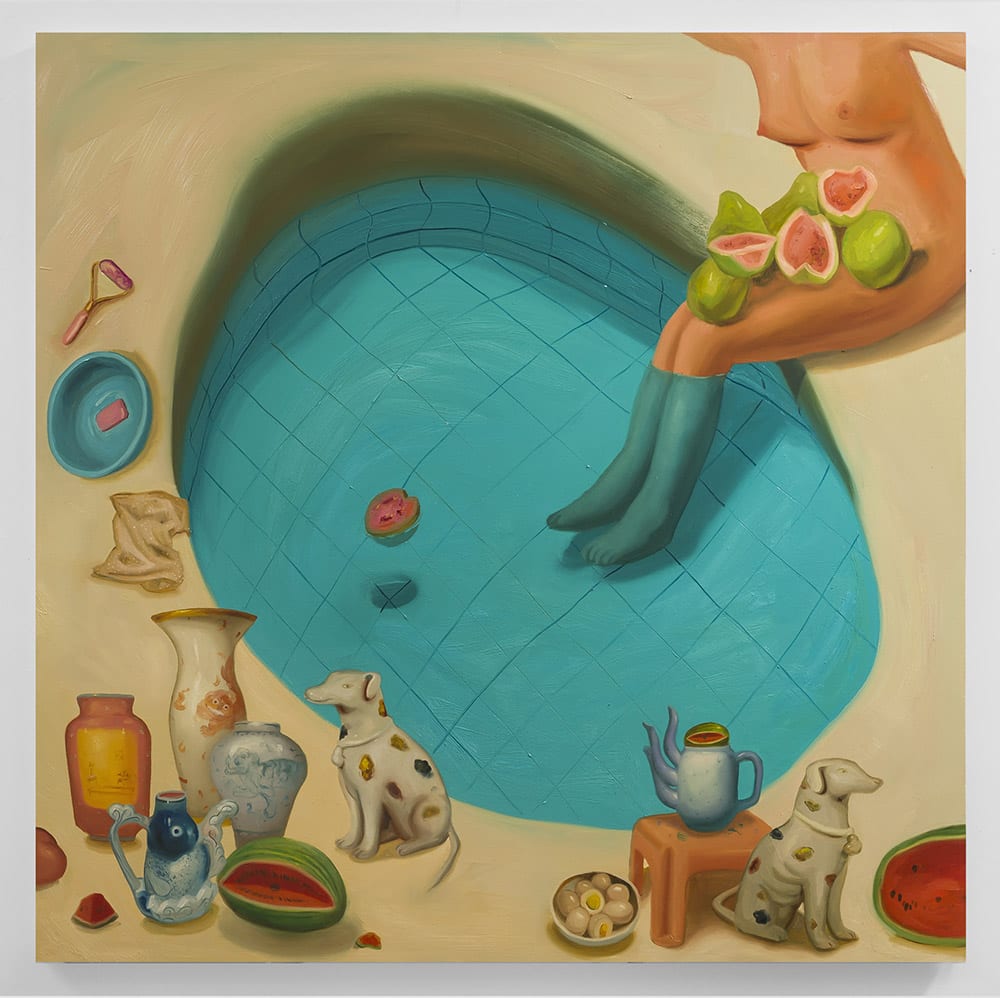 I have a live / work space and there is no commute necessary at the moment which is perfect for the impending winter season. However, that leaves me with very little separation between home life and studio life. I’m usually up at around 9:30-10am, meander for an hour and spend way too long on emails and social media aimlessly scrolling (a habit I’m working on changing). I have my coffee, walk the dog and begin reading, sketching or painting by around noon/1pm. I work until 10pm/midnight with several breaks throughout the day. 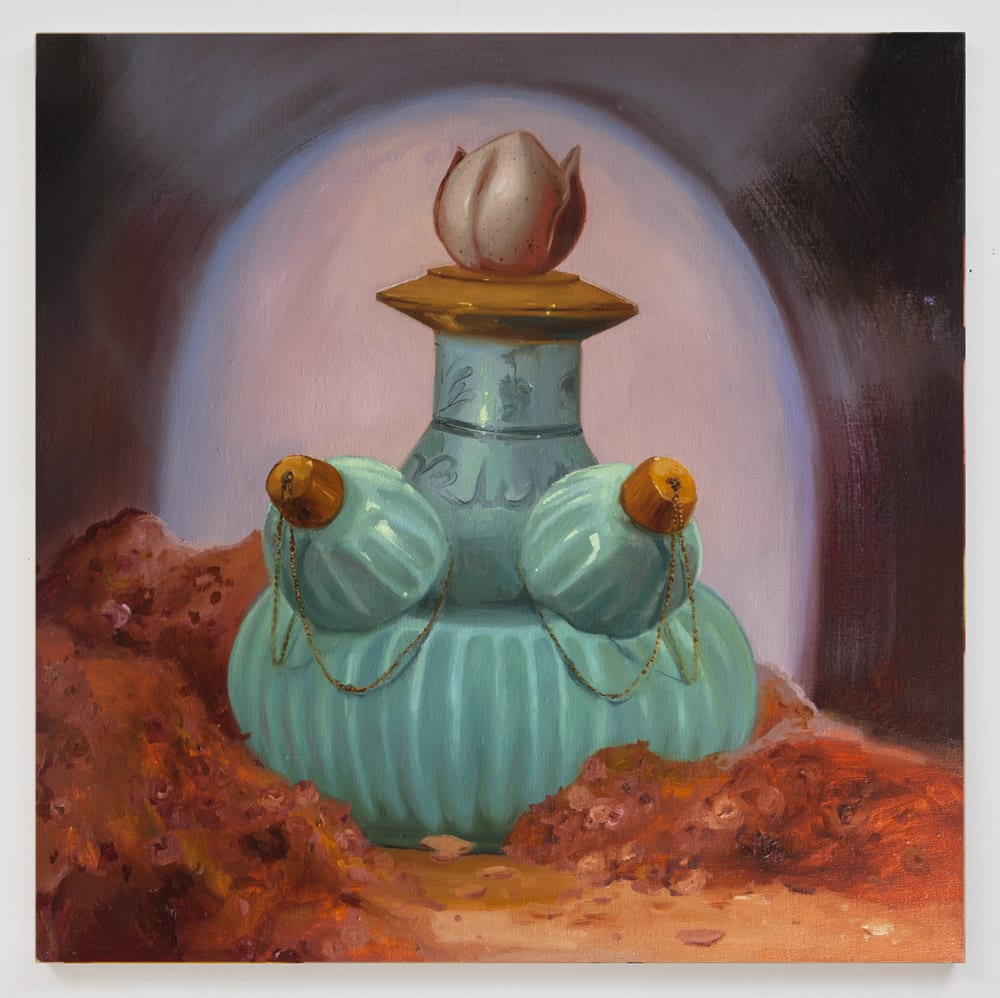 What other artists most inspire you?

Do you look at any source material when thinking of what scenes to construct?

Yes, my source material comes from photos I take on my phone, images of objects on antique auction sites, images from Ebay and pictures of artifacts from museums. 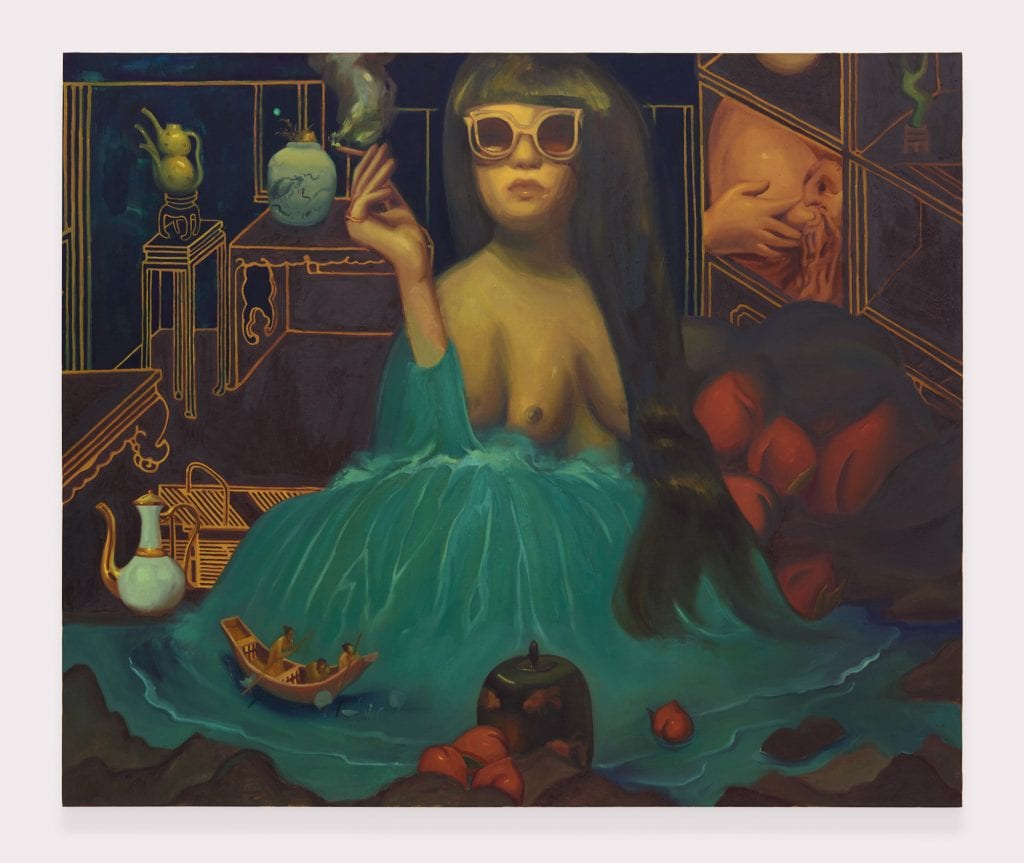 Can you tell us a little about your standout solo exhibitions this past year at Ross+Kramer Gallery (NYC) and Taymour Grahne (London)?

In both exhibitions the overarching ideas I was working through were: what makes a person, a person and what makes a thing, a thing? Questions that examine the subject-object relationship, where a subject is characterized as an observer and an object as a thing observed.

“Wash Your Corners”, the works exhibited by Ross+Kramer Gallery was created over a year-long period. I painted 10 paintings, made some sculptural work and I teamed up with a curator, Ché Morales to create the flow of the exhibition as well as an installation. 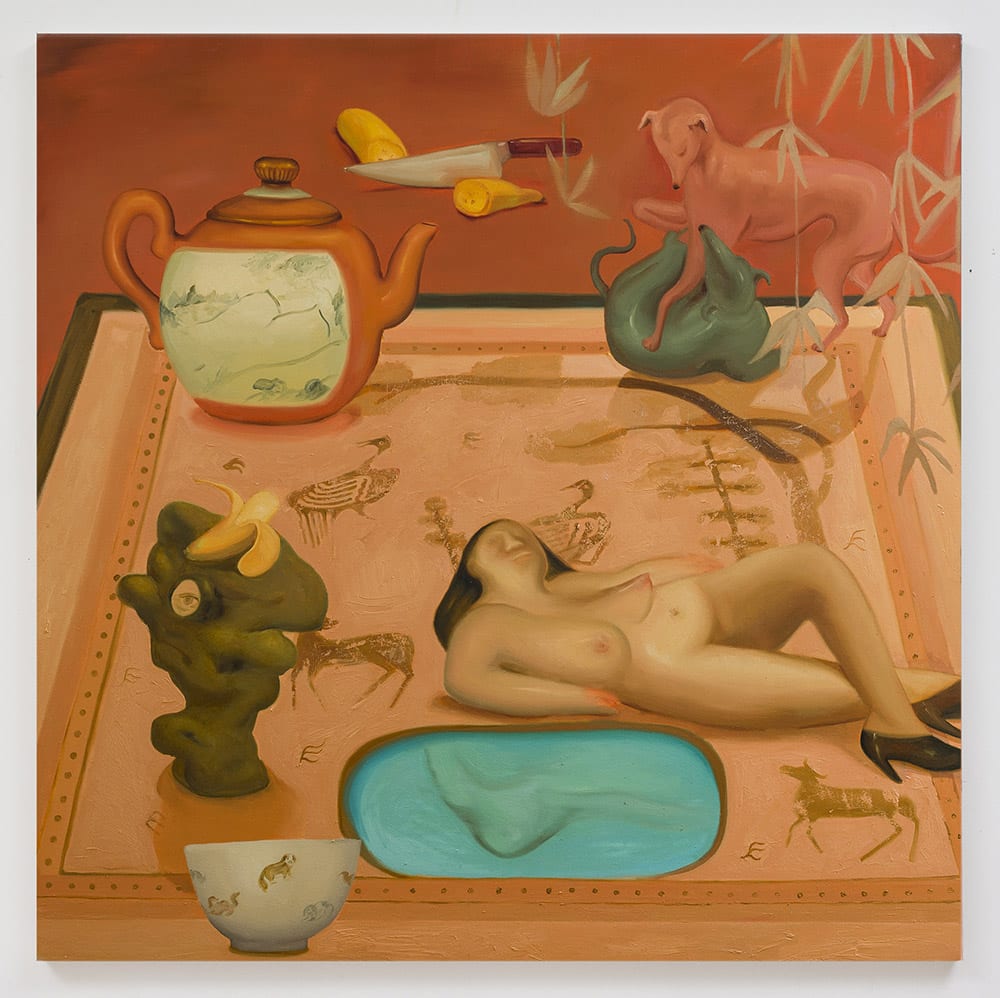 The focus behind this body of work was first conceived when I went to several bathhouses in Asia. Upon returning home, I was determined to find a similar experience and luckily there are some incredible Korean bathhouses in New York. I liked the idea of these accessible communal spaces where people and families will stay the entire day to interact with each other, with food, with gem stone rooms, lounging in uniform and lounging in the nude all the while you are in a place surrounded by plants, vases, sculptures, old lazy boy sofas, board games and traditional Korean spa furniture. It’s familiar and otherworldly at the same time to feel completely isolated and still within a metropolitan city like New York. This feeling is what I was grasping for in my painting, the exhibition space, as well as the installation.

The European Art History cannon has only depicted bathhouses in “the east” as a place where harem women, fantasy, corruption and deceit can flourish. These paintings were a form of othering an entire group people and objects as many of these images were painted with seemingly detailed accuracy and was brought back to places like France and England. The body of work in “Wash Your Corners”, was created in thinking about these inaccuracies and to give a new narrative or to highlight these inaccuracies.

The Taymour Grahne exhibition, “Looking Backward, Moving Forward”, was a continuation into the exploration of these objects. I was less focused on these interior bathhouse spaces, rather focused on objects that would inhabit an interior space. The vessels in this body of work have become more animated and are growing limbs and body parts. 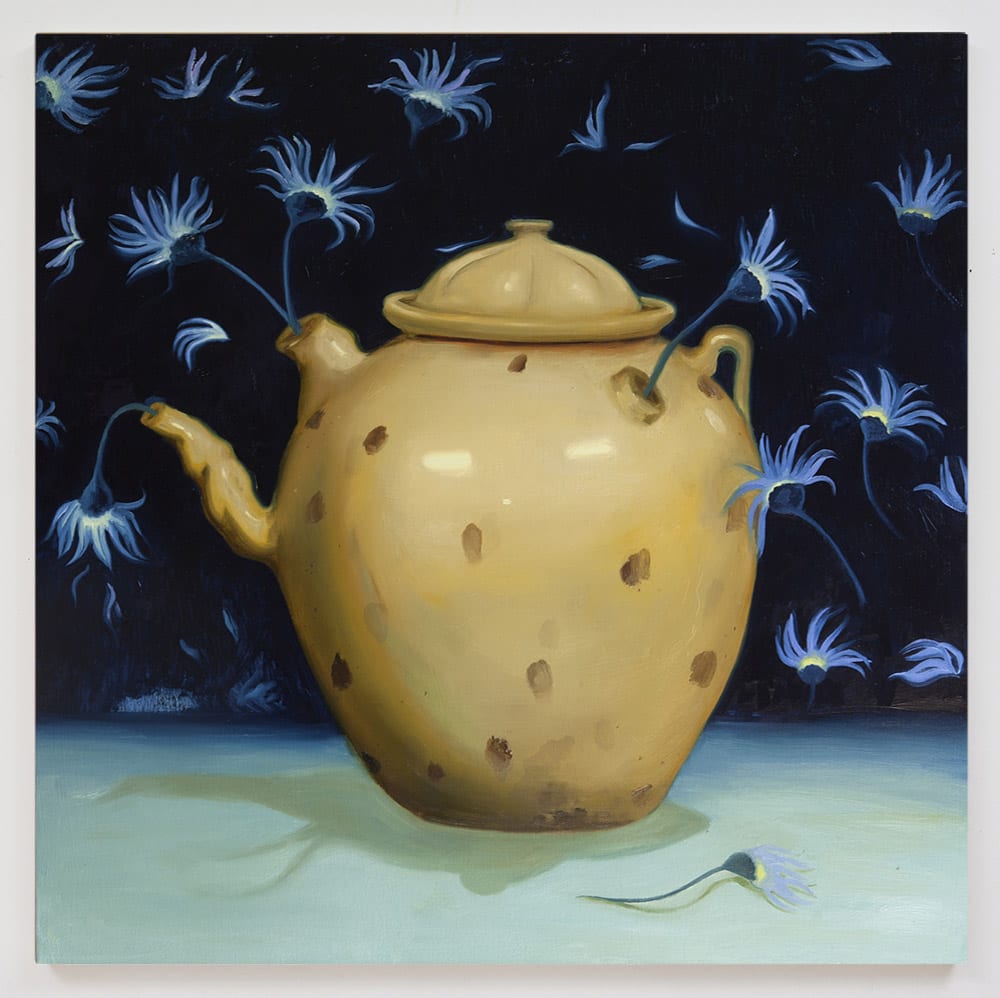 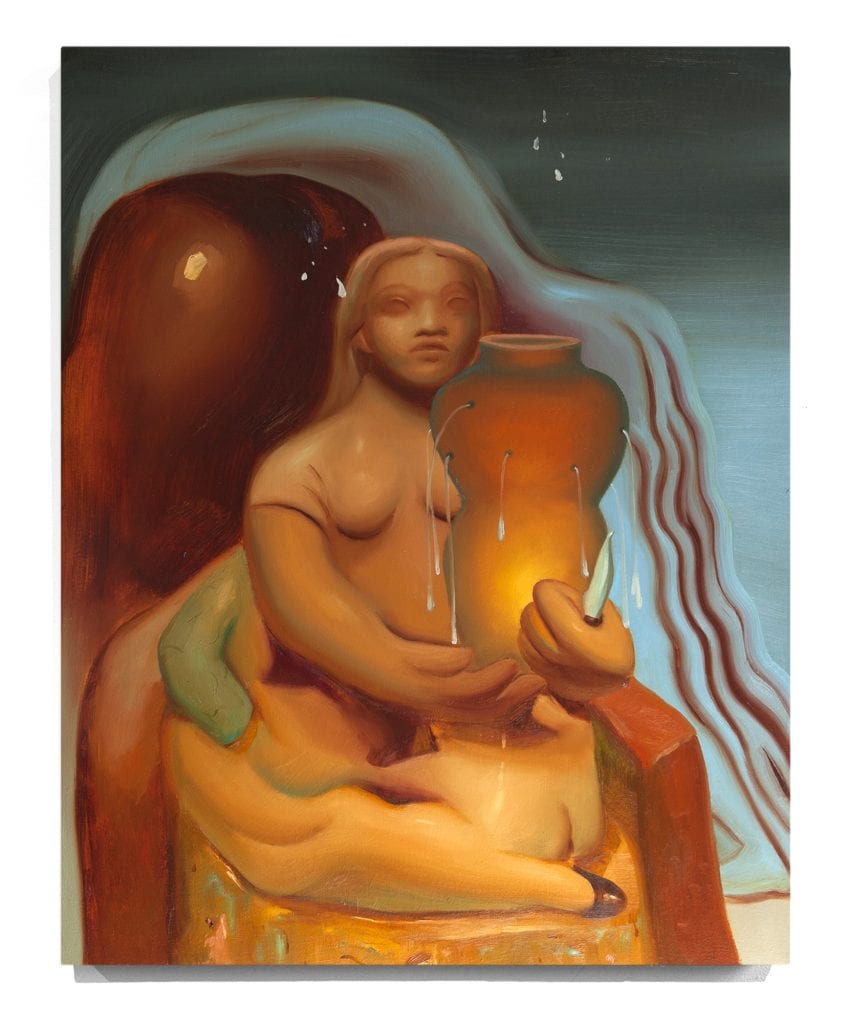 What artist do you recommend we interview next?