Elizabeth Glaessner’s work is a quintessential mix of beauty and fear. It is easy to get drawn into her works with their striking colors and compositions, but what keeps the viewer’s attention are the dark motifs that appear on the surface. Patterns and figures that at once seem familiar take on an eerie, other-worldly feel. Here, we chat with Glaessner about her experience as a female making it in the art world, her role models, and of course, how her distinct compositions came to be. Glaessner is represented by PPOW Gallery, where she had a solo show, Mother Tongue, in early 2018. She lives and works in Brooklyn, NY.

It’s a big part of my life in NYC. I feel lucky to have the support of a community of mostly female artists, teachers, gallerists, mentors and friends. I also participate in a crit group that gets together once every few months for a studio visit and book discussion. Maintaining an open dialogue with these artists whom I respect and admire is a source of inspiration and empowerment.

I’ve certainly witnessed it, and I think the issue goes beyond gender. There seems to be more widespread acknowledgement that the art world is not above the sexism, racism and exclusionary politics that is rearing its head under our current administration. Until a multitude of different voices from different cultural and economic backgrounds are represented, the art world is not an accurate representation of society.

Yes, with activist groups like the Guerilla Girls speaking out with their report card in the 80s (and then pussy galores 2015 report card) and the countless others who have had to fight for their own recognition and place in the canon. Since I moved to NY in 2007, I’ve noticed more galleries, curators, writers and museums making a concerted effort to be more inclusive and representative. But it’s also important to remember how low the bar was to begin with to harness that urgency to make changes. 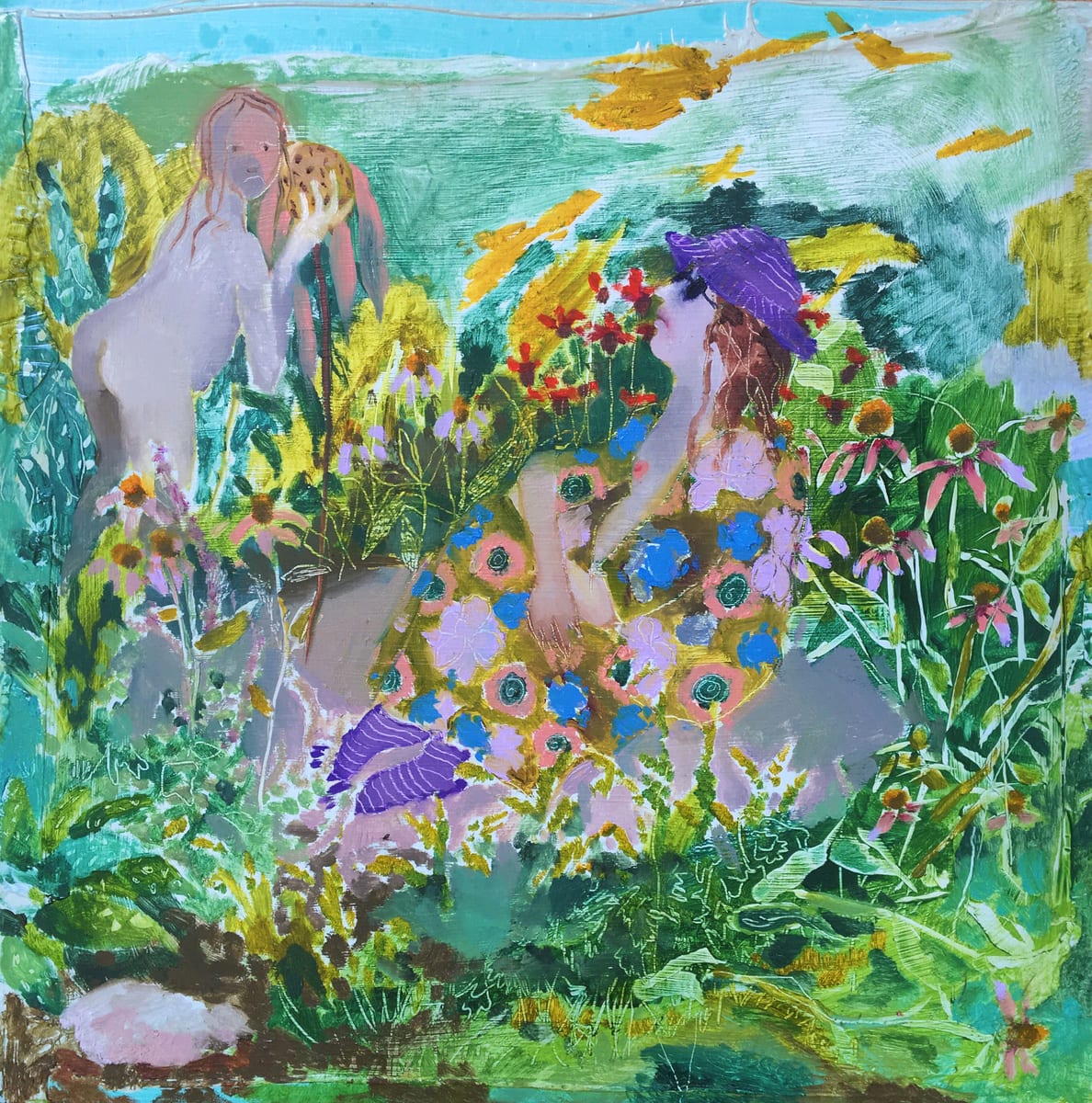 I think that the current landscape needs to be more inclusive overall. Meaning that all facets of the art world (grants, funding, gallery representation, museum shows, collections and collectors) need more racial and cultural diversity, more socio-economic diversity, gender diversity; not just more of one kind, but more of every kind. Of course, I would also like to see more government sponsored opportunities for artists to live and work in the city in a sustainable way – like affordable fixed rents for studios.

What traditional modes of art making do you draw inspiration from in your work?

I’m all over the place in terms of inspiration, depending on what I’m making. I’m been curious about the representation of gender and sexuality throughout history so recently I’ve been looking at 17th century Japanese shunga prints and paintings, Aubrey Beardsley’s illustrations for the yellow book, ancient Mesopotamian artifacts, Egyptian vase painting, medieval folkloric prints and drawings. My silk paintings function differently. I’ve been looking at my grandmother’s twin brother’s textile designs, religious icons, stained glass windows, medieval witchcraft manuscripts. All that stuff crammed with the barrage of imagery we get slammed with every day, current events, music, fashion – it all works tangentially. 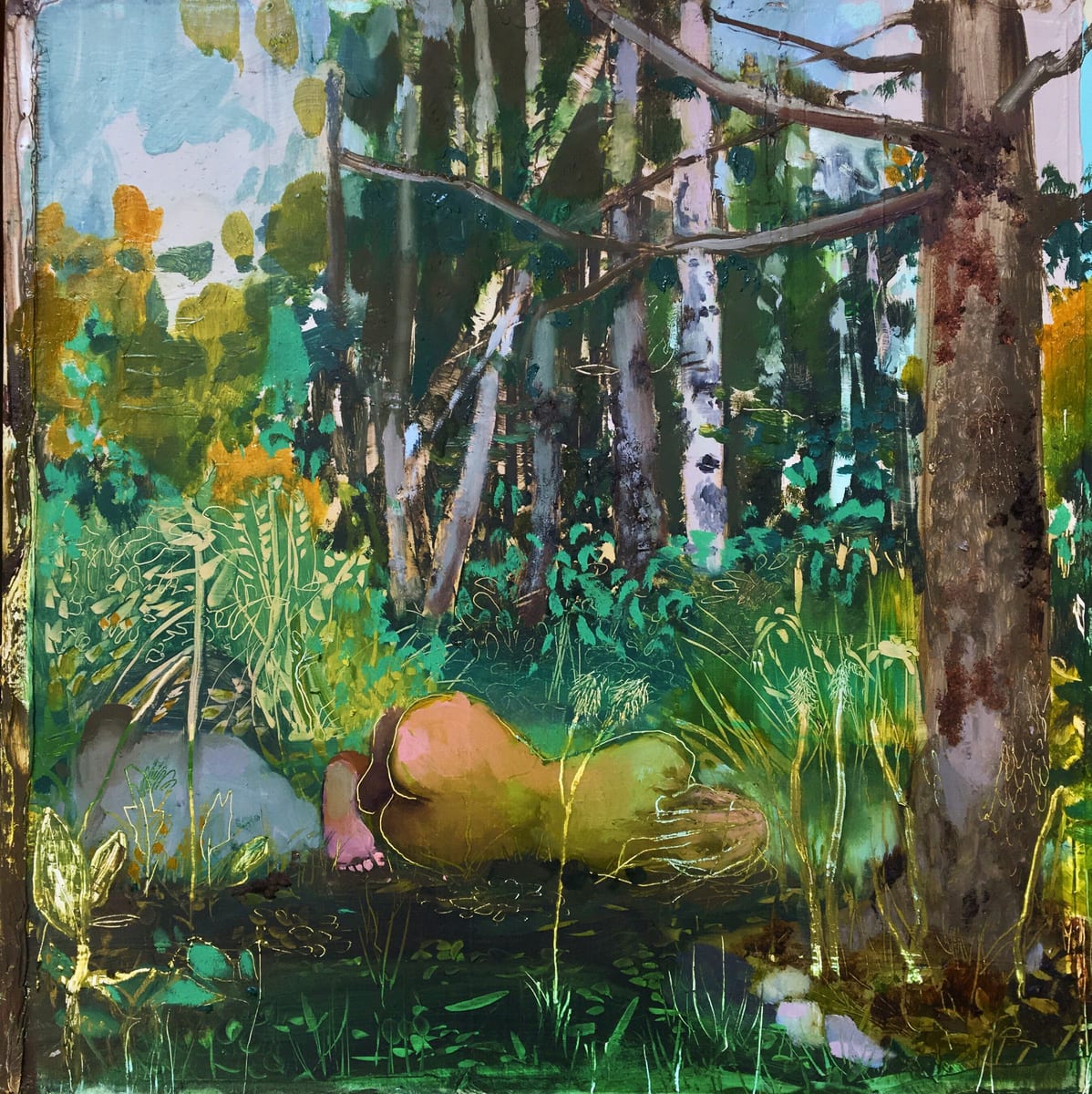 Your work often includes two or more female figures. What does this mean representationally?

There’s a thread of personal narrative running through my work, but for the most part I’m thinking about a parallel space that is reminiscent of but not morally subjugated by ours. In terms of gender, the figures are fluid. The groupings represent protection and exploration. 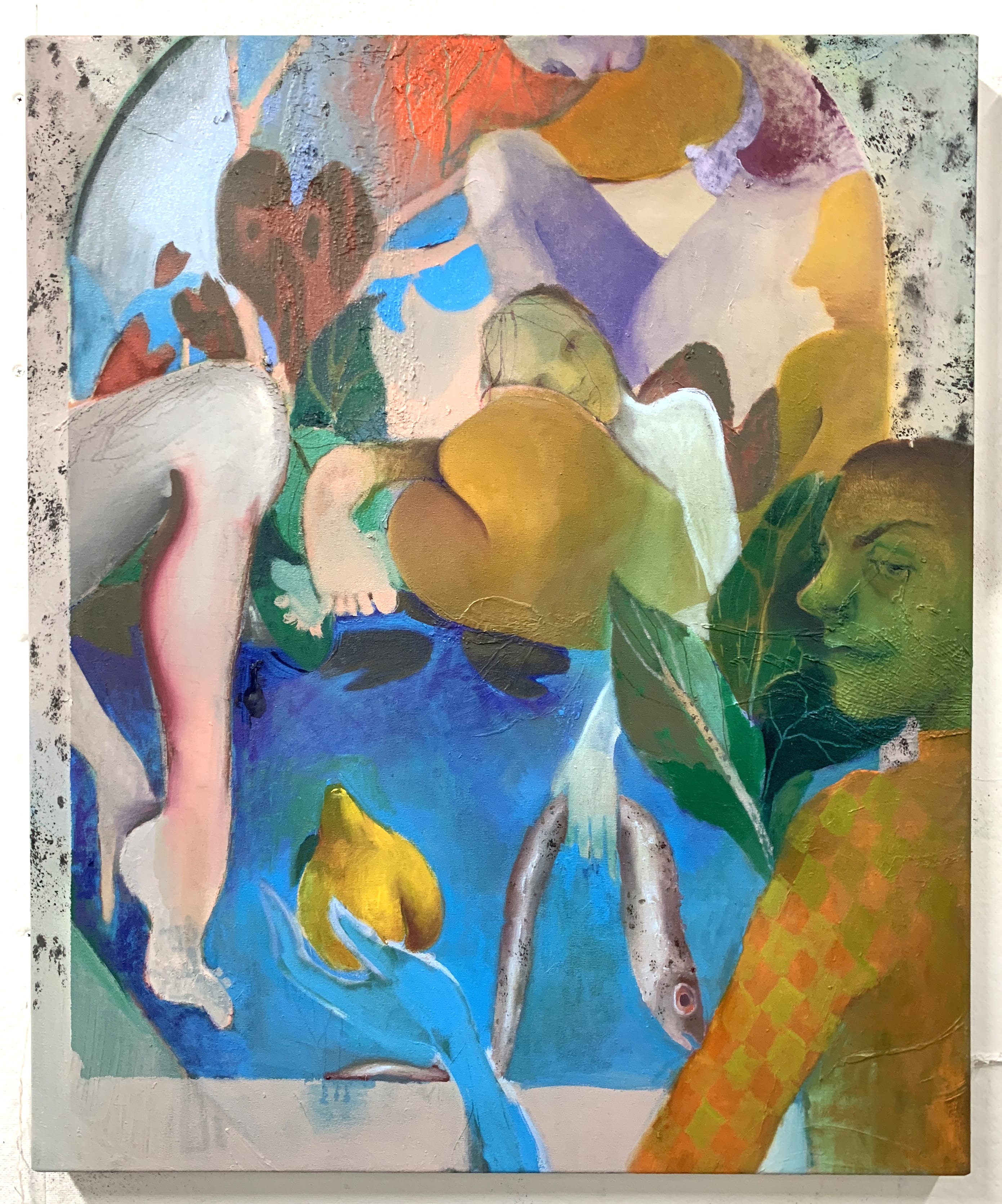 Speaking of your figures again, they sometimes appear slightly grotesque or like a primordial sort of human. Can you explain the choices behind your depictions?

In short – I was exposed to all the sadistic tendencies of Catholicism in my upbringing so that ornate and often grotesque imagery is burned in my brain. And then my grandparents on my dad’s side are Austrian Jews who fled to South America right before the Nazis invaded Germany. I’m not interested in illustrating this history, but I do think that my experiences have sort of shaped my visual language. I make a lot of my decisions as I’m painting so I leave room for the subconscious and the absurd to help shape the narrative.

How do you go about beginning a work? What is your process like at the beginning stages of a work?

It depends on what materials I’m working with and changes each time I start something new. I usually work on several projects at once, so I go back and forth between drawings, paintings, silk paintings, solar prints. For a painting, I generally start with an idea, write down some words or thoughts, make some quick sketches and then gather materials: objects, fabrics, drawings, paintings. I like to paint with a lot of stuff around me. The silk paintings function in a very different way, so my process is different. They’re more planned; I use a textile marker to draw a very basic sketch, then go over the lines with a gutta resist and then paint with the dye. I usually expand on the drawing in layers as I go.

I’m currently working with my friend David Mramor on some collaborative works for a two-person show in Denver this September curated by Brooke Tomiello. And then I’m looking forward to having work in some group shows in NY and Texas next year and then a show in London later on. 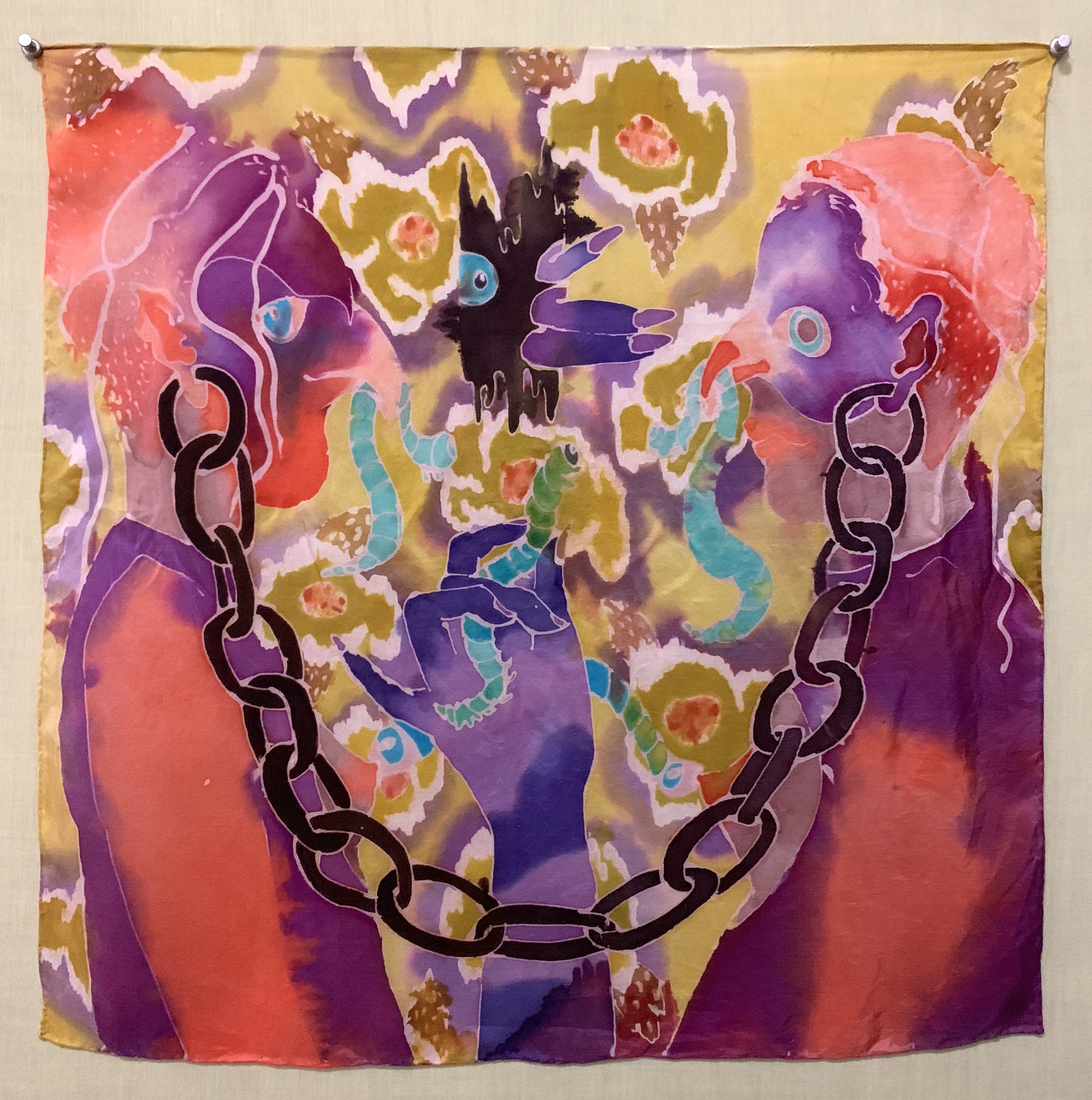 Sense the Multifaceted Layers of New York City in the Work of Devin B. Johnson

Burt Bakman Treats His Restaurant as He Would a Canvas