Emily Ludwig Shaffer takes a flat surface and fills it with multi-dimensionality. Ludwig Shaffer paints surreal elements in a welcoming fashion, inviting the viewer to peer inside a world unlike our own. Her works feel simple to the eye but contain numerous elements to unpack in a fun, game-like fashion. With numerous shows coming up this year, Ludwig Shaffer’s presence is certain to grow. She lives and works in Brooklyn, NY. 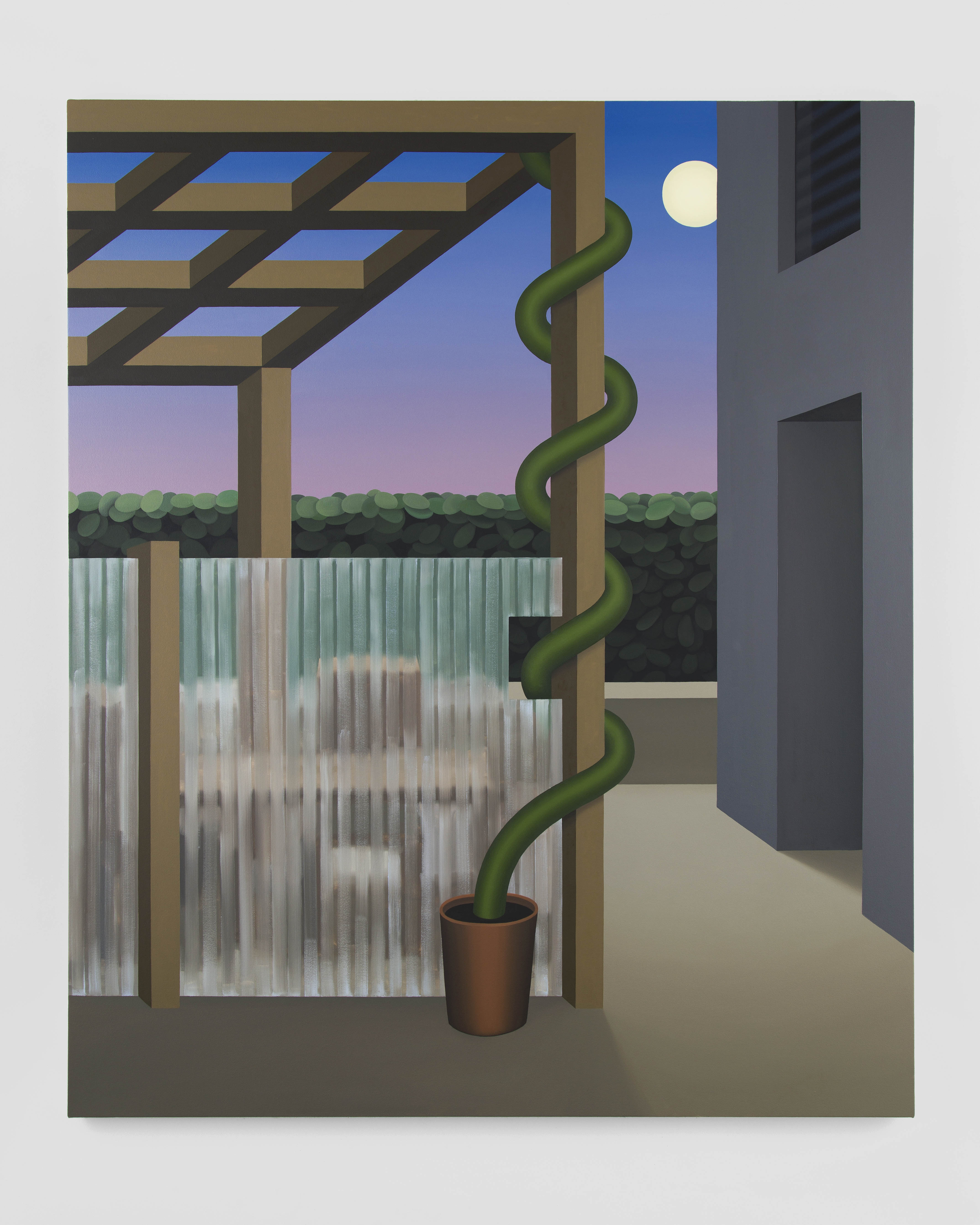 It means so much.  Most of my earlier art education focused on male artists and the male-dominated cannon which could be deeply disheartening at times as a young female artist.  Now, most of the artists whose works inspire me are women with a diverse range of voices. It’s a much more generative space to be in and has given me a lot more confidence in my own work and interests.

Oh, so many! The classics, of course, like Louise Bourgeois, Georgia O’Keeffe, Frida Kahlo, Anni Albers.  I’ve also been a fan of Hilma af Klint and Tarsila do Amaral for years so it’s rewarding seeing them both get New York museum retrospectives in 2018.  Christina Ramberg. There’s so many more contemporary ones, but to name just a few: Françoise Grossen, Kathleen Petyarre, Elaine Cameron-Weir, Andrea Zittel, Pippa Garner, Howardena Pindell, and I work one day a week for Mira Dancy right now – I’m very inspired by her work and approach. 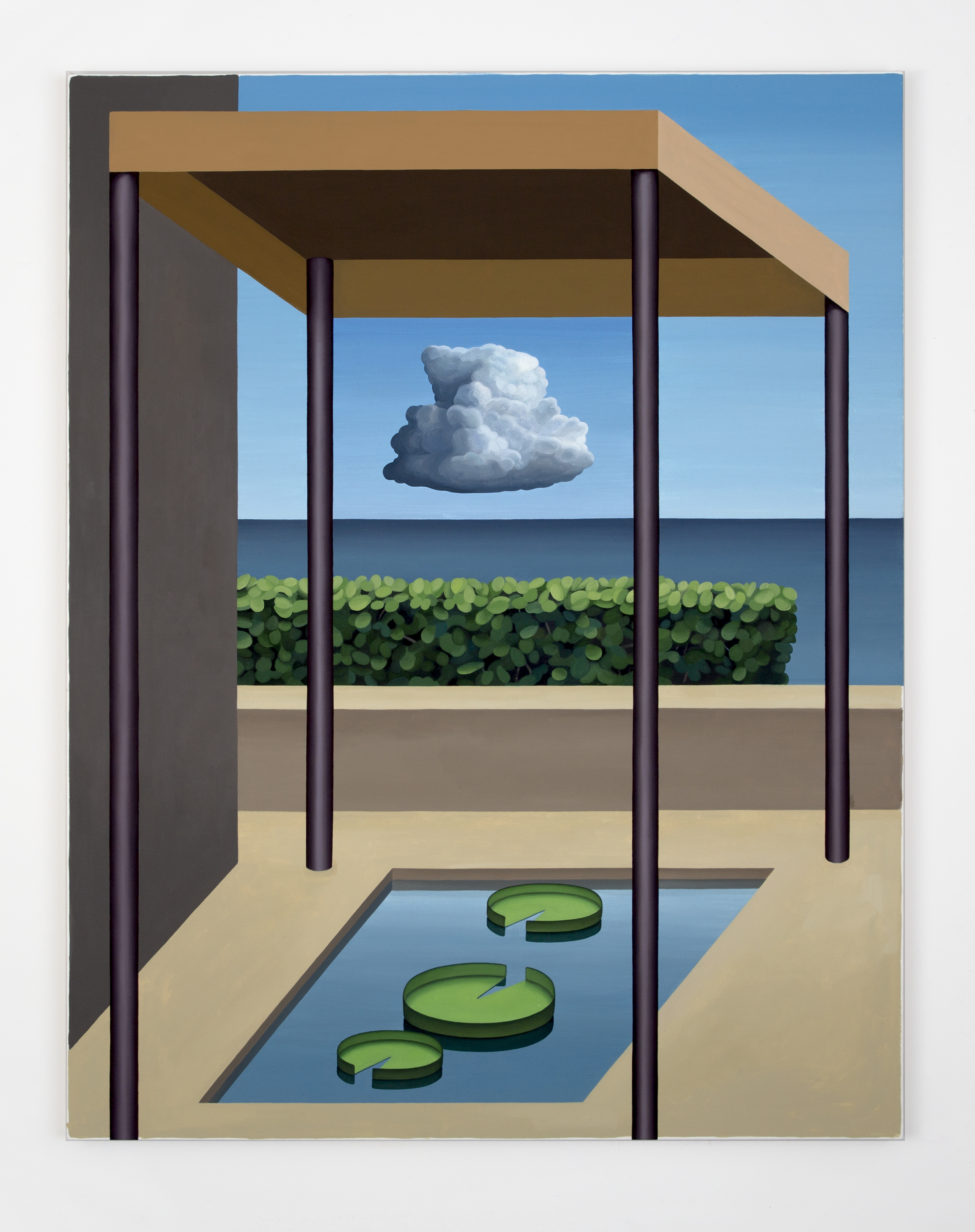 I’m not sure about personally – it’s hard to know what opportunities you get or don’t get because of who you are, but I’ve witnessed it a ton in museums and galleries.  Many gallery artist rosters are still predominantly male and white, and the art market at the highest levels still favors dudes, so, yes.

I definitely think the conversation for female identifying artists has been changing for the better.  When I moved to New York 8 years ago it was like every group show, museum retrospective list, and gallery roster was 90% male.  We’ve still got a lot of issues with representation, but I can definitely see some of these spaces, communities, and institutions slowly awakening from that insanity. 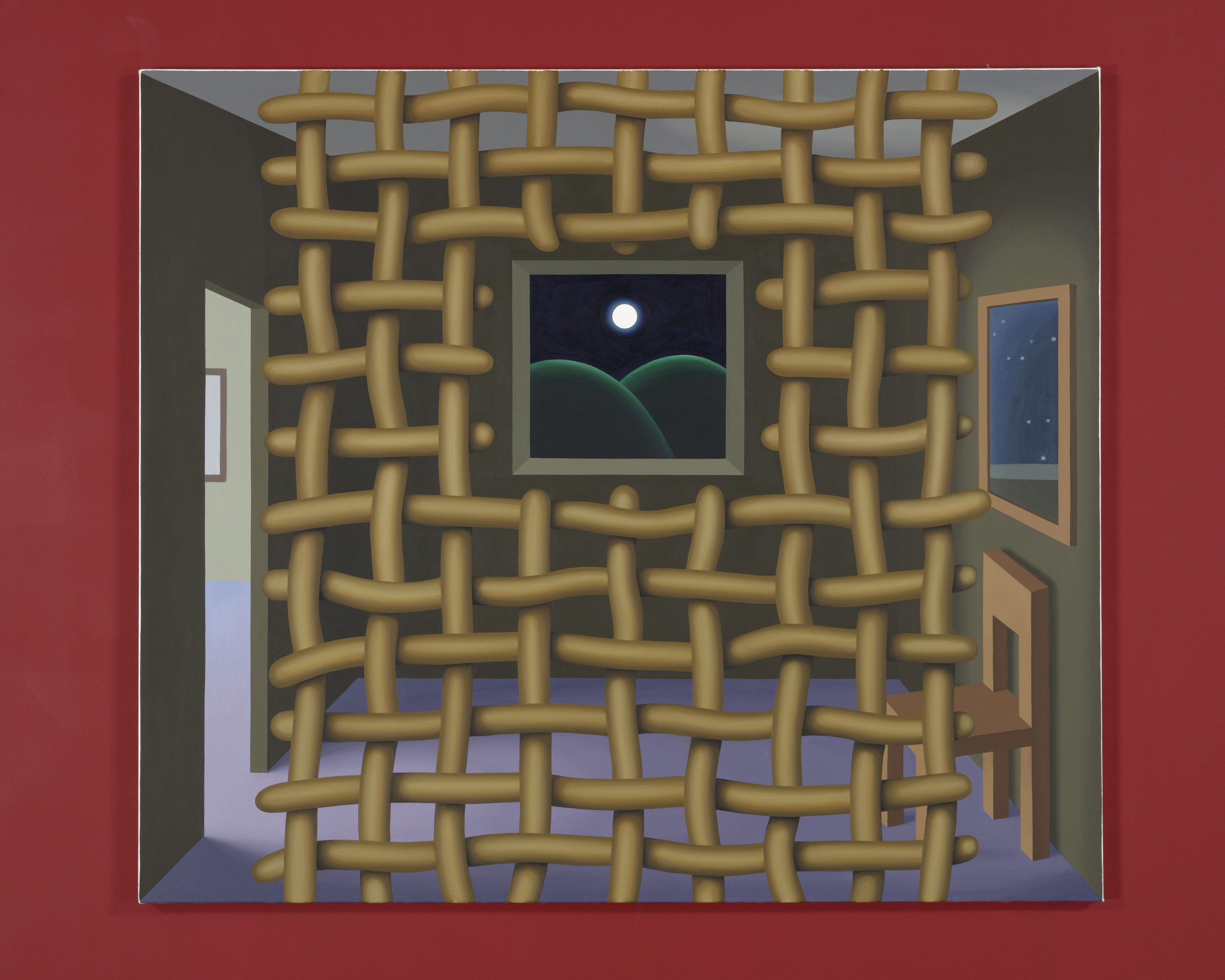 This is just one thing, but it’s not the one thing I would change.  I would like to see more women included in art history and studio class curricula.  I haven’t been in undergrad for a while, but most of my classes only taught feminism and the one or two women famously associated with other movements. In addition to those, I’d like to see a more diverse range of female art and creative cultural output included in classroom discussions — not just those who neatly fit within distinct art movements and linear cannons.

What art movements do you draw inspiration from?

Certainly Feminism and its evolving dialogue. People bring up the metaphysical and surreal movements in relation to my work and I get that.  I’ve also fallen for the works of Octavia Butler and Ursula K. LeGuin this past year so science fiction by female writers has me excited. 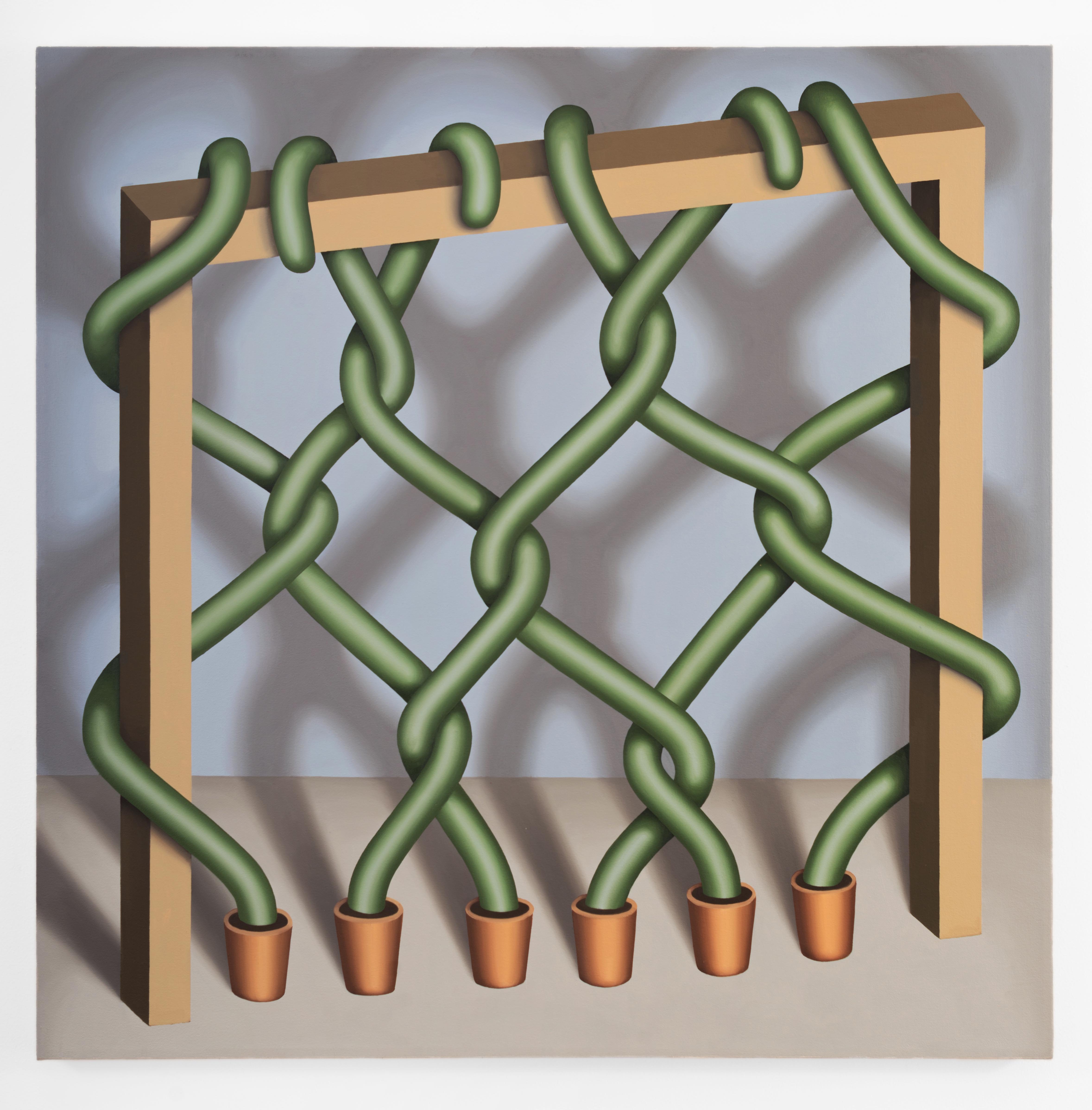 A few tropes appear in your work – woven elements, a room with a light on – do these symbols have deeper meanings?

Often, yes, but I also welcome their ambiguity.  I like to create spaces where more than just one creative tradition is represented – be that weaving, architecture, the modernist grid, braided hair, interior design, housekeeping, potted plants and gardening.  The woven grid is an example of one symbol I’ve become attached to as it embodies at least a couple of these different interests, sensibilities, and aesthetic traditions.

The dark room with the light on in the next room represents to me a couple feelings – it can feel domestic and cozy, like when you’re a kid in bed and your parents are still awake watching TV or talking quietly in the next room.  But dark rooms for me also evoke mystery, moodiness, and lonesome feelings. 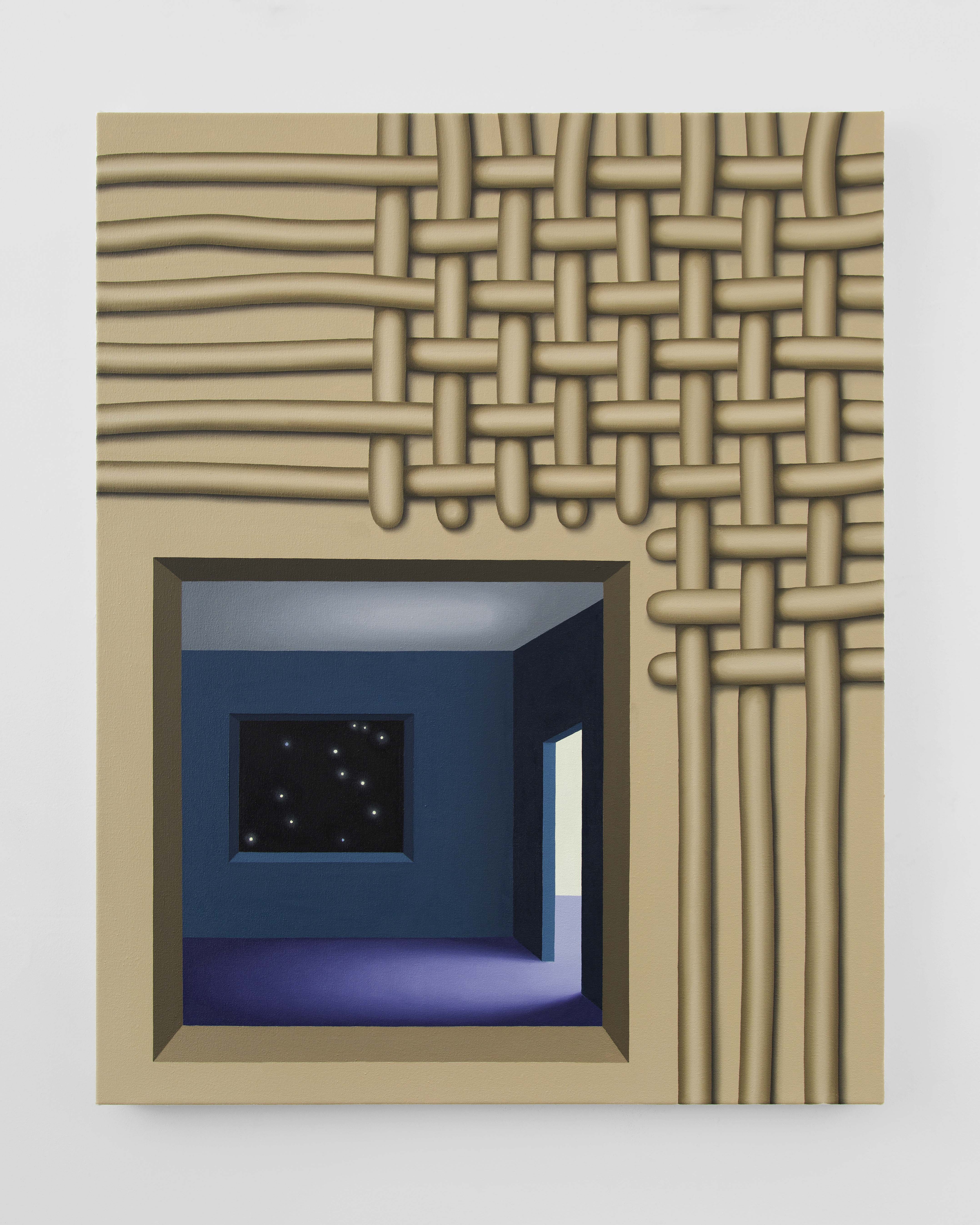 You work in a very hard-edge / distinct lines sort of way – is this something you ever try to work against?

Yes, very hard edge. I’ve always been a geometric drawer, even as a child. I do sometimes find ways to paint more loosely within compositions, but I’ve found color, light, composition, and symbolism equally as valuable elements through which to complicate things.

How do you continually challenge yourself in your practice?

There’s no one method I follow.  Each painting and each day has its own challenges.  I do try to fluctuate between paring down and then expanding out every few paintings, though.  To me this feels like improv’s method of “yes, and…” or like continually answering the question “okay, what’s important here?” and then complicating that answer again. 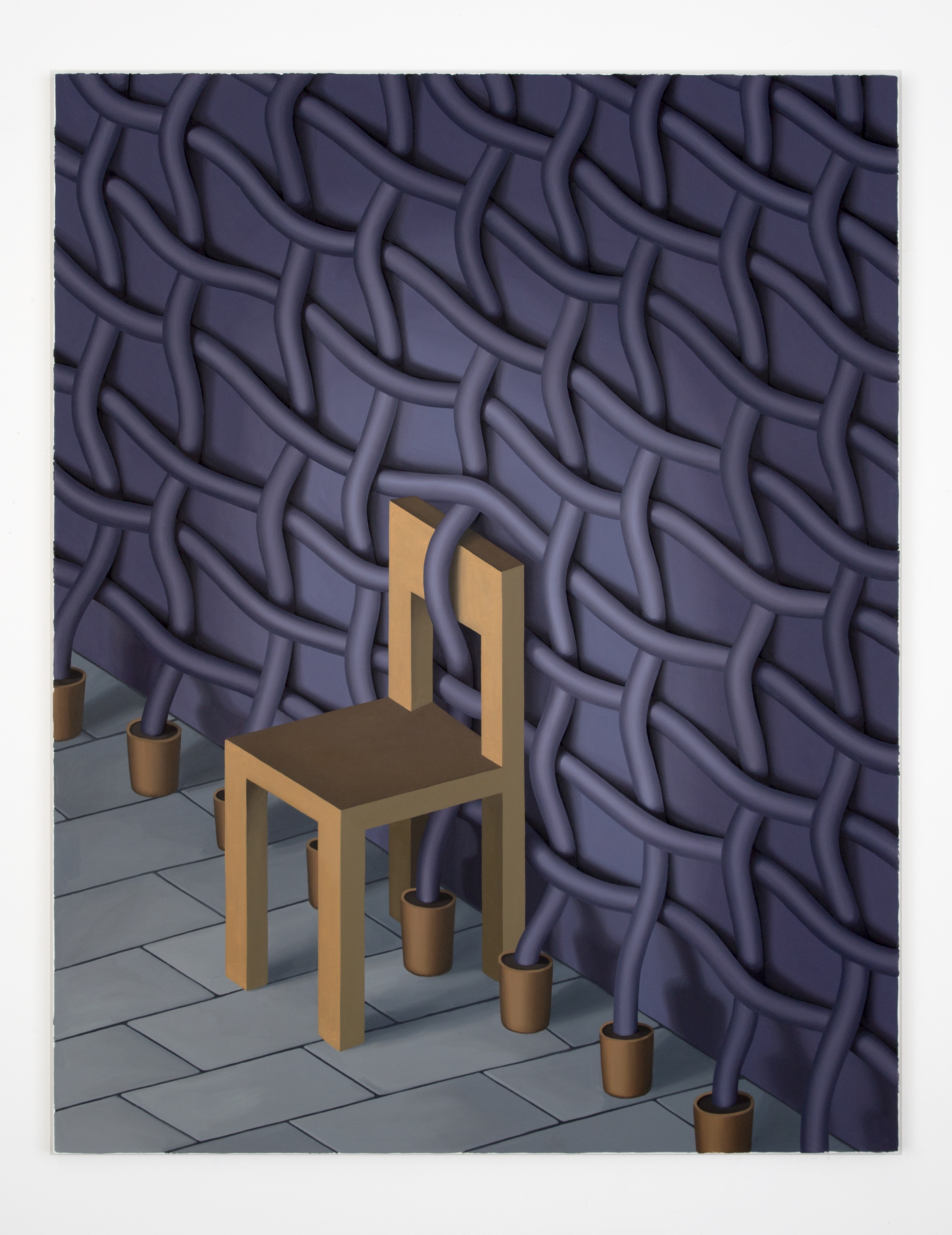 I have a solo at Institute 193 in the spring.  It’s a non-profit space in Lexington, KY that does one-off solo shows with emerging and established artists with connections to the South (my dad lives there and his family is about 8 generations deep in Kentucky). The director Paul Brown is great, so I’m looking forward to working with him more.

I’m also going to be in a group show at L’Inconnue in Montreal this winter. Leila Greiche (the director) has a great intuition for curation, so I’m excited to have my work in her space. 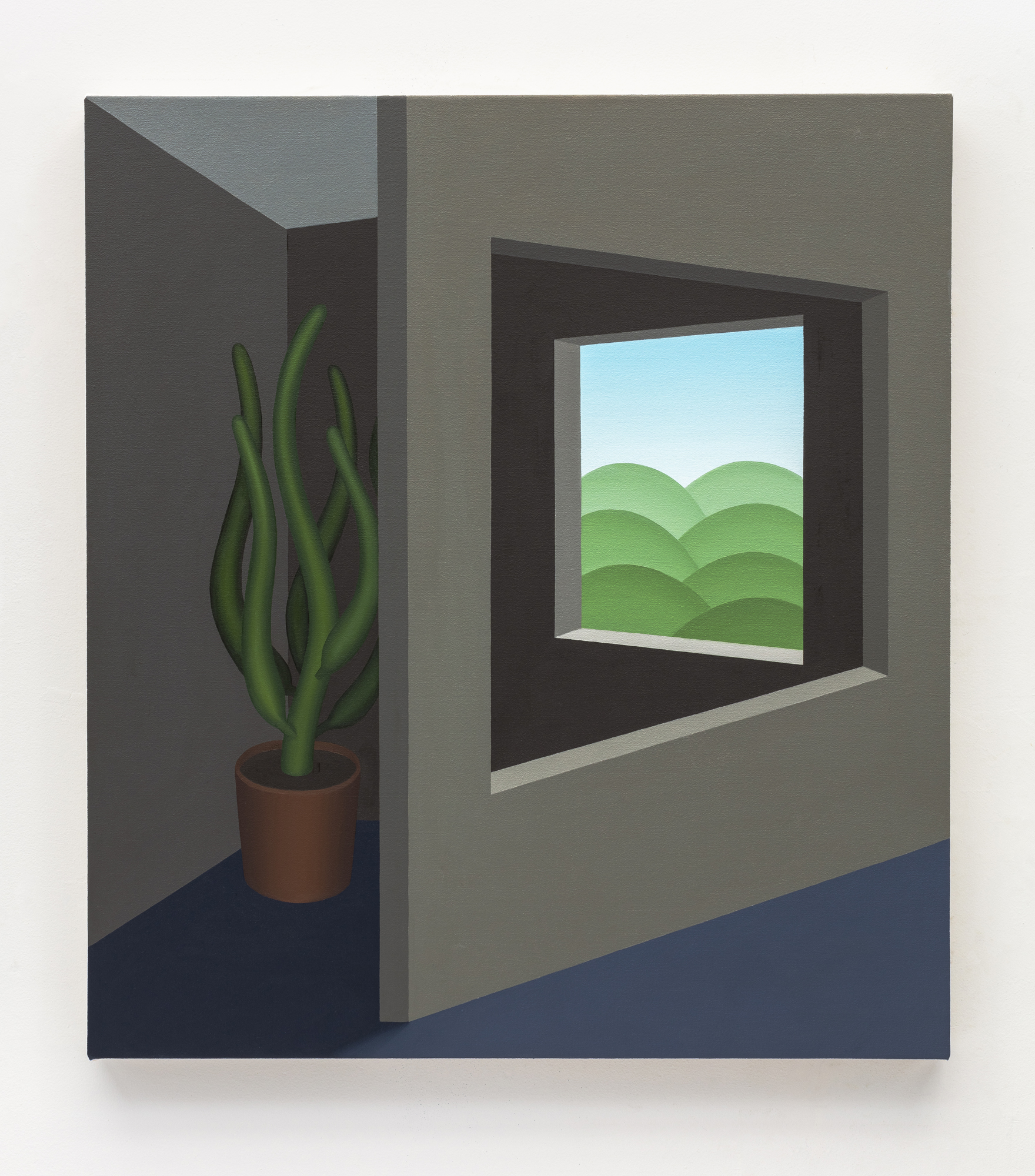