What began as an unassuming joke with herself has become a vehicle for exploring and reclaiming a female perspective in art history. I’m referring to Emily Mae Smith’s ubiquitous broom figure, which rematerializes itself in various iterations in her paintings, ranging from an adaption of Ingres’ neoclassical masterpiece, Oedipus and the Sphinx to surrealist and pop landscapes. By supplanting the feminized Fantasia broom, which she views as an avatar of female representation, into these paintings that are rich with contextual references, Smith takes the viewer on a tantalizing journey through art history, reimagining it at every turn. 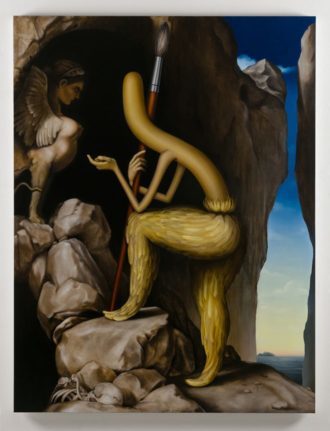 Smith has begun to really hit her stride in the last few years with solo shows in New York, Brussels and Glasgow, but it wasn’t an easy ride. Having graduated from the Columbia MFA program in 2006, the recession hit shortly after, causing major upheaval in the art world. Needless to say, Smith like many young artists went through a tough time. After losing her studio, she began painting at home and was forced to work on a smaller scale than she was used to, something she now sees as a blessing in disguise as it taught her how to refine her painting, distilling what was necessary to convey her ideas. The by-product of this lesson is Smith’s signature style that straddles the line between pop and surrealism, humor and truth. 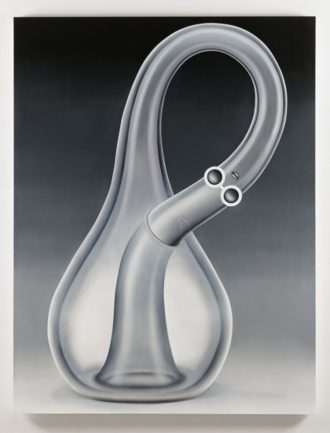 When did you first realize you wanted to be an artist and can you share a particular story?

I grew up in rural central Texas where there was not much art and definitely no “art world”. Popular culture was even a little out of reach. I have drawn and made things with my hands for my whole life. My parents encouraged that. I always thought I would be an artist, though my understanding of what that means has certainly evolved over the years.
Looking back I can see a thread throughout my work. There are a few major events that had a lot of effect. During the late 2000s recession I was really struggling – I lost my studio and then had to paint at home. I couldn’t paint in the way I was accustomed. I had to work small and use different materials. It made me focus and concentrate the content. I was out of school for several years and no one was looking at my work, so I felt free to paint my inner life and do weird things. I had to be honest with myself about what I was trying to say. Painting is hard, it takes a lot of practice. When I started feeling facile, I had to learn what NOT to put into the painting. That was a big deal, to practice restraint.

What inspires your work most?

For the past couple years I have been extremely interested in Symbolist painting. Symbolism is from a complex time; mid 19th century to the first World War. The anxieties people were grappling with in their changing world are sublimated in these paintings. There is so much bizarre fantasy in them and a lot of misogyny too. Freudian thought was not yet popularized- so they feel unanalyzed and really weird. Modernism seems really embarrassed about its Symbolist roots- that interests me too. 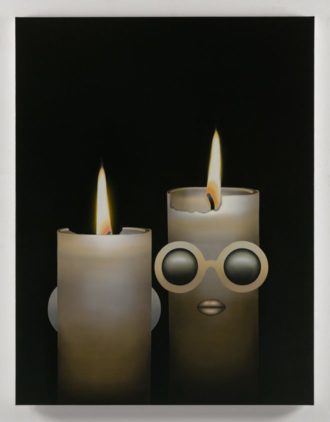 Can you explain your painting process from start to finish?

My paintings start as mental images, which I record as very quick drawings. Sometimes I write text that elicits a mental image. This initial drawing is a guide from which everything else flows. From there I create a plan to execute the painting, making decisions such as scale. I partially think of them as engineering challenges, like machines. I paint in layers. I work on multiple pieces at once, so that while I wait for one layer to dry, I can start something else. I feel very strongly about color choices: how they interact, their temperature, and how they feel. My paintings are usually oil on linen. That’s the medium I have been working in for almost 20 years now. Though I have a goal in mind for the painting (thinking back to that initial idea) an unexpected turn can arise. If it feels conceptually appropriate, I’ll go with it- the process stays fluid. 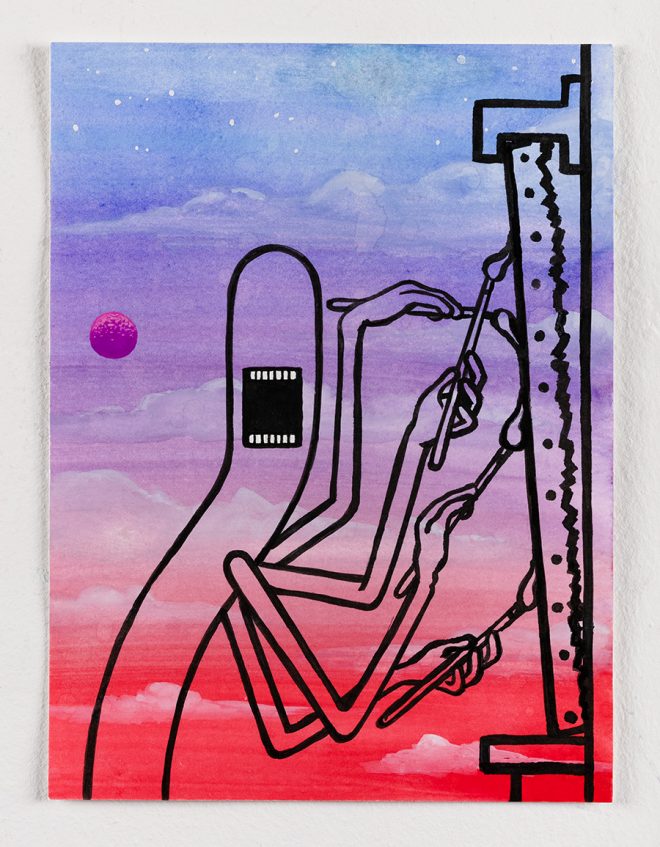 What are the first 3 words that come to mind when asked to describe your work?

I just can’t choose three! Language is hard for me. Language for art comes from histories that have repressed, to a certain extent, voices like mine. So I wonder if the words just don’t work. 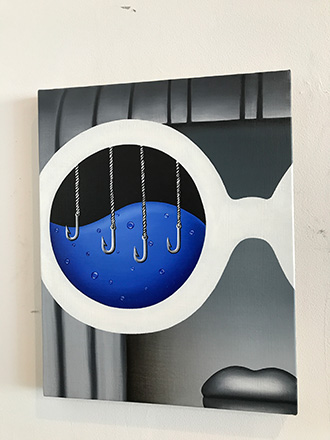 And when asked to describe yourself?

I just don’t know. I’m too inside myself right now to externalize.

What was the most recent show you saw and what did you think of it?

I saw David Hockney at the Met, with a bunch of friends. Some of his paintings I really like, and some I don’t like at all. So that’s interesting. I do like how he seems to keep experimenting. 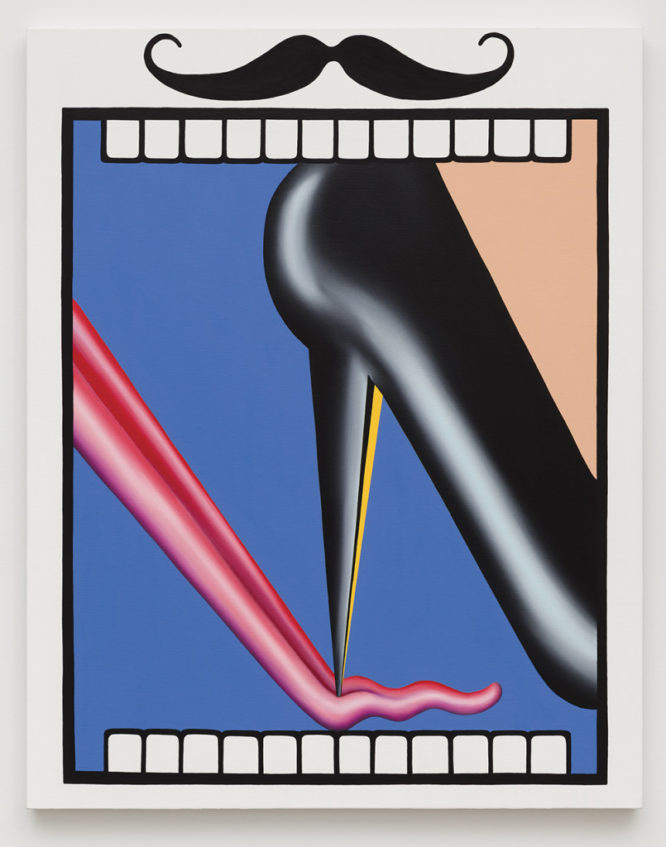 If you could have dinner with anyone in the world, dead or alive, who would it be and why?

All of my grandparents passed away before I grew into an adult. I would like to have dinner with my grandmothers. I never knew them as women. I would like to know more about their lives, in their own words. I wish they could see what I am up to.

Fun fact about yourself?

I can play the piano. 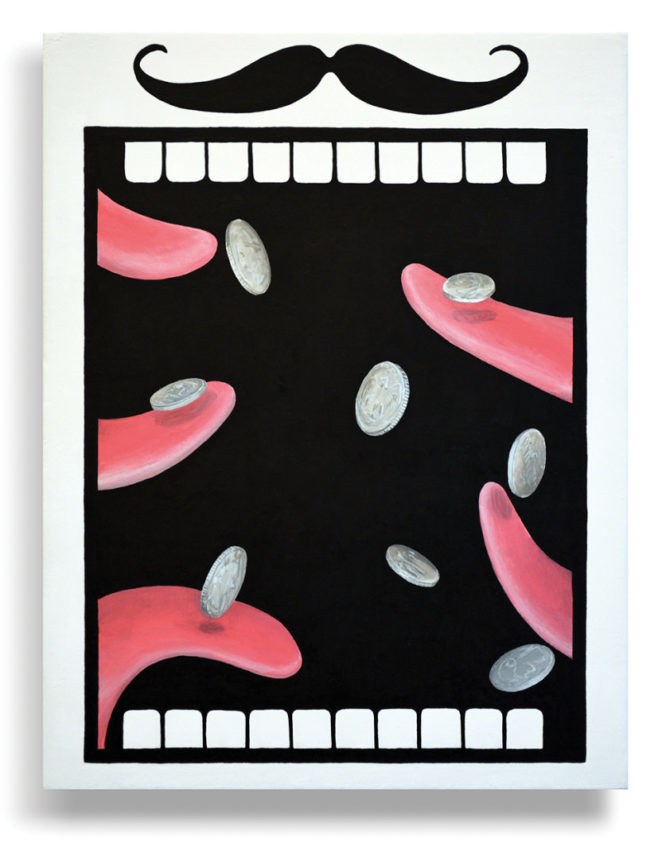 I have a solo exhibition at Contemporary Fine Arts in Berlin, scheduled for June 2018. My first institutional solo show is scheduled for November 2018 at Le Consortium in Dijon.