Emma Stern uses a unique animation technique in her work to diffuse the potential stigma behind hypersexualized avatars so often seen in video games, and often bleeding into 3D pornography. Each of her characters is, in part, a self-portrait, and she explores this idea of a muse deeply. She graduated in 2014 from the Pratt Institute’s School of Painting, at first considering a career in medical illustration before quickly realizing her affinity for oil paint. Her idea of incorporating technology into her work not only in the way it looks, but the way it gets made, is novel, but absolutely fitting for the times. As a science fiction fan, she doesn’t shy away from collaborating with machines, and in fact, revels in the exciting world it has opened for art. We can only imagine what future technological advancements might stir in her, but for now, read on to see exactly how her practice operates.

Tell us a little bit about yourself. How did you get into your practice?

I was definitely one of those kids who was always going to be an artist. It was pretty obvious growing up, and while my parents are not artistic, I was lucky that they were pretty encouraging. I was always drawing and painting when I was young but it wasn’t really until high school that I got more serious, like, “Oh, this is maybe something I would consider doing as a career.” So, I started spending a lot of my free time painting without any real direction. I went to a small town public high school so I never got a formal arts education before college, but I was pretty dedicated and in a way I think being largely self-taught informed my personal style. I went to art school and actually applied as an illustration major. My dad is a biologist, so I really wanted to do medical illustration, but then I took a painting elective and fell in love with it and realized it was without a doubt what I wanted to do.

Where do you find inspiration?

There’s a whole tradition of painting naked ladies, but as a figurative female painter in the 21st century, I struggled when I first graduated to figure out how the female nude fit into contemporary painting. One day a friend of mine asked, “Hey, have you maybe looked at this…?” and he started showing me this character design software, which is the same program I still use today. It’s mostly for game developers and people who make 3D porn, but I had this eureka moment when I realized 3D models could replace the live models I had been working from. The software is free so there is a huge underground community surrounding it, a lot of people posting their work, which I take a lot of inspiration from. 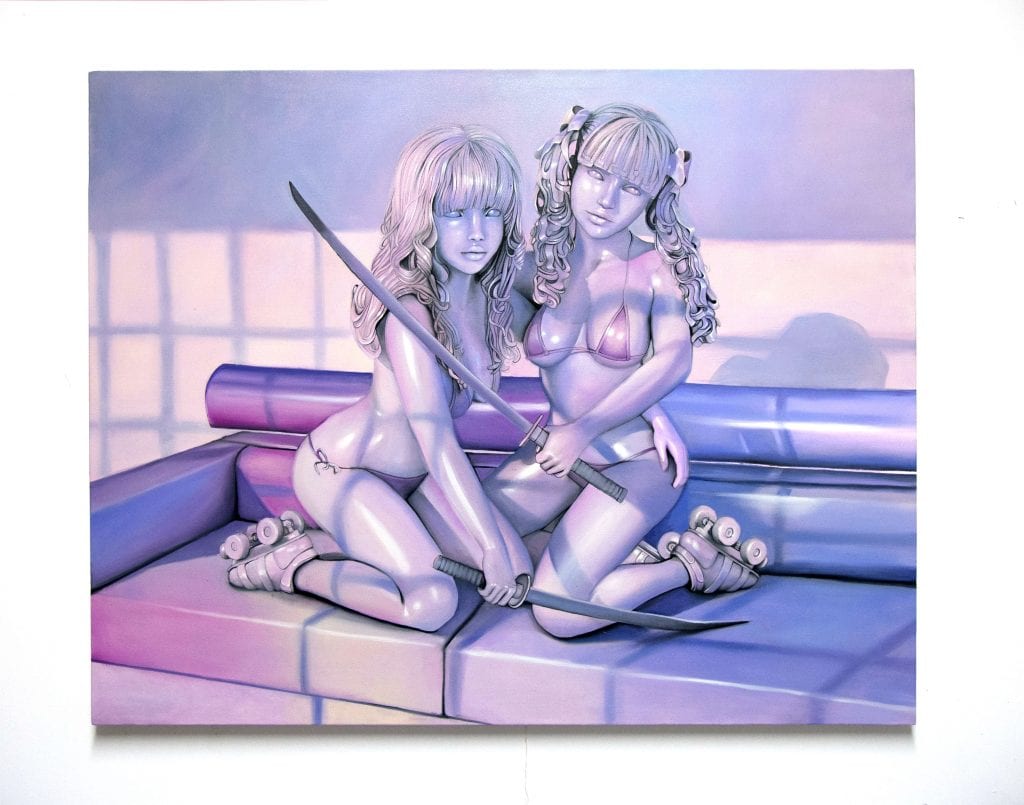 Some of your work is digital and some is physical. How do you decide what is the best medium for a project you are working on?

I have always felt awkward calling myself a digital artist or saying I make digital art because someone who was truly skilled in 3d rendering would probably laugh at me. Essentially, I just taught myself what I needed to know in order to make the paintings in my head. Really, though, I’m a painter. I have always thought of the digital work as a sketch up until very recently, because I used to sketch everything out and now I’m sketching it out digitally. I only started to think very recently that these digital sketches can exist on their own on some level, so I’m exploring things like VR and virtual sculpture. But I think in painting there’s something that elevates the work because of the canon and because of history behind that medium. When you paint something, you’re immortalizing. It becomes indicative of this intense, long-form focus on a subject, so I think painting portraits of these avatars, which don’t usually get to be immortalized like that, places this very contemporary idea into this very old format. 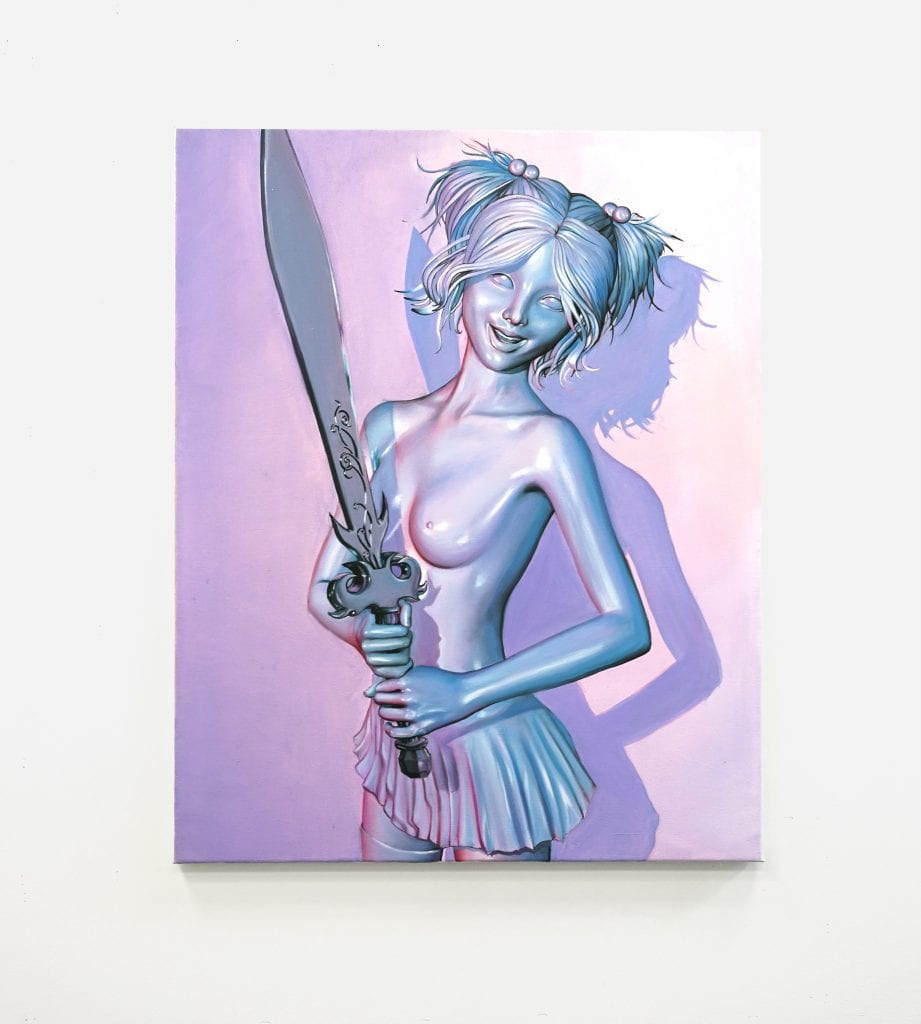 Does your work reference any art historical movements?

Definitely. I’m a huge art history nerd. What made me want to become an artist since I was a little kid has been Renaissance painting. I was thinking recently about how my style of painting is very blended and smooth, and I think it’s because I’m working from digital source material. There’s this desire to erase my hand and not have any brush work at all, which is what Italian Masters did. For them, they were trying to mirror the perfection of god’s creation, and now I’m trying to mirror the perfection of computer creation. So I definitely look at a lot of old paintings because I just think its so damn good! I look at Dada and Surrealism as well because they also acknowledged this idea of a muse. 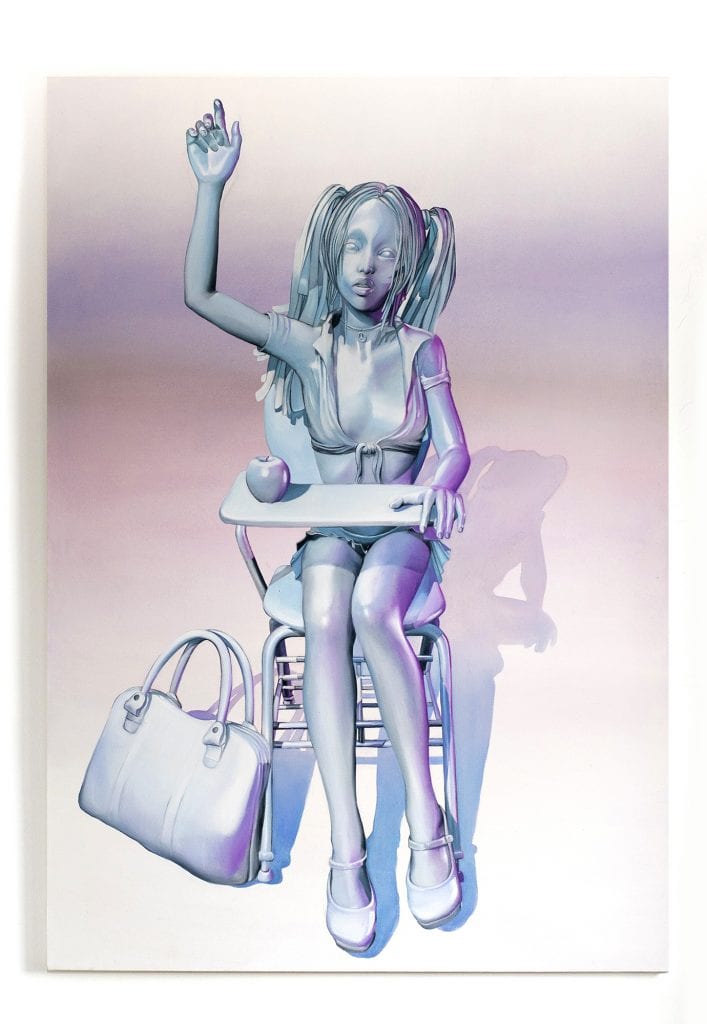 Do you yourself have a muse?

All of these girls in my works are my muse. All the paintings are named after the girls in them. Anything any artist makes is a self-portrait on some level, and I think here it’s more pronounced because these are my digital alter egos.

You use light in a really interesting way. How do you get the technique of your highlighting right?

The software I use to build the scenes I paint from allows me to mock-up lighting and play with material in really interesting ways, simulating the way light interacts with the physical world. The lighting is something I began playing around with a lot more recently as a way to describe texture. I can make things super buffed out and shiny, or I can make it more metallic or matte.

Did your friend who recommended this program have a hand in helping you figure out how to do anything? Did you come from any history of knowing how to work with 3d modeling or animation?

I got a basic rundown from the friend who showed it to me, yes, but it’s just been Youtube tutorials and message boards and forums since then. I definitely have no background in software or 3D, which is why I don’t call myself a ‘3D artist’. I’m a painter who’s interested in 3D aesthetics. Because I learned to use the tools through message boards and YouTube channels, I’ve learned a lot about the culture and communities behind them, which in turn has led me down so many weird rabbit holes and winds up inspiring the content of the work.

You mentioned someone recently asked if what you are doing is feminist work. What would your answer be?

I don’t understand why men get to paint hot naked ladies for 500 years and then as soon as women do it, the issue of feminism gets raised. I’m a huge fan of Lisa Yuskavage, and I think she deals with this a lot. She gets a lot of heat because she literally calls her subjects “the bimbos” or “the babies,” but I think she handles it really gracefully so I’ve tried to learn from her. In the past I have had to answer silly questions that could basically be reduced to, “Why do they need to be so hot?”, and I’m like, “Because I say so,” which I think is actually pretty damn feminist of me.

Would you say your pieces are asking any bigger questions, such as exploring topics like feminism, virtual reality or our personas online versus in real life?

I am definitely interested in those topics and maybe that comes through in my work. I’m really interested in science fiction and futurism and so that’s where my head is at when I make these paintings. If people pick up on that, that’s great, and if they don’t pick up on that and they see just a painting of a hot lady, that’s also fine. I’m a big believer that your intentions aren’t really important once you put something out in the world. That’s what is interesting about painting these avatars because they’re these empty vessels, and you can look into their dead eyes and see yourself reflected back. I’m really okay with people getting whatever it is they get from my work, having their own experience with it whatever that may be.

Would you call yourself a perfectionist?

Only in painting. Basically in everything else in my life, I tend to think “good enough is good enough.” In painting, that’s where I channel all my neurotic energy.

What are your thoughts on social media for emerging artists?

Social media has played a huge role for me personally as an artist. I think Instagram in particular makes it easy to connect to a global community. Through Instagram I’ve shown all over the world in really random places. I’ve been included in shows in places I’ve never even been to  just through people I met on the internet. I wound up doing a residency in London because of internet friends too. It’s awesome and I would like to think there’s a broader, more international community that is replacing the New York-centric model.

It’s still in the conceptual phase right now, but sculpture is something I’m really excited to be exploring this year.

I adore the work of my friend Anne Vieux, also based in Brooklyn!