Gabriel Mills Displays an Intrinsic Connection to his Ancestry

When he was introduced to Salvador Dali’s, Gabriel Mills immediately felt connected to its Surrealist nature. Adopting a Surrealist essence, Mills paintings are inspired by his own ancestors and the spirituality present in African and Indigenous art. Not interested in creating works with a definitive meaning behind them, Mills engages with history and but remains open to what could be. Mills is currently working toward an MFA at Yale School of Art and is based in New Haven, CT. 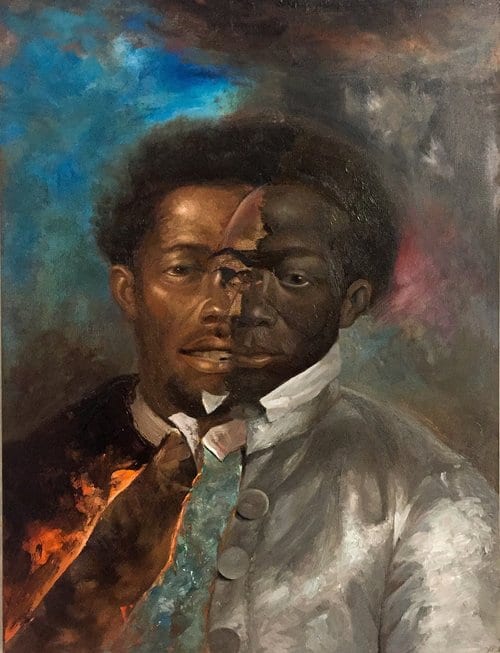 Tell us a little bit about yourself. Where are you from and when did art first become a significant part of your life?

I was born and raised in New Rochelle, NY. I been living in Harlem for a few years, and now I am in New Haven,CT. Hundreds of years ago, my family’s beginnings in this country were in the south, you can say we’re “True American’s” as complex as that is to truly identify with. African American is usually the term given.

I believe the various mediums that art comes in, allows it to be constantly significant. As a child I would always draw and nurture my imagination one way or another. I fell in love with Spider-Man, I’d read all the comics and drew Spider-Man all of the time. Growing up I was what they call a “Sneaker Head” So then I’d design and draw Jordans. I loved cars, I then would not stop drawing and designing different cars. Always was into sports, I drew all of my favorite athletes. All of this was happening around ages 8-16, and I had not yet embraced being “an artist” or thought about it outside of being a hobby.

The specific frame of time where I embraced and took a dive into this pursuit, was in my senior year in high school. It was when I took my first formal art class, I made this painting, my teacher said to me something among the lines like “You must know Dali”, I said “No, I’ve never heard of him” I had no knowledge of artists outside of maybe three or four. She introduced me to Dali and surrealism, I immediately identified with it.

I had felt that a large part of the curious inquiries I’ve had at that point, had already been explored and a language had been developed for it that I was unaware of. From that point on I’ve studied art intensely, learned as much as I can. I felt behind for learning about art at a relatively older age, and felt I had to catch up to my peers who in my mind knew everything already and had been studying since they were 4 years old. Which was a misjudgment. I found that art making is a journey worth exploring, and it’s there for me to take what I will with it, and ultimately contribute to its history. 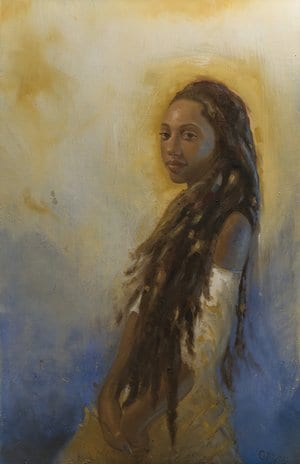 Is there an overlying theme or message that connects your work?

It’s a really fine line of being overt, and letting things just be. I don’t want my paintings to function in an authoritarian manner. However, consistent themes have been those regarding divinity and the iconography attached to it, questioning accepted paradigms, really engaging with history and wanting to remain open about what could be. Specifically, my history, my ancestors. History, who is lucky in the game of preservation? That’s what it is. Who is telling the story? What did they find relevant enough to document? I’m often in dialogue with an intangible idea or thought, that I am trying to give birth to in some way.

Reflection is critical in my investigation, memory as well, it provides equipment for my journey. I aim to better understand my story, to feel liberated. This is not only my story but is also for the rest of the world to grasp, as I am a part of a collective of people. “The death of the motherland is not in what we leave behind but is in everything that we forget”. This quote drives my work and speaks to the experience of displacement, for what that means is also a complexity. I will always be inextricably engaged in my own identity, and won’t allow myself to be stagnate in that, and satisfy a pre-determined box under someone else’s accord.

There is a kindred connection to African sculptures, ancestral figures, present day iconography, and the humans I am painting. Visual languages can potentially shift my own thoughts of what I have seen as ideal, or divine, and expand what that can possibly be. All things held as divine, are based in one’s idea of divinity, leaving it to be open to any aesthetic really. I never felt hierarchies in approaches to painting. The act of painting activates me further into my investigation. The key thing there is to work in a manner that allows the artist to be free, not be so fixated into forcing something that is not there and ultimately locking yourself up, we want to be free.

There is so much, I’ll condense. I’m most inspired by my ancestors, my elders. For without their strong hearts, courage, and sheer will to give their all, I would not exist. For me to be mediocre, and not give as much as I can, is antithetic to my existence. Much African art, Indigenous art, was created with spiritual intention and function, there was not so much of a barrier between art and life. So, with that, I have to be in alignment with the work I’m creating and live that each moment. Aside from that, I draw inspiration from my questions about the world. Being observant, and not just a casual viewer to my surroundings. I’ll often write out hundreds of questions, not being so focused on trying to answer them, but revisiting the ones that stand out to me. The works I begin come about after long reflections and writings I do; I carry a sense of urgency when I am painting from spending so much time thinking about it from all angles. 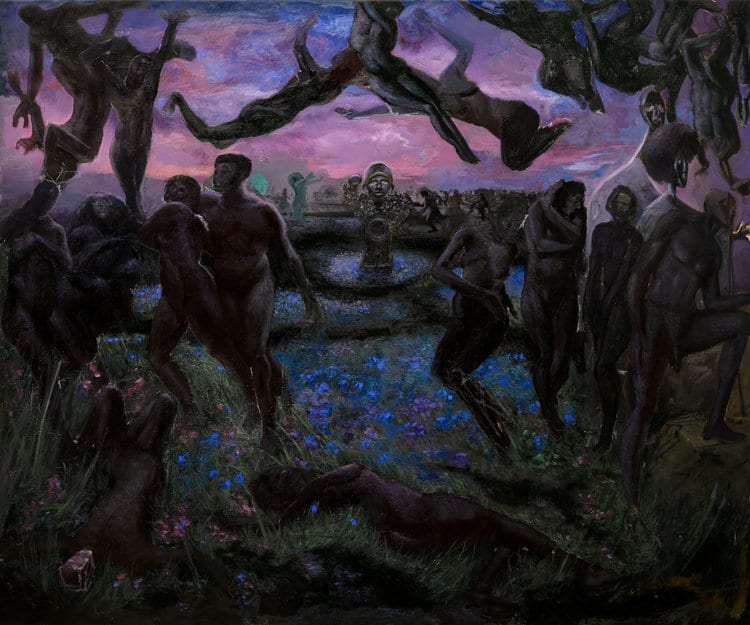 What movements in art history most inspire you?

I have an admiration for many artistic movements, I see value, bravery, and genius in moments in many periods. Neo-Expressionism, Surrealism, Renaissance (Harlem), Italian Renaissance, Romanticism, Cubism, Abstract Expressionism, Conceptualism, and Photorealism are heavy on my mind most times. These movements can feel like somewhat of a religion. You have the “leaders” of it, you have a following of it, also will have imposters within it who are exploitative of its success, and then 50 years after the originators are dead, you still have people who believe in it so much that they are willing to disregard their own opportunity to create something entirely new, they create derivations of that movement. Which I find to be very beautiful actually, and not as mundane as it sounds. Sometimes there is unfinished business within a specific moment in history that the artist may be compelled to further understand for themselves.

In any event, Hip-Hop feels most authentic as an artistic movement in my world. There is less distinction between art and life, there is constant innovation, and it has been the most influential form of artistic expression in recent years from my point of view. What’s most inspiring however is “Cave Paintings” Indigenous art, “Outsider art”, pre-Columbian art, all African art, none of these were artificial movements, they just were, as is, its own thing.

The art that is most inspiring to me is when it is not so heavily coded and reference heavy, which is incredibly difficult to accomplish with so much information but it also feels somewhat irresponsible to disregard everything, and leave earth essentially, but sometimes that feels like the best way to move forward, leaving earth, haha.

In all seriousness, I am most excited about the present moment. Firstly, this is the only time I’ve existed and had an opportunity to have a say within the arts, more importantly, there are so many marginalized people who have found ways to break through and gain visibility and support. It’s an interesting time, we have never had so much access to information, and there is so much to tackle. It feels that the lid is blown off for what could happen next. 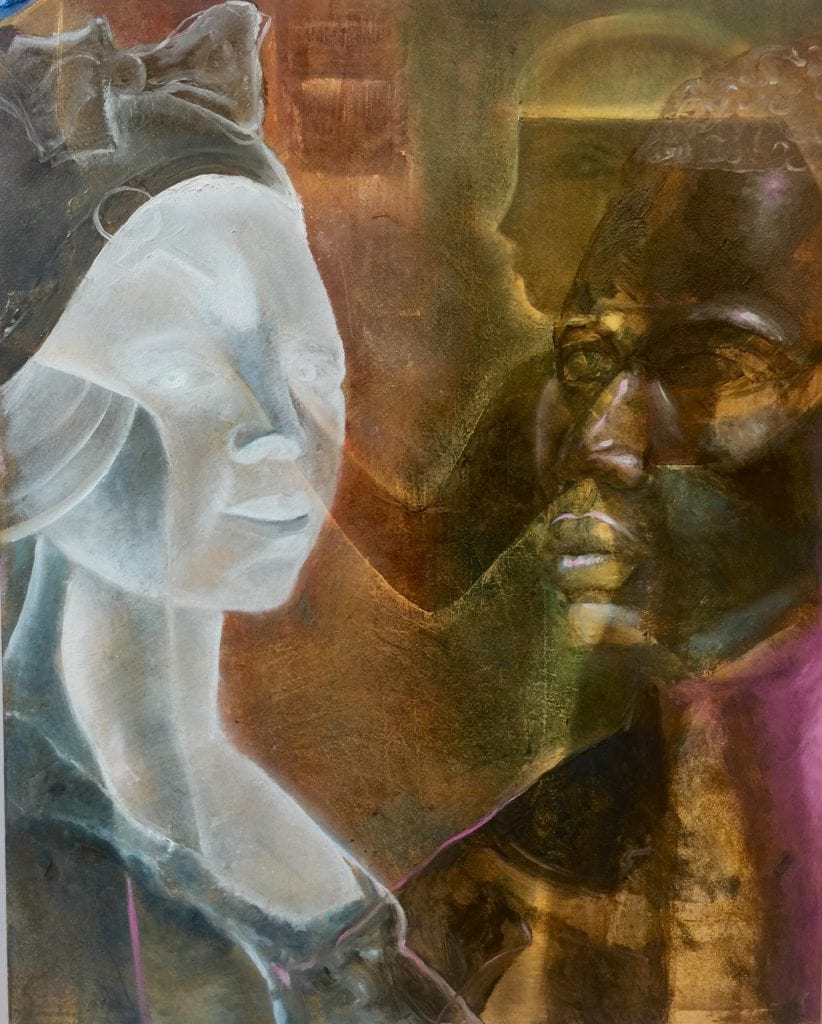 What other artists do you most admire? 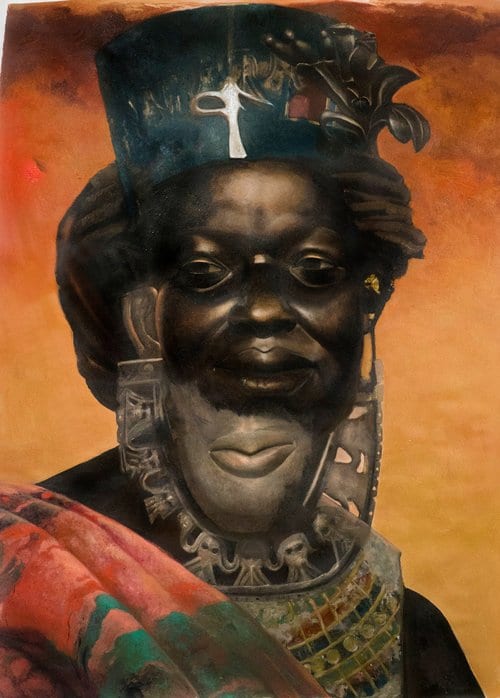 Expanding myself as much as I can, being receptive to the lessons around me. Being grateful to exist, every moment I am here is further affirmation that I am supposed to be here, I have to give my best effort.

My mentor has taught me, not only are we aiming to be masters of the arts, we are really attempting to master the art of living. Each day I try to be more in alignment with that and live with that sense of responsibility.

The world is burning up! It has been for a long time, now there’s two options essentially, to say, “Fuck it, we gon die anyway, turn up!” Or, “Death is inevitable, when I go it will be with both feet on the ground standing tall” Trying to do my part in this world and contribute the best way I can, coming to an understanding of what my role is, what the role of art is, we have to put it in question and prioritize, understand. 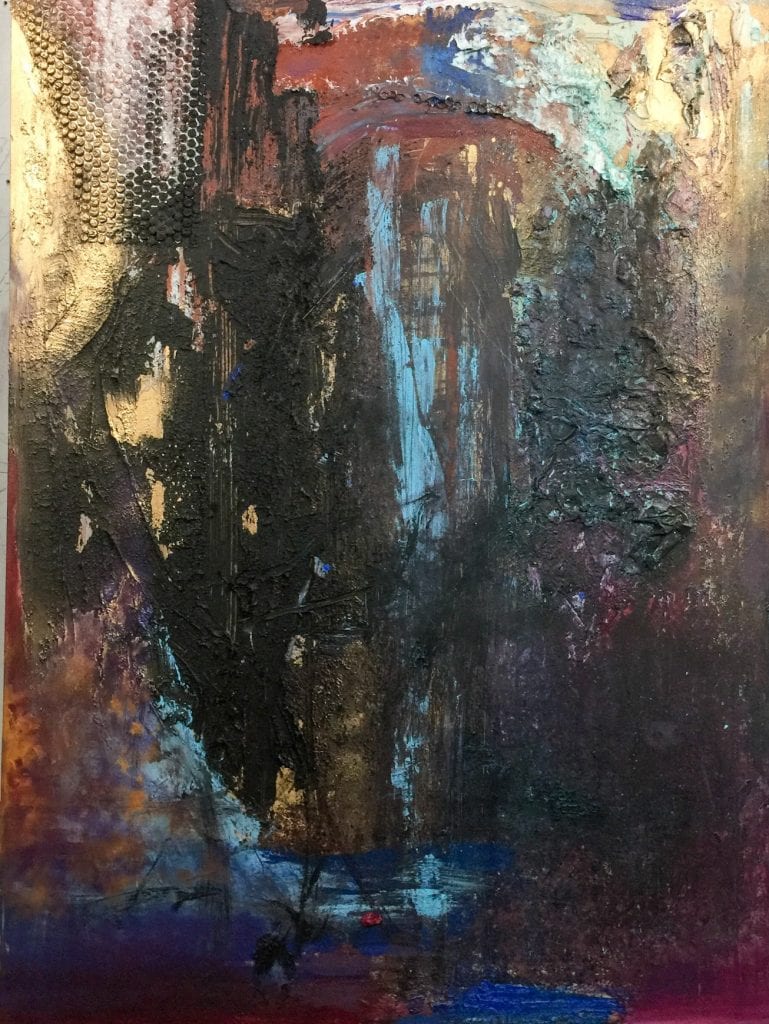 Tajh Rust Puts His Attention on the Private Sphere