Hein Koh creates larger-than-life spandex sculptures that call to mind a whimsical childhood experience. Depictions of oversized flowers with eyes, a burger with a tongue sticking out, and a one-eyed feminine ice cream cone are just some of her latest creations. Koh strives to capture a sense of innocence with a sense of wit in her work. She lives and works in New York City. 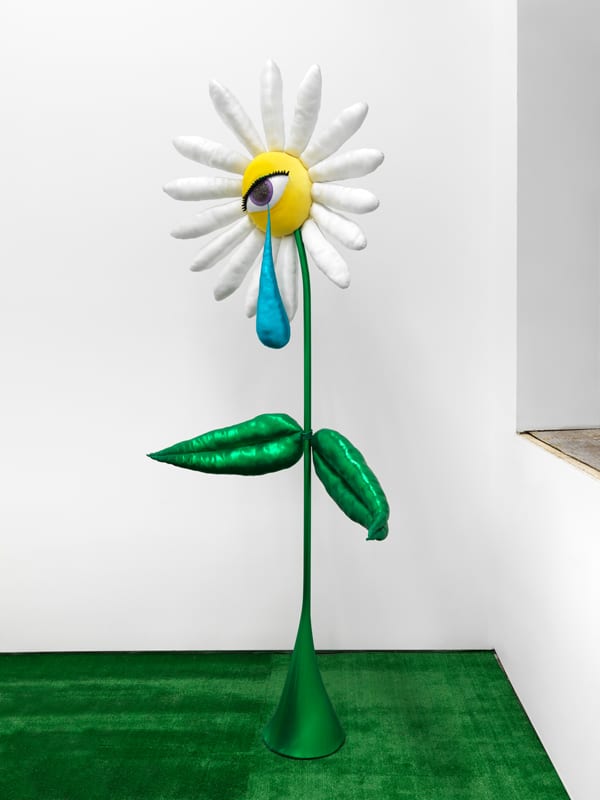 I love it. I feel that in recent years, I’ve connected with a lot of strong women artists who are gaining the recognition they deserve. A lot of us are not so young – over 35 or even 40 – but we’ve been working at it for years and our work has gotten better, evolved, and people are noticing. There is something to be said for sustenance and the wisdom gained from experience. My community is very supportive of one another – we build each other up and try to elevate one another.

When I was in undergrad, I always loved Frida Kahlo because I was painting self-portraits at the time and I responded to the deep emotions in her work. So much pain and sadness. I was also influenced by Eva Hesse and Louise Bourgeois, whose work I also felt was very emotional and psychological, and I loved their command of materials. Yayoi Kusama is also a big influence on me. She is just so immersed in her art, you don’t know even know where the boundary is between her self and her art. As for living artists, some of the female artists I’ve connected with recently are Julie Tuyet Curtiss, Loie Hollowell, Genesis Belanger, Carolyn Salas, and Emily Mae Smith. They are part of a group of artists focusing on female surrealism and/or the body, which are the things I am interested in. I’m also part of a women’s crit group/feminist book club, which includes members Jessica Stoller and Robin F. Williams, founded by Jessica Stoller. I find them as well as other members of my group inspiring, and when we get together we have amazing, elevating and supportive conversations and critiques.

When I graduated from Yale in 2004, I definitely felt like the men in my class were getting more attention than the women, but I do think things have changed a lot since then. I think sexism is going to be a lingering problem in any field, but I do feel that women have definitely gained more visibility and that gender is becoming less of an issue in the art world.

As I mentioned, I am noticing women over 35 finally getting the recognition they deserve, and in a major way. It just takes longer for some people, especially when sexism is a strong force.

The prejudice towards motherhood, and the lack of support. A lot of women artists worry about how having kids will impact their careers, but it’s society and the art world that have made us feel this way. Everyone’s circumstances are different, but the fact is it can be done, and it can be done well. Just because one is a dedicated mother doesn’t mean that one is not a dedicated artist, or vice-versa. They’re not mutually exclusive. In fact, the two roles can feed off one another in an inspiring way, elevating the self as a whole. 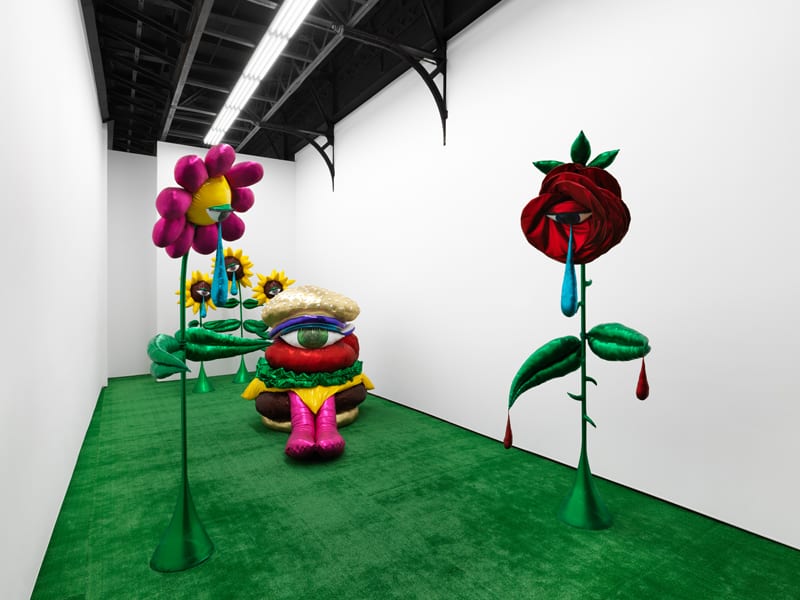 Your show that just closed at Marvin Gardens, Splendor in the Grass, was unlike any other gallery show on view right now. Can you tell us how it came to be?

I’ve been making spandex sculptures since 2015, but when Anthony Miler, the artist who runs Marvin Gardens, offered me the show last September, I really thought about what would look good in the space, which is long and narrow with 15-foot ceilings. I had made one of the flowers, which was originally 7 feet tall, but decided to make it 10 feet tall to take advantage of the high ceilings. I decided to make more tall flowers, and I was also making sculptures of food at the time, inspired by my girls’ favorite foods like ice-cream and pizza. Genesis Belanger had come over to my studio soon after I was offered the show, and I was trying to decide whether to make a show of food or flowers, and she said “Why don’t you do both? It could be a picnic” and then I realized that I was illogically trying to be logical. I mean, my work is already absurd, so of course it would make sense for me to combine the flowers and the food. So, I had a vague plan since September, and I worked on the whole show all at once. The gallery floor is a red brick concrete, which I didn’t think would match the bright colors of my sculptures, so I decided to put down Astro Turf. It worked out well, fitting in with the picnic theme and show title. 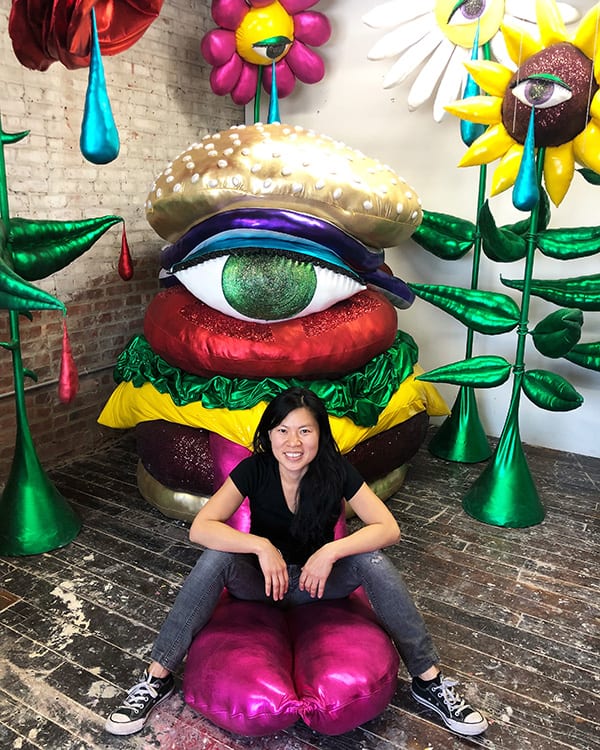 You’ve spoken openly about how giving birth does not need to end your career as a woman. You’re a mother to now twin 3-year-old girls. How have you continued to produce work in your relatively new role as a mother?

Right after I gave birth, I took time off from the studio for about two months, but after that I started going back to the studio little by little. By the time my girls were three months, I hired a part-time babysitter for the mornings for four hours, every weekday. I spent that time in the studio. I felt very desperate to make work, so I did any moment that I could, including at night when my kids were sleeping. I was really fearful that I would lose the part of me that is an artist, and I was worried about losing the career that I had been slowly building since grad school. Since then, as I’ve felt the need to make more work and I was getting more shows, I slowly increased my babysitting hours and for the past year I’ve had a full-time babysitter to take care of my kids, Monday through Friday. I know I am very fortunate in that sense. I treat my studio practice as any other job, so I am very disciplined about working in my studio when I have help. I don’t waste time. At the same time, when I am with my kids, early mornings, early evenings, and weekends, that time is very precious, and I make sure I am present with them and I schedule other things outside of their schedule. Now that my kids are three, they will be starting school in the fall, so I will continue to have that time to myself to make work.

Your work, especially in your current show, blurs the lines of what is real and logical with a surreal twist. Is this combination of lifelike and fantasy an important part of your practice?

I think of my studio as my fantasy, escape world. I need to have fun and derive pleasure from making my work, otherwise I wouldn’t be motivated to make it. The world in my head is surreal and blurs the line between what’s real and what is fantasy. I am just making the things that are inside of me that I want to see outside in the world. 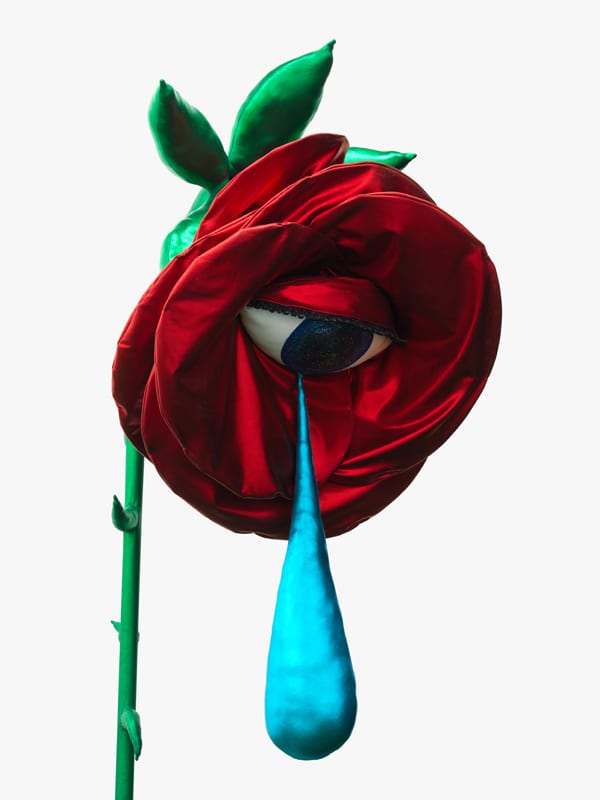 In terms of expression and inspiration, has your art practice changed since giving birth?

Before I had kids, my sculptures were more abstract, darker and more sexual. I went through some angry phases, like putting spikes and shards of broken glass on my sculptures. Since giving birth, my work has definitely become happier and more joyful, which it has been in the past, but having kids helped me reconnect to that side of me. My kids inspire me every day – I’m obsessed with them. Their cuteness is unbearable and the love I feel for them is intense in a way I have never known. The designs of their books, toys and clothing – lots of flowers, rainbows, hearts, etc. – have entered into my work and influenced it in a major way. At the same time, my work still has a level of subversiveness or perversion – I can’t let it get too wholesome – but I think the new joy and cuteness help balance the more perverse aspects and make it more palatable for the viewer. 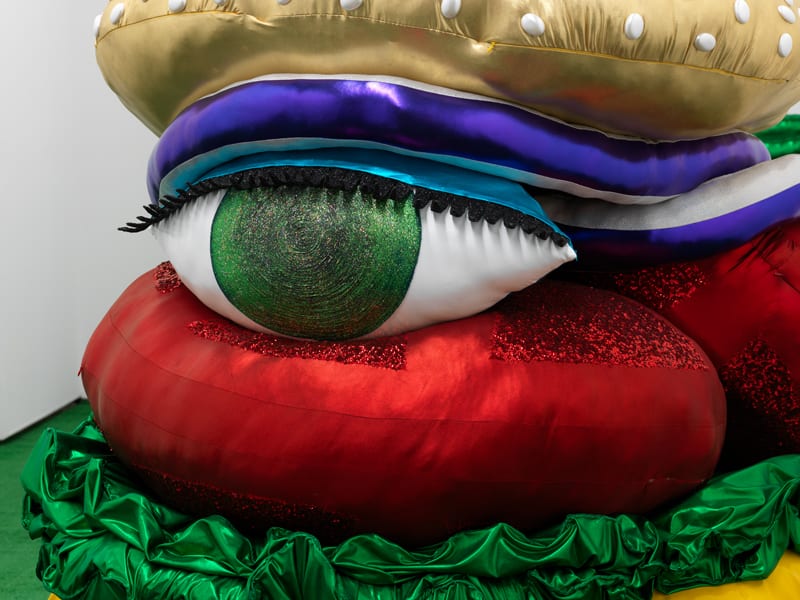 It’s hard to pick just one, but since you already interviewed Julie Curtiss, and she recommended Genesis Belanger, I am going to recommend Emily Mae Smith. As I mentioned, she is also interested in surrealist themes that the rest of us are interested in. Her work is so strange yet so classically painted, that it creates an interesting incongruity. I like to support other weird artists.