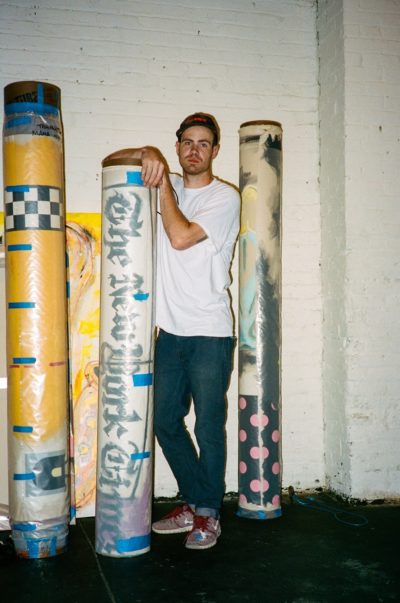 Hunter Potter is a Brooklyn-based artist whose canvases capture the stories often lost in the day-to-day hustle. Potter focuses in on the minutia of life, beckoning viewers to slow down and revel in life’s pleasantries that are so easily forgotten in society today. Using bold colors and combining painterly brushstrokes with geometric figures, Potter’s paintings become bigger than the tales they tell, taking on a life of their own.

Where did your interest in depicting minute moments of everyday life originate?

I think my outlook has always been microscopic. The little things have always had the power to float my boat and the strength to capsize the ship. When I look back at my own timeline in an attempt to recall certain moments or conjure up a dusty memory, I find myself using seemingly insignificant snippets as the markers on the map. Things my brother said while playing in the snow, certain cars that were parked in certain driveways at certain times, etc. They stand out to me and work their way into my overcrowded mental filing cabinet. I’ve never had the capacity to “zoom out” and I don’t think I want to—the cabinet is already crowded and storage space is expensive.

As far as applying this to art, most of the first concrete and successful examples I saw of this came down the line scribbled on railroad cars. Small symbols and scrawls on the ladders of rail cars, called monikers, that described everything from overcooked dinners to itchy bug bites to sloppy sex. This culture has a remarkable talent for noticing and immortalizing what would otherwise be taken for granted and condensing them into short notes on the sides of America’s rolling stock. To the world at large, that rusty scribble about the generous bartender in town might mean nothing. To the person responsible for the mark, it was the only thing that mattered at that moment in time. That bartender was the highlight of that particular day. When the mark is complete and the memory is documented, the boxcar rolls down the line and out of town. That is so freaking cool to me, the large release of something so small. 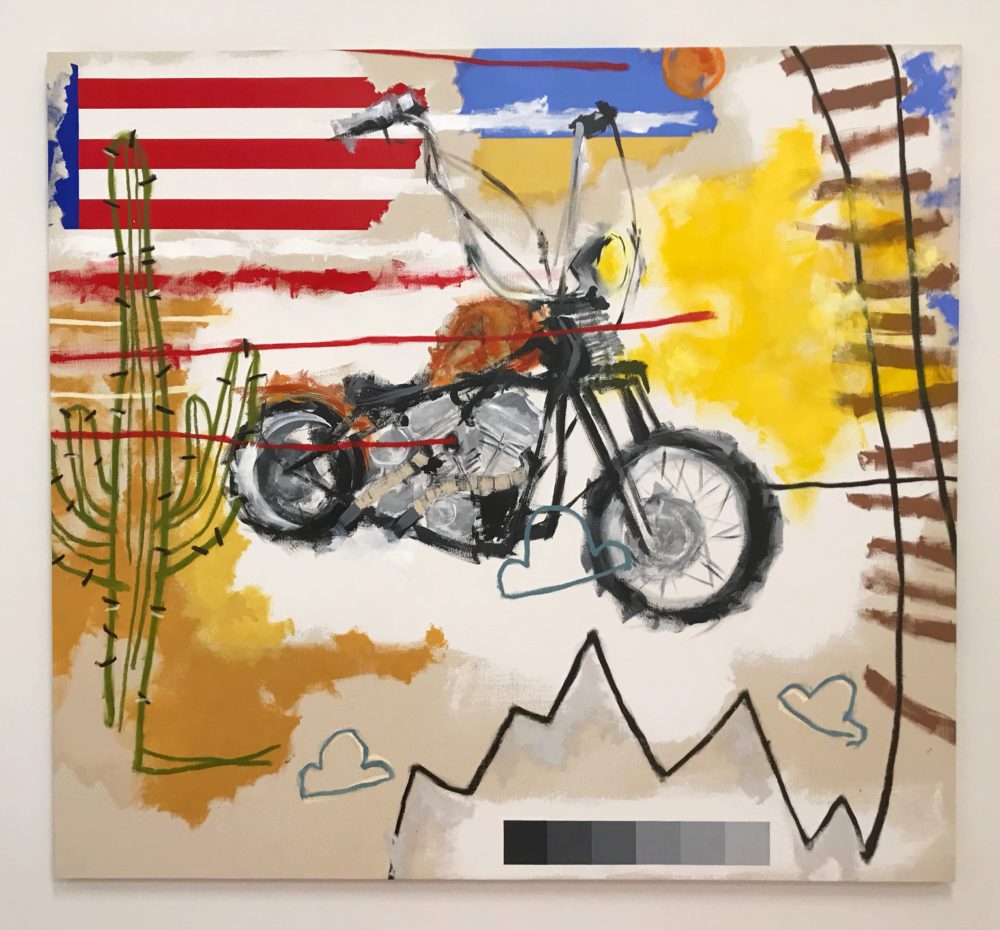 Can you walk us through a specific tale behind one of your works and explain why you chose to bring it to life?

Oh boy. Easier said than done perhaps. Let’s look at a piece I’m working on as we speak. I’m answering these questions from Northern Vermont as I’m here for a month-long residency at the Vermont Studio Center. So, the other night, there was an absolutely incredible meteor shower. Very cosmic. So about 40 artists from all over the world are lying on blankets in this dark field in the middle of nowhere on the edge of a small town in Vermont watching shooting stars. All of a sudden, this drunk fisherman comes stumbling out of the nearby woods and trips and falls right at all of our feet. He stole the show. For whatever reason, I thought this was the strangest and most remarkable moment I’ve seen in a very long time. This dude, out for a late-night fish and strong drink, somehow finds himself stumbling into 40 artists laying in a dark field watching stars. How many people can say that they’ve done that? Sure, we’ve all been drunk. Yes, we’ve all had crazy times. But how many of you have gotten so drunk that you wound up stumbling into a field in the middle of nowhere Vermont and laying down with 40 stargazing painters and poets? That deserves a painting! Immortalize that fisherman! 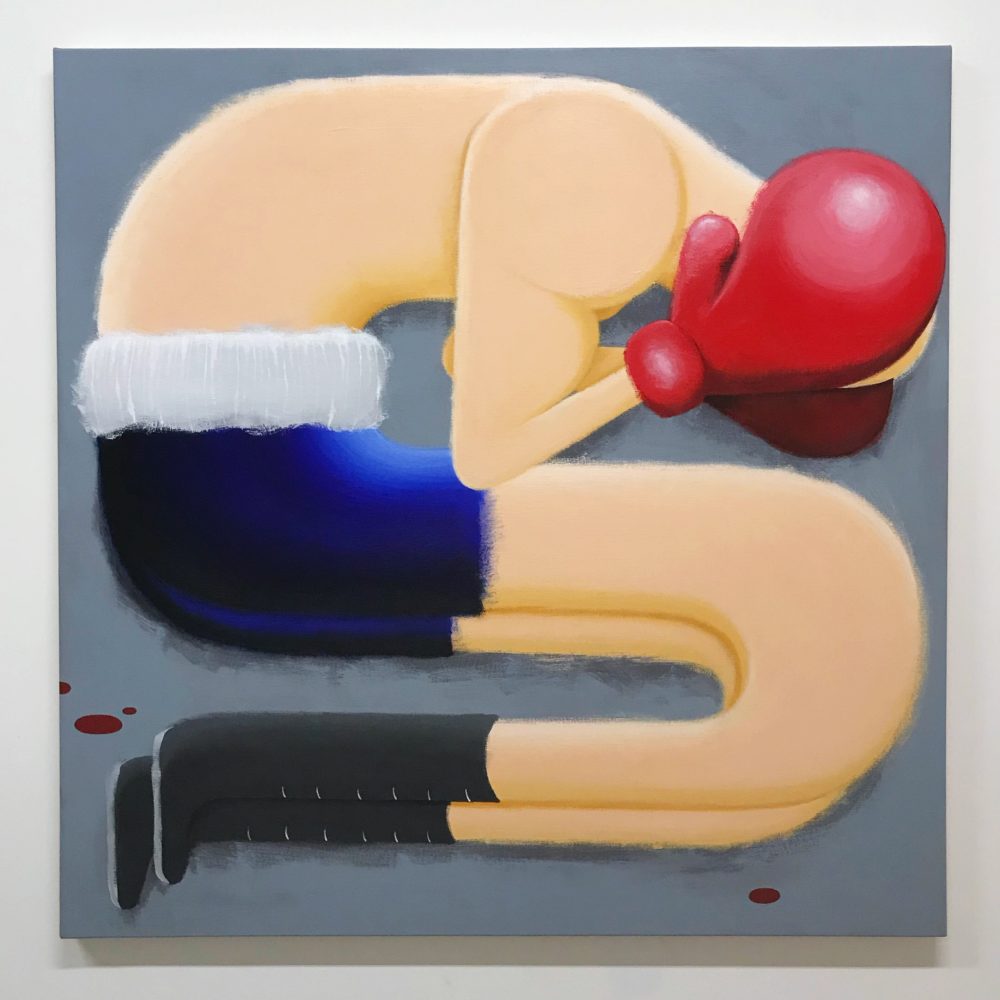 Where do you draw inspiration for your subject matter? Have some of these moments occurred in real life?

My subject matter is a result of the people, places, and things I surround myself with. They have all appeared in real life, though I may not have noticed them at the time. Hindsight, especially artistic hindsight, is always 20/20. My figurative characters come from the fringes of society—underdogs, criminals, fighters, runaways, etc. They’re the kind of people I’ve chosen to associate myself with for most of my life. I would rather spend a day with a shoplifter than a coupon clipper. General themes are drawn from actual things I believe, which I guess are drawn from the moral compass literature I pump through my Audible account. I am brainwashed by Audible and have no shame in admitting it. John Steinbeck, Larry McMurtry, Wallace Stegner, Ernest Hemingway, and a couple others are the usual suspects for background noise and inspiration. Over the past couple of years, it seems like their work has acted as an informal user manual for my life and my artistic decision-making. WWJD—What Would John (Steinbeck) Do? 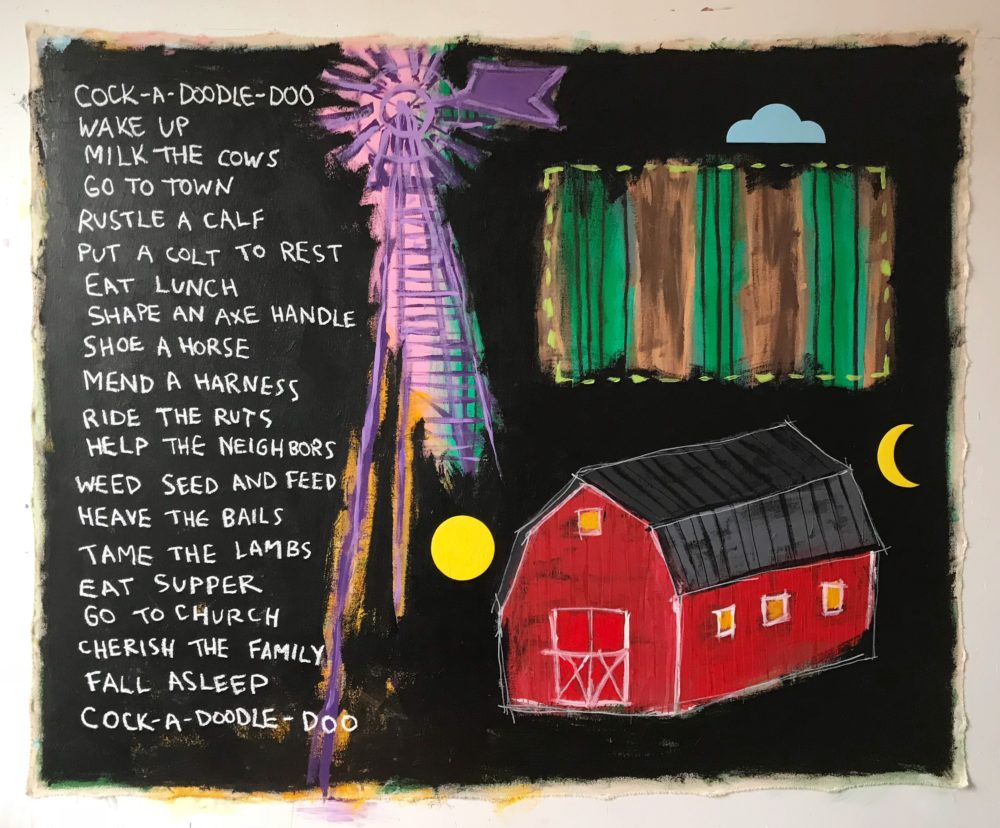 You often paint on expansive canvases. When did your preference for creating on a large scale begin?

I don’t think I consciously realized what a difference it made until I was apprenticing for Colossal Media to paint billboards in the City. Their portrait painters are painting nostrils and pupils larger than minivans with ease! It is so goddamn fun to be working on something that is bigger than yourself—to be moving your shoulder rather than your wrist—and to create a piece large enough to enter. Until you back up or, in Colossal’s case, until you get off the scaffold, you have no idea if your efforts have even worked. I am just getting to this point with canvas and it is exciting. A big canvas can really beat you up and a lot of time I still get the shit kicked out of me and wind up exhausted and frustrated. But other times, when I swing and connect, I can stand back proudly. I do not get this same sense of triumph from small work. David versus Goliath!

How intuitive is your creating process? Do you pre-plan what will go on the canvas or does the finished product come about organically?

The process varies. Some of the pieces are pretty cut and dry, especially the character-based ones. I envision a scene that I want to depict using my cowboys or boxers or whatever and I do it, case closed. Other work is much more exploratory. I have a concept to digest or a feeling to convey or a story to tell but I do not always know how. It can also be the other way around. I might not know what I want to say specifically but I know that I want to do it, whatever it may be, with paint and a brush. Sometimes I think before I act, and other times I act before I think. When it goes well, the work seems to fall into place as I react to each mark. When it doesn’t go well, I end up with a blob that looks amazing in a dumpster. 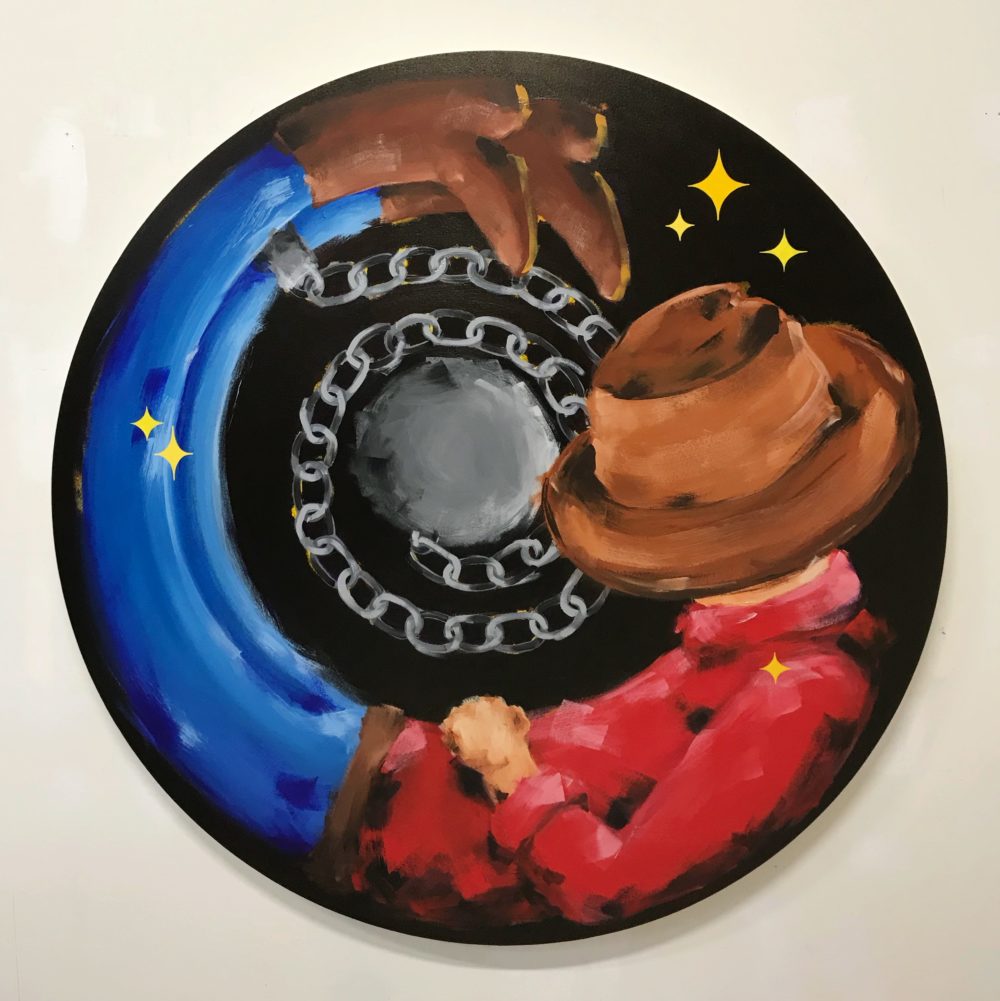 If you could pinpoint your work within the scope of others who came before you, with which artists would you consider yourself aligned?

My stuff is pretty poppy in the sense of emphasizing and spotlighting the everyday moment and I don’t think I could ever separate myself from the influence of that scene. Rosenquist, Warhol, Lichtenstein, Wesselmann, etc. All of the names you would expect. James Rosenquist’s autobiography was actually the sole reason I wanted to try painting billboards in the first place—the white rabbit career aspiration I chased to New York City. Thanks for that, James! Here and now, I drool over the work of Katherine Bernhardt, Eddie Martinez, Barry McGee, and several others. 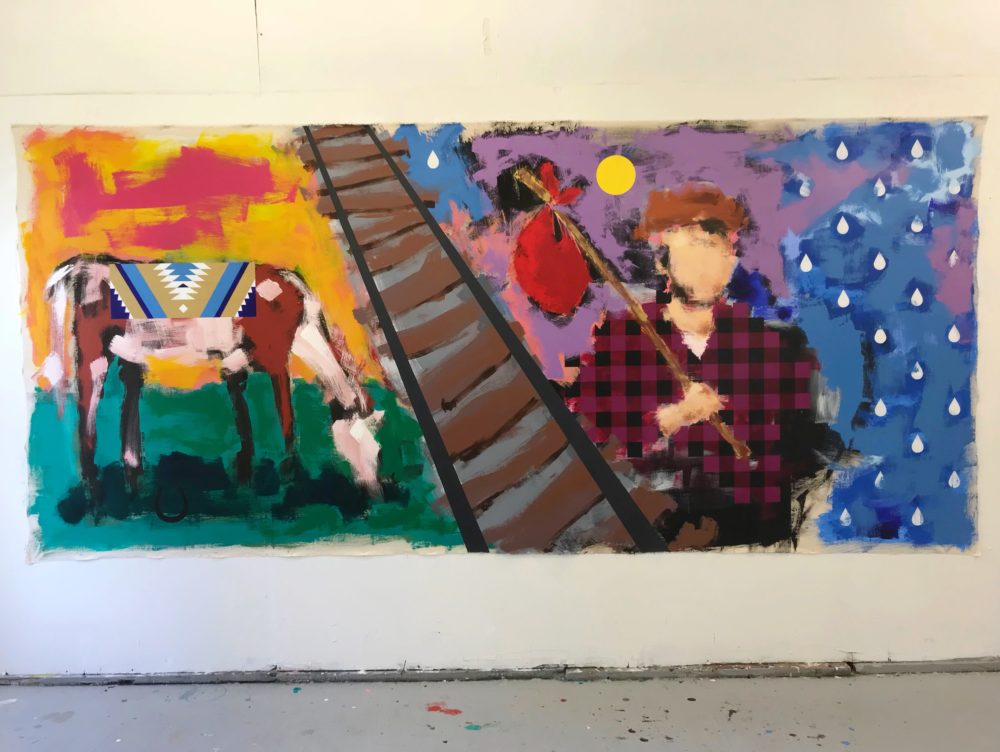 How do you consistently challenge yourself in your practice?

I make myself paint whether I want to or not, every single day. It is pretty freaking frustrating to embark on a canvas without a plan, an idea, or even a desire. I will quite literally push colors around until something clicks. I force it and, like most aspects of life, forcing something out of nothing can be pretty damn challenging. Once you have something, however, the excitement is uncontainable. The fire is lit! The challenge has been won! I can’t sit around and wait for a lovely idea to fall into my lap, that’s too easy and boring. I guess what I am trying to say is that you don’t need a key for the front door if you can break a window and climb in through the living room. It might be a little harder and even a little more dangerous to enter through the window, but it is certainly more fun!

How does your work fit into the complicated landscape society finds itself in today?

My work begs the viewer to forget the big picture, however troubling it may be, for even just a few short seconds.

What do you want your audience to walk away with after viewing one of your works?

I want my audience to remember that the micro still matters.

I am not sure what’s next. I will finish up this residency and have my fellowship show at the Roger Smith Hotel in Midtown (opening Thursday, September 13!) and then I do not have anything concrete figured out. I think that that is what has me excited right now, the lack of concrete. Maybe I will drive to Alaska or maybe I will just take a nap. 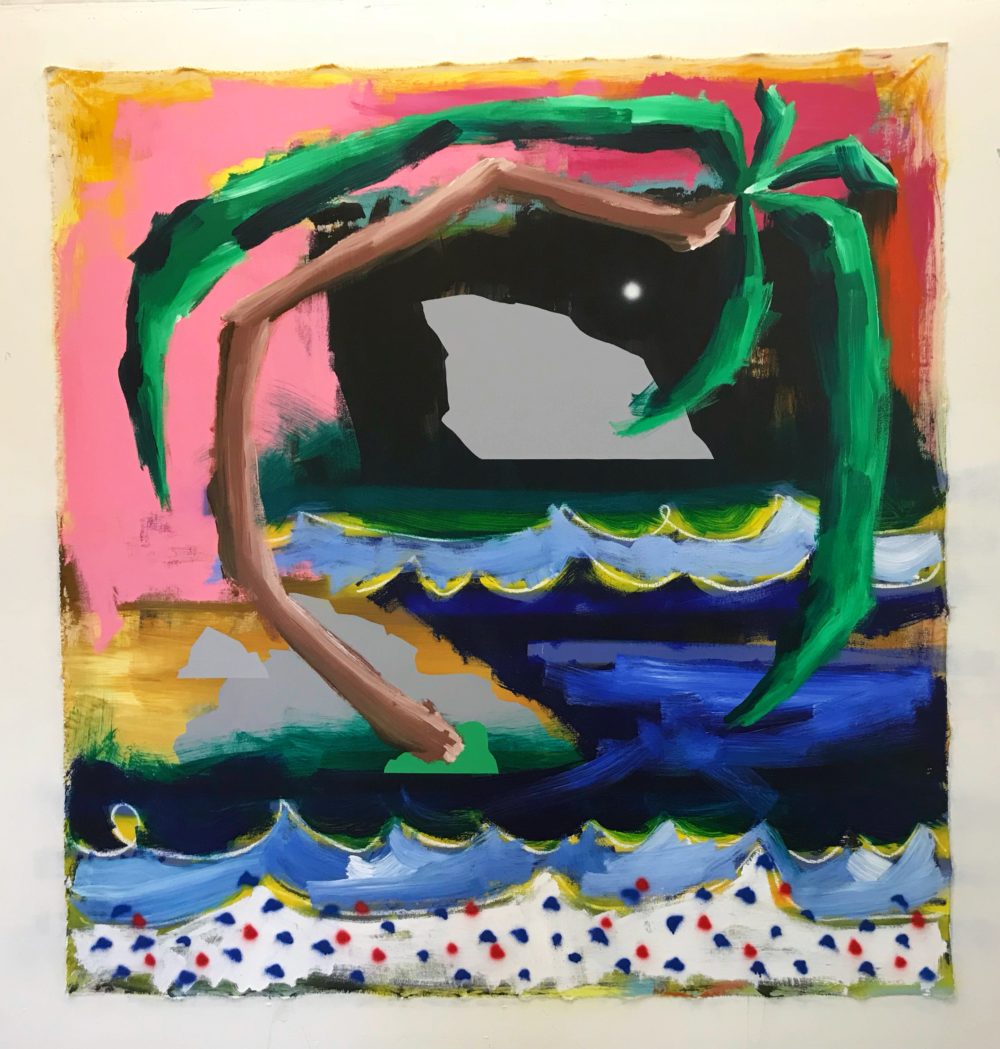 I think it would only be fair to pass the torch to Jack Byers. Artistically we have done quite a bit together and, more importantly, have continued to send each other sporadic run on sentences and undeveloped thoughts and ideas for years now despite the physical distance between us. God bless the iPhone. Jack is based in Boston and manipulates text across multiple mediums to snap his viewers to attention whether they were planning on it or not. He shakes things up and I owe him a lot as both a friend and as an artistic contemporary. Check him out on the almighty Instagram @jackkbyers, cheers dog!

The Impenetrable Stare of Cinga Samson