There is a risk in painting images that are engrained in culture, overly depicted, and possibly even cliché. Not only has Josh Smith made this his trademark style of representation, but he continues to do so in transformative ways that keep audiences around the world captivated, waiting to see what he comes up with next. 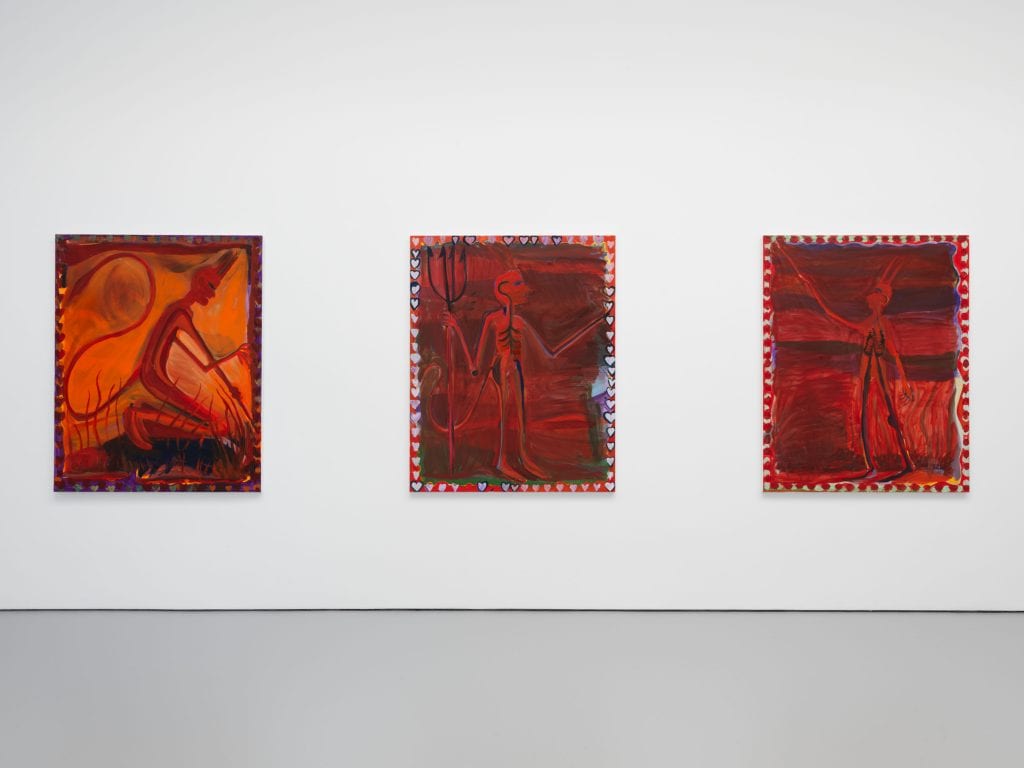 In Smith’s inaugural solo exhibition with David Zwirner Gallery, he constructs Emo Jungle, a vast, multi-room exhibition that traces his many representational motifs – perhaps most notably his palm tree – and introduces a few fresh renderings that have never before been seen. Each room of the exhibit contains a distinct energy, creating different experiences as you traverse the space. Where one room contains blood-red canvases with demon-like creatures, another presents grim reapers adorned with rainbow-colored palettes and hearts.

Smith’s paintings have clear dichotomies on and below the surface. He embraces elements of life and death on the same canvas, with reapers alongside of flowers and skeletal creatures that seem to have come directly from the underground surrounded by borders of pink hearts. 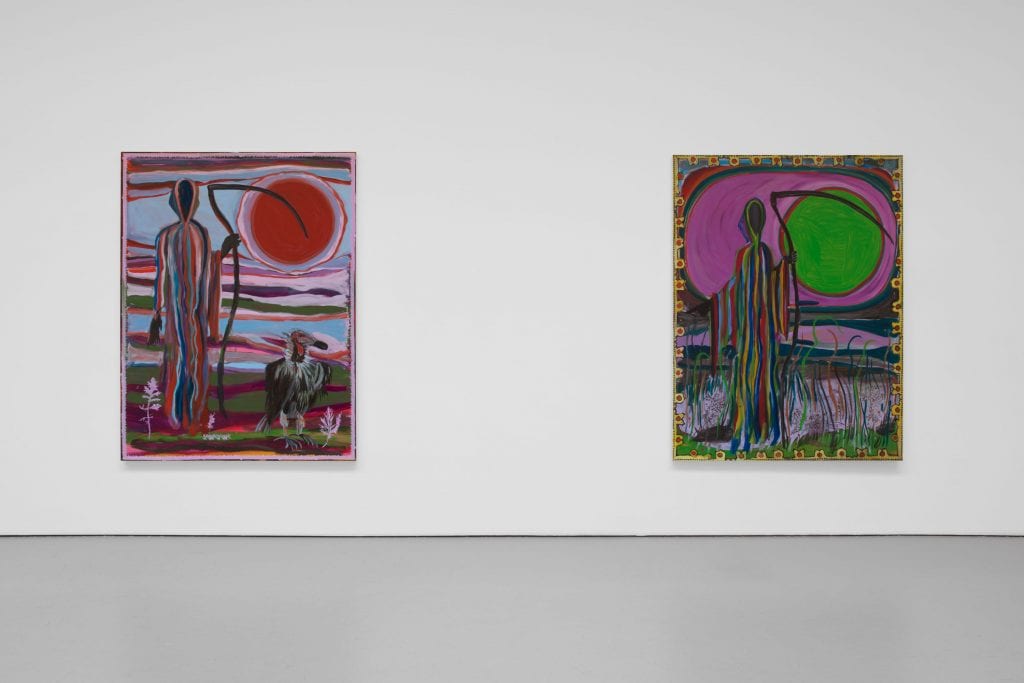 After Smith choses the main focal point on each of his painting, the rest of what he depicts on the picture plane seems to be an afterthought. Noting the subtle changes across each canvas is like a game of iSpy. Though the forms become recognizable, Smith’s finishing touches are worth paying attention to. He merges the figurative with the abstract, using a color palette that pulses off the constraints of the canvas. Though giving us the entire spectrum of the rainbow, Smith still manages to maintain an overall dark approach to his works. 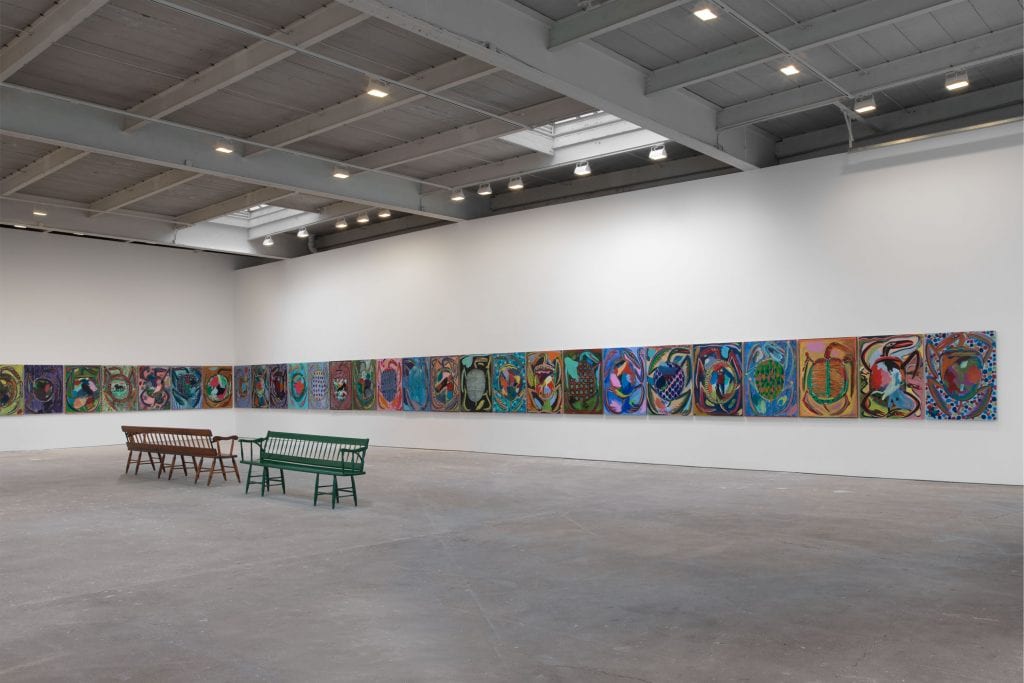 The pinnacle of the exhibit is a massive gallery room covered in Smith’s debut turtle paintings. Forming a U shape across all but one wall, Smith repeatedly presents the same painting with an array of different formal attributes, including various patterns, shapes, and design-elements. 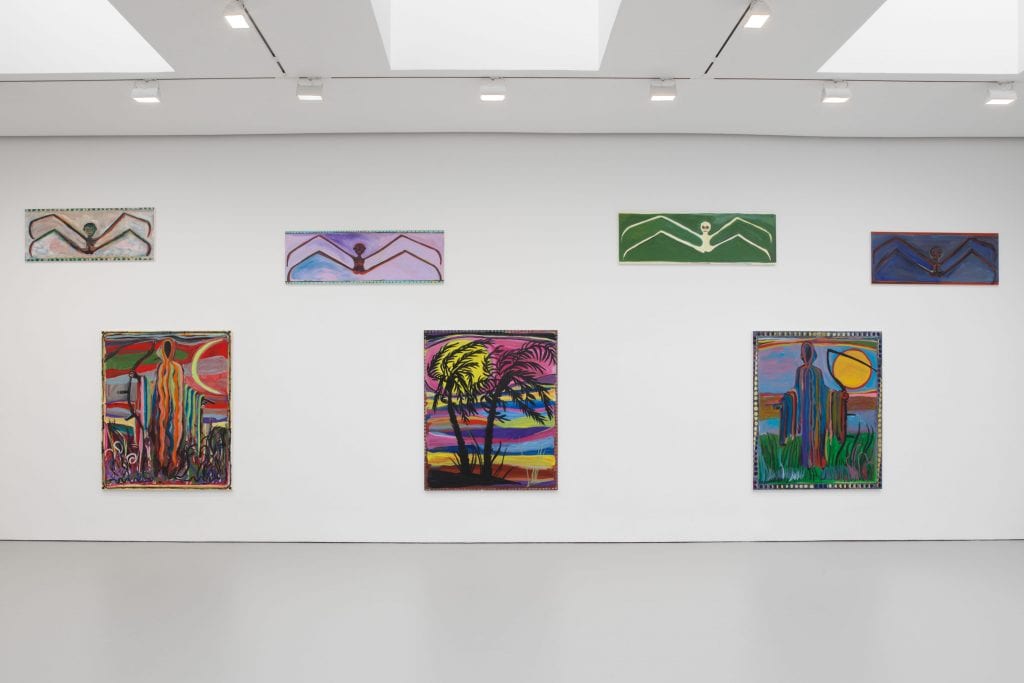 Smith’s practice is instinctive and spontaneous. “The meaning perhaps arises in the making”, Smith explains in the press release for the show, “leaving the viewer something purely for their visual engagement. They don’t have to be burdened with the meaning.

Here, Smith sums it up perfectly. Though admittedly devoid of deeper meaning, his works are visually captivating and full of wonder.

Emo Jungle will be on view at David Zwirner 19th St through June 15.