Jeremy Olson’s paintings combine the worlds of surrealism and fantasy. He constructs peculiar characters that have recognizable human traits, such as hair or teeth, to give the viewer an access point into the scene. In his work, Olson tries to capture certain universal emotions that we can all relate to, presenting them in such a way that is unfamiliar yet appealing. Olson is based out of Brooklyn, NY.

Your work contains an interesting visual experience – qualities that seem familiar share the same surface as surreal elements. Can you speak about this balance and what feelings you are trying to encapsulate?

I want the work to be a kind of encounter, both for myself and the viewer. The feelings I’m trying to get at are complicated ones, related to both desire and anxiety, nostalgia and failure, all that Freudian stuff. Most of the figures or objects have anthropomorphic qualities and often blend between categories.

If nothing is familiar or recognizable and it’s just pure fantasy, that’s not so interesting to me. But if there’s a sense that I know where it begins but it’s slipping into something I can’t quite locate, then there’s a possibility for discovery.

I’m interested in the different characters that come to life in your work. Who are they and what is their meaning? What role do they have in your work?

It changes from painting to painting, I don’t tend to work from a pre-existing narrative. I develop the characters or figures through drawings until something clicks. They may exhibit emotional states or perform unknown rituals, they may interact with each other, or engage more directly with the viewer. They generally are not stand-ins for actual people in the world, but there needs to be either some empathic or visceral connection for me to stay engaged.

You use some recurring motifs such as hair, a pink sky. Do these have any special symbolism?

The pink sky became a way to tie the recent paintings together, as if they exist in the same world or just the same time of day. There’s no direct meaning beyond the feeling that kind of light allows.

The hair thing, on one level it’s just an appealing subject I keep returning to. It’s sensuous to paint. But it’s also such a good vehicle for that combination of desire and repulsion related to having a body, there’s that disconnect between the perfect hair in a shampoo ad and the hair you pull out of a drain. 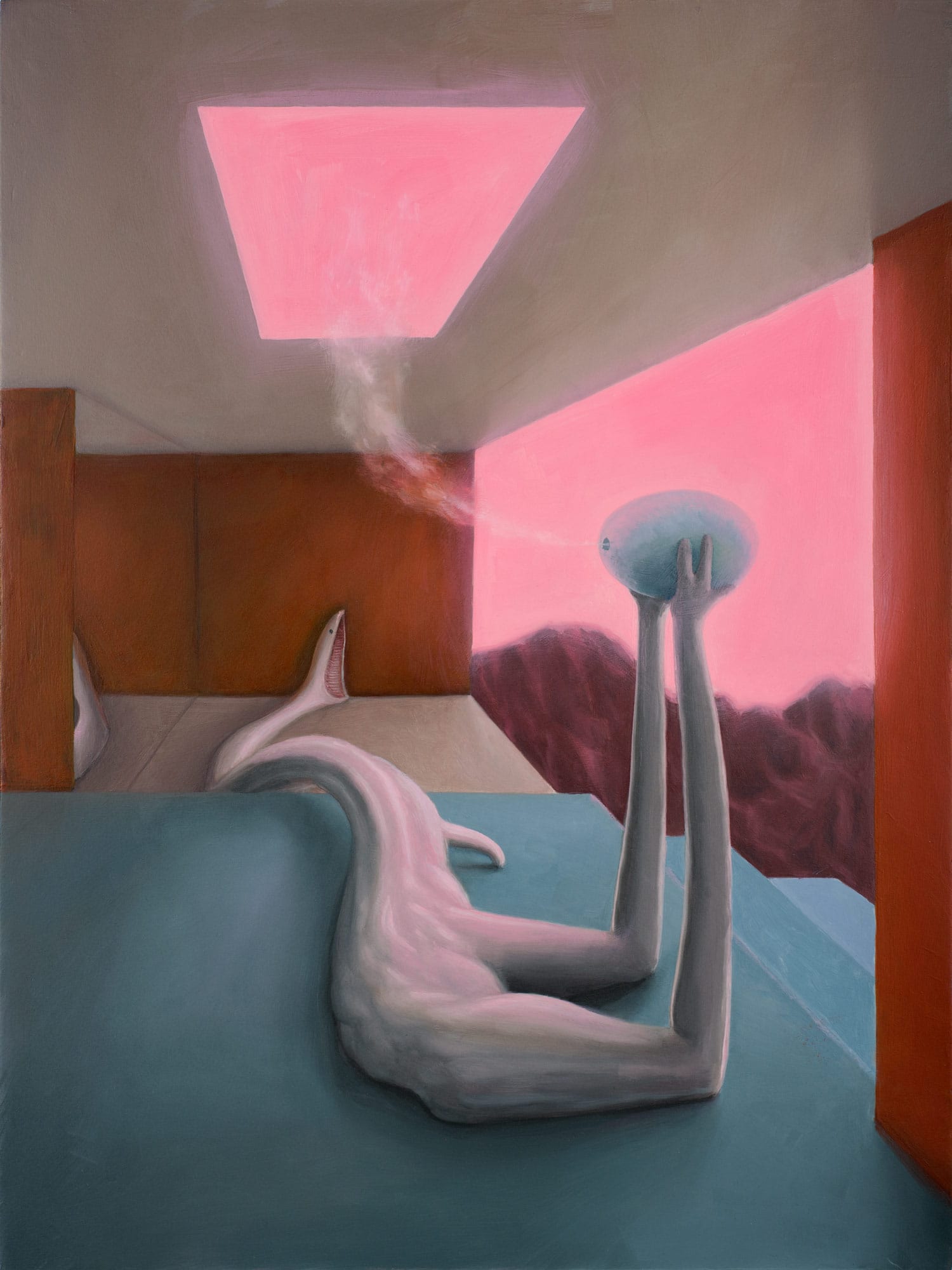 Do you see your work as a quasi-reality?

The recent paintings cohere in a way that suggests world-building, but that’s not really my goal. If to some extent I’m making a fictional universe, it’s full of trap-doors and broken threads that call attention to it’s artificiality.

What kind of stories does your work tell?

It’s different for each thing, really, and I often change my mind. Some are about empathy, engaging with characters in various emotional states. Others are more engaged with alienation, commodity fetishism, those sorts of things. They are in any case open-ended.

Is there something in particular that you hope a viewer of your work walks away with?

I’m always interested in how people respond to my work, but I don’t have a specific answer to that.

What’s next for you? What are you excited for this year?

I just started working with this new platform Artfare, I’m excited to see where that leads. Otherwise just hoping for a lot of time in the studio, there are a lot of projects in various stages of completion.