Joshua Nathanson is inspired by early modernist paintings, though his works feel right at home in 2018. Nathanson employs varying techniques and subject matter to create reluctantly cohesive canvases that leave viewers transfixed. He is represented by Various Small Fires where his most recent exhibition, An Idea Because They Ate It, is on view through October 20th. Nathanson lives and works in Los Angeles, CA. 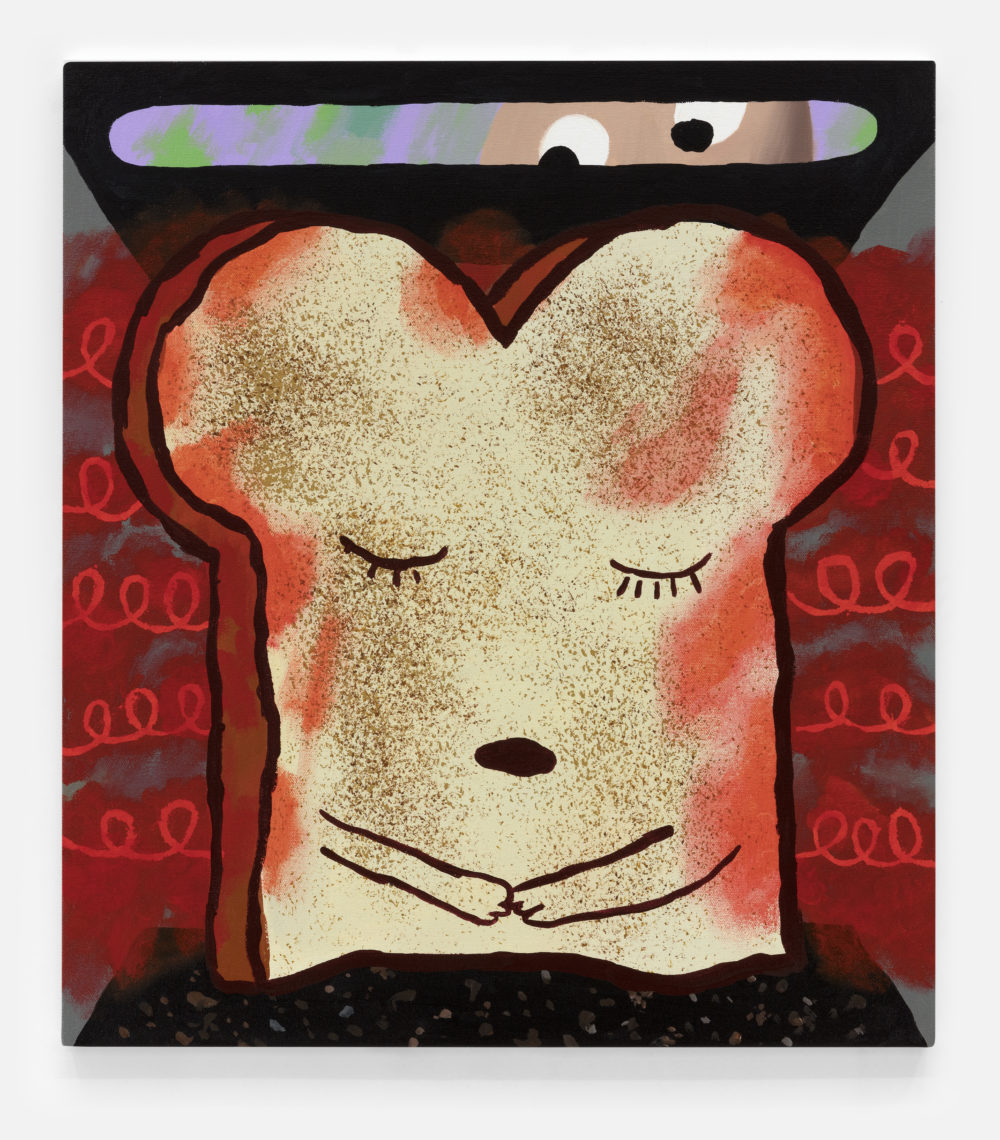 How much of your process is intuitive and how much of it is pre-planned?

In the beginning stages of my work I use a lot of intuition. I’ve always kept a sketch book and I feel that it’s really important to make a ton of drawings and not care too much about how they look. My best ideas usually come when I’m in a clear and meditative state of mind and I’m able to let the drawings happen on their own.

Once I have a bunch of drawings I’ll go through and rework stuff and sometimes combine them. I keep refining and use an iPad and Photoshop to flesh them out with colors. Some of these become images I want to paint. By the time I actually start putting the paint onto the canvas, I have a clear plan of what I’m going to paint. But I keep everything pretty loose through the whole process so that it’s still fun to paint and there’s room for experimentation and happy accidents.

From time to time, I’ll step way back from my work and become hyper analytical. I like to make lists like “Things That Are Working”, “Things That Aren’t”, “What to Get Rid Of”, “What To Add” etc. Then I’ll go back to being intuitive again but with some of those ideas in the back of my mind. 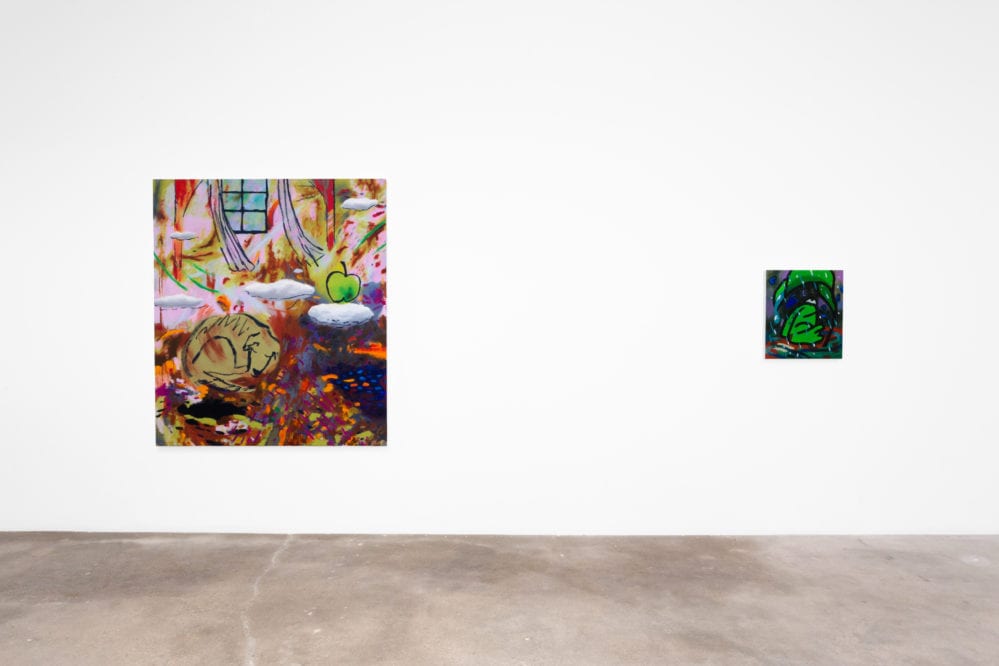 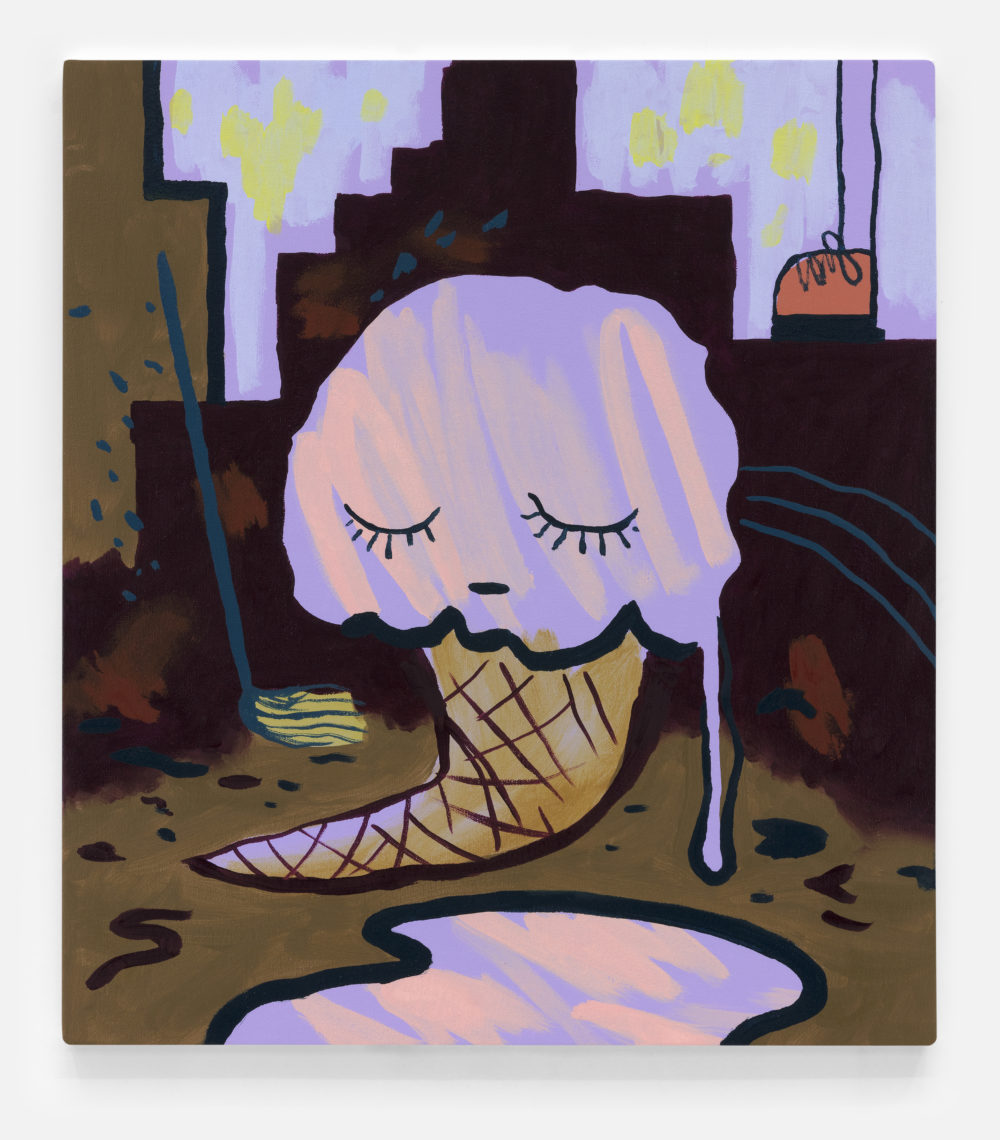 Do you use different application techniques within the same work?

Yes, for sure. Especially now. In terms of traditional oil painting techniques, I feel like I have an “everything and the kitchen sink” approach. I’m using washes, wet into wet, scumbling, palette knives, oil sticks, etc. And sometimes I just use my fingers. It’s fun to let the paint get really built up and to get lost in it. Sometimes I think “Oh god, what am I doing? This is a total mess!” but if I didn’t give up the desire to control everything then it would get really stiff and nothing would happen. When you’re smooshing paint around on the canvas it’s infinitely complex, so there’s really no way to totally wrap your head around it. You have to let your intuition do a lot of the driving and that can be difficult, but it leads to some great results that you would never get any other way. 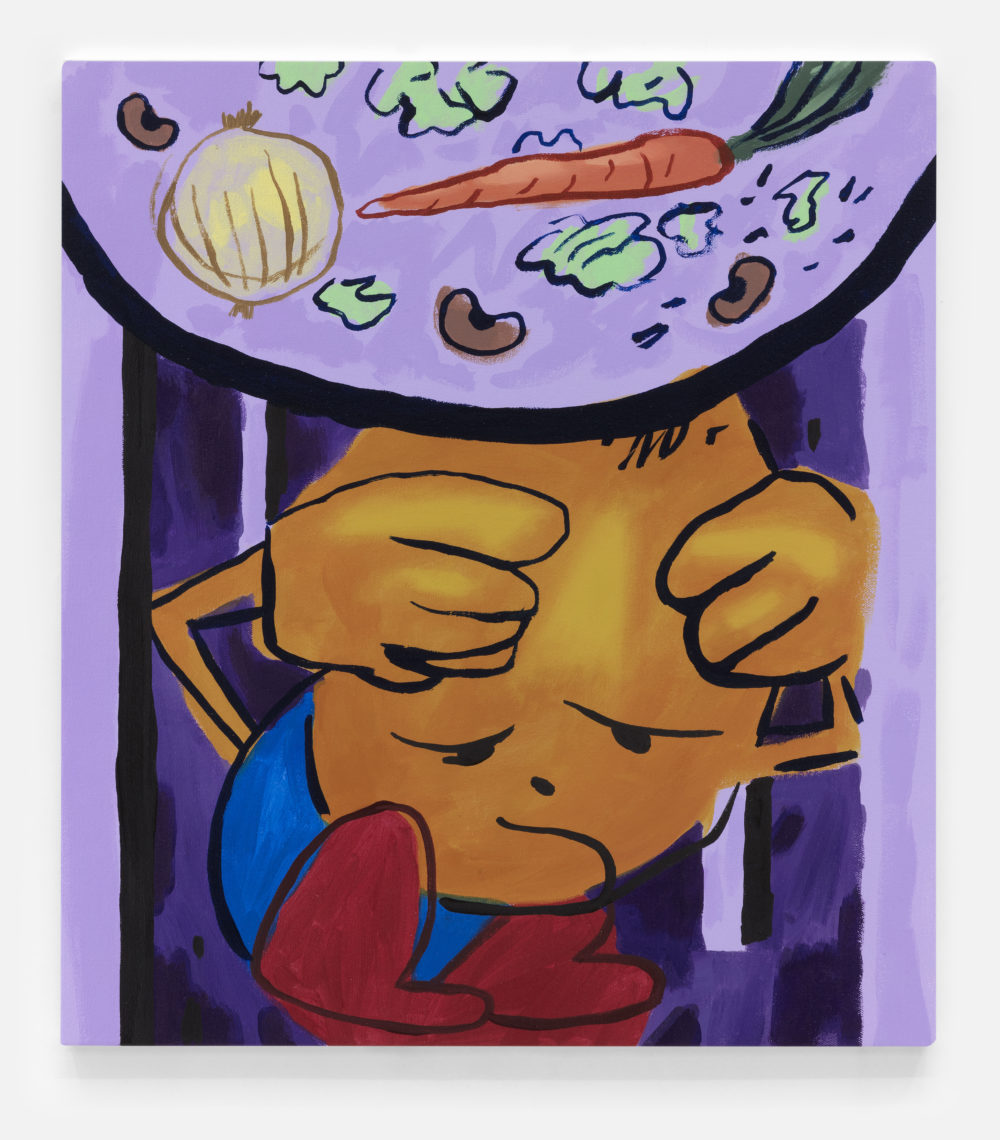 Do you view your sculptures as an extension of your paintings or vice versa?

The sculptures feel like extensions of the paintings. Painting allows me to create a complete world with its own rules. I like to see if I can take pieces of these worlds and put them out into the actual world. I studied a lot of ancient art and I’ve always been interested in the way that they have a unified aesthetic that cut across all mediums. In the early 20th Century we had all those movements trying to create the Gesamtkunstwerk (The Total Artwork), but in a way they were just doing a Modernist version of what every ancient society had already done. In any case, I like trying to get different mediums to communicate with one another and to see how each one can say the same thing in different ways.

Your works have at once a playful and childlike air about them and a sense of anxiety and chaos. Can you explain why you choose to fill your canvases in such a way?

I try to maintain a sense of awe and wonder toward the world. Especially in terms of basic experience. Like closing your eyes and watching the weird colors swim around on your eyelids. And I guess being playful and silly is just part of my nature. That’s why I love kids and I appreciate a lot of the same things that they do. But at the same time the world is pretty messed up and there’s so much suffering. Also, it’s really hard to feel like there’s a sense of purpose or meaning. So that’s where some of the anxiety and chaos comes from.

I try to combine all these things and to let them inform each other. I think every era has its own weird set of mental states and disorders. For me, in my era and in the places I’ve lived, I get a sense that a lot of us are a bit manic and ADD. Going from states of euphoria to depression with a lot of anxiety along the way. I can’t speak for everyone but that’s been my personal experience. 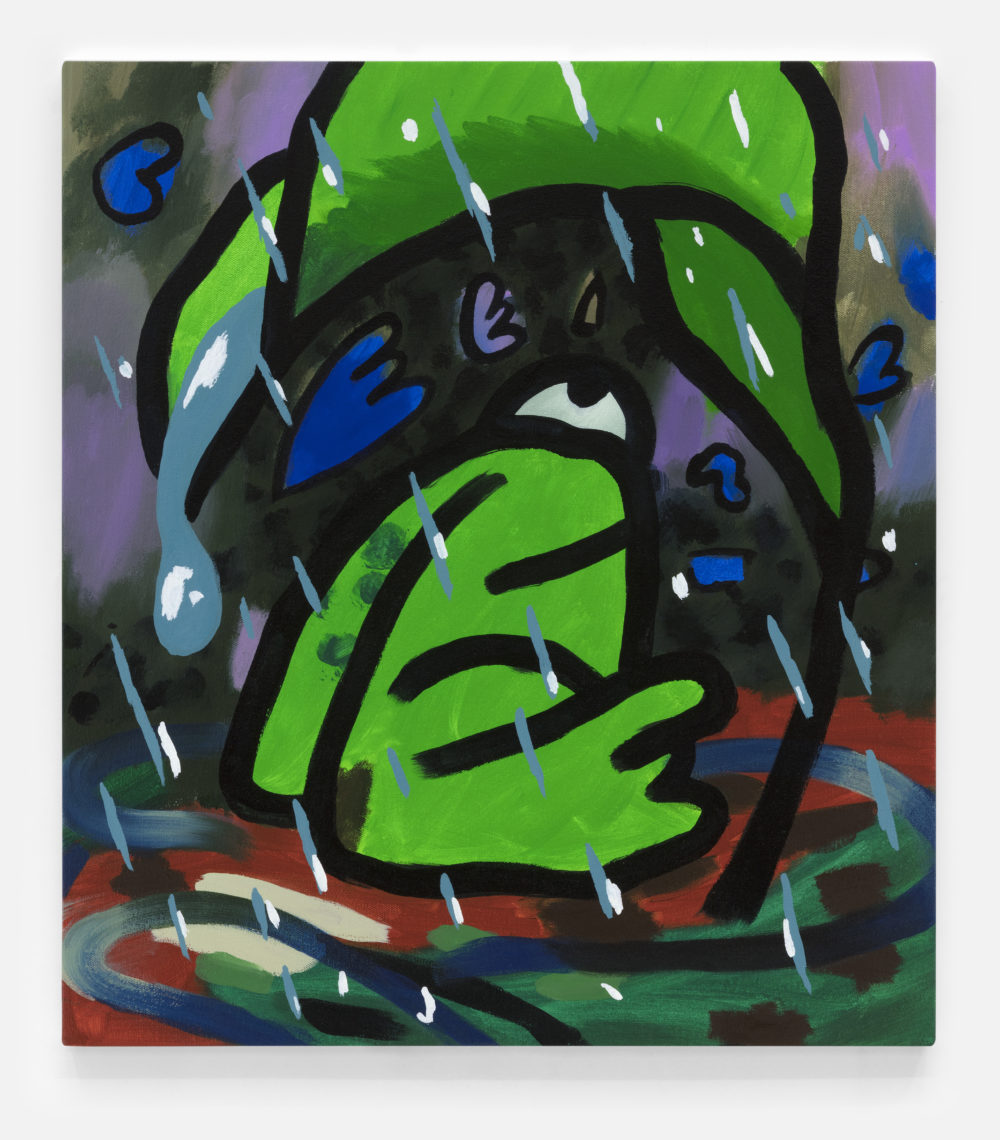 The works for your upcoming show at VSF are quite different than your previous work. Can you explain your shift, what triggered it and what the driving force behind this new body of work is?

I’m proud of the work I was doing before. Even though it looked relaxed there was a lot of technical precision behind it. I used a lot of airbrush and was able to get it to look really perfect. Airbrushes can produce these amazing fades of color that leave almost no trace of the hand. I thought it looked really amazing because it was close to being pure color and color is the thing I care about most in painting.

But then I started realizing how fun it is to look at messy stuff because you get to see how the painting was constructed and the paint doing it’s own strange things. Like when I smear a few colors together under a palette knife you can see the record of how it was made as well as the weird swirls of paint that sort of happened on their own. It rewards a close look because there’s so much going on in there.

Also, previously I was drawing things from real life. Mostly crowded places like beaches, parks, shopping malls, etc. And the paintings were loosely based on those scenes. But for this show the themes became more abstract and I made everything straight from my head. Mostly I was thinking about ways of withdrawing from the world. So, you see a kid hiding under a table, a sleeping dog, a piece of toast inside a toaster, etc. I was also thinking about withdrawing into fantasy worlds, so a lot of these works have a dream like fairy tale vibe. They’re very trippy which is similar to withdrawing into the weirdness inside your head. 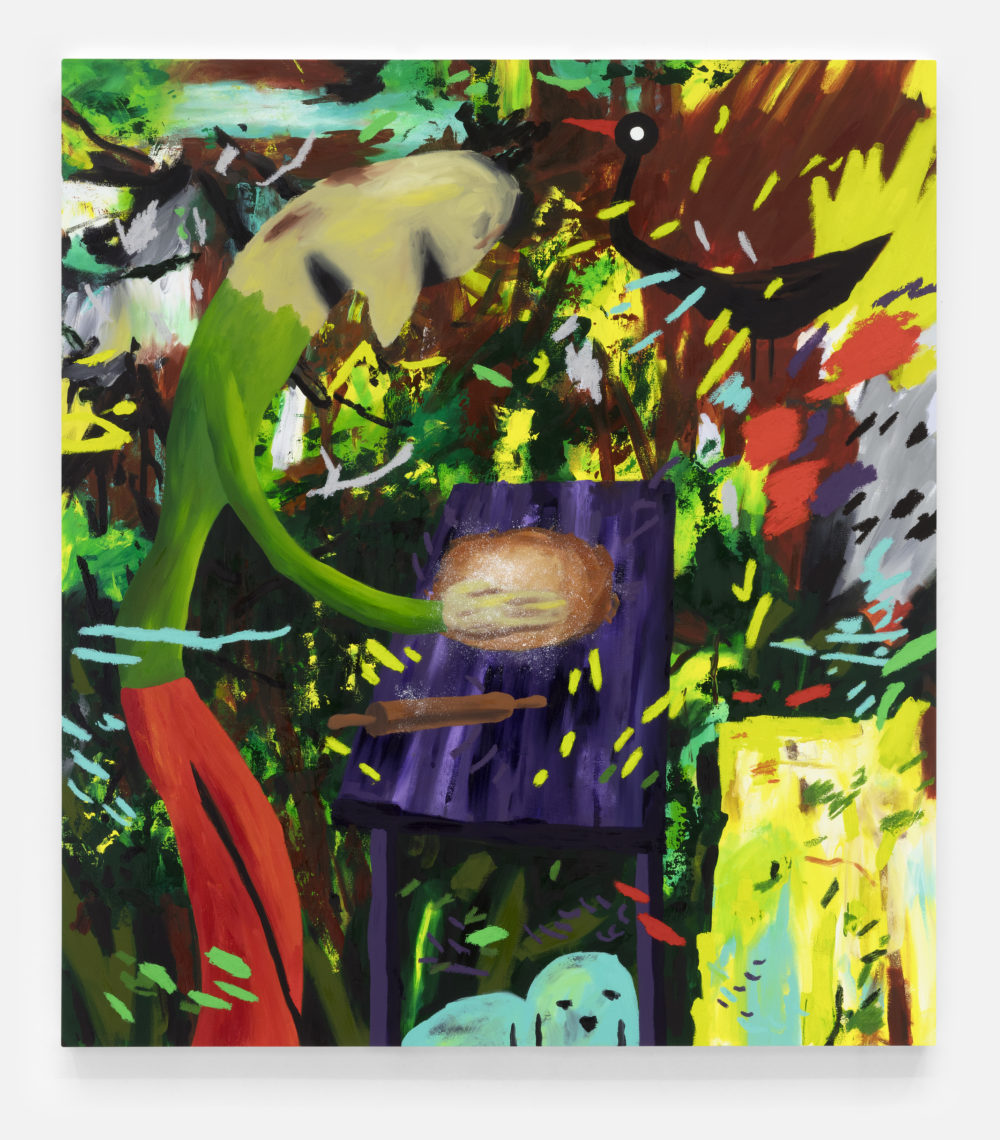 What do you want the viewer to gain after viewing one of your works? Is this something different for your previous body of works than it is for this new one, and if so can you explain the difference?

I try to reflect on my way of seeing the world and to find small ways of seeing it differently. I hope that people will look at the work and think “wild, yeah that’s sort of how I see it too, I hadn’t really thought of it like that before”. And hopefully through this experience they feel a bit more alive or at home in the world.

That’s been my broad overarching goal for a while. But my previous work felt sort of similar to looking at a backlit screen and made me think about technology in a really general sense. I still love all that stuff but recently I’ve been wanting to slow down, connect to the IRL world and I’ve even been feeling a bit nostalgic. Getting into the gnarly oil paint stuff made more sense with where my head was at. I hope that others can relate to these new sentiments too. 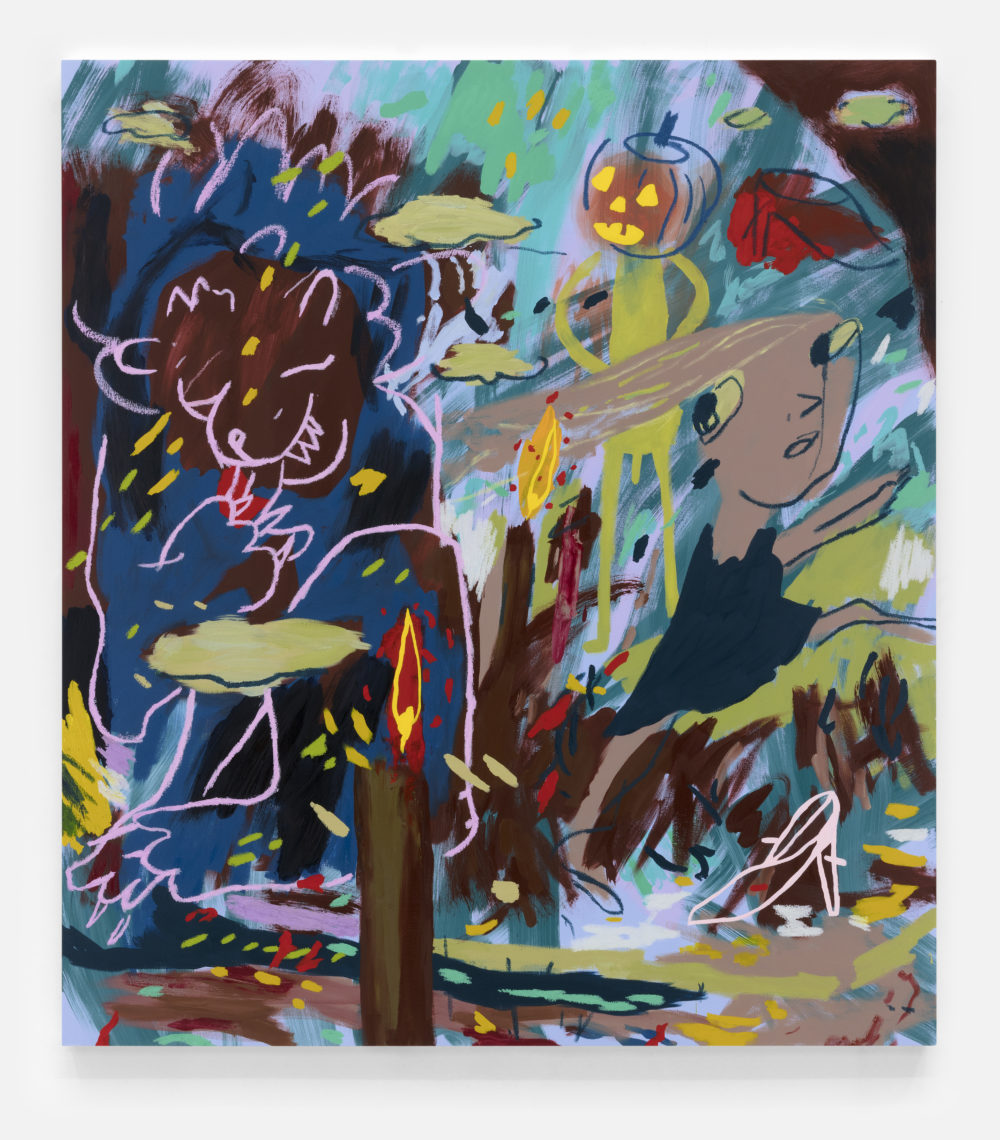 Did you find making a shift to this kind of work to be challenging or did it come naturally?

Really I just I wanted to add some materiality into the work and to play with new subject matter. I thought it would be super simple, that I could just walk into the studio and shift into a new way of working in a matter of weeks. But really it took about three months of experimenting before I felt I had arrived at a new set of parameters that I was happy with.

I was so ready to embrace a new way of working that at first, I abandoned a lot of what I was previously doing. I did a lot of experimenting with different techniques and ways of working. For instance, I made some paintings without planning anything out in advance, while others were very planned and got very detailed and sort of baroque. It’s easy to trick yourself as an artist, to think “Voila!, I’ve done it!” and then you come back to the studio the next day and realize it actually sucks. So, I try to give myself at least a week before passing judgement on the things I’ve made.

I had all these weird paintings hanging in my studio and I wasn’t sure what to make of them. And then I tacked up some images of some of my favorite works that I had made within the last year and had a bunch of studio visits. Ultimately, I realized that I could combine some of my old ideas with some of my new ones. And then I got to work.

Who are your biggest inspirations and why?

I always find myself coming back to some of the early modernist painters like Matisse, Vuillard, and Bonnard because I really love the way they played with colors and forms. Their paintings were so moody and full of life but also very peaceful.

In terms of contemporary painters, Chris Ofili has always been my favorite. He just crushes it all the time. They’re so lush and inventive. Also, I love Ida Ekblad, Richard Aldrich and Maria Lansing. I just found out about the work of Elizabeth Macintosh. I think she’s amazing too. All of these artists are doing wild formal experiments but also melding that with subject matter in a very poetic way. I guess that’s my thing. ¯\_(ツ)_/¯ 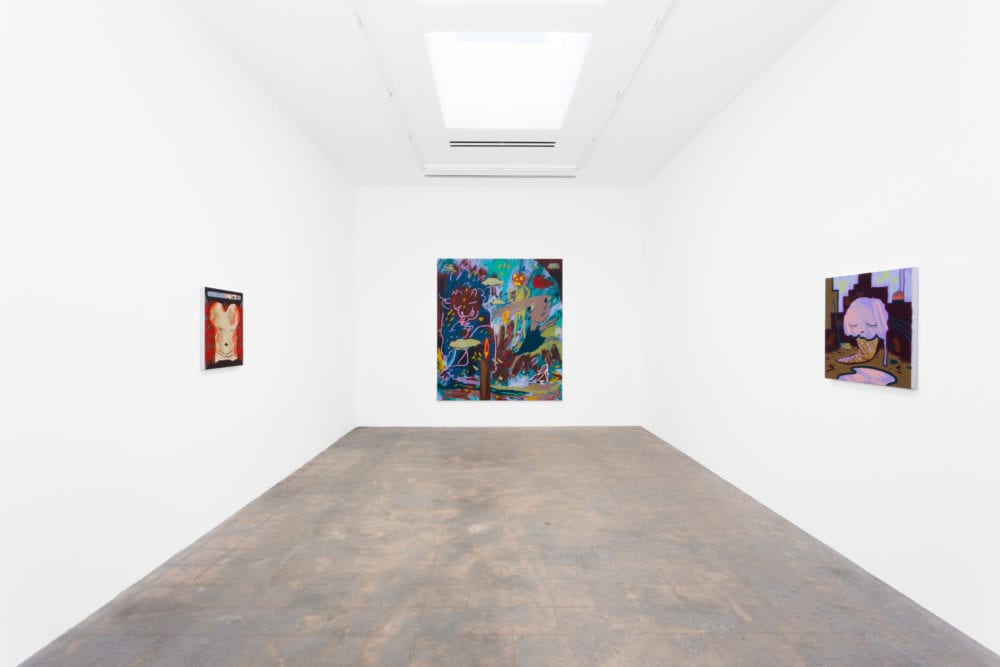 If you could recommend a friend/artist who you think we should interview next, who would you choose?

I would choose Asha Schechter. He’s a good friend. His work is really smart and playful. He’s addressing some of the basic questions that seem fundamental to the current state of things like: where do images live when they are everywhere? What’s the relationship between production and consumption? How do commodities define us as individuals and signify taste? He has a show in November at Shane Campbell. 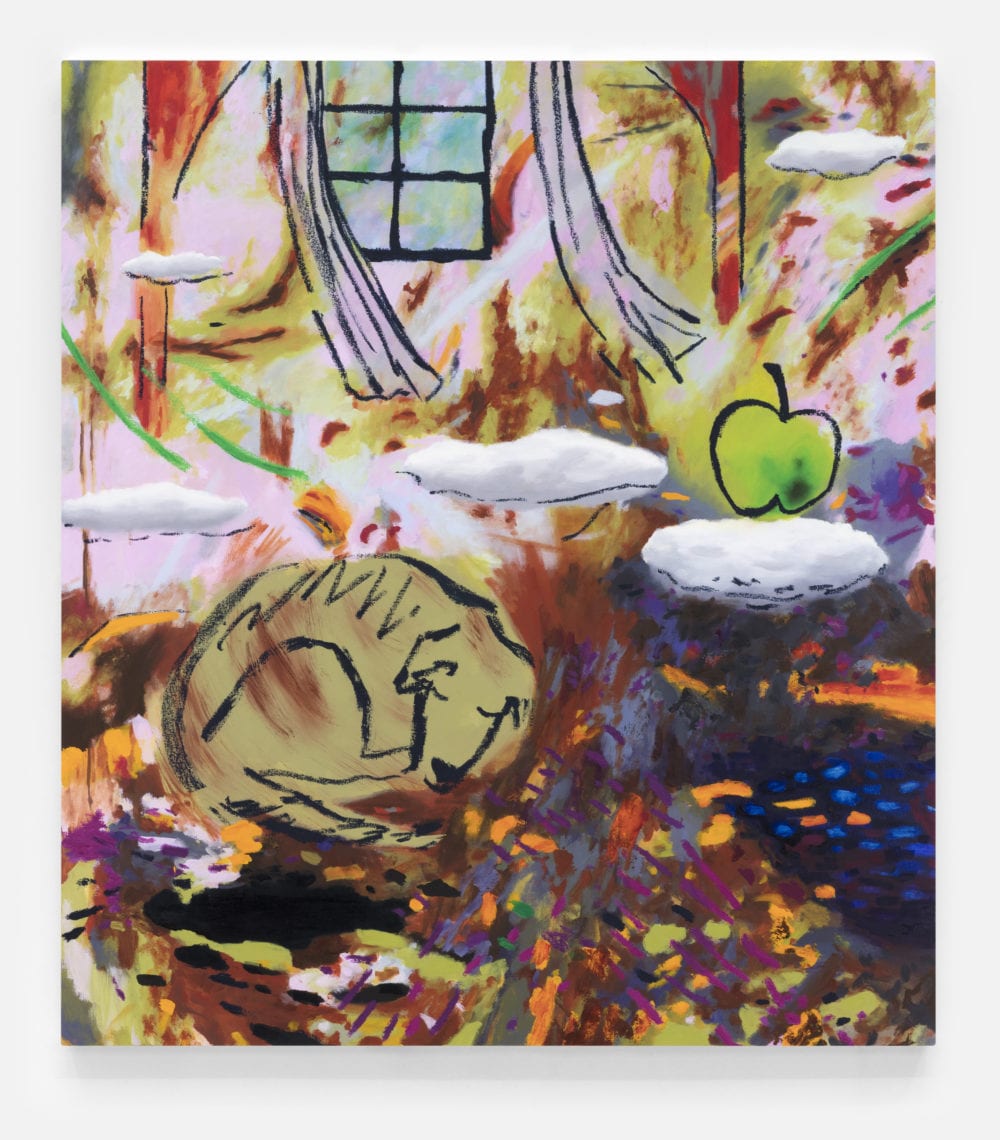 I’m going to take some time off and do close to nothing! After that I’m going to continue pushing this new way of working and see where it takes me. In the past few years I’ve been working at a furious pace but I’m much more of a tortoise than a hare. So, I’m looking forward to slowing down a little. I have a feeling this will allow the work to develop into something very strange. I want to try making some small sculptures and some new animations.

Various Small Fires is opening a space in Seoul and I’ll be doing a two person show there in July 2019. In December of 2019 I plan to do another two-person show with Rod Barton in London. And hopefully do some fairs and group shows along the ways.