Katherine Bradford uses paint as a means to communicate. Applying a build-up of material to the surface to create an uncanny but alluring beauty, Bradford’s paintings illuminate with familiar yet indescribable scenes. Representation and abstraction hold equal weight on Katherine Bradford’s canvases. Inspired by her time living in Maine, Bradford often depicts scenes both nautical and natural – swimmers, boats, and the night sky are a few motifs that have been repeatedly depicted, though her most recent body of work, shown at CANADA in 2018 featured a departure for Bradford in both form and subject matter. Here, Bradford discusses three of her recent works – their incarnation and evolution – as well as this moment in her career and her hopes for the future. 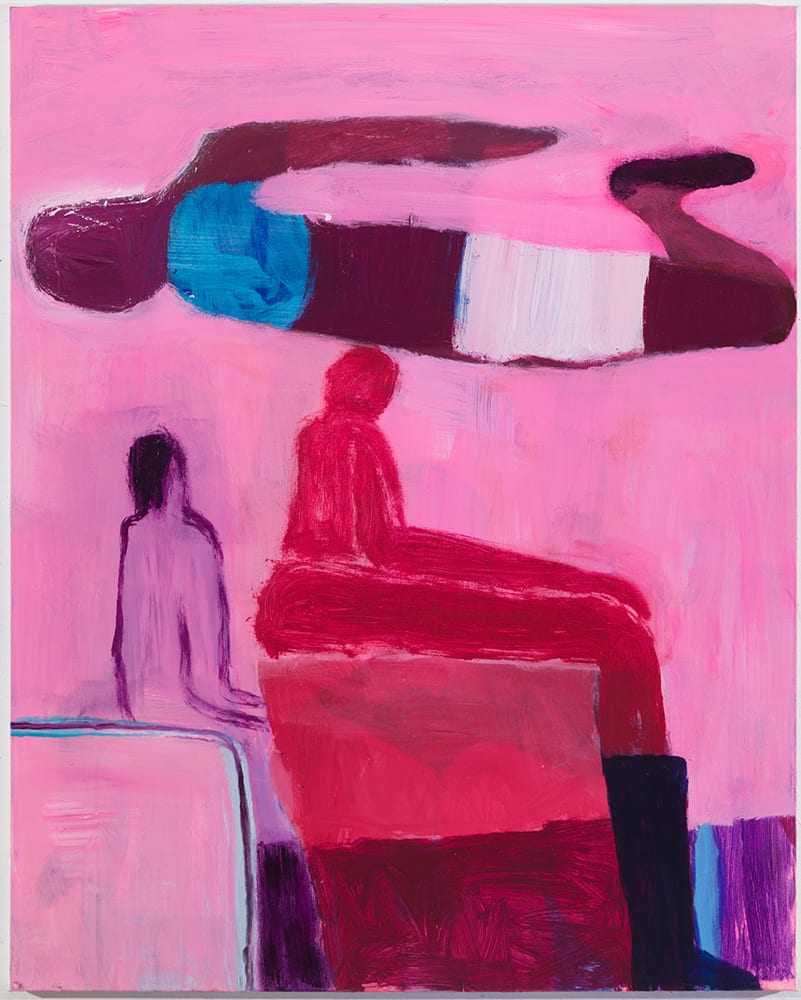 Olympiad, 2018
Courtesy of the artist and CANADA

Can you walk our readers through three of your works, “Olympiad”, “All of Us” and “Suits”? How did arrive at their at their similar color palette? Who are these figures? What do they represent?

Having just come through several years of doing paintings of people I was eager to move my “figuration” into more unexplored ways. The political issues of the times have been on everyone’s mind and although I didn’t want to respond to headlines or outright news I did feel the need to paint people who reflected in some way life in our present time. This and the feeling that painters desire to be in dialogue with other paintings and ideas from the history of art motivated these three works of art.

I think of the people in my paintings as “characters” the way a performance artist might create personages that represent various parts of themselves or different parts of humanity that they value. All three pieces show people floating in a horizontal position, an approach that interests me both as an alternative to the standard upright pose and as a way to “free” a figure and give them a kind of physical release from the ordinary.

When I was painting Olympiad I deliberately varied the color of the characters and gave them distinct sizes and clothing. Stepping back to look at the painting I saw that perhaps the top figure was some kind of athlete, here a logical explanation of his “flight,” and that the other two people could be seen as onlookers. The scene is an improbable one with the soaring figure grazing the top of the head of his onlooker but of the three paintings this one makes the most sense. I liked the abstract quality of the composition and the impromptu placement of bold colors. These three people were existing harmoniously together although they didn’t look alike. To me that was enough “subject matter” for a painting. 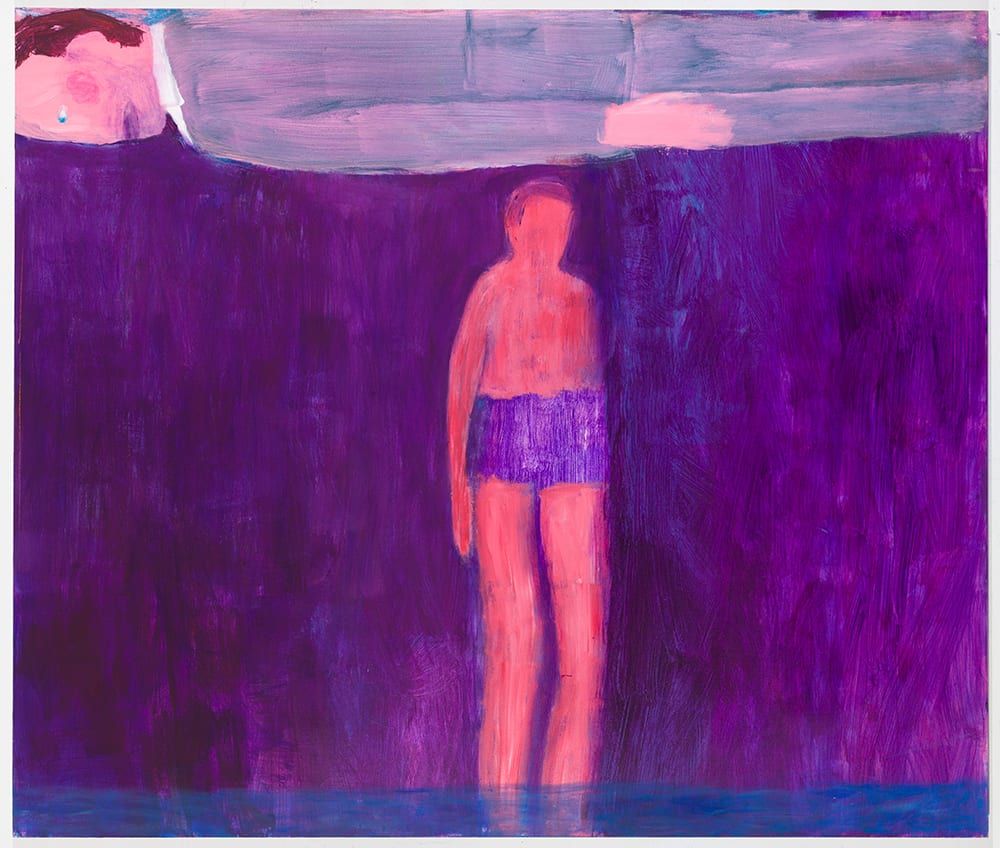 Suits, 2018
Courtesy of the artist and CANADA

“Suits” touches on an idea that I stumbled on in the process of painting it. Adding business suits to people helped to distinguish them from all the seminude bodies in my work, a condition I favor because it gets to a very basic pared down image of a human. The smaller man in a pair of small purple trunks began to appear slowly through wide brush strokes at the same time as the larger floating man in a suit above him became visible. (I’m sketching in the paintings so figures gradually “become visible.”) What interests me is the relationship between the two and again, how they can peacefully exist in a painting, in a rectangle. The visual back and forth between a man above another man dressed formally and a man who appears frail, exposed and vulnerable seemed full of a kind of tension that excited me. I actually want the viewer to start choosing between them or perhaps to feel a kind of empathy for both of them and to think about power relationships and how we define them. 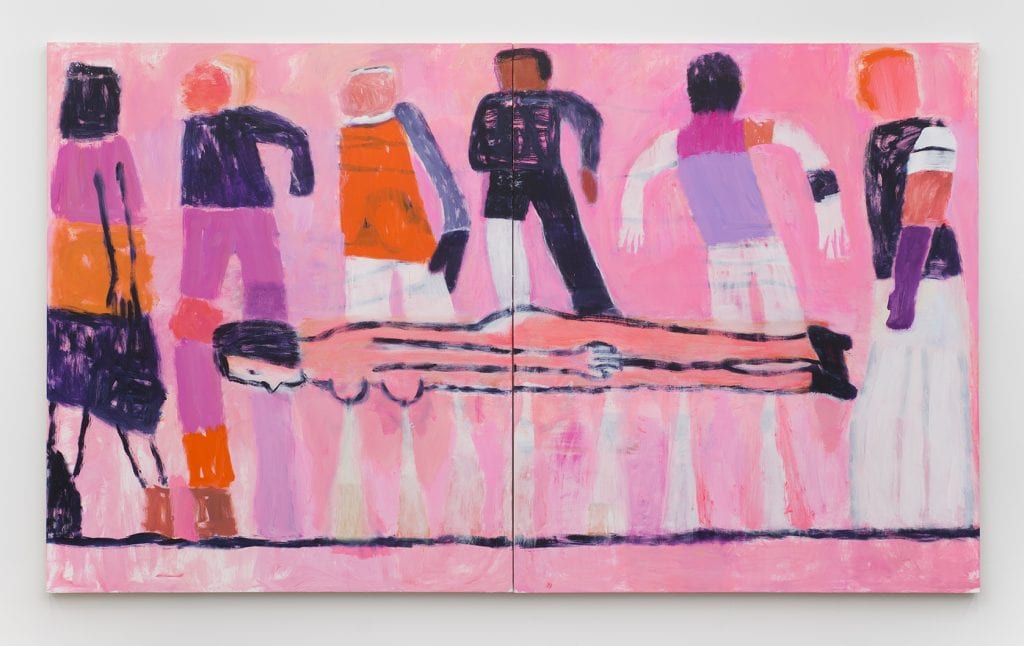 All of Us, 2018
Courtesy of the artist and CANADA

As for the third painting it is a diptych made up of two canvases side by side. I painted the whole surface different kinds of pink because, as I wrote above, this was my favored color at the time. The floating figure of a woman was sketched in first because my beginning approach to this painting was to make swimming or flying people travel horizontally across this long pink colored space. Visually this idea didn’t work for me; there was too much empty space so I added a lot of “chunks” of color that seemed to resonate with the pink: oranges, purples, dark purples that look like black and a creamy white. I remember rejoicing in the color I’d made in front of me. It was a dreamy kind of space now with every color I loved. Very quickly I filled in the spaces between the colored chunks to resemble people – rounder shapes at the top became heads and tube like shapes became arms and legs. This was so satisfying as I’d been searching for a way to present people who didn’t all dress the same or have the same skin color but nevertheless appeared to belong to a group. The horizontal woman was a left over from that first idea about flying, swimming people. I let her remain in the painting as I needed her to balance all the verticals behind her. At one point she had multiple breasts all along her body and each one was squirting a blast of white milk. Even to me that seemed a bit much so I edited down the breasts to a believable two but kept all the blasts of milk. They were important to give some kind of support to a naked woman calmly traveling through a painting in a horizontal position. The title of the painting is “All of Us” is perhaps a presumptuous label for a painting of just seven people but I felt a kind of triumph in creating a scene of characters where their origins, status and rank took second place to their visual similarities. Again, I’d created a scene of a group of people who were all not only existing together but they were also traveling together and hopefully getting somewhere. Viewers at my gallery show told me they felt the naked woman was being ignored but in the best of times she was going forward too, unencumbered. 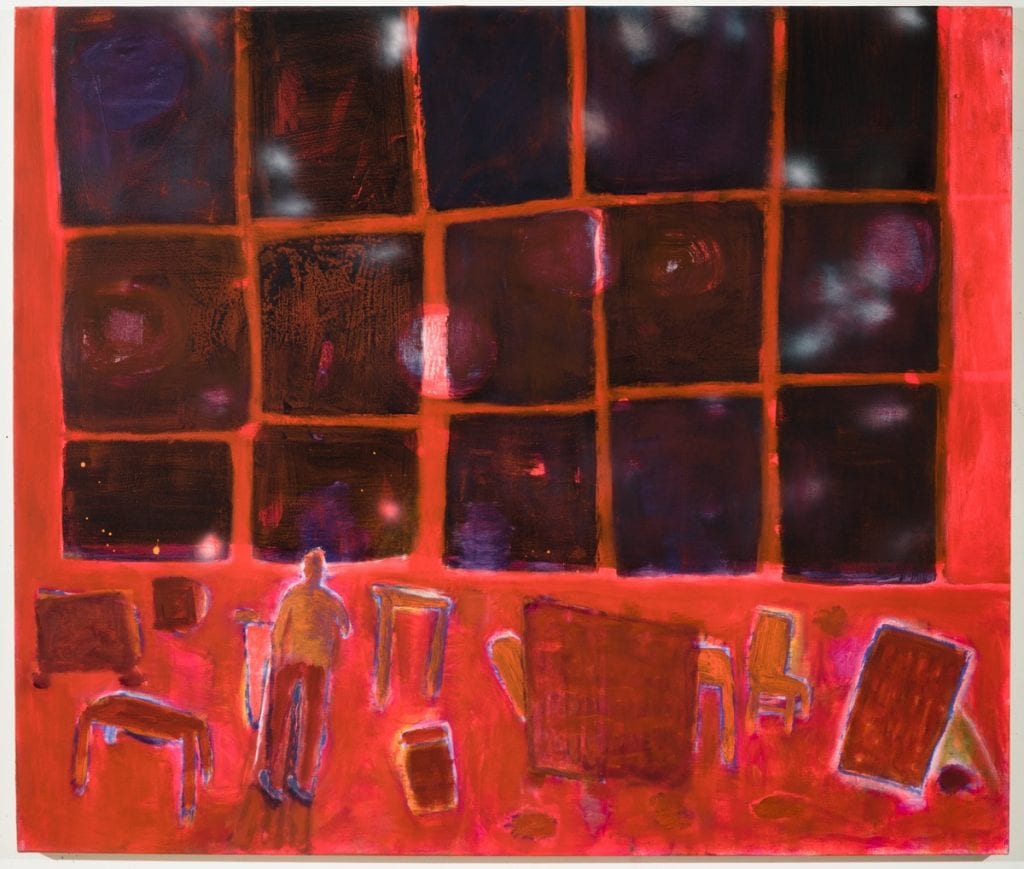 Red Studio Brooklyn, 2016
Courtesy of the artist and CANADA

Your paintings have taken the contemporary world by storm in recent years. How do you feel about the timing of this success?

The art world is relatively speaking a very tiny world and success within it doesn’t count for much outside its perimeters. I remember the many members of my family cowering in the corner of the big gallery space at my opening wondering what the Hell was going on – so many people embracing something that was so foreign to them. But you ask about timing. Believe it or not the whole time I’ve been an artist I’ve felt extremely excited by every small triumph along the way. My first solo show was at Corsican Pizza in Brunswick Maine where I lived at the time. It was a thrilling experience to me. Someone bought one of the pieces. She was a friend. I was overjoyed. Basically to have people understand you and embrace what you are doing is deeply satisfying at any level. 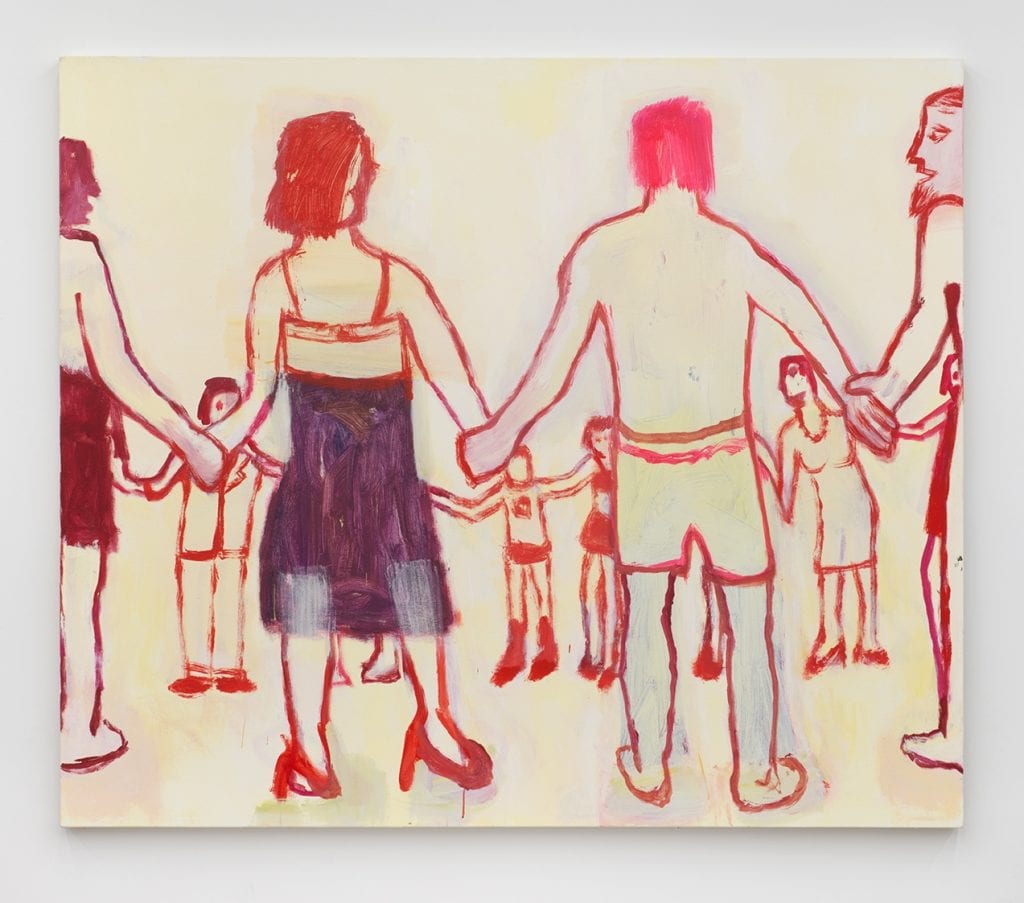 Wedding Circle, 2018
Courtesy of the artist and CANADA

How often do you paint?

Because I am now 77 years old, no longer teach a regular class and am no longer raising a family I can go to the studio every day, all day. It’s heaven. 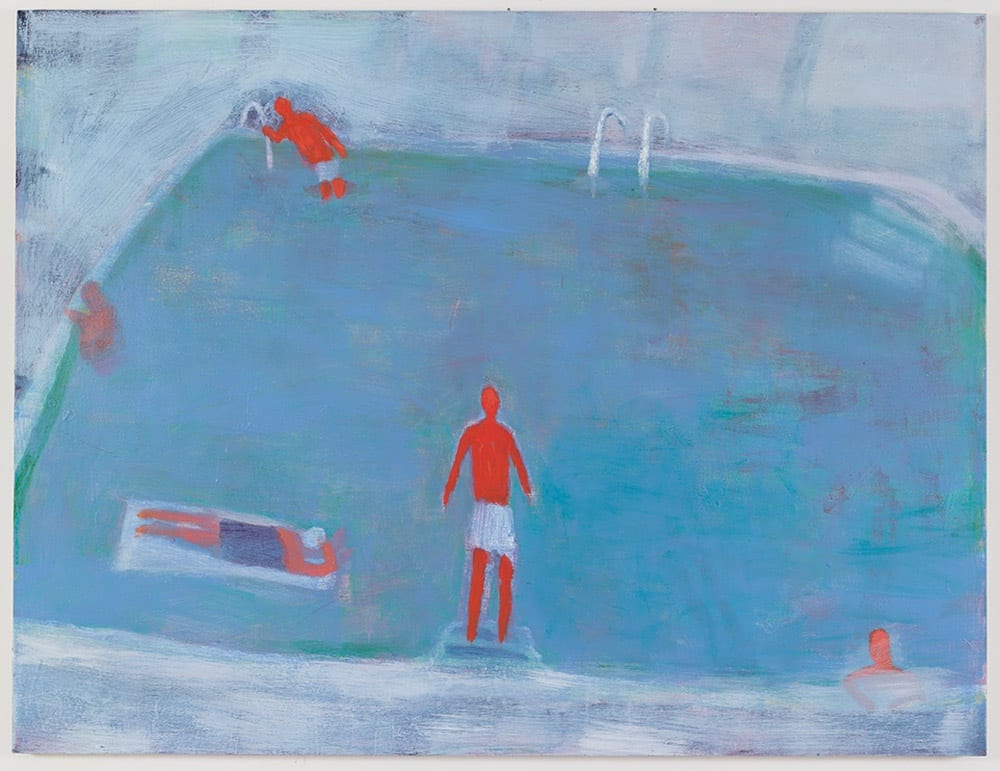 Winter Pool, 2016
Courtesy of the artist and CANADA

Do you approach your canvas with a plan in mind?

I don’t have a plan but I do have a “vocabulary” that I draw on and, as you have pointed out, I tend to favor certain colors.

Are there any particular goals that you want to accomplish at this phase in your career?

Sometimes when I look at certain paintings I say to myself “oh I wish I’d done that.” So, yes, I’d like to move my work forward – toward more freedom and a more distinctive approach. 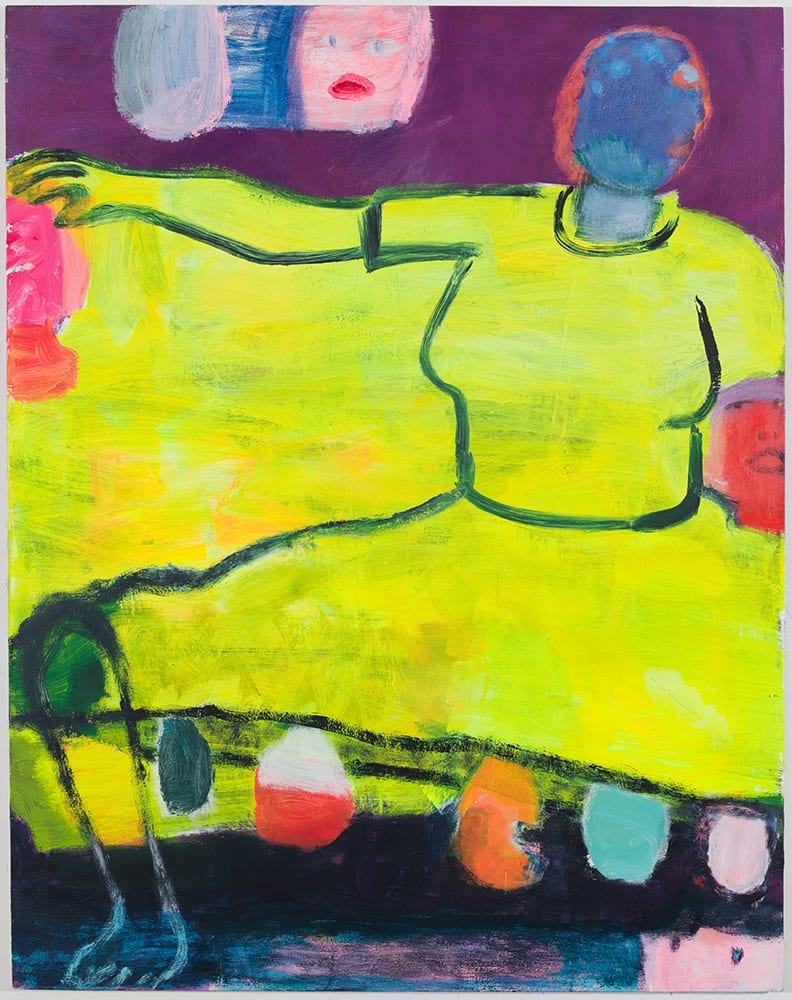 Yellow Dress,  2018
Courtesy of the artist and CANADA