Leonard Baby is a New York-based painter whose work deals with femininity, androgyny, identity, and feelings of otherness. These concepts are presented with light, primary color, and subject matter reminiscent of the sheltered and privileged world in which Baby was raised. Baby’s paintings are inspired primarily by European cinema, oftentimes alluding to the fact that they are just a moment of an entire story happening outside the frame.

Tell us a little bit about yourself. Where are you from originally and when did art first enter your life?
I grew up mostly in Colorado. I have four sisters who I’m very close to. I’m fortunate to have a mother who put me in art lessons at a very early age. She got me all the supplies I needed. She’d also get me books and VHS tapes about the Impressionists when I was around 5 years old. I feel very lucky for that.

Has your work always taken on the style it currently embodies?
Since high school my work has been described to me as “quiet” and “pensive,” so I think it’s always been the same at its core. Although, to me, my work feels vastly different from one week to the next. Stylistically, I’ve always felt very informed by Munch and Van Gogh. Munch’s work is always in the back of my mind while I paint. I’ve always worked with figuration in one way or another. I used to draw a lot more, but now I almost exclusively paint.

What’s a day in the studio like for you?
My studio is in my apartment, so studio time is dispersed throughout my entire day. I typically wake up, make some tea and sketch a bit. Then I’ll take my dog for a walk, and then paint all afternoon. Then I’ll try to accomplish some chores and make dinner. Most nights I will go back in my studio until about 1AM. I’m currently in a place where I feel like there aren’t enough hours in the day to paint.

What’s next for you?
Right now, I’m mostly just painting and selling through Instagram, although, I’ve got a few shows coming up. There’s a group show at Pamela Salisbury Gallery in Hudson in December that I’m very excited about. 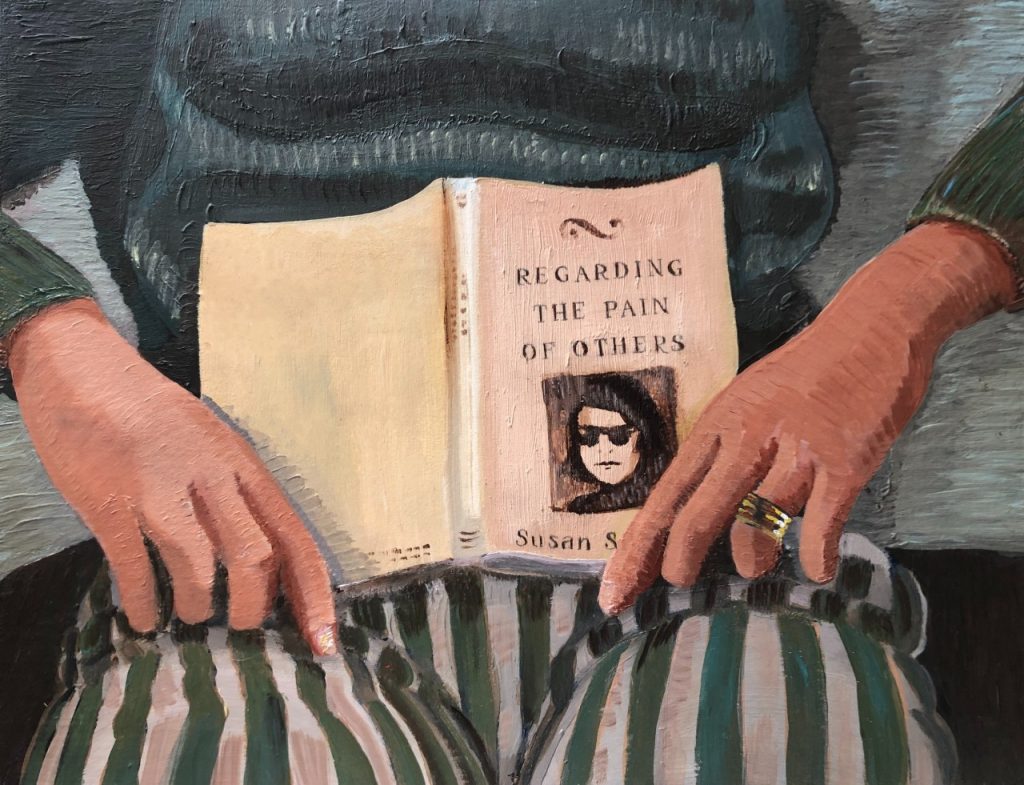 From where do you draw inspiration?
As I’ve mentioned, I draw a lot of inspiration stylistically from the impressionists, post-impressionists and realists. The majority of my subject matter is appropriated from mid-century European cinema. I watch a lot of movies on the weekends, which started out as leisure and has since turned into research. I’ll see a scene or a frame I like that demands to be painted. I can’t quite sit still until I’ve reiterated it with paint. Though it is the subject matter I’m reiterating, there’s something about the atmosphere in these mid-century technicolor films that’s not like anything else and something I really hope to capture.

Have you always painted in the style your work currently inhabits?
I’ve always painted representationally and I think my palette has stayed pretty consistent. I’m trying to push myself into oil painting more, but at the moment I’m pretty comfortable with my acrylics. I’ve been too impatience for oils, so I’m working on that.

What source material do you base your work off of?
Film is the primary source of my subject matter. The composition and coloring of these French and Italian films from the 1950s, 60s, and 70s can be so beautiful, sometimes painfully so. For instance, a given film may depict a dinner table that you see for a split second as the camera pans to the main event, but it is composed in a way that is so rich it just demands to be painted. In a way, I see it as my responsibility to further solidify their beauty through painting. I think the way I consume, collect, and reprocess media is heavily informed by the internet, Tumblr specifically. I spent hours on that site in high school, hoarding images for a blog no one ever really saw. But it trained my brain in a way that directly informs my artistic process today.

Does your work reference any Art Historical movements?
Other than a style that emulates the impressionists or pop artists, my work doesn’t have any explicit art historical reference. However, the films I draw from are oftentimes dripping with art historical references themselves, so in that way, it’s baked into the work. Cinema at its genesis was heavily informed by fine art and art history, and still is today. Funnily though, a lot of painting I see today is heavily informed by cinema. It’s fascinating for me to see the two lending and borrowing to enhance the other and give it a new level of meaning. 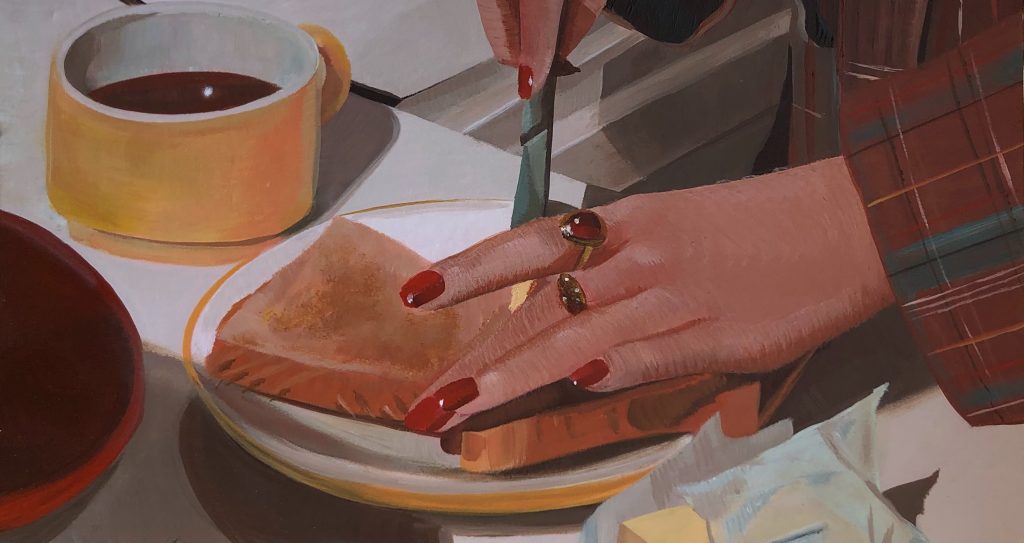 What is your process like? How do you begin a work?
I watch the scene I’m depicting several times over. Then I’ll sketch it out. Sometimes the actual sketch is what I adhere to wood-panel and paint on top of.

At the end of every interview, we like to ask the artist to recommend a friend whose work you love for us to interview next. Who would you suggest?
Caroline Zurmely. She’s the best. 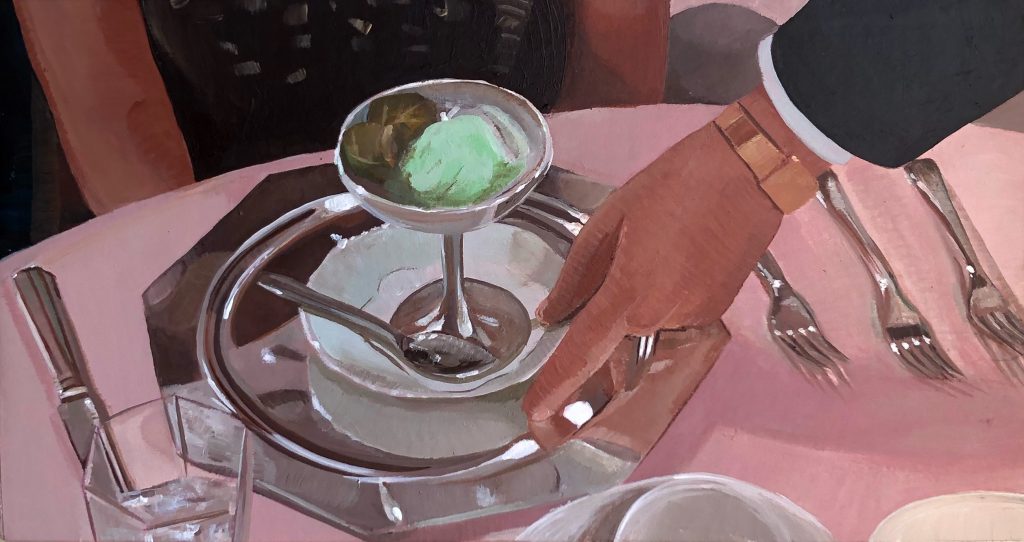