Matt Kleberg Sets a Scene on the Painting Stage

Matt Kleberg creates architecturally inspired works that test the boundaries of a canvas. Drawing inspiration from his day-to-day surroundings, Kleberg sketches geometric shapes, bold lines, and color, that create scenes with depths and stories to them. Kleberg’s paintings ask the viewer to both consider what is in front of them, as well as what’s absent in the space. Kleberg lives and works in Brooklyn, NY.

Your work pulls inspiration from a wide-range of sources: architecture you see around your neighborhood, Sienese painting, your son’s children’s books. How do all of these elements combine and take life on the canvas?

It’s true, the paintings come together like a stew- any ingredient is fair game. It can be some architectural element I walk by, something seen in a book, something borrowed from another work of my own, whatever. Just the other day I found a bit of food packaging in a trash heap down the street with these really nice wavy lines, so I picked it up and it’s currently pinned to my studio wall.

How much of your work is pre-planned vs. intuitive?

I make lots of small black and white drawings, often the same general motif reiterated over and over with only slight variations. If one iteration finally “clicks”, I’ll move to a larger canvas and make a painting. The drawings then help plan out the overall composition or scaffolding for a painting, but the color decisions happen in real time and never really comply with any plan. So I guess it’s a little bit of both – pre-planning and gut moves. Lately it seems like everything in the studio has been repainted five times, so that might explain how well things go according to plan.

Have you always been interested in exploring the boundaries of geometric scenes?

Not at all. My work came out of a painterly figurative background. In the first part of grad school I was making wonky figure paintings that tried to channel Marsden Hartley, David Bates, David Park, etc. Before moving to NYC I joked that the city would turn me into a geometric abstract painter – that seemed to be the furthest thing from my interests at the time. That said, the work is always shifting and evolving, and when my figurative subjects started to feel interchangeable or nonessential, they were painted out. What was left was that space formerly occupied by the figure, and my interest shifted to framing or staging that space. That’s where the stripes and architectonics became more central to the work. I can’t say whether the same evolution would have happened somewhere else, but I am sure being in New York and surrounded by architecture contributed.

Your works draw the viewer in and almost appear like portals into another world. What is your intention behind this play with depth and perception?

I read a lot of Southern Gothic literature, and in a lot of that work the present is haunted by the past, the characters and plots animated as much by who or what is NOT present than by what is. Absence looms larger than presence. That resonates with me and I think what’s at stake with each painting is the challenge to activate these more or less empty spaces. I get excited about a painting when the space begins to contradict itself.

You have quite the collection of oil sticks in your studio. Why do you prefer this particular painting technique?

The oil sticks feel closer to drawing than a brush, and that feels better for the work right now.

What other working artists keep you inspired?

This could be a long list. Right this moment? Michael Berryhill, Patricia Treib, Julia Rommel, Matt Phillips, Rose Wylie, Daniel Rios Rodriguez, Erin O’Keefe, Eleanor Ray, David X Levine, Holly Coulis, and a ton of others. Thornton Willis is a personal hero – he’s still going strong after all these years. Some of the paintings in the Charline von Heyl show at Petzel killed me. I could keep going but I’ll spare you. 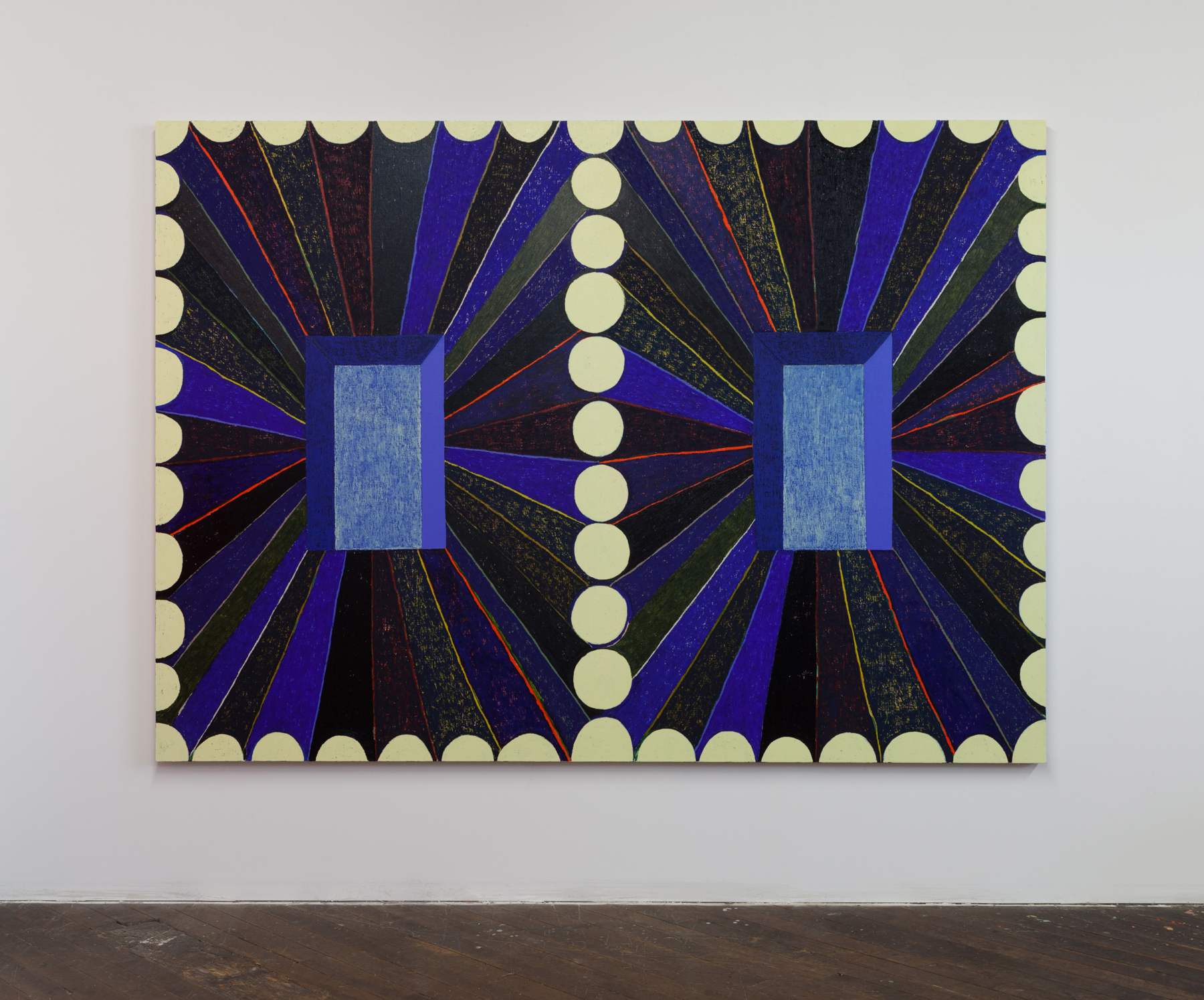 You have many friends also working in the New York art scene. What’s the best part of being a part of a community of fellow artists?

Truth be told, we don’t see each other as much as we’d like but it is nice to have peers who are seeing the same stuff, ingesting the same air and trying to make work that deserves to be a part of a larger conversation. I have a 15-month-old son, so I don’t get to openings like I used to, so it takes effort to grab a beer to go see art with a friend. I don’t know, New York is a hustle and I guess it’s comforting to have kind people around you that are making it work without becoming monsters.

I’m working on a few funky site-specific projects right now. One is a fireplace surround that I’m really excited about, this multi-panel floor to ceiling painting that really becomes a part of the architecture. The central space that might be a niche or other recess in a more typical painting is the actual fireplace, which I get to refinish with colored tile. Another project is a ceiling that feels pretty intimidating at the moment. Coming up, I have shows in San Antonio, Richmond, and maybe Oakland.

What am I really excited about? My wife and I just finished watching Manic on Netflix and I loved the way they used color. That was exciting. I just prepped a bunch of big canvases in the studio and that always pumps me up. 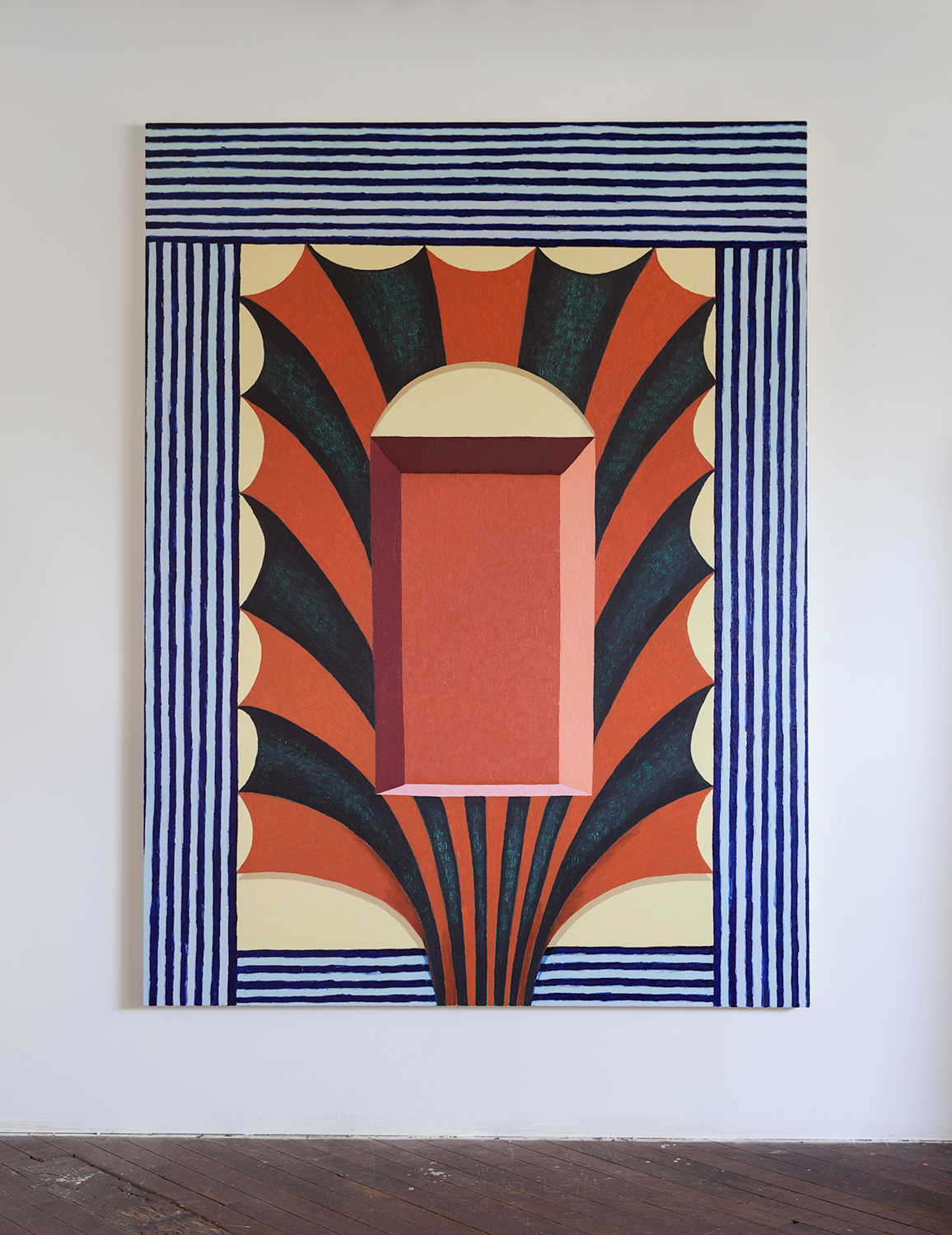