Between animating his collages for Soulja Boy and having his artwork featured in an upcoming film, Matthew Sherman is proving himself a force with which to be reckoned.  Bouncing from a freelance graphic designer to a digital content manager to a resident artist at a music production company, he is nearly unstoppable. His breadth of knowledge regarding 2D art extends further than graphic design into photography and video as well. Graduating from Hamilton College in 2013, he found inspiration in the historical implications of art in 20th century social constructs – something he explores more deeply today. By using collage to examine these structures, Sherman is able to create his own reality, one that don’t necessarily fit our traditional mold.

I was born in Brooklyn and grew up on Long Island. My dad was an artist—he worked a lot in collage and mixed media, but as I understand it he was also one of the first people really working in the digital art sphere, especially in 3D design and texture.

Some of my earliest art-related memories were spending time with him in his studio on his computer building 3D figures in a modeling program called Poser, then compositing them into 3D landscapes built in a program called Bryce. I’m not exactly sure why, but I spent the majority of my childhood pursuing other things. In college I began to teach myself graphic design, and took to it very quickly. I essentially became the only graphic designer on campus and ended up experimenting a ton and getting a lot of work while I was still in school. When I graduated, I started working as a graphic designer in New York, and shortly after my dad passed away. That was the point that art re-entered my life in a serious way. I inherited his camera, and a massive collection of printed material, studio supplies and artwork, all of which I continue to use to feel closer to him and to better understand what he was doing. 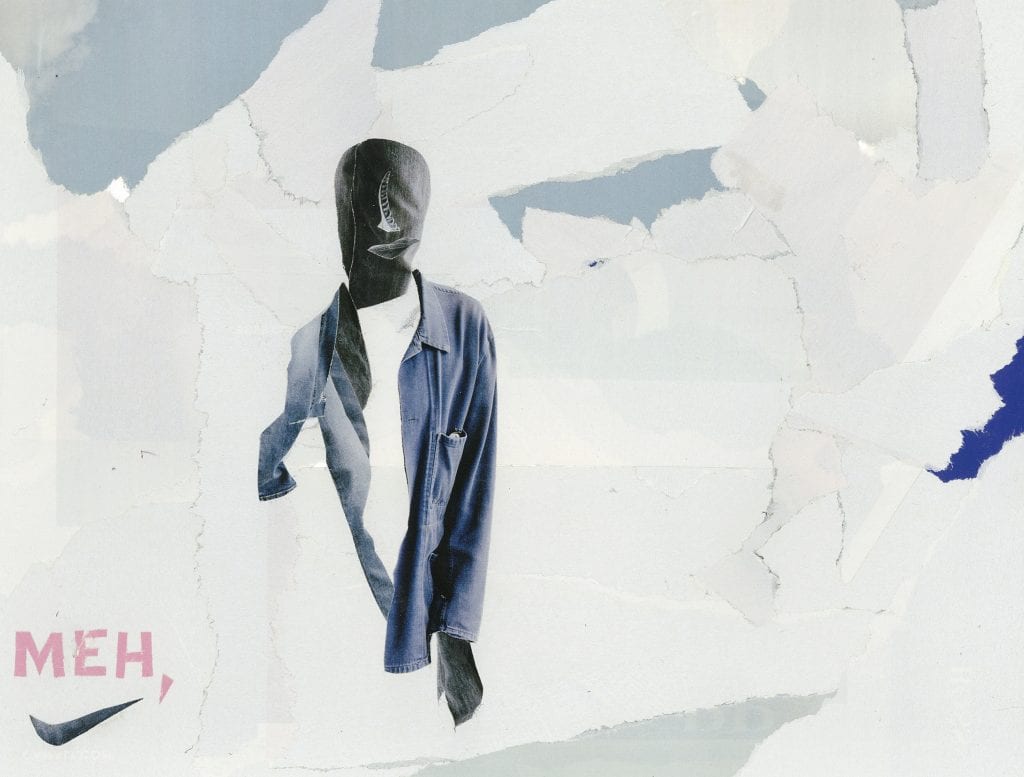 My style has always been collage, but I think that word has really taken on a different meaning in popular culture, one that’s adjacent to—but separate from—what I’m doing now, which I see more as painting with paper. It has been a long road of working hard, screwing up constantly, and recycling failed projects into new ideas in the endless pursuit of creating what I see as a really unique style. Rarely will I use a large enough piece of any source material significantly intact in its original form or orientation that it would be recognizable to a viewer, and that is something that has been a constant in my work in the last couple of years. The definitive change has been a conceptual one. The previous goal, which was to create a final image or experience that successfully translated both a concept and a feeling to a viewer, has started to transition. Now, I’m trying to blend the concept of the work into the process and the materials themselves. 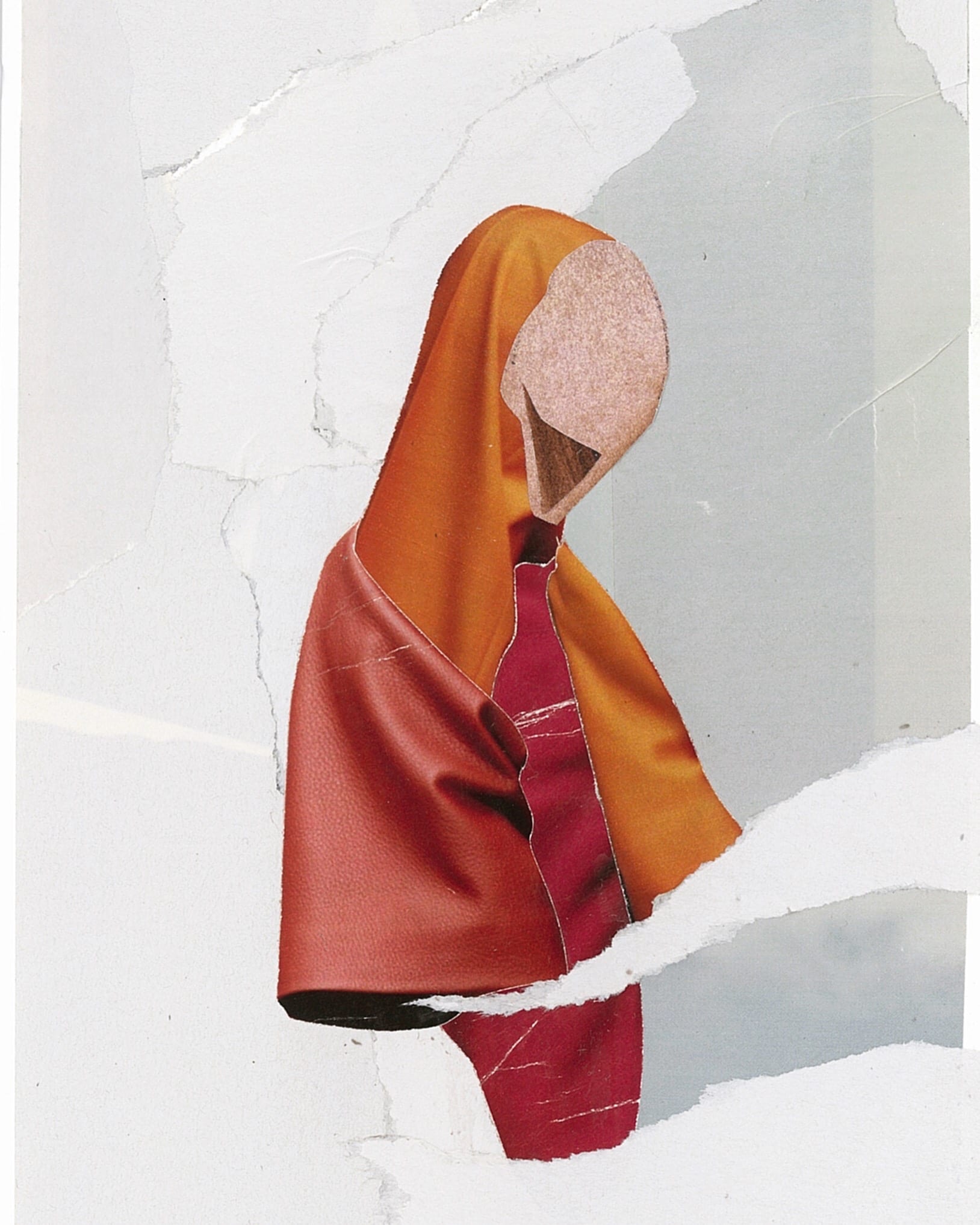 I work full time doing design and studio photography, and I have an in-home studio in my apartment in Brooklyn with a large drafting table that I work on. Every night I spend time in there in some capacity when I get home, either working on larger pieces, or going through archives of paper, books, and magazines to select material that I want to use and laying it out for whatever piece I’m creating at the time. Throughout the day I do small sketches and studies, which I bring home and expand into finished pieces. 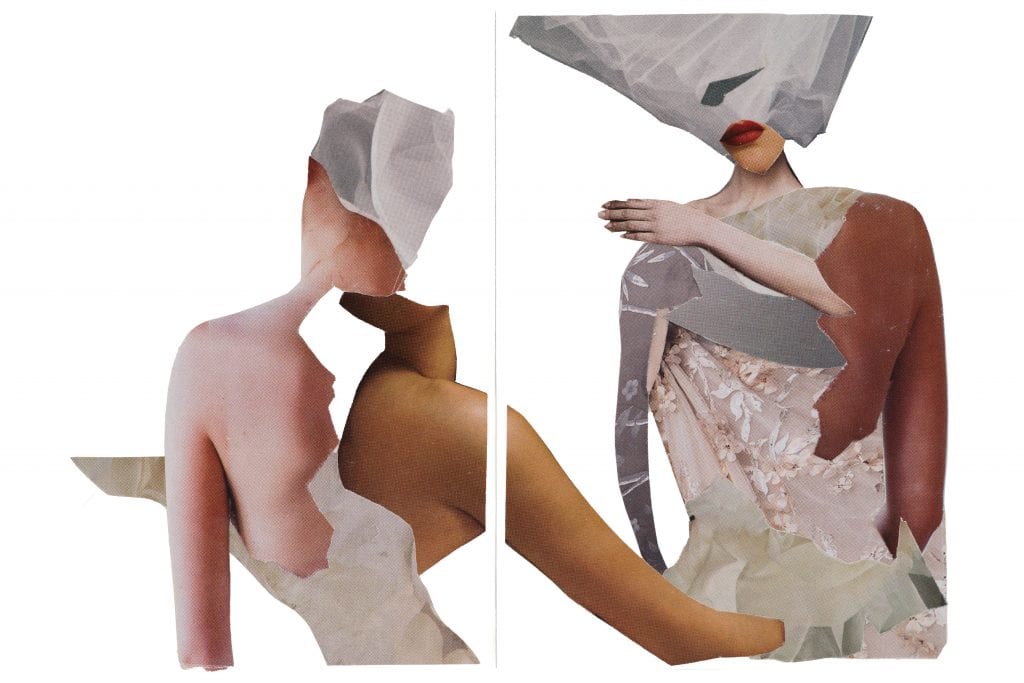 I feel really inspired thinking about, and watching, the way that we—human beings—place value on cultural space in the physical world. We print, post, and distribute culture in real time, manifested into so many forms, and then let it waste away as it transitions into history. That process of aging in cultural space and depreciating in cultural value over time is what I find so stimulating creatively, and what ultimately becomes my source material—the paper, plastic, and other materials on which it is created, experienced, and on which it slowly decays. It all takes place within both a literal and theoretical frame of our own collective definition. I love the idea of recycling the space within the frame to assign it a new importance and identity adjacent to its original commercial consumer context. Also, I have to mention the city. New York is one of the most chaotic and interesting places on earth. I don’t know if it’s the city itself or my own personal lens but light seems to hit everything—people, places, things—differently here, like the whole city is just covered in something. Whatever that something is, it’s special. 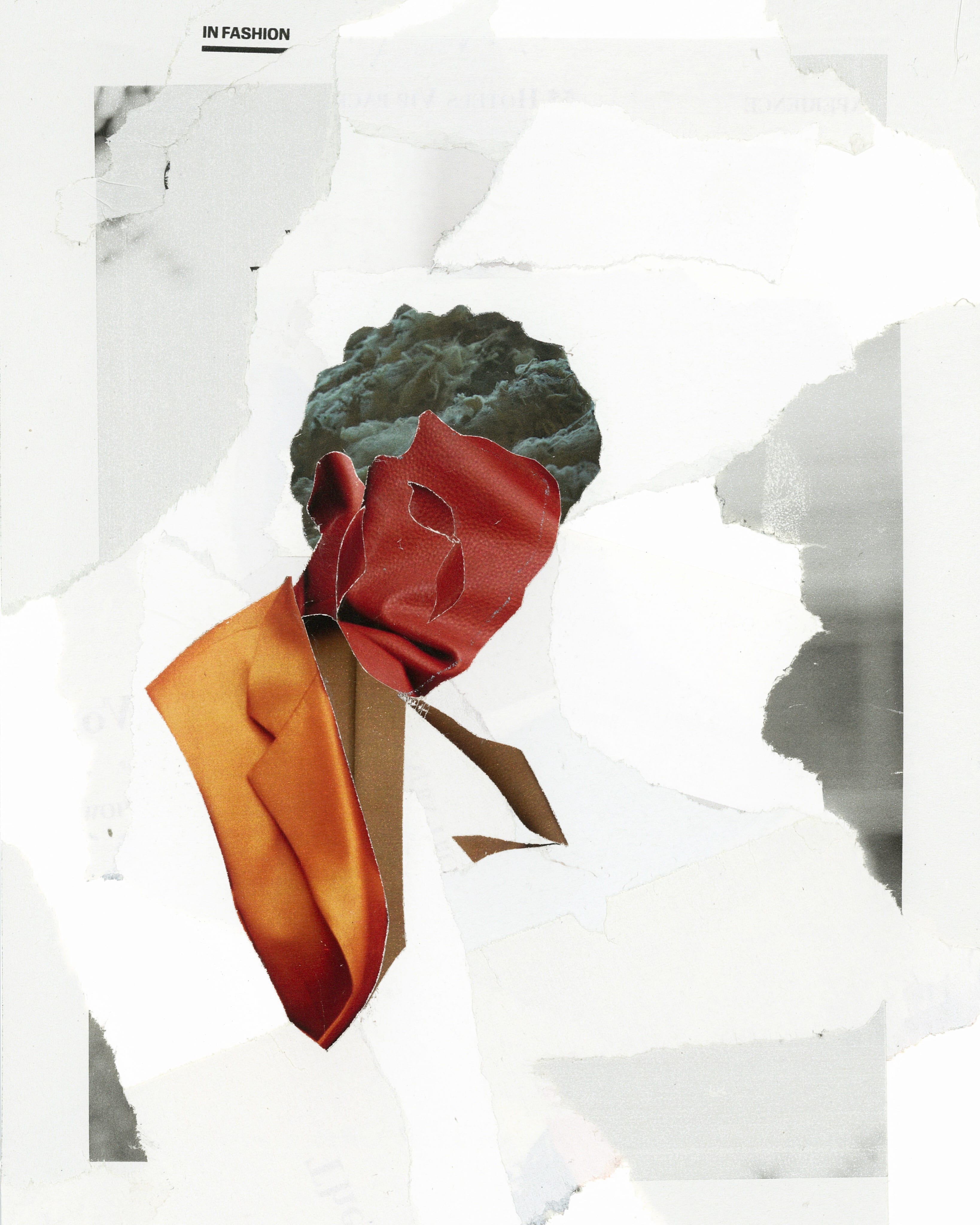 Initially I used a lot of small, precisely cut pieces to create detailed, vivd landscapes and figures. Lately, in considering the framing and valuing of cultural space, my work and my process have become much less rigid and literal, both with the individual pieces that I’m using to create environments and figures, and with the overall pieces themselves. I’m becoming increasingly liberal with the way I treat the material itself, doing significantly more tearing, versus cutting and slicing, while at the same time becoming much more focused in on the importance of what material I’m selecting and including. The way that paper ages, how its color and texture change with time, and how we change it over time are becoming a main focus. With regard to the material it is affecting, I’m effectively thinking about time as a gradient. 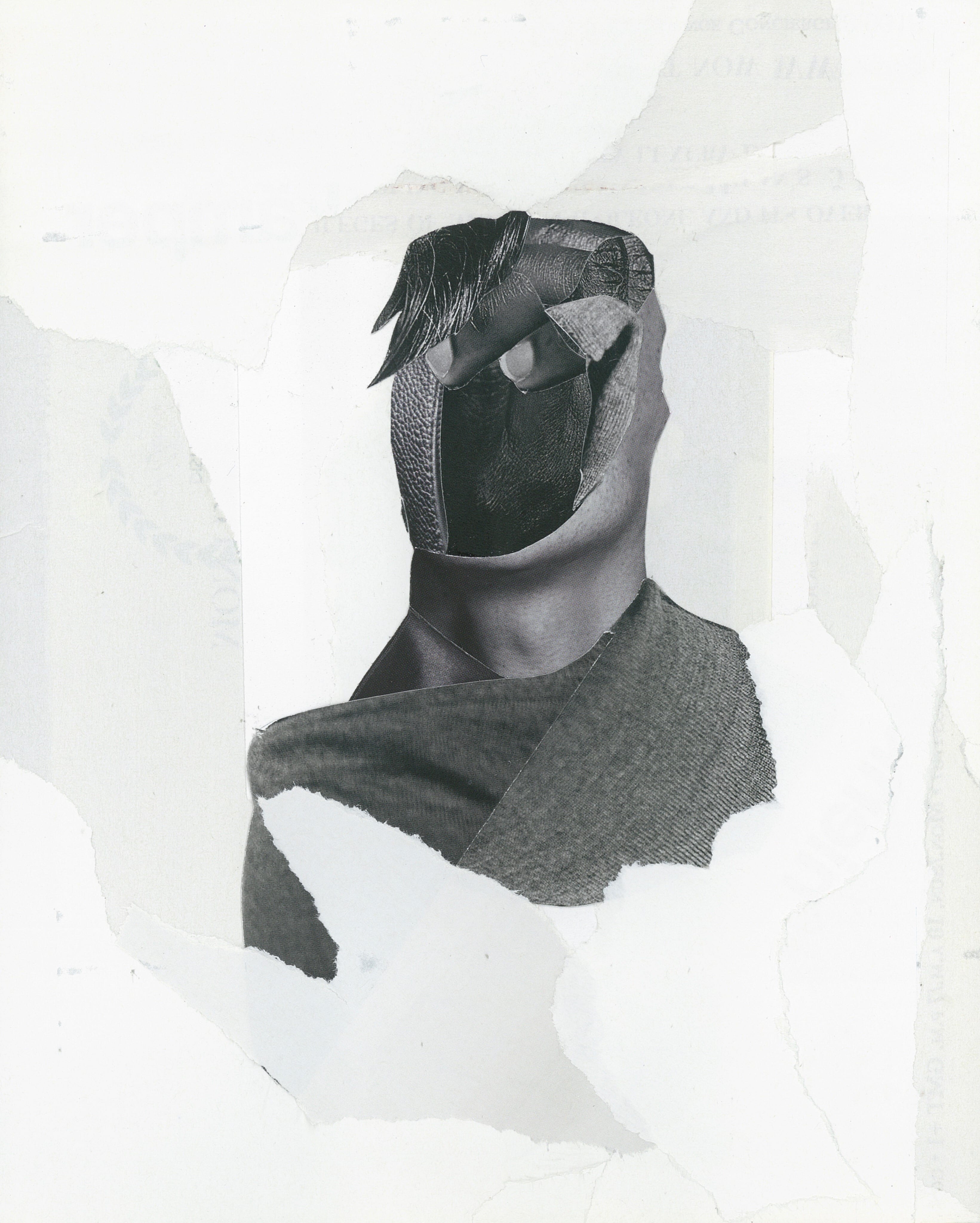 I began making work about retouching, using predominately retouched images—whether they be skin, fabric, nature, etc—everything we see in culture is retouched. It is something I became very good at doing while working as a designer and photographer at a large company, but something I began to heavily resent as well. I continue to use a lot of retouched skin and fabric, as well as other materials like plastic takeout bags, in my own way un-retouching the images into figures that take these false ideals of perfection that surround us in culture, and turn them into something often grossly imperfect, but perhaps a little bit closer to reality. Now I’m focusing in on the idea of recycling printed white space. In a way, everything and anything is fair game for me. I’m using the material that is used to frame and contextualize everything that is printed anywhere. Our entire cultural and historical record is essentially framed in white space that is created and allocated to be ignored. I’m recycling it into something new—something with its own value. 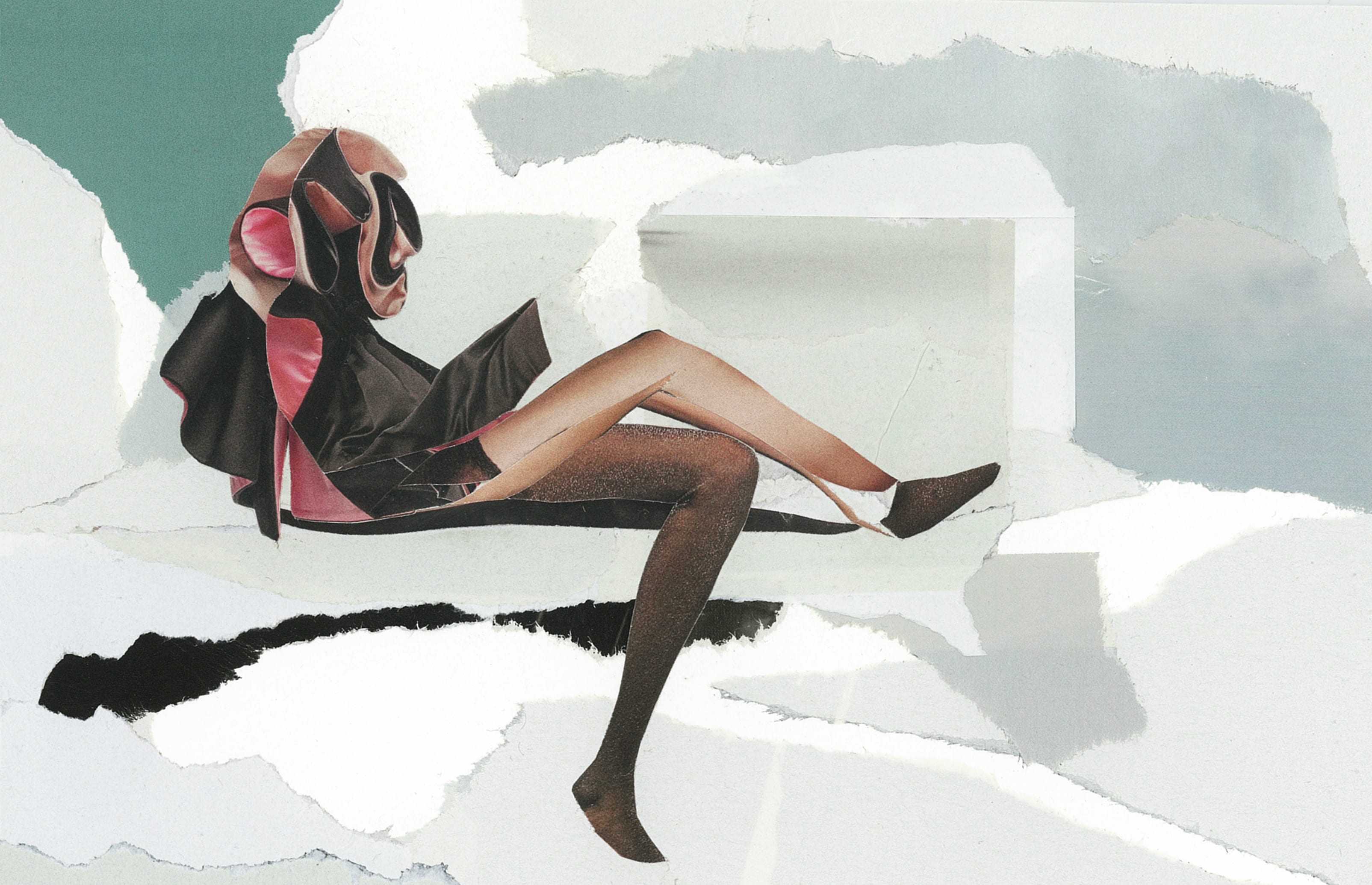 Everything begins with paper. I start looking through the drawers of my flat file, or through books or magazines on my shelves, and pick a specific shade or age of white or off-white paper to begin with. Whenever I look through a magazine and see a page with 90% white space used only to contextualize something like a Saint Laurent logo in the center I can’t but think about the value of all of that space. Those pages cost so much, and so much is left blank—just used as a means of featuring something else within the frame. In the same way people feel the need to recycle plastic, I feel the need to reuse the white space, to give it use beyond its current life. I like the way my work looks when it has significant negative space and minimal environmental features, but I don’t like the complete lack of texture that comes with a blank white canvas. Thats why the first layer of repurposed white space became like a gesso to me. It is a first coating, made using material that would otherwise waste away to create a look and a texture that gives the piece life—as if built over time via an industrial and natural weathering. Subsequent layers of recycled white space of different shades or ages build up texture, and create discernible features of an environment. I also mix different elements into the glues that I’m using to help shape the texture. Depending on the piece I might include a figure or I might not. Sometimes I’m inspired to create a piece around a figure or character, and sometimes the environment is the piece by itself. When I do build a figure I spend a lot of time looking through images of retouched skin and fabric to find small pieces that I can combine and layer to form what I’m imagining. 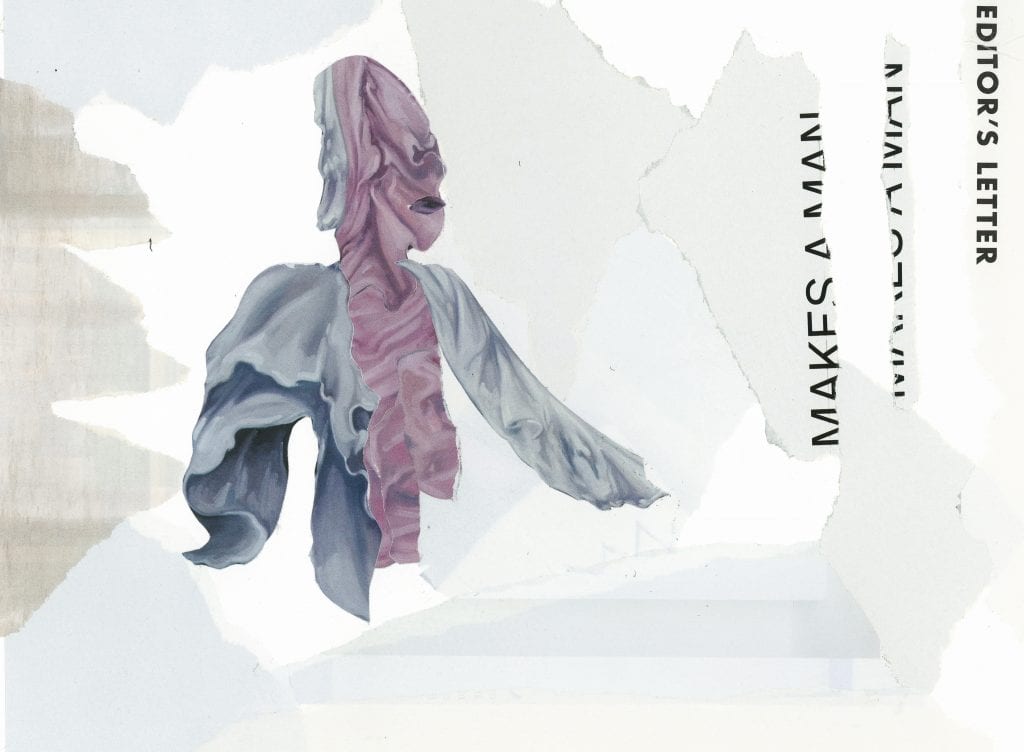 Rather than Art Historical Movements, I find that I identify more specifically with certain artists whose work influenced me heavily, and who I tend to actively and passively reference in my practice. Romare Bearden is one of my absolute favorites. He probably had the greatest influence of anyone on my dad’s work, so his collages were ever-present in my life since childhood. So many things about his work speak to me, but the way he uses hands on his figures—introducing them via negative space in this oversized manner to jut into the narrative of the piece—I love it so much, and it is something I have absolutely paid homage to. I just saw an installation of his work at the High Museum in Atlanta and couldn’t look away from all of the hands. Looking at Andreas Gursky’s photography helped me see how color and texture can become a subject, and people, places, and things can form a texture, and that total chaos can appear serene if captured within an even framework from a perfect perspective. Irving Penn’s fashion and portrait photography have had a big influence as well—I try to reference the style in which he was able to transform fabric into these sharp but elegant figures. 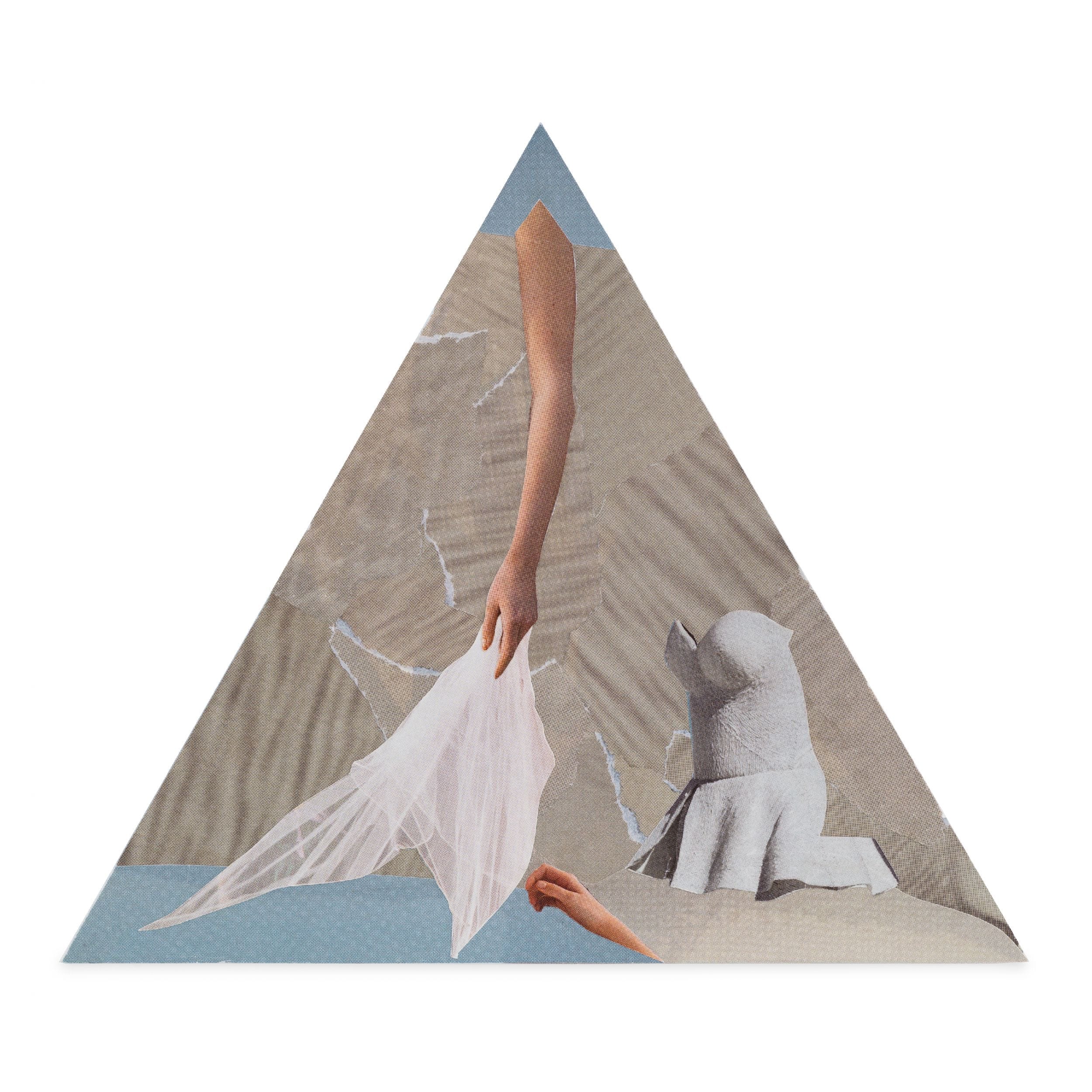 My main focus is continuing to scale up the size of my work, and looking to exhibit in galleries. I’m also really interested in working with non-traditional canvas shapes and orientations to transform my work from something to be seen on a wall into something that alters our experience interpreting spaces that would otherwise be traditional. I think people tend to see certain spaces in both galleries and homes as being off limits for displaying work, and I would like to play with those spaces by creating work meant to be shown there, be it around a corner or surrounding a light switch, for example. 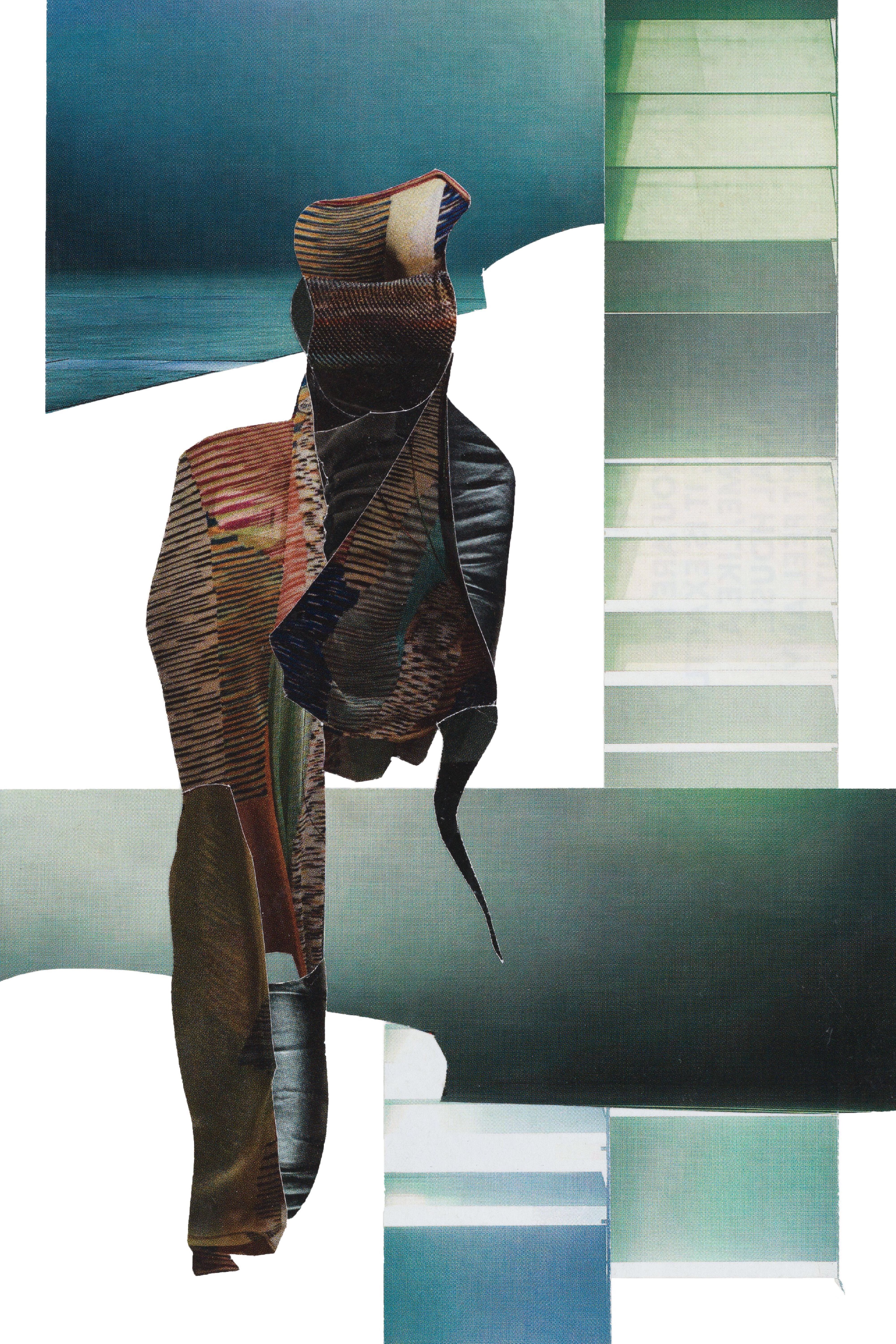 Paul Esposito is an amazing individual creating work unlike anything I’ve really seen. He’s based in LA now and has a really diverse practice aimed at the intersection of Humanity and Nature, and what defines and divides them. Please, check out his work! 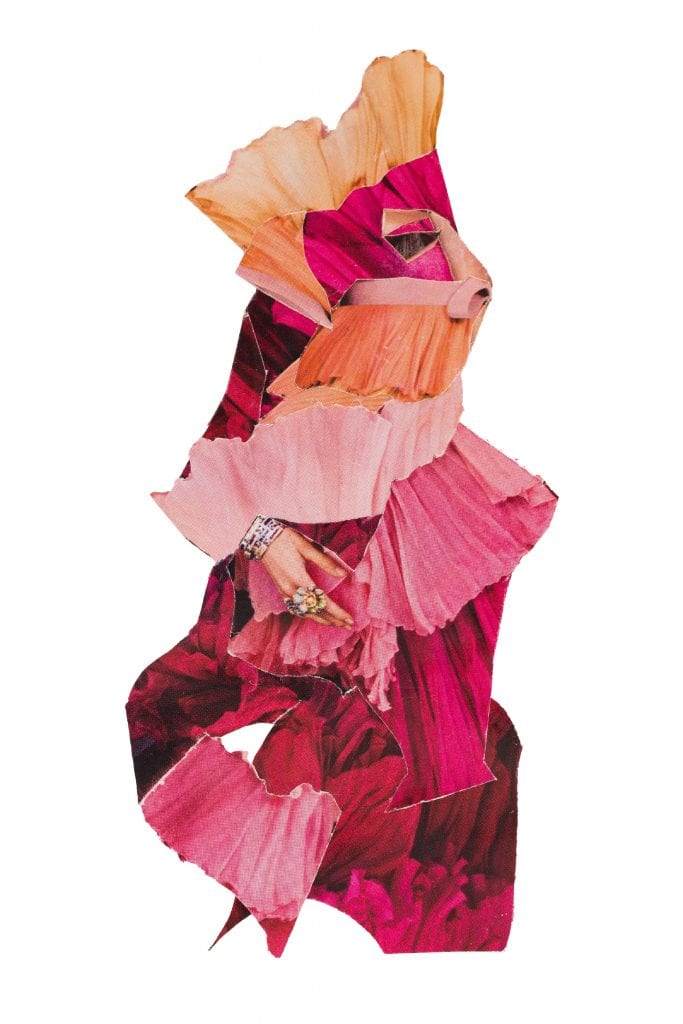