Matthew Wong Reflects on the Melancholy of Life

Matthew Wong paints with distinctly singular brushstrokes that call to mind Modern masters such as Vincent Van Gogh and Edvard Munch. He creates psychologically-charged scenes, that although recognizable, possess an essence of uncanny. Wong’s range of color and mark-making originate from moments of daydreaming. He often portrays a small, solitary figure to reflect on the inherent loneliness of contemporary life. Wong lives and works in Edmonton, Canada.

Tell us a little about yourself. Where are you from originally and when did art first enter your life?

I was born in Toronto, Canada and grew up in Hong Kong. Art first appeared in the picture in my late 20s towards the end of the 2000s. I had graduated from the University of Michigan with a BA in Cultural Anthropology and spent about two years working a variety of office jobs, but nothing really seemed like a viable pursuit for the long haul and I was losing passion and motivation in life. During a lull in employment I found myself beginning to take photos with my cell phone, street signs and found geometric arrangements out in the urban environment, things like that. Shortly after, I decided to enroll in the City University of Hong Kong’s School of Creative Media for an MFA in an attempt to acquire better technical training for photography. My first memorable encounter with painting was in 2011, when I was an intern for the Hong Kong pavilion of the Venice Biennale that year. Coming across works by two artists in particular caused a radical shift in my thinking – the Julian Schnabel retrospective at the Museo Correr, and a series of 8 large Christopher Wool silk screened Rorschach blots in the main pavilion. It hasn’t occurred to me that painting could take these forms beyond realistic depiction, and I had a newfound curiosity to read and find out more about the evolution of painting over the past century. I finally began to paint and draw earnestly in 2013, using the local library and the internet as my tools for self-education in the medium.

Which artists most influence your work?

Too many influences to fully list here, as I am a bit of an omnivore for sights, sounds and ideas and am always on the lookout for perspectives I had not considered before. But to name a few artists whose lives and work I think about often and keep going back to: Edvard Munch, Shitao, Xu Wei, Lee Lozano, Vincent Van Gogh, Eleanor Ray, Andrei Tarkovsky, Brenda Goodman, Lois Dodd, Alex Katz, Kanye West, Louise Bourgeois, On Kawara, Yayoi Kusama, Scott Kahn, and Marsden Hartley, among others. 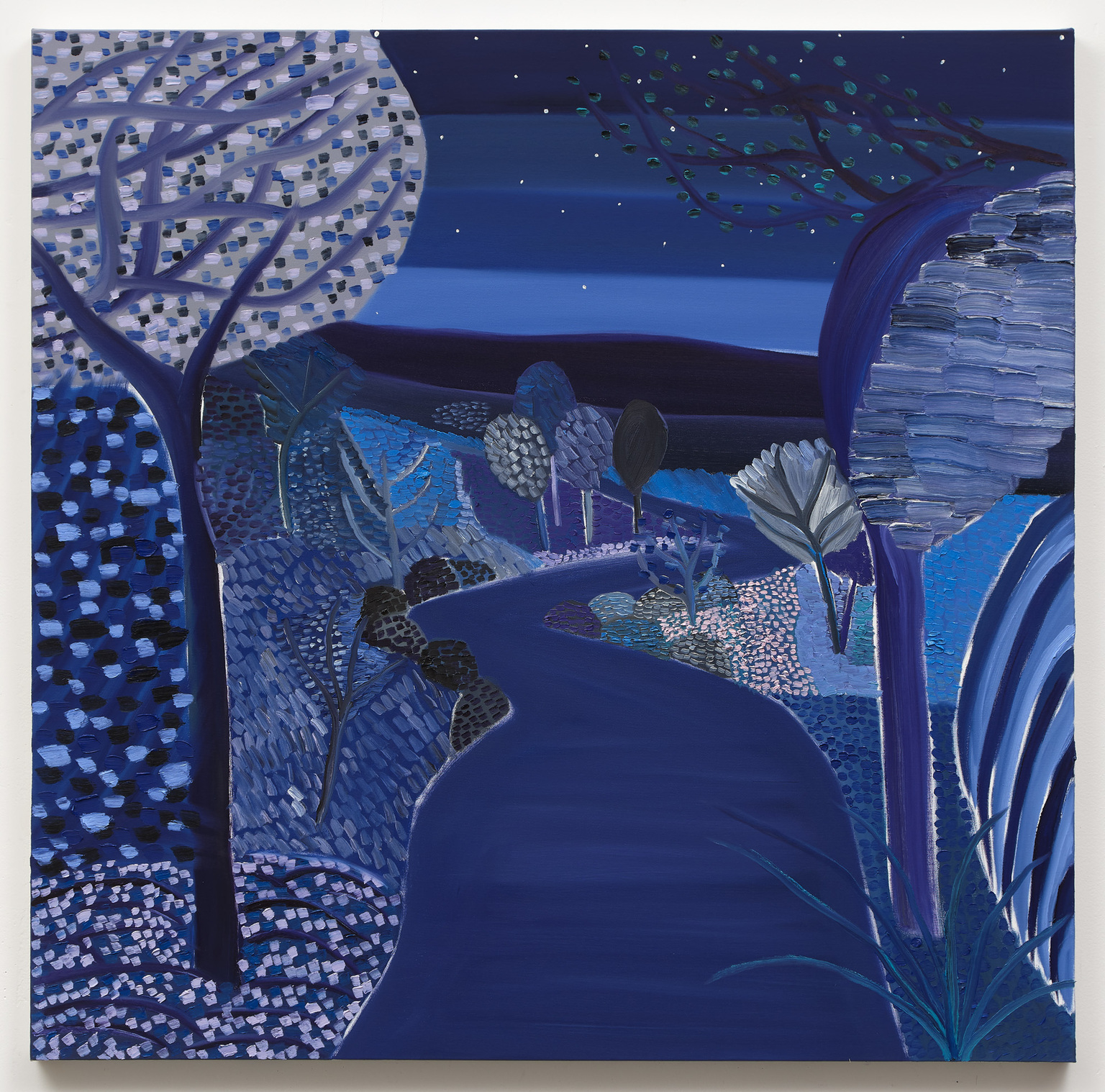 Can you tell us about your process? How do you go about creating a new work?

My process is not limited to the time spent in my studio painting, in fact I would say over the past year the making of my work has come to a rhythm where most of the work is done in idle moments when I am at home daydreaming, or watching movies and listening to music, drinking coffee or going out on walks that have no destination or purpose in mind. During these in-between moments I’ll often have quick flashes of imagery appear in and out of my thoughts, they could be shaped or triggered by something I saw or heard out in the world, an artwork I have seen, and more and more the works I have done in the past. Going by intuition and my emotions I will then head to the studio and set out to elaborate in paint these vague glimpses I get. The process is improvisatory as I don’t do any sketching or planning beforehand. The actual time spent painting is meditative in nature and they inevitably come to appear as they do in the final image, and I don’t spend too long deliberating on decisions, simply trusting my instinct and the flow from hand to surface. 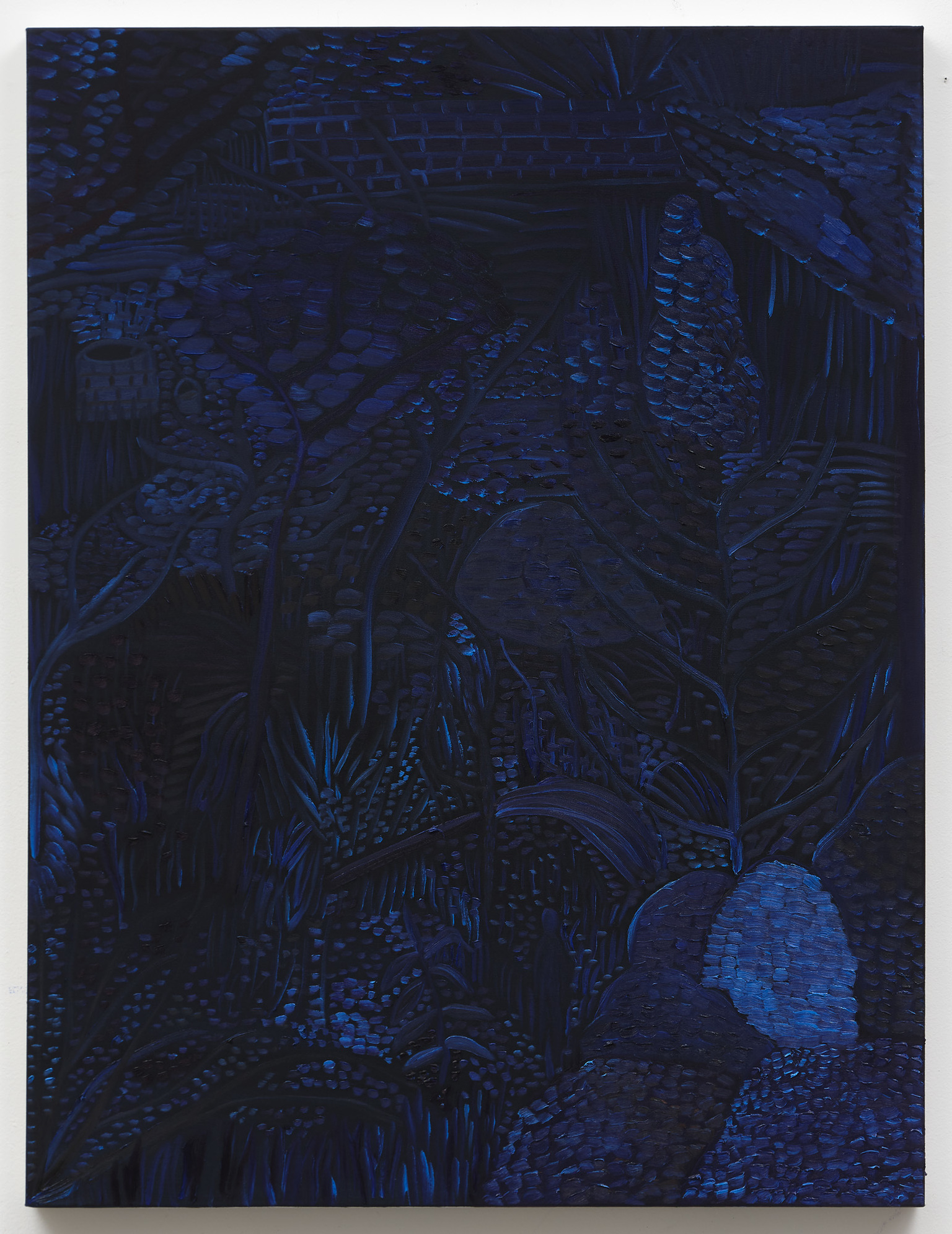 There are hints of melancholy in your work which often features a lone figure. Do you intend for your paintings to be interpreted in this way?

Living a fairly reclusive life and finding the most stimulation and enjoyment from matters of the mind, be they following the natural path of my imagination or watching films in the dark of my living room, an activity which is a part of my routine I pursue every night without fail, it’s inevitable that the solitary nature of this pattern seeps into and informs my work. That said, I would like my paintings to have something in them people across the spectrum can find things they identify with. I do believe that there is an inherent loneliness or melancholy to much of contemporary life, and on a broader level I feel my work speaks to this quality in addition to being a reflection of my thoughts, fascinations and impulses. 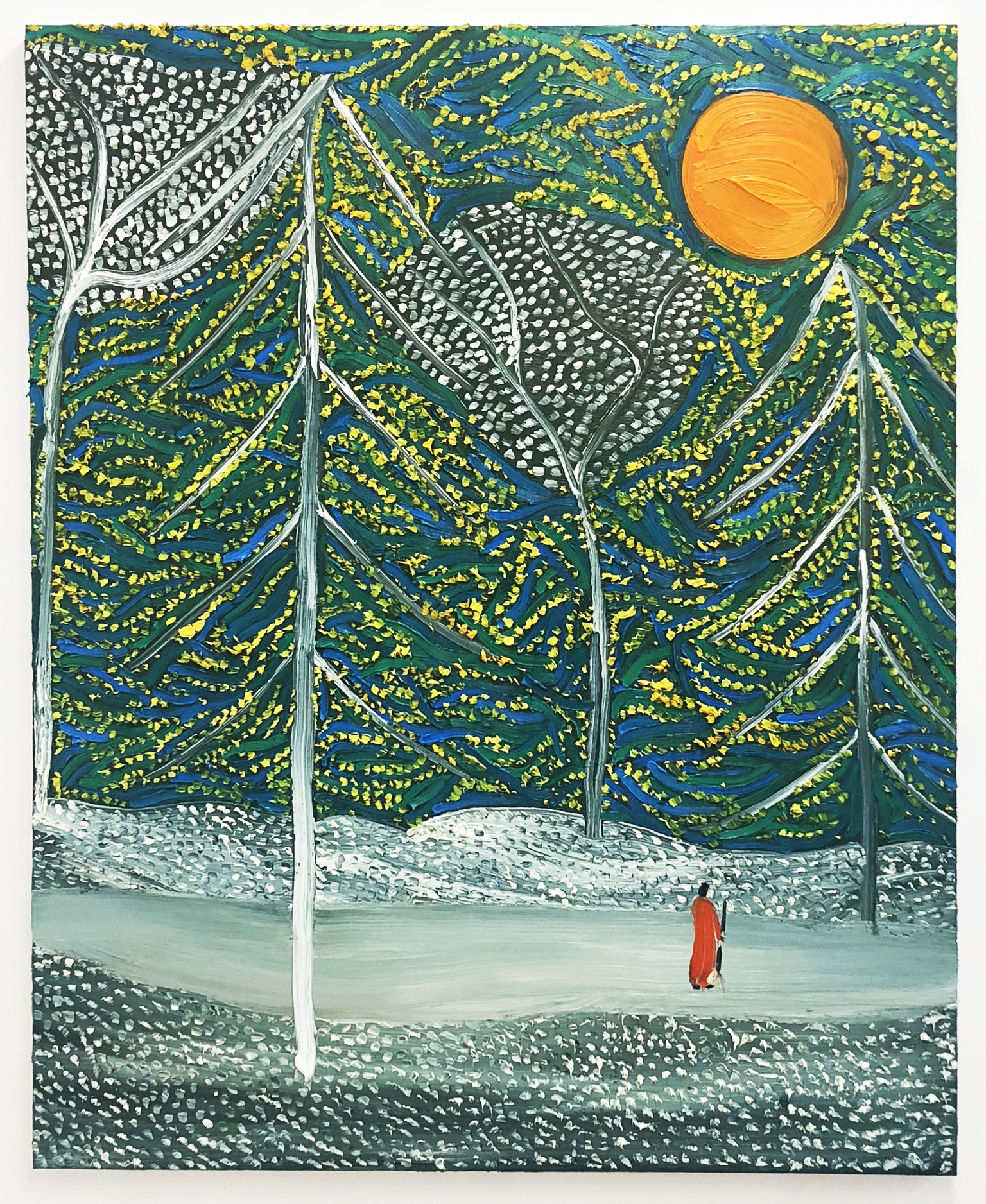 You work in both oil paint and watercolor. How does the experiences of using both materials compare to one another?

I haven’t really considered the difference in the two mediums in my practice and I don’t distinguish between them in a hierarchical manner. Gouache and watercolor I can work with at home, as the works I do on paper tend to be on a smaller scale than my oil paintings. This is useful when it’s an odd hour and I have a serious urge to make something. However, I really enjoy the tactile nature of oil paint, with which I paint in an equally immediate manner as the water-based paintings on paper.

What source imagery do you use for your work? Are the scenes thought up on your own or do they come from a reference?

There isn’t any source material I keep on hand in the studio, just a mental database of art I have seen or impressions from day to day life, conversations, and so on. Instagram is great for looking at art, even as it’s no substitute for the real thing. Being so far out in Edmonton, Canada, which is where I live, social media is still the next best option for keeping myself in touch with what other artists are doing. 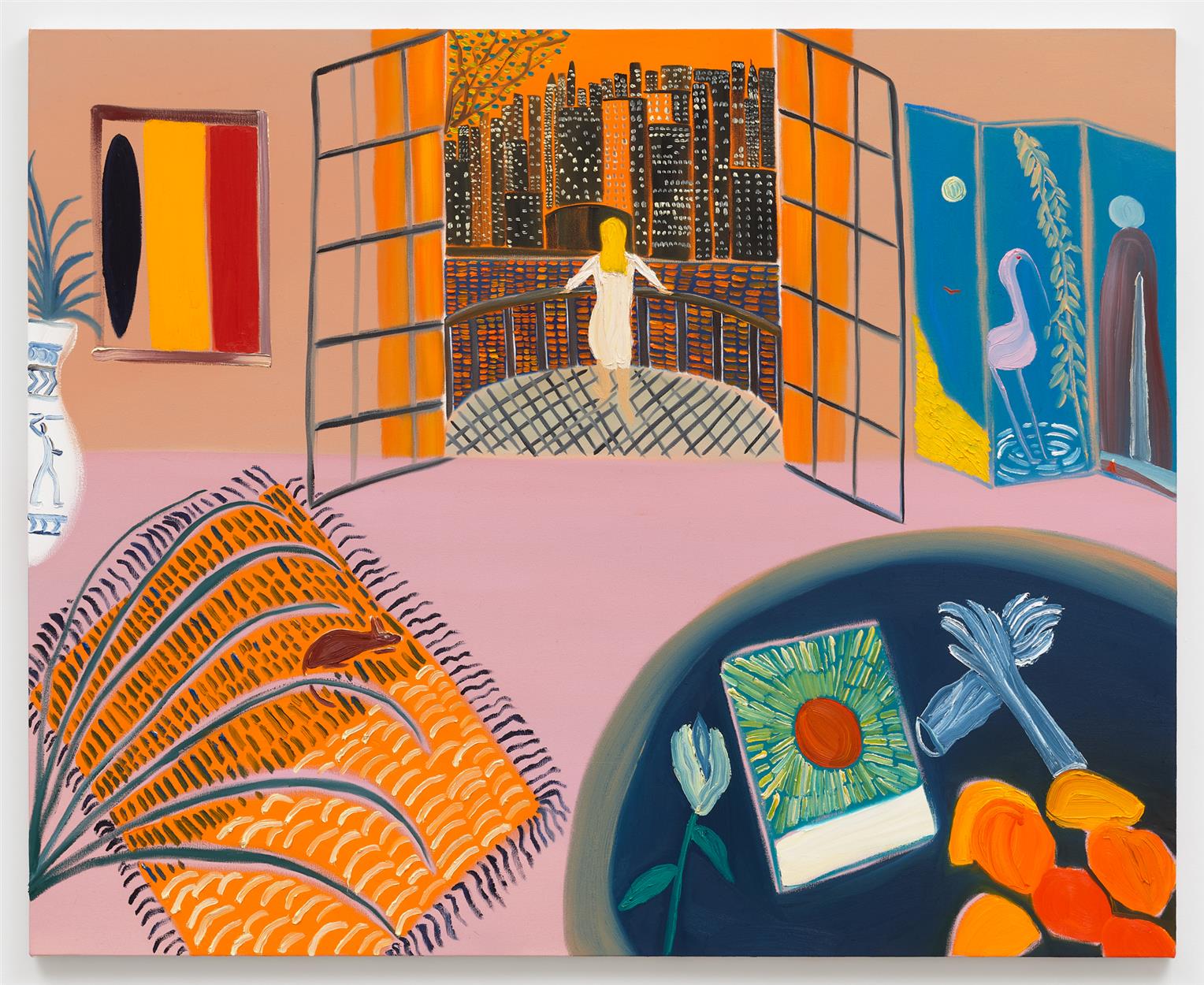 Where do you think your work fits in dialogue with artists who came before you?

I have not really thought much about my place in the histories and lineages of painting. This may sound a bit idealistic, but I really would like to think that anybody out there painting or drawing something at the moment is engaging in the same larger, perhaps infinitely vast conversation as I am about the craft.

You had your first solo show at Karma earlier this year. What was that moment like for you?

I was grateful to Karma for the opportunity to show my work in a gallery setting and happy that I could share the physical works with a wider audience. 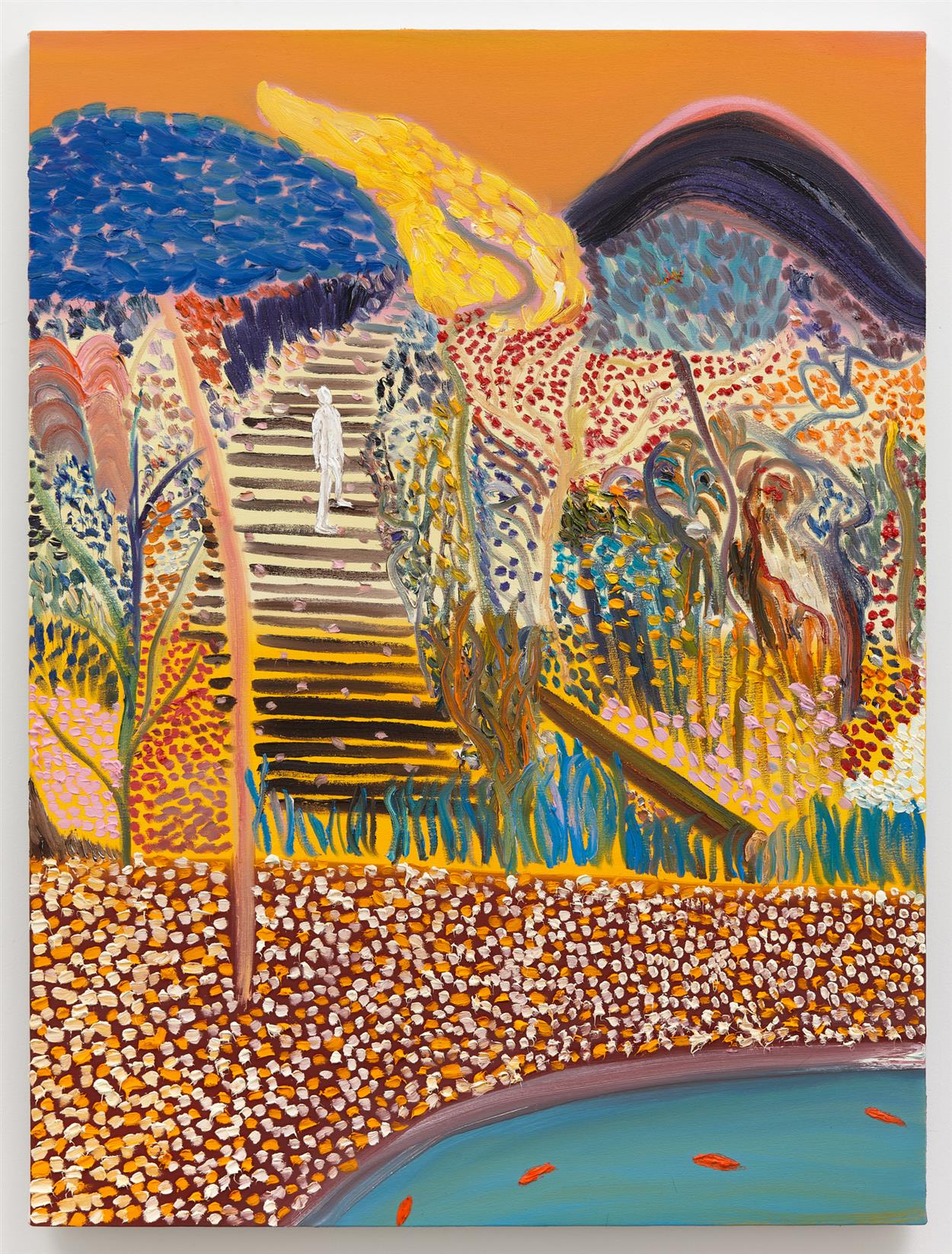