Maureen St. Vincent adopts a Surrealist style of creating as a way to invite a natural sensuality into her work. Heavily influenced by the women in her life, St. Vincent pays homage to humans’ most basic and primal instincts, using symbolism relating to the body in an effort to encourage personal liberation. Complimenting St. Vincent’s drawings are custom frames whose shapes result from the forces of the artwork they house. St. Vincent is based in the Bay Area, CA. 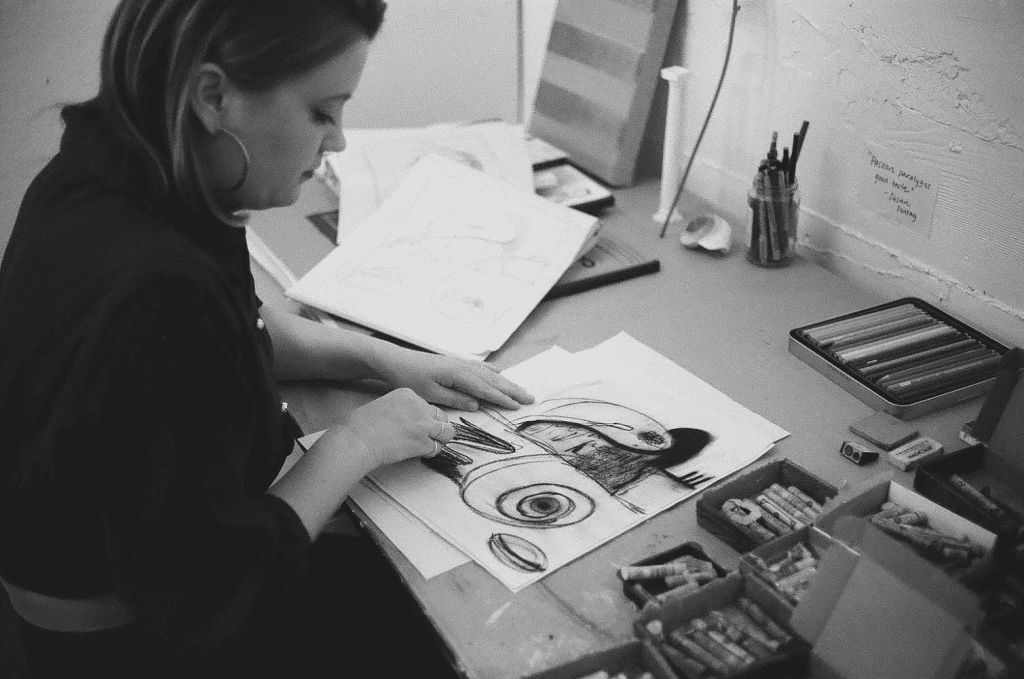 You are part of a young generation of female artists hustling and gaining recognition. What does being a part of a strong female community mean for you?

For many years I had a tiny audience that consisted of several female artists and my grandmother. My first studio space after undergrad was a bedroom in my grandmother’s mobile home. She would occasionally take breaks from watching daytime TV to sit in the corner of the kitchen: the only spot in her house where she could see me paint. She knew nothing about painting but would sometimes utter things like: “That is quite beautiful but very unusual” or “What is that?” These memories still inspire me to make paintings that embody bizarre beauty.

Today, my audience and community has grown and mainly consists of other female artists. We encourage each other, celebrate each other’s work, and create opportunities to exhibit our work together. When I’m feeling discouraged or ridden with doubt in my studio, I hear encouraging words from a specific female artist who is also a dear friend, and make work for her. 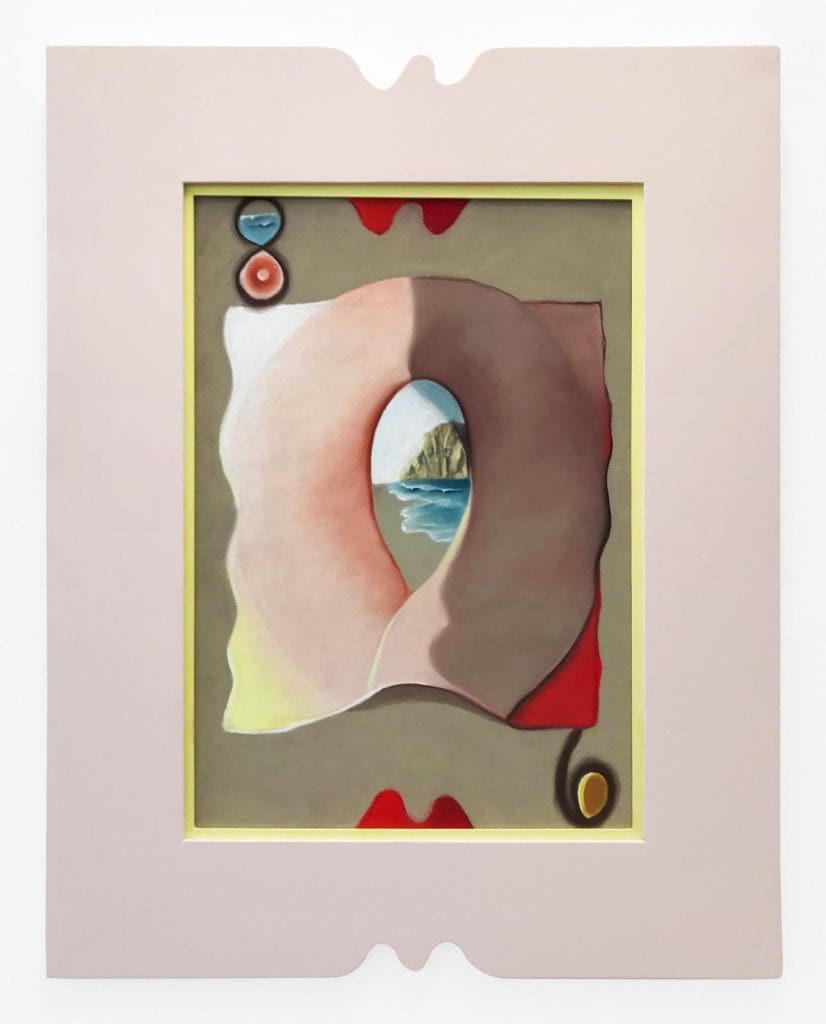 Recently I went to a Judy Chicago lecture and she talked about how she had to fight to be visible in the art world for many years. I mean really fight. It’s because of artists like her that I was able to give myself permission to be an artist, and to make the kind of work I’m making today. My first priority is to make the best work I can, followed by sharing it with the world. As I continue to put my work out into the world more and more, I aim to fight harder. 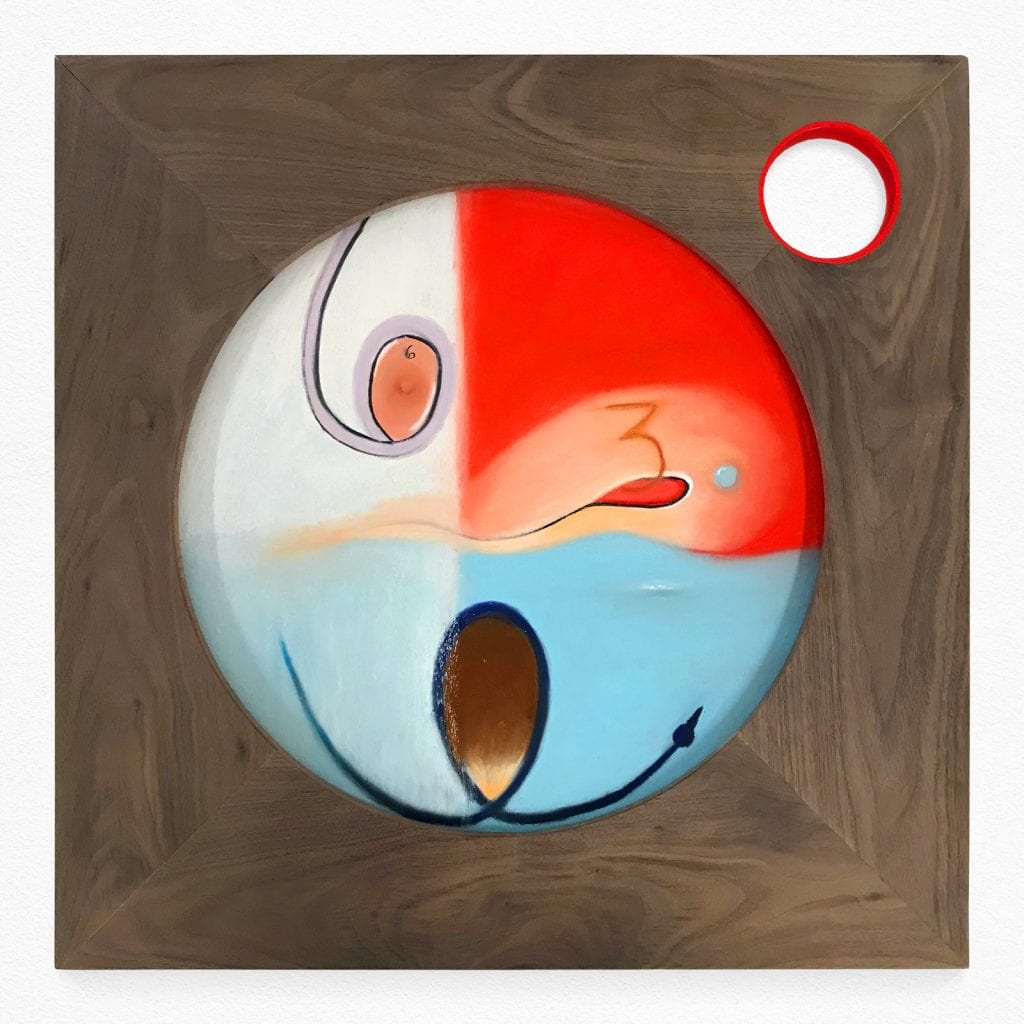 I’ve noticed that the conversation is changing around gender equality but I’m not seeing actual change within the art world in terms of greater female representation. Instead, what I am witnessing are female artists who are getting fed up and banning together to create opportunities to show work on their own terms. 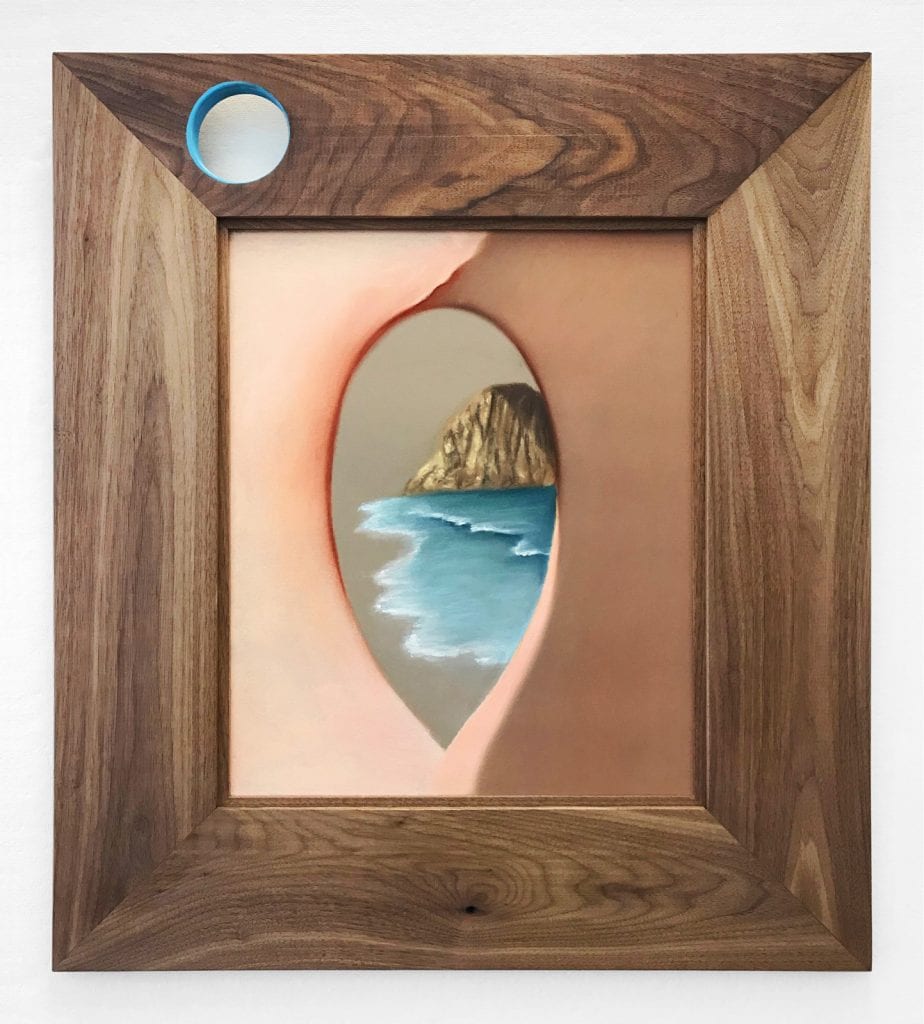 Your work has obvious ties to Surrealism. When did this genre first catch your attention?

I was feeling stuck in my practice several years ago and felt the need to bring the figure back into my work but I didn’t know how. I resigned from painting for several weeks, and made a series of chalk drawings on newsprint. Out of those chalk drawings, I created a shape that resembled disembodied legs. This idea of disembodiment generated a new surrealist vocabulary. The isolation of various body parts in my work, such as legs or breasts, suggest an out-of-body experience—the moment when the body tingles, wanders away from the earth, and loses control.

By adopting surrealist imagery that breaks away from the constraints of the rational world, I am able to create a space where sensuality sets its own rules, and anthropomorphism allows us to act out our inner fantasies and desires. 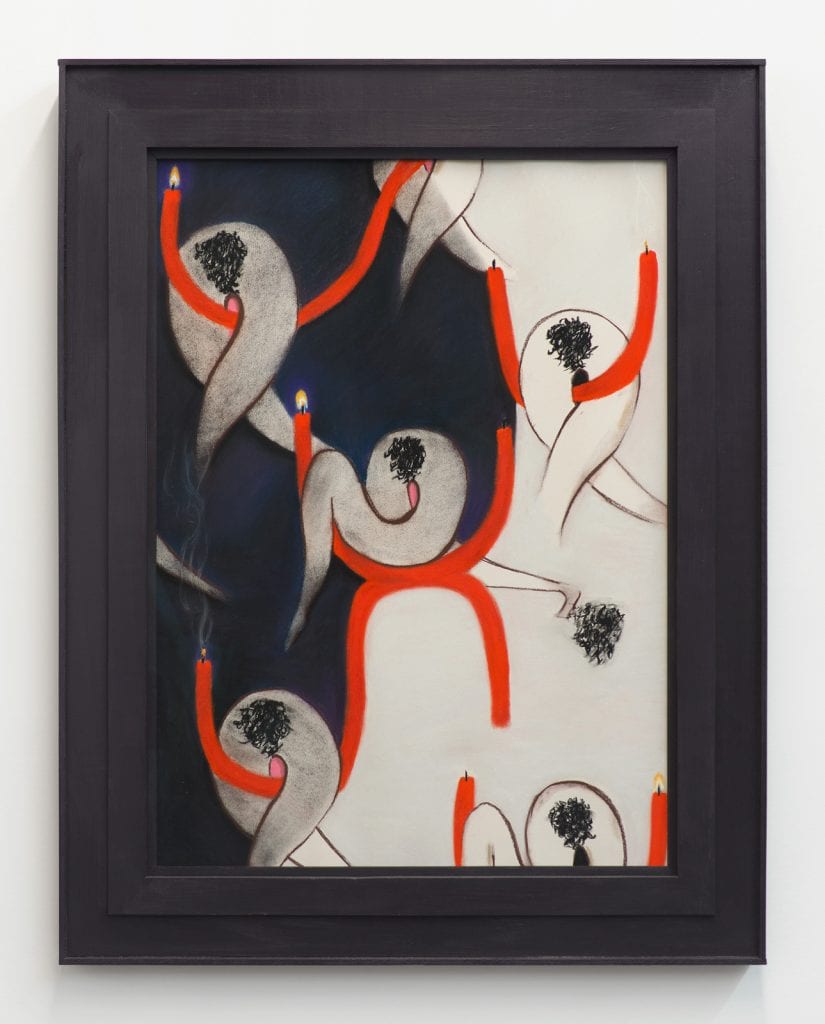 Are there recurring themes that you explore in your work? 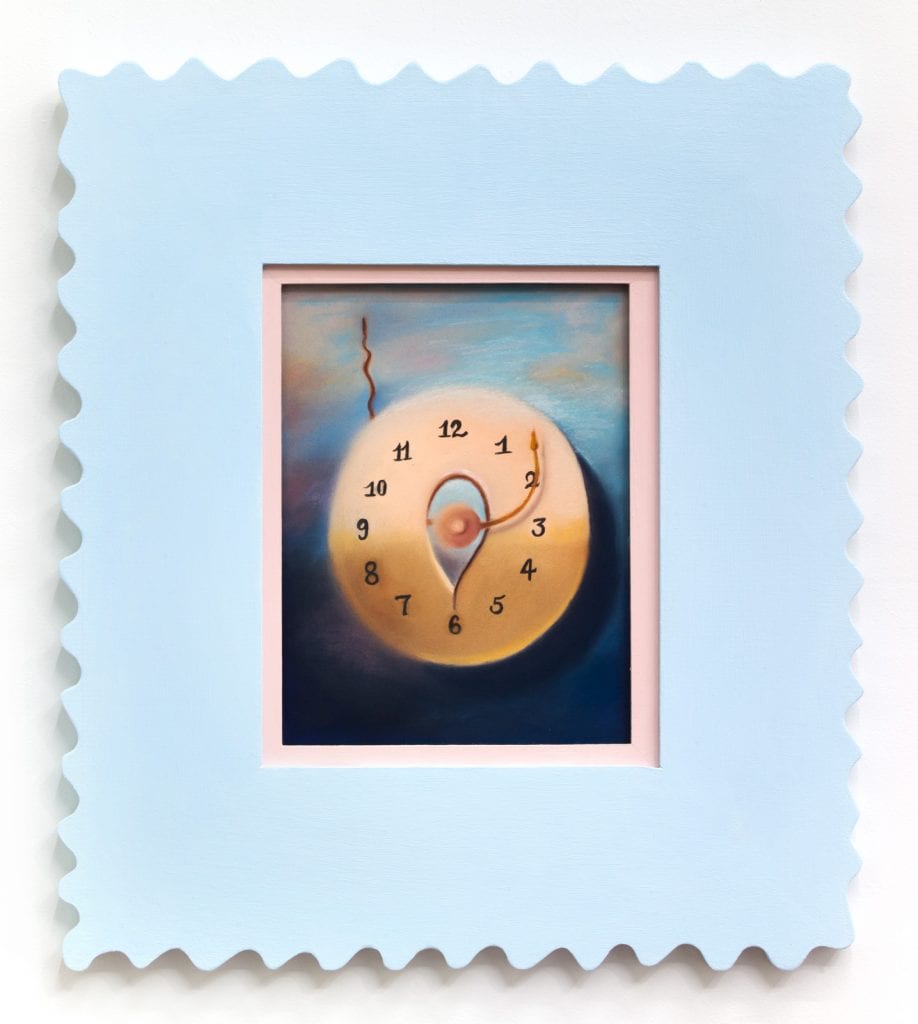 You create custom frames for many of your works. When did you begin this practice and how do you see this element in fitting with the work overall?

Several years ago, I started making soft pastel drawings on paper and I needed to figure out a way to present them. I started out by making traditional frames but after seeing Florine Stettheimer’s paintings at the Jewish Museum, I was inspired. Her frames were unabashedly decorative and imaginative: they often outshined the paintings themselves. After seeing that show, I started to think about frames in relation to figuration. I imagine the shapes, lines, and overall spirit of my drawings as an insidious force that changes the shape of the wood I use to make my frames. My goal is to transform the wood’s inherent rectilinear shape into corporeal form, marrying frame and drawing into one. 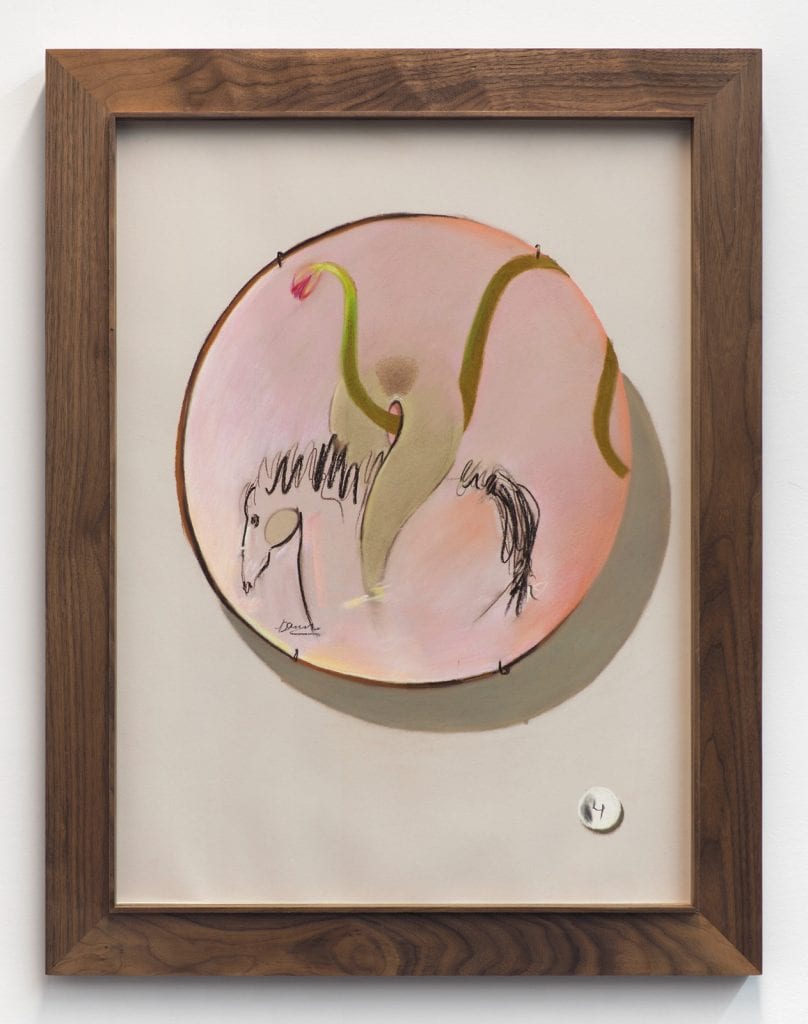 Your work often acts as a portal to another world or a glimpse through a keyhole. Can you elaborate on this intriguing feature?

Recently I have been using vulva-like shapes as holes or windows that provide glimpses into alternate worlds in my drawing. I am interested in creating visual experiences that forces the viewer to peer through an opening, in order to frame something familiar in an unfamiliar way.

When I first moved to New York City, I would peek through the holes in fences surrounding construction sites. The act of voyeuristically looking through a tiny hole to witness a reconstruction of space, transformed a typical construction site into something mysterious. In my work, I try to sensualize mundane scenes such as coastlines and rock formations by framing them inside anatomical shapes that allude to female form. My ultimate objective is to build a sensual visual world in which the ordinary and the perverse no longer hold as a dichotomy.