Morteza Khakshoor’s Attention to the Male is Striking

Morteza Khakshoor works with a range of subjects, but it’s his attention to the male––in all his foibles, struggles, and pathos––that remains a salient feature of his output. As frequent protagonists in his paintings, like all of his subjects, they result from circuitous paths through found images and memories, seen and remembered, or invented from whole cloth. His consumption of these images feed into his daily drawing practice, which in turn, metabolizes disparate information into schema for paintings at once playfully tragic and colorfully dark. 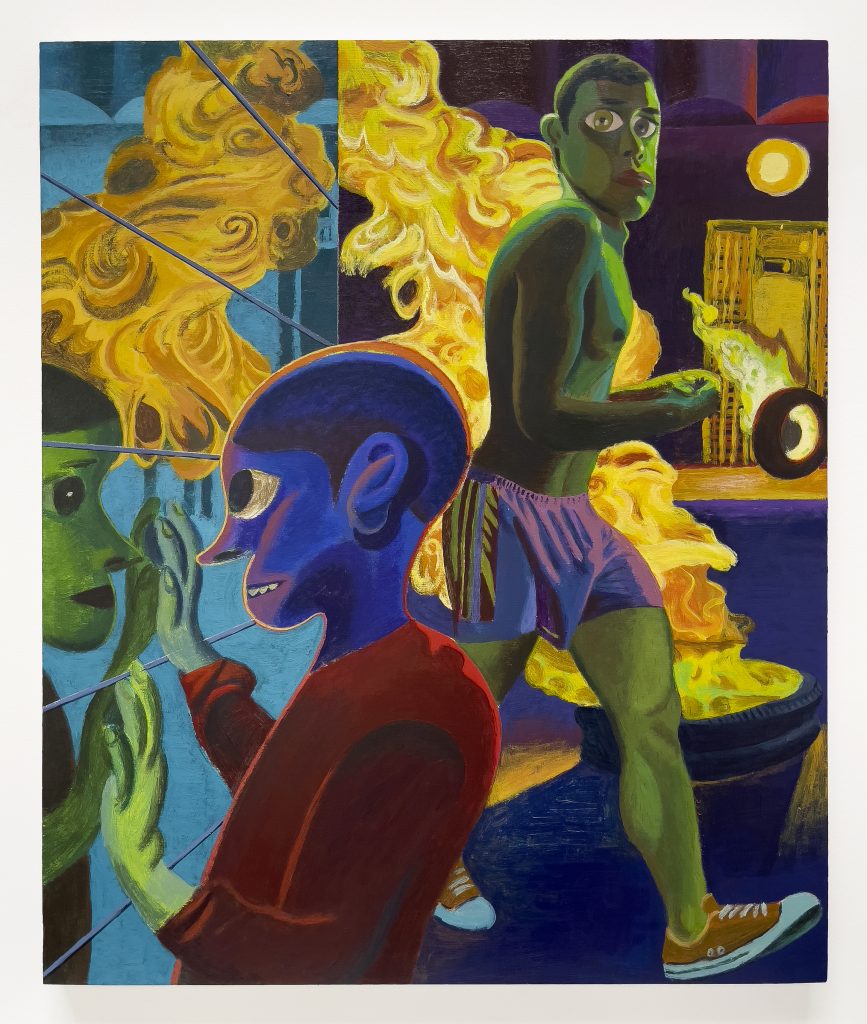 Tell us a little bit about yourself. Where are you from originally and when did art first enter your life?
I was born in Iran and grew up there. Until the age of eighteen, when I went to the Tehran University College of Fine Arts, I was living in a small town in the North-Eastern part of Iran. I dropped out of college after a year or so because I realized I couldn’t study what I wanted which was figurative art. After a failed attempt to move to Italy (I wanted to go to the Florence Academy at that time), I moved to the U.S. in 2010 to study figurative sculpture; I was crazy about Michelangelo and Rodin back then! And really wanted to learn to sculpt the human forms the way those guys did. While attending this very small college in Connecticut, I randomly enrolled in a printmaking course and immediately felt that I finally had found the medium I was meant to be working in. So, for the next nine years – in college and later in grad school – I mainly did printmaking and drawing and did not really have any interest or urge to paint. I worked in intaglio, relief, and to a lesser degree in lithography (although I was never good at it!). Towards the end of grad school, I picked up screen printing, and perhaps that was the time I started thinking about color and what it can offer and all that. During and after grad school, I did a little bit of teaching which I decide to not continue any longer. After about four years in the Midwest, I moved to California; where I picked up painting – I think because of the light and how different everything – I thought – looked! In late summer this year, about a month ago, my wife and I and our two cats, all moved to London UK, leaving behind our American life – at least for now. I wouldn’t say I was surrounded by art necessarily when I was a kid, but my childhood household was also not completely artless. My dad was always interested in literature and also music – He was an amateur Setar (a traditional Persian instrument) player. He also happened to have a couple of artist friends – whom I started to train with when I entered my teenage years. As long as I can remember, I had always been interested in drawing from the time I was a little boy. For me, art has always been there in my life, from the beginning. Although I did not know that it is something one can pursue as a career in life. 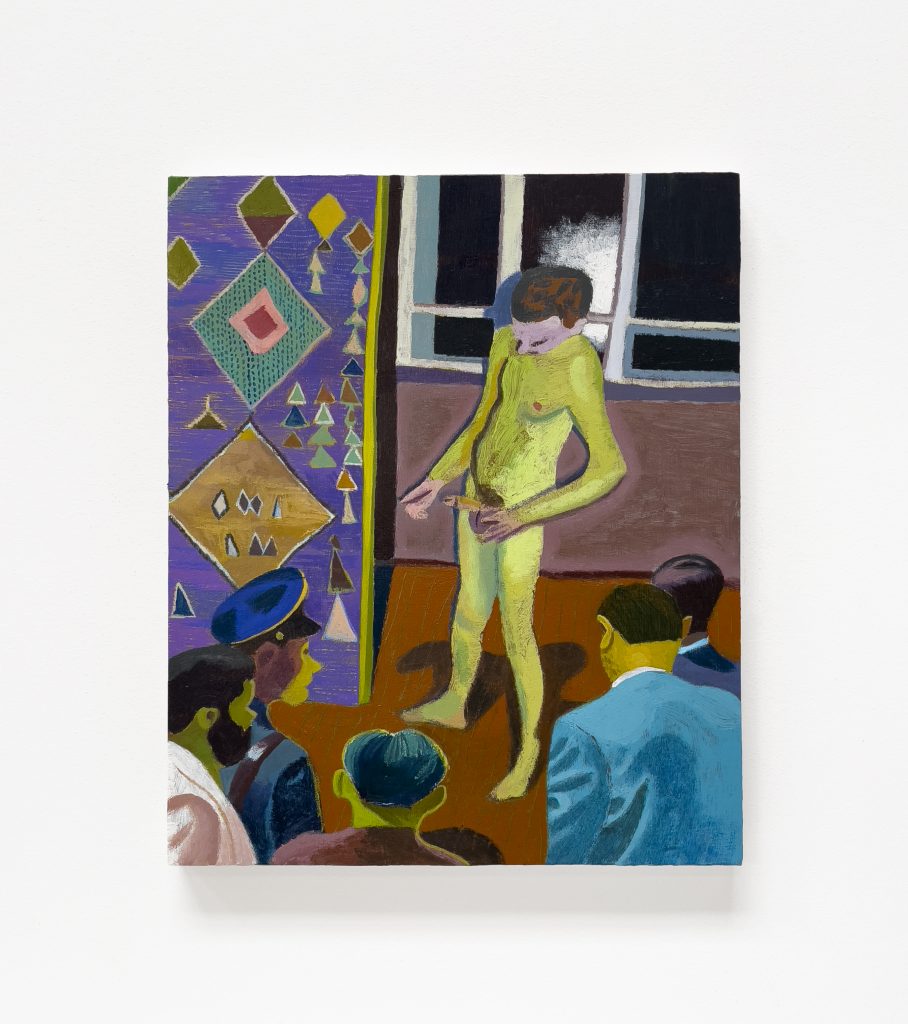 Has your work always taken on the style it currently embodies?
Yes and no I guess; I really don’t know how to answer this question. I mean, there is always some sort of gradual change going on in the work – in which I would like to see it as a progression. I am interested in various things, both conceptually and technically/formally speaking. I switch from one mode of image making to another occasionally; different ways of representation, I guess. One thing/idea and form/style bore me so much really. Also, I am still not quite sure about this whole idea of having/fading/reaching/arriving at ‘’my style’’ yet. I am not sure if that is something I am interested in at all! But I am aware that is something being valued so much by many in art, if not everyone these days. I guess in a way it is inevitable to escape having some sort of recognizable elements and characteristic in everything one makes as an artist, but I often think about how interesting it would be if one could change their ‘style’ from one project to another, from one piece the next one!

What’s a day in the studio like for you?
It depends on what I’m working on at the moment. If I am painting – which usually means working on several pictures at the same time – I most likely start right away working on the paintings – starting with the one that I have some sort of solution/idea for the direction it needs to be taken to. And if I am in an ‘in-between paintings’ period, I most likely go to my drawing desk and make some drawings until something interesting happens. I might also spend some time just looking at the drawings around the studio and see if I can come up with something based on what I see. For example, I have some different scenarios these days that I know I can persuade based on what has been going on in the studio in the last couple of weeks. So, it really depends on what is or is not on the walls on that day. But one thing that always remains the same – in terms of my studio day habits/routines – is the tea-making ritual (Black tea always, in case you are wondering!) and the occasional smoking breaks. There are days that I listen to music in the studio while working, and there are days I rather not to listen to anything at all. 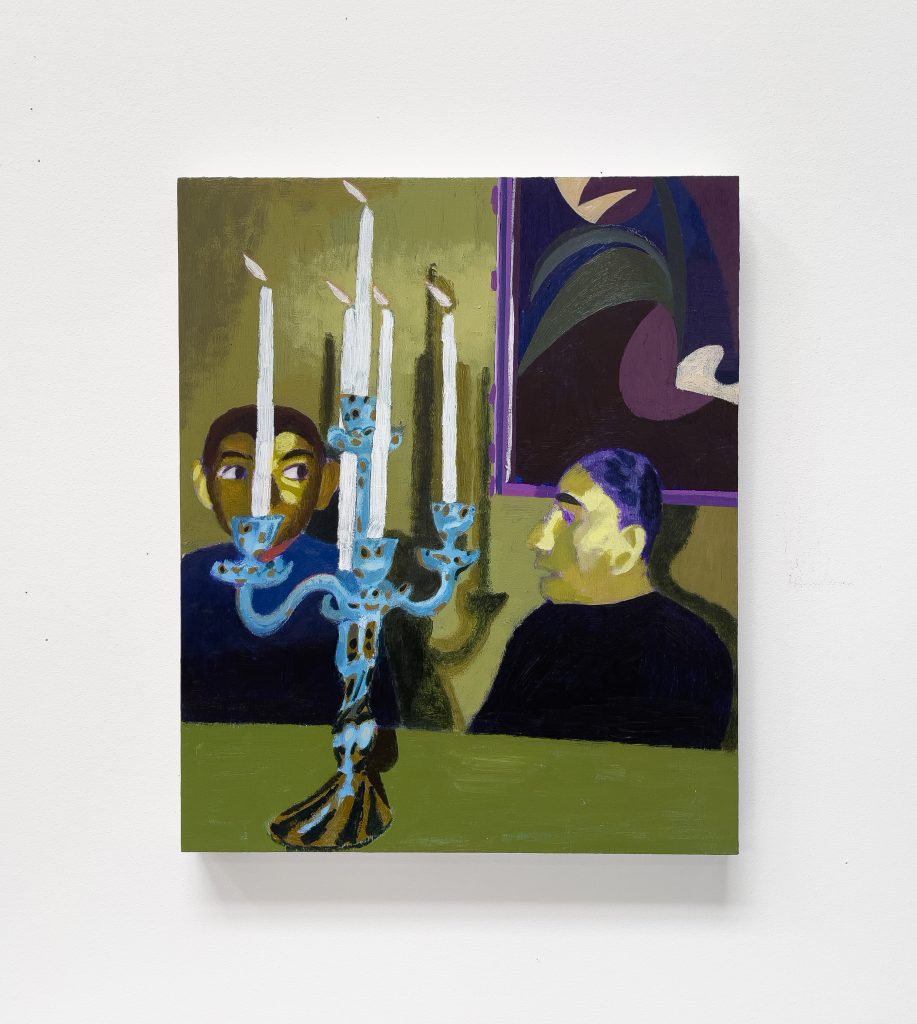 What’s next for you?
As far as exhibitions and shows go, I have several upcoming events planned for this year and the next year that I am working on now. I just opened a solo show in London that runs till October 20 at Wilder Gallery. Apart from these, I think the main thing for me would be figuring out life in the UK and specifically in London – where I just moved to. I tend to adapt to the new environment everywhere I go, usually rather quickly, but there are so many things still here that I need to familiarize myself with and also many places I am looking forward to go and see here.

From where do you draw inspiration?
Everywhere really. Things I read, watch, see, or listen to; pictures I stumble upon on the internet, scenes I see in the street, pictures I take on my phone, movies/news/books I watch and read. I make drawings of all these on a daily basis and at some point, these drawings create new scenes/scenarios in the studio. My studio – if it is in a good-productive/functioning mood – basically is a place for these sketches/visual notes to freely move around and luckily come together in some unexpected, interesting ways to create new stories. When that happens, I intervene and take it from there. 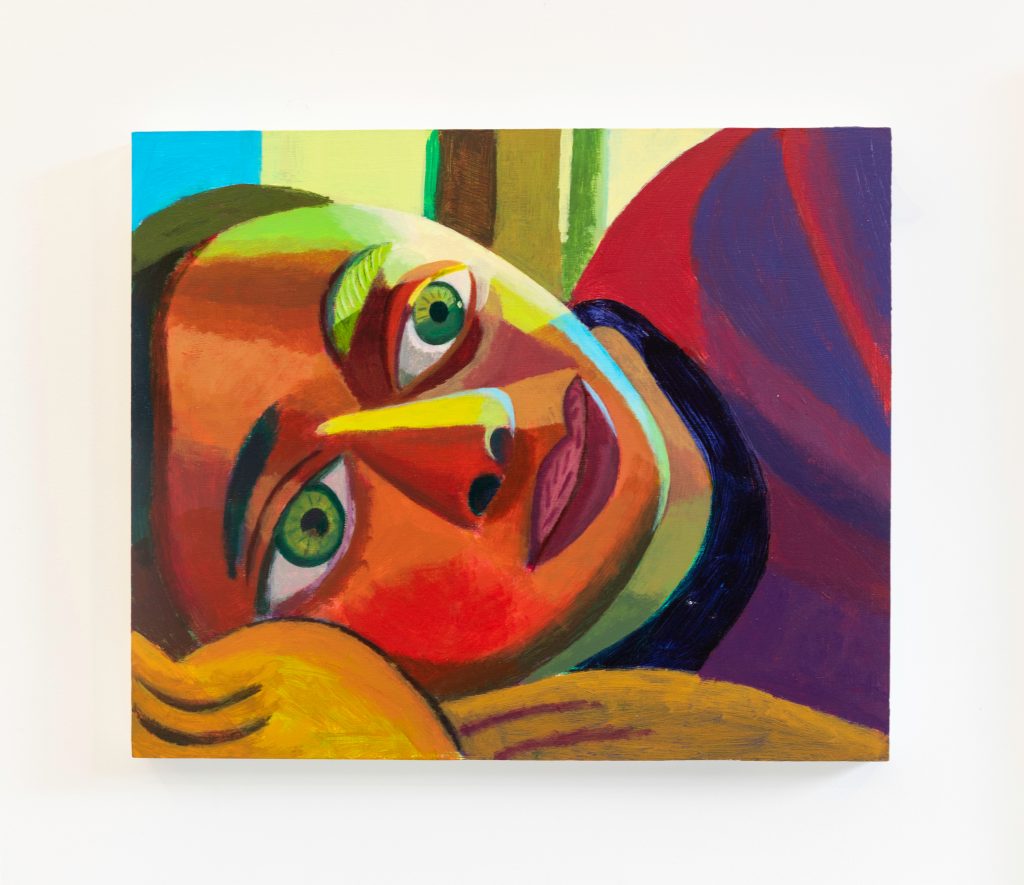 What source material do you base your work off of?
I like pictures in general; any type of pictures. I constantly save images I see on the internet, take pictures of random things I see on the street, in bars, and museums, scan pictures of books I see in libraries and archives, etc. A combination of images I end up making based on these ‘gathered’ pictures and the ‘absent minded’ sketches and doodles I make – that happens when I am talking to a friend or watching a documentary or an interview or just sitting on my desk and daydreaming – creates a pile of drawings that I use as a main source of my work.

Does your work reference any Art Historical movements?
Right now, I am very interested in early Renaissance paintings – works of Masaccio and Mantegna for example – and also cubism, mainly works of Picasso and Braque, Picasso for his approach to form and Braque for his sentimentality. I am sure there are more art historical references that I unconsciously bring into my work – like any other things that I see, hear, and experience everyday. 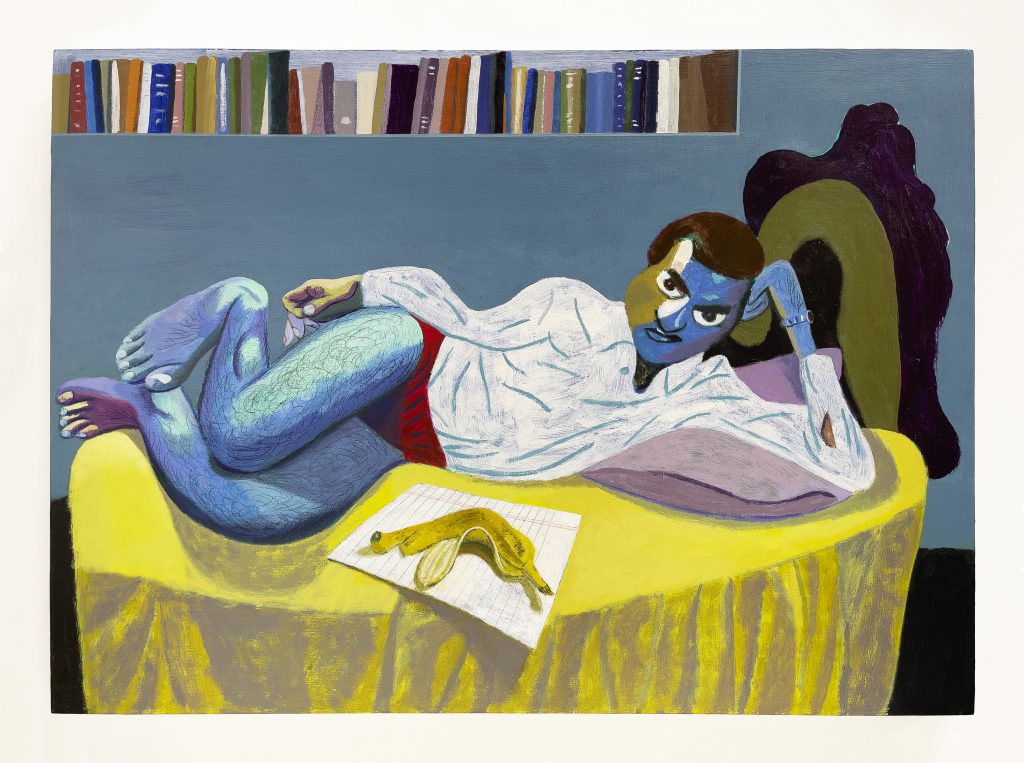 At the end of every interview, we like to ask the artist to recommend a friend whose work you love for us to interview next. Who would you suggest?
I am going to name a few; Fiza Khatri, Judy Koo, Pourea Alimirzaee, Tsai-Ling Tseng. 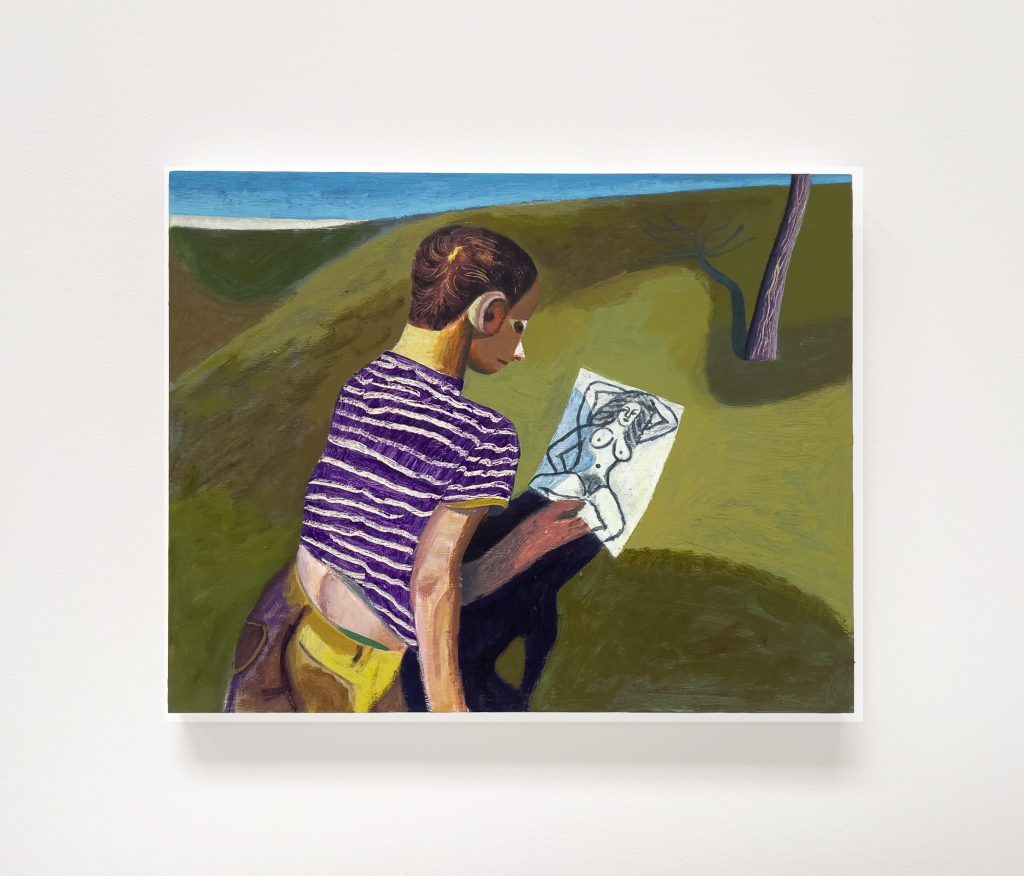