Martinez, (b. 1980 Pasadena, CA) earned his BFA with honors from Art Center College of Design in 2005. His work has been exhibited domestically and internationally in Los Angeles, San Francisco, Minneapolis, Miami, New York and the Netherlands. Martinez has shown in venues including the Vincent Price Art Museum, Biola University, LA Louver, Showroom MAMA, Providence College Galleries, MACLA, SUR biennial, Chinese American Museum and Euphrat Museum of Art. In addition, Martinez has been covered by the Los Angeles Times, KPCC, KCRW, Fusion, Art News, Opening Ceremony Art Blog and Wired. Martinez’s work lies in the collections of the Cornell Fine Art Museum, Manetti Shrem Museum of Art, and the Museum of Latin American Art. Martinez has his first solo museum show at the Cornell Fine Arts Museum from May 25 to September 10, 2017. Patrick Martinez lives and works in Los Angeles; he is represented by Charlie James Gallery. 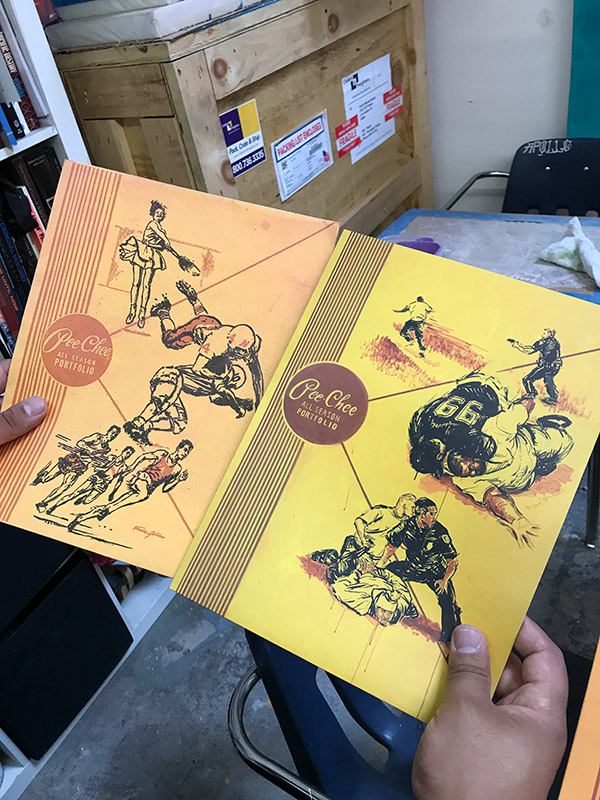 What is the inspiration behind most of your work?

I would say the foundation inspiration is Americana. In 2005, I was in college and wanted to make works about police brutality and police being on high school and college campuses. From that, I did a generic version of a Pee Chee Folder with a kid getting harassed by a cop. The idea came from when I was remixing it in college. I showed these works in 2006 and 2007, then came back to the idea in 2014. I have so many videos and still images of kids, like Eric Gardner, getting attacked by cops and higher authorities. A lot of my inspiration comes from public events like that. 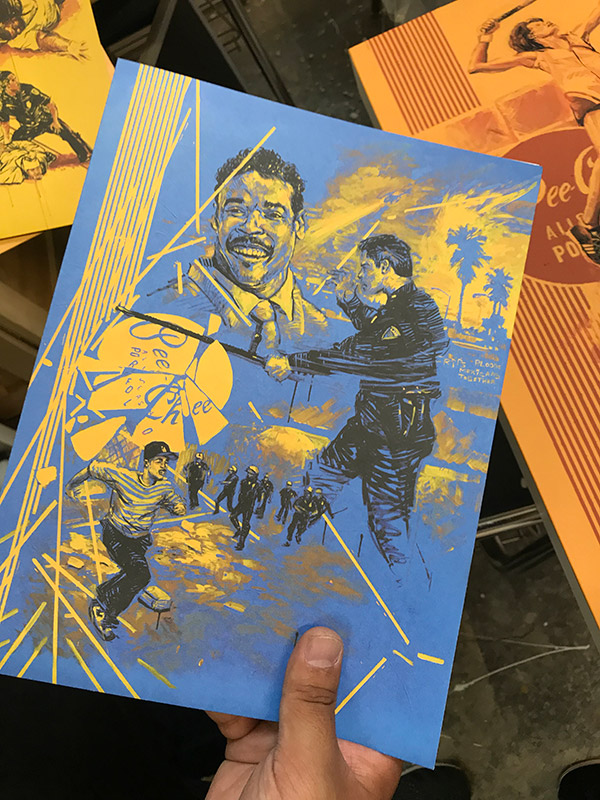 Where did you study?

I studied at the Art Center College of Design for my undergrad. From there, I experimented with ideas and my craft.

What is your first art memory?

Probably drawing and copying cartoons and comic books. You can attach yourself to that. As a little kid, drawing Is so direct; all you need is a piece of paper and to try to mimic what you see.

Are you completely self-taught, aside from the Art Center?

After the Art Center, I honed my skills in.

Are there certain artists or artistic movements that inspire you?

When I was maybe 10, I went to the Norton Museum; I was young, but I understood why people were there and why it was so important to see the art there and experience it. I enjoyed it so much. It’s not one artist that inspires me; it is the idea of it. These people are creating pieces, but they were creating work for their time and I understood that art is almost like an artifact. It was a cool idea to me; I want to represent art that is geared toward our time. Specifically, I love contemporaries like Mark Bradford and Barbara Kruger. 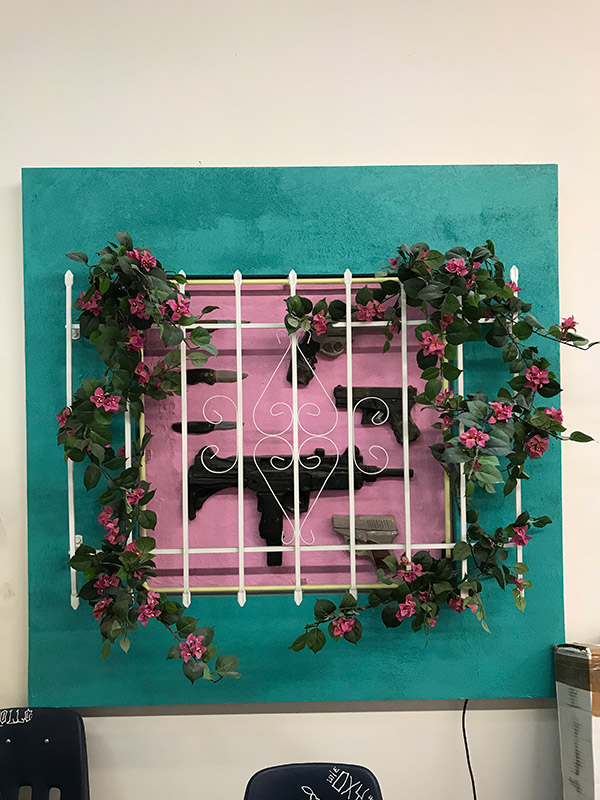 How do you see the world we live in today for your artworks?

With my neon pieces, I was getting ideas of LA and the landscape. In 2008, I would drive from DTLA to Montebello and you would see the neon lights for businesses that were closed. I thought it was interesting that these neon signs created for advertising were still speaking when people were sleeping. There is so much dialogue at night, so my idea was to remix the messaging to reflect the times that we’re living in. For example, the electoral college piece was about elections and became for me how people, like immigrants and dreamers, were being targeted. All of my work intertwines in a way; the Peachy Folder speaks about protests and the issues currently in our society. These people have been displaced or discounted and others are trying to make light of it. 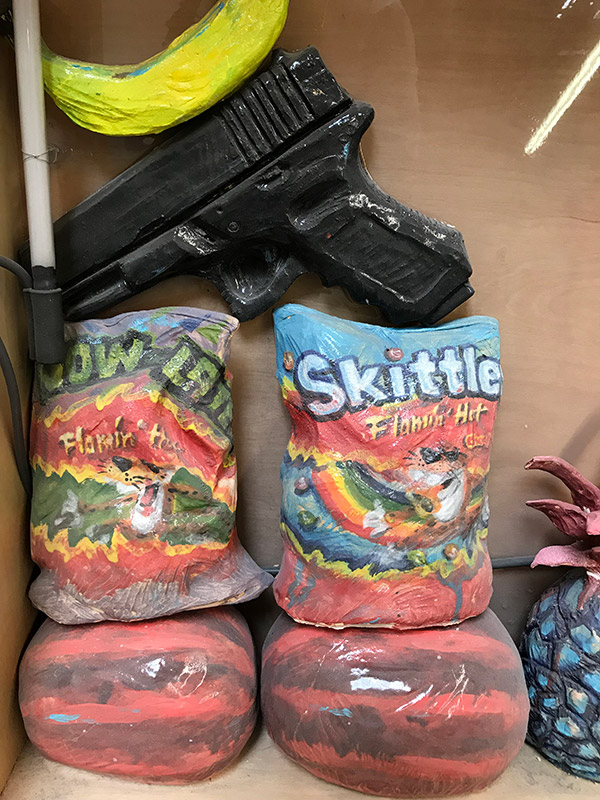 If you could have dinner with anyone dead or alive, who would you chose?

When did you start getting into ceramics?

My subject matter is speaking on art history, for example, when museums have works that are Dutch or still life, it’s for the purpose of rich folks showing off what they possessed; they wanted to show how they were living in abundance. In my ceramics, I am showing off what people have to eat and when they would eat it. For example, I would go to a liquor store and set up a still life, then I would paint from it. It all comes back to the time we’re living in. 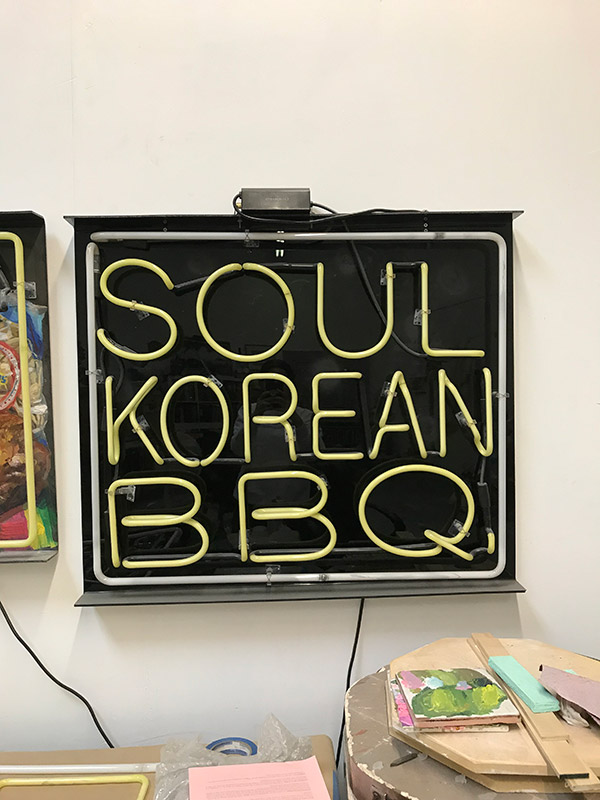 Is there a certain meaning behind your artworks?

It depends on the space; I like to mix it up. I always want to create something new. Something that comments on the time. But, I also want there to be layers to the work; I don’t want it to always be sexy. I don’t just want to decorate people’s homes, even though there’s value in that.

I don’t want my work to be sexy like Tracey Emin’s work. I want it to be able to be placed in differing environments, whether it be a liquor store or a gallery. I want people to be able to walk past it and not acknowledge it, thinking it was an advertisement, or see meaning in it. 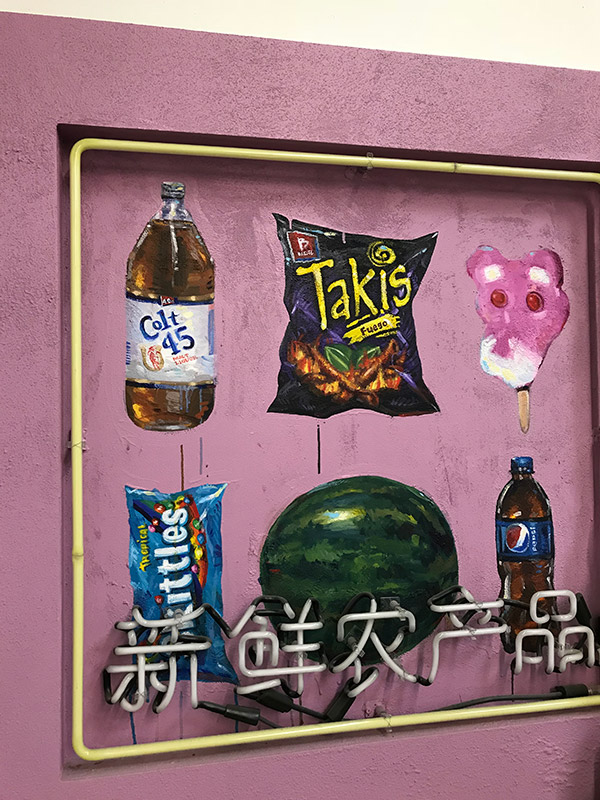 What do you have in the works right now?

I recently opened a solo exhibition at Vincent Price Museum with Pilar Tompkins Rivas. The exhibition speaks to Dreamers and the idea of home being a foundation of quick sand, somewhere along the way the white picket fence became a tall white cinderblock wall with giant wood stained gentrification fences. I’m also involved in Sideline at Galerie Lelong in New York, which is a group show about the recent protests in the NFL. The exhibition is curated by Samuel Levi Jones, who’s an artist based in Chicago.

How do you feel about the LA art community?

There’s definitely a lot of room to grow; it is such a big place. I was talking to different curators about how LA’s art environment needs to transcend. It has to speak to everyone at all times and be able to hold up in different environments. 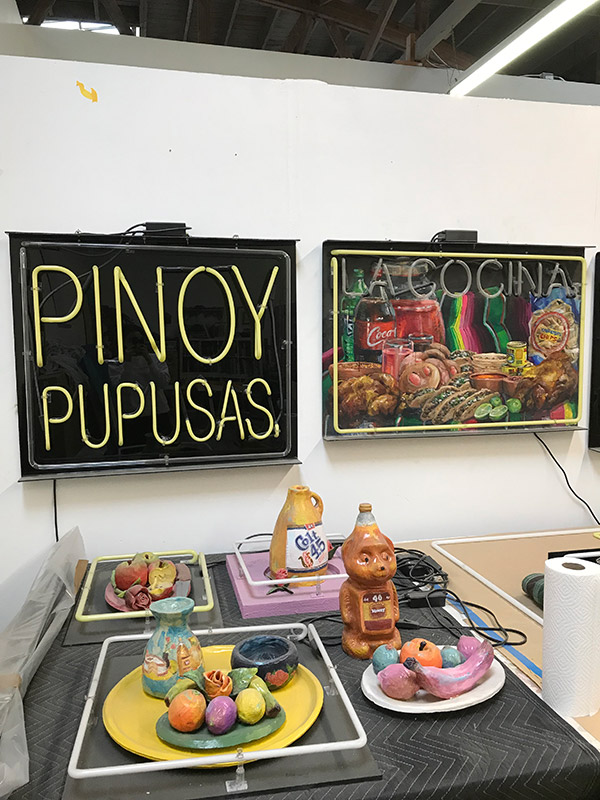 Do you feel like there is no ecosystem between LA and NYC art worlds?

Work in LA is great and the way we talk about the work here is great too, but there needs to be more of a critical discussion surrounding the work. The type of discussion we see happening with the work in NYC.

Do you have a favorite show you most recently saw or something that stuck with you?

The Ruben Ochoa exhibition at Art and Practice. I love the material he chose to work with. It has a very physical temperament. It’s also a nonconventional approach to material to create sculpture. The Mistake Room did something with Eduardo Sarabia. I enjoy the loaded ceramics and the presentation.