Can you talk about how you arrived at your latest series of paintings? Where did the idea come from?

RS: This latest series of paintings arrived from all over the place. Last winter I was struck by a very strong desire to start over. I was sort of forced into a state of submission that made me very open. I was really ready to try anything. And what kept drawing my attention was my older work, work that I had really turned my back on, and was kind of embarrassed of. Suddenly, I could see something in those early paintings that felt really fresh and honest. I felt I needed to re-enter that space I was in 10 years ago when I first really started getting to work and trying to paint. At the same time, I read a book called “Sapiens”, by Yuval Noah Harari. It really put a lot of things in perspective for me about humans and our behaviors. It also made the present moment make much more sense to me because, like most people, I was extremely confused and horrified by the election of 2016 and what’s come after. I was really losing faith in people. The information I read in this book made the election of Trump and the human darkness it laid bare seem truly inevitable. What I realized is that, our brains are still the same as they were 200,000 years ago. That means a human from that time could be taught to use an iPhone or a Mac Computer. It also means that our contemporary human brains basically still run on a fight or flight operating system. Our primary instinct is still survival, which makes fear our most motivating sensation. Someone like Trump really understands that; Appeal to people’s fears and they’ll do what you want them to. This really struck me as powerful and made me a bit less confused. Other happy coincidences coalesced. I happened to spend a lot of time in hot springs last year, and the visual experience of that was exhilarating to me – the reflections in the waters, the purity of public nakedness, a feeling of true humanness. Hot springs are a great equalizer. You can’t really hide in there, because everyone in that water is looking for a moment of peace. Also, what I was looking for from the experience of painting began to change. I started to see that the only thing that really needs happen while I paint is that I need to be present, and focus on what the brush, paint, and canvas are doing right in front of me. Nothing fancy, nothing else. The subjects of these paintings had always been with me, I just had to calm down enough to see them. 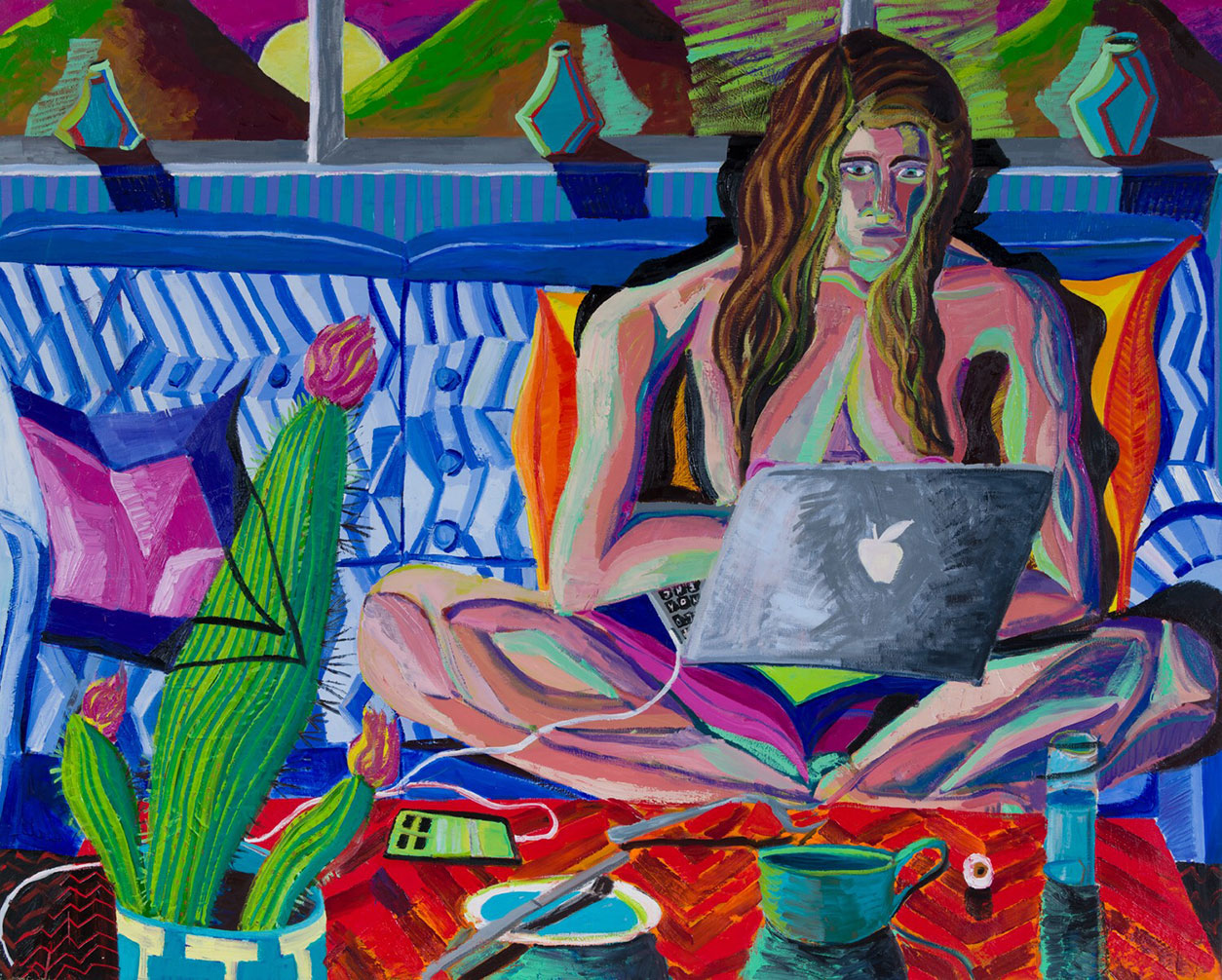 Your paintings depict beautiful, vibrant paradises. Were you nervous to inject something as common and almost mundane as the iPhone or Apple products into these scenes?

RS: I wasn’t nervous at all. It seemed very natural to me. I believe the iPhone has become the eye for humanity. We now see with our eye through the filter of the phone camera. It just made sense to me, to add that extra layer between the viewer and the scene I was painting. I have also noticed these past few years, that before people even look at my work, they often pull out their phone to take a picture. And I do the same. I thought I’d beat the viewer to it, and just have the phone be a part of the composition from the beginning. It was a happy accident that the phones and laptops are “Apple” [brand]. A thread of paradise and Eden started to run through all of the work, and the Apple of Adam and Eve’s Garden became the iPhone. It worked on a few levels; The Apple of knowledge is literally an Apple iPhone. All of the worlds information is accessible through this tiny box we carry around. It’s both a blessing and a curse. We have infinite knowledge of the world now, but we are more cut off from what is happening within. An iPhone is mundane, but it’s such an integral part of our body now, like eyes, ears, or mouth, it just made sense to include it.

What do you think is the effect when the viewer notices iPhone painted on the canvas and how does this differ from your works that do not include an iPhone?

RS: I think any viewer can immediately relate to the image of the iPhone. A phone is about as commonplace as it gets at this point. It’s another experience all of humanity shares in: birth, eating, sex, death, smart phones. That was another reason to include them in the work – my intention is to make paintings that effect the viewer on an instinctual level and grabbing our phones or logging on to our computers is the most basic instinct now. I also acknowledge that 99% of people experience my work primarily on their tiny phone screen, and I accept that. But in terms of the paintings themselves, maybe the inclusion of the phone is kind of like breaking the 4th wall. They are an immediate access point for the viewer because they can immediately relate to the act of snapping a photo of a beautiful experience, googling something, checking an email. These mundane shared experiences are a constant throughout the average person’s day, and maybe they are beautiful for that reason.

What do you want viewers to walk away from these works with?

RS: A feeling of being a human being in the world. 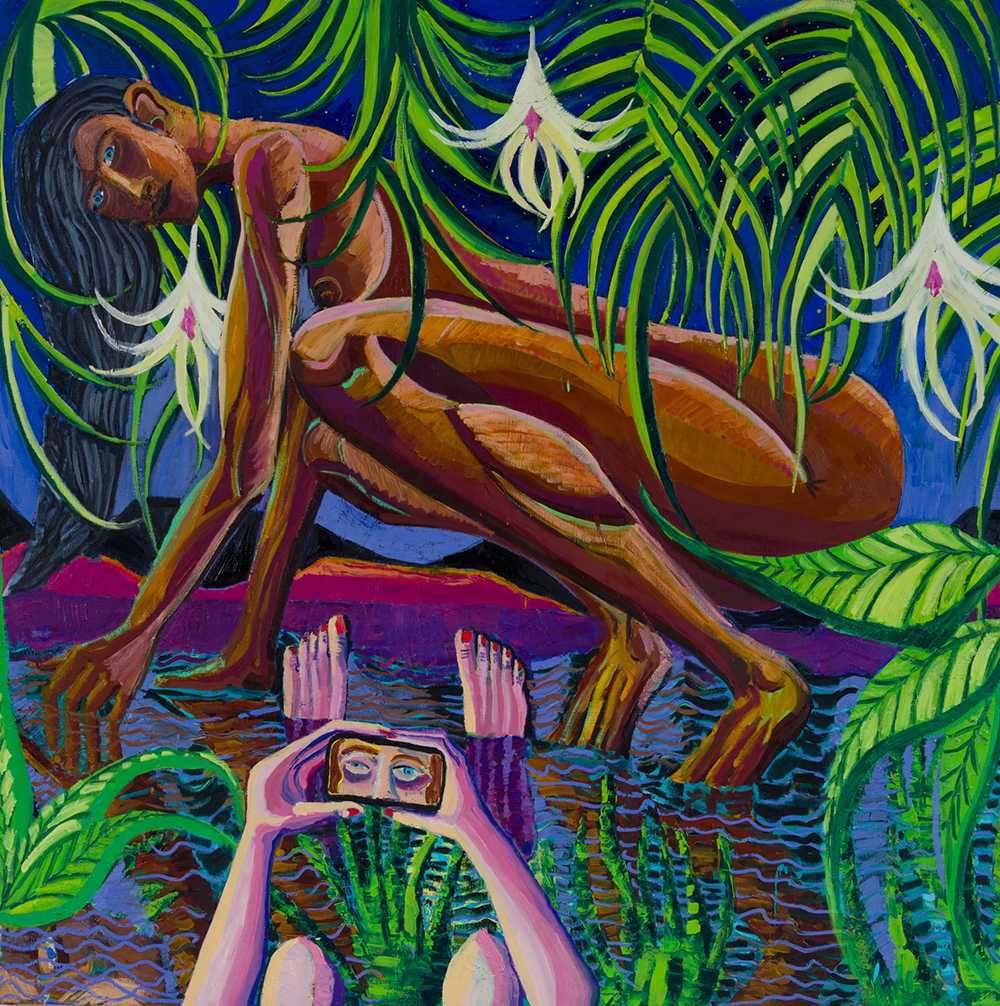 RS: I am excited to take a road trip with my dad this spring to see the wildflower bloom in Death Valley. It’ll be a first for both of us.