Growing up somewhat of an outcast in the, what some could say, superficial city of Los Angeles, Samantha Rosenwald has learned to rely on humor as a shield, socially. Samantha uses colored pencil, mostly making paintings on canvas, to make work about the conflicts and rapport between anxiety and comedy, and success and failure. Rosenwald (b. 1994, Los Angeles) received her BA in Art History from Vassar College in 2016 and her MFA in Fine Art from California College of the Arts in 2018. Rosenwald has shown with galleries such as Good Mother Gallery, CULT Exhibitions, and PS8, and has been featured in magazines such as VoyageLA, New American Paintings, and Art Maze Mag. 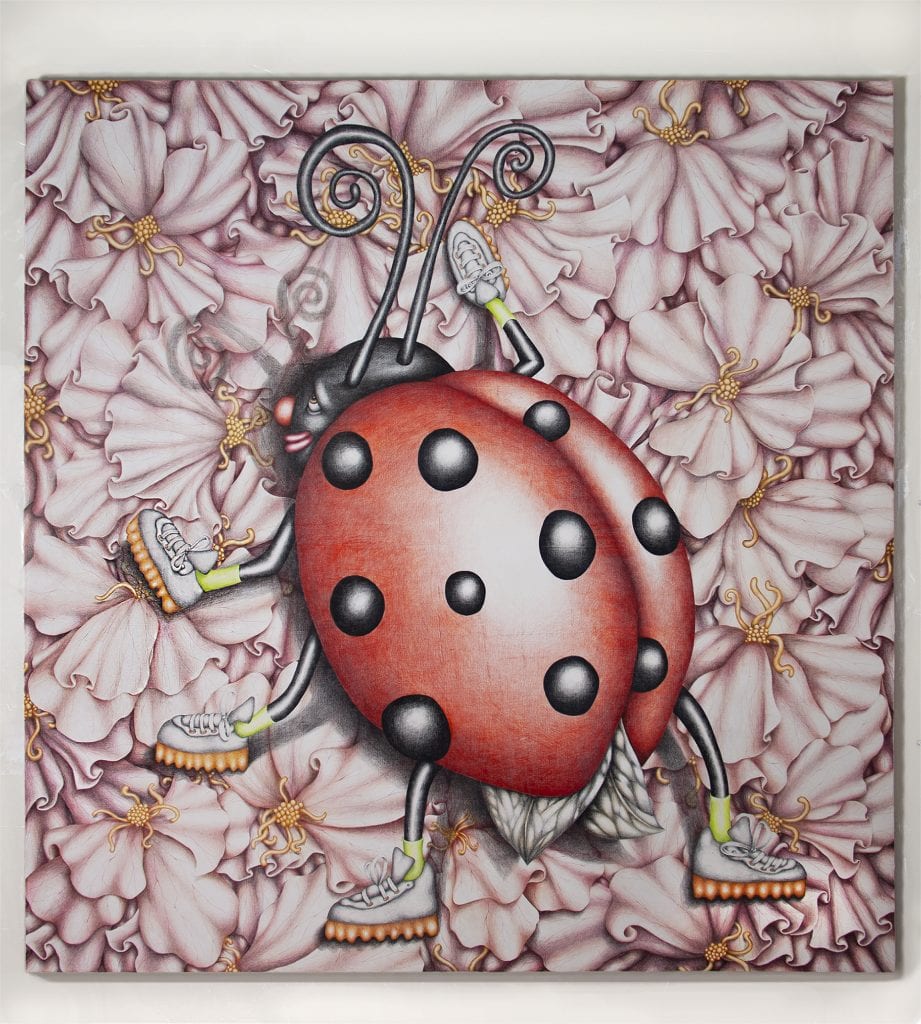 I was born and raised in LA, and I think growing up in such a vanity-centric juice cleanse namaste environment has really influenced the way I think about myself and the way I make art. I was always a comedian, and I guess, psychoanalyzing my childhood, I’d say that was in part a defense mechanism against the social pressure to be pretty and perfect and polite. But going all the way back, I’ve been making art and making jokes for as long as I can remember. I specifically remember making a whole series of drawings when I was around 4 that featured bunnies enshrined by a spiraling trail of their own shit. I think that sums up my childhood pretty succinctly.

Yes and no. I’ve always been interested in the dichotomy between funny and manic, and that has definitely taken on different forms in my work through the years. In the past, I was focusing more on the Petra Collins-esque one-two punch of showing a woman in vulnerable yet “unladylike” compositions — like shaving her body hair, picking her nose, etc. Currently, I’ve been thinking about comedy, zaniness, anxiety, and the understanding of women throughout history in maybe a more veiled manner, talking around these motifs in a visual language of allegory, existing and made-up symbolism, and puns. I think the partially encrypted message that lies behind these less straightforward compositions give the subject matter more space to exist and breathe and evoke the many layers of emotions, experiences, and concepts I’m thinking about when I make them.

I love being in my studio, it’s my favorite thing to be doing. If I have the whole day to work on my paintings, I’ll usually wake up, make a list of things I want to get done that day, get some coffee and a bagel and get started. I’ll usually keep tv playing in the background on my laptop; right now I’m really into The Great British Bake Off haha. The contestants are all so polite and all making such cute desserts, it sets a really comforting vibe for me. My work is primarily colored pencil on canvas, which also brings me comfort, even though the process can, at times, be tedious and time consuming. I’ve been using colored pencils since I was a child, so the medium brings me back to being a goofy, constantly drawing little kid. Once I finish my coffee, I’ll probably move onto a White Claw and some lunch. I’ll then continue with the White Claws and the coloring until I and/or my hands get tired. 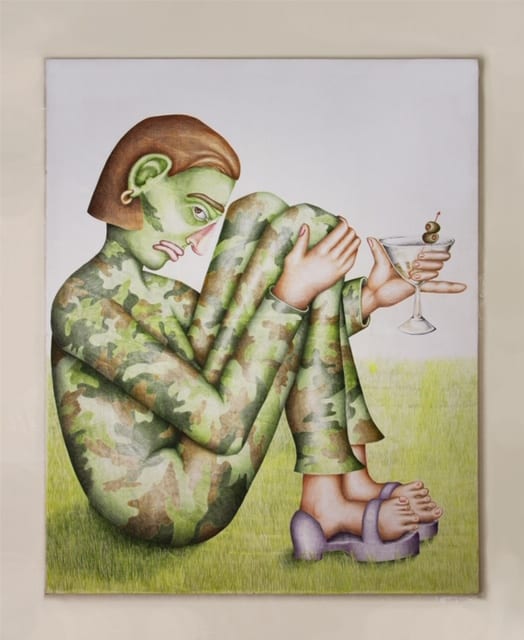 From a lot of places. I was an art history major in college, so I’m always looking back to the history of art as a recipient of mimicry and/or mockery. I’m also really inspired by fashion — not only for the contemporary styles and patterns and trends, but also as a force of social governance. It’s interesting and kind of scary to me that trends have this crazy power over people, can cause violence, and often have such acutely memetic associations: brands like Thrasher, Balenciaga, Supreme, they carry these immediate and ineffable social implications, stereotypes, and biases. Fashion is definitely a really affective tool in my art for those reasons. I’m also inspired by comedy. In a way, I think of my paintings as a very dissociative and manic stand-up routine. I try to hit the punchlines, gags, non sequiturs, and the pregnant pauses of my visual jokes and ideas with the cadence and balance of a wry comedian. 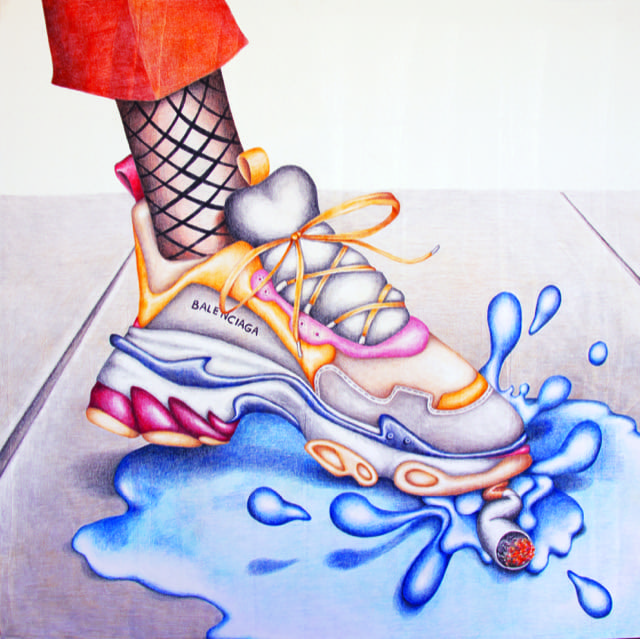 Most of the compositions I create are loosely based on art historical tropes, dreams, plays on words, and objects I think of or see that I find meaningful or funny. I try not to rely on source material too much, except if I’m directly quoting a painting or work of art. Most of the time, if I want to draw a bee, for example, I’ll look at a picture of a bee, but then I’ll put it away so my drawing turns into a weirder more surreal conception of a bee. The source material that I do use typically comes from gothic, ancient Roman, or Renaissance art. Those are the genres that are most commonly thought of as the greatest art historical genres so they’re absolutely loaded and perfect for sarcastically riffing on.

As I’ve mentioned, yes a ton. I think the art history we learn or see the most is so full of associations of perfection, virtue, and male power over a female muse. The words “art history,” especially to those who have never really studied it, immediately bring to mind the Italian Renaissance. Because the art of the Renaissance is so ubiquitously revered as this skillful, ornate pinnacle of fine art, it provides really rich fodder to the manifestation of the cynical and parodic compositions I make. In addition to the Italian Renaissance, I’m also thinking a lot about the Dutch Renaissance. The colors, the clay-like figuration, and the heavy application of parables and proverbs are all so weird and amazing. I also like to reference ancient Roman art, ancient Egyptian art, and contemporary art, among many other movements and genres. 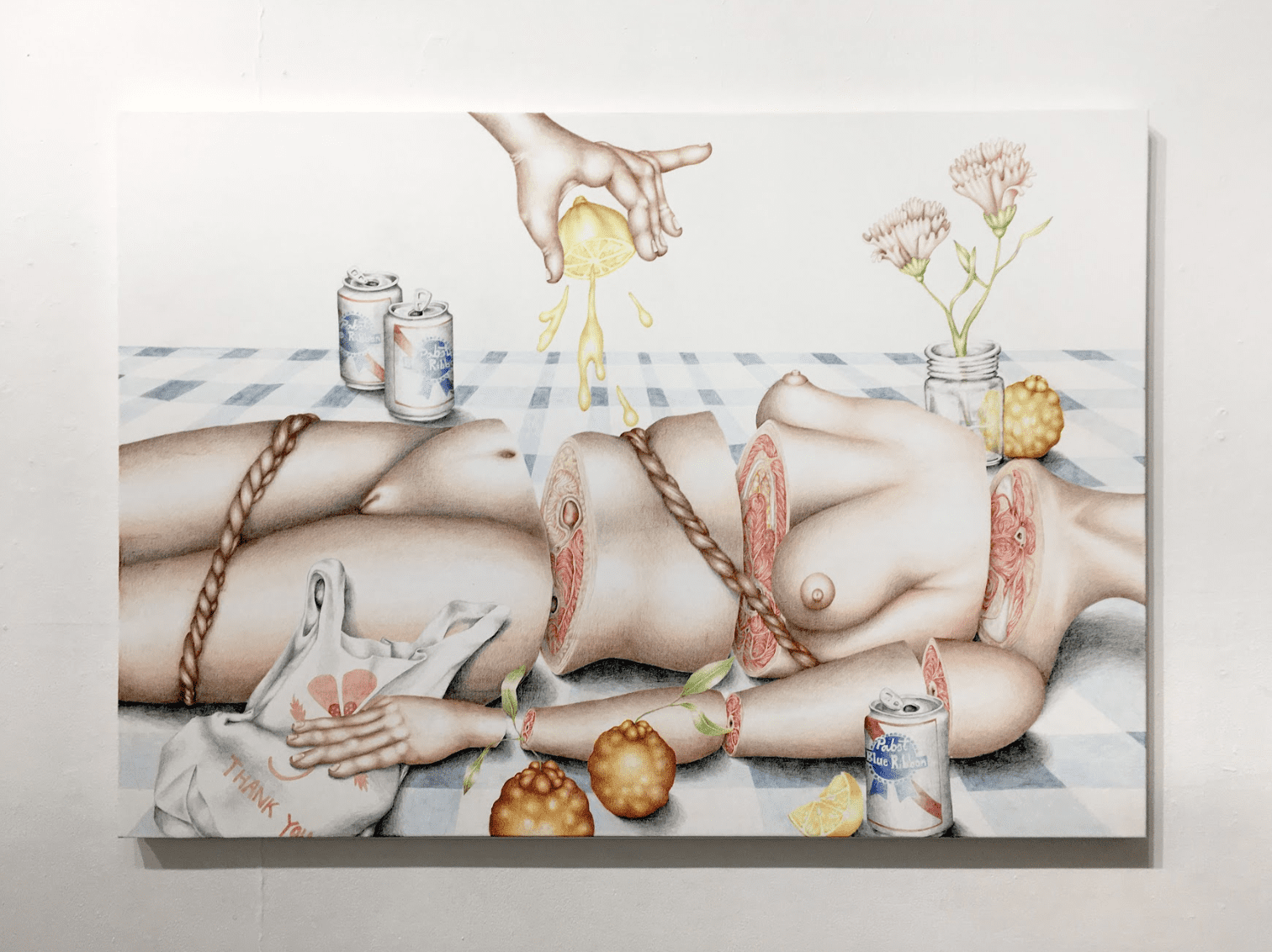 I would love for you to take a look at the work of my very cool and talented boyfriend, Ben Quinn. His work is almost exactly opposite from mine, and is rich with existentialism, the hollowness of the tangible world, and post-psychedelic musings on the plasticity between our reality and other incorporeal or metaphysical realities.