There are few young artists as daring as Sara Anstis. With a BFA in Studio Art and Sociology from Concordia University (Montreal, Canada), an MFA from Akademin Valand (Gothenburg, Sweden), and having recently completed the Royal Drawing School’s postgraduate program (London, UK), she showcases her knack for form and imagination in each of her unique canvasses. She explores female sexuality and nature, punctuating her works with piercing gazes of slightly blurred, abstract figures. Common themes include these undulating nude figures as well as soft landscapes achieved through her skillful use of pastels. Rather than shirk away from sexual desire, Anstis embraces it and encourages her viewers to do the same. Look out for her at Fabian Lang in Zurich in February, 2020. 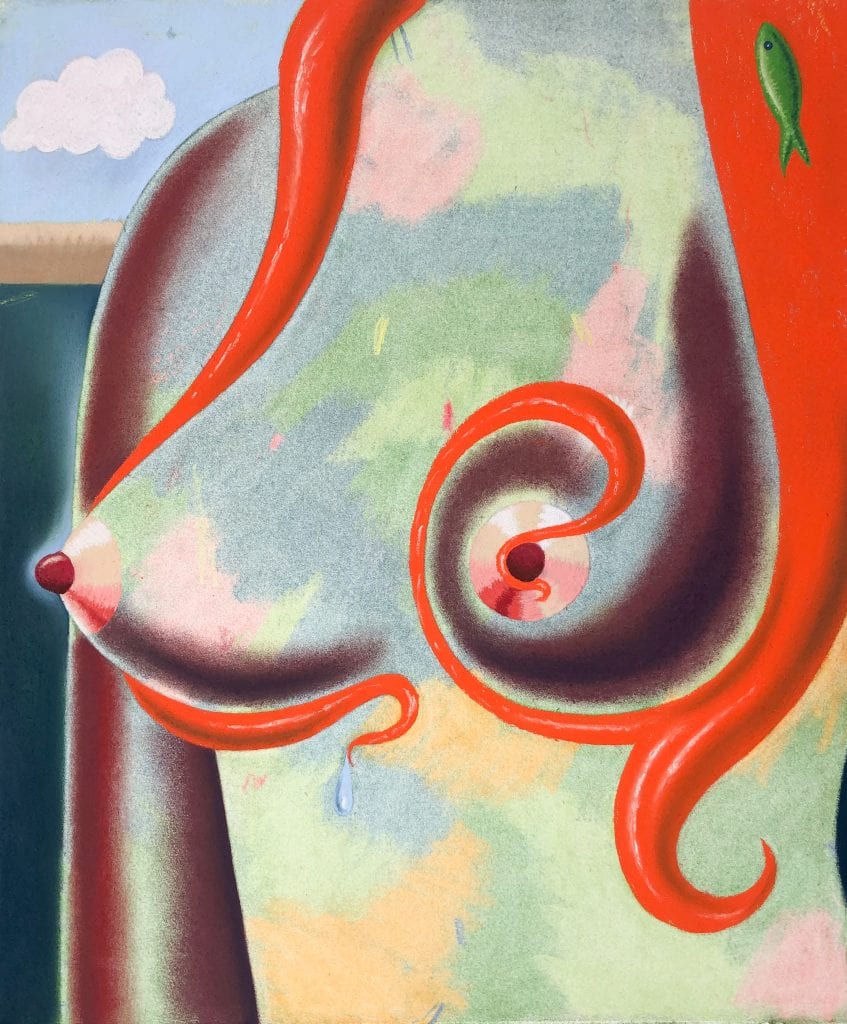 I’m from Canada and Sweden. I don’t know when art entered my life, but my conception of it changes all the time and it enters and leaves when it wants, like a pussycat.

It seems that ocean or water scenes are a common theme in your work as well as the female body. Could you elaborate on that?

I went swimming in California this summer with my partner and some friends. When we arrived at the carpark, someone told us that there was a body in the river. A parent had drowned while rescuing their young child from the water. Their body would be recovered later that day, but in the meantime, they advised us not to go down-river.

We headed up the river to the nudist section. A naked man with long brown hair lay on the rocks and changed position every few hours between swims, an exhibitionist well-practiced in the art of posing. A group of women were sitting in the water like a circle of nymphs. We spent the day sun-bathing and swimming, feeling the strong currents of the water, how it could pin you to a boulder and kill you if you made a series of ill-informed decisions. These beautiful hours were made more beautiful by fear.

I grew up on an island and spent a lot of time in the sea and in lakes. Skinny-dipping features heavily in my childhood and teenage memories and I can’t separate water from my sexuality. I am not a great swimmer and I was always scared to swim far out in the ocean, for fear of what may lie in its tentacular depths.

Water spirits, sea foam and semen, Naiads, arriving newly born at the sea-shore in a scallop shell; Ceto, Scylla. We are slowly coming to know the oceans in a different way, as they lap at houses with unprecedented familiarly. 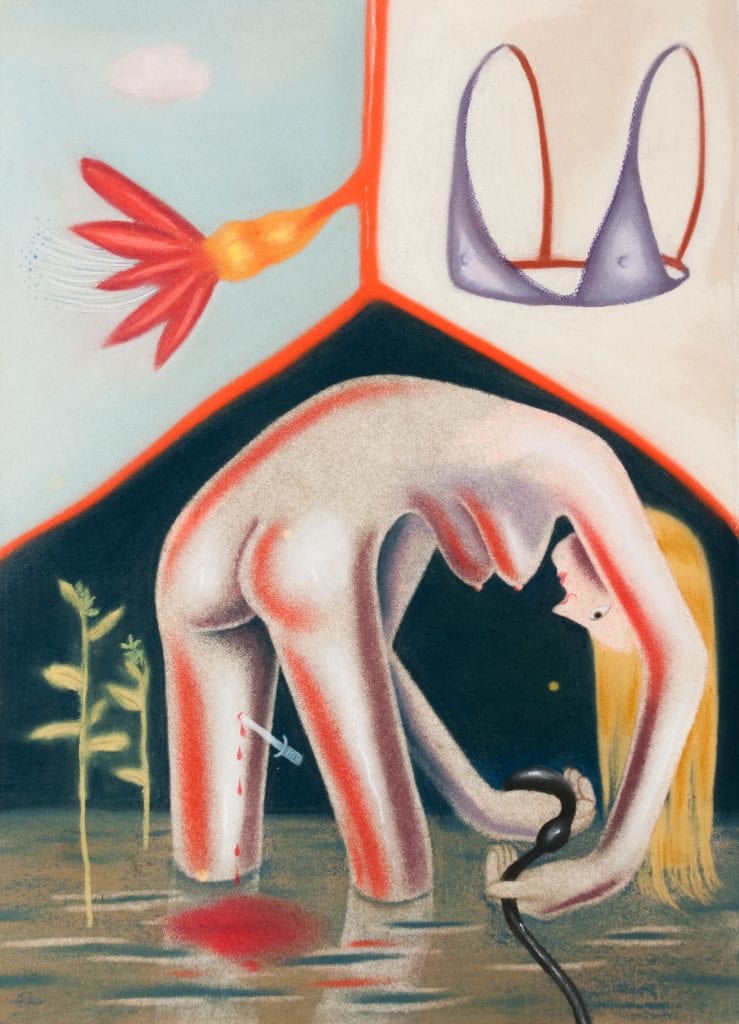 Are there specific historical artists or movements you are drawn to that you could speak on?

Someone recently sent me Arnold Böcklin’s paintings of mermaids. They blew me away. John William Waterhouse’s painting “A Mermaid” from 1900 has also been a recent strike of lightning. She’s a gritty moist-eyed doll. I’m on a mermaid kick.

A manatee or a beluga, from a certain angle and with a certain rippling of fat and flesh, can appear feminine. Sea creatures are so other-worldly that they have been mistaken for women. The characters I paint are increasingly of the water: they have slick, smooth skin, the way you’d think a dolphin’s skin would feel. They are willful and their pussies are usually the most reflective part of their bodies. As a child I loved a book about a fish who had one shiny scale. They made this one scale sparkly on every page and I wanted to rip it out, but I wasn’t sure what I would do with it after that. Now I’m making sparkly things and it’s way more rewarding than owning them.

I have also been revisiting John Bauer’s illustrations. Coincidentally, he tragically drowned with his wife and child in a ferry accident on a lake in Sweden. He made beautiful illustrations for Agneta and the Sea King, a story in which a woman is lured into the sea by the Sea King. 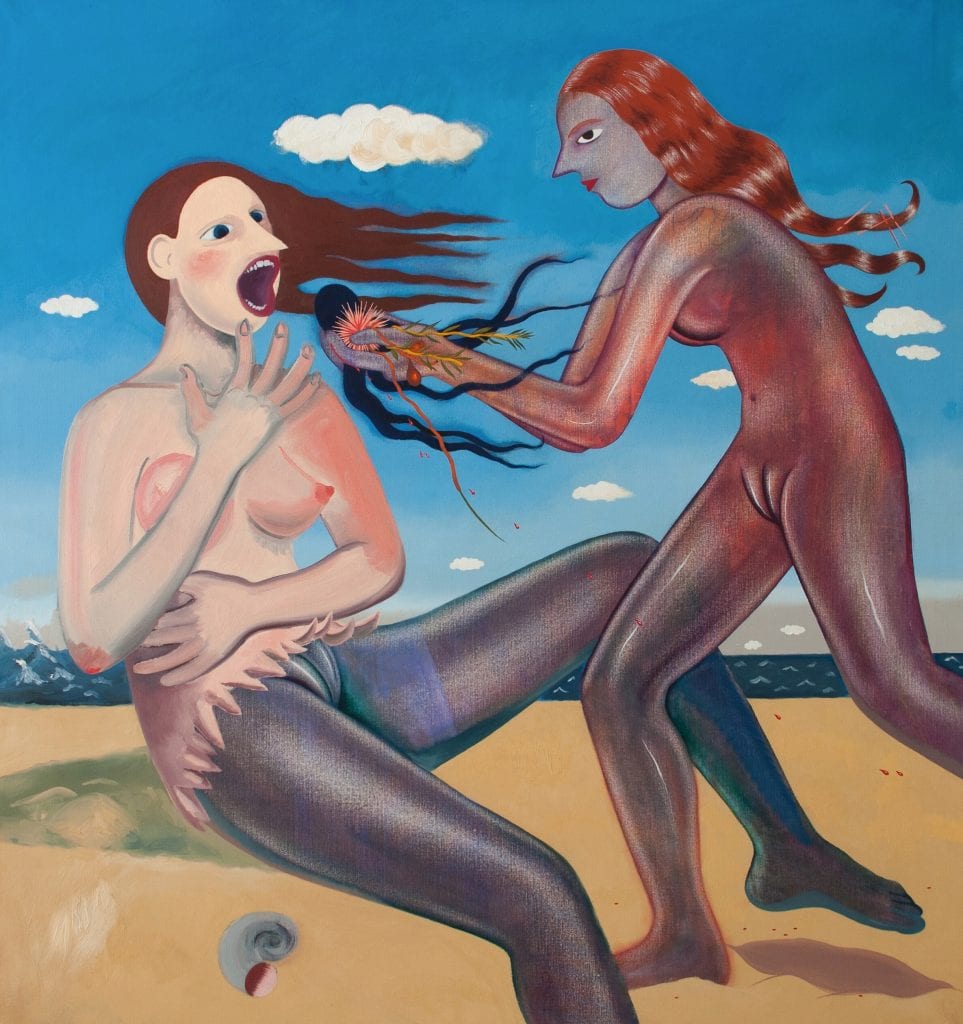 I spend the day telling myself I have a routine. I have tea now, and take a break between 16:00 and 18:00, and wash my hands when they get too dirty. I hide my phone from view. I listen to music that makes sense in relation to the work I’m making. But I’m terrible at making rules for myself so this all falls apart. Each day is different and I just try to get some work done. 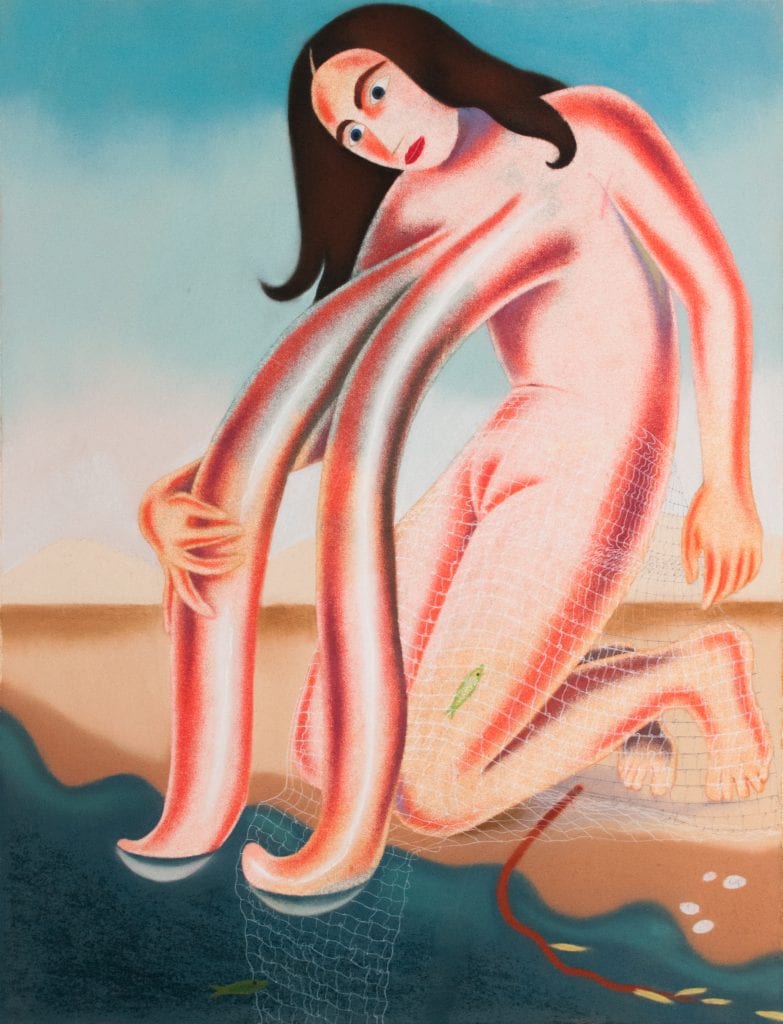 Usually I come up with an idea when I first start, a gesture, or the angle of a shoulder for example, and go from there.

I went through a phase of pushing away drawing and painting to see what else I could do, but it was always really drawing and painting, even when I was writing or performing. I made monochrome, cross-hatched meticulous drawings for a long period of time before doing what I do now. 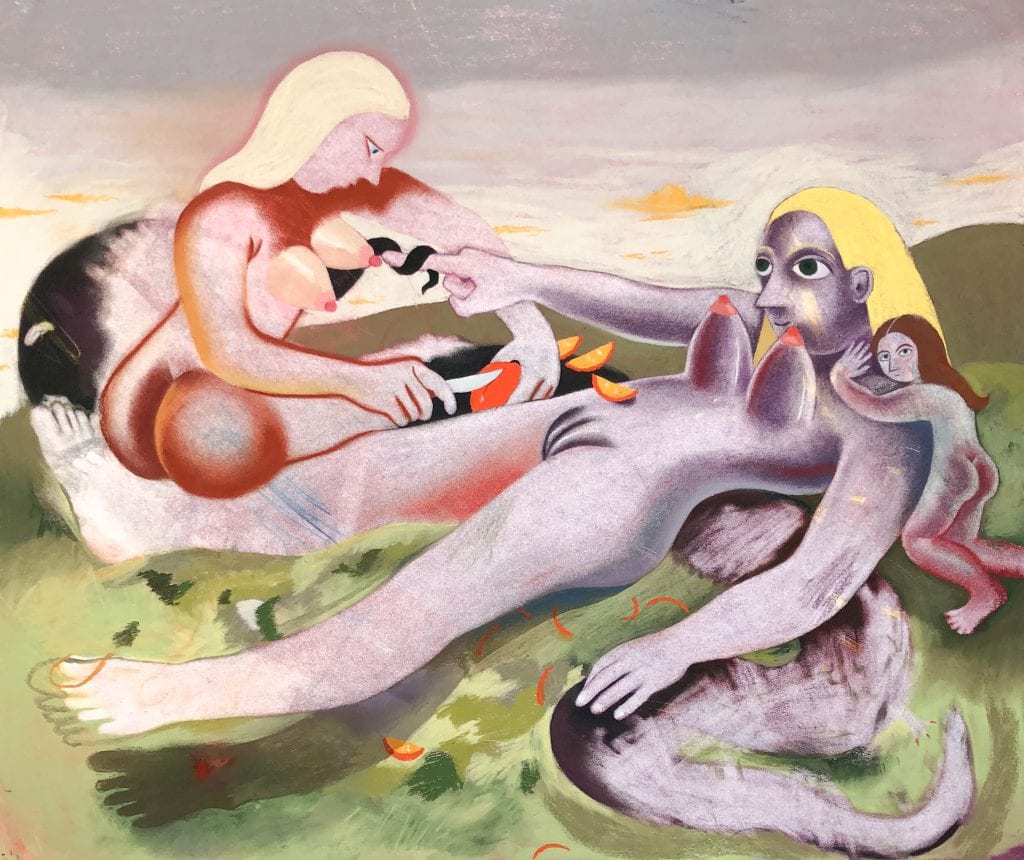 It seems that you have used multiple materials (pastel, charcoal, casein, etc.) in your works. Do you have a preferred material, and how did you come to use these different mediums?

I adore soft pastels. They are so luscious and vibrant. I started using them because they looked good in their little shelves in the art store. I prefer Unison pastels, which are handmade in the UK, Sennelier for when I need something with less resistance, and Rembrandt when I need more resistance. Oil and casein paints are more recent additions to my materials. I love that casein is made from milk protein, that it comes from what feeds young mammals. I have many nipples in my work and it feels appropriate. Milk paint has a long history and it smells really good, like a hand cream or a lipstick.

How do you come to title your works?

Titles either come or they don’t. When a piece is finished, if a title hasn’t come up, it probably never will. Or I end up giving it a name and the title and the work need to figure out how to grow into each other independently of me.

Could you also talk a bit about the “Survival Handbook?” How did you get involved in the project, and what it was like being an editor versus being a contributing artist?

I was the editor and a contributor for that project. The “Survival Handbook” publication was for an exhibition I co-curated called “I Will Survive” that was hosted by Galleri CC and Alta Art Space in Malmö, Sweden. I invited artists who worked with the theme of survival to be in the exhibition and write or design a chapter for the publication. It was empowering to be in a dual role and to collaborate with these artists. I would love to put together a similar text-based project in collaboration with an organization. 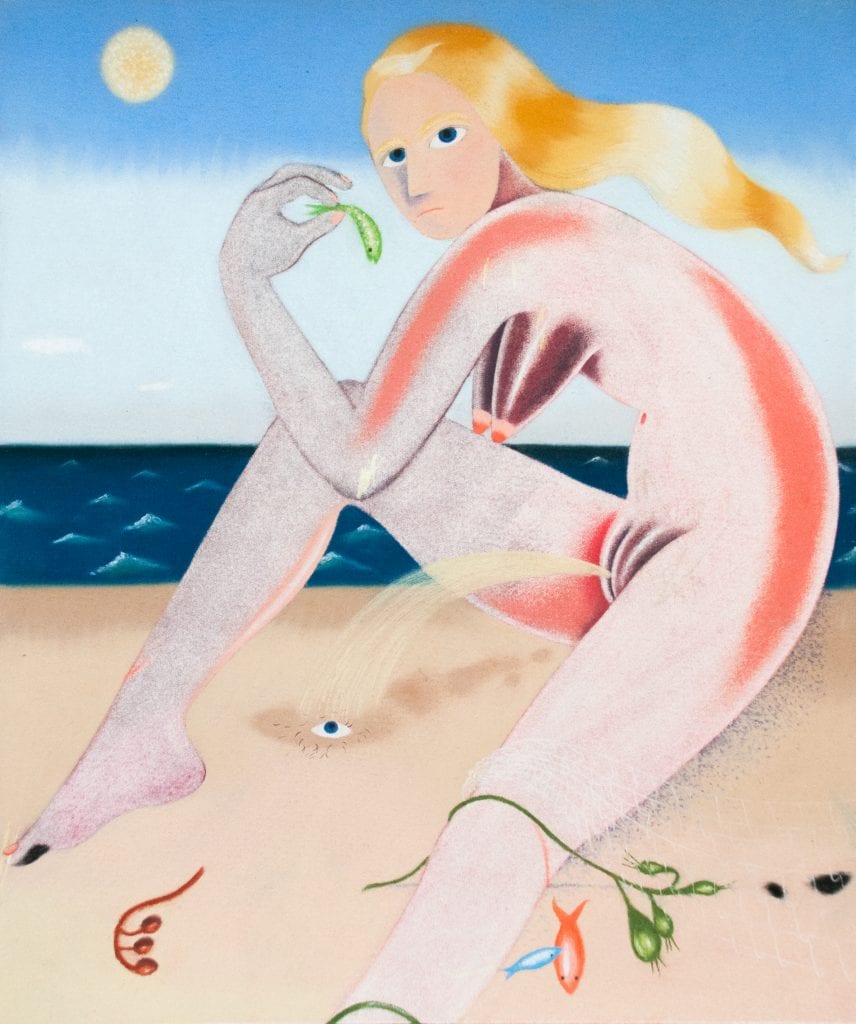 My next exhibition is a two-person show at my representing gallery, Fabian Lang in Zurich, with the painter Neal Tait. I will be showing a new body of work. This will open in early February 2020 and I’m really looking forward to seeing it come together in the physical space. 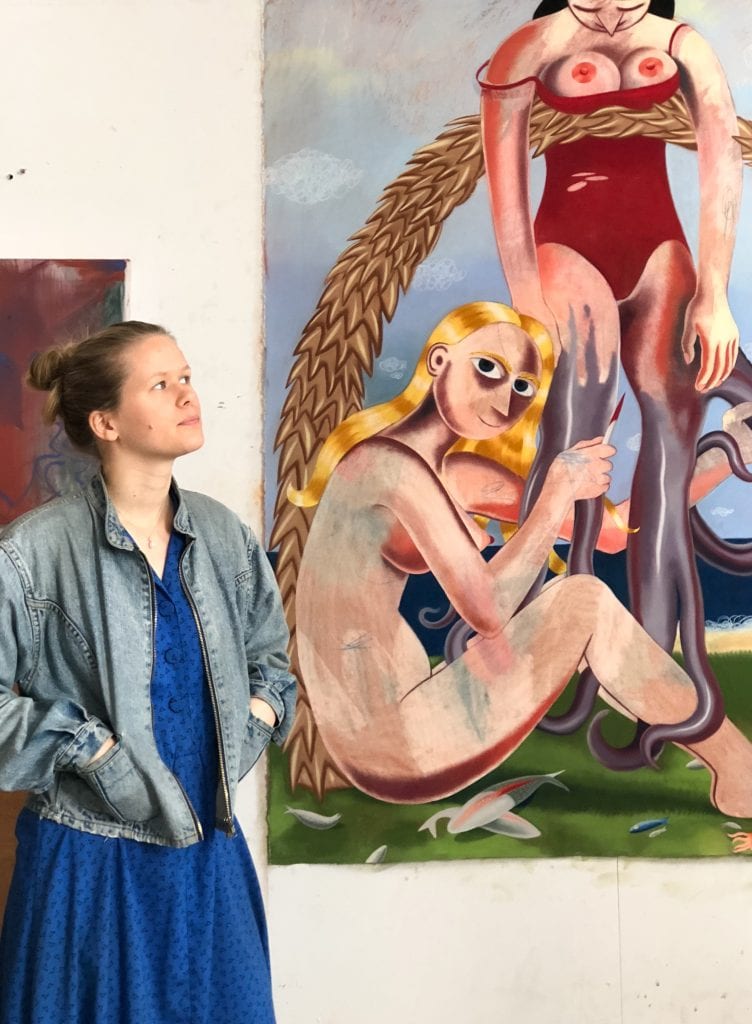