Sarah Tortora’s sculptures are as physically powerful as they are meditative. They are industrial and yet inviting, warm, and alive. In her practice, Tortora works toward undoing the cultural conditioning inherent with physical objects and environments. Though she is currently finishing a year-long staff residency at Vermont Studio Center, Tortora calls Philadelphia home.

You are part of a young generation of female artists hustling and gaining recognition. What does being a part of a strong female community mean for you?

Participation in a strong female community also necessitates participation in a strong intersectional community. It’s about working collaboratively to dismantle defunct frameworks that have historically oppressed certain voices. Sometimes this work isn’t always overt or explicit but can be harnessed and acknowledged by simply creating spaces, gatherings, or parties for people to congregate or build initiatives together, to restructure the terms by which we engage with existing systems in the world.

In academia, in terms of the canons presented to students for consumption, absolutely. In terms of my professional experience, it’s hard to pinpoint when possible instances of discrimination are the cause of underrepresentation, or if this is due to other factors; I was halfway through my undergraduate education during the 2008 recession. Regardless, that cloudiness – “was that sexist, or is it me?” – typifies how sexism and racism successfully operate – subtly, dubiously, institutionally, norm-ally – always riding a denotative line for deliberately difficult deconstruction. All of that said, whether or not I’ve experienced professional underrepresentation, I definitely experience some form of sexual harassment on at least a weekly basis.

I do feel like I see more opportunities geared specifically toward female artists, such as thematic curated and juried exhibitions, residencies, blogs and interviews, such as Ladies Choice. I also see women and trans artists creating beautiful, restorative spaces, which feels necessary and revolutionary. But I don’t see enough structural change from the top. The Me Too movement has not taken off in the art world in the ways that we all know it could, and should. 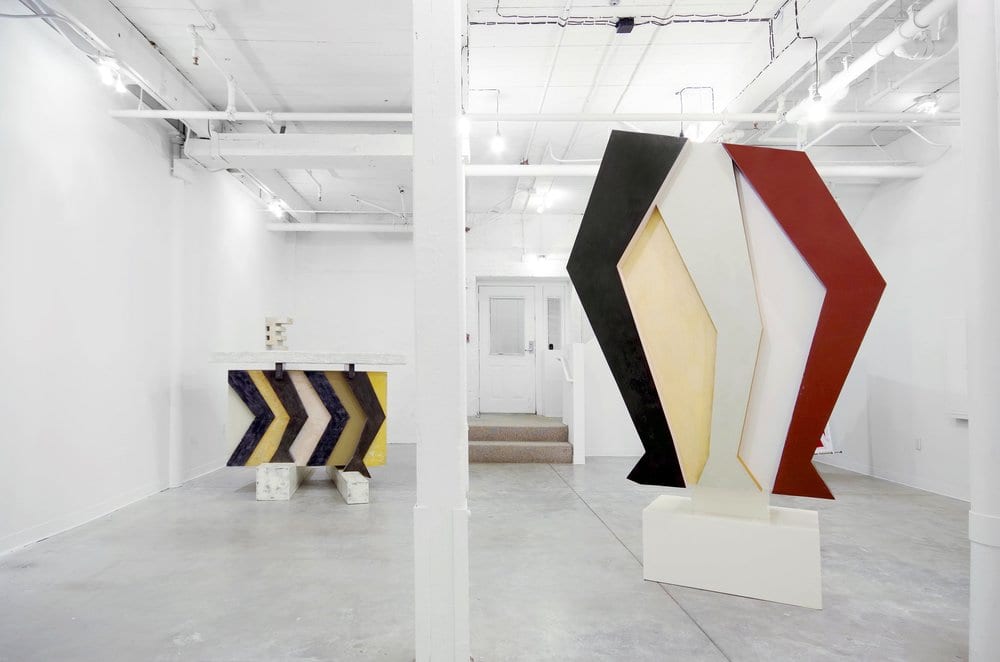 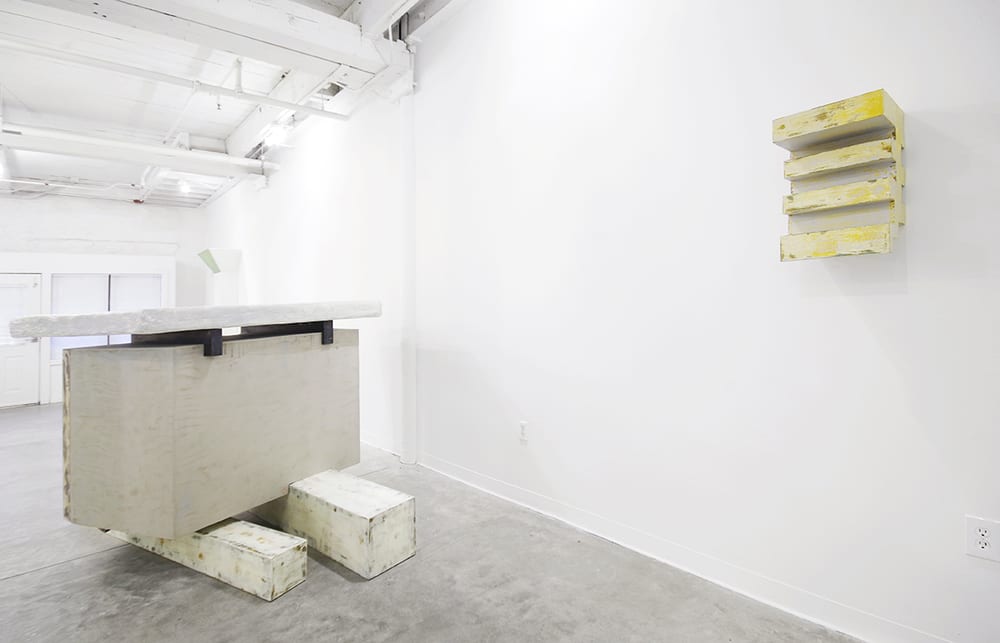 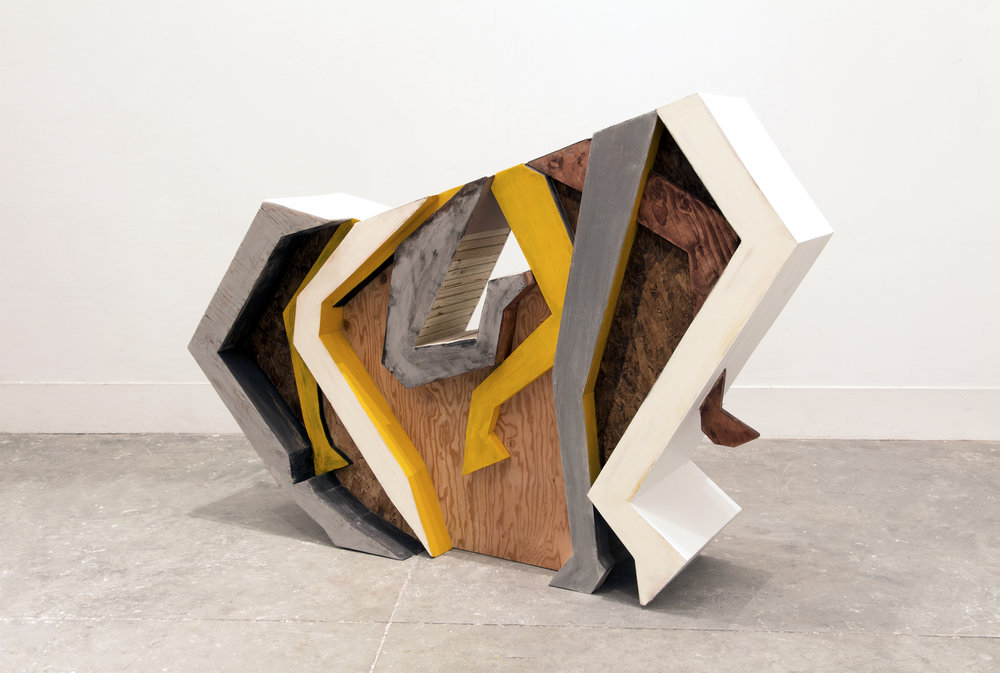 For those unfamiliar with your work, could you briefly explain how you came to sculpture and what you work towards in your practice?

I had always been drawn to the arts, but I started making sculpture in college, primarily through a visceral attraction. I’d never been an athlete or used power tools before and felt challenged by the physical and meditative potential of the medium. There was also a catharsis in its capacity to create spaces and territories; it’s the medium closest to survival. My sculptures, though amalgams of identifiable cultural markers, still operate parallel to language, and are chimeras or textual ciphers that can’t be named outright. One aim of my work is to undo the cultural conditioning assumed with physical objects and environments – while simultaneously re-ascribing a sense of power or conviction in the human hand. My recent work accepts the premise that every equestrian monument is truly a Trojan horse. I’m interested in the breaking ideological conditioning, by creating sculptures that function as ostentatious props or facsimiles of archetypal or Classical objects. This is ultimately done to regenerate empathy for the world, rather than engage with it on sterile or prescriptive terms.

What does creating ‘modern’ sculpture work mean to you?

I don’t think of my sculptures as being Modern so much referencing Modernism. I’m influenced by Modern architecture, furniture, sculpture, and its contemporary preservation and display, as works of this era established many of the residual expectations placed upon sculpture to perform for us within institutions. Modern sculpture is still in-between; its promise is still adolescent, it’s not yet artifact, but it’s no longer teeming with unbounded expressive radicality. In many institutionalized settings, Modern sculptures are cordoned off by rope or glass, given an extra plinth, denied their three-dimensionality, transformed into live images. My sculptures frequently incorporate these pictorial and didactic methods of viewing, by acting on an innate bodily and sociological alignment with “fronts” and “backs” and embedding that into the sculptures themselves. The minimal surfaces may be a psychological mechanism to encourage projection, in a reach for perpetual empathy but failure to truly identify. 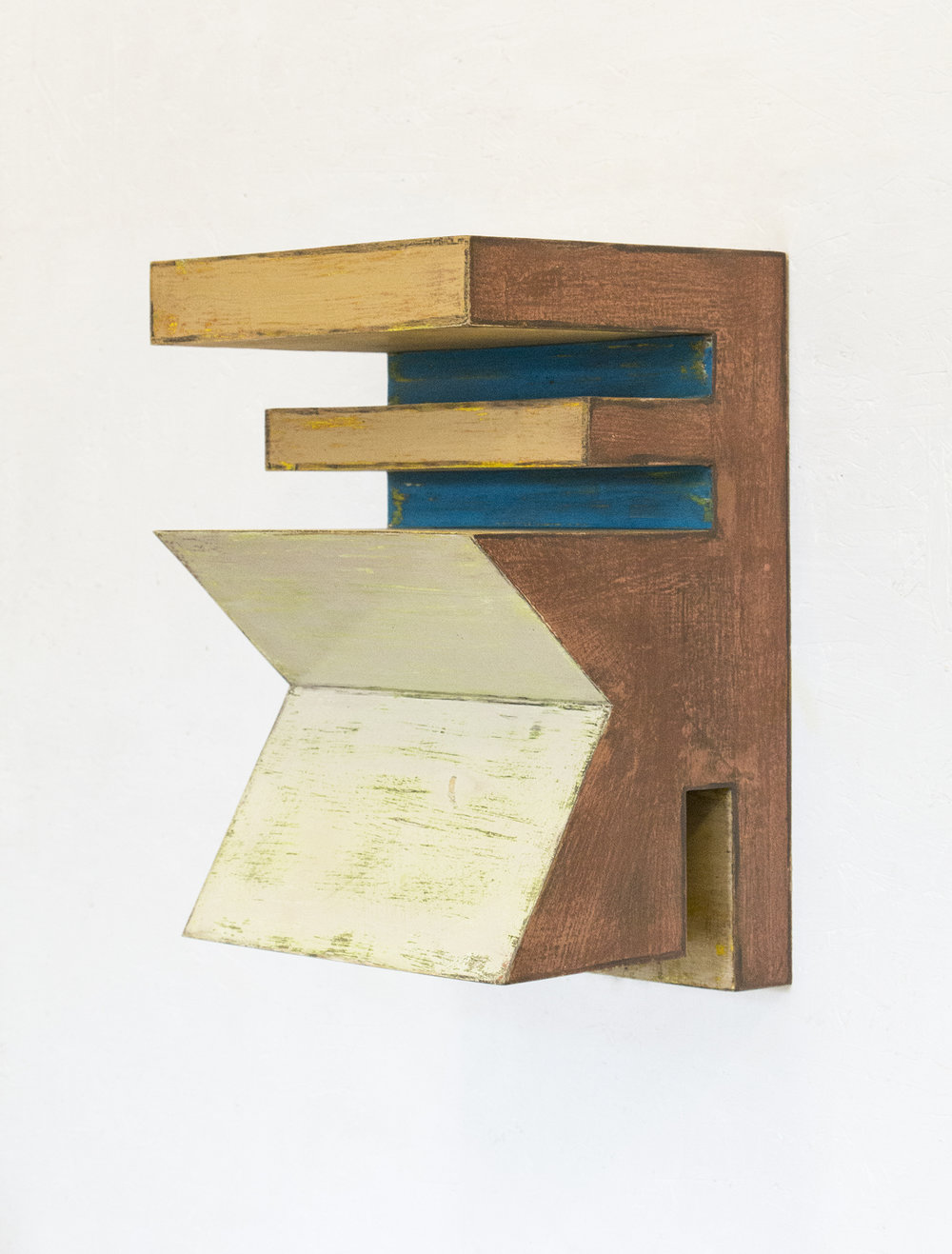 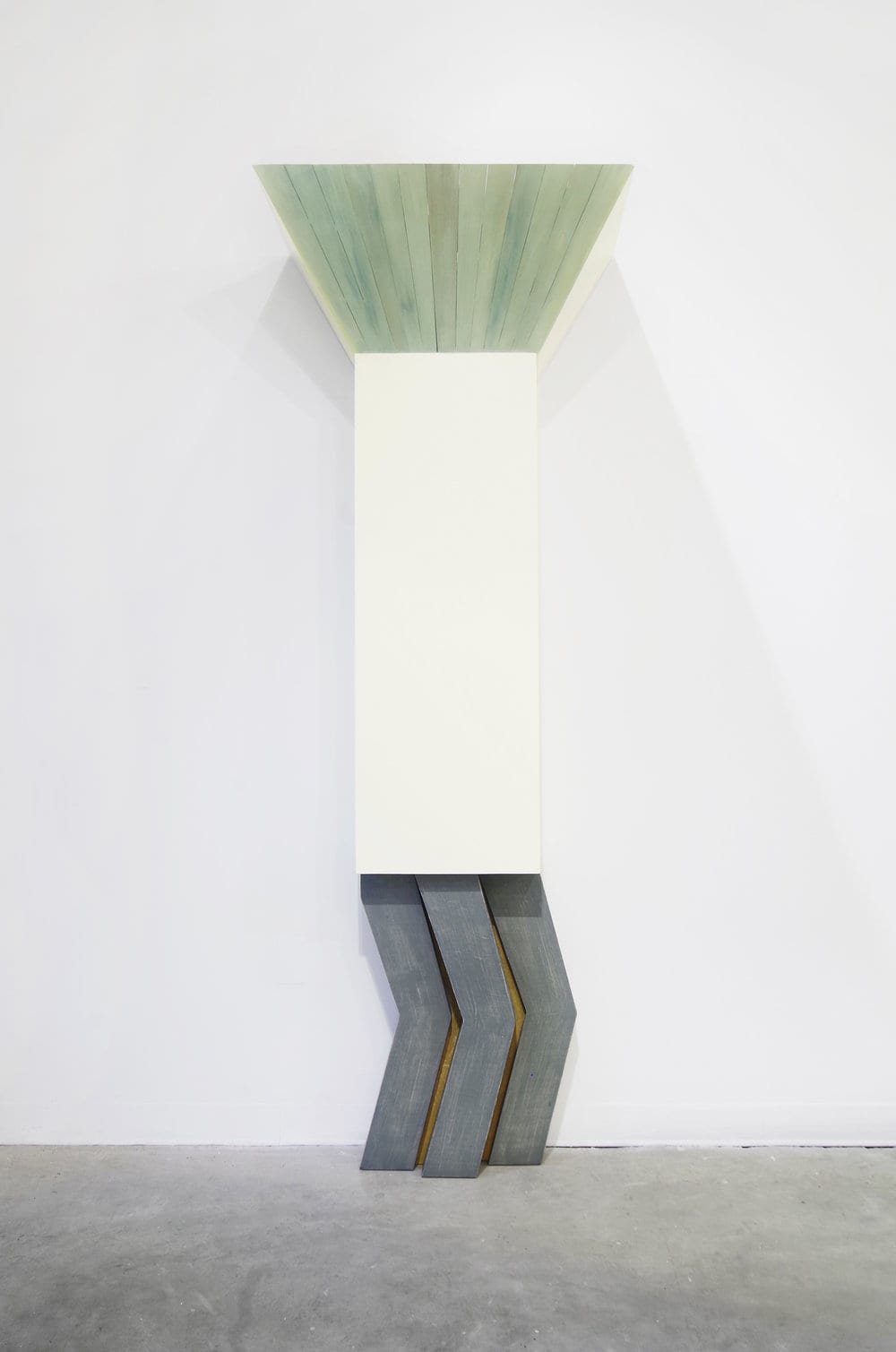 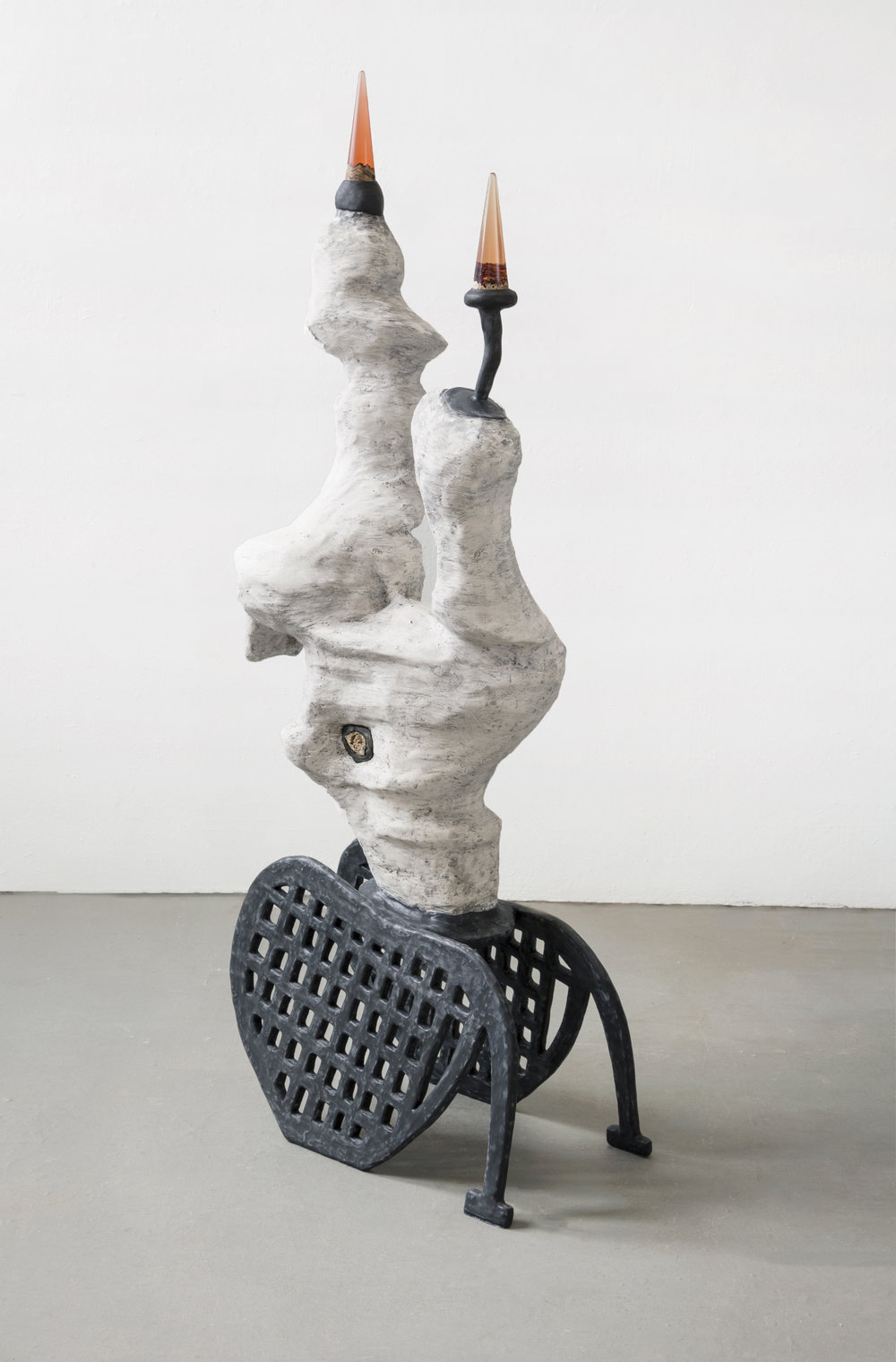 What forms inspire the work you create?

Classical and Modern sculpture/architecture, museological and archeological aesthetics, the seemingly anonymous utilitarian fixtures, markings, and colors of urban environments, OSHA coding, maps, geology, antiquated American domestic spaces (your grandmother’s impeccably maintained 1970’s living room), as well as more effusive phenomena – the transient spaces and fleeting moments where there is evidence of hand-made or hand-altered processes. A kind of high-five from the past. When so much of what we touch on a daily basis is mass produced plastic, any earnest trace of the human hand feels sacred. The imprint of wood grain against a cast cement wall, a crooked screw. I’m drawn to horrifically inefficient but tenderly and lovingly mended objects.

Much of your work has an industrial, raw feel to it. How do you go about achieving this and is there intent behind it?

I think those adjectives are extremely telling and capture an ambiguity or tension central to my work. To me, “industrial” and “raw” are opposites. Industrial conjures Minimalism, precision, standardization. Raw is natural, unruly, warm, alive. They are both there. I think of my work as being “awkward with conviction” – they take seemingly powerful, territorial stances, but they don’t have resolute identities. It’s like proclaiming with utmost certainty and pride, “I don’t know who I am!” They imprint as graphic images, but the closer you look, the more you can detect the ripple in the plywood, the gestural brushstroke, the folds of their skin. 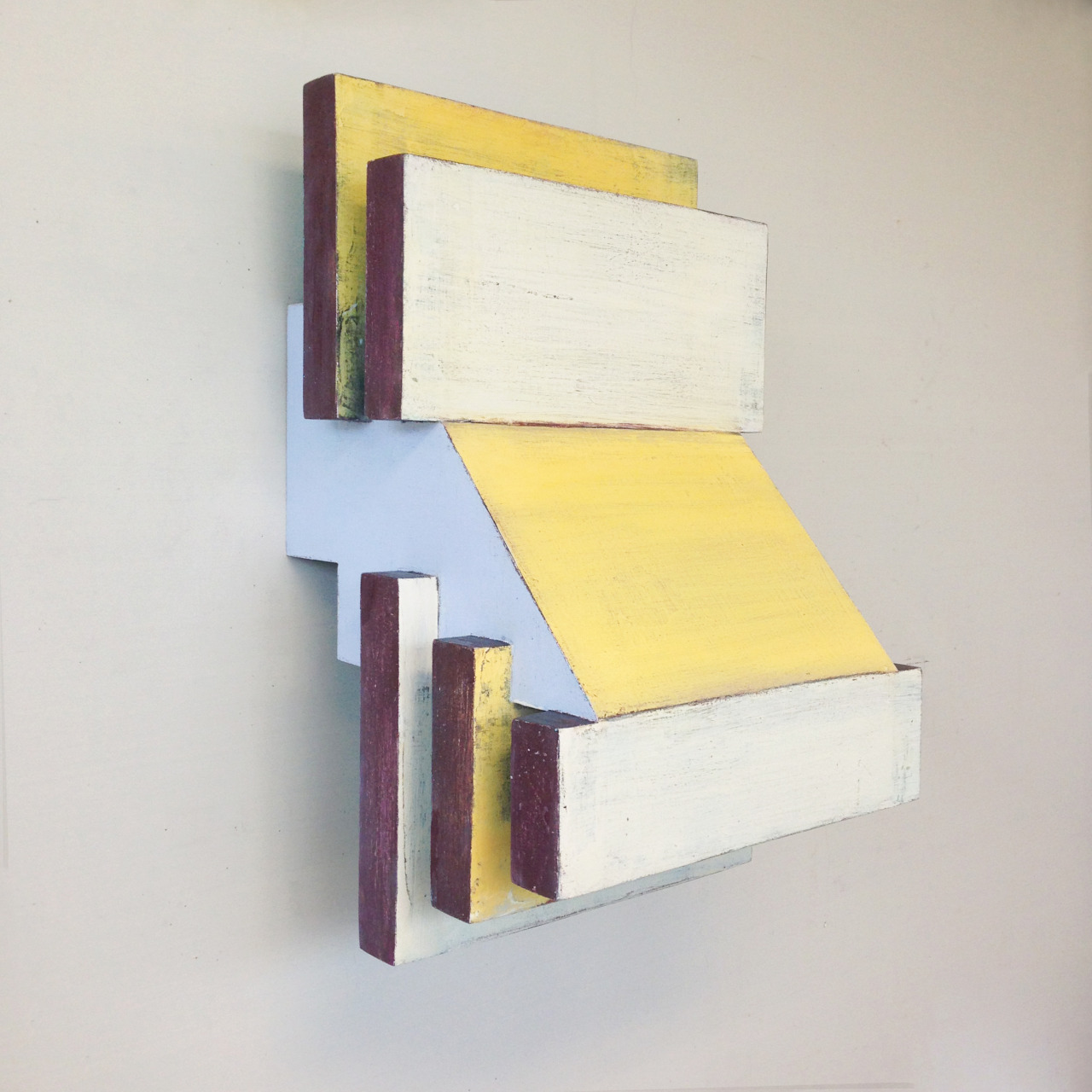 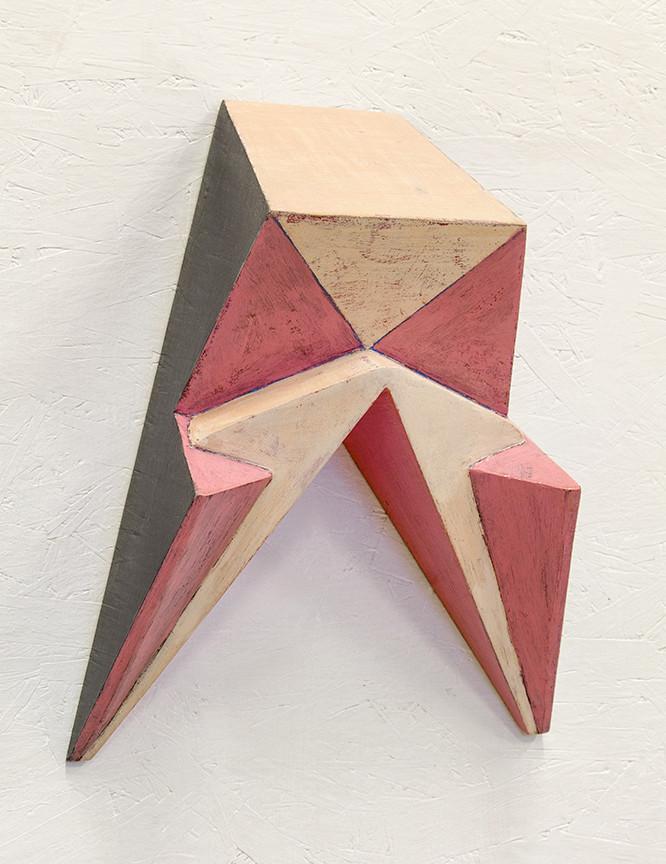 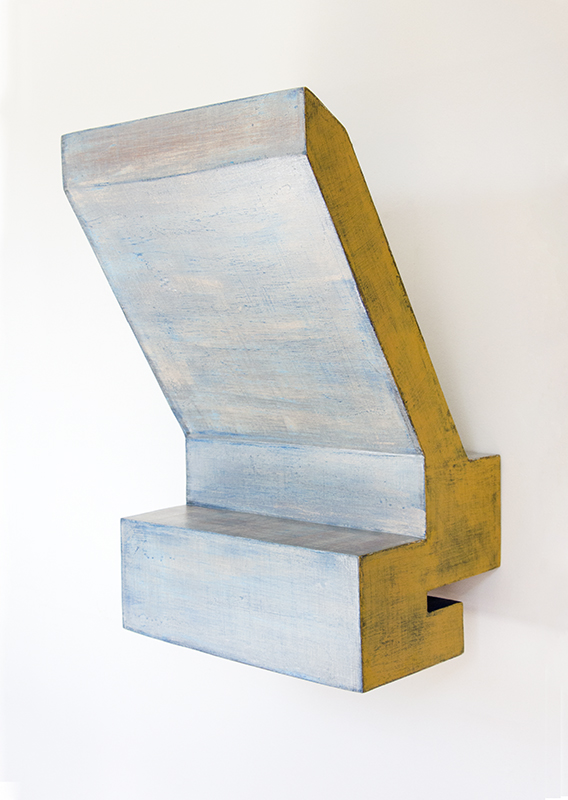 I’m currently finishing a year-long staff residency at Vermont Studio Center. VSC was the first artist residency I attended, for a month in 2012, when I was in graduate school. This staff residency began in late 2017, after I’d been teaching full-time, and had become fatigued by the bureaucracy of higher education. Participating within this perpetually-shifting community and having the opportunity to meet over five hundred artists and writers in a year, helped me to initiate the kinds of community-building interactions with artists I prefer. After this position concludes in October, I will be moving back to Philadelphia. In April of 2019, I’ll be going to Athens, Greece for a month as an artist in residence at the Athena Standards Residency, and I hope to be able to travel a bit more when that concludes.

Kim Faler makes incredible multidisciplinary work that pays homage to the elegant, oft-overlooked, emotional moments of our everyday lives, and I think her work would be great to share!