Shara Hughes paints vibrant, engulfing landscapes with no pre-existing reference. Made-up scenes come to life on her canvases in an intuitive, evolving method of creating. Her process is a multi-step, meticulous exploration between the medium and material that leaves much to be discovered. In recent years, Hughes’s work seems to be everywhere, however, her success did not occur overnight. The artist has been hustling since her days at The Rhode Island School of Design and only found her trademark style of painting in the past five years. Hughes is represented by Rachel Uffner Gallery and Galerie Eva Presenhuber. She lives and works in Brooklyn, NY. 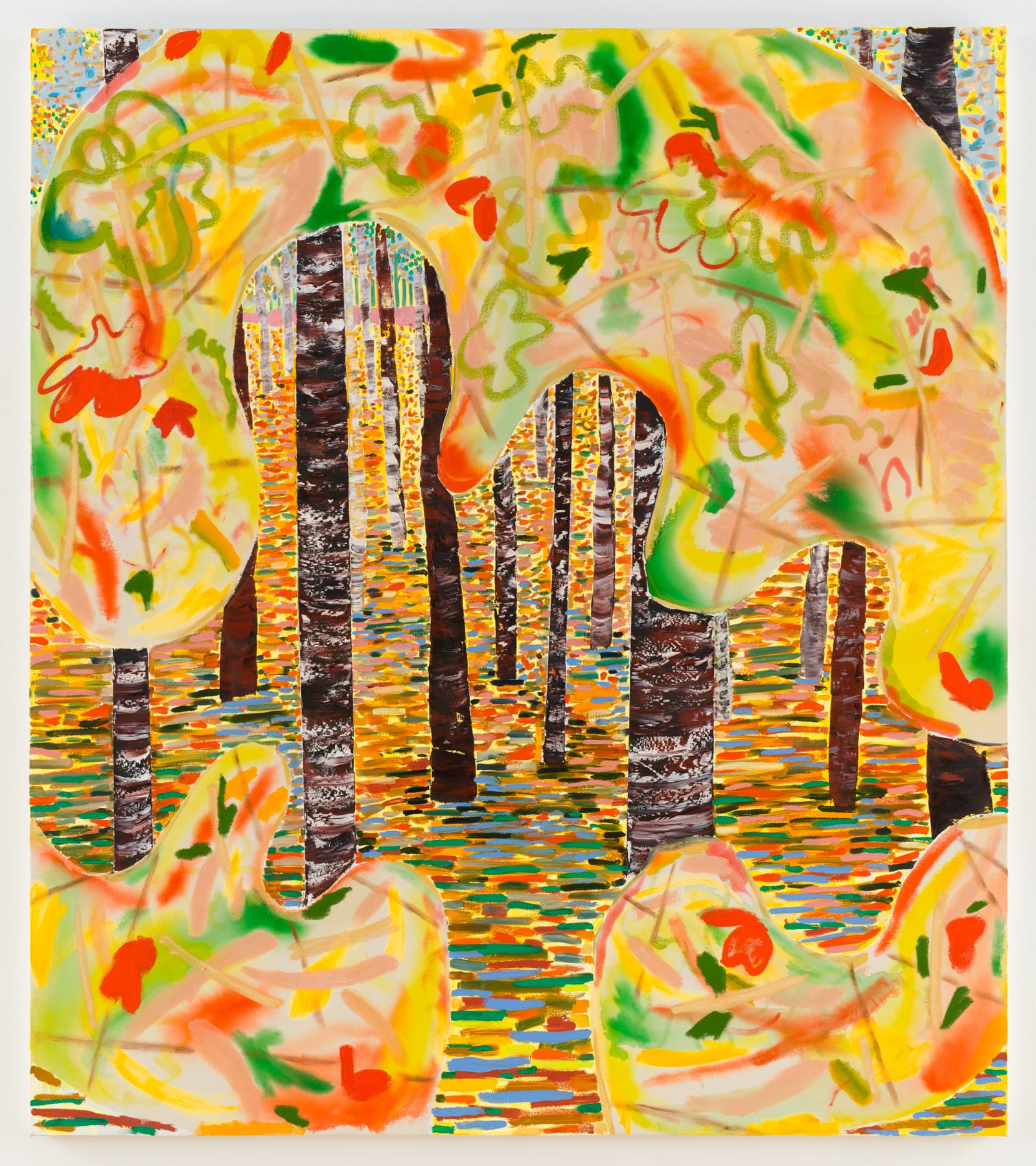 Oof…hard question.  Although there are many women painters that come to mind, I always think of Dana Schutz first.

Of course – I think we have all experienced it over the years. Just take a look at gallery rosters….although I think that is getting better. 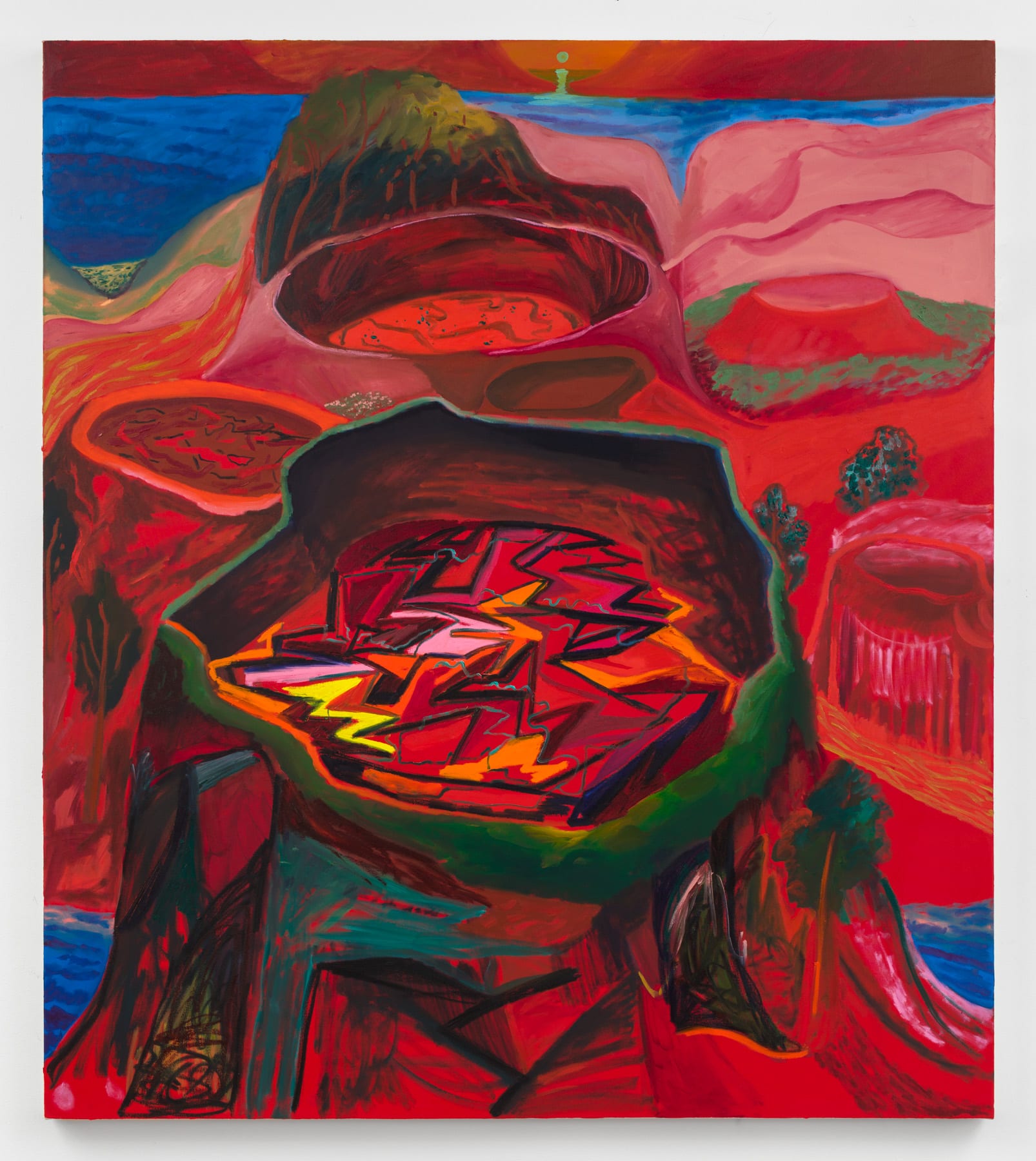 Sure, I guess so. I think the Whitney Biennial had more female artists than before. There is definitely more awareness of how uneven it has been in the past..which is progress.

Moving on to your practice. Has your work always incorporated natural themes?

No. Actually, I’ve only been painting landscapes for the past 5 years. Before then, I was mainly making invented interior spaces that lead more with narratives and symbolism.  I think there is still somewhat of the same themes in the landscapes now, they aren’t just stemming from that, it’s more organic. 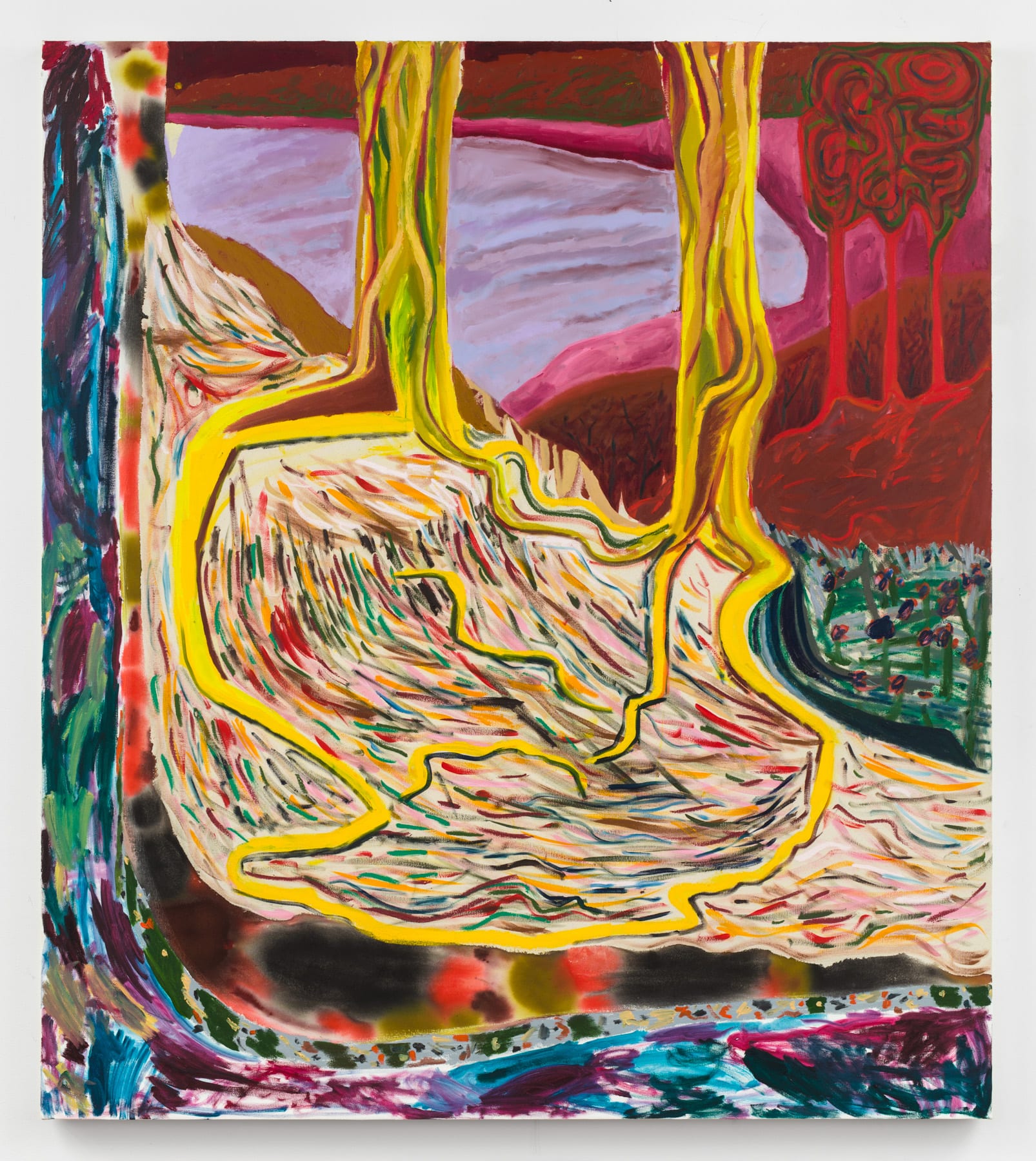 How much of your work is pre-planned vs. intuitive?

It’s about 95% intuitive. I never plan anything nor do I look at landscapes or images to make the landscape paintings. They all come from my imagination and from playing around with materials in ore of a subconscious way. From there I organize and feel out where the painting will take me.

How does working on different scales and with different medium challenge your practice?

In the past year I’ve been able work in a few different scales and mediums that has been surprisingly awesome. I have been used to just painting and drawing for the past few years and haven’t really had an opportunity to expand.  The 70ft mural project I worked on in Boston really opened my eyes to what public art would be able to translate well with my work. I’ve been thinking about other projects in the future that would expand outdoors or into the public.  I also had the opportunity to work with Pace Prints which surprisingly is harder than I remembered.  I figured it would be similar to painting but I was surprised by how different your brain has to think and also how the medium is so different from painting although the result may not look like it’s so different.  One other medium I never thought I would be into was animation. I made a short for the Metropolitan Opera that was about the specific opera Eugene Onegin. I found animation the hardest of all other mediums to work in.  It was super fun to make, but also very frustrating because I don’t like to plan too much and animation is all about the plan. I ended up making a melting ice cream landscape that told a 2 minute story about dying love questioning what lasts forever.

You often incorporate a number of different paints onto the same canvas. What does this variety of material lend itself to in your work? Is there a certain result you are trying to work toward?

I like using various materials because it keeps me moving and changing.  I like that there are some rules between the mediums, but they can also be very flexible. I like being able to put things together that shouldn’t be, or wouldn’t be expected. The combining of materials relates to the subject matter.

Your work has gained a lot of traction in the past five years. What have been some of the most exciting landmark moments that you’ve experienced in your career?

The Whitney Biennial was a great landmark moment for me as my work was able to reach a larger audience than I was used to. It was exciting to have that kind of platform.  I’m working towards a few institution shows in Europe I am excited about as well so hoping to expand the audience to Europe a little more. 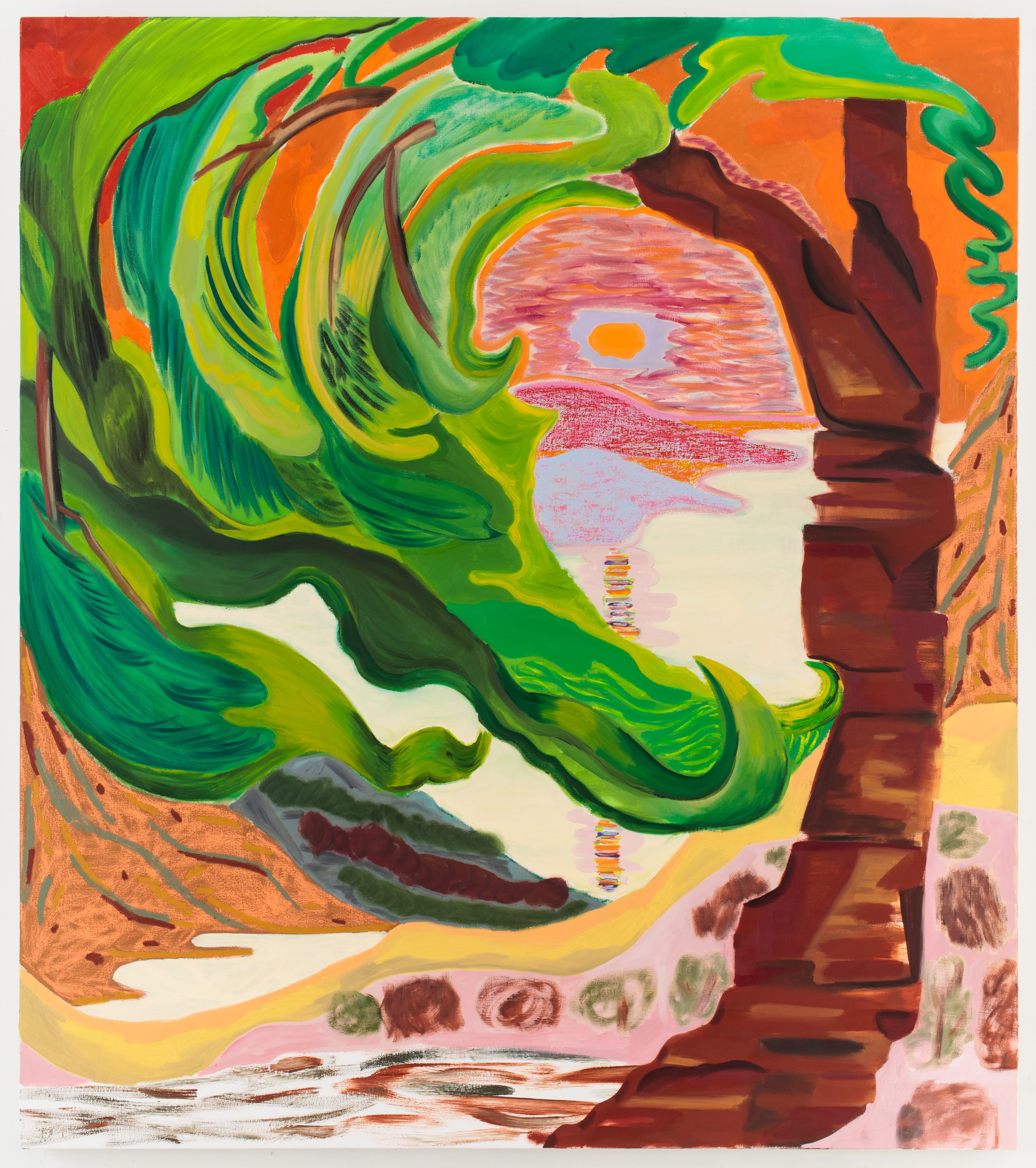 Coming up next year I am excited about my next solo show with Rachel Uffner in May, and at the same time I will be releasing my first monograph book of landscape paintings with an essay and interview. Before then I’ll be participating in Beijing Gallery Week with Eva Presenhuber in March.

After Rachel’s show I will be preparing for a solo show in Dijon at Le Consortium. That show will also travel to a few locations TBA. 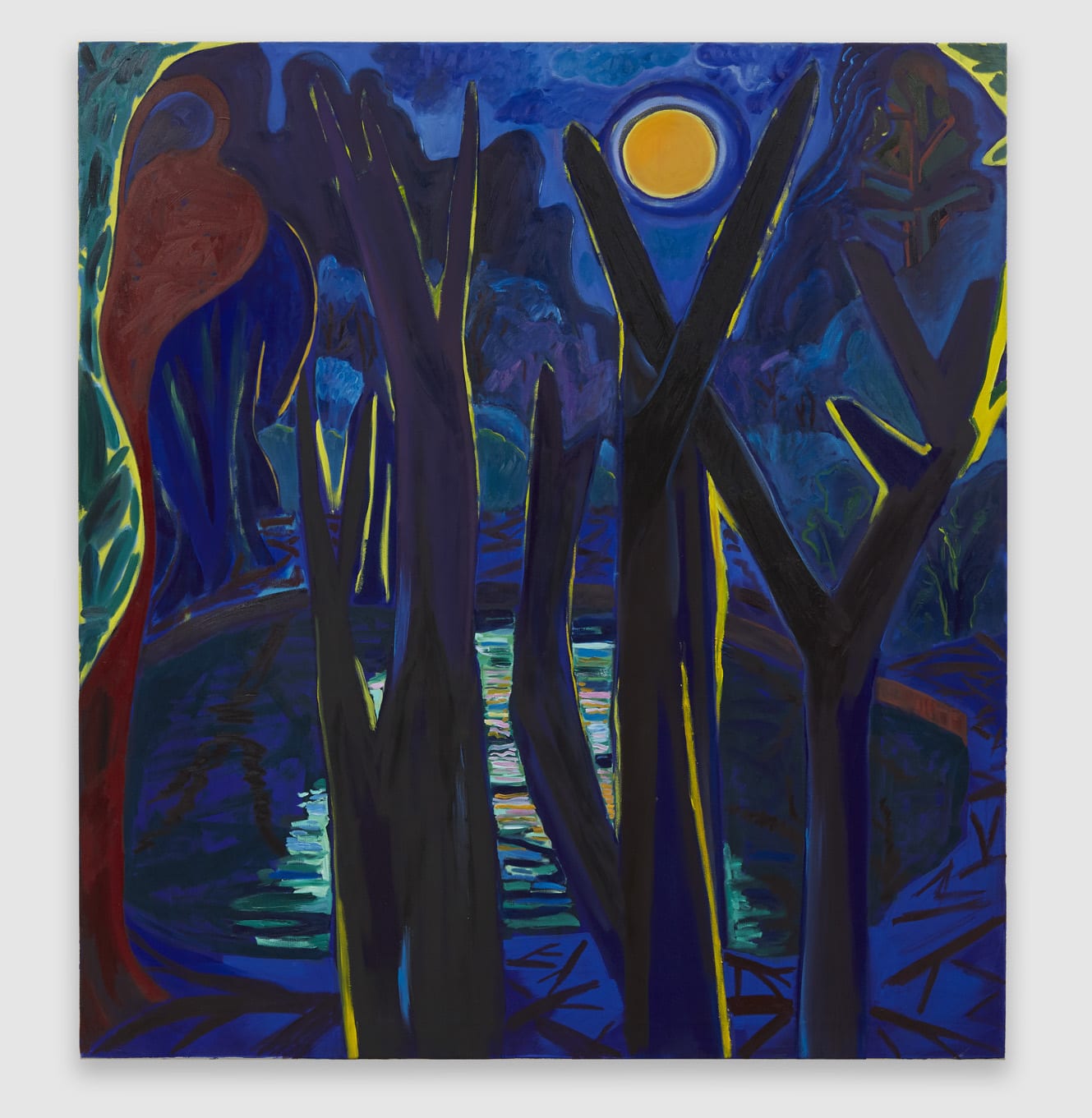