Sharona Eliassaf paints vibrant, dreamlike scenes full of symbolic undertones. Sharona grew up in New York City where she was able to take in some of the world’s best art before beginning her own multi-faceted career as an artist. She is now based in Tel Aviv, Israel where she continues to explore her artistic boundaries. 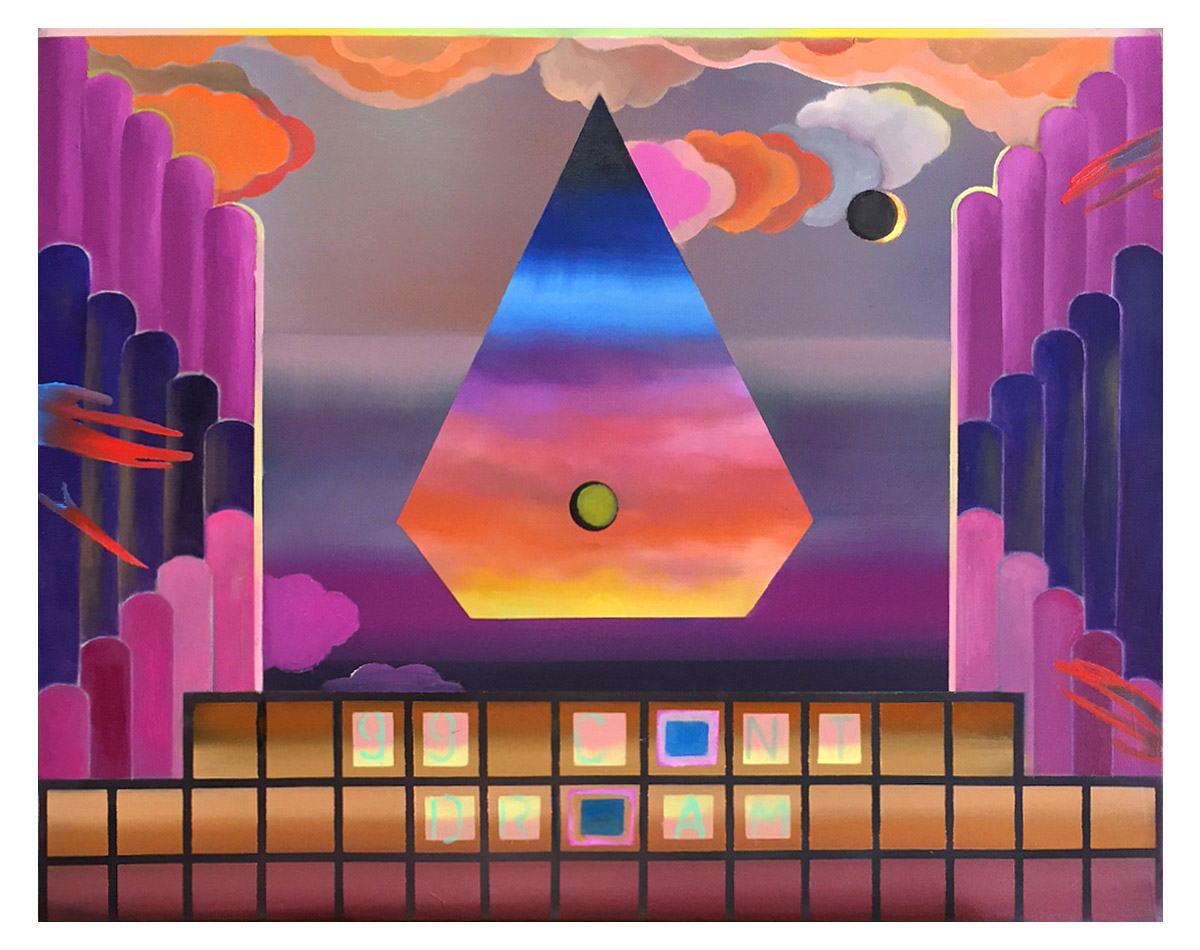 You are part of a young generation of female artists. What does being a part of a strong female community mean for you?

Success, respect, strength and support. In grad school I was taught by a few female artists who I admire and learned about the way they were treated and their struggle of achieving the recognition they deserved when they were my age. Although there has been a shift and a little bit more acceptance than in the past, being part of their world and community today I can understand their struggle and experience the challenges women still have to deal with. Over the years, I’ve met many strong female artists from many parts of the world who I admire so much. Being part of who they are and the warm community they form makes the experience of working in my studio so worthwhile and inspiring. 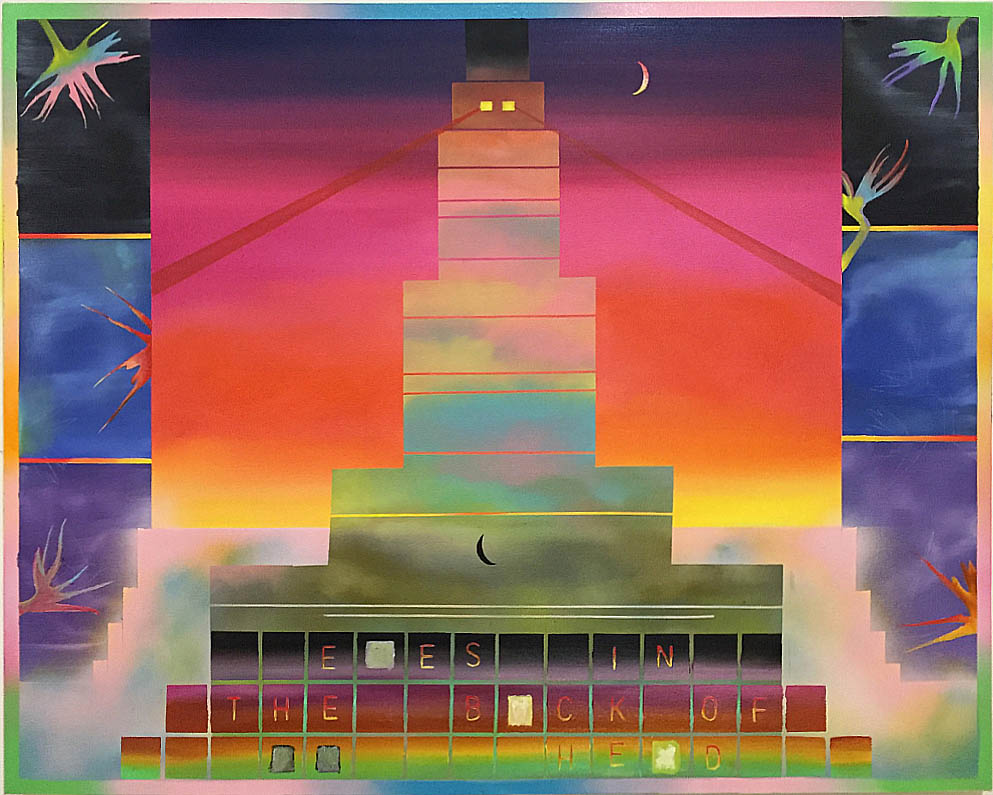 Every time I look at Hilma af Klint’s paintings, I feel her spirit and an admiration to her. It saddens me that in her lifetime she hid her magical and enormous paintings from the world which feel like they were made before their time. It amazes me that like a psychic she knew that many years after her death the universe would be able to accept her vision. 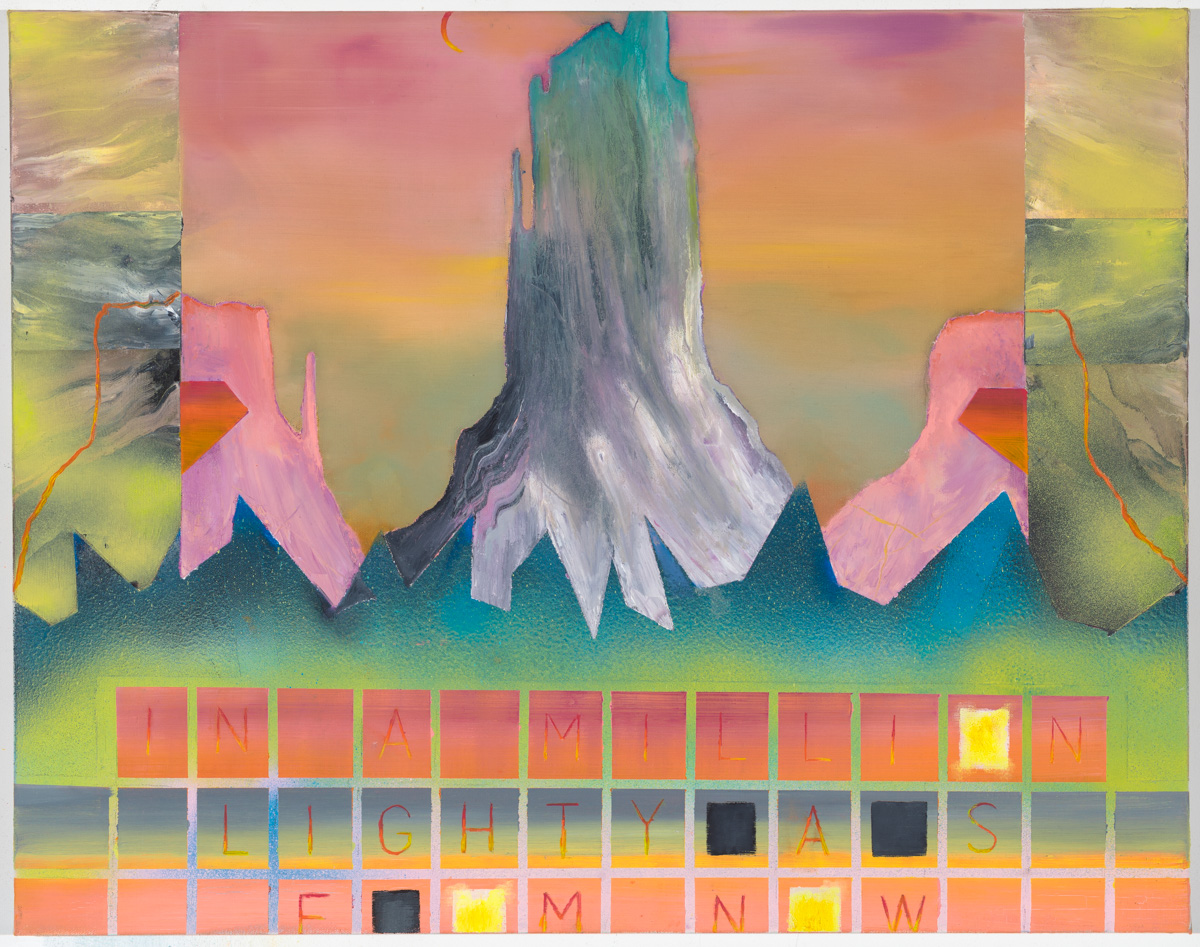 Personally, I have not, but unfortunately I have witnessed some of my other female artists friends, teachers, and peers who have. However, I do sometimes wonder if my career would develop differently if I were a man.

Although there are many opportunities and new platforms to work with in comparison to even a few years ago, looking at many gallery rosters, it upsets me that the percentage of men represented is still much higher than women showing and represented. I know for a fact that many female artists who definitely deserve to be shown are not, most likely because of their gender even though it may seem like less of an issue now-a-days for some people.

Yes, absolutely. I began my undergrad studies in 2000 and since then, in my point of view, there have been shifts, although not major ones, in the way women are approached, represented, and shown, in comparison to back then in the late 90’s. Especially in regard to female painters.

I personally feel the change even more apparent in recent years. It seems to me that there is an acceptance to work made in the present which feels more personal and intuitive. Also, many more of my female artist friends have been showing more in recent years than beforehand and I do not think that this is a coincidence.

Recently I’ve been approached by female curators who relate to my work and invite me to show in new project spaces and platforms which they are forming. I love to work with anyone who can relate to my work not based on their gender, however, I feel a huge amount of gratitude when I work with female curators because I know that they understand the struggle and their main mission is to open up those closed doors to women artists. That is why I do not dwell on missed opportunities that I wished for in the past because I now understand that they probably did not fit for me in the first place.

I would like to be treated exclusively as an artist and not only as a female artist. I still think the road is long and it will take time for society to change their mindset but I’m hoping for 100% equality one day.

A few years ago, my good friend and fellow painter Emily Weiner and I formed an artist-run exhibition series called the Willows in Brooklyn Heights. We imagined the exhibition as an opportunity to get artists together to show experimental work in an informal way, and to have conversations in a hybrid gallery-apartment party. It was important for us to put these exhibitions together because we wanted to convey the meaning and importance of a conversation between artists from different communities and genders. It couldn’t be one thing or the other. The mix of work and artists was what brought together these terrific shows. 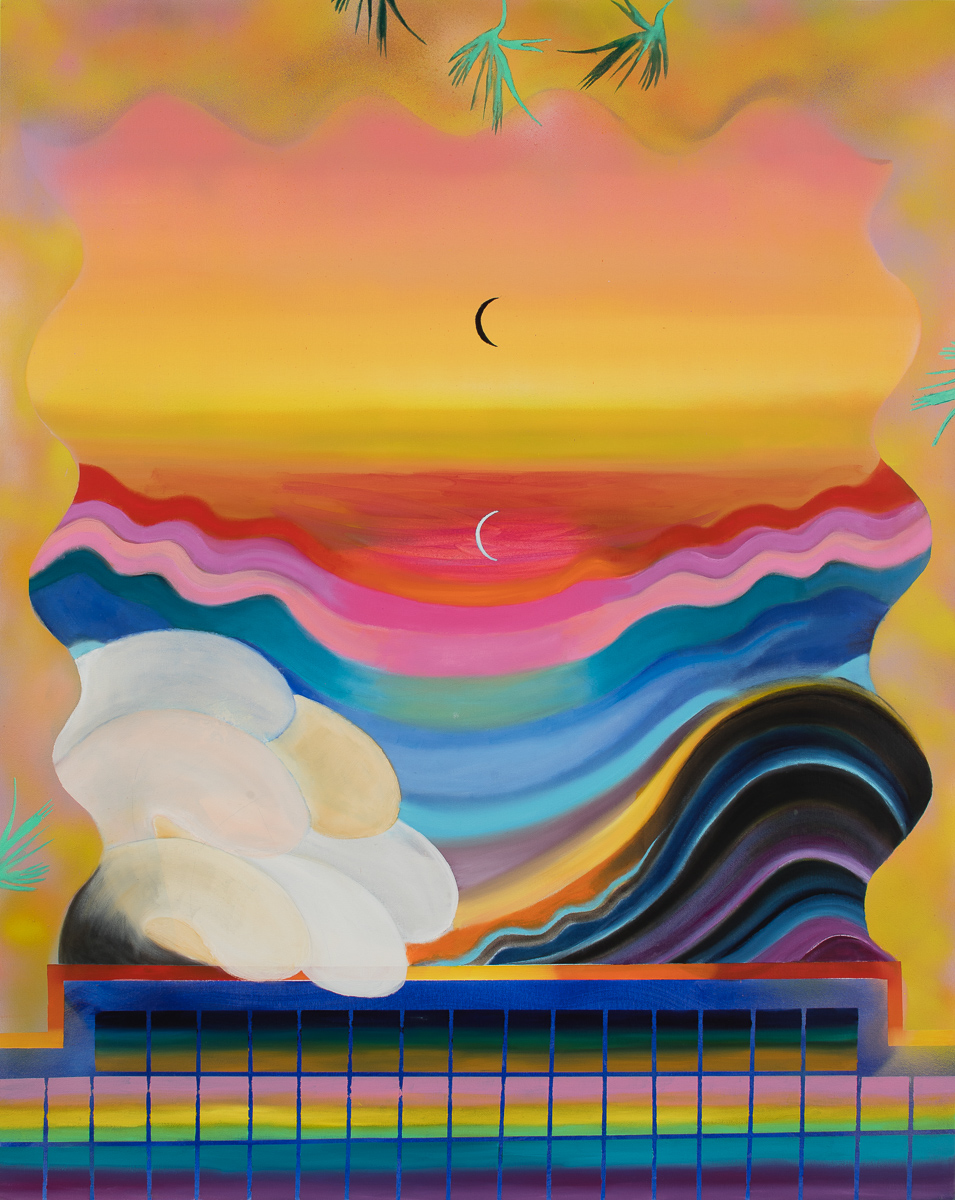 What is it like to work as an artist in Tel Aviv? What is the art scene like there and how does it compare to living and working in NYC?

I was raised in New York as a child and for several years I lived in New York and had my studio practice in Brooklyn. Around the end of 2015, I decided to move my studio practice to Tel Aviv where my family lives now because New York was getting too expensive and it was hard for me to manage a studio practice while working several day jobs. In Tel Aviv I don’t have to worry about making ends meet like in New York in order to afford my studio and paint, however, I miss the vibrancy and my artist community in New York, so I travel back and forth a lot and still live between both places for the time being.

There is a much smaller art scene in Tel Aviv in comparison to New York and maybe not as many opportunities than in the States, but it is vibrant and there is a lot of interesting things to see. I still feel that no place I’ve been to compares to New York for me even though the scene is changing and living in the city can get rough at times. 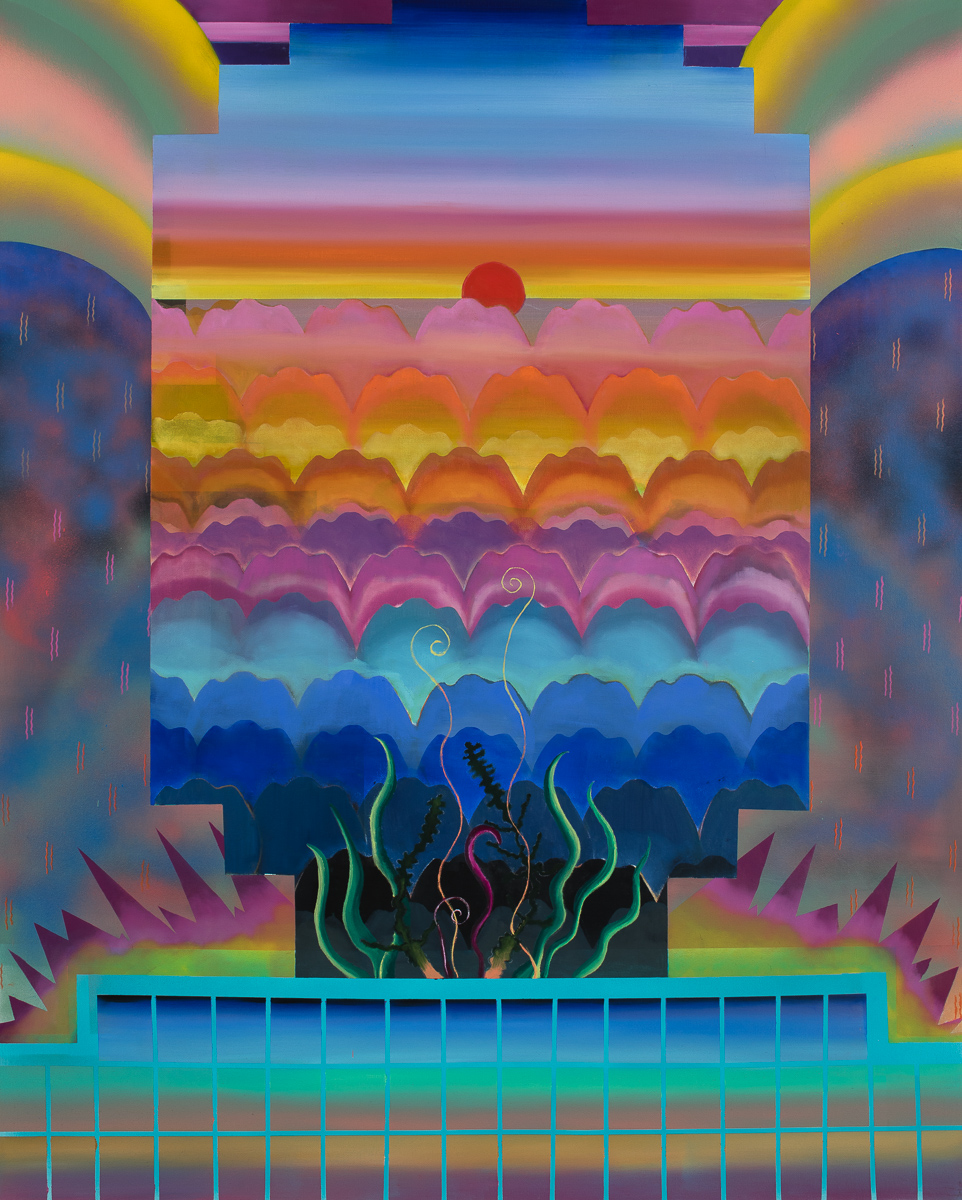 Color is a distinct aspect of your work. How do you choose your color palette?

In the past I was more concerned with imagery when approaching a painting but in the present the surface of the painting and the color palette are as important to me if not more.

I paint very intuitively and see color as a personal language. Sometimes I begin a painting without choosing specific colors for the specific painting. When I paint, I spread all the paint tubes I own in front of the canvas on a large table and most of the time mix the colors of my choice on the canvas itself without the use of a palette. Sometimes I like to purposely choose colors that may not feel like they may work together just to see the result. 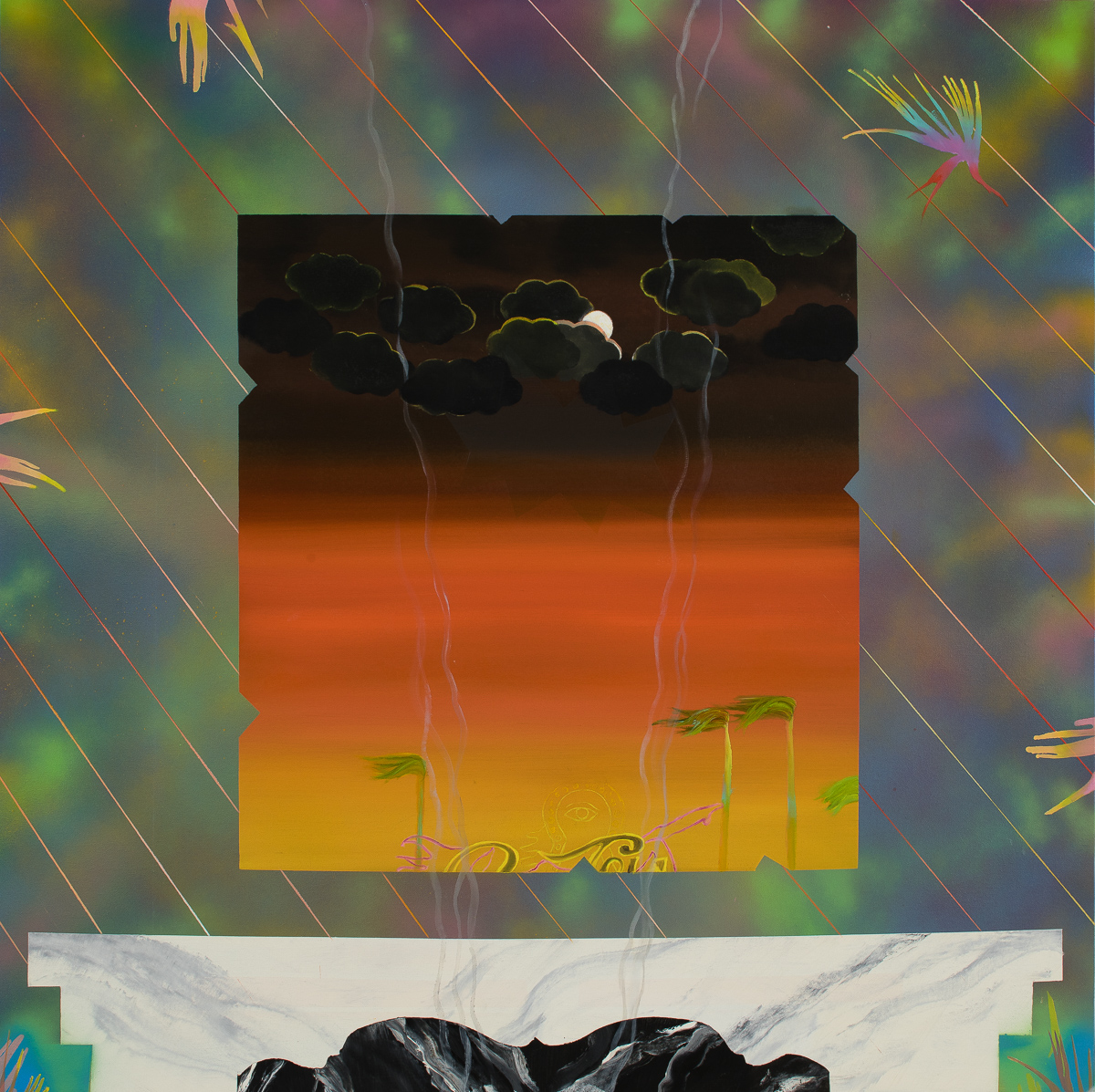 Where do you draw inspiration?

My source material comes mostly from personal experiences, as well as ideas and images from newspapers, television, and overheard conversations. I was always drawn to dual and alternate realities—such as mysterious relationships that form in nature, or the deepest fears that dwell behind everyday life. I think this has a lot to do with my own personal experience of living in two places and being part of separate histories and experiencing dual identities in my everyday life.

Many of your works have a dreamlike feel to them. How do you achieve this?

When I was young I liked to watch a lot of television, specifically evening game shows such as the Wheel of Fortune. I realized that in a lot of these shows there is a picture of a landscape incorporated in the stage set that does not necessarily relate to the reality of the audience sitting in the set or the viewer watching the show. It felt to me like this is the landscape that everybody wants to be a part of but unfortunately, they cannot be there.
This brought me to the idea of composing a landscape in a brand-new composition or set which does not necessarily relate to that specific landscape.

All of my recent paintings are about two worlds becoming one and turning into a third world which probably signifies an eerie, metaphysical and spiritual feel which I aim for. I sometimes use this composition of the stage as an excuse to make sense when putting together different aspects that may not seem to relate together into one painting surface. Structures have certain rules and I like to play around with that in my work. Sort of like building my own utopia, landscape, environment and dream. 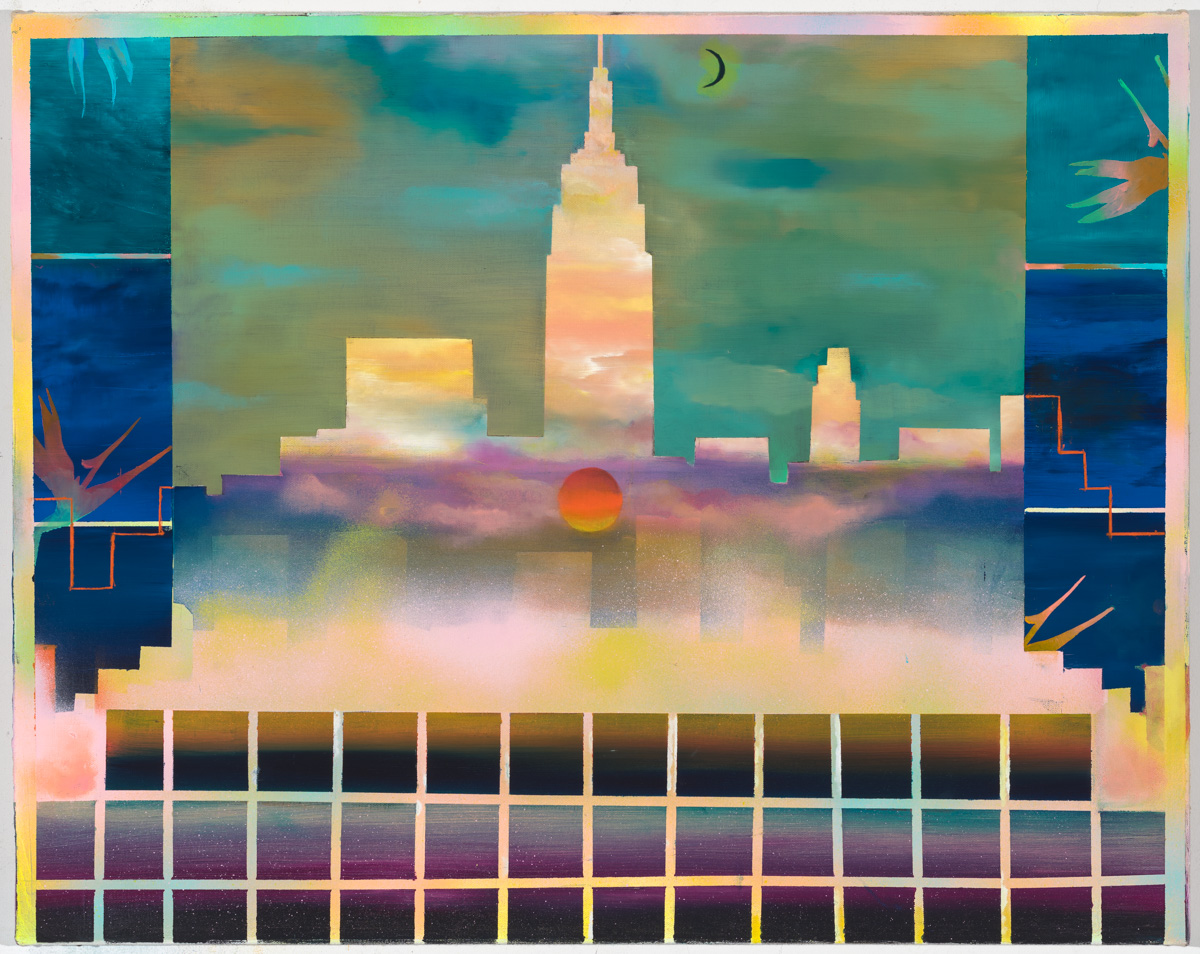 I am very much excited about the exhibition I am participating in now at the Crystal Bridges Museum of American Art in Bentonville, Arkansas titled “The Beyond: Georgia O’Keeffe and Contemporary Art” curated by Lauren Haynes and Chad Alligood. The show will travel in the fall to the North Carolina Museum of Art and after to the New Britain Museum of American Art in Connecticut in 2019. I’m very much excited about this exhibition because I am showing with contemporary painters who I admire and who are also my peers together with a significant body of work by Georgia O’Keeffe.

I honestly did not understand the impact this exhibit would have on me until I saw it for myself last May. Having my painting shown next to O’Keeffe’s “Black Place II” is a huge honor for me as a female artist. As a child, it was one of my favorite paintings of hers and I would look at it with admiration every time my parents took me to the Met. I’m a strong believer in telepathy and who knew our paintings would have a conversation one of these days.

Now I’m back in the studio for the next few months making a new body work which I’m pretty excited about. 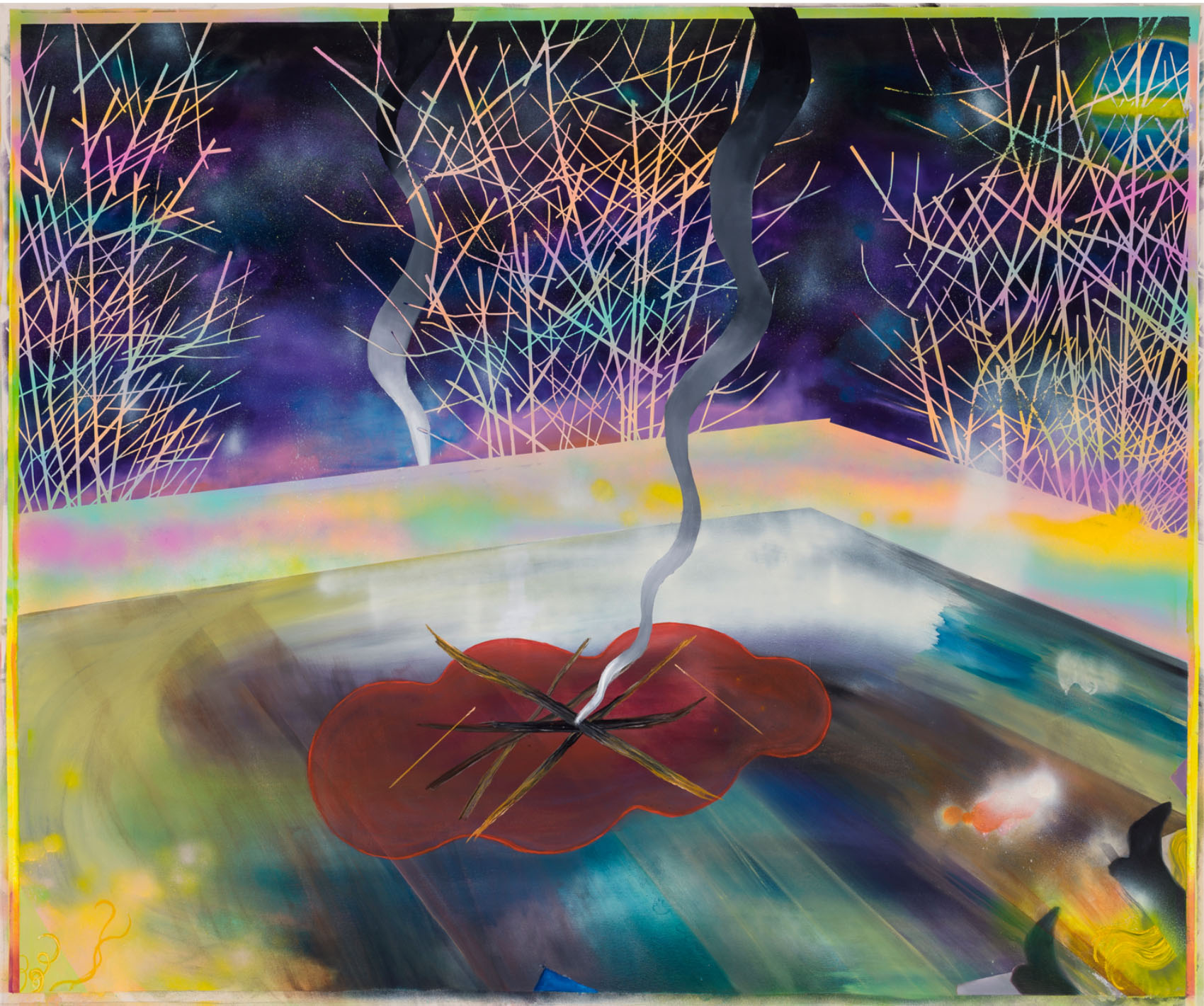 Holly Coulis – every painting of hers is a world of its own. I’m intrigued by her playfulness, energy, elegance, modesty, and sense of humor. Holly is also a tuxedo cat fan (like me) and a feminist.