Somaya Critchlow uses autobiographical references from her memories and observations to creates fictional characters in imagined spaces. She paints expressive brushstrokes in earthly tones to portray black female figures. Describing her works, Critchlow states: “My current work looks at the portrayal of the self and the black female body exploring the psychological aspect of a black female body through popular culture and self-discovery, using the self-portrait as a starting point to explore a deeper reflection of iconography, self and imagination.” Critchlow lives and works in London. 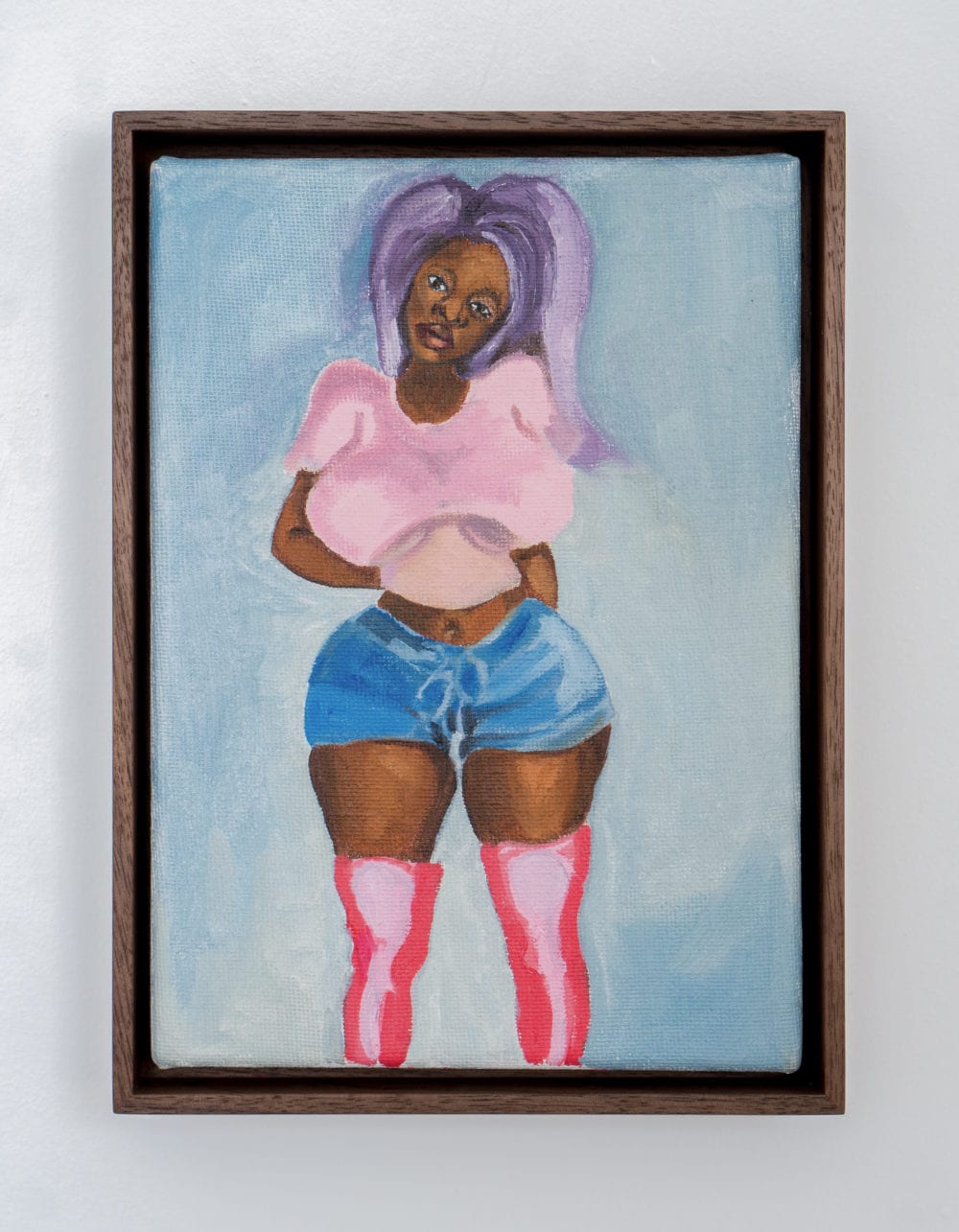 Tell us a little about yourself and your background

I was born in London and spent the first few years of my life in Sheffield, up north, before moving back to London. As a child, I grew up in an artistic environment – my mum was studying Fine Art and I remember going in to university with her at about age 8/9 and joining in with the classes. Even then I remember thinking how excited I was to participate and learn more. I was very lucky to be there with her.

My mum’s dad, my grandfather, was a Professor of Islamic Arts, and at times an art teacher, so both him and my mum would indulge me with art forms such as learning geometric patterns or setting up still lives. I also went to a Waldorf Steiner school and nursery, where creativity is a core part of your learning; lots of art, woodwork and gardening classes, things like that. I think I am a very earthy person, always drawn to the sea. My grandma is half Irish, which is a very magical heritage.

Was there a pivotal moment that led you to want to pursue art in a full-time capacity?

Yes and no – there were many times when I decided that it was something that I wanted, but as a process I think it is something that has happened very organically. I only wanted to pursue art full-time when I found meaning in it that made sense to me. I feel like it was the moment that I began stumbling across these figures, the ones that I am painting now, that made me greedy to know more about them. Everything else became secondary to finding time to paint and draw. 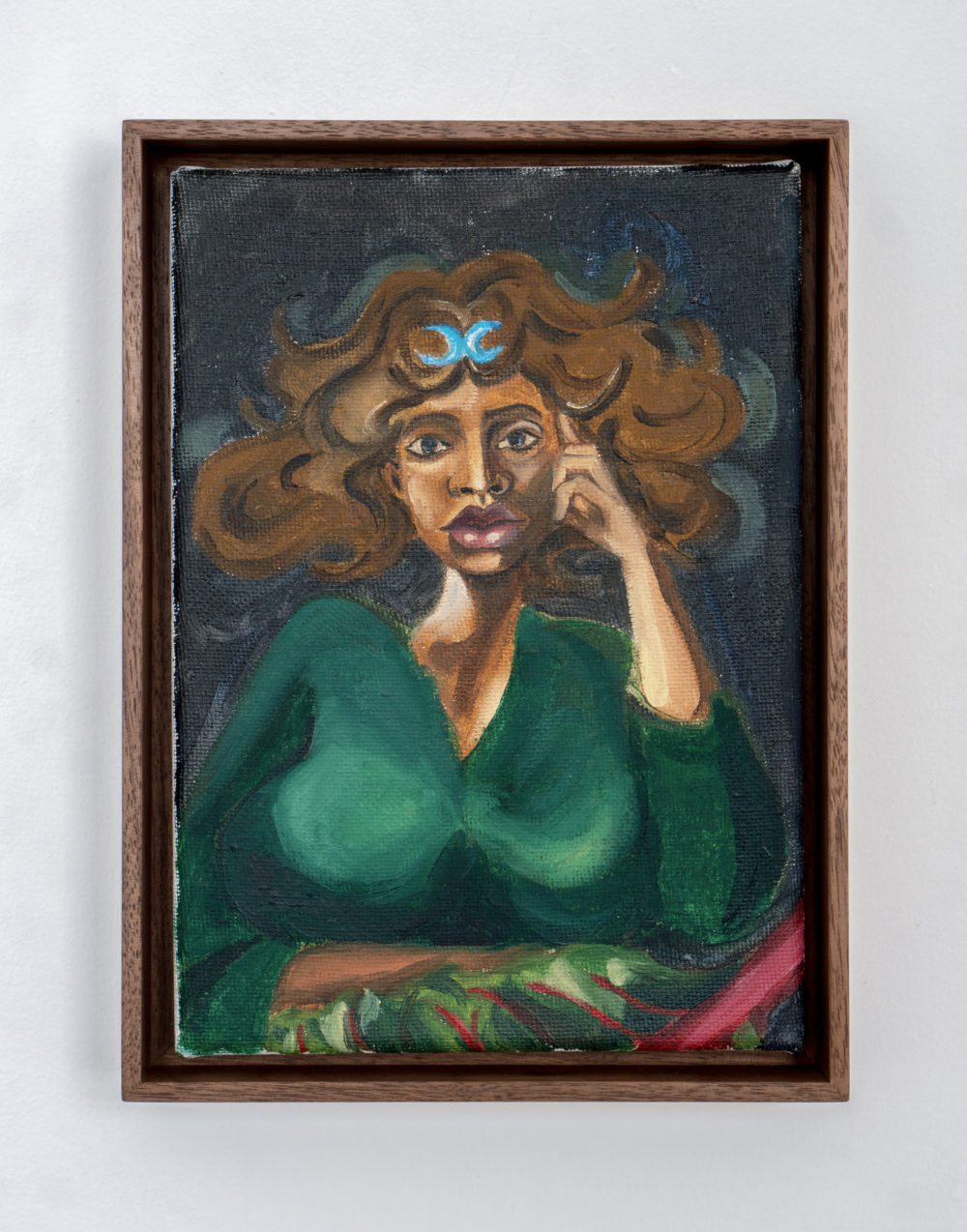 A lot of my inspiration comes from these shows called Love and Hip Hop. I started watching them whilst I was at university. The series was something that I found a lot of comfort and humour in, but it was only towards the end of my postgraduate course that I felt the courage to use these influences, which had been inspiring thoughts in me. It was around the same time that I was creating lots of self-portraits and working from my imagination. Love and Hip Hop is an almost entirely black cast and there are a lot of strong personalities in the show, lots of women. It was the first ‘reality TV’ show I had watched that showed black women just living their day to day lives trying to make it in the industry. Obviously, the show overall is a more dramatised version of reality, but something about it really resonated with me. The women in the show go through a lot in life personally, with men, with children, through the strip club and entertainment industry, as well as just because they’re women. Whilst I was studying at the Drawing School all this stuff just seemed to fuse into my work. Aside from that, I listen to a lot of Kodak Black while I paint, and I have been gradually creating a collection of art books that are almost all female painters Leonor Fini, Remedios Varo, Leonora Carrington, Rita Ackermann and Lucy Stein who was the only tutor to visit at university that left a real impact on me. I am very interested in the female Surrealist painters, even though I think Surrealism as a label is counterproductive to what they were actually doing.

How does your experience working in drawing differ from painting? Do you set aside time for each or work congruently in the different techniques?

I think for me now they are very intertwined, but my experience in each is very different. I studied painting first at university, and then drawing after at the Royal Drawing School. As processes they differ for me in that drawing is very much about working something out and recording information as well as visualising ideas from my imagination. It is the first stage for me to create a painting as I always draw out each painting before I start it. Sometimes the drawings are very gestural and bare, and at other times I redraw something again and again until it becomes more realised. Whilst I was studying at the Drawing School, I was drawing around 30/40 hours a week and during that time I learnt so much. Drawing is an amazing way to record information, objects or scenes of interest and texture. It also taught me that I am quite a precise drawer. I work well in confident lines, which is very different to how I work and like to work when I am painting. I am much more fluid when I paint. I am very into painters like Manet, Velázquez and Goya and how they manage to make a paint mark look like a hand, without drawing it in great detail, they somehow manage to catch it all in brush strokes. I used to paint solely from photographs and I found this really problematic because it meant that I was trying to make something that was always held to the visual consistency of a photograph. Paint can offer so much more than that. Painting doesn’t really have to make sense laterally/logistically, but it can make sense in that it just feels right instinctively. Drawing intensely for over a year enabled me to work confidently from my imagination and gave me the technical ability to materialise these women from my mind. Drawing empowers me, and painting frees me into an unknown universe that can become engulfing and three-dimensional.

Do you feel a sense of responsibility as a young female artist using her work to speak on social issues?

Not necessarily. I am aware that being black, female, and a painter means my work will automatically be political. I don’t feel it’s my responsibility to speak on social issues, but I do feel a responsibility as an artist, and to myself, to make thoughts and ideas tangible in images that I can’t in other ways. Painting black female bodies, I feel like it’s important for people to identify me as a black, female painter. We lack that in society. Not once in my art education did I have a tutor who was female and black. I hope that people being able to identify with me as a black woman and as a painter will be a positive thing particularly for other women of colour. 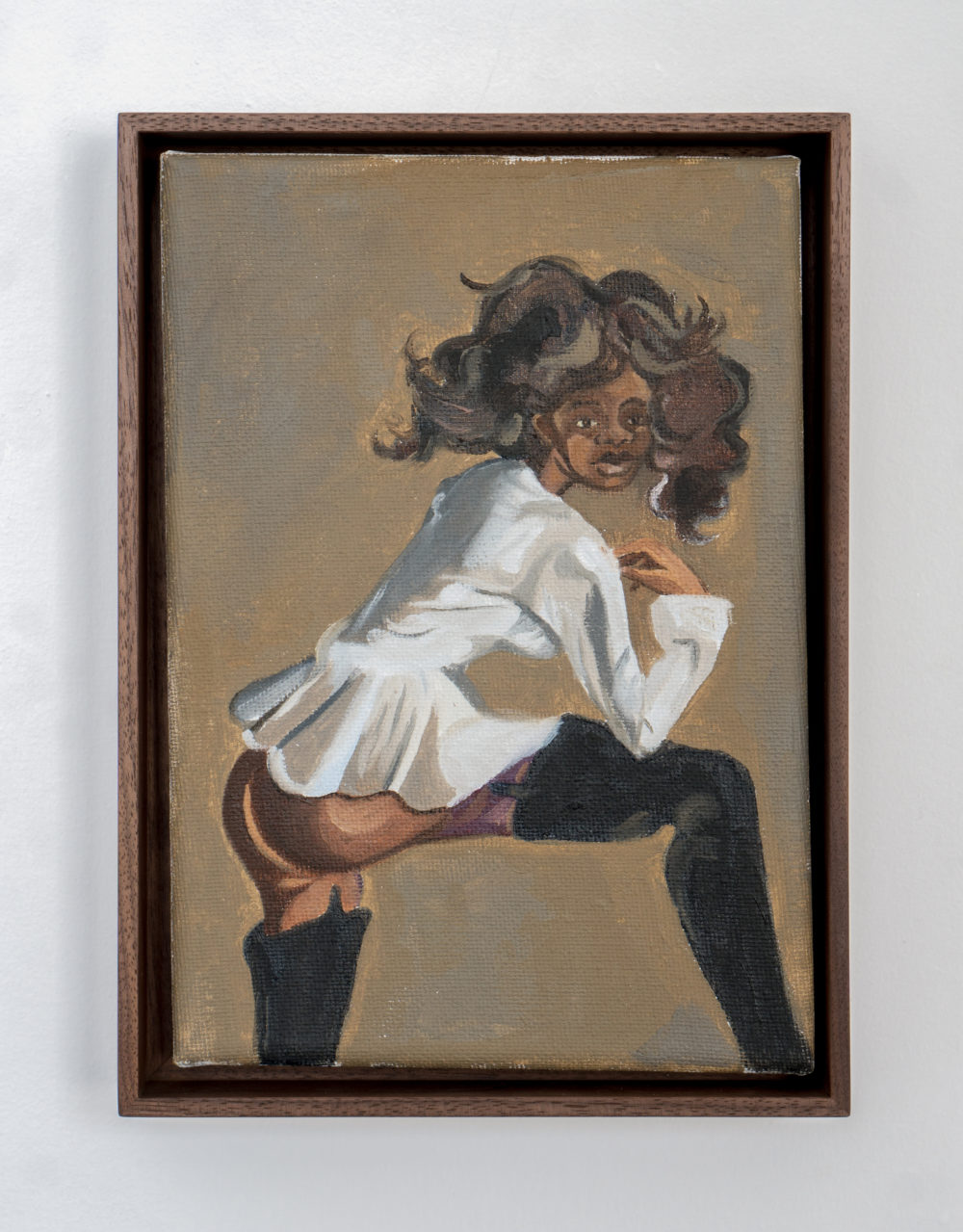 What is next for you? What has you excited right now?

I’m having my first solo show coming up in November at Efrain Lopez Projects in Chicago, which I am really excited about. It’s a series of miniature paintings that I have been working on over the last 8 months as well as one slightly larger painting. Each painting shows a different woman that I envisaged, though perhaps they could all be the same woman. They are all very special to me.

Aside from Chicago I’m working towards my first major solo show with my gallery Maximillian William which will be next year around Spring/Summertime so just working in the studio and building up to that which will be a really important moment for me. I’m very excited to be showing an extended body of this work.