New York-based artist Robert Nava’s latest work, a collection of five large scale paintings is currently on debut at Pace Gallery, Palm Beach. Throughout his artistic career, Nava has been known to tap into his and the viewer’s inner child. The artist’s expressive style, drawn from a myriad of inspiration from prehistoric wall paintings to contemporary cartoons, has become a staple in the collector’s bucket list. Nava has been increasingly well known in contemporary art circles, as he introduces this new series of compositions, where the great white shark is the predominant subject. The chosen subject matter proposes an age-old dialectic between good and evil, a predominant theme in the series of oil paintings. The exhibition will be open through January 17, 2021. Make sure to reserve your ticket through the Pace Gallery website. 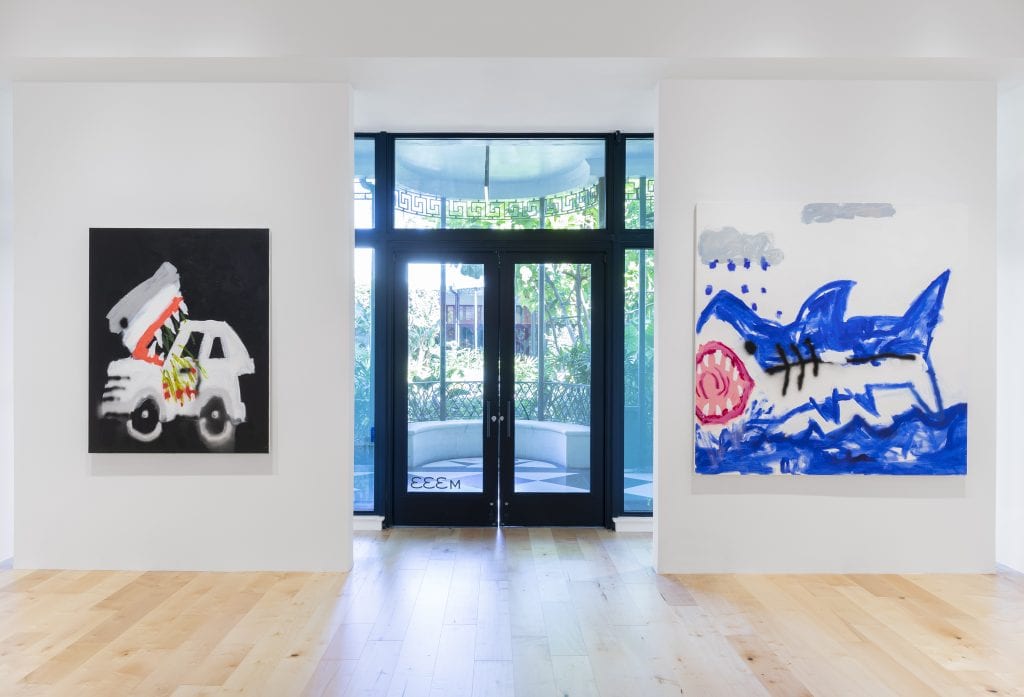 Through the handful of large-scale compositions, the artist introduces the viewer to fantastical realities where childlike imagination takes the place of common sense and reason. To face each of the compositions presented in the series is to enter a magical world built off the styles of Basquiat and Dubuffet, as well as an undeniable presence of mutation and transformation where the viewer’s imagination is allowed to run free. The shark, Nava claims, presented him with a world of opportunity to work through. The prehistoric creature has appeared through the ages as a protagonist of fear and destruction, the owner of the depths of the unknown. 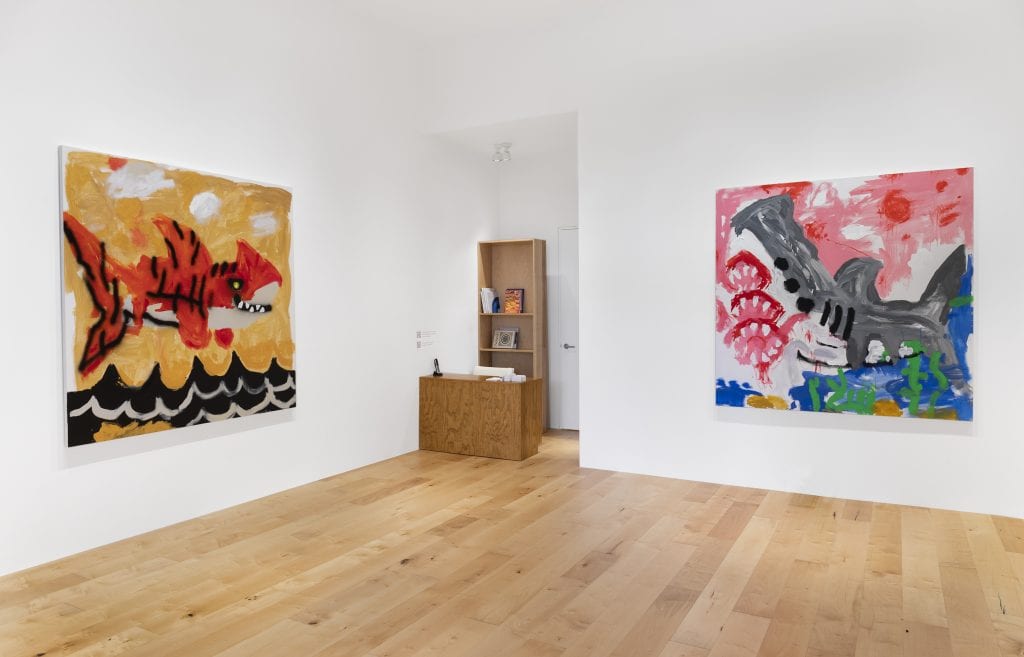 In this series, however, Nava turns away from that. Instead, he appropriates the creatures to his iconic style of fantastical monsters. Though the use of bright colors and meticulous repetition, Nava continuously plays with the line that differentiates reality and fantasy. Through this play of dichotomy, the artist delves into the exploration of the hero/antihero, and how they are shown through art. Ferocious animals appear throughout history as symbols of evil, whose slayers are therefore the embodiment of good and strength. However this line between the two forces has been increasingly blurred, a fascinating analogy to the present worldwide political climate. As he so wonderfully claims it, “history has shown us that even angels, which are typically depicted as benevolent entities, have the potential for violence and betrayal”. 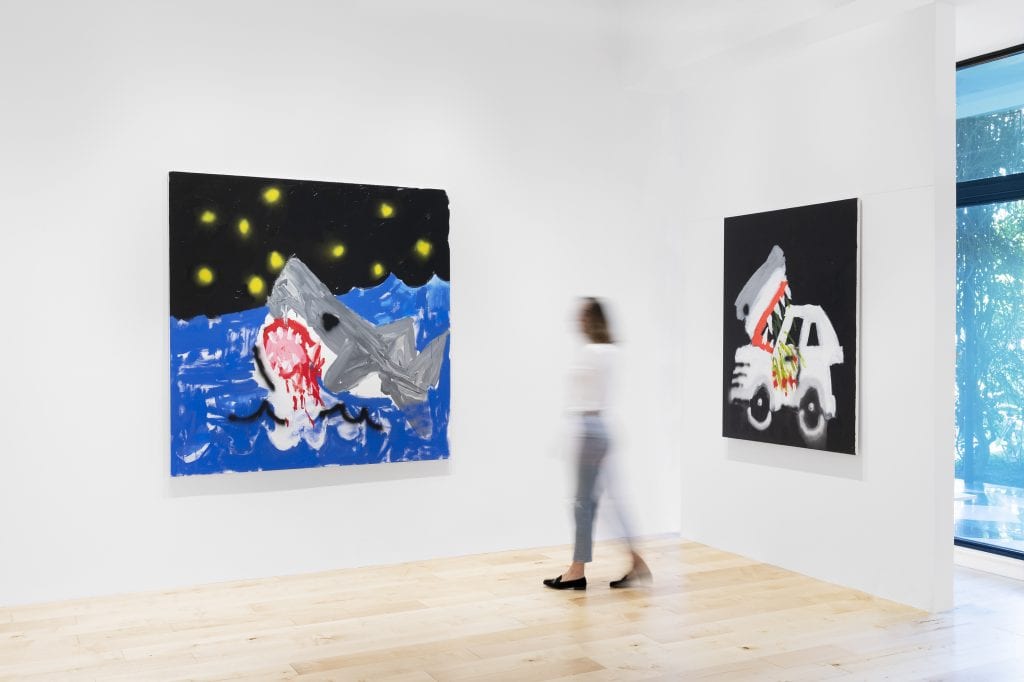 The delightfully colorful and playful depiction of sharks in altogether unnatural scenarios, intends in no way to hide or diminish the triangular patterns of fins and fangs which have incited fear in humans for ages. Nevertheless, it allows for the viewer’s guard to reduce in the face of exuberant transmutation. The iconography of the shark has undoubtedly been the face of horror in modern history, since the creation of the revolutionary Spielberg film Jaws. I can’t then think of a better subject matter to tackle questions of trust and fear in a time where these concepts have been stirred and merged beyond recognition. 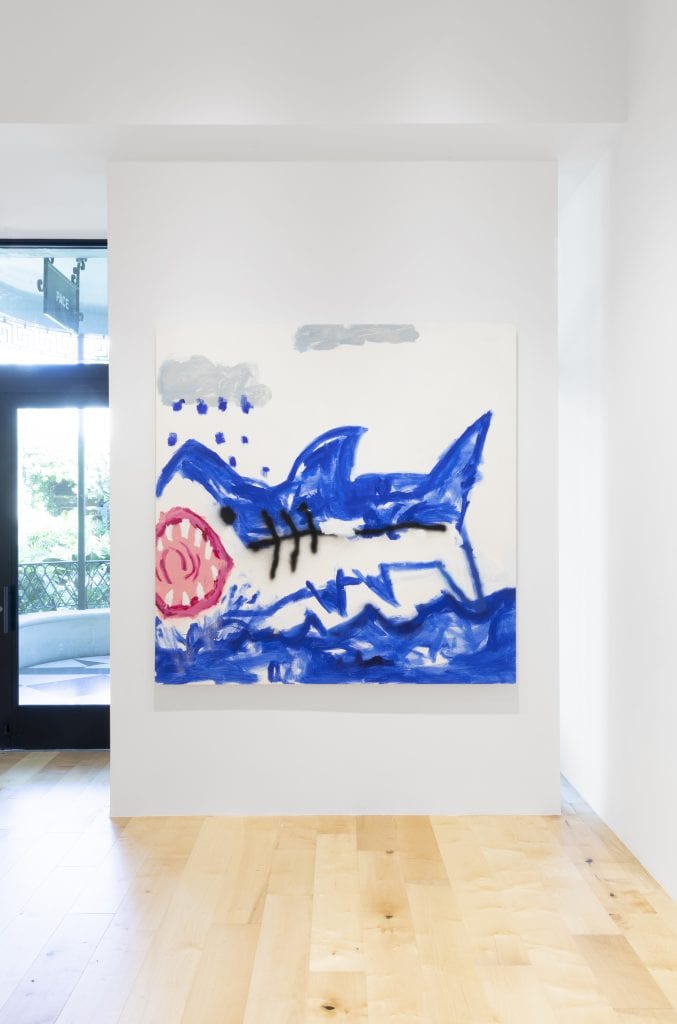 Through this body of work, Nava strengthens his stance in the Contemporary Art scene as an active questioner of the characterization of high art. A stance that has accompanied his name through the path of acknowledgment. Join Robert Nava at Pace, and learn to question your founded ideals, through January 17.