Stephanie Hier takes elements from the traditional canon of painting and puts her own spin on them. Using different materials such as ceramic and linen to adorn her works, Hier employs elements and subjects that explore the boundaries between a “high” and “low” artistic language. Stephanie lives and works in Brooklyn, NY. 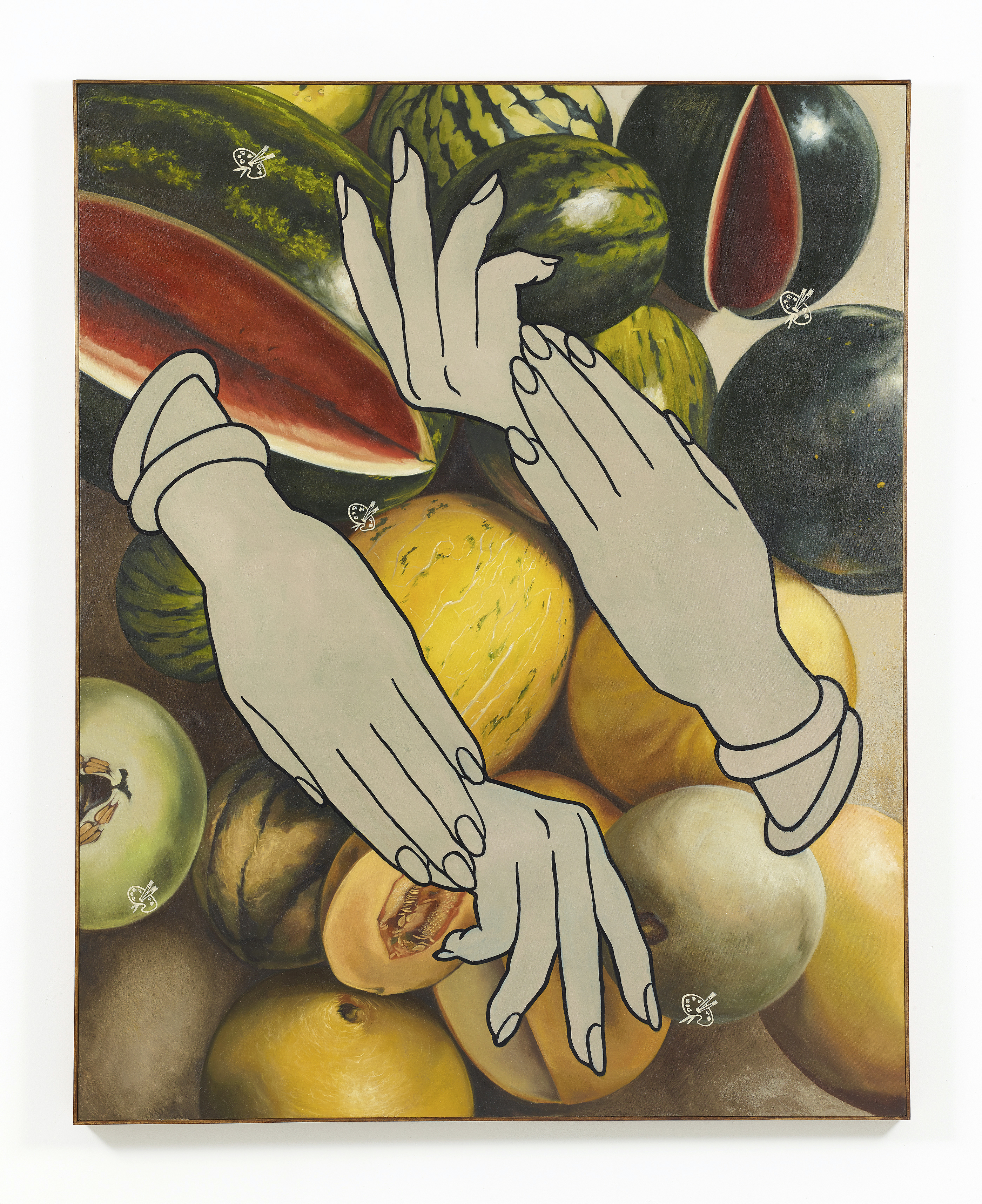 It feels great to be in New York at this moment when so many women around me are making exciting and challenging work. There’s a palpable sense of camaraderie for sure. 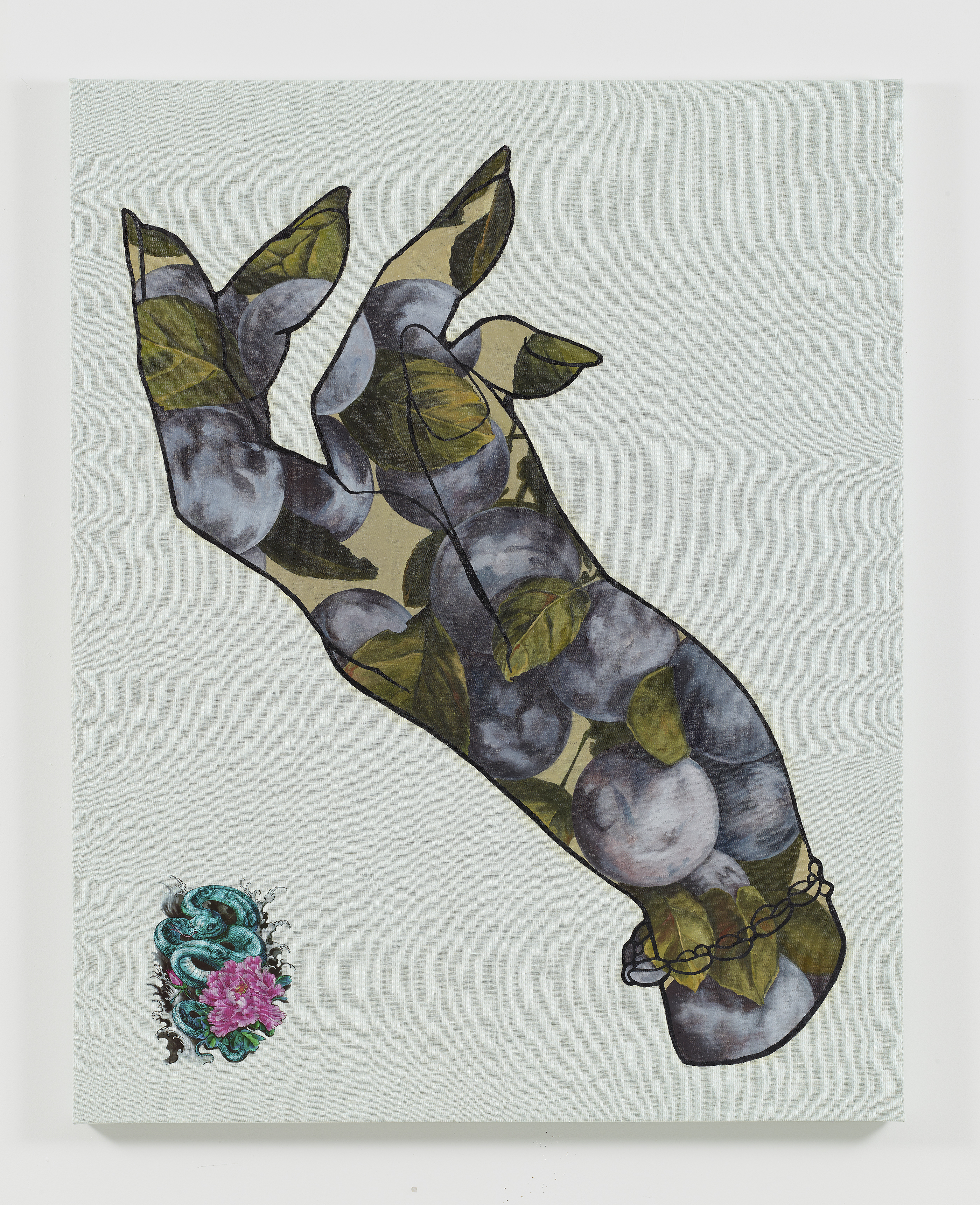 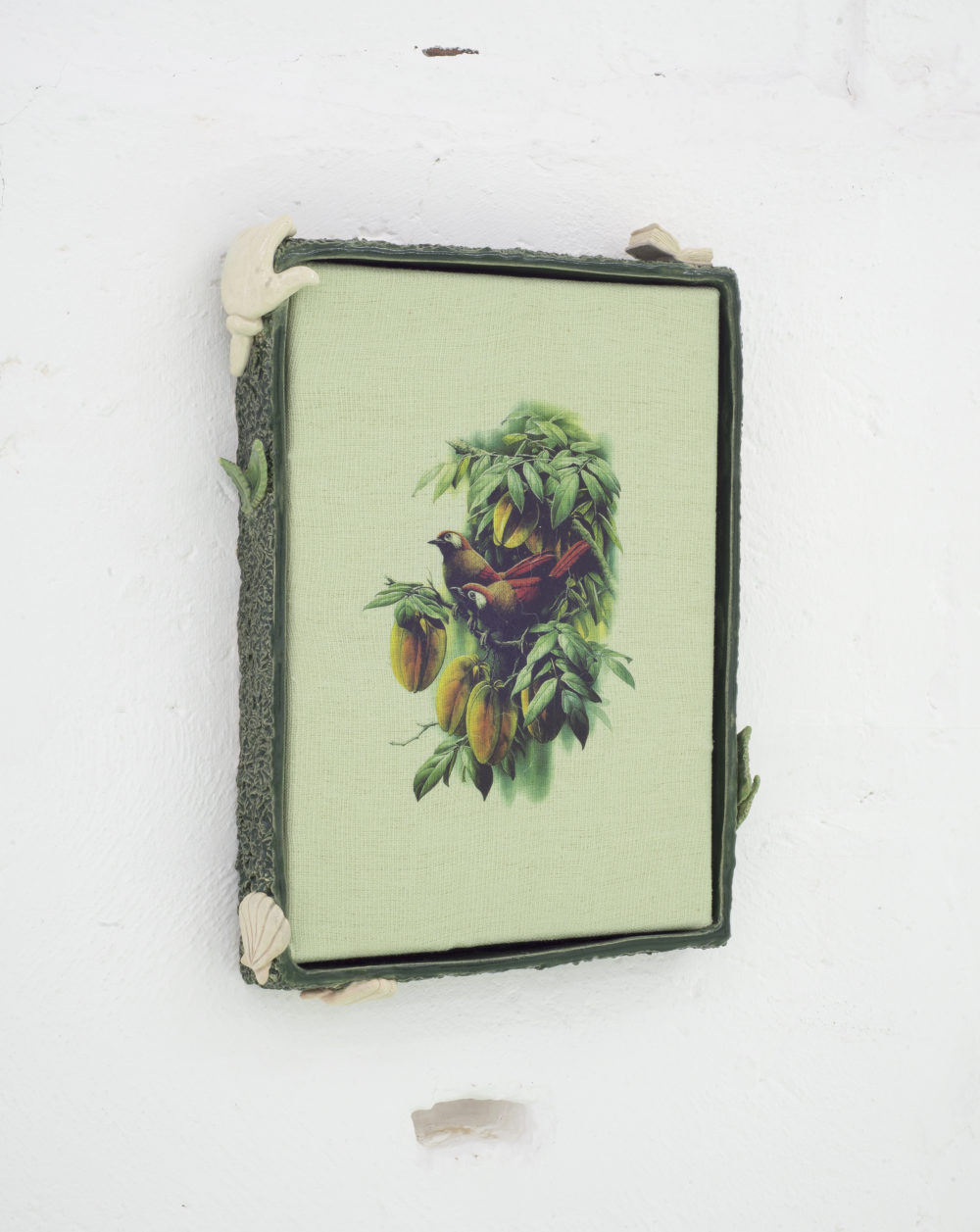 If we look at the statistics, women have been and still are underrepresented in virtually every aspect of the art world. In that way, all women are affected by an inherent gender bias in the art industry which naturally mirrors that of many other industries. On a personal level, I have been lucky enough to have worked with really great people thus far who have supported me and my work regardless of my gender. I often try to center the conversation around my work away from my identity and focus it precisely on the ideas I am exploring in my paintings, just as we would naturally do with any male artist. However, by shifting the focus away from identity we can create a space that ignores issues of underrepresentation which exists paradoxically alongside the need for gender bias reform (this goes for economic, race and class biases as well). This paradox is something that I wrestle with and something that we, as an art community, need to reconcile in a democratic way. 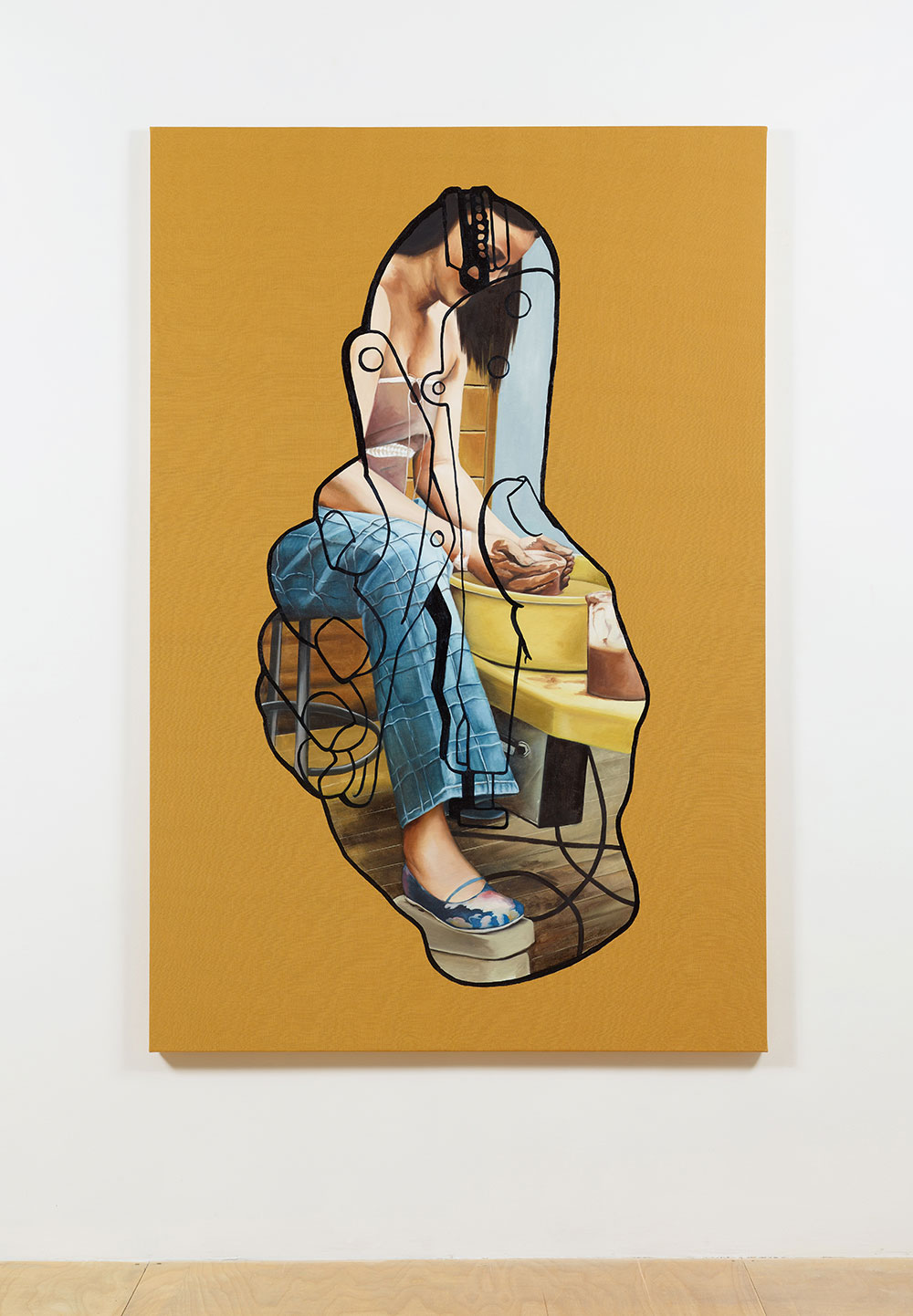 I don’t think I’ve been around long enough to have noticed a significant change during my career thus far. But I suppose the very fact that I am able to sustain myself as a full-time artist would be indicative of a drastic change in opportunities for female artists over the last few generations. 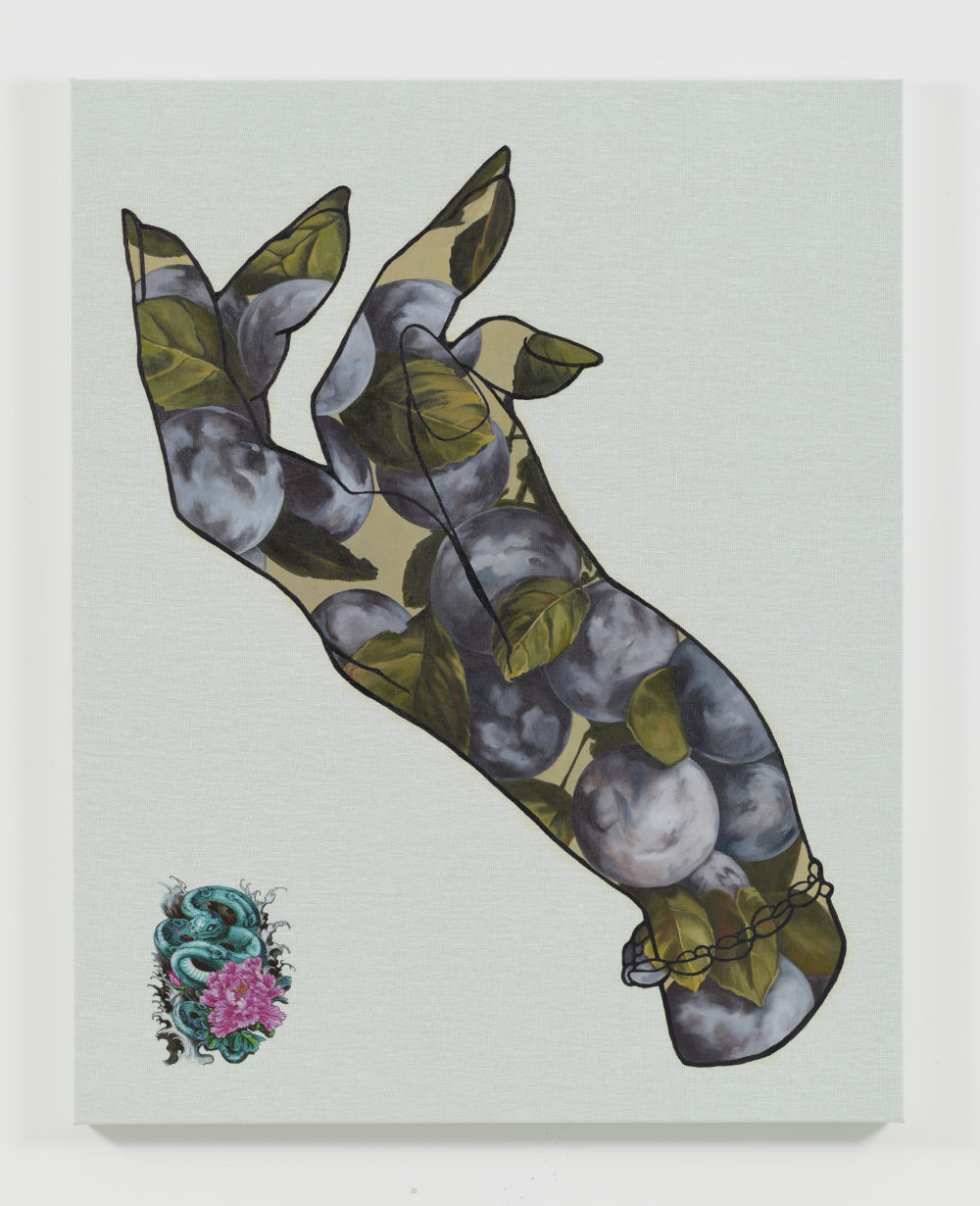 I would like to see female artists referred to simply as artists. I always shudder when our identities are forcibly thrust into focus rather than our work. 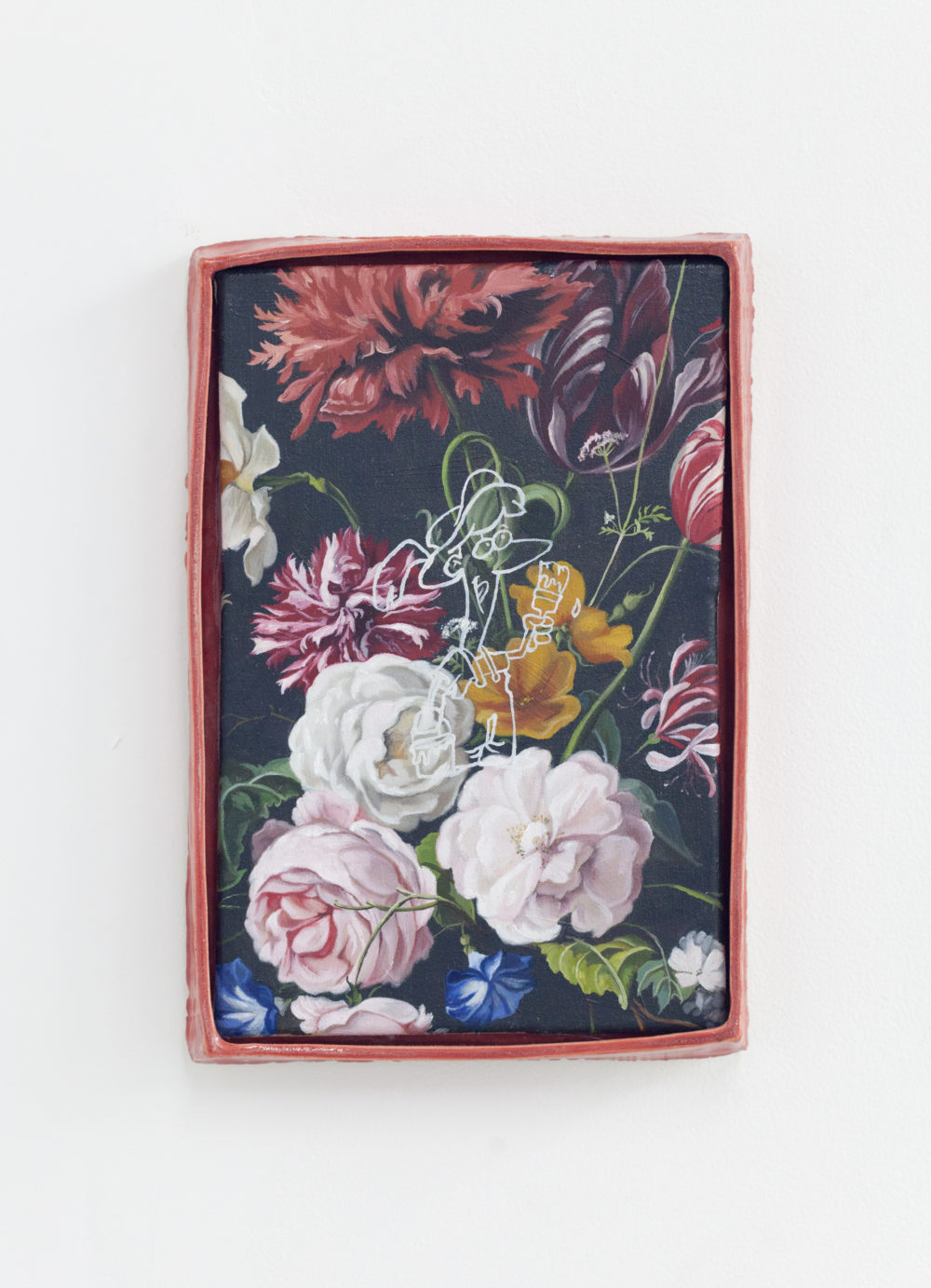 Your works have a lot of canonical elements to them. Can you explain where your interest in this symbolism comes from?

I spent my formative years as an artist studying at a traditional painting Academy in my hometown of Toronto. Although I see these studies as distinctly separate from my current art practice, I am still interested in reconciling Art History with the current state of image culture. Also, as a representational painter I feel that I am inextricably linked to the history of painting. I like to call into question its validity while also celebrating art’s achievements of the past. 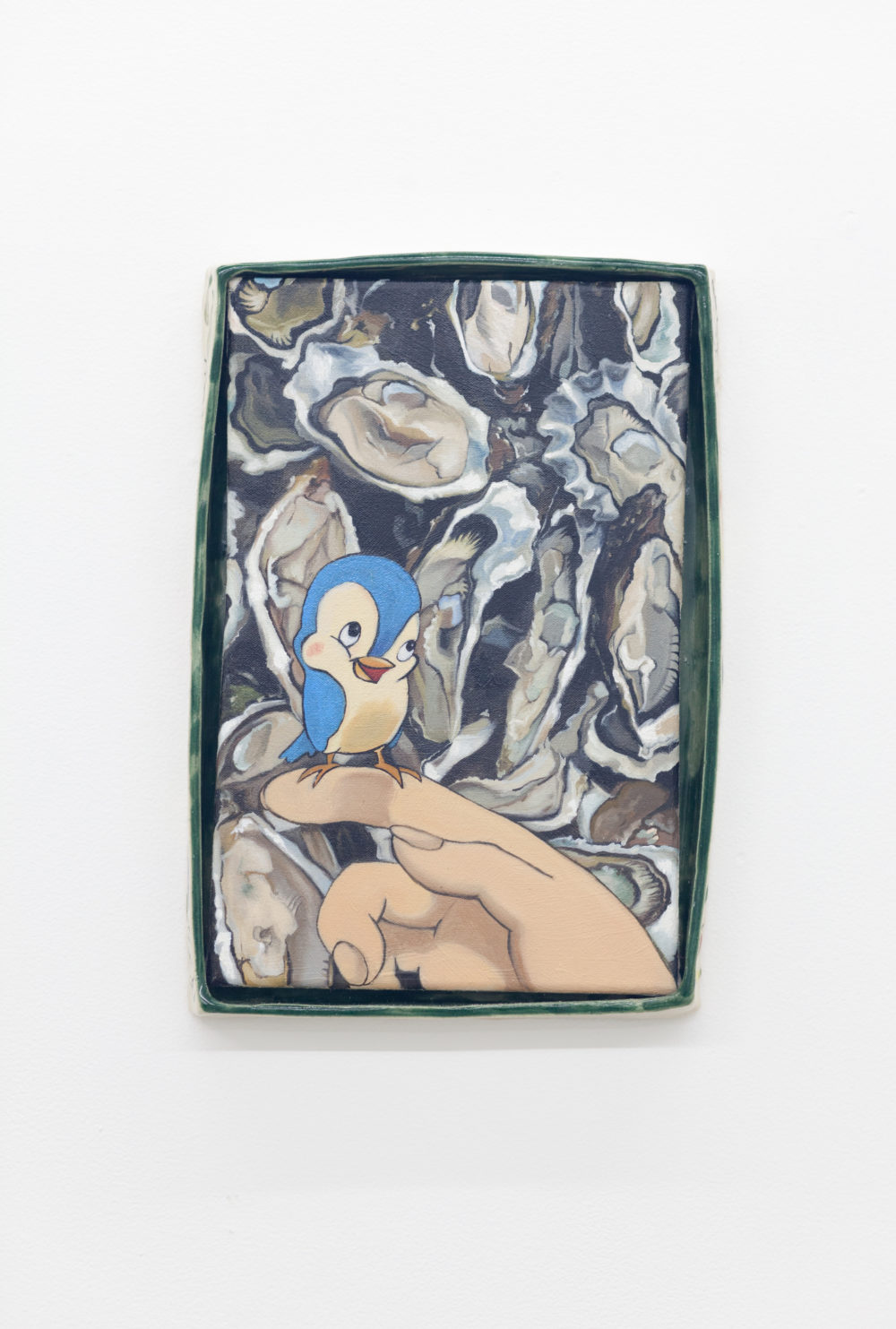 Many of your works incorporate high-brow and low-brow elements. Why do you think it’s important to mix elements with a dichotomy between them?

In the same way that algorithms dictate the sequence of images we see online, I’m interested in pairing disparate references together. I think it’s both fascinating and important to investigate how an object or image changes meaning based on context while also creating a non-hierarchical space for “high-brow” and “low-brow” references to exist. 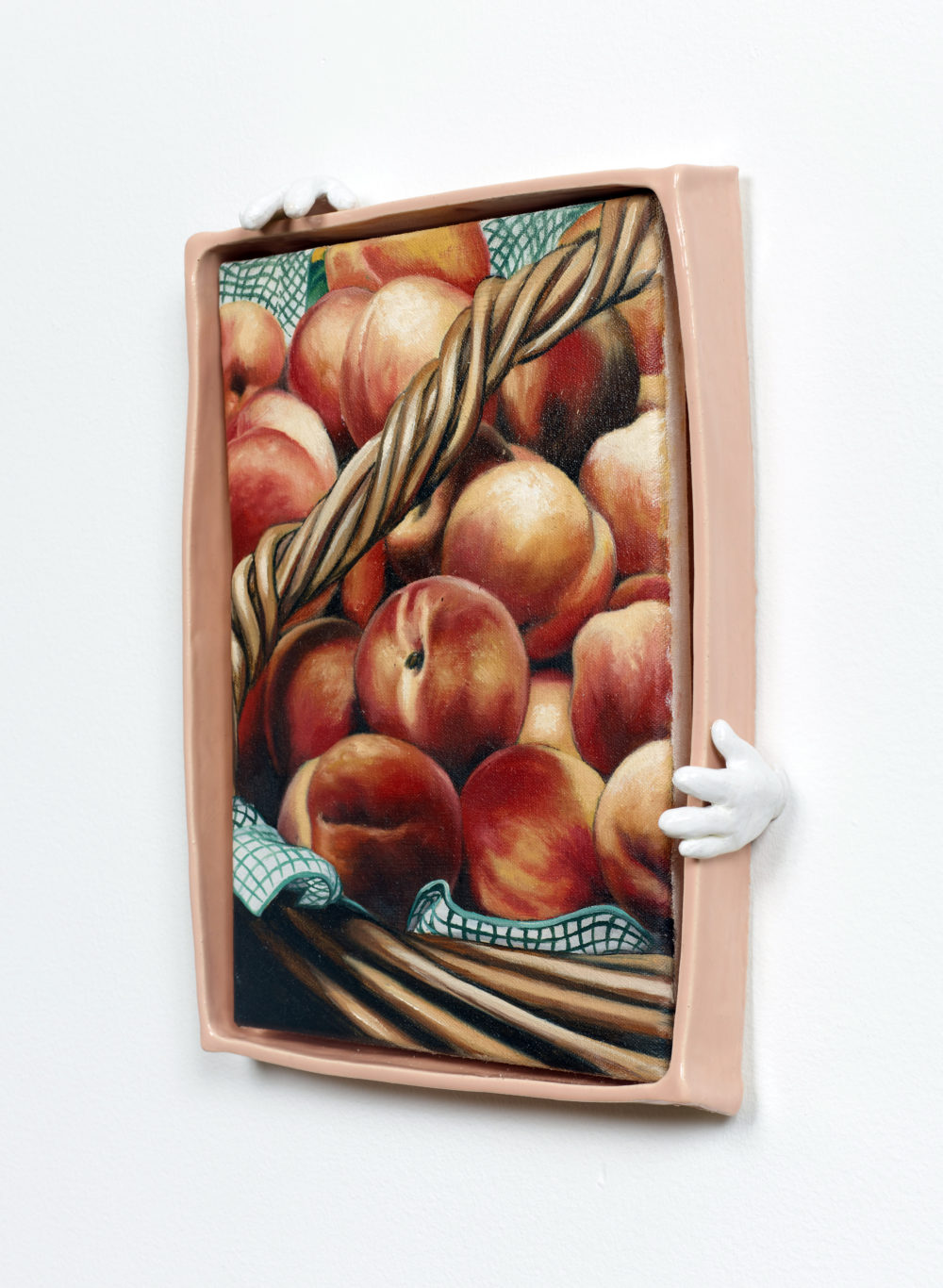 Your works seem to walk a line between tradition and playfulness. Is this intentional?

Definitely! In my work I pay homage to the painters of yore while also poking fun at the seriousness lent to the canon. Similarly, I am in constant awe of painting but am also drawn to the frivolity of pop culture (hence my use of temporary tattoos, clip art, and cartoons). It’s always a push and pull between the levity of cartoons and the solemnity of the canon. After all, sitting alone in a room and wiggling a brush full of pigments around on a canvas (for an entire lifetime) can sometimes feel like a sort of silly thing to do. 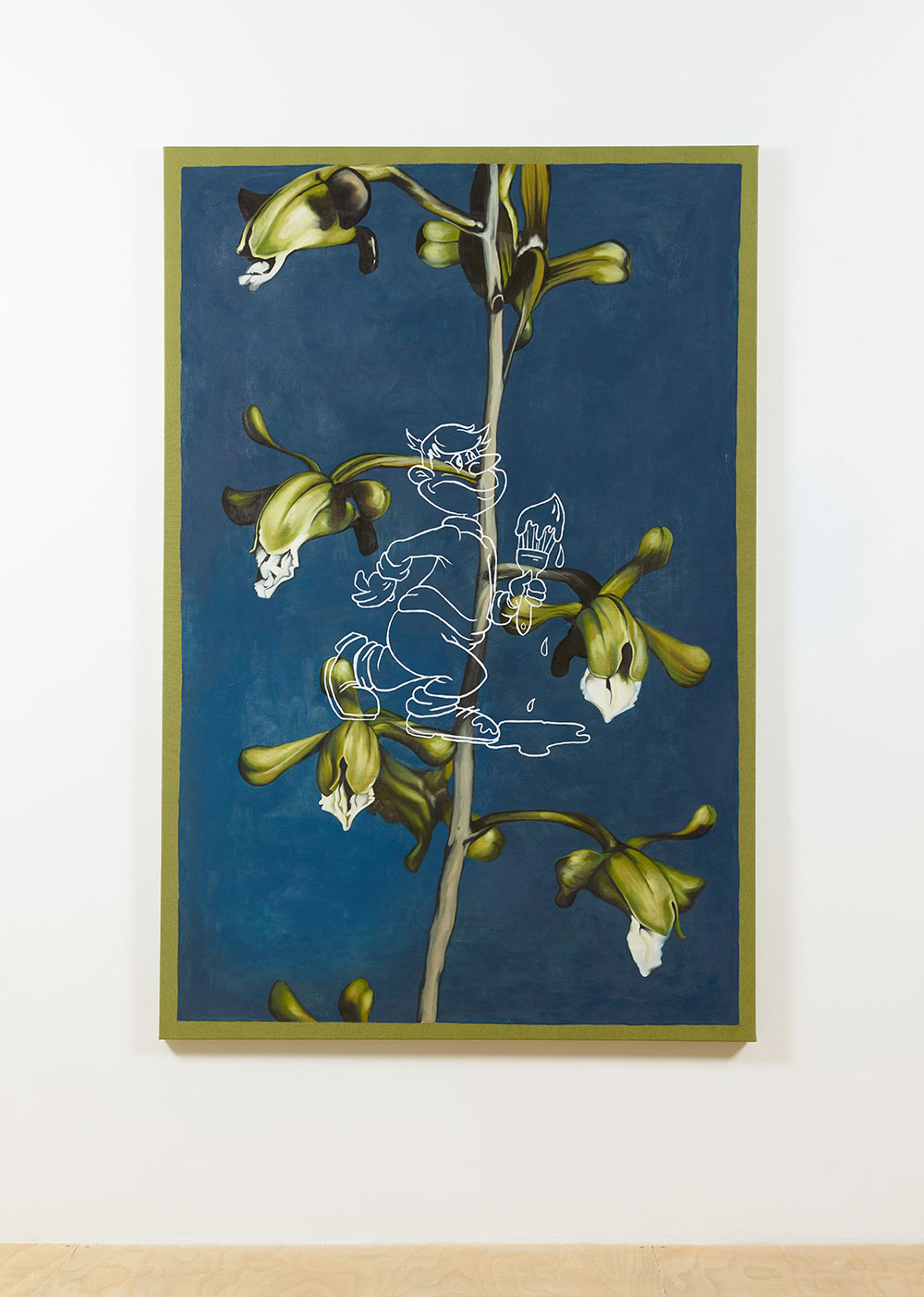 You employ different media into your works. Can you briefly explain the different elements that some of your paintings incorporate?

In my work, I make direct references to canonical materials by using materials like linen, canvas, sizing glues, oil grounds, and oil paint. I’m interested in using these materials self-referentially, to depict symbols that play around with the mythology of “the painter”. I then interrupt the history associated with these materials by framing pieces in lump hand-wrought ceramic frames or affixing temporary tattoos to the surface of the paintings. I like to treat the tattoos as a sort of ready-made aspect of the work which also function in more than just a semiotic way. Over the course of my art practice I’ve developed a type of language with my materials and am able to use them like letters in an alphabet by mixing and matching them in novel ways. 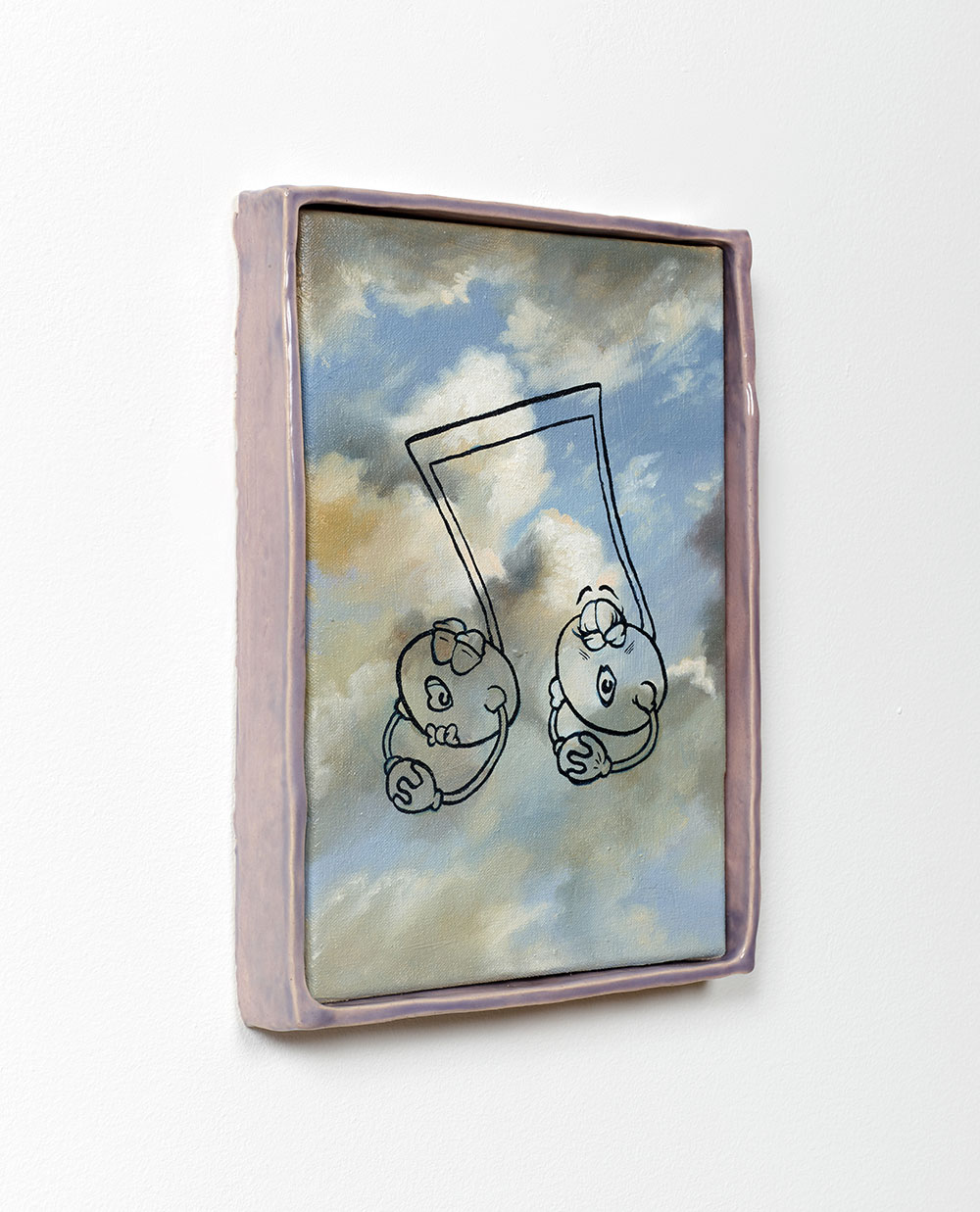 Where do you draw source inspiration for your works?

I draw inspiration from absolutely everything around me! I have a vast collection of images that range from classic cartoons, personal photographs, magazines clippings, Google Image searches, iPhone pictures, Old Master paintings, screen caps, temporary tattoos, clip art, film stills, and beyond. I also title my works from snippets caught in passing, old idioms, quotes and passages from books, or song lyrics. Gleaning materials and inspiration from the world around me is very much the backbone of all my work. 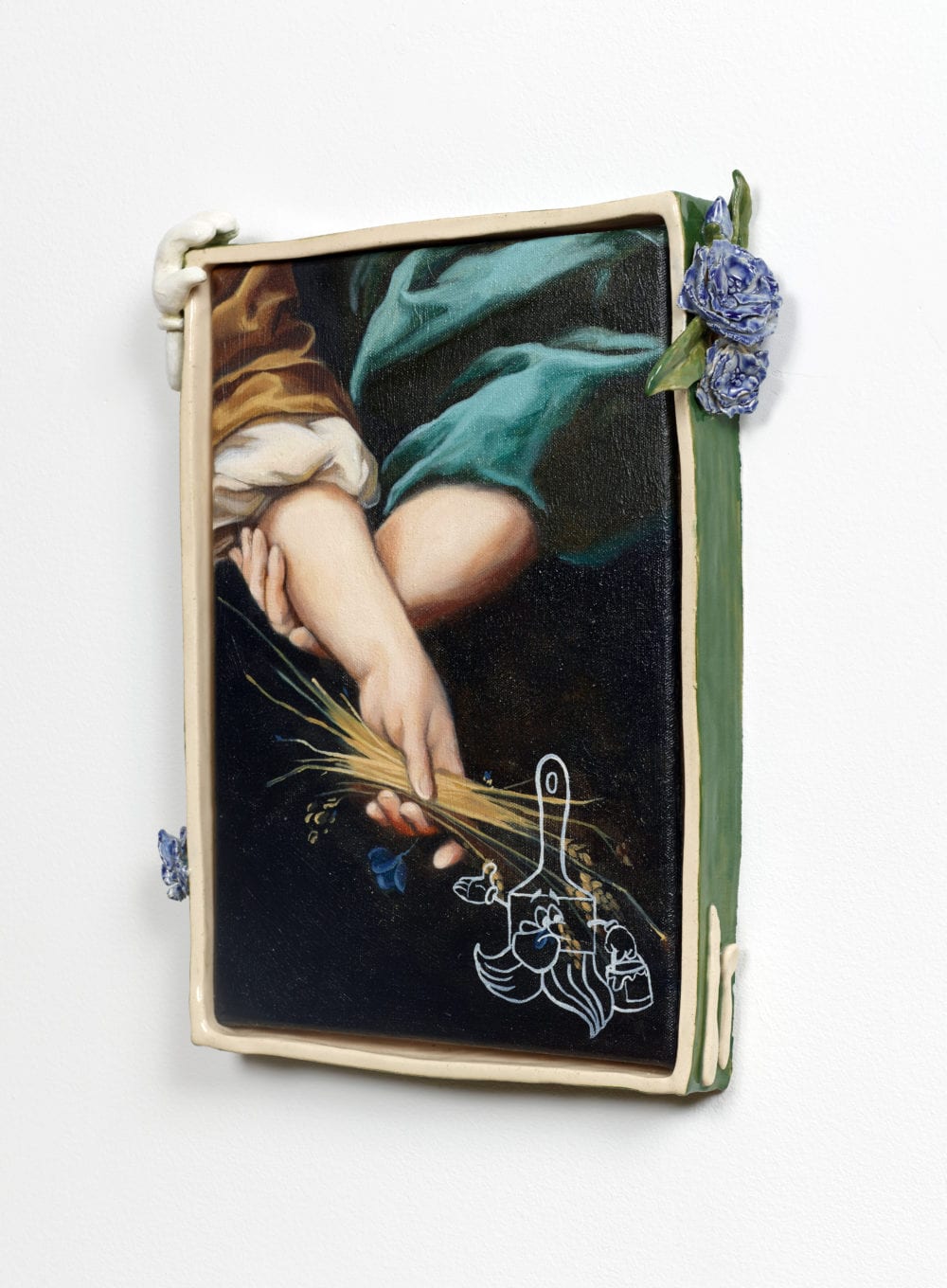 Your work was most recently included in a new exhibit at Thierry Goldberg entitled When You Were Bloom. Can you tell us about the body of work in this show?

There are overarching themes and methods of dealing with imagery and materials that run throughout all my work. However, specifically in this show I’ve included a little bit of everything. There are two mid-sized paintings on hand-dyed linen that depict images seen through the lens of a line drawing. These line drawings are a reference to really early clip art, specifically the open-source clipart-esque drawings of Tom Tierney. I’ve also included a small painting of some fruit superimposed by temporary tattoos and framed in a ceramic frame. This particular ceramic frame has a hand-made ceramic and elk hair paintbrush resting on top. Lastly there’s a small floor work which takes the sentiment of the ceramic frame one step farther by framing a painting between the clenching toes of hand-made ceramic feet.