Swim in Khari Tuner’s Ocean to Discover how Body, and Water, Are One And The Same

The layered subjects in Khari Turner’s compositions are as complex in conceptuality, as they are in physical appearances and artwork medium. The Columbia graduate candidate has developed a unique method of portraiture, where his education in social justice and racism in the U.S. is reflected. In the interview, Turner delves into the intertwined connections that his artwork and his studies have with one another. How statistics of facial characteristics like the nose and the mouth, produce a shorter or longer prison sentence respective to size. He moved his attention to use ocean, river, and other sources of water to mix the paint and other materials that make up his works. 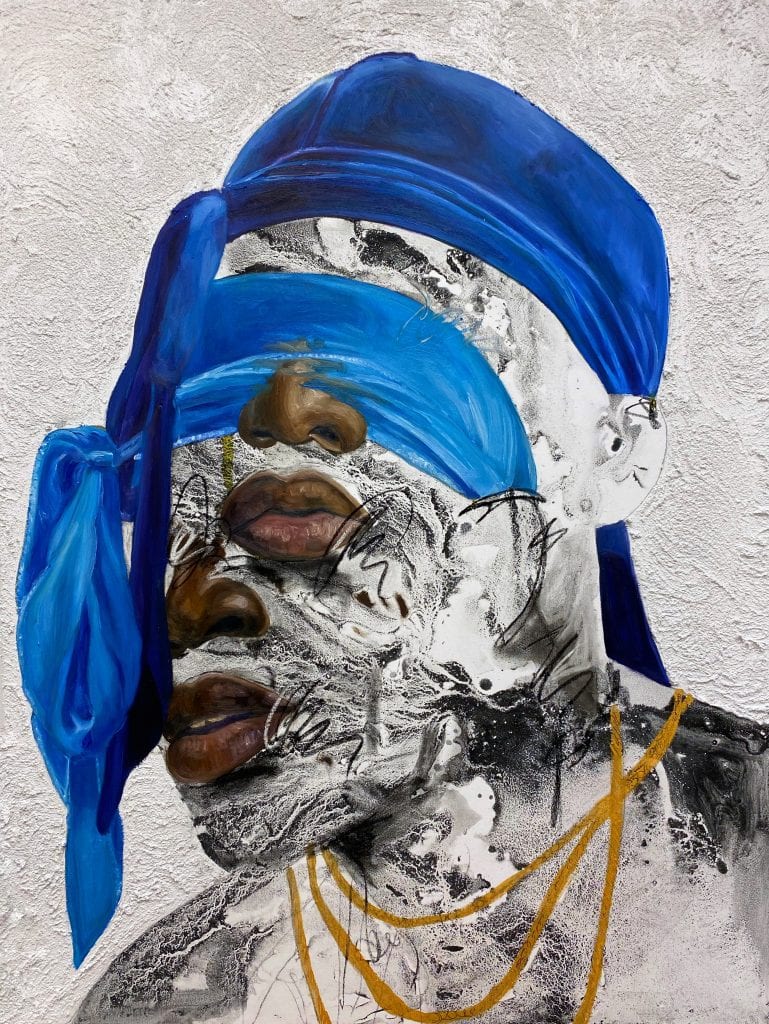 Tell us a little bit about yourself. Where are you from, and how did art first come into your life?

I’m currently a second year grad student at Columbia. I’m originally from Milwaukee, Wisconsin, which is where I was born and raised and pretty much where I stayed until 2013 that I moved to Tennessee to complete my BFA. I graduated in 2019, and moved straight to New York where I have been ever since.  Art was introduced to me really early in life. I used to stay over at my grandparents’ house a lot when I was a kid, and they had art hanging all over the house. Mostly black prints they got from fairs. My grandfather was a draftsman, so he drew a lot of blueprints and drafts of that sort. I’d ask him to make something for me, and I’d try to replicate what he drew for me. Art took off for me in Middle School. It was a way to get away from bullies and that whole thing. I didn’t know exactly which art path I was going to take, but I knew early on that my path was somewhere in the arts.

All over the place! What I mean by that is that as I was growing up, my main duty at home was in yard work. It was during the time when MP3 players were starting to come out, so I had a wide space to think. Because of that, I see I took an eye for the little things in life, and nature. I love photography and the variation of work that artists are able to produce. I really enjoy modern abstraction of the 70’s and 80’s and figurative contemporary art.

Because I learned how to create figurative work, I grew up learning how to paint people and things, and precision in likeliness was what defined talent, I was never taken seriously when I mentioned collage. When I was growing up and taking art classes, I had a perfect idea in my head of what I had to do in order to feel that I’d mastered art; but when I got to that point, and achieved my goal, It didn’t feel like anything that I expected It would. It was a complete let down. So I put on a lot of work into my studies, and tried to make my artworks reflect on justice and what I was living at the moment, as well as what I was studying with regards to social justice and the historical weight the subject carries in our identity. My work took a strange turn at one point, where I tried to stay far away from social justice and its interpretation through my work, and rather look at pictorial emotions.

I’m here every day. Even if I don’t work, I sit in the space and interact with the work. When I’m working I usually come in at around 8 or 9 am and set up to work, and do the things I have to do for the day. Lately I’ve gotten more work done later throughout the day, but even if I don’t plan on getting work done, I come in and stay here all day. A lot of work is wet at the same time, and I have to give it time to air dry. I usually work on 6 or 7 paintings at a time. My biggest thing is that I have to play music in order to feel I have to get my work on.

Do you have a preference in the size of your works?

I like the work to be at least four feet in any given direction, because it has to feel realistic in that physical way. Through figuration, you have to understand that the details are so precise, that they attempt to leave as little room for interpretation as possible. As I move into abstraction, the work leaves so much room for interpretation that it allows for more direct relation to the subject. That’s why I maintain that I at least keep a constant in the size of my subjects. I look to make the viewer review themselves through my subjects. 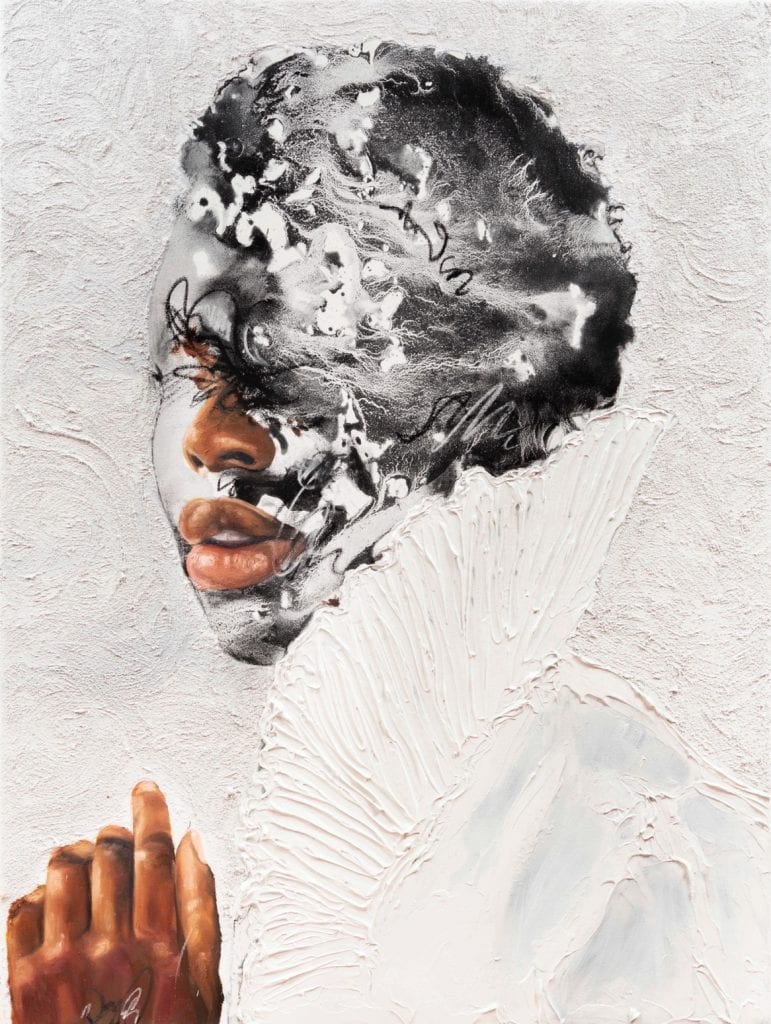 What’s your process like? How do you begin a work?

It’s about finding a lot of references, but it’s also about “excavation” as well. I have to go collect the water, so it takes some time to do that task. I collect ocean water from the Pacific, as well as from the edge of Lower Manhattan, where the docks used to land all the slave ships. Also I get water from Michigan and the Milwaukee River because those are places that are special to me in my upbringing. But where I collect from are special places where things have happened, either historically or to me.  I come back to the studio, and I experiment a lot with how mediums react to the different kinds of water, which makes the initial abstract phaze. I come in with a contrasting color, an idea that turns into a strong figurative sketch. I move from one to the other until I get the desired result. As I mentioned before, the reason why I started working with lips and mouths, was because of a social justice aspect; I started working on some of my new work.

I’ve recently been thinking about the history of water such as segregated pools, and how until not too long ago, black people were not allowed to swim in public pools. All which is ironically connected to the transportation method that brought them all there, was through boats across the Atlantic. I thought about the density of a human body, and that although we are 70% made of water, we should not be as intolerant to water as we are. So I started thinking of black bodies as ocean water. I moved to California for a while, and the ocean in LA is right there. I began to use the ocean water to study and discuss conceptual questions related to water, the body in water, salt, anh how much of our body is made of salt. I read about water having memory, and the memory that the water I’m using is going to have on my work. I look for ports where there’s high chances of a slave having stepped into or been pushed into that beach, and what part of their DNA has become a part of the water’s memory. I try to challenge myself a lot during my work.

If you could have three people over for dinner, dear or alive, who would it be, and why?

Should I want an intellectual dinner, or would I want to create chaos (laughs)? I definitely would have Mark Rothko, because I feel he is super secretive but was a fascinating speaker. Ed Clarke, because he saw paint and was a part of the scene during that time period. And lastly, Hellen Frankenthaller without a doubt. She has so much history. People connect her a lot to his husband, but he died way before she did. She accomplished so much after her husband’s death. And I feel I would love to hear a conversation between these three individuals. They accomplished so much through their conceptual ideas that I would love to get in a room?

How do you make up the composition of your portraits? Are they people you know?

It’s really a mix. I look at pictures of people that I know or see online, but I usually switch it up and modify a bit. Sometimes I mix people, place someone’s nose and someone else’s lips. I feel that this adds some depth to the work, as this lack of representational symbols of gender become invisible in my subjects. I like it that gender fluidity should be as present as the strokes on the surface.

Right now, my plan is to graduate and set out on a trip to get some water. This time I’m thinking about conservation and water clean-up. If I can, I’d love some gallery representation, so I can ease some of the workload. So fingers crossed there.

At the end of each interview, we like asking the artist to recommend a friend whose work you love and would like for us to interview next. Who would you suggest?