Operating since 1932, the Whitney Museum of American Art’s Biennial has showcased a collection of artworks reflecting the current state of America at large. No easy feat, the biennial has grappled with such questions as what exactly qualifies as American art? Is it art representing the US population? Work by American citizens or foreign-born artists?

For the year prior to its opening, the appointed curatorial team traverses the United States, visiting artists in search of the most significant, exhilarating, and relevant work. This year’s result of those efforts, led by co-curators Rujeko Hockley and Jane Panetta, has yielded an exhibition of 75 artists. Diverse in their mediums, interests, demographics, and generations, the included artists together create one of the most groundbreaking groups the biennial has exhibited. Three-quarters of the participants and under the age of 40 and people of color are a majority. Of the 75 artists, only five have previously exhibited in a Whitney Biennial.

To piece together the 79th iteration of the biennial, Hockley and Panetta were drawn to a common thread they saw across the country – the pressure that artists are facing in today’s landscape. Between incurring debt from M.F.A. programs, rising costs of studio space, and the closing of smaller galleries, the burden of working as an artist is ever-growing.

Both a milestone and substantial affirmation in an artist’s career, inclusion in the Whitney Biennial is no small feat. Though each artist’s work is moving, powerful, and important, to celebrate this year’s rendition, we are highlighting just five of our many favorite artists in the Biennial.

Janiva Ellis’s one large painting on view presents multiple landscapes scenes on the same plane. Dominated by color as well as tensions of familiarity and strangeness, Ellis’ creates a hybrid painting featuring various modes of representation. The figures included are depicted in a range of style, cartoon-like and realistic, big and small. Ellis’ work is mesmerizing not just for its scale, but for its composition and detailed elements. 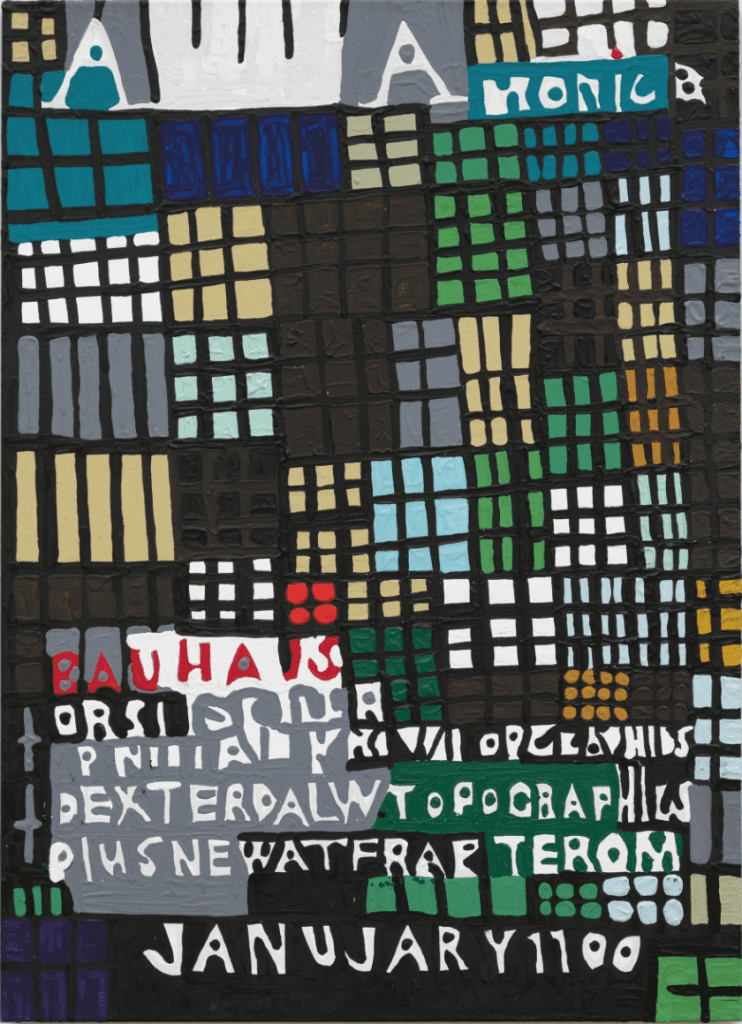 Marlon Mullen uses his painting’s as his own, non-verbal language. On the autism spectrum and unable to communicate verbally, Mullen has created his own, unique dialogue through his recreation of art magazines, such as Artforum and Art in America. Using the actual magazines as his source, Mullen makes subtle changes on his canvas, leaving out letters, thus changing the meaning. Though the source is recognized, Mullen’s abstract reworking lends itself to a personalized conversation surrounding the artist’s work. 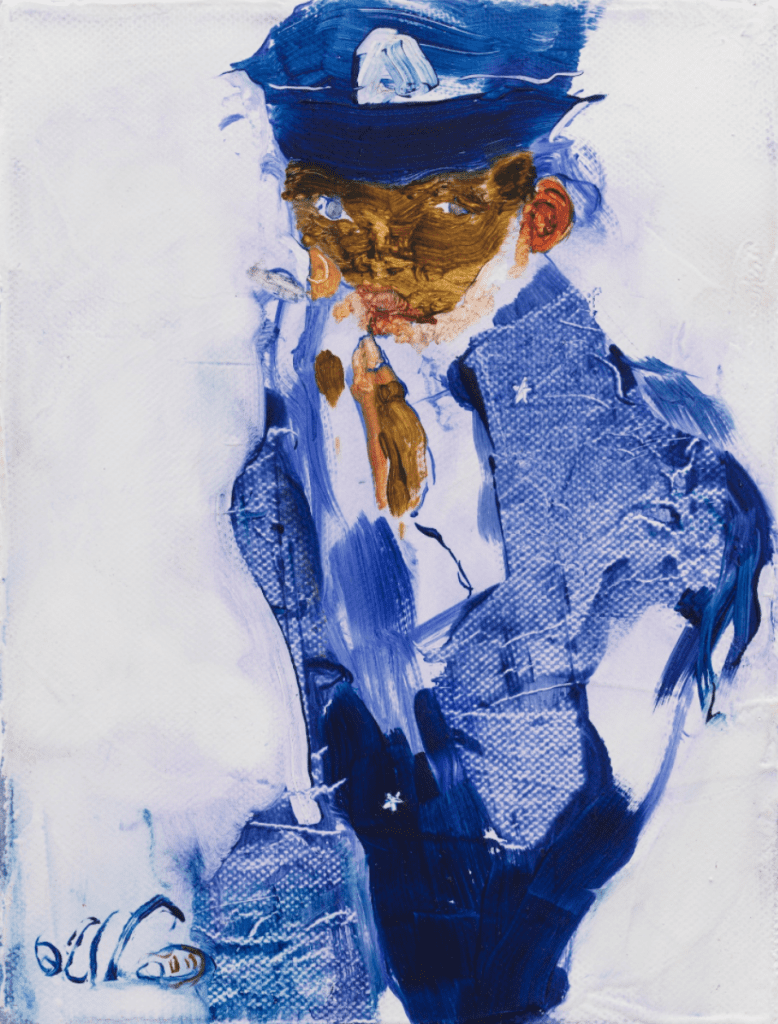 Jennifer Packer’s intimate portraits depict the artist’s family and friends for their humanistic traits. Using gestural brushstrokes, Packer works on her paintings at length, both adding and scraping away layers of paint over time. Though she never reveals the full representation of an individual, she captures each figures essence, conveying a spectrum of emotion on each canvas. Their perceived incompleteness invites the viewer to participate in the works’ narrative while also protecting the subjects’ own identities. 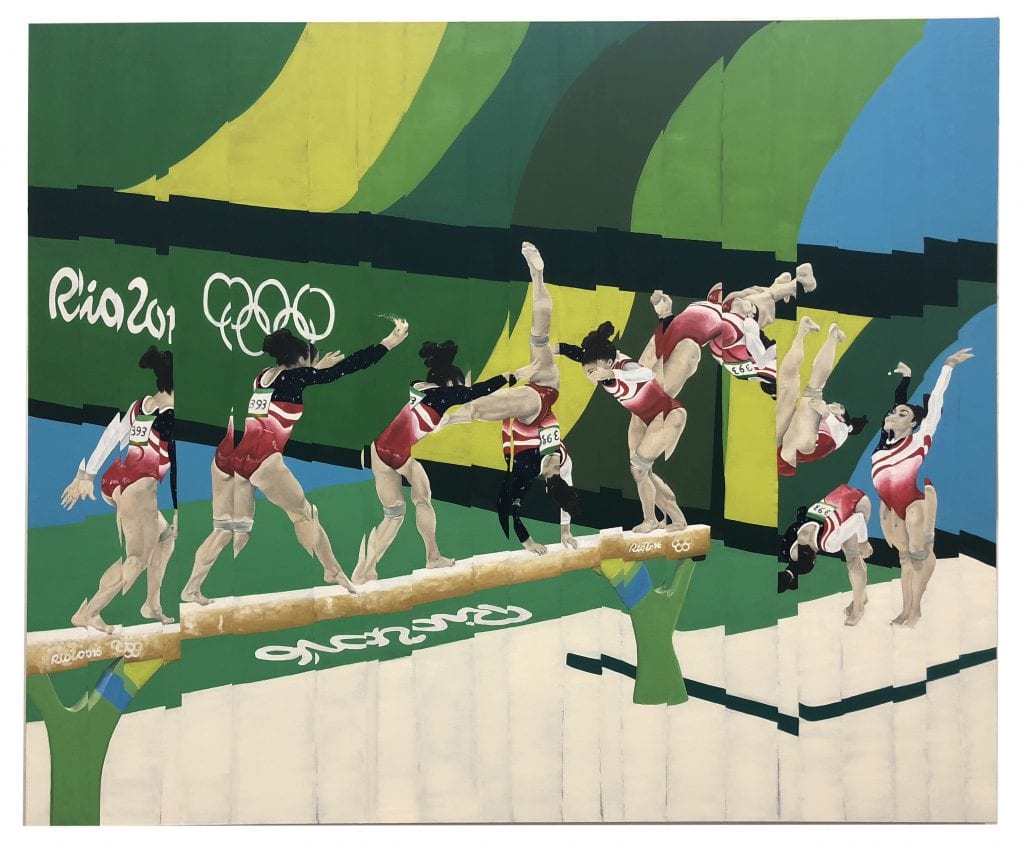 Jeanette Mundt’s four works on view each recreate photo composites of the members of the 2016 gold-medal winning U.S. women’s Olympic gymnastics team. Mundt combines multiple images that break down the moments that would lead to the teams’ victories. Similar to Eadweard Muybridge’s early studies of motion with the camera, Mundt captures the movements as multiple frames making up a single composition. By portraying these iconic moments in this way, Mundt explores the systems in place behind the competition itself. Further adding to this investigation was the USA Gymnastics sexual abuse scandal which broke soon after Mundt completed these works. 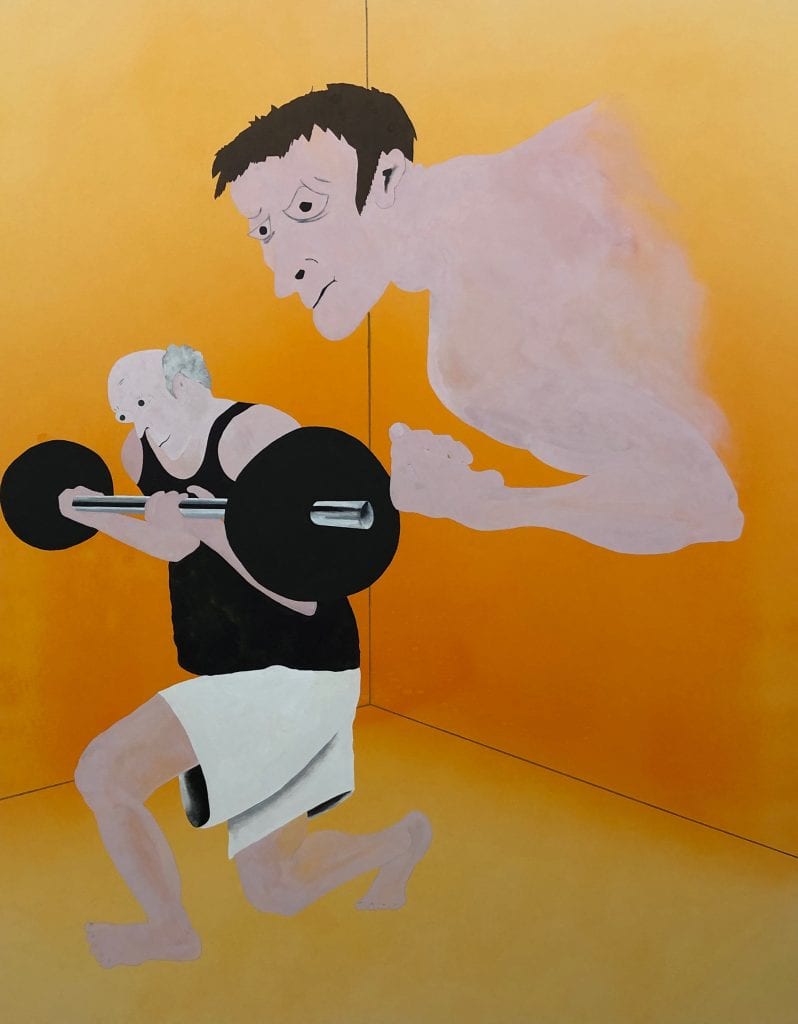 Calvin Marcus’s five paintings on view present various narratives with no clear link. Each work is meant to be interpreted as its own, complete world. The painting’s suggest different themes, with various underlying emotions and tones. Disconnected from one another, Marcus’ works force the viewer to drop any larger meaning associated with the body of work. All very playful in their subject matter, Marcus explains, “The work has no tricks. It is as people see it and that’s fine.”

The 2019 Whitney Biennial will be on view through September 22.