Cesar Piette’s work encompasses a complex process of sketching and coloring, digital rendering, and finally painting acrylic on panel. Characters in his works straddle in the line between subject and object, due to their undeniably sheer plasticity. Originated in Western Europe, Piette derives influence from high classical composition styles as well as Modern cartoons. His eventful artistic career has taken him on several paths of apprenticeship in different types of craft, all of which can be appreciated in full in his most recent project. He channels inspiration from a Western European upbringing in classical museums of Golden Age painting as well as from a lifetime of cartoon and video game consumption; all which generate a juxtaposition of concepts reflected in his style and the subjects created. Read on to learn more about the artist and his unique style. 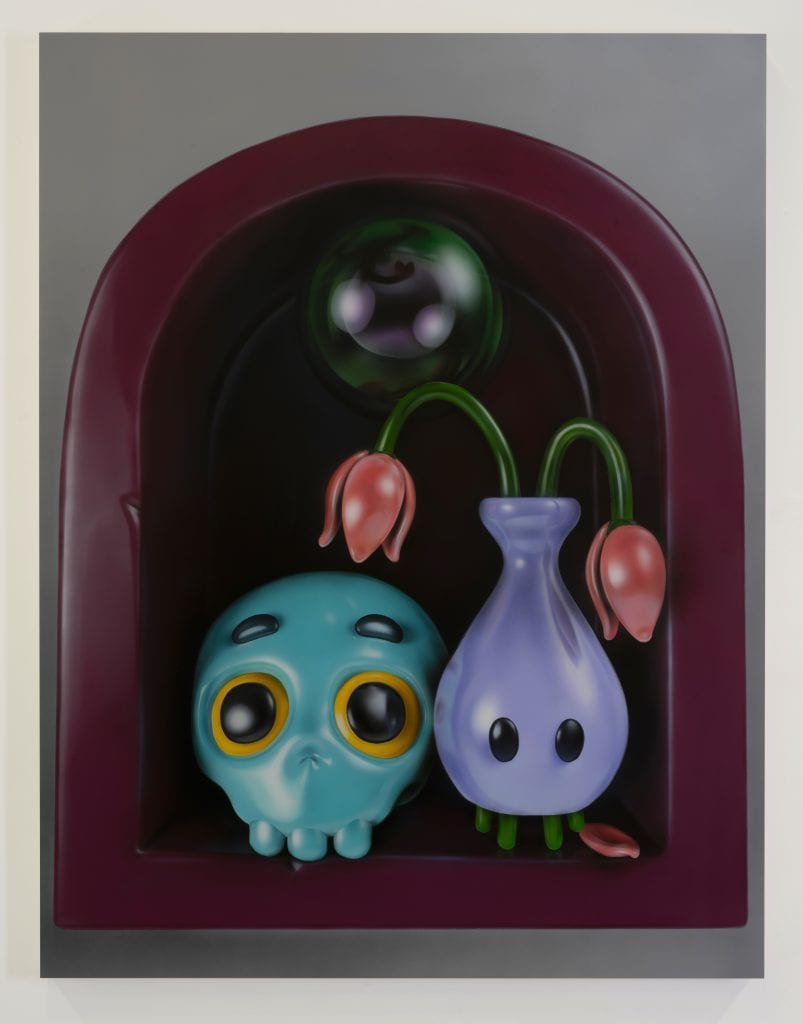 Skull, Faded Flowers and Soap Bubble, 2020, Acrylic on Board, Courtesy of the Artist and Almine Rech

Tell us a little bit about yourself. Where are you from and when did art first enter your life?

I’m from the north of France and I now live in the south, between Monaco and Cannes. Like a lot of people who belong to the middle class in Europe I suppose I was first exposed to art in museums that my parents used to visit in France or Italy during holidays. But younger, I was more interested in drawing, comics and illustrations. After high school I began a master in applied arts (animation, illustration, comic books…)

No. After my master, I started to work directly in freelance for various clients and I did things like medical illustrations, comic books and video games’ concept art during 6 years. The last project led me to a quasi burn-out, I had a huge doubt on what I was doing. Painting seemed to have a better potential to fulfill my aspirations. The only issue is that the approach of painting and illustration is quite different, so I had to study again and try to develop something simultaneously. I did a lot of infructuous attempts in many approaches and hardly looked for myself… Seven years after nothing had ever really happen. Neither the beginning of an original way to paint nor the beginning of a market. I was on the point to give up. If in my previous works I was trying to evacuate my background as an illustrator, I decided to just let it enter and try to deal with it by using some illustrators devices like 3d software and airbrush (something that I never did before but that I was aware of because people in my first school were using them). This meeting between my previous failed years (but useful at the end) in Painting and my newly assumed background drove me on the way. I think you can feel this friction, confrontation, or distance within Representation in my Paintings. Thus turning what is ‘representable’ into an inorganic, artificial, post-industrial, plastic toy aspect seemed to me a viable project. Paradoxically to me the works are really traditional. For the moment I only paint very classical/generic subjects like portraits, landscapes, still lives, nudes etc… and work with a reduced visual vocabulary. Sometimes decreasing the field can bring to a wider creativity. I’m more interested in the subject as vehicle, than as an end. Thus, they combine references from high art with a childish/cartoon, low culture effect.

By looking at the paintings one would say that they are the worst paintings. They are, cartoony, colorful, illusionistic, self-referential, non-narrative, without brushstrokes and sleek… One might hardly do worst, and it was clearly my goal to go towards this direction. One could describe them as funny or cute but I find them quite aggressive. Sometimes digression might lead to the path. Maybe.

At the beginning, I was really into sketching and even coloring my sketches before doing the computer works. I completely avoid this part now. I like to start to model directly on the computer, I find that I have a more intuitive relationship with the software if it’s not too much calculated. Once I’m happy with the picture I have on the computer I do a render, and then start the physical painting.

Because the definitive painting takes a lot of time, I usually paint when I’m in the studio. I let the computer for home, in the week-end or evening. So, when I drop my kids off at school, I go to my studio around 8.30, prepare the airbrush, paint and stencils for the day and then start to paint. I usually don’t think very much when I’m there, I’m more in the action and try to take a distance later. I try to be quite efficient, because I have 3 kids so at 6.30 pm if I wasted my time, the day is over I have to get back home anyway. If I have a particular deadline it happens I paint in the evening but it’s quite rare. I like to listen to documentaries in the morning and bang techno in the afternoon.

Still Life with Rabbit, 2020, Acrylic on Panel, Courtesy of the Artist and Almine Rech

As I said I’m from a different background so I have a lot of previous inspirations in illustration, animation and video games… But during my failed years I also really learned to love Painting, this is an endless inspiration, especially classical/modern figurative art, and more widely painters that question the medium. History of Painting and the software itself remains my biggest inspirations, it drives most of the choices in my work. 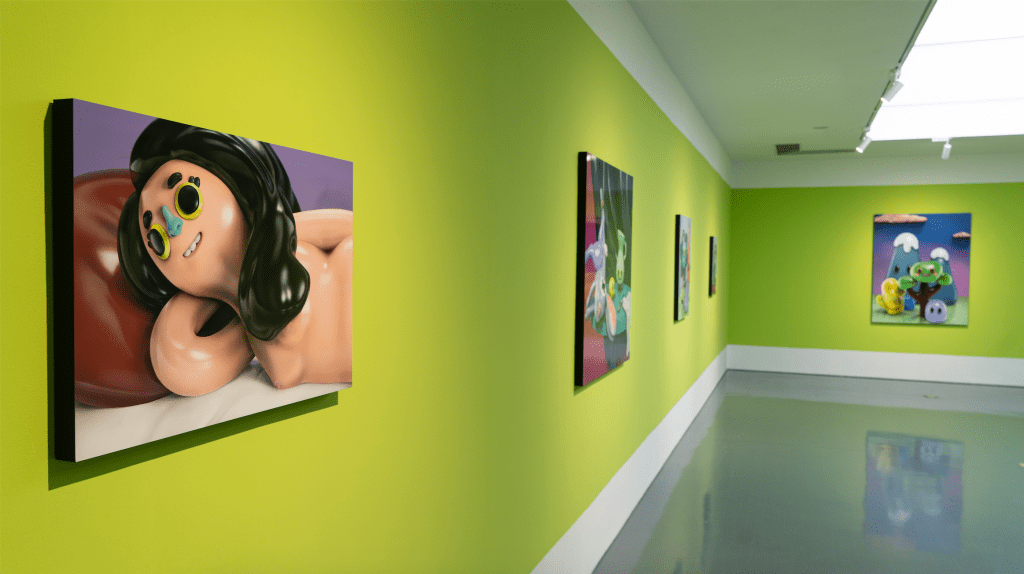 Your style embodies a very hyper realistic style. Can you tell us more about the characters you create?

Despite the cartoon aesthetics that the works could present I’m not interested in it. The way of producing the Paintings imposed itself more than I decided it. I am interested in bringing a tension between artifice and reality into my paintings, as well as creating a confusion on what the viewer is experiencing and thus reducing the gap between painting, digital print and photography. I want to explore the thin border between what is handmade and digitally made. I try to erase marks and give the paintings a machine-produced, immaculate effect. Color has been described as artificial so obviously it has been pushed in the process rather than using monochrome tones. The paintings are cold and technical, they don’t have to see with subjectivity or virtuosity. But at the end I’m still producing an object so, paint, varnish and frame go towards this intention. No matter clean or close to the perfection they seem to be, if you see them in real, you can experience the object.

My pictures are produced with a 3D software in a first step. As I learned alone 3D, simple and minimalists shapes were all I was able to model at the beginning. But it appeared to me to be a relevant solution. I mainly use primitives to create the characters. Primitives are the first, geometric objects that you start to use, deform or add to another shape, that you can find on any 3D software. The use of primitives gives them a simple, toy aesthetics aspect. Plastic rendering is also one the easiest material to set up in the software and offers a great range of value. The clean shapes help me to create a deep volumetric space as I can focus on it. If you have a lot of details it’s always more difficult to pay attention to value. One of the first goal of a rendering software is to simulate something realistically, so it has to see mainly with Representation. I doubt it works very well with abstraction. So, the works that I’m creating are the results of my incompetence with the computer on one hand, the desire to carve into the paintings as if they were windows on another hand and thus trying to comment on the artificial, virtual, synthetic world we live in through the Screen. 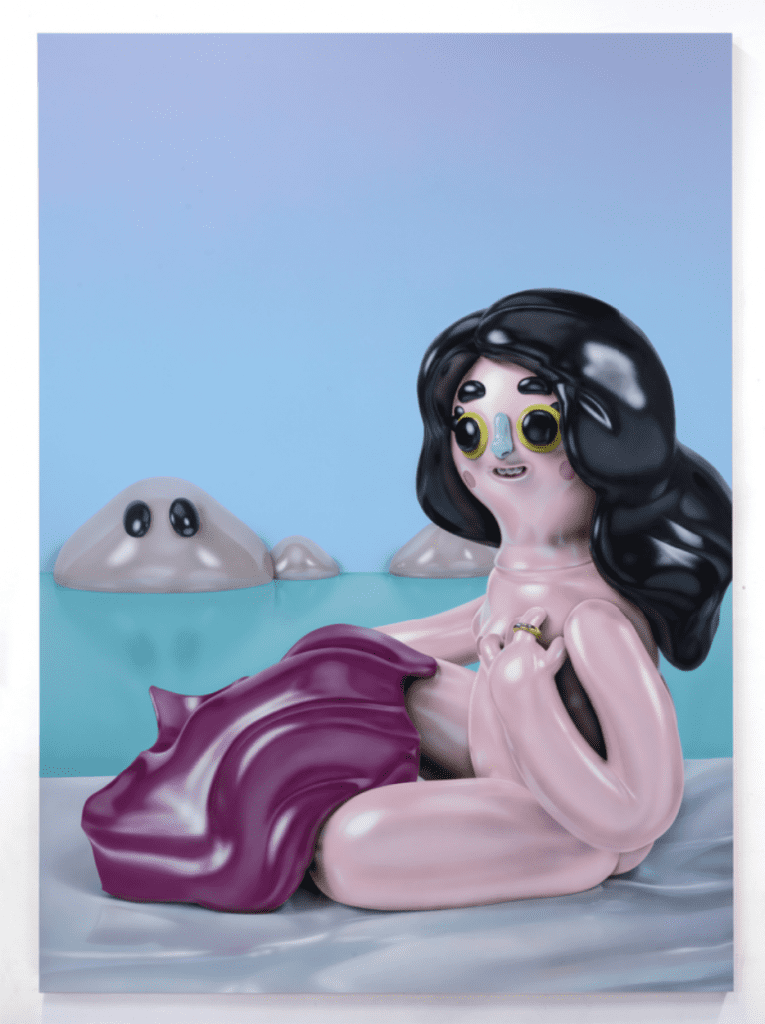 Nude on the Sea, 2020, Acrylic on Panel, Courtesy of the Artist and Almine Rech

Does your work reference any Art Historical Movements?

I can’t say that I’m referencing a particular movement. I’m interested in Figurative Art in general and all the variations that you could find until abstraction, but not abstraction itself, I guess. That’s where I am now. But I’m aware that the paintings can bring references like classical Painting, surrealism or Pop art (especially in the clean, anti-subjective, cold approach to Painting).

Have you seen changes in your work in lieu of the worldwide pandemic?

I don’t think, or maybe it’s too soon to say it. My work is more about the how to paint than the what to paint. I try to stay open but I’m not really interested in bringing too much daily life references. I recently did a painting of a black model for a group show at Almine Rech Shanghai. I was really hesitant to do it because it was during the Black Lives Matter movement and to paint someone of color can be connoted. These events made me realize that there were no reasons for me not doing it. Black people are around as much as white people, and soon or late I would have to face that I have to paint black models. So, I guess it was the first-time that life had such an influence, it just helped me to do it. But on another hand the first and main reason why I was interested in, was because plastic reflects work better on dark tones. In short even you can withdraw some connections to the social sphere from what I do, I don’t think it has a too strong grip on it. My work is mostly self-referential to Painting. My paintings are not the purest form of paintings that you can find obviously but it’s still challenging to try to think on how a painting could be done. To me to be self-referential can be seen as an homage to human exception. A monkey can paint but he can’t produce something that explores painting itself and its tradition.

Fille Fenetre, 2020, Acrylic on Panel, Courtesy of the Artist and Almine Rech

At the end of every interview we like to ask the artist to recommend a friend whose work you’d love for us to interview next. Who would you suggest?

The only regular contact I have with an artist is with Gioele Amaro, an Italian painter based in Paris.