Tony Toscani’s Giants Face the Crushing Weight of the World

Tony Toscani didn’t always see himself as an artist. In fact, he was an aspiring punk rocker at one point before finding his place among the creatives of New York and eventually his own sanctuary in Brooklyn. Once deciding art was his calling, Toscani embraced abstract ideas about portraiture and how he could make this discipline entirely his own. Imposing giants occupy the entirety of his scenes, unbothered by their role as caricatures of the future. Proportions are skewed to fit his narrative about the potential evolution of humans – with our hands and limbs eventually surpassing our heads in order of importance for survival. You won’t need such a large brain if your attention is consumed by a screen, he figures. On the canvas, he relates a certain feeling of weariness or boredom plaguing his generation, as it seems the more things we are given, the less satisfied we are. The figures in his work represent a universal contemporary condition: melancholy. It’s as if we are peeking in on them right after a big sigh. While his subjects stem entirely from his own imagination, the subject matter supports an entire generation, one in which technology is directly and indirectly impacting.

Tell us about yourself. Where are you from and when did art first enter your life?

I was raised in your typical run-of-the-mill suburban neighborhood in southern New Jersey just outside of Philadelphia. The area was overrun by diners and shopping centers. So there really wasn’t anywhere one could go to see art except for in the city. There were just a few record shops here and there and a few skate spots where my friends and I would go to and skate almost everyday. That was about all that our town had to offer in terms of art.

It wasn’t really until my first year of college where I decided to take up a few art classes. I was a musician myself and played in punk bands all throughout my youth, so I felt that if I majored in art it would be a safe bet that I could graduate with at least a Bachelor’s degree.

As time went by I started to obsess over painting and my routine began to slowly morph itself. I preferred to spend my weekends at the Philadelphia Art Museum instead of going to punk shows. My addiction to collecting records transfigured itself into collecting artist monographs. Once I realized I had just been painting everyday up until my graduation I knew that I should just pack up my things and move to New York and paint for the rest of my life. So I did just that. 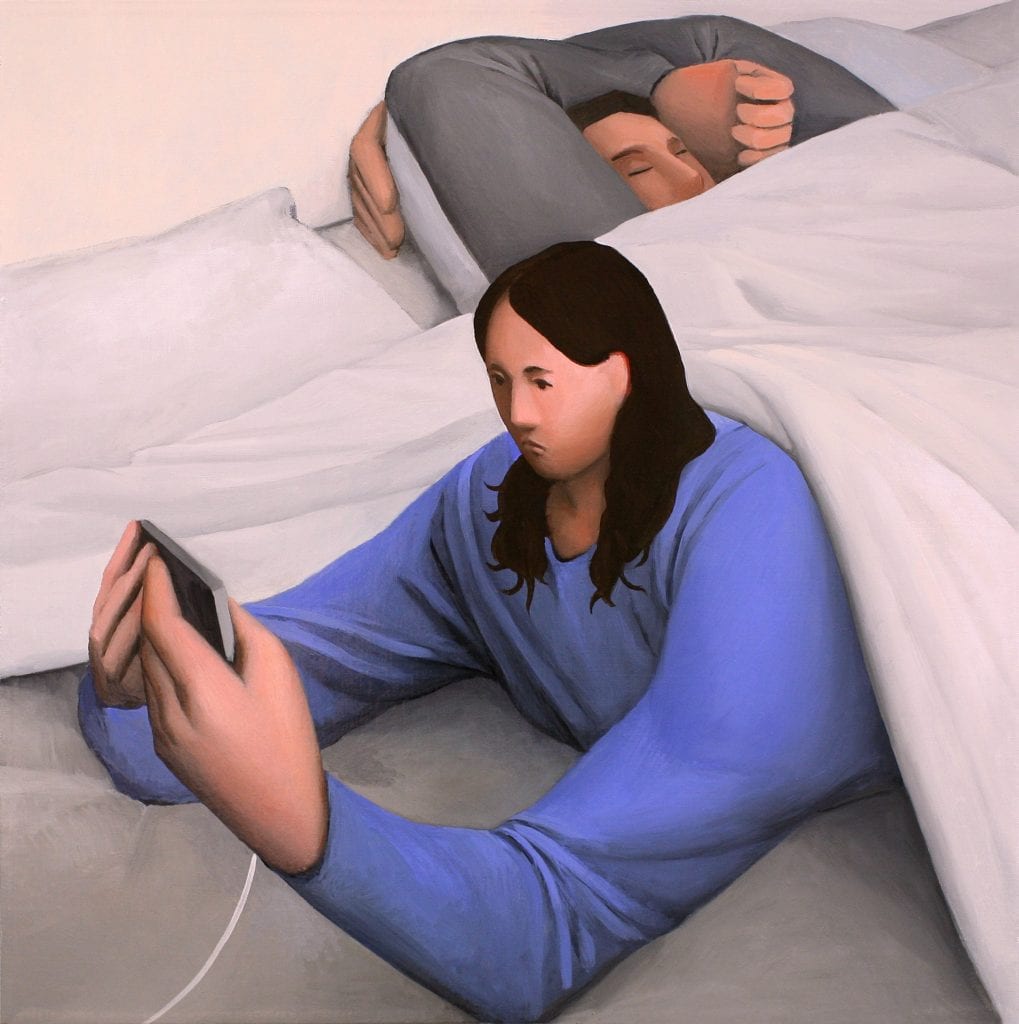 What does a day in the studio look like?

Typically each day starts off from an idea or sketch. After constantly reworking that sketch over and over, a more coherent stripped-down ink drawing is made. That finished line drawing is then transposed onto a primed and ready canvas that has been previously prepared.

Once the preparation drawing is complete and appropriately accommodates the canvas, I then start the careful painting process. The actual time it takes for me to complete a painting can take anywhere between two to four weeks, but the total overall process from the start of the idea to the finished product can take about one to two months. That is why I always have something that I am constantly working on in the studio. If I took a break or paused I would never finish anything. There is barely enough time for me to rest. 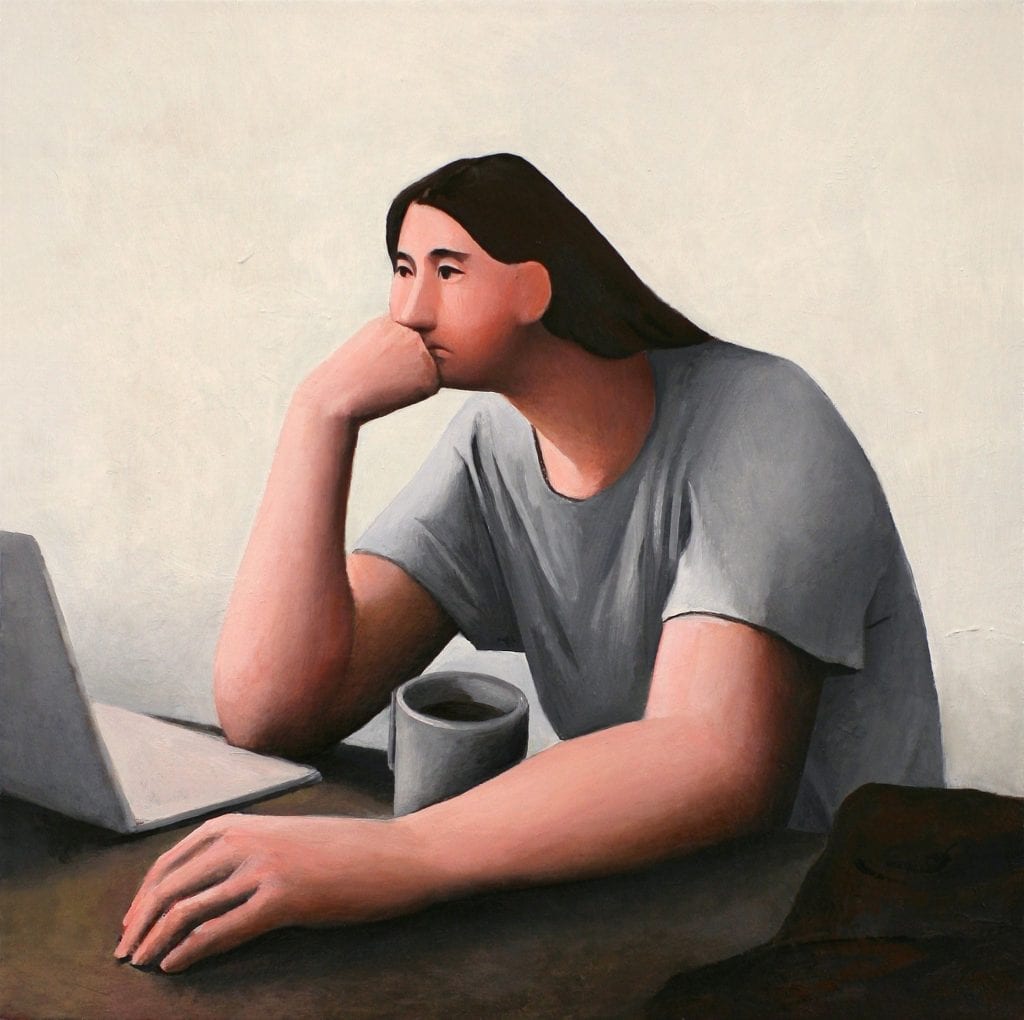 Daydreamer, 2018. Courtesy of the artist.

Could you talk a bit about how you come to emphasize certain body parts more than others in your work?

Well, in short you could say that the figures come from my own personal interpretation of what human evolution may look like thousands of years from now. That is to say, a head may appear to be the size of a potato because it signifies that the original size is of no longer any relevance. Its shrunken proportions seem to offer up a more contemporary solution in order to better accommodate our phone screens so that we can explore and navigate our digital realm more easily.

However, being distracted by our virtual doppelgangers doesn’t necessarily mean that our other limbs must take on the same burden. I figure that it would only make more sense for them to continue fulfilling their primordial duties in the real world. And in doing so, such a continuous exercise could eventually cause an exaggerated growth spurt through thousands of years of evolution. The result of which would be a behemoth looking person with large thick limbs with an almond-like head. 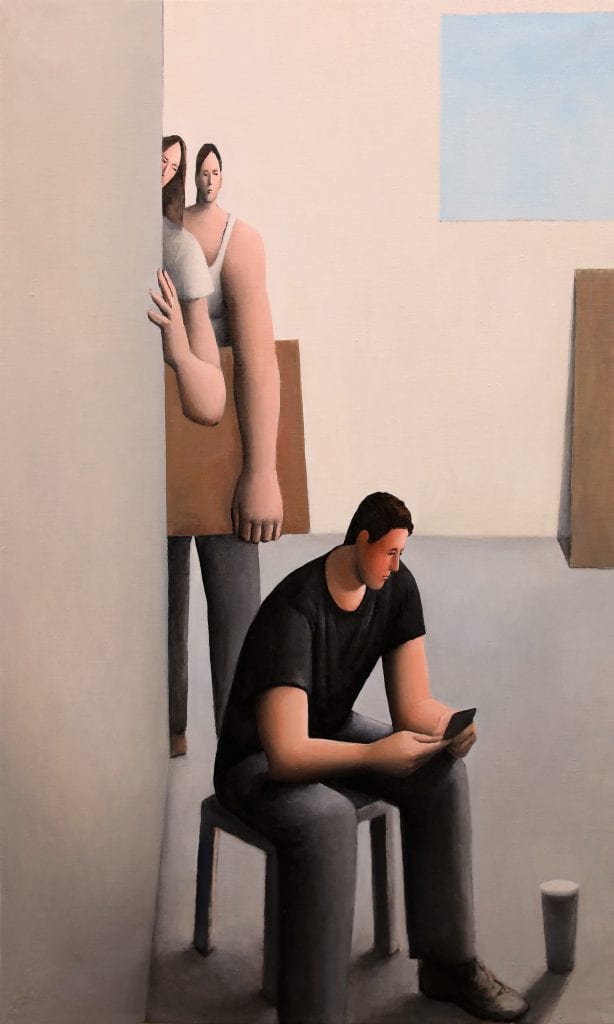 Distracted At Work, 2019. Courtesy of the artist.

Have you faced many challenges in getting to where you are today?

Of course, the strange thing is I feel like I continue to face a million challenges with every painting I make, but I always fear I haven’t really progressed any further from when I first started. That is what I think may be the toughest part about painting really. It never really gets any easier. It only continues to grow more difficult as you progress on your path as an artist. It is as if the more experience you gain the more you learn of your own ignorance. I just hope to one day reach the precipice and make a painting that I can truly be proud of. 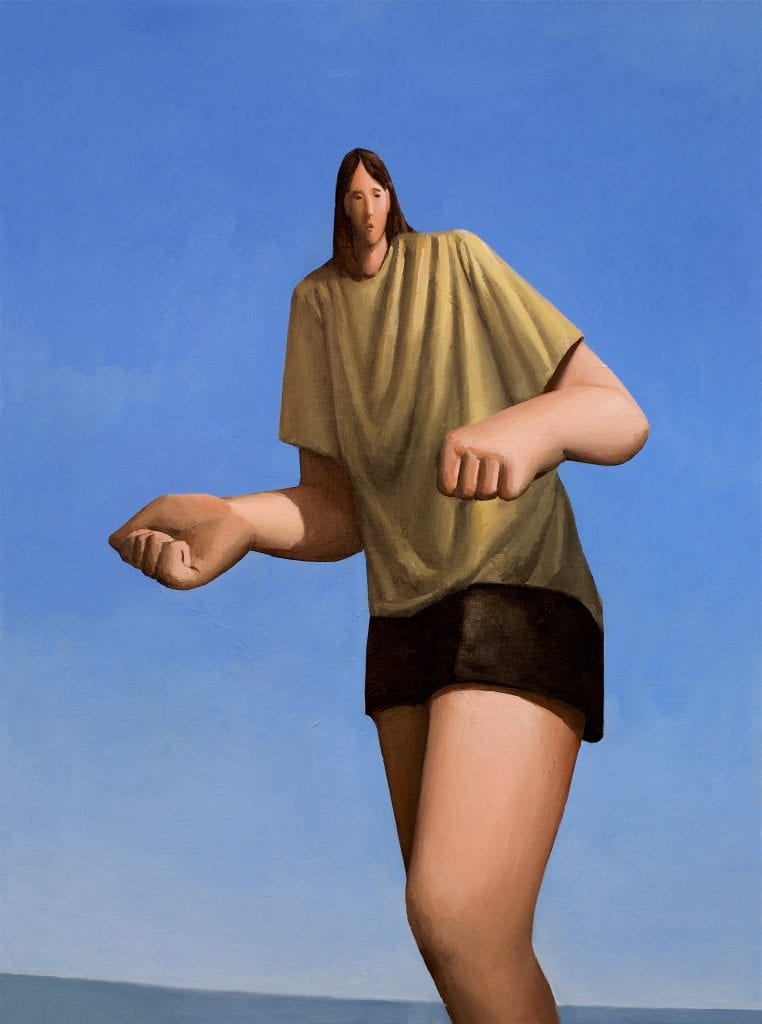 Frightened Giant, 2019. Courtesy of the artist.

You had your first solo show at Massey Klein last fall. How did your gallery relationship come about and what has been the most rewarding part?

Both Ryan and Garrett, who co-own Massey Klein together, took a chance in showing my work and really believed in it before anyone. My work was first introduced to Ryan through a former coworker of mine from when I was an art handler at Sotheby’s.

For me above all, I am just so happy to have people who support both my work and I. It has always been difficult for me to exhibit anywhere in New York since I am not a very good socialite. I have always poured every ounce of my being into my art making it nearly impossible for me to do anything else. In fact, I felt as though the more I painted, the more challenging the paintings became, making it even harder for me to go out and be sociable. This made all the effort seem futile.

But, despite all that, Ryan and Garrett believed in my art deeply enough and chose to support it. I truly believe that if you work really hard and pour all your energy into what you do, there will always be people out there who will support it.

Selfie With Skull, 2018. Courtesy of the artist.

What medium do you work in?

I work primarily with oil on linen.

Has your work always taken on its current style?

It hasn’t actually. The current style is still so new for me. I have only been painting this way or similar to it for the past two years or three years. Before that, I think I must have gone through twenty or so different stages ranging from complete abstraction to photorealism to just about everything in between.

The past twelve years for me has really been like one massively large investigation. And as ridiculous as it may sound I still feel like I haven’t quite found my style yet. 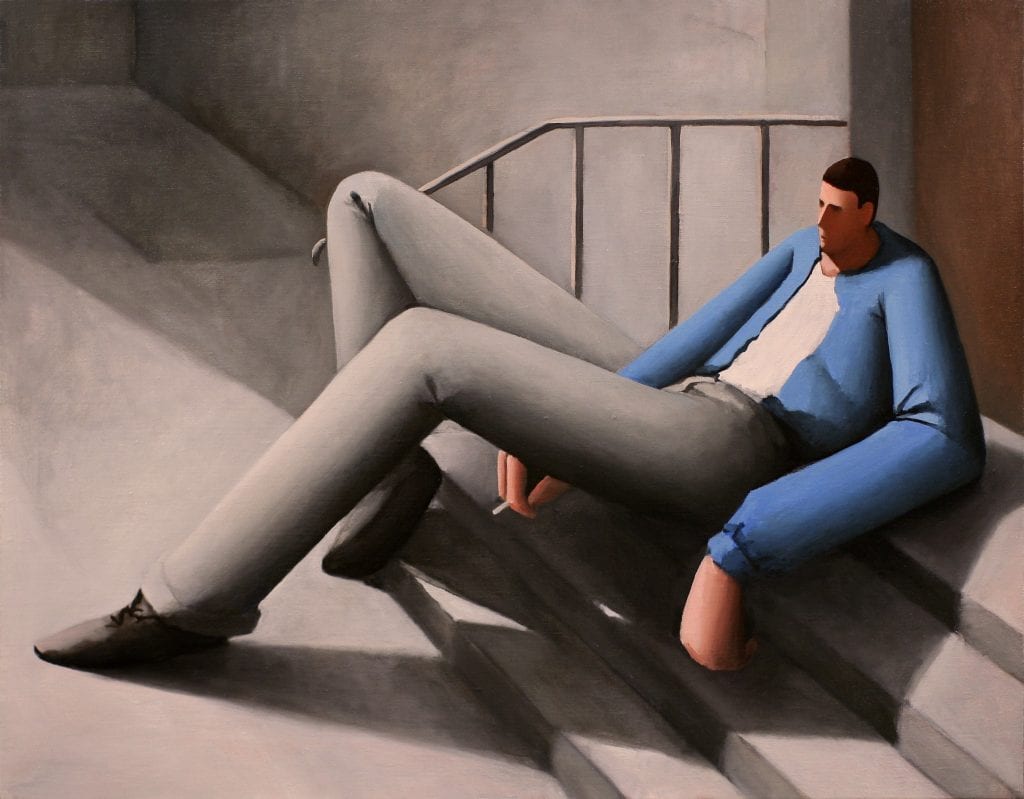 Are there any historical movements or individuals that have influenced your work?

I am mostly influenced by our perpetuating apathetic behavior throughout our history. It is one of the leading causes for our melancholy and is what makes us uniquely human, much more so then a specialized contemporary theme that narrows in on a social climate during a specific time period. That is why my work is relevant to anybody from any time. It is just as personal as it is timeless.

In terms of artists whom I admire, there are two who always come to mind, Adehla Lee and Picasso. 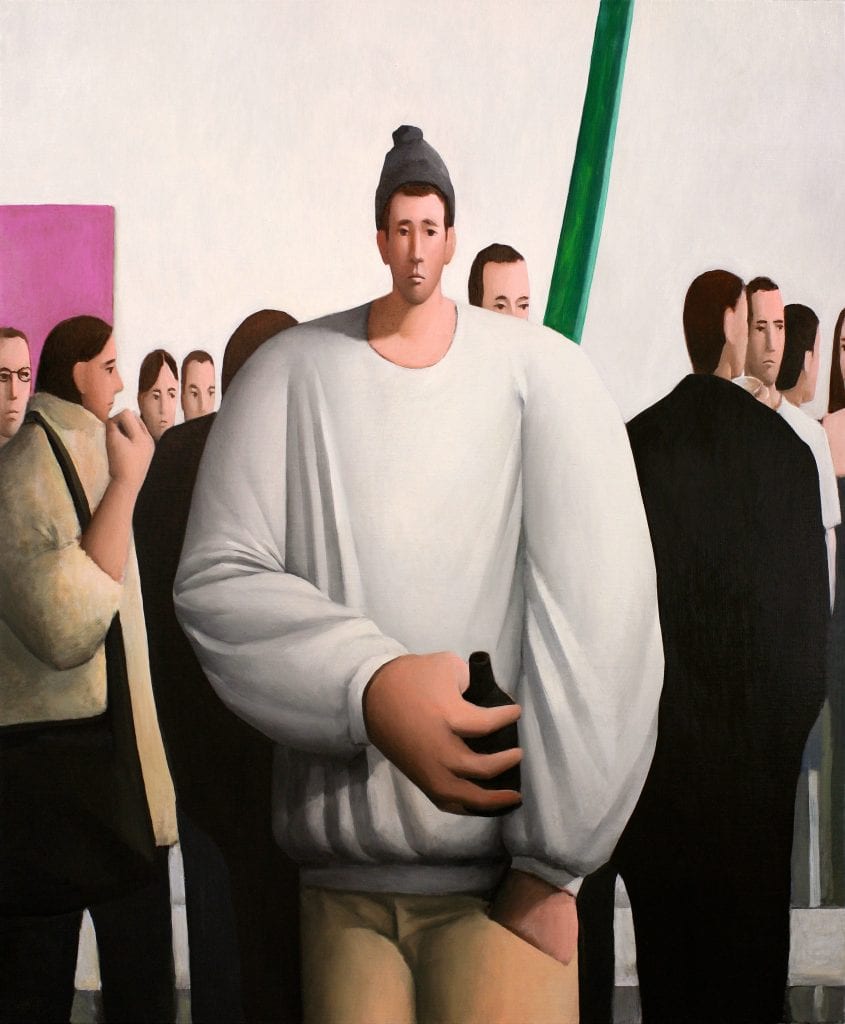 Social Anxiety, 2019. Courtesy of the artist.

Right now, I am just trying to focus on my current work and create my next series so that I can get a sense of what I hope will make a great upcoming exhibition. 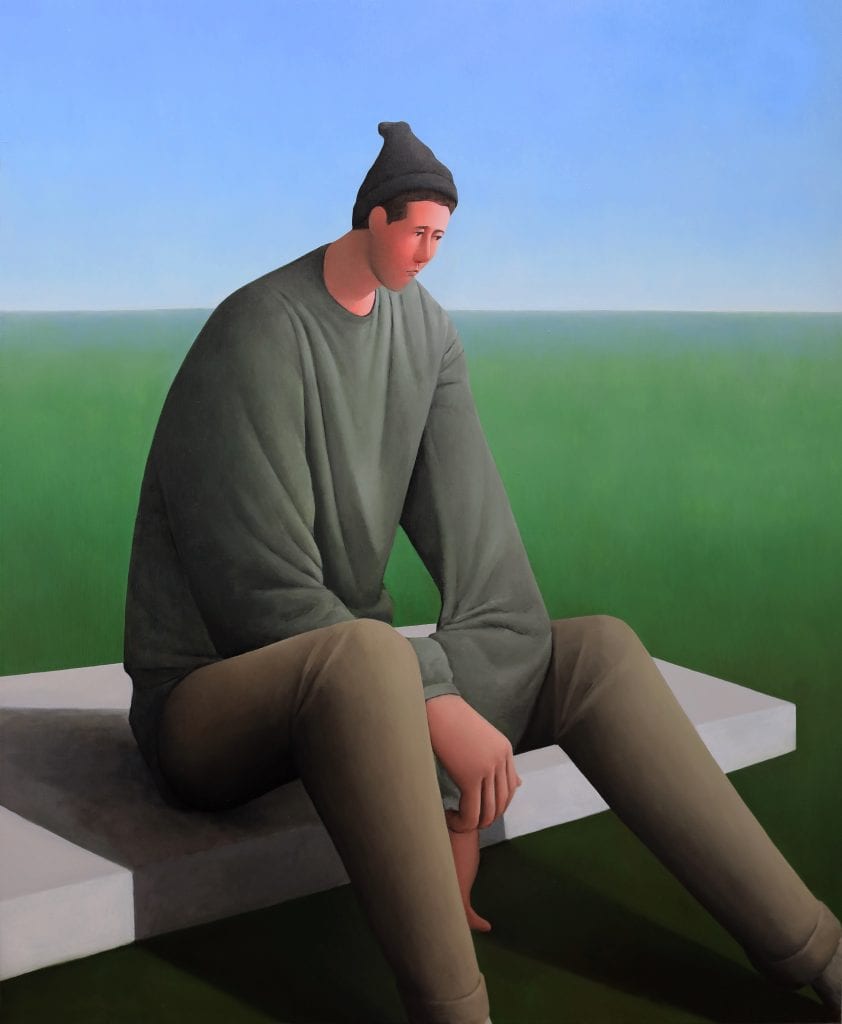 At the end of every interview, we like to ask if you have any other artist recommendations. Whose work do you suggest checking out?

The person who inspires me the most as an artist is Adehla Lee. She is my partner and my best friend, but more importantly an incredibly important artist who constantly challenges what can possibly be done with painting and with art in general. She always follows what she believes in and tries creating something beyond her own limitations. It is inspiring to see its affect take form to the point of complete invention. In fact, the paintings are so complex and complicated that it would require a lifetime to fully recognize and deconstruct the entirety of a single painting. Every color choice and concept has some specific reasoning behind it. And every painting is executed this way. She is true innovator. I would highly recommend checking out her work.