Though he did not set out to be an artist, Barnett Cohen knew from a young age that he wanted to be surrounded by talented and creative people. Fostering an art practice that spans categories, Cohen has no desire to convey certain messages with his work. He simply presents the culmination of his many ideas and a variety of source material, leaving the viewer to make of it what they will. Cohen is currently based in Los Angeles, CA. 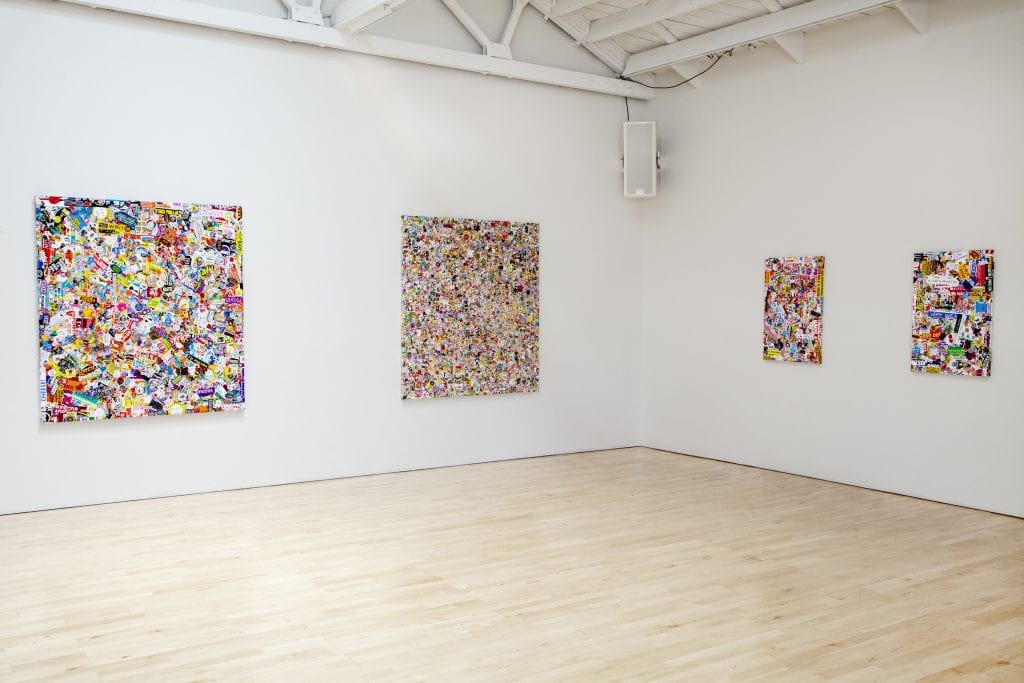 When did you first become interested in pursuing art?

When I was a kid, my family watched the Oscars religiously. It appeared a glamorous and an exciting affair, and I wanted to leave where I was from to be wherever it was happening: to be in a room full of talented and creative people. As Mapplethrope said, “Long Island was a great place to grow up but a better place to leave.” I grew up in Georgia and I relate to that sentiment for multiple reasons. I initially set out to work as an actor in New York and London and then, through a brief but charged relationship with photography, found myself becoming an artist. What started as a flickering idea as a child evolved from a high school pastime into tentative attempts and is now urgent lifework. 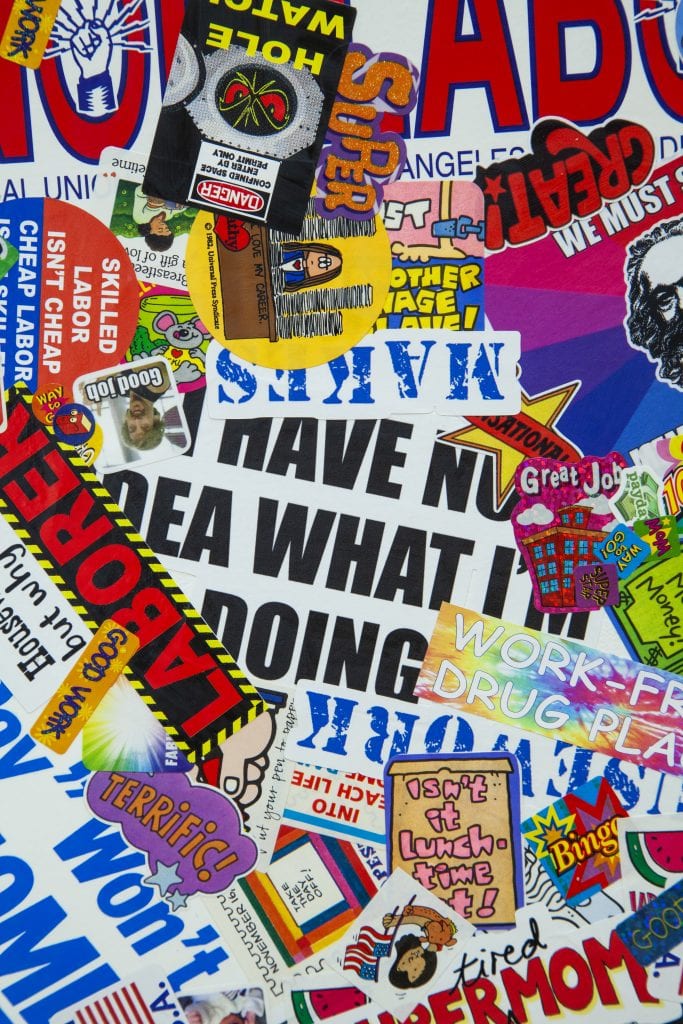 You work across a range of medium – does working across categories help to keep your art practice evolving?

I need multiple containers for my many ideas, and I find that operating in distinct mediums gives those ideas sufficient space to breathe without overlap. Prior to creating the sticker pieces, I played around for a long time with how best to articulate my relationship to language and symbols, my interest in their formal qualities. What did not work on canvas migrated into my performances and particularly into my daily practice of automatic or free-writing, which is its foundational element. For better or for worse, the machine in my head generates a lot of ideas. Some are articulated through my sticker pieces and conceptual objects. Many of them appear within my performances. Most wind up on a long list of disembodied ideas on my phone that will never see the light of day. 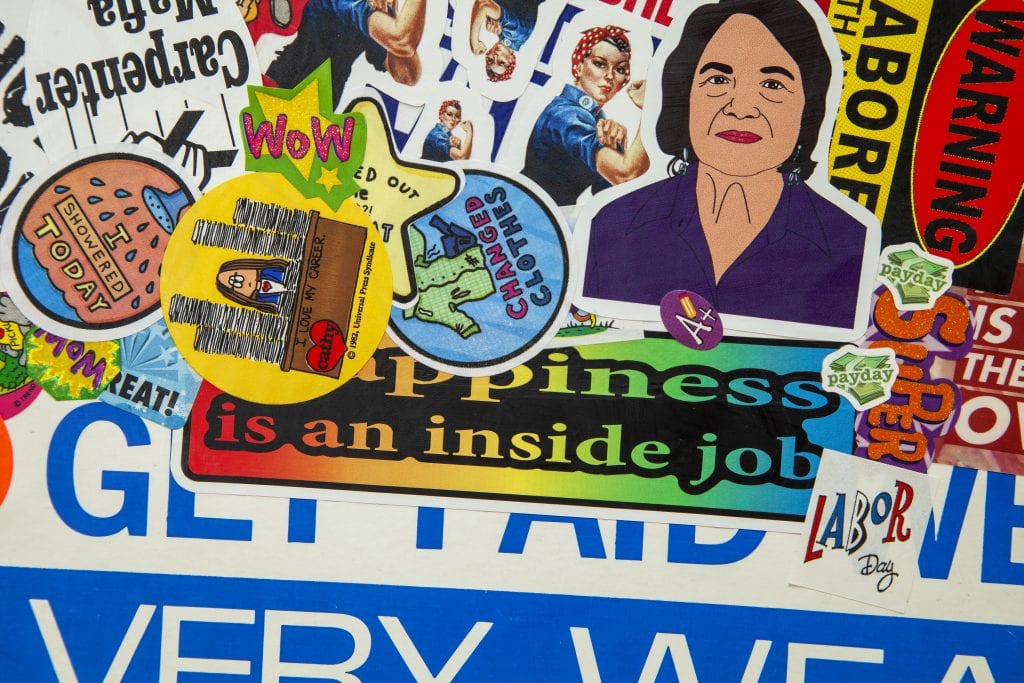 Has performance work always been a part of your practice?

Yes and no. I started out in the theater and have formal training as an actor and yet when I entered the world of contemporary art, and more specifically the world of performance art, I remained on the sidelines scratching my head. A lot of performance art tends to circle around a singular act or gesture and I was not entirely certain how I could bring my interest and love of theater–and particularly the theater of the absurd–into an art context while dispensing with the need for narrative. I started by simply writing down my thoughts every day I was in the studio to better acquaint myself with what I was experiencing. That practice, which I still maintain, lead to poetry readings, which I did not enjoy. A couple of years back I started workshopping the texts with actors and those workshops eventually lead to performances. 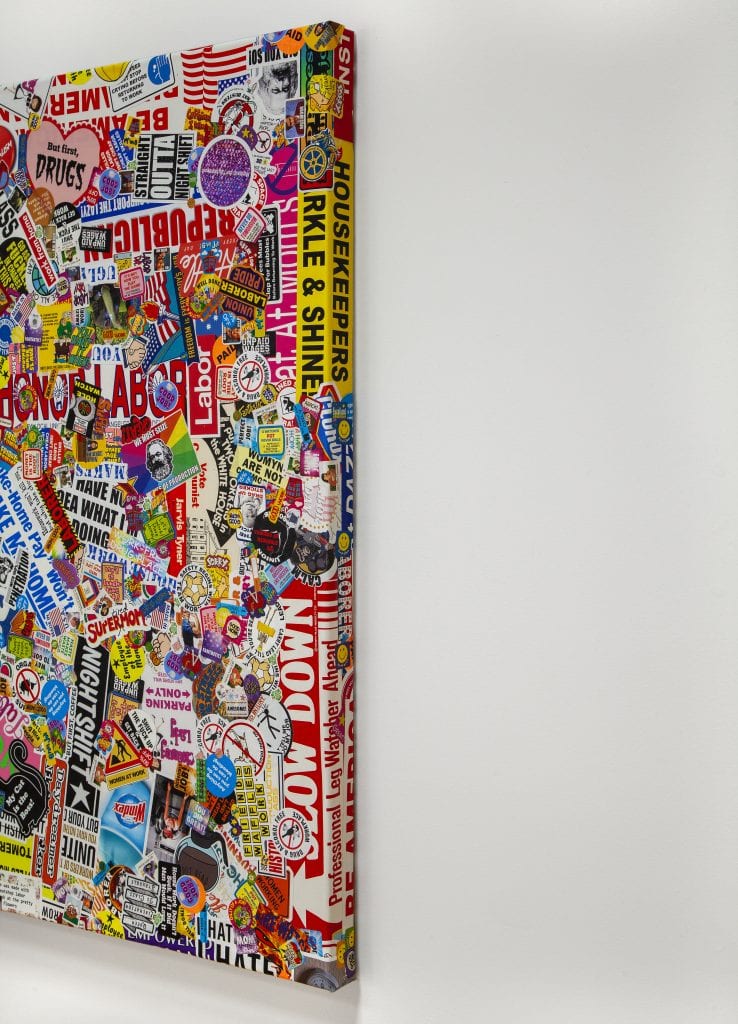 Are there any ongoing themes that your work addresses?

Everything and nothing and at all once. I am a curious person with a short attention span who spends a lot of time intellectually multi-tasking. Beside me, as I write, is the excellent Marxist magazine Commune, a book by the art critic Arthur Danto entitled What Art Is, and I am listening to To Whom It May Concern, the latest track GHOSTEMANE just dropped on SoundCloud. All of this will somehow wind up in my work. I am interested in dismantling the link between thought and self, that tired Cartesian narrative that our identities are inextricably linked to whatever we think. Whether through the sticker pieces or through my performances, thoughts and ideas (and their manifestation via signs and symbols,) become shapes and forms with which to play. I have zero desire to say something with my work. I am more excited in overlapping, injecting, and complicating multiple ideas from multiple sources within each piece and within the totality of my practice, and trusting the viewer/audience to form their own idiosyncratic connections. 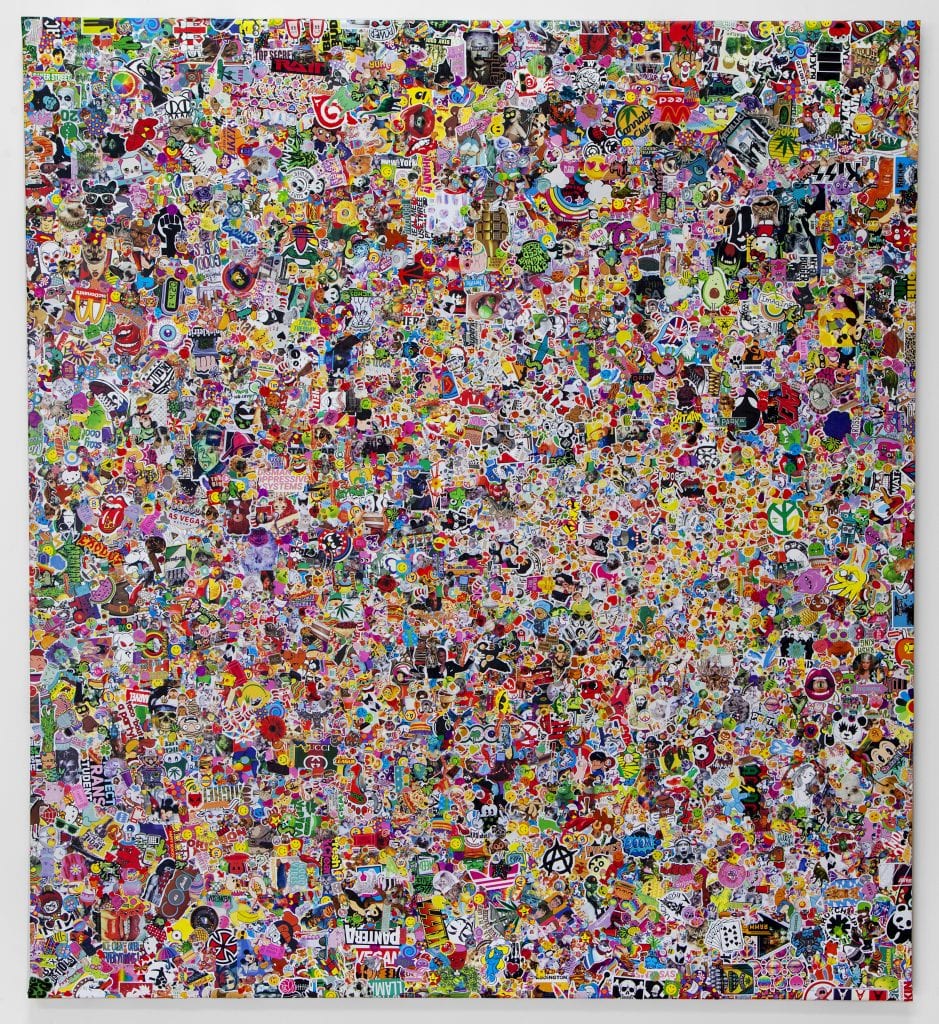 How does working on the west coast differ from the east coast?

I came to Los Angeles to attend graduate school at CalArts and thought maybe to stay a few years. While I still quibble with LA sometimes as a city and yearn just to walk from one place to the next as I did when I lived in Brooklyn, it graciously provided me with a much-needed geographic and psychological break with the East Coast. While I am generalizing to an extent, pedigree reigns supreme on the East Coast. People are heavily invested in their institutions whereas on the West Coast, in Los Angeles, there is a greater sense of fluidity and freedom. (It’s not for nothing that people seem to come to LA to reinvent themselves.) To become a more dynamic artist, I needed to be well away from the standard narratives promoted by the educational-industrial complex and the market. I think often of Jack Whitten and what he wrote in his log (collected in Notes From The Woodshed) about why he became an artist: “My objective as an artist has never been to become famous or to become a millionaire. My objective is to become a better person…to achieve a higher level of consciousness…to expand the notion of freedom…to become love…to preserve idealism as a necessary ingredient of being.” I had to come to Los Angeles to figure that out for myself. 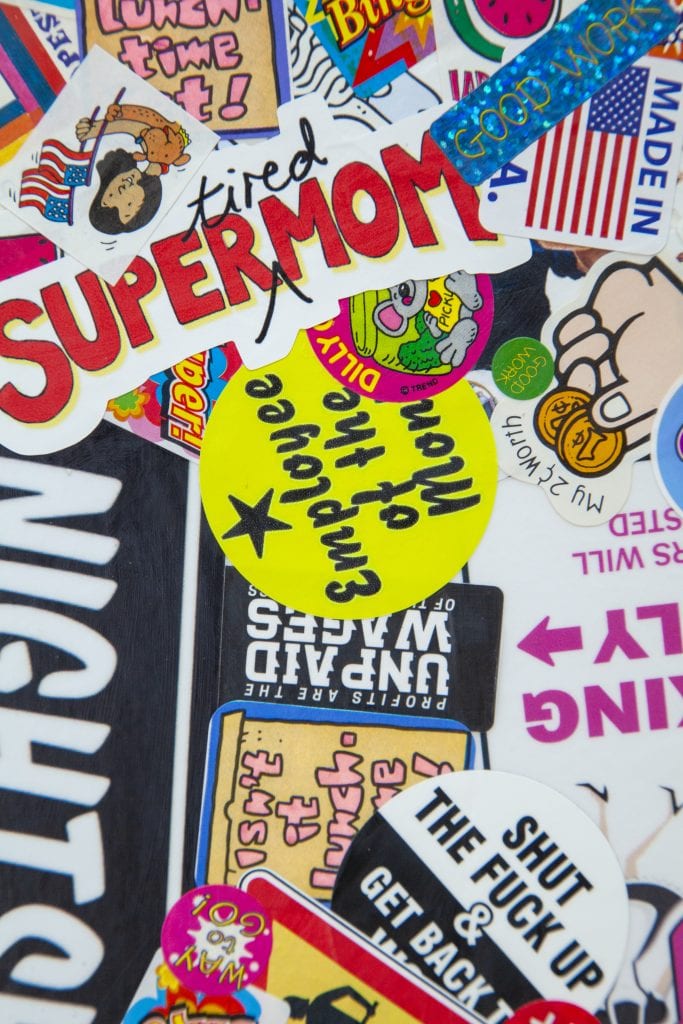 We have recently been captivated by your sticker paintings – can you talk about the message behind these, their process, etc.?

The sticker paintings began as a happy accident. I was in the midst of making paintings that utilized collage elements and, while watching a documentary on online dating one night, the idea to create a piece entirely composed stickers occurred to me; the most compelling ideas seem to strike me when I am away from the studio and often at random. Like a stand-up comedian, I’m always scribbling away to prevent stray ideas from disappearing into the past. The pieces themselves are multi-layered. They mirror my–and perhaps our–frenetic and anxious consciousness. I am bombarded daily, almost to the minute, with pings and dings and emojis and alerts and calls, making contemplative stillness feel like an impossible luxury. I suppose I needed to see what that looks like, the inside of my brain-–and perhaps our–brains. In the pieces that contain more text, I am toying with the fluid nature of language and the intersection of overtly political ideas. In But When You Say, the work currently on view at JDJ, I took the concept of invisible and domestic labor and actively disintegrate it into multiples. Domestic labor cannot be divorced from other forms of labor and those forms of labor are, by design, invisible and I wanted to articulate that. Right now, I’m moving forward with new pieces that take a singular and monolithic idea (e.g. violence) and pluralize it. 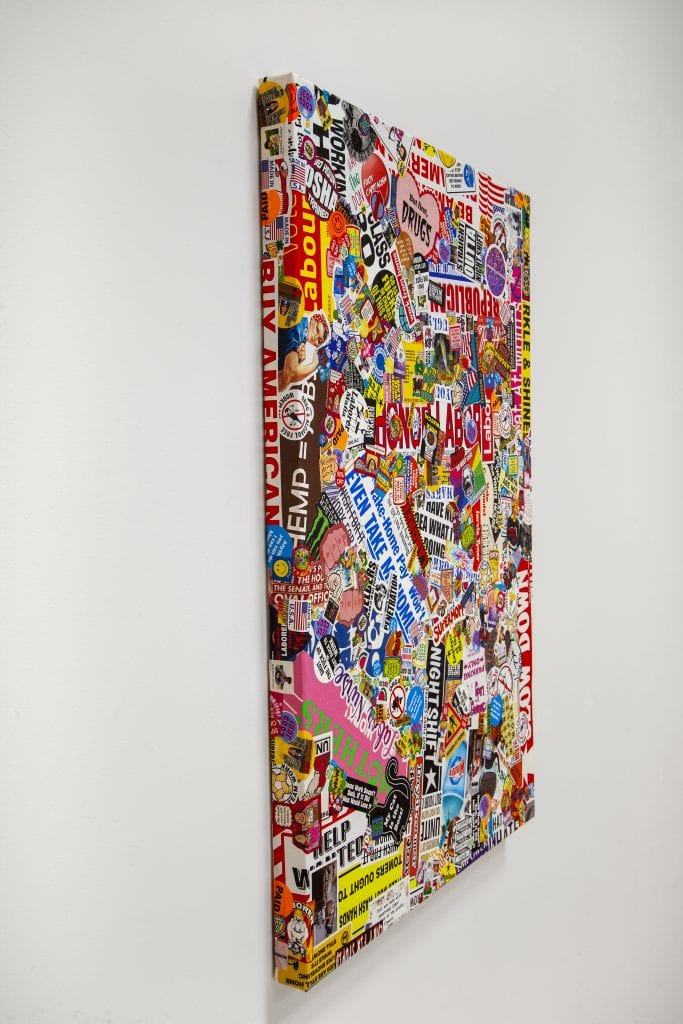 The New York-based artist Christopher Manzione reached out to me to write a script for a non-narrative virtual reality artwork and we are currently shooting that project, which is tentatively entitled a script for infinite space. Later this month, I am directing a performance of the plays by the artist Barbara Stauffacher Solomon at LAXART in conjunction with her exhibition there. The plays are delightfully absurdist and they have never been staged before and so it’s thrilling to be involved. And I’m in my studio making the sticker paintings, applying each one by hand.

Check out Art of Choice’s interview with Bridget Mullen here