Inspired by Futurist and Impressionist painters that came before her, Bridget Mullen creates works that blur the lines between figuration and abstraction. Upon close examination of one of Mullen’s sprawling canvases, multiple figures appear to be interacting in ways that tap into our human emotions. Through her work, Mullen explores different means of connection and its vital role in our lives. Mullen is based in Brooklyn, NY. 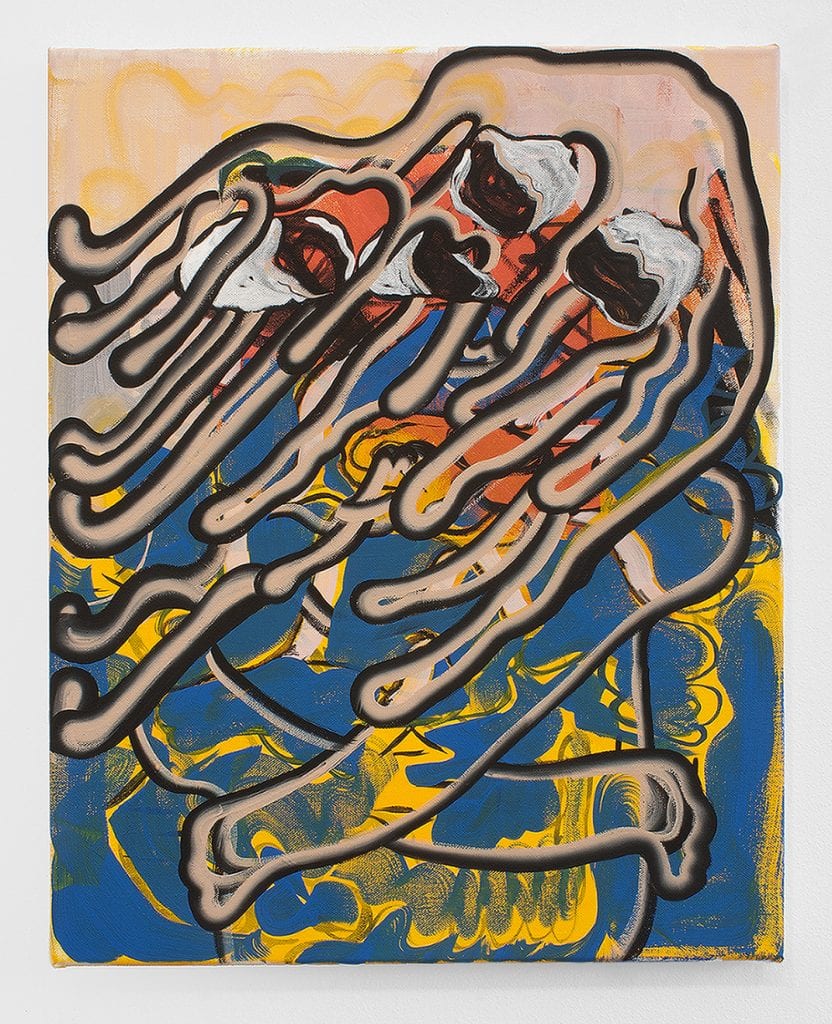 Community is the most important part of my art making. I’ve traveled a lot over the past 4 years doing residencies and have formed strong bonds with many different groups of makers. I’m lucky that so many of those people live in NYC. To be inspired by what someone makes and to know them intellectually/emotionally is such a joy. My community takes the time to visit each other’s studios and shows and to think, talk, and write very deeply about the work we are making. It’s true my community is mostly women, but also true that some of the artists I most admire and have the most in common with don’t identify as women. One of the things I love about being a painter is the anonymity, the separation of me from the objects I make. My paintings exist independent of me and are therefore non-gendered. 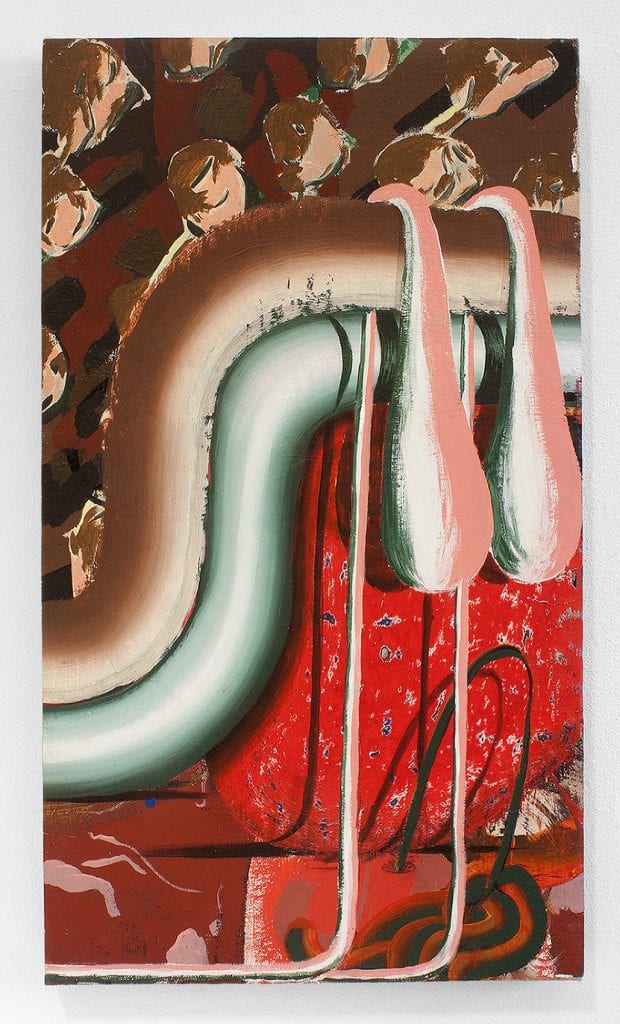 Yes, I’m sure I have but how would I know if the reason for my specific exclusion was my gender and not my work?

It’s no secret that most of the solo shows in museums are given to white men. Women have always been undervalued; female artists aren’t taken as seriously as male artists. This is also true of artists of color and is true of artists making art outside of the Western art context. 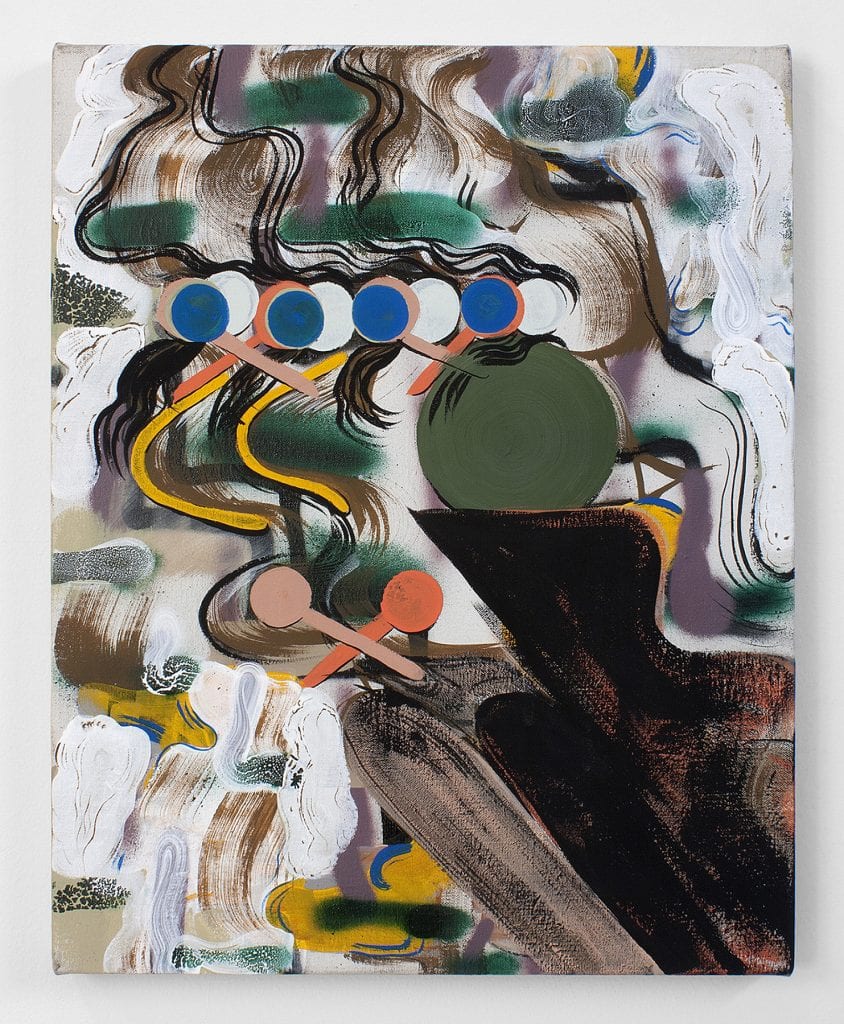 I’ve noticed that more galleries have all female shows and I’ve noticed a desire for greater transparency in gallery practices and representation. 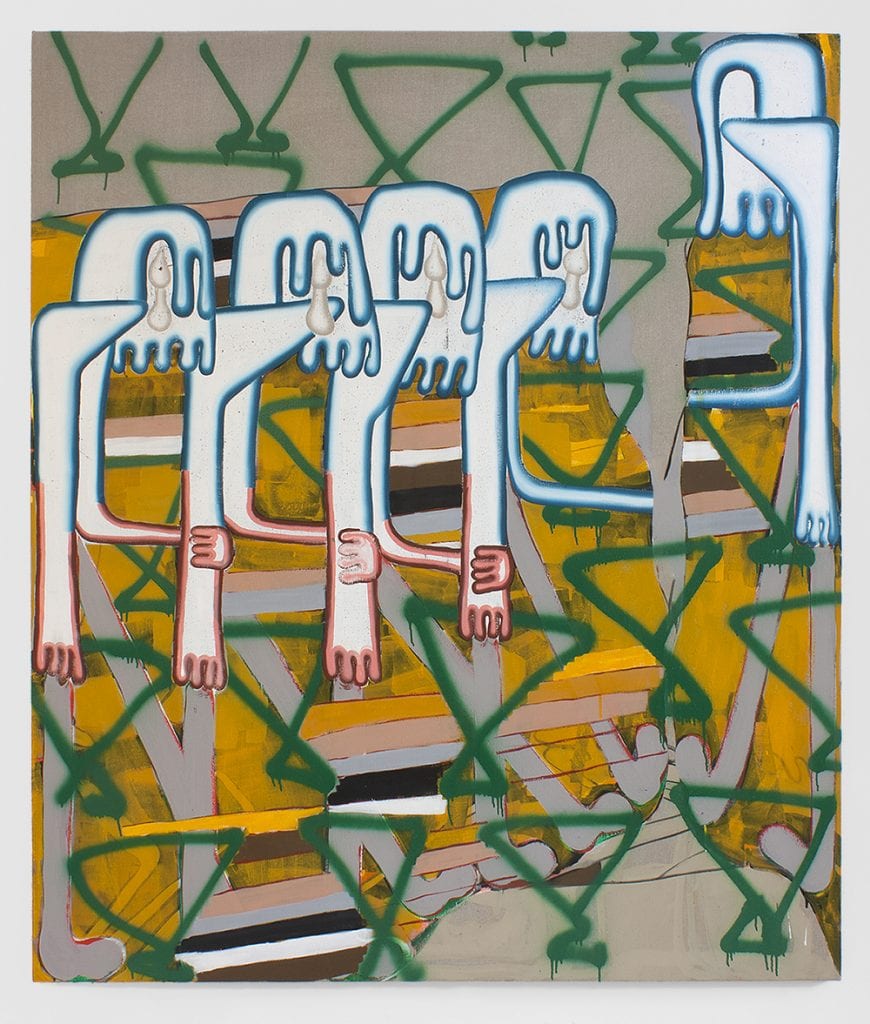 What movements in art history most inspire you?

I like certain Futurist paintings and certain Impressionist paintings, but I mostly like paintings made after 1970. Guston’s paintings from the late 70’s early 80’s are some of my favorite of all time. I love a bunch of the Chicago Imagists and really dig animations from the 1930’s. Bruegel, Hals, and early Northern European Renaissance paintings also really inspire me.

Repetition plays a role in your work. Why do you employ this repeated element?

Each painting uses repetition differently. Sometimes repeated elements are silkscreened before the linen is stretched and function in the background like wallpaper, seeming to extend beyond the frame infinitely. Sometimes a repeated element stops at the edges of the frame and becomes like an animation, one character moving through time. Repetition can also simply be a way to sketch out the full nuance of something in the sum of many. In an attempt to make a character more familiar to me, I end up reiterating its strangeness. I make my work without sketches, and start abstractly, responding to formal considerations rather than consciously deciding on an initial subject. Somewhere in this process I start to see how figurative elements could emerge. I like working in the dark so to speak, to not know what I’m doing, and to have to paint myself out of a corner I’ve painted myself into. Repetition orders and amplifies the chaos that built the painting. 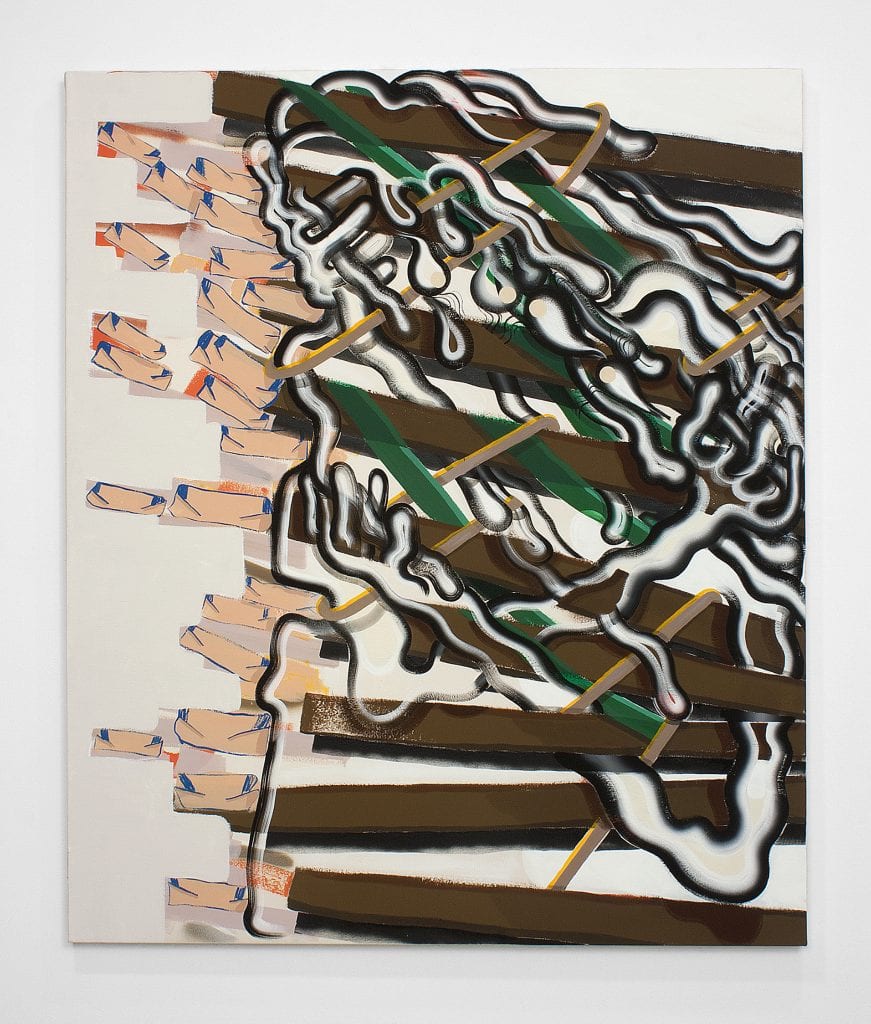 You often use a muted color palette in your work. Is this intentional?

I love this question. I wouldn’t use the word muted to describe my palette, though I suppose technically I’m tinting or shading a dominant hue. I prefer to think of my palette as relational and nostalgic. I first respond to the surface— be it linen, canvas, panel, paper, or an already worked on painting— with similar tones, like a building owner trying to match color to cover graffiti. This acknowledges my surface, which is never incidental (I could paint on bark, glass, grass, or silk, but I prefer linen.) Sometimes bold colors emerge as a way to obliterate past marks; blocks of bold blue, green, or yellow introduce necessary discordances, colors becoming like characters themselves. Often, I think of color as if it’s a material— like mirror, metal, water, or paint. My colors can be analogous, complimentary, independent, stow-away, embedded, faded, non-colored, or discordant.

When I was a kid, I watched a lot of Sesame Street. There was something in the way the colors of the felt-like fabric of the puppets was worn or faded that was endearing. The wearing away of a color that was once more vibrant felt nostalgic even then, and as if a transfer and absorption, not just of color but of sentiment, had taken place. How active color can be, how metaphysical! 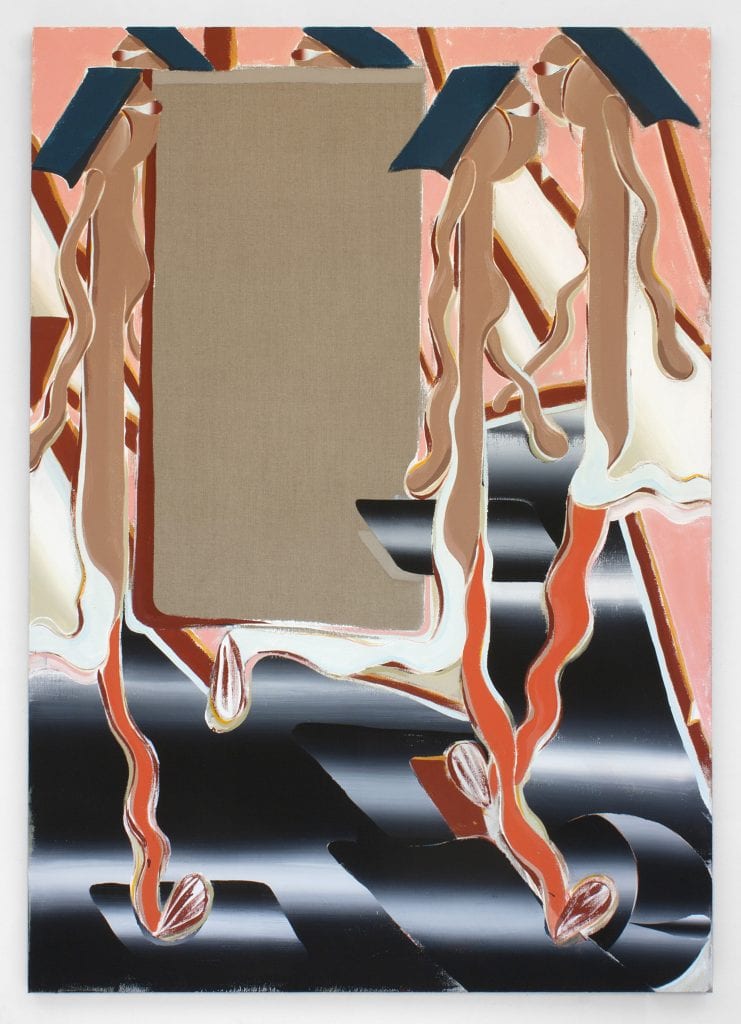 Can you tell us about your recent solo show, “Threshold Blues” at Helena Anrather Gallery?

The nine paintings in the show could have at first glance appeared entirely abstract, but on closer looking revealed complex plays of figuration. Most of the paintings engaged two or more figures or figurative elements: long hair cascading and entangling two bodies, toes (or are they paintbrushes or flowers?) touching lightly in a vibrating field, and two sets of eyes peering out from behind drooping flower or brush-like forms that weave from background to foreground in what could be a shattered window. How we connect and how we cannot is implicit in having a body with physical boundaries and psychological thresholds. Though the figures may be cryptic in delineation, the forms are reaching, searching, melting, and weaving. The forms are metaphoric of both the fluidly and the solidity of paint: an appropriate medium to convey longing and its limitations.

Helena Anrather was wonderful to work with. We collaborated really well together— in choosing work for the show, the installation, and the writing— the whole process was a delightful challenge. Her gallery’s programming continues to excite me.

Ahavani Mullen. She has a really unique and refreshing relationship to her work that is beautiful and inspiring to contemplate.