Canyon Castator Traverses the Fragility of the Modern Mind

Canyon Castator creates content-driven work. Viewing his large-scale, multi-faceted paintings, one gets the sense Castator is cracking open the inside of his brain for all to see. While some visual references are explicit and obvious commentary on current times, Castator includes source material that is varied and far-reaching, placing iconic cartoon characters alongside of political figures. Visually, he does not stick to one language, instead exploring a wide range of styles and creating a plane they all occupy together. Based in Los Angeles, Castator’s work is currently on view in a solo exhibition, Infidel, at Postmasters Gallery in NYC. 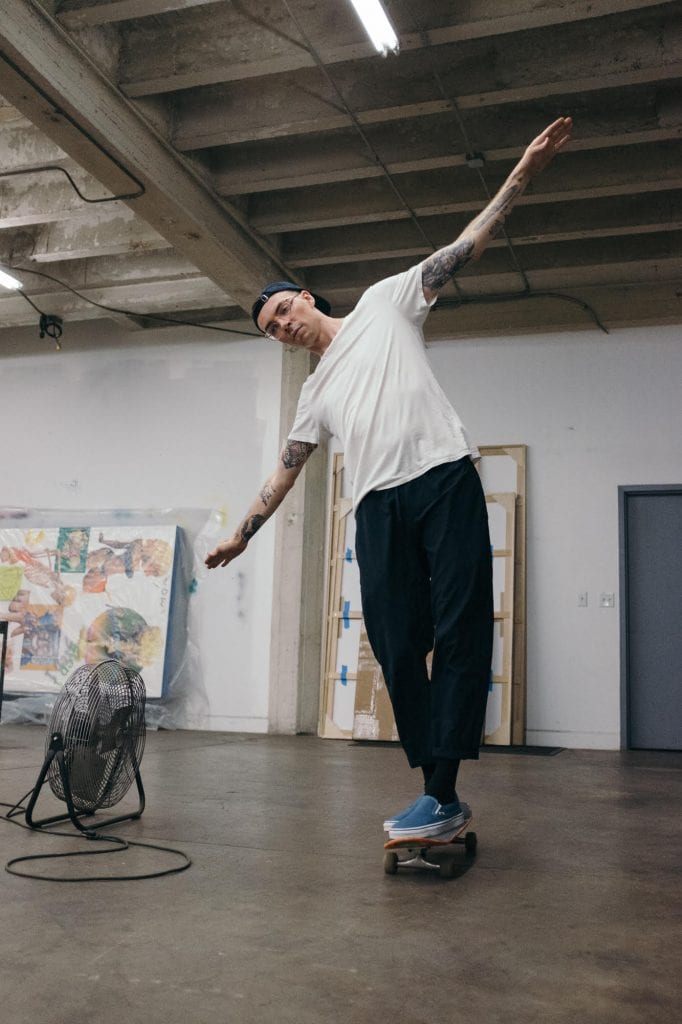 I was born in Houston, Texas. I lived in the sticks on the outskirts of Austin until I was about 10, when I moved to Colorado to live with my dad. I consider myself from Colorado. I’ve always drawn, and was encouraged to do so constantly by my parents, who are both artists. I’d get in trouble for drawing ‘’inappropriate’’ cartoons or unflattering portraits of faculty in school and my dad would come in and defend my “burgeoning practice”. I was really lucky to have that kind of unwavering support, but needless to say, between incessant drawing and ditching school to go skateboarding, I did horribly academically. When I got out of high school I didn’t have any kind of hope for college, so my Dad just suggested I “start painting seriously and move to New York’’ which is a crazy green light to get from a a parent, but I took his advice. 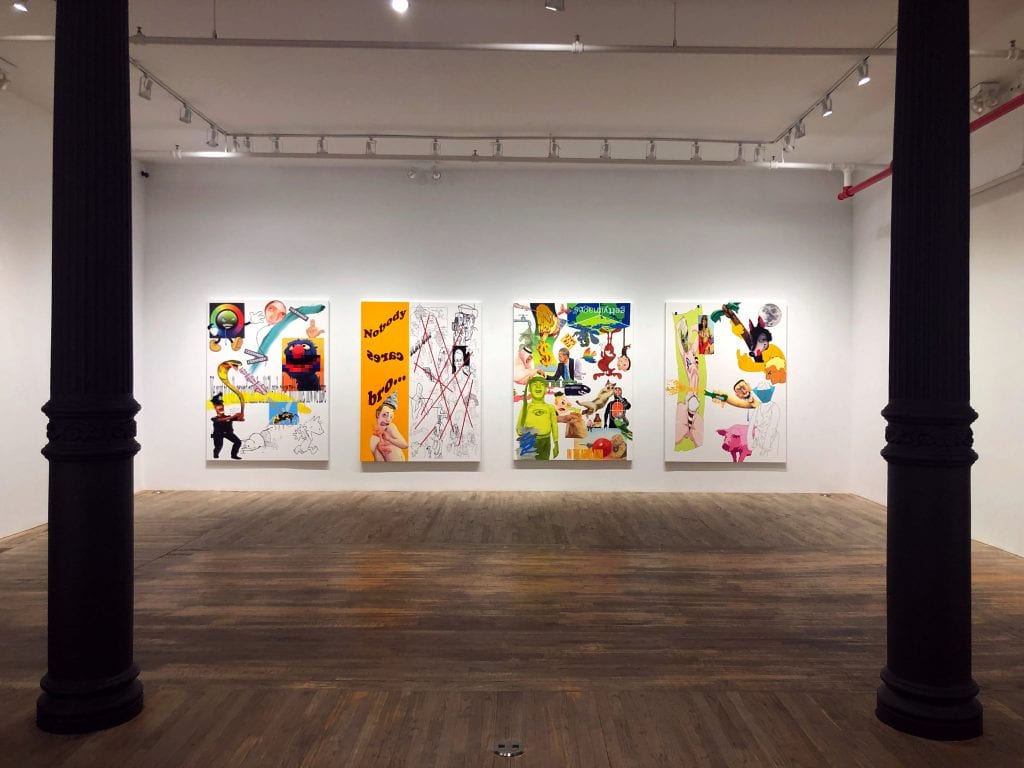 Infidel, installation view
Courtesy of Postmasters Gallery and the artist

I’ve always tried to move through different visual languages and never let anything stick to the plan. I’ve never understood how someone could consistently make work in just one overarching “style” without becoming unbearably bored. It seems limiting and redundant. I try to denounce “style” and replace it with content. To create a practice where I can paint however, or whatever I want. It’s taken me a long time to develop that practice, but by inviting in that constant change I’d like to think that it keeps the work engaged, searching, and hungry. 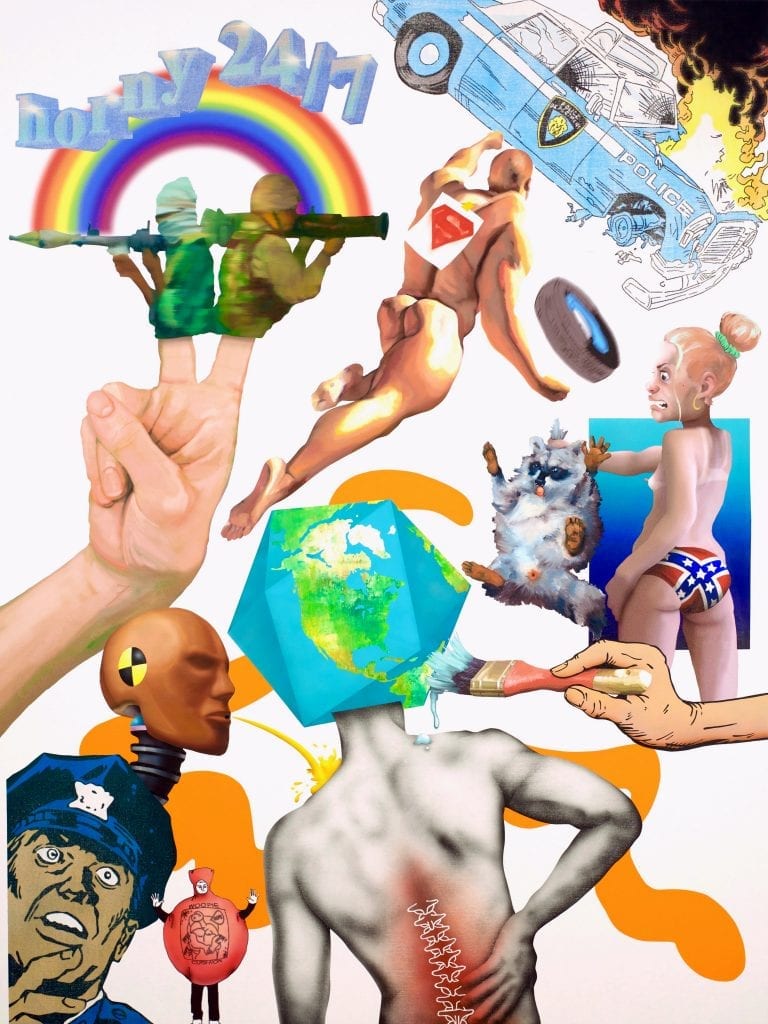 Self Portrait As The Problem And The Solution, 2019
Courtesy of Postmasters Gallery and the artist

Is there a unifying messaging surrounding your work?

Ha. Yes. Through all the cynical symbolism, knee jerk violence and goofy nudity there’s some kind of message. Maybe the message is that the worlds fucked, and has been fucked, but only through acknowledgement of said fucked-ness can we start to unfuck it. 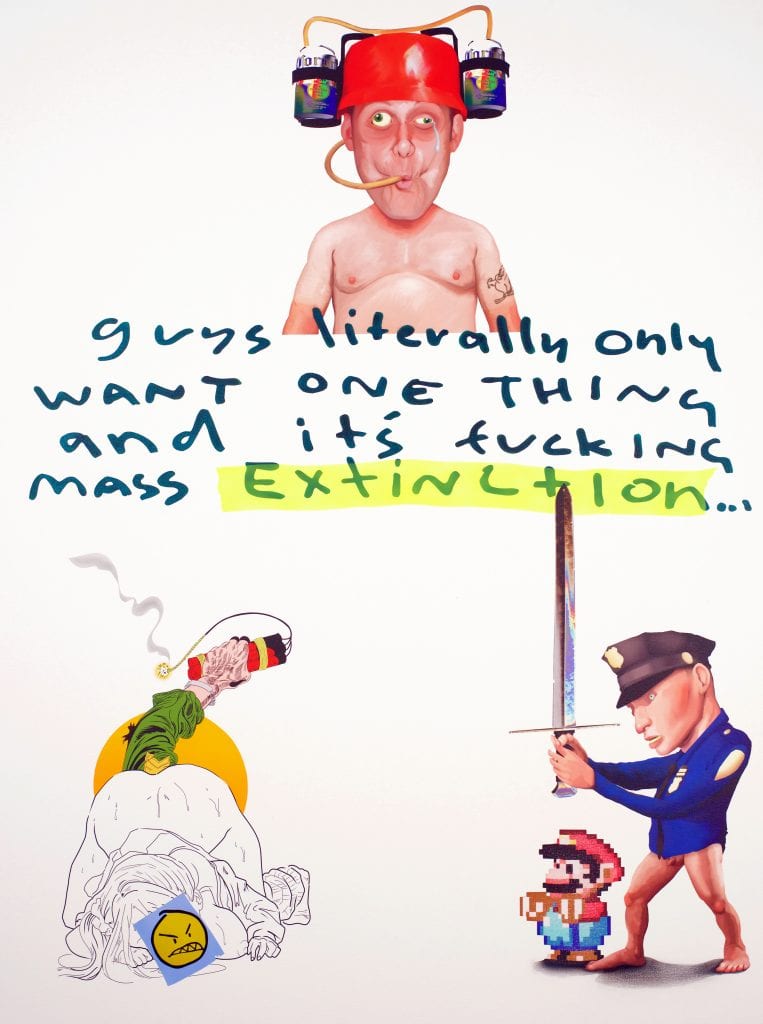 Guys Only Want One Thing, 2019
Courtesy of Postmasters Gallery and the artist

I keep pretty consistent hours in studio. I’m usually there from about 10 to 10. Not much happens for the first couple of hours typically, usually just pace around drinking coffee and killing time trying to figure out how I’m ever going to start working that day. I play ball with my dog or bother my downstairs studio neighbor (Austyn Wiener). It’s hard for me to get into the headspace to paint, but I show up, I put myself in front of whatever self created problem I have to solve and eventually I find a way in and start working. Once I’m in it I’m very systematic, and work through the days checklist, building up these micro motifs into a full painting; Paint green vomiting figures hair, Second pass with highlights on walking whoopie cushion, make Jesus look more menacing and so on. It’s all very silly and incredibly important at the same time. 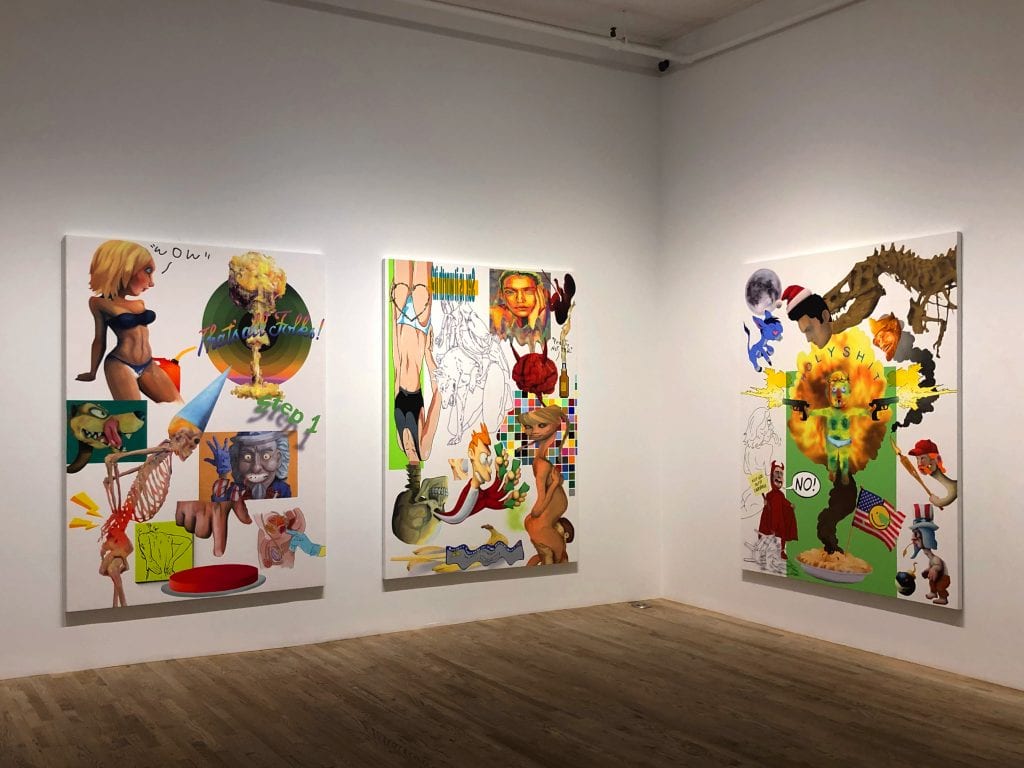 Infidel, installation view
Courtesy of Postmasters Gallery and the artist

What other artists working today most inspire you?

Can you talk to us about your current solo show, Infidel, on view at Postmasters Gallery in New York?

Infidel was a massive undertaking, the largest show I’ve done so far. I wanted to make paintings that took the temperature of our contemporary climate in real time, and deliver the diagnosis in a palatable, humorous way. There are a handful of themes that tie the work together, but most importantly they deal with the fragility of the mind in the age of connectivity. What people find when they go looking for validating “truth” on the internet. The conspiracies, the bad faith mob mentality, and all the other trash that can take hold of a disassociated, vulnerable mind looking for “answers”. 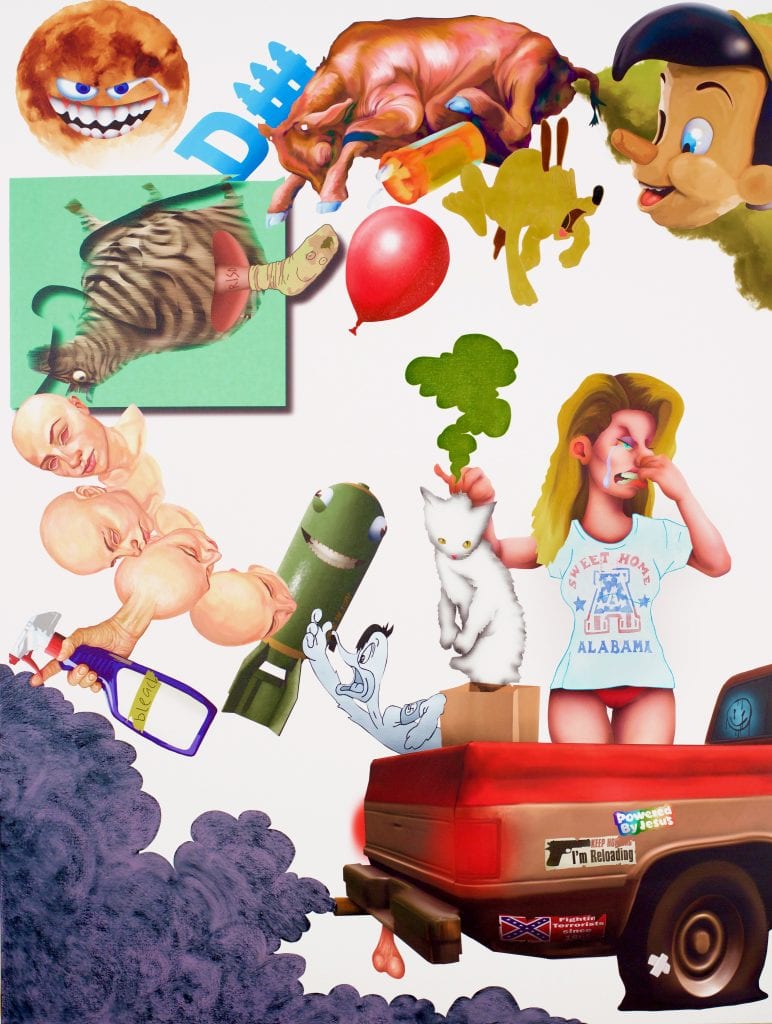 Can’t Put Cats Back Into Bags, 2019
Courtesy of Postmasters Gallery and the artist

Looks like a couple art fairs, curating this show in Beirut, figuring out this two person show in Greece, there’s a lot of stuff in up in the air. I’m really interested in doing a cartoon series, trying to make time to figure that out.


A poem written by Castator in conjunction with his exhibition Infidel

Mario Ayala, he’s an unbelievable artist and technician who is about to open a solo show at Marlborough Chelsea that I’m really looking forward to seeing in person.