Robin F. Williams Takes a Layered Approach in her Exploration of Gender & Power

Robin F. Williams paints lively, mostly female figures that toe the line between fantasy and reality. Through her figures and their various contexts, Williams is exploring issues of gender in an American context as it relates to power. Her works are made from a multi-step process, resulting in fascinating, detailed-ridden works that capture your attention and intrigue. Williams is represented by PPOW Gallery in New York and Various Small Fires (VSF) in LA. She lives and works in Brooklyn, NY. 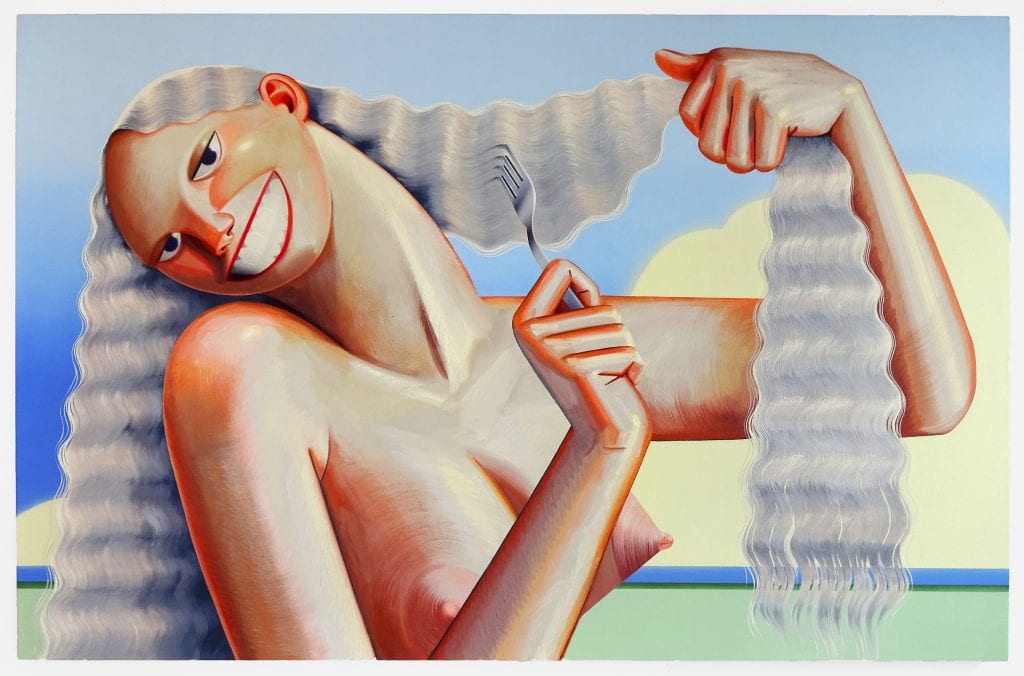 What themes does your work explore?

I’m most concerned with creating power dynamics between the painting and the viewer. I work to give every figure a kind of sentience or self-awareness. To be more specific, the paintings explore gender in an American context as it relates to power. I work to balance narrative with formal concerns in order to simulate these dynamics. I’m always trying to keep myself curious and engaged with paint as well. This results in a lot of play and some humor in my practice. 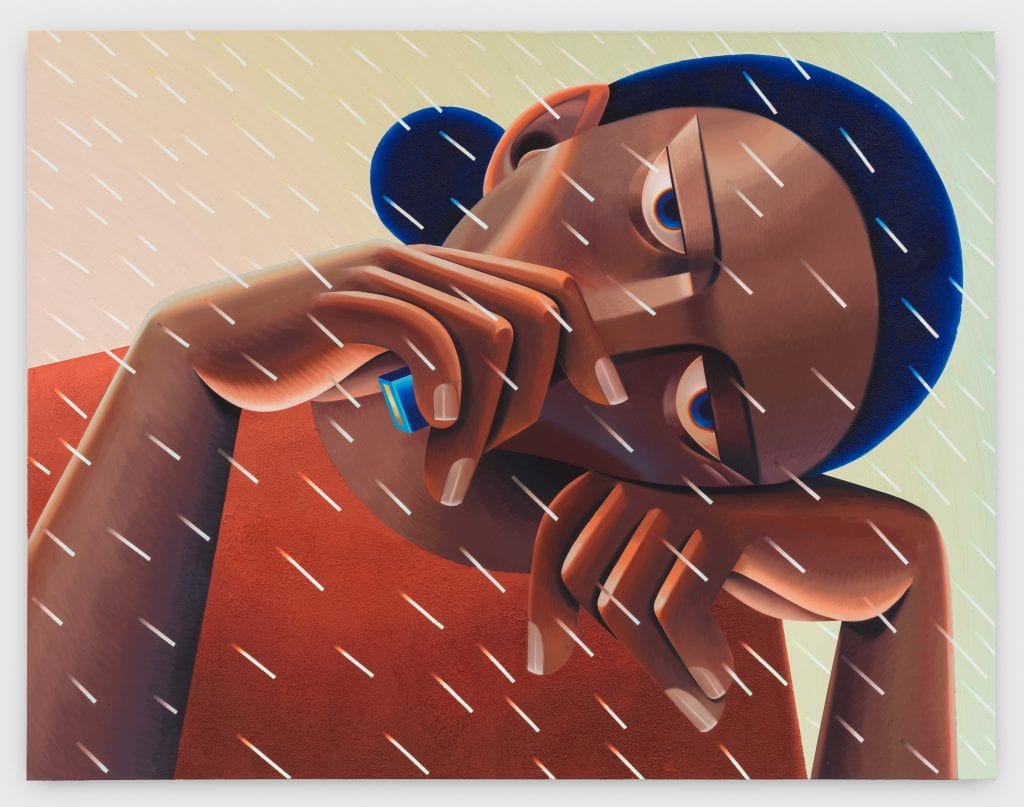 Has your work always involved figures? How did you arrive at the style of figuration with which you paint?

I studied illustration, and so my roots are in representation and figuration. For most of my practice, I’ve worked exclusively in oil and employed varying degrees of realism. In the last several years I’ve been using multiple techniques and mediums, and the look of my work has evolved through my working methods. As I’ve started to use an airbrush for instance, the way I “draw” or “build” form has responded to my masking process. It has simplified the forms and facial expressions of the figures. They have a more computer generated or graphic look. The different techniques I use are meant to evoke effects that seem photographic or digital without looking like Photorealism. I mix those treatments with more painterly passages and the result is a kind of mash up of different eras and visual signifiers. 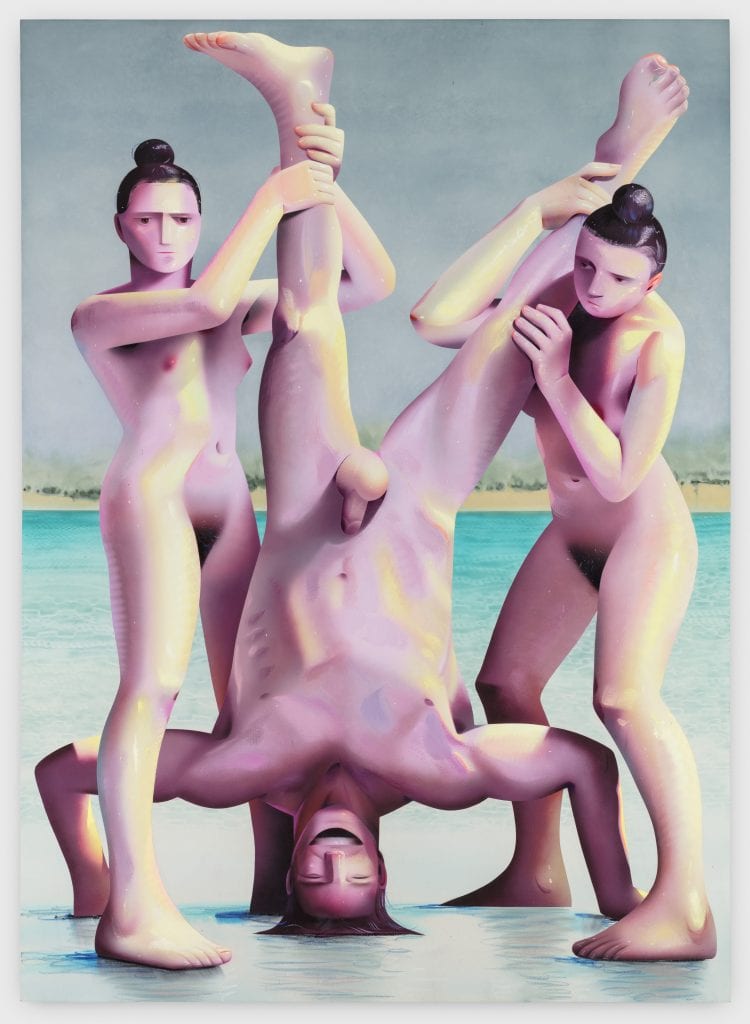 Do the figures and scenes that you paint come from source imagery?

Most often they do come from a source, but a lot of my imagery is imagined as well. I’m referencing mostly vintage print ads, film stills, and popular poster art as well as notable paintings from art history. I’m interested in print because it’s a disappearing form of media. While it was most popular, there was a real absence of figuration in painting. As we are losing physical representations of people in print, figurative painting is coming back. We are also encountering mostly virtual (ephemeral) images of people on our phones, and female operating systems that have no visual form (like Siri and Alexa). Painting seems like a fertile place to understand our new relationship to our bodies. 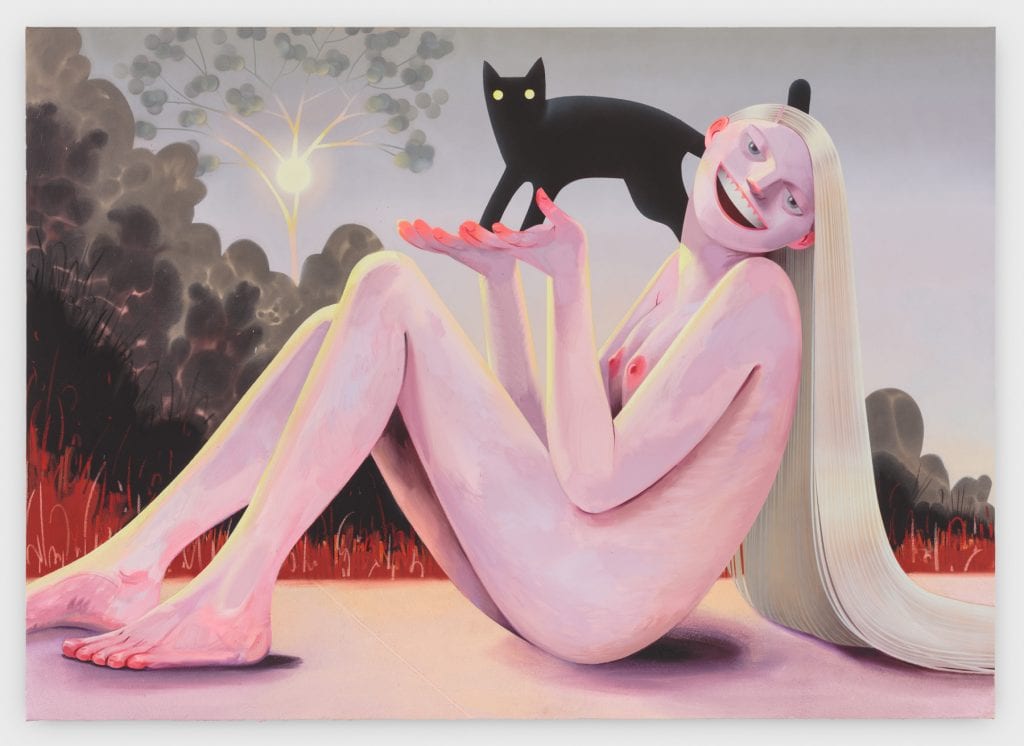 What movements in art history does your work reference?

I’m looking for painting references (and any other source for that matter) that operate as a time stamp. I’m drawn to art, design, or advertising that defines its time. Otherwise, I’m looking for iconic aspects of paintings. If I’m wondering how to paint clouds for example, I may look at Turner. If I need a sunny park scene I may look at Alex Katz, or Georges Seurat or Fairfield Porter. If I need moonlight I’ll look at Rockwell Kent. If I need candlelight I’ll look at Georges de La Tour. I’ve borrowed from Vermeer, Courbet, Hopper, Goya, and Manet. Artists who I both love and hate, like Picasso and Balthus, also factor into the work. I’ll take whatever I need from anyone. Then I try to extrude that influence through a technique antithetical to its time. I’ll paint Turner’s clouds by staining the canvas like Helen Frankenthaler, or I’ll paint the light from a sparkler (Georges de la Tour’s candlelight) with graphic airbrush. I’m interested in specific movements but mostly in order to compress time through employing a variety of painting ideologies at once. However, I most often gravitate toward early modernism, Manet being my biggest influence. This was the first time women were portrayed as existing within a specific time and political moment as opposed as their earlier depictions as mythical creatures or allegorical cyphers. 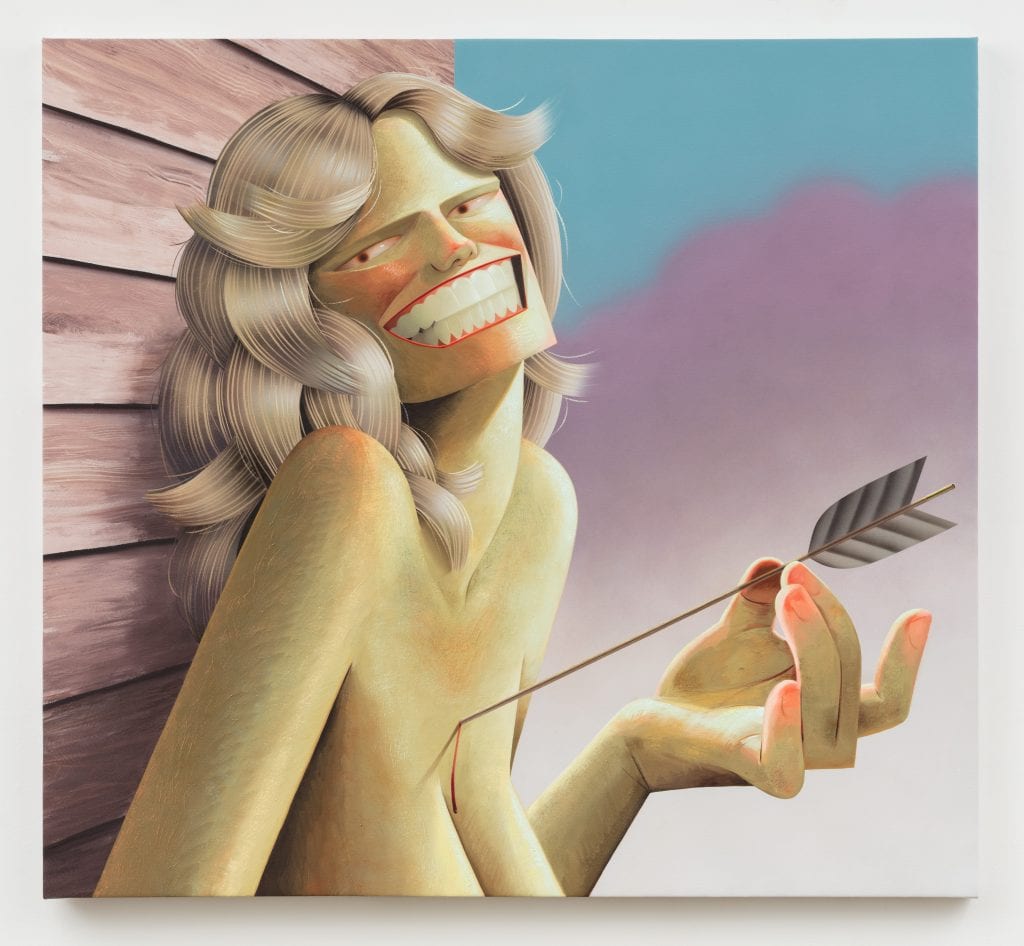 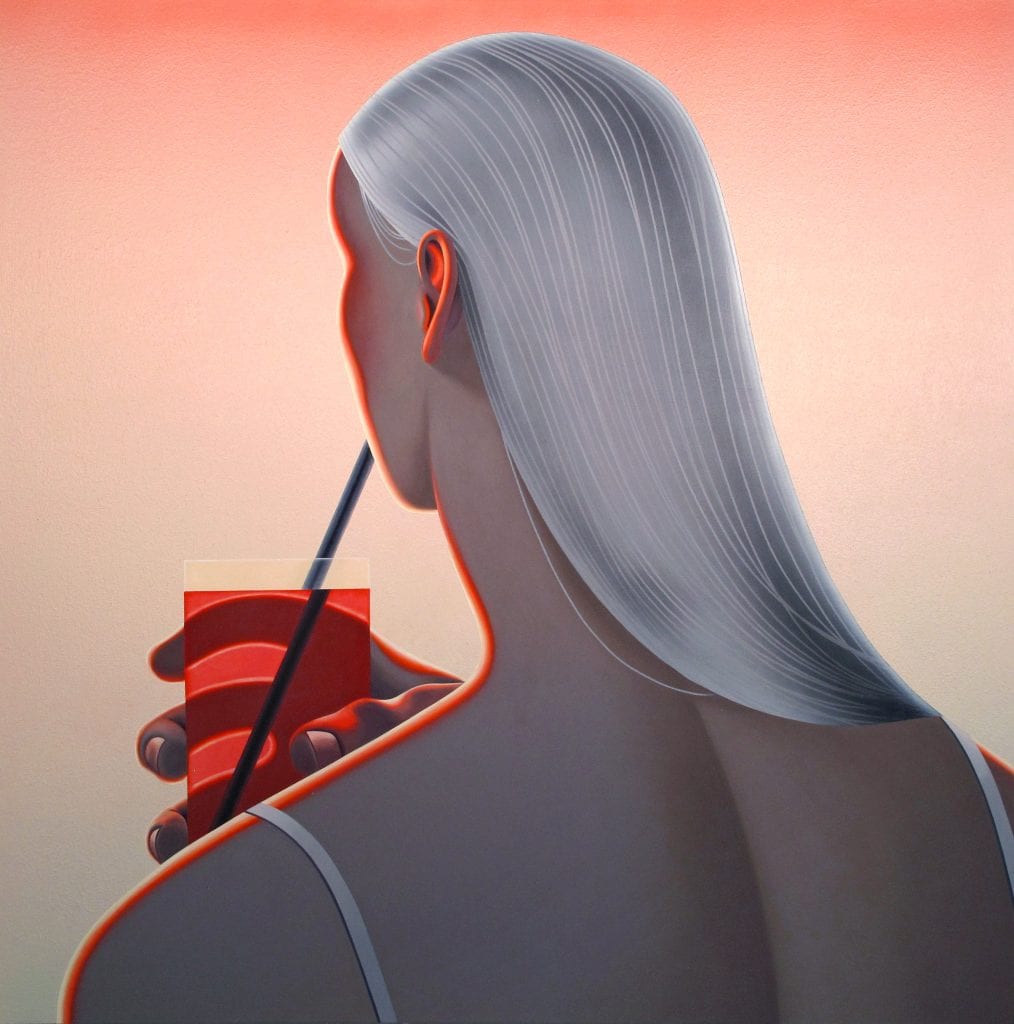 What other artists most inspire your work?

Because I just rattled off a lot of dudes, I’ll name some of my female influences. Lisa Yuskavage, Joan Semmel, Silvia Sleigh, Agnes Martin, Bridget Riley, Carolee Schneemann, Dana Schutz, Kathe Kolwitz, Adrian Piper, Yoko Ono, Inka Essenhigh, and Trina Schart Hyman who was my favorite children’s book illustrator as a kid. She inspired me to study art in the first place. Lisa Yuskavage and Inka Essenhigh were some of the few contemporary figurative painters working while I was still a student (and Inka is from my hometown). Agnes Martin and Bridget Riley are artists with so much conviction whose ideologies are both intellectual and sensual. Adrian Piper, Yoko Ono and Carolee Schneemann are just so incredibly brave in their work. All of these artists showed me how to center my experience without apology. 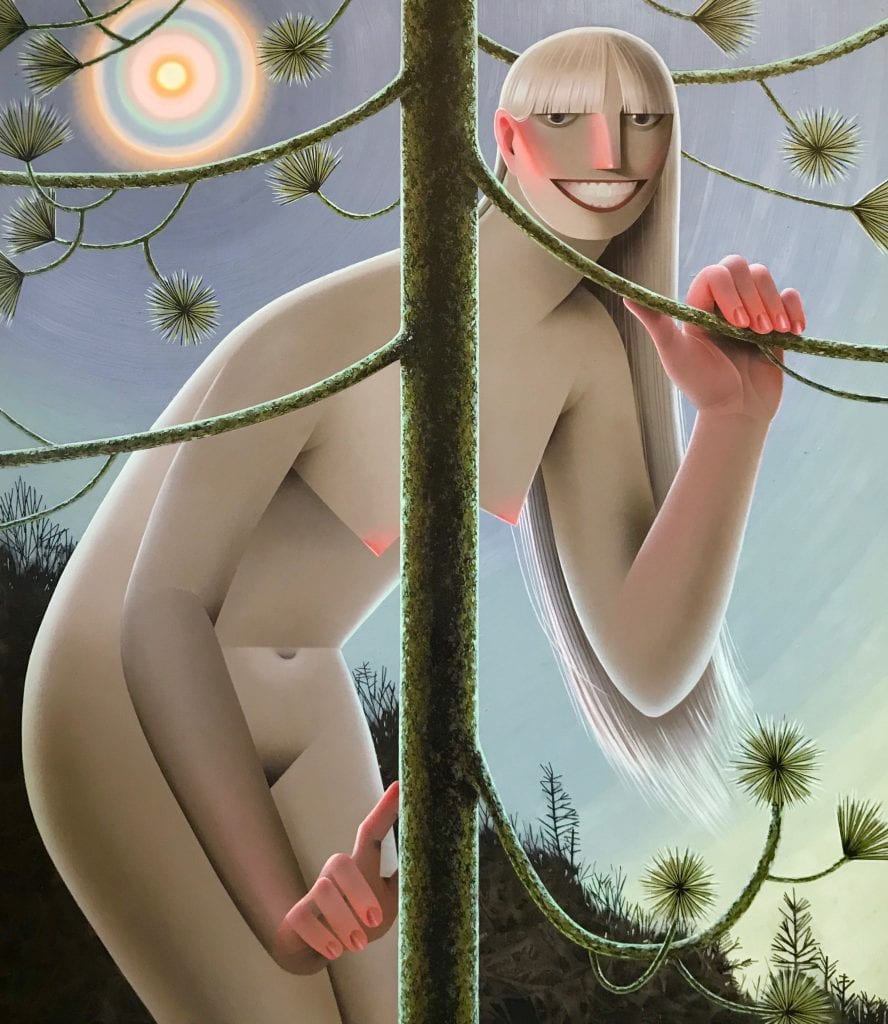 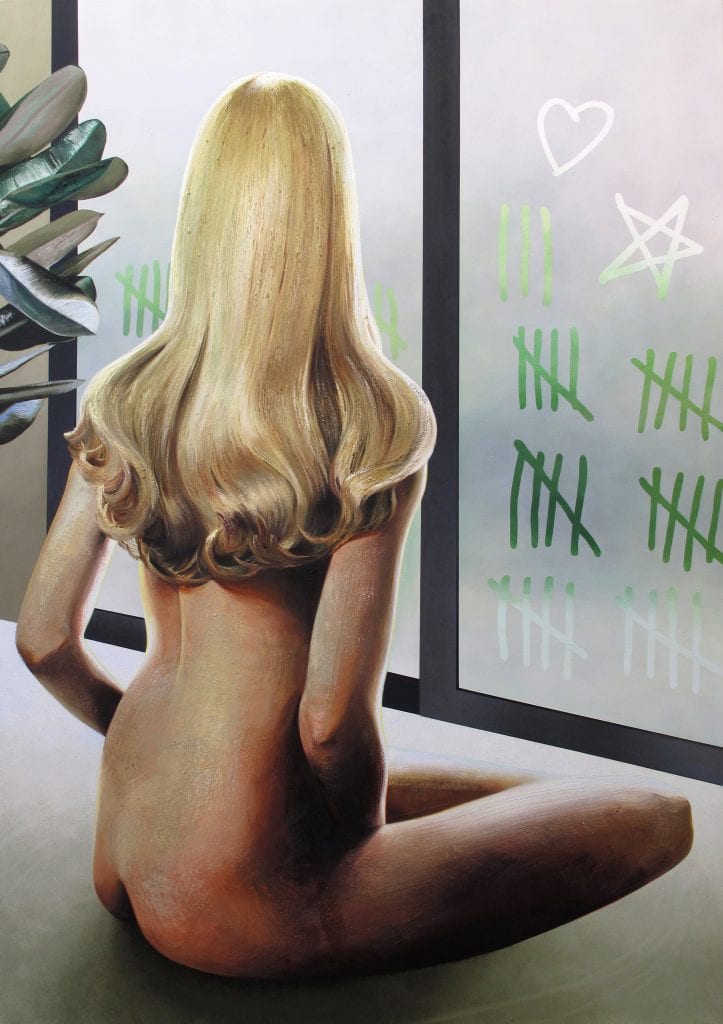 Nude Waiting It Out, 2016
Courtesy of Robin F. Williams and P•P•O•W, New York

You incorporate specific elements that hint at your figures being non-human such as their skin tone, but at the same time, create beings who feel familiar in a sense. Is this dichotomy important to you?

Yes, I think we understand ourselves more and more as virtual or constructed beings. We live a lot of our lives on the Internet and through screens. Paintings are a virtual space while also being distinct objects, and the environments and bodies in my paintings are certainly constructed. I like the challenge of creating a person out of paint that is clearly a simulacrum, but that feels none-the-less sentient or alive; an image that sees and knows it’s being seen. The advertising images that we engage with are more or less collecting our information. The image knows us and is looking back. 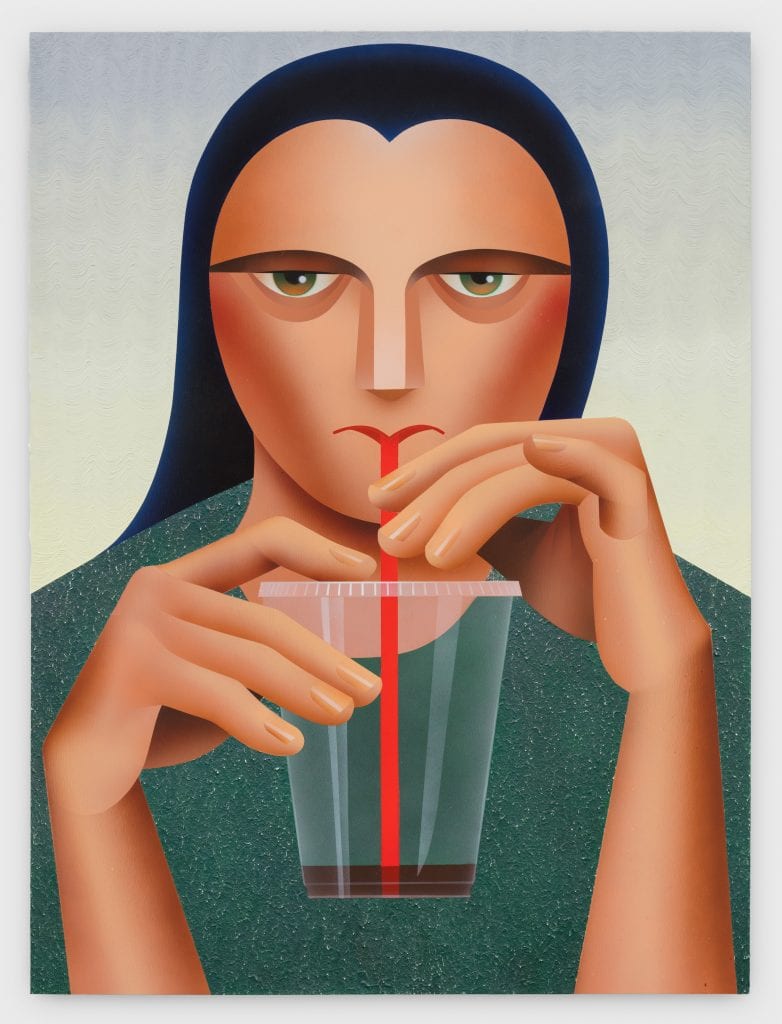 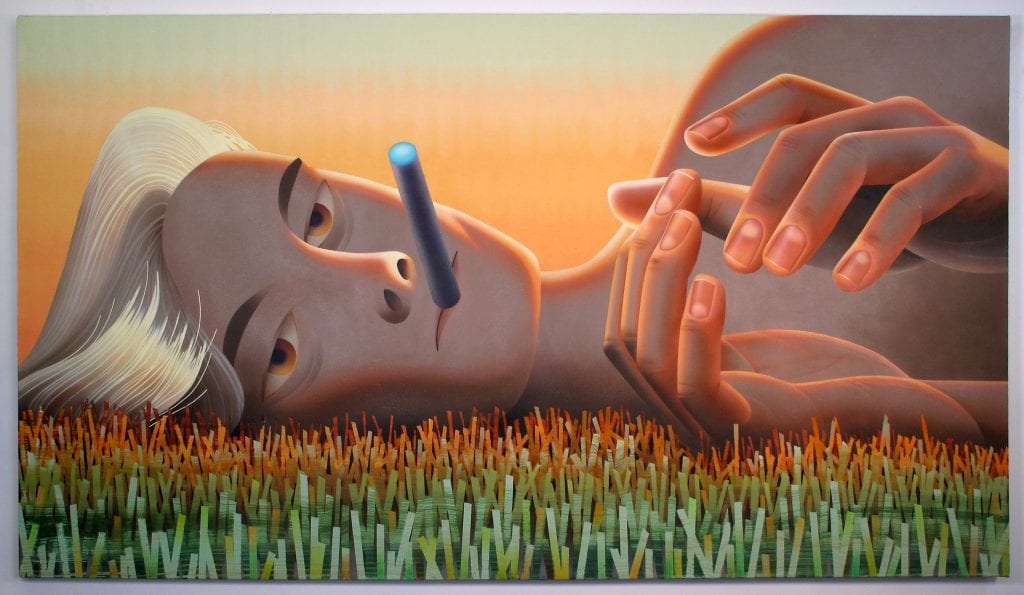 Your work takes on a multi-step, mixed-medium process. Does this mode of creating leave any room for surprise within the canvas?

Yes, thankfully, all the time. I’m always making mistakes that lead to new techniques. I also try to leave room for a certain amount of improvisation or high-stakes maneuvering. For example, certain brushstrokes that are highly gestural can only be done once, because to undo them would ruin a previous maneuver. Or a technique like staining raw canvas allows for paint to bleed and migrate on its own accord. The whole painting process feels a bit like moving through a series of rooms in which the doors lock behind you. You can hang out in a room for a while making a mess and playing around, but once you leave, you can’t go back. You have to be content with the work you made in that space. Weird surprises do happen all the time. I have to either accept them or scrap the painting and start over, but that’s rare. I think it’s more interesting to live with the result.

You will be having your first solo show at VSF in September. What can we expect from the body of work that will be on view?

The show will feature paintings of mostly women and a few men. The women are either in time sensitive situations or unsustainable poses, expected to wait forever. They are looking out, asking the viewer to justify this mandate. In theory, these figures implicate the viewer. Anyone who looks is cast as an enforcer of this permanent holding pattern. 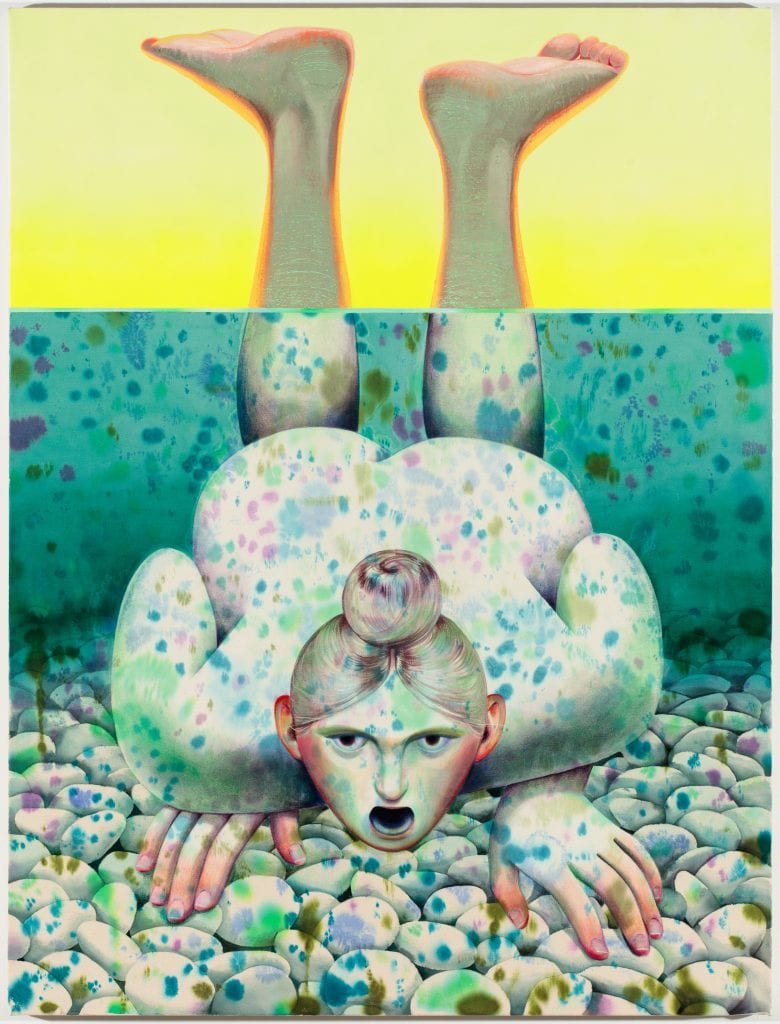 Do I have to choose just one?!