Til Will Pushes Against His Limits

Til Will is not interested in repeatedly creating work with a similar visual language. Will fosters a practice as versatile as the artists who inspire it. He remains as much in dialogue with painting masters from hundreds of years ago as he does with contemporary art movements. Not one to rush his process, Will embraces many methods of preliminary work before actually approaching his canvas. Will lives and works in Brooklyn, NY. 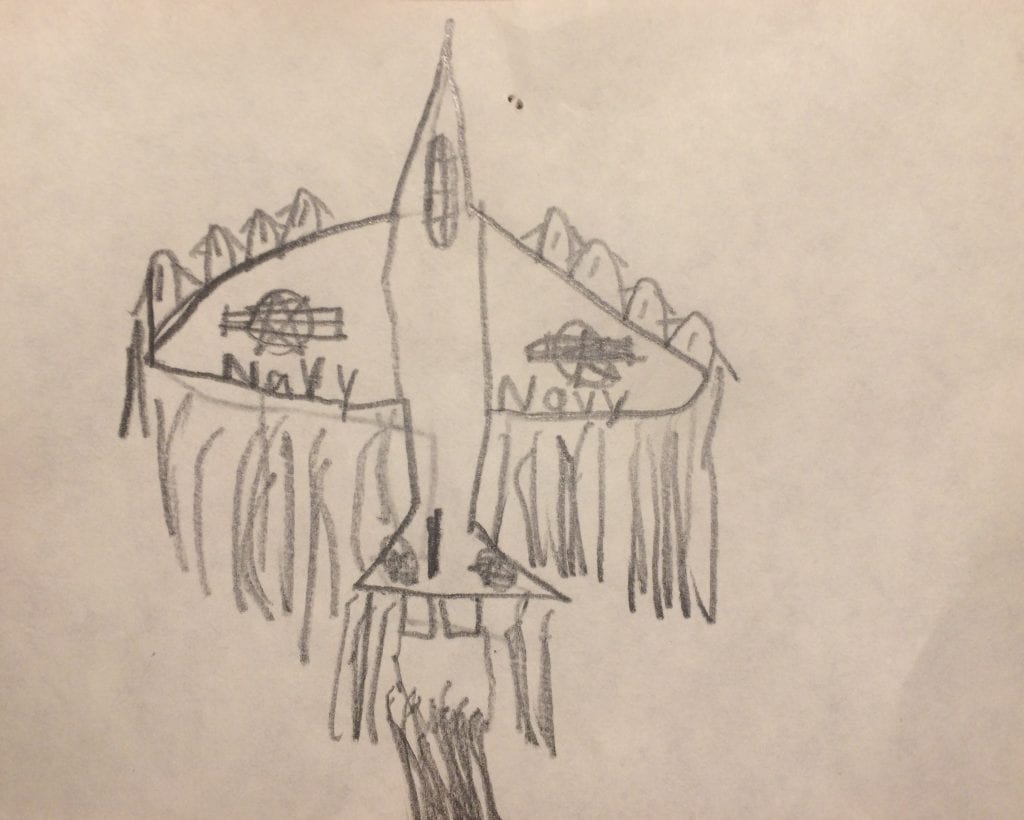 Tell us a little bit about yourself. Where are you from and when did art become a major part of your life?

My first drawings I can remember were air battle scenes. They had really crude and demented looking fighter planes shooting at each other, bullets signified by little dotted lines, and explosions that were just straight up scribbling. That sort of snowballed into more drawing, which was a good way to pass the time on the long car ride between Spokane (where I grew up) and Seattle (where most of my extended family lived). We did that trip probably five times a year. So to put a date on it, I must have started my art practice in approximately 1998 at the age of 6. Painting began for me at about age 11. My friend convinced me to sign up for an old ladies art class that operated in the back of the art store in Spokane. We painted majestic scenes of blue herons and other birds. 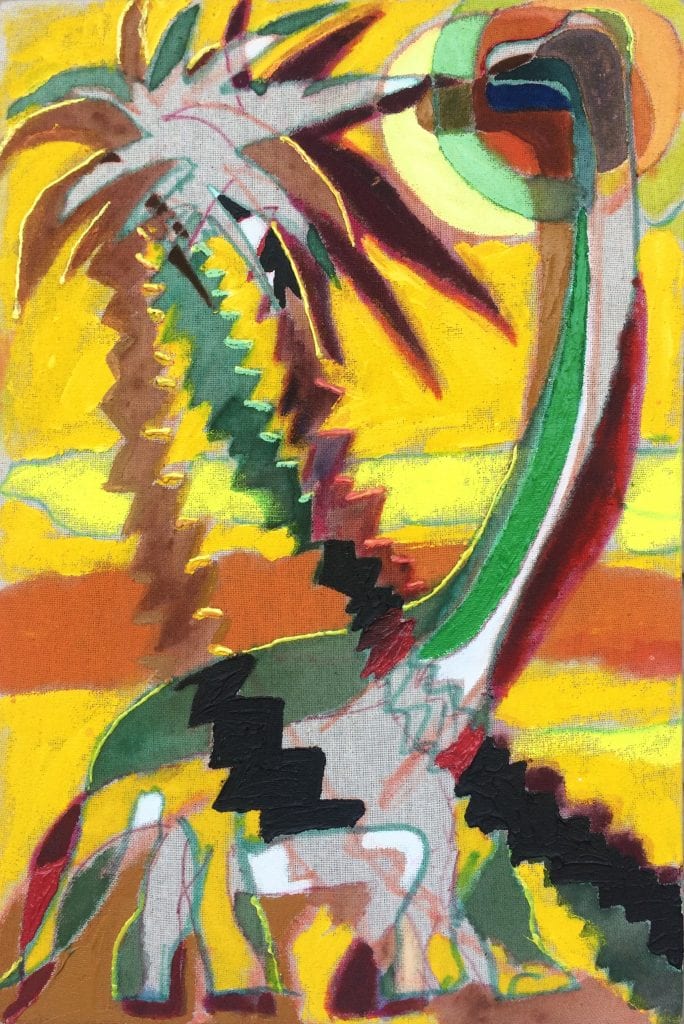 What are you most interested in in your practice?

Conceptually, I like cubism as a jumping-off point. I think I am the most fascinated with it because I’ve tried to make cubist paintings and failed—it is kind of impossible for me. Last fall when I was in Spain I spent a lot of time in museums, studied Picabias, Gleizes, Picassos, Delaunays, and a whole swath of European artists from that same time period. What they were doing is really difficult to accomplish. For me, the idea of cubism is to describe an object or situation in multiple instances, or glances, at once. Sometimes, I like applying this concept to the brush, so I will actually make multiple marks simultaneously of the same design. This provides a blurred rendering of the object, as if the color layers were separated and offset. I remember installing an exhibition of 1940’s/50’s movie posters that were very large Offset Lithographs. The alignment of the color layers was slightly off in all of them. It’s similar to that in an exploded view. I have done a handful of paintings where I add multiple versions on one canvas, to split the canvas per se, into the multiple options that the painting could become. I wanted to make a painting about sketching, which references two practice paintings, one by Velazquez and one by Picasso. Each of these have the palette mixed directly on to the side of the painting, which only renders the faces of the subjects in white space.

More recently I have been interested in pushing myself towards multiple modes of painting—assuming the role of multiple painters by varying the way I work from one canvas to the next. In the spring I copied George Bush’s naked bathroom paintings. Right now I am trying to reproduce Albers and Monet to somehow collage the two together. I like the idea of using pre-existing artworks as a medium, so I’m hoping they have almost the exact surface quality of the originals, so that took a lot of studying. 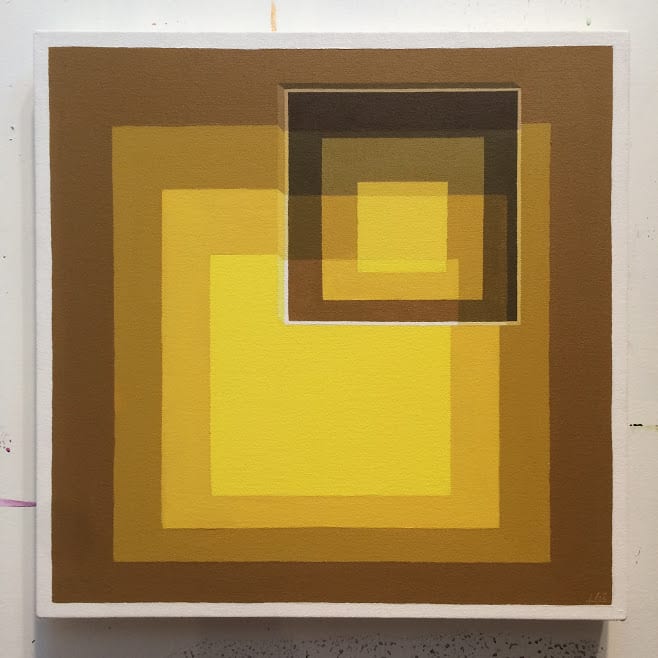 What other artists most influence your practice?

Artists I don’t know personally but am also influenced by: 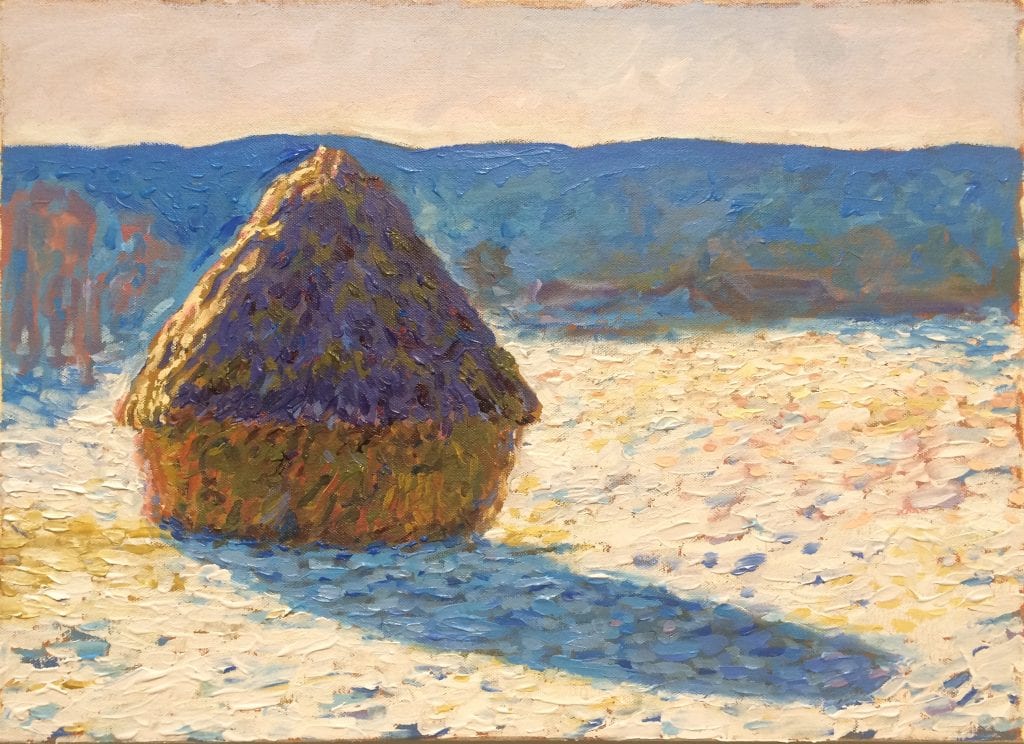 You’ve worn many hats in the art world, including curating and art handling. How do the different skillsets you’ve developed contribute to one another?

Yes, I have had a swath of art related jobs (or gigs). Self-funded curatorial efforts: In 2015-2016 I had a gallery in my living room in Bellingham, Washington called Open House that developed into a handful of pop up shows in Brooklyn that I ran collaboratively with Debbi Kenote. We did Spring Break Art Show in 2017 and 2018.

I think curating pairs naturally with painting because it’s all about what you are interested in looking at in a given moment. I don’t think curating is that much different from painting because it is actually part of my painting practice to seek out imagery and categorize it for myself; to curate is to publicize that selection. I also think curating is incredibly important and difficult and there really aren’t enough good curators right now. Curators have the power to tell people what to like; they have the ultimate power to shape the tastes of the masses.

I currently work part time for a gallery in Chelsea where I do a wide range of tasks, from installing art in high rise apartments to taking out the trash. There’s a lot of driving trucks in and out of Manhattan. I’ve recently been part of one curatorial project with them. As my own business I’ve also done quite a bit of specialized woodworking, including some large stretcher bars for paintings that are currently hanging in a lobby. Last year I designed and built a bar and shelving for a cafe in Brooklyn. But quite honestly most of the work that I do for others funnels into my immensely expensive studio practice, so to answer your question, I guess I couldn’t have one without the other, unless I lived in the middle of nowhere. 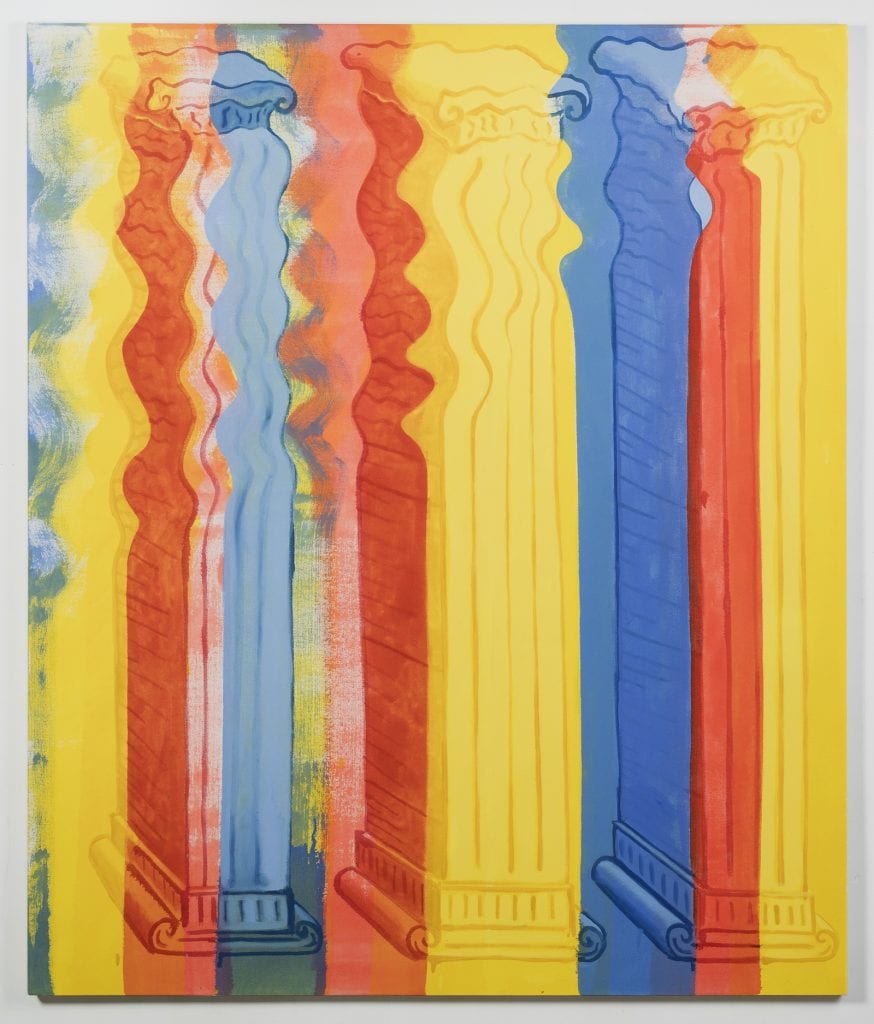 Working for galleries is a double-edged sword. On the one hand it has given me a good understanding of how art can participate in capitalism; on the other, it has shown me just how capitalism can negatively affect what and how artists make. Overall though it has been a good lesson of what to do and what not to do when dealing with galleries as an artist. I have witnessed artist/gallerist relationships from a fly on the wall point of view; the way the artist is spoken to is different from the way they are spoken about when they aren’t around. My understanding of the inner-workings of a gallery is actually empowering, because it identifies areas of improvement that are attainable. I think it’s also important to add that in my experience most of the gallery workforce has been made up of artists, which is a reminder that we literally run the shit, and therefore we have the power to change it. 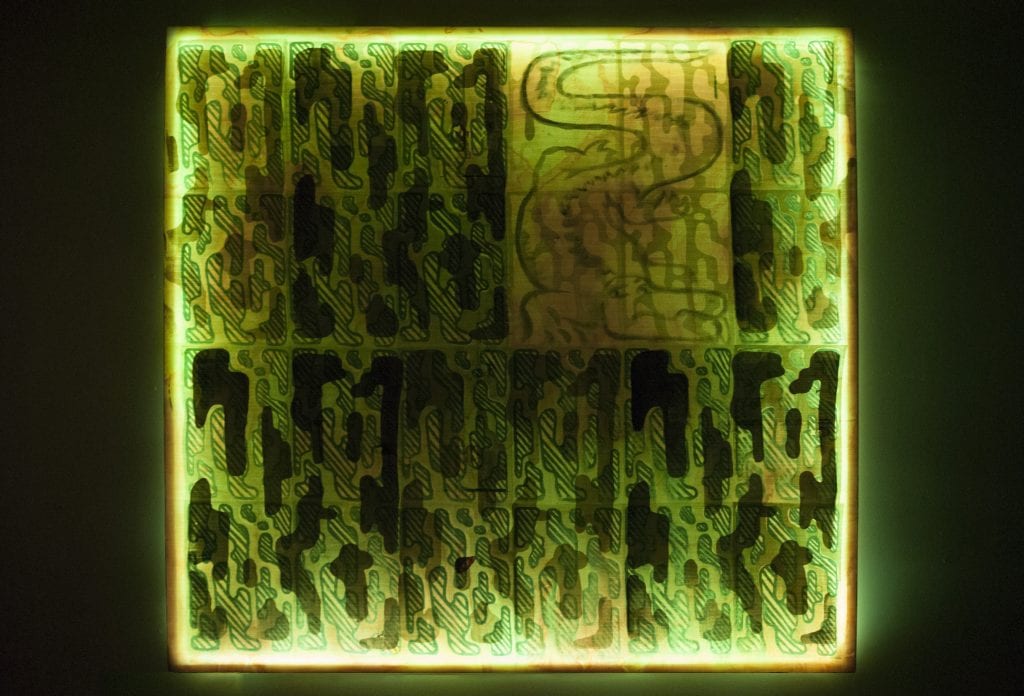 Your work takes on a variety of aesthetic languages, some work being figurative and representational and some abstract. Is this a conscious decision or something that naturally happens?

I suppose this might be a reaction to the artist-as-series-maker model that we are currently facing in the contemporary art world. Most painters limit themselves to a genre or give themselves rules to follow in a way that makes their expression quite specific and easily recognized. I don’t think this approach is wrong, because it often leads to the best developments of new style. Although for me, I am not interested in limits. I think the more opposite an idea feels from the last, the better. So yes, this is a very conscious decision. I think some of my favorite artists seem like multiple artists in one—you can’t tell that two of their works side by side were made by the same person. That is an unexpected yet logical next step for painting. To me this sort of split-personality art practice is maybe the most interesting interpretation of our modernity—the human ability to role play on the web is perhaps becoming the way that we are in physical reality. 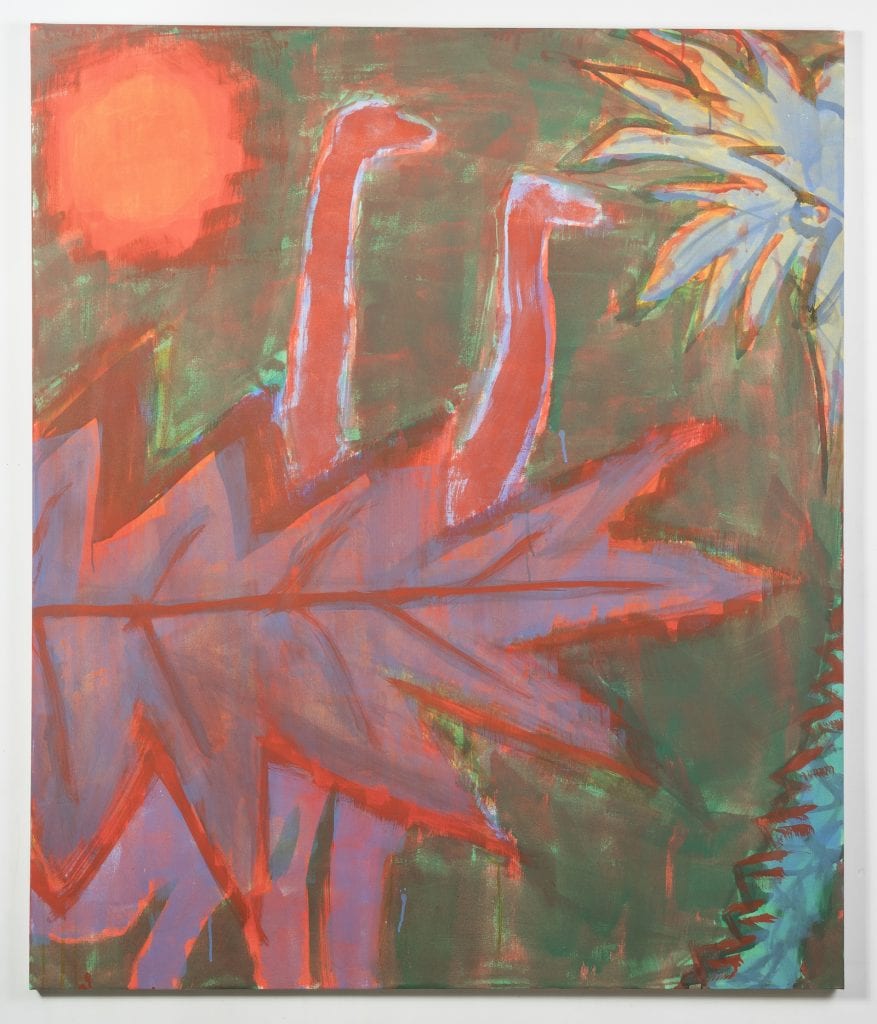 What is your process like? How does a work begin for you?

I usually visualize glimpses of paintings while doing completely mundane and unrelated things: on the subway, in the shower, walking. Then I try to bash the idea out in a marker drawing before I lose it. I work very slowly; paintings sit untouched for a while between being worked on again. Lately I’ve been experimenting with layering semi-transparent layers of acrylic that act more like layers of a screen print. I’ll mix a big batch of the color I want to use, then hit all the parts of the painting that need that color, then let it dry completely before applying the next color layer. Some of the paintings only use about five or six colors, but there is a lot of variation where the colors crossover. There’s a lot of pondering, and sometimes sketching it out on the side. But the part where I am actually painting is pretty fast and decisive. For some of my larger paintings, I try to maintain the scale and looseness of sketches that I work from by using giant brushes attached to poles that would be proportionate to the size of a marker to the size of the paper. I try to only paint when I am absolutely stoked to be painting. I won’t paint if I’m not 100% confident, any other state of mind leads to poor decisions. So I imagine that I probably paint a lot less often than most painters. A lot of my time in the studio is spent sketching or writing. 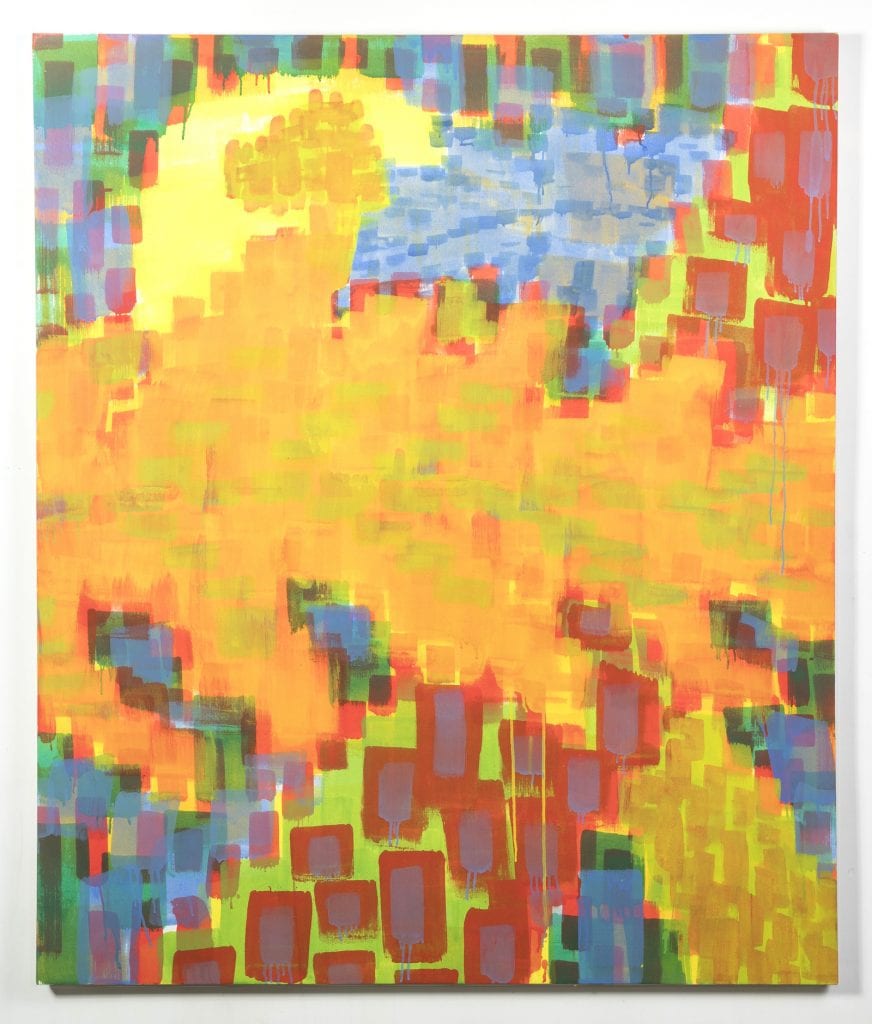 What are you most excited for this year?

I am probably most excited to see what my partner Paz Mallea makes this year. I helped her paint two murals she did last summer for bars in crown heights. She is an artist that is very versatile: a hilarious illustrator and screen printer with an in depth oil-painting practice that focuses on a specific abstract universe, which could be described as a cubist representation of the insides of tropical fruit, made with curvy lines as opposed to sharp straight lines. We just saw Shara Hughes’ most recent paintings shown at Rachel Uffner and flipped, Paz cried—it was beautiful. That’s a painter’s Painter. Very excited to see what Shara Hughes does next. Eliot Greenwald designed a shelf this year that is both an optical illusion and feat of balance, very excited about that, especially because he is bridging the gap between functional design and art objects in the most unique way I’ve ever seen.

Upcoming art I’m really excited to see:
Jonny Paul Gillette’s next series of paintings, Drew Miller’s newest work, Debbi Kenote’s show after she gets back from her residency in Iceland, new furniture by Alicia Adamerovich, new Avery Singer paintings, new furniture from Andrew Algier, and my friend Hannah Cweik’s PDF projects, which is to be a mobile curatorial project. I know I’m forgetting so many things want to mention here.

There’s some good music due to be out this year by a friend of mine called Mystic Wool. Also I’m very excited to be part of my friends music project called Blisspoint, we’ve got some recording in the pipeline as well. Hoping to see something come out this year from a Portland Band called Bruise, of which two of the members I used to have a band with.